One of the most influential American artists of the last half-century and a leading figure of contemporary figurative painting, Alex Katz presents a new series of eleven large-scale portraits in a focused solo exhibition titled The White Coat. 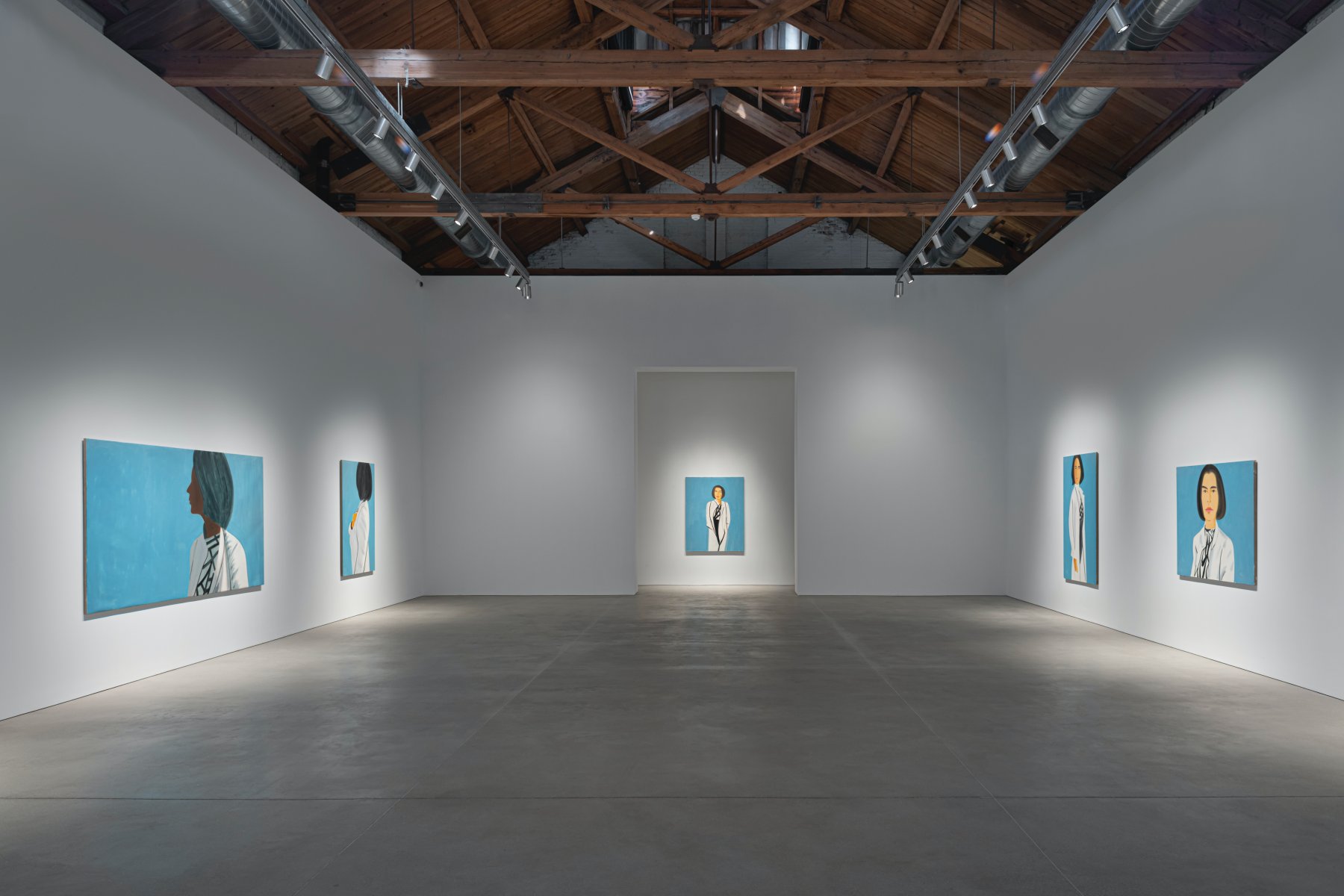 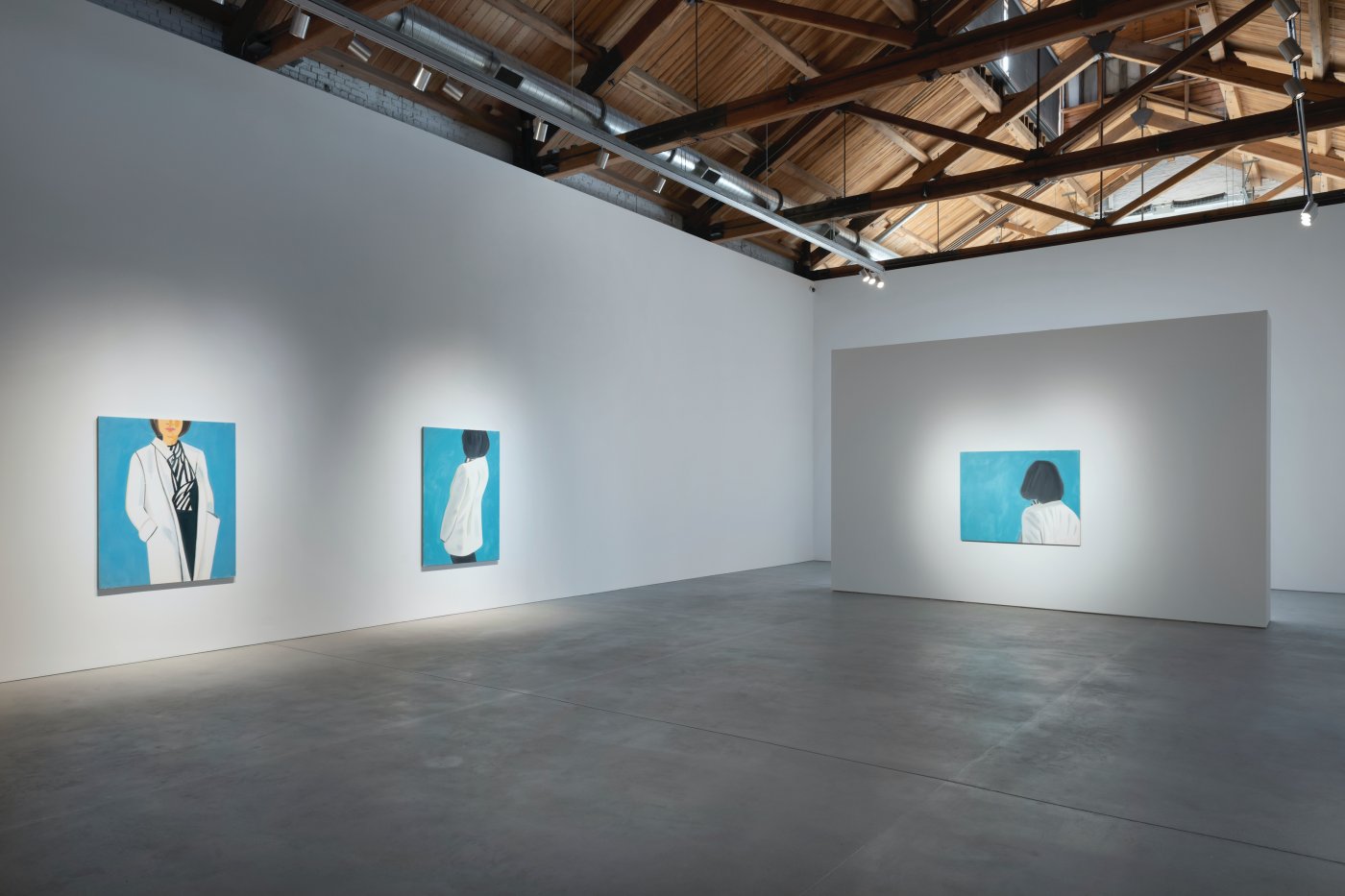 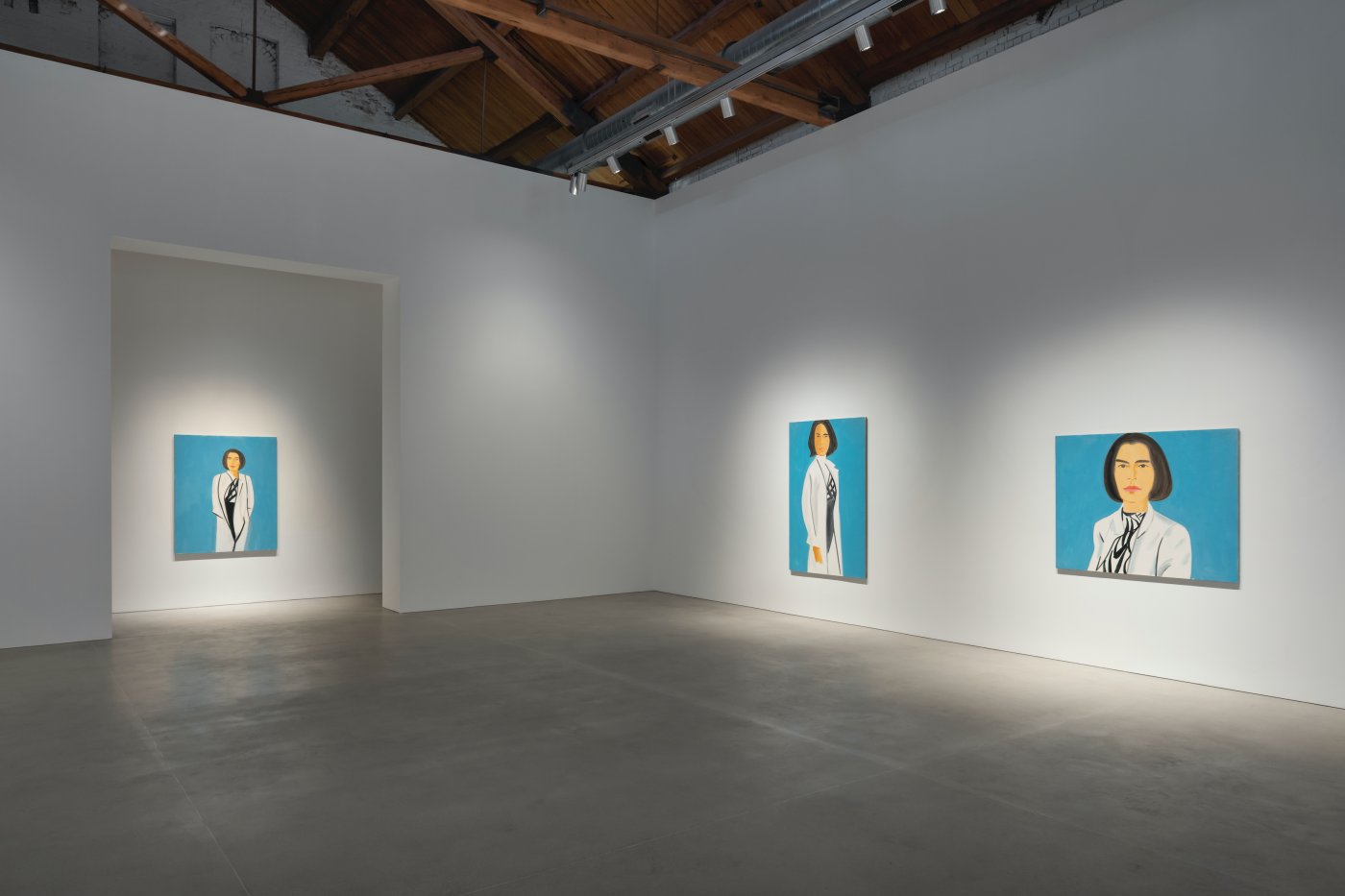 Created between 2020 and 2021, Katz’s White Coat paintings are based on the likeness of Vivien Bittencourt, a photographer and filmmaker, and the artist’s daughter-in-law. Across these eleven portraits, Katz paints Vivien in a variety of dynamic compositions unified by a brilliant light blue ground color. With a discerning eye for color, form, and economy of line, Katz upholds the immediacy of portraiture while balancing the specific and abstract, intimate and remote, geometric and gestural. Katz’s ongoing endeavor to capture fleeting moments in time manifests in this series as a sequence of snapshot-like images. In Vivien in White Coat 1-11, Katz choreographs each composition as if painted in rapid succession. Yet, despite their seriality, Vivien retains an air of mystery in each canvas, turning towards and away from the viewer in a state of perpetual motion. Writer and curator Jan Verwoert, in the text he authored for the accompanying publication, observes: “Vivien looks you in the eye and stands firmly. But still she will not stand for long. The folds and ripples in the white coat she wears give clues to the fact that she may prefer to stay in motion. As do the freely interlacing patterns of black lines on the blouse she put on under the coat. Vivien looks around, turns, and is on her way.” Producing familiarity through repetition, Katz’s practice of painting subjects with whom he holds close personal relationships would seem to invite viewers into an intimate and ethereal space. At the same time, Katz is careful to preserve his subject’s identity at a safe distance. As Verwoert observes, “The face, name, and presence may be rendered familiar by the paintings. But at no point do they invite incursions into the life of the portrayed. Katz refrains from laying life bare to a mode of reading that would overstep boundaries, penetrate and dissect a subject. He does so consistently, and strikingly, regardless of whether he introduces you to a human being, family of trees, or landscape… So it’s not like he blocks readings. He simply does not bait the invasive gaze. Rather than embolden viewers to insinuate themselves into works and rashly read between lines, Katz will choose to paint very few… [Katz] paints a big yes to the power of the face to speak of life, but a distinctive no to psychological carnivores getting their fill. He gives you the look, not the scoop.” FORTHCOMING PUBLICATION To accompany the exhibition, Gray is pleased to release the forthcoming publication, Alex Katz: The White Coat. This in-depth volume features the essay, “Paint Somebody Like You Would Call Them By Name,” authored for the exhibition by renowned curator and writer Jan Verwoert. The catalogue additionally includes 33 color illustrations with detailed spreads, as well as the artist’s biography. Published by Gray, Alex Katz: The White Coat follows the related publications, Alex Katz: Grass and Trees and Alex Katz: Flowers. ABOUT ALEX KATZ Alex Katz (American, b.1927) is one of the most recognized and widely-exhibited artists of his generation. Often associated with the Pop Art movement, Katz began exhibiting his work in 1954, and since that time he has produced a celebrated body of work that includes paintings, drawings, sculpture, and prints. His earliest work took inspiration from various aspects of mid-century American culture and society, including television, film, and advertising. Known for creating large works with a bold simplicity and heightened color palette, Katz created what art historian Robert Storr called “a new and distinctive type of realism in American art which combines aspects of both abstraction and representation.” Since the 1950s, Alex Katz’s work has been the subject of more than 200 solo exhibitions and nearly 500 group exhibitions around the world. His work can be found in nearly 100 public collections worldwide, including the Art Institute of Chicago; the Hirshhorn Museum and Sculpture Garden at the Smithsonian Institution, Washington, DC; the Metropolitan Museum of Art, New York; Centre Georges Pompidou, Paris; Museo Nacional Centro de Arte Reina Sofía, Madrid; the Museum of Fine Arts, Boston; the Museum of Modern Art, New York; the National Gallery of Art, Washington, DC; the National Museum of American Art, Smithsonian Institute, Washington, DC; the Philadelphia Museum of Art; The Tate Gallery, London; and the Whitney Museum of American Art, New York, among many others. Alex Katz will be the subject of an upcoming career retrospective at the Solomon R. Guggenheim Museum in New York City, opening in 2023.

Courtesy of the artist and Gray