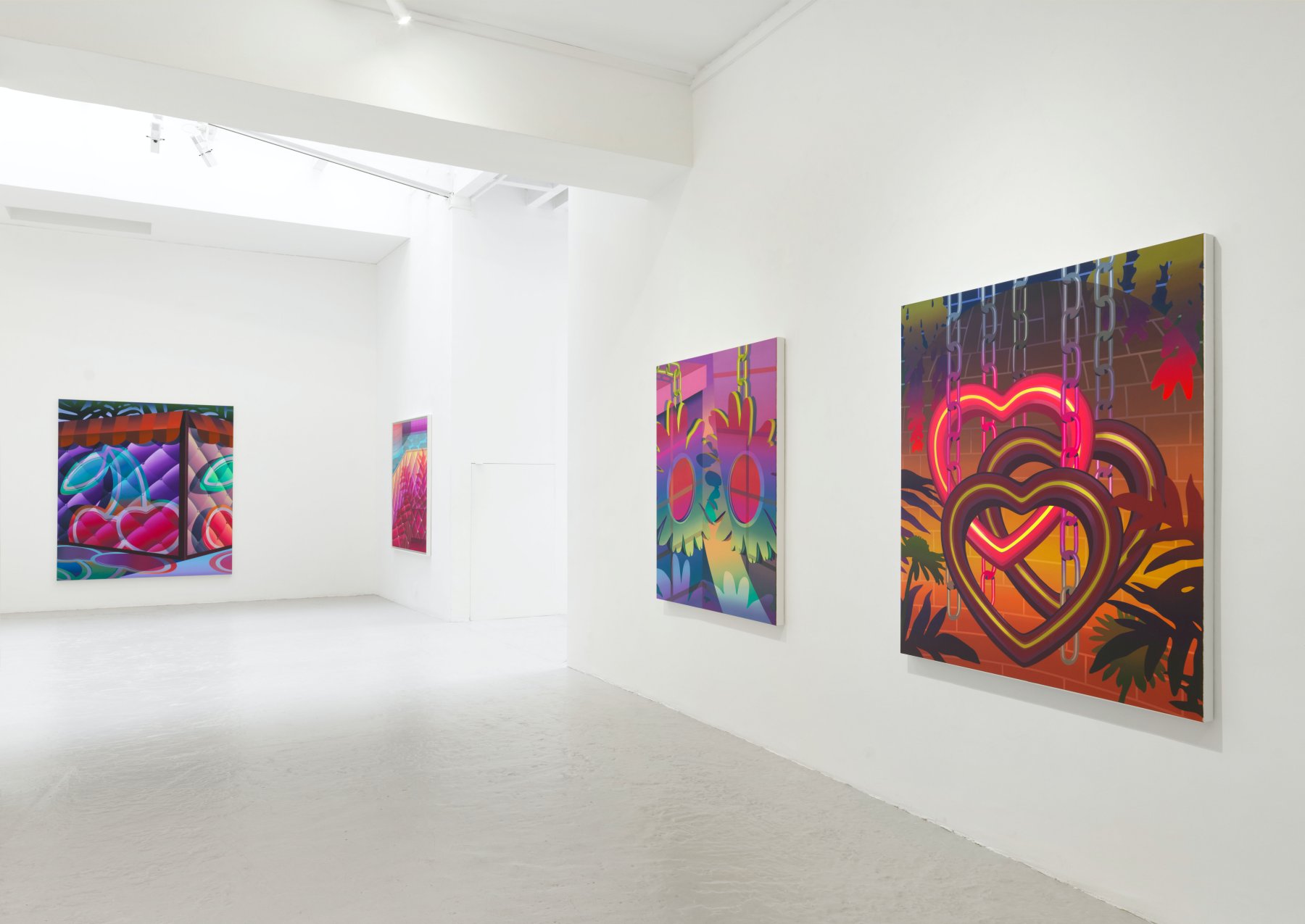 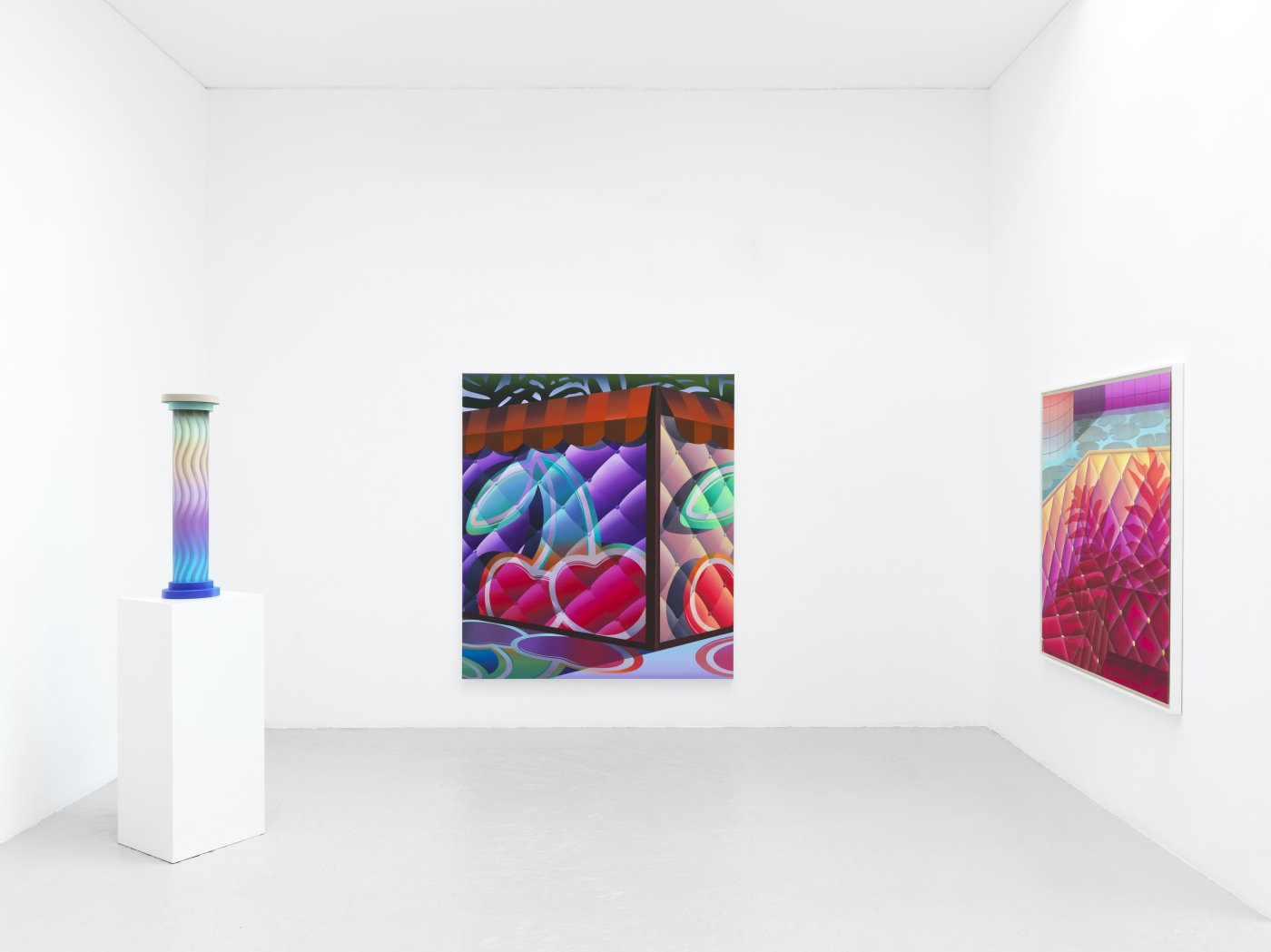 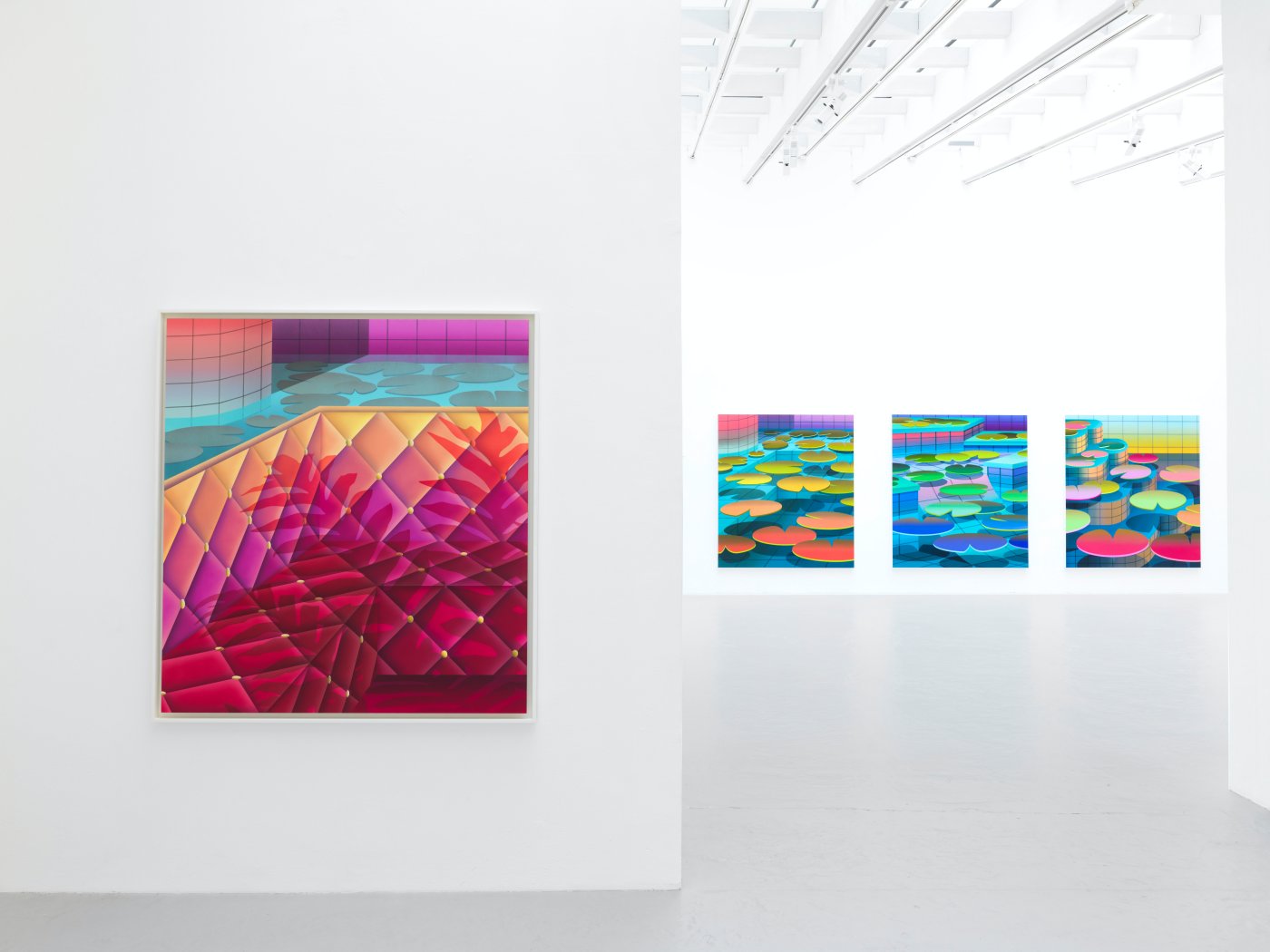 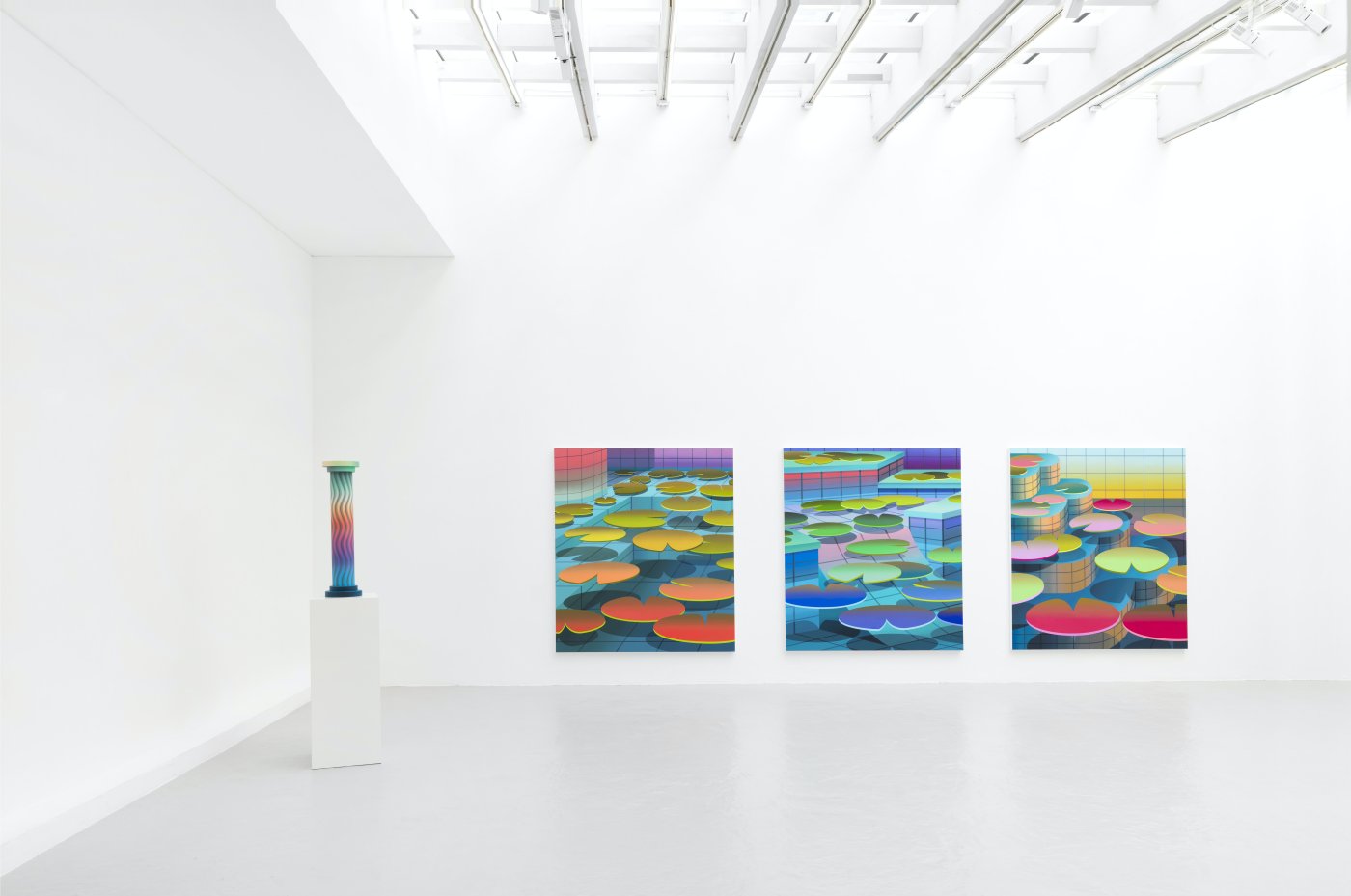 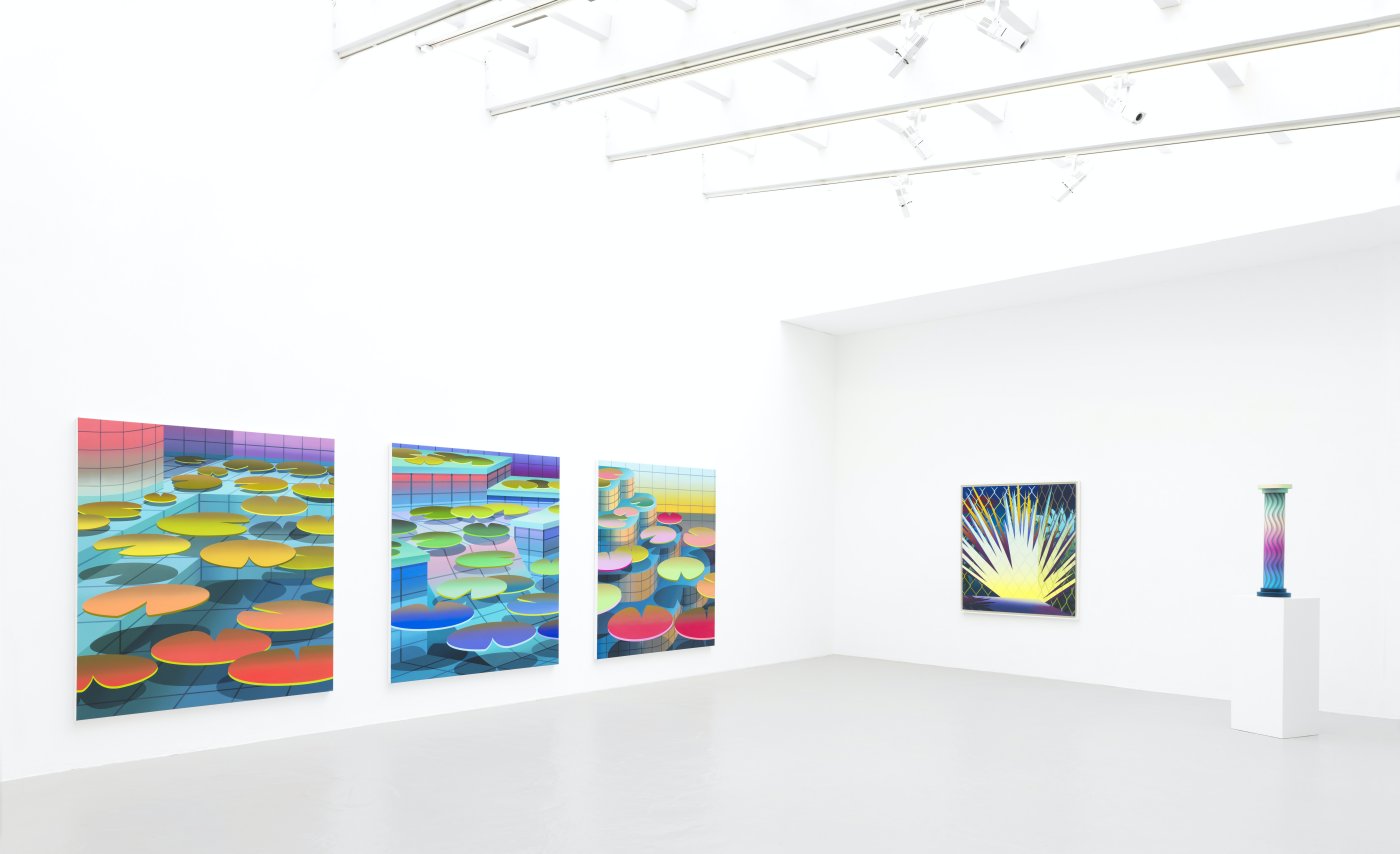 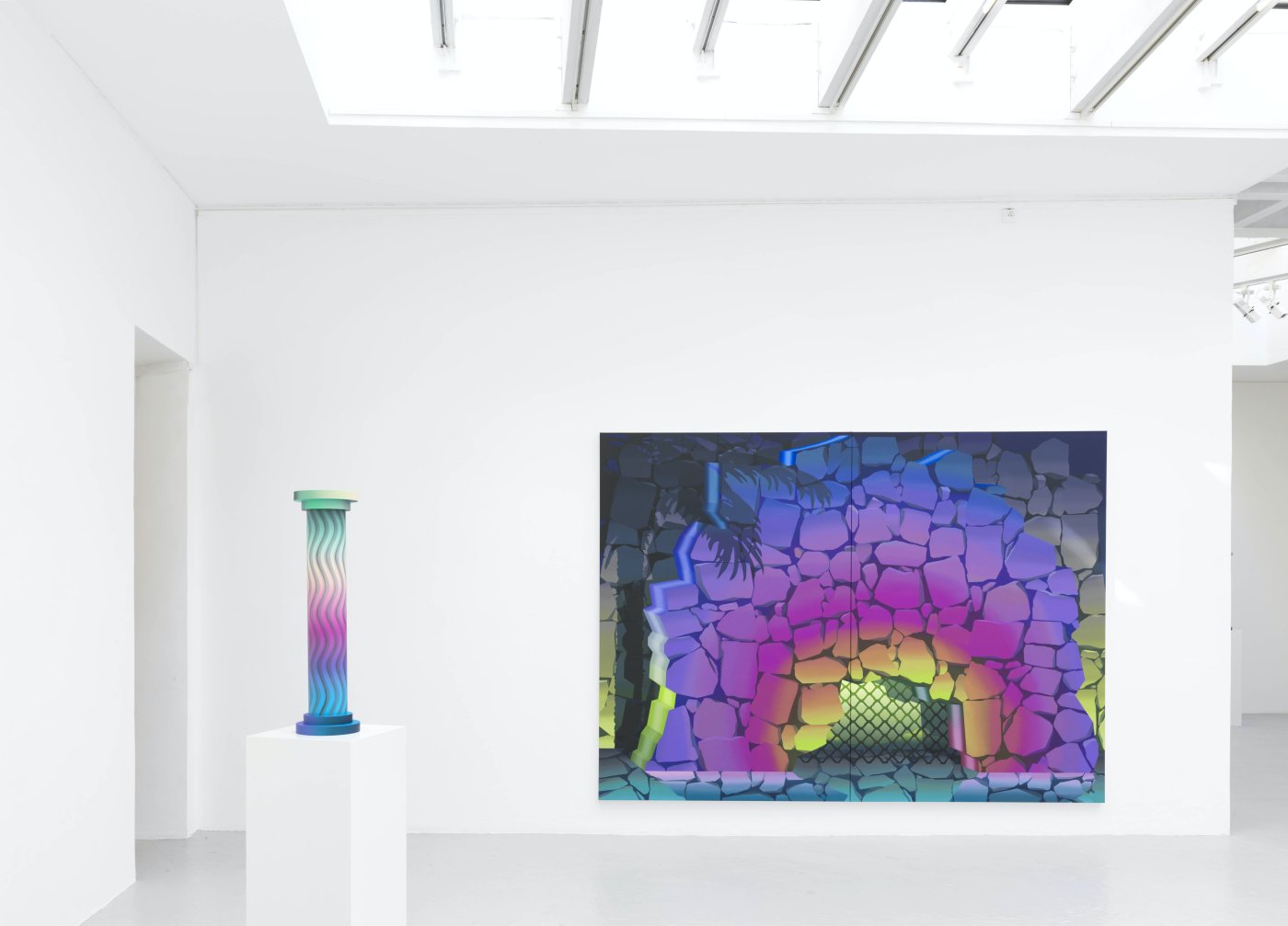 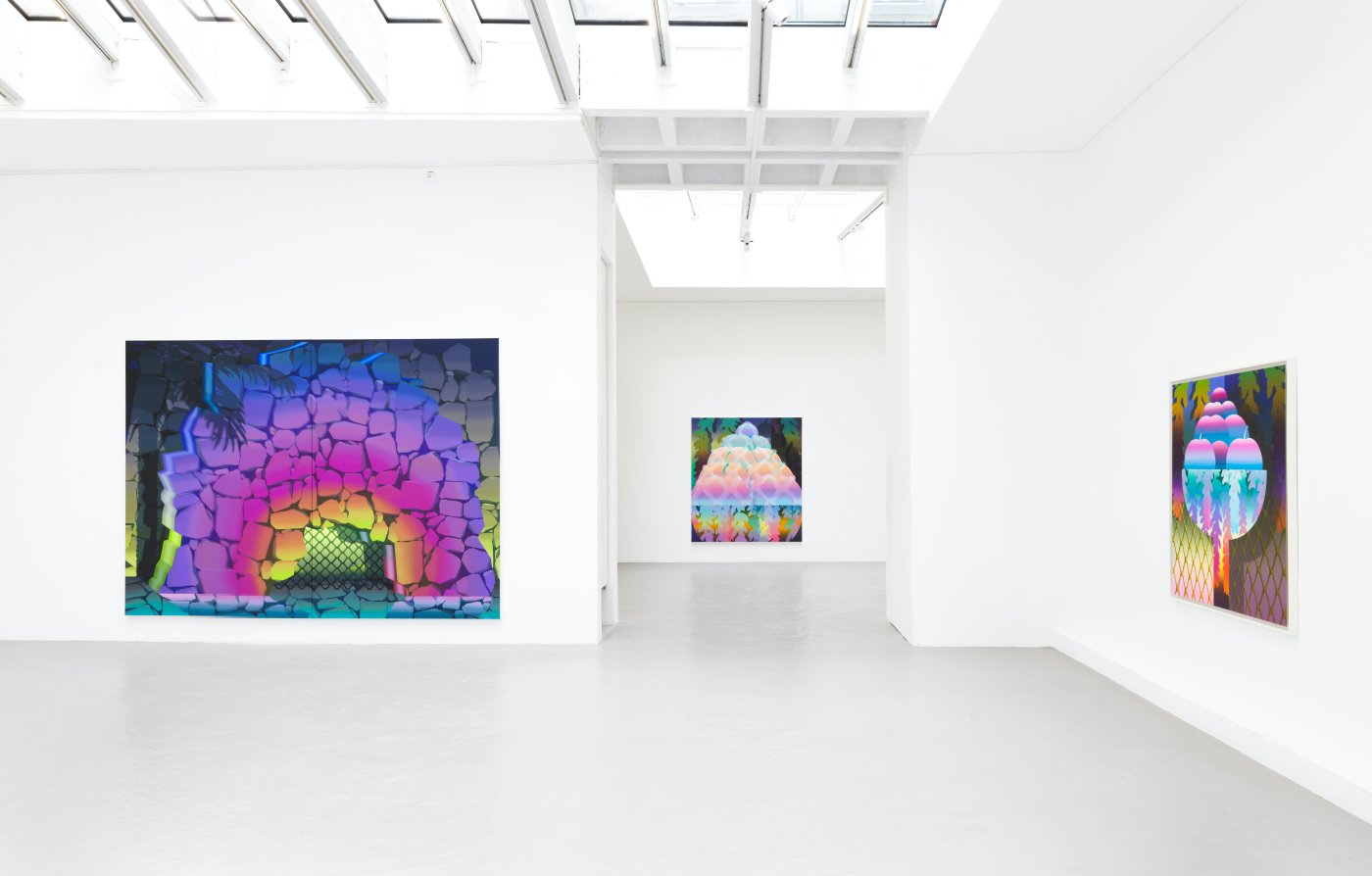 The idea of “California” exists, apart from the actual place, as a commercially constructed vision collectively held across the world. The Los Angeles-inflected mythology of a temperate, permanently sunny climate of palm trees and beaches suggests an aspirational lifestyle that is used to peddle all kinds of goods. Amélie Bertrand examines the trappings of the Californian idyll—including its color gradients, tropical foliage, and the clean modernist lines of its architecture. Her works begin on the computer, in the virtual space where such imagery circulates. She uses programs like Photoshop and InDesign to painstakingly construct the echo chamber in which these motifs reverberate, becoming refracted ever so slightly each time they circulate and are transposed into new contexts, such as that of Paris, where she lives and works. This gives rise to the simultaneously seductive and sinister qualities that numerous critics have identified in Bertrand’s works.

In her paintings, especially the recent ones, we see tropes of the Californian imaginary parsed out and isolated for our consideration. Her works are constructed from an array of planar surfaces onto and into which imagery is embedded in an ambiguous fashion. For example, in Candyshop (2021) meticulously rendered cherries—stylized like those we might find on a slot machine or candy wrapper—float as if both on and in padded, upholstery-like fields. These fields fill the windows of the building that we must presume is the “candy shop” of the title, blocking entry into it. They simultaneously advertise what we are supposed to desire and block access to it.

In other works tropical motifs are processed through this internationalized Californian vision. For example, Super-Cannes (2020) channels the South of France, not in its specificity, but via the gridded tiles, plastic flower necklaces, and generic palm fronds that today we expect to find near any beach the world over. As in other of Bertrand’s paintings, the spa-like architectural forms (which have also started to appear as sculptures) bulge out towards the viewer, crowding out the pictorial space. Images cling to these planes, trapped as if shadows passing across its surfaces, the chains of the flower necklaces flattened out across them as if pinning them down. In a series of paintings called The Swamp Invaders (2021), lily pads signal a possible retrenchment of nature in a man-made, pool-like space. This makes explicit the ecological implications, hinted at in other works, of this culture of the disposable and interchangeable.

In most of her paintings, surfaces function not only like screens, but also as mirrors. For example, in Candyshop the cherries can be found both in the shop windows and as if reflected on the ground around it, creating an ambiguity of whether these surfaces generate the images, or merely reflect them back from some outside source. Underscoring this is the perfectly finished quality of the painted surface. After being rendered on the computer it is painstakingly executed in oil—each plane of color delimited by scotch tape, so that there are no superimpositions or gradations—in a process that, consequently, can take weeks to complete. The sealed evenness of the surface references the seamlessness of the screen, while also harking back to the varnished finishes of the Old Masters, but without their glossy reflectivity.

The dichotomy of screen and mirror is a readily identifiable predicament of our contemporary world. For a long time now we have consciously lived in a world of signs, the question today is whether we have any agency in navigating them. Or if are we merely the passive recipients of what is delivered to us, selected by the relentless calculations of algorithms designed to turn our every desire and impulse into leverageable data. Bertrand’s work suggests how we might address the simultaneous attraction and repulsion of this dynamic, finding some space to reassert our agency, like the lily pads in The Swamp Invaders that have wrested back control of their aqueous world.

Alex Bacon is an art historian, curator, and publisher based in New York City. Until recently he was a Curatorial Associate at the Princeton University Art Museum, where he was involved with the University’s public art program and organized exhibitions at the Museum’s offsite space, Art@Bainbridge. He is cofounder of Circle Books, an imprint dedicated to research-based publications on the arts.