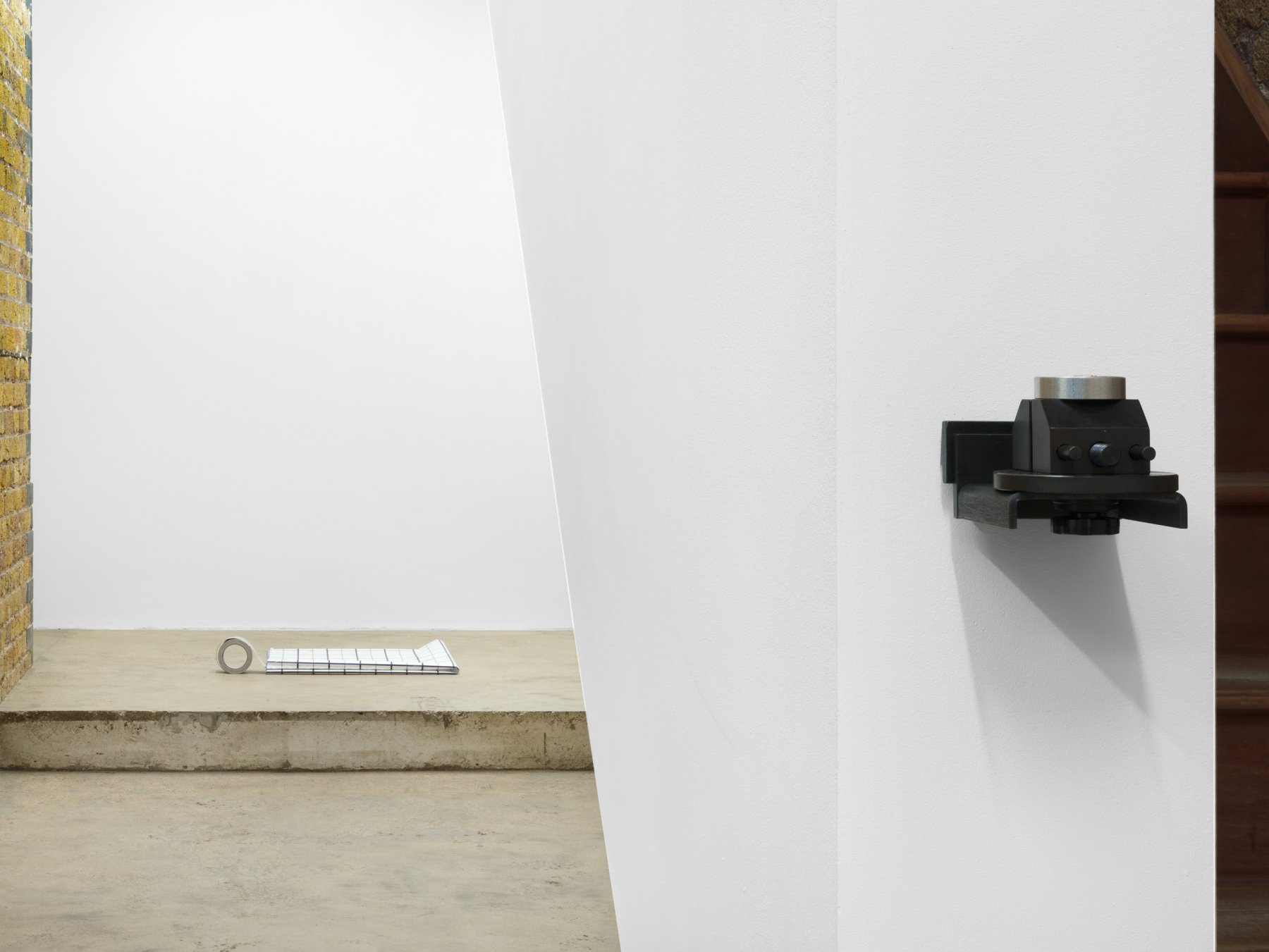 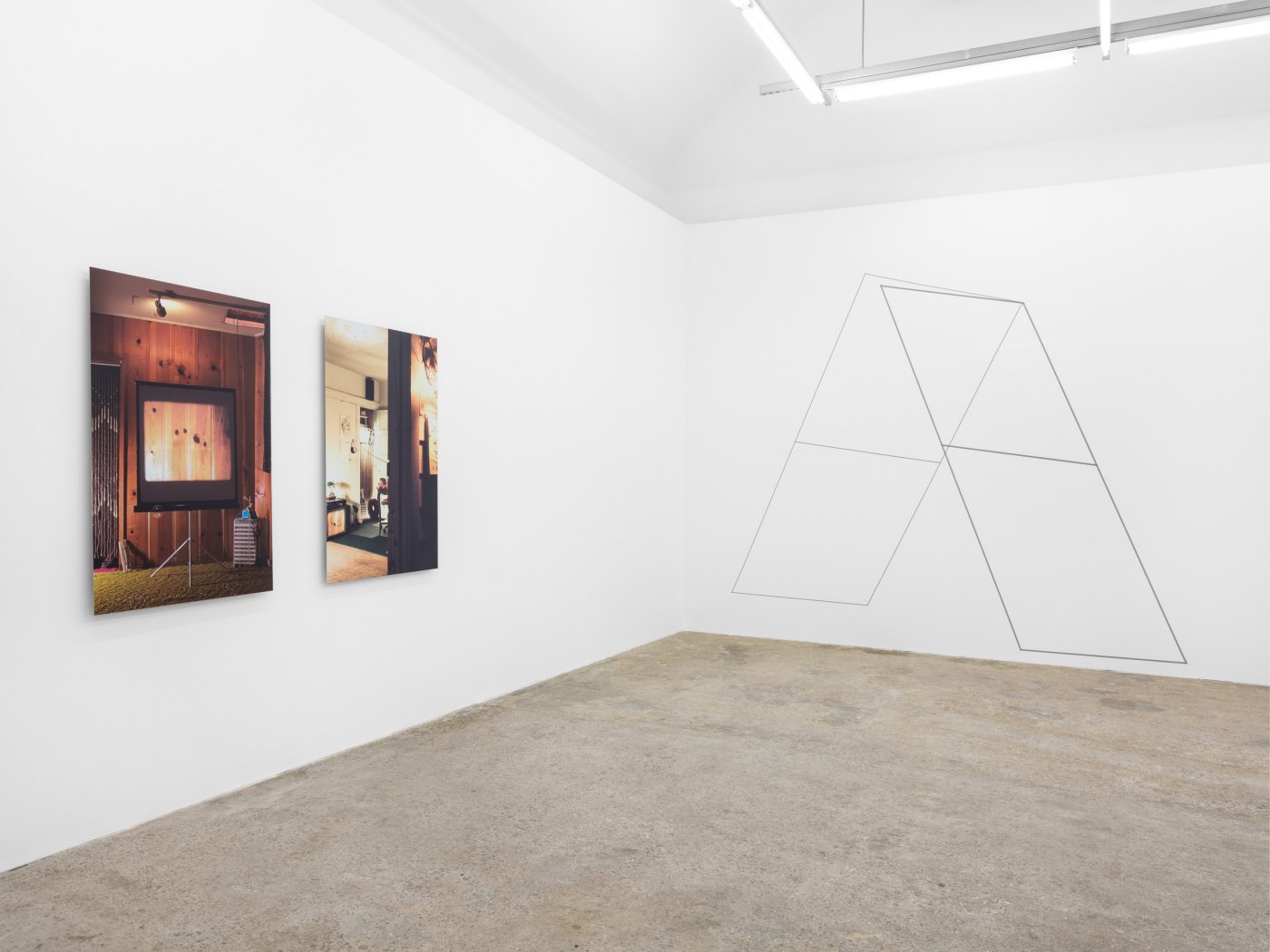 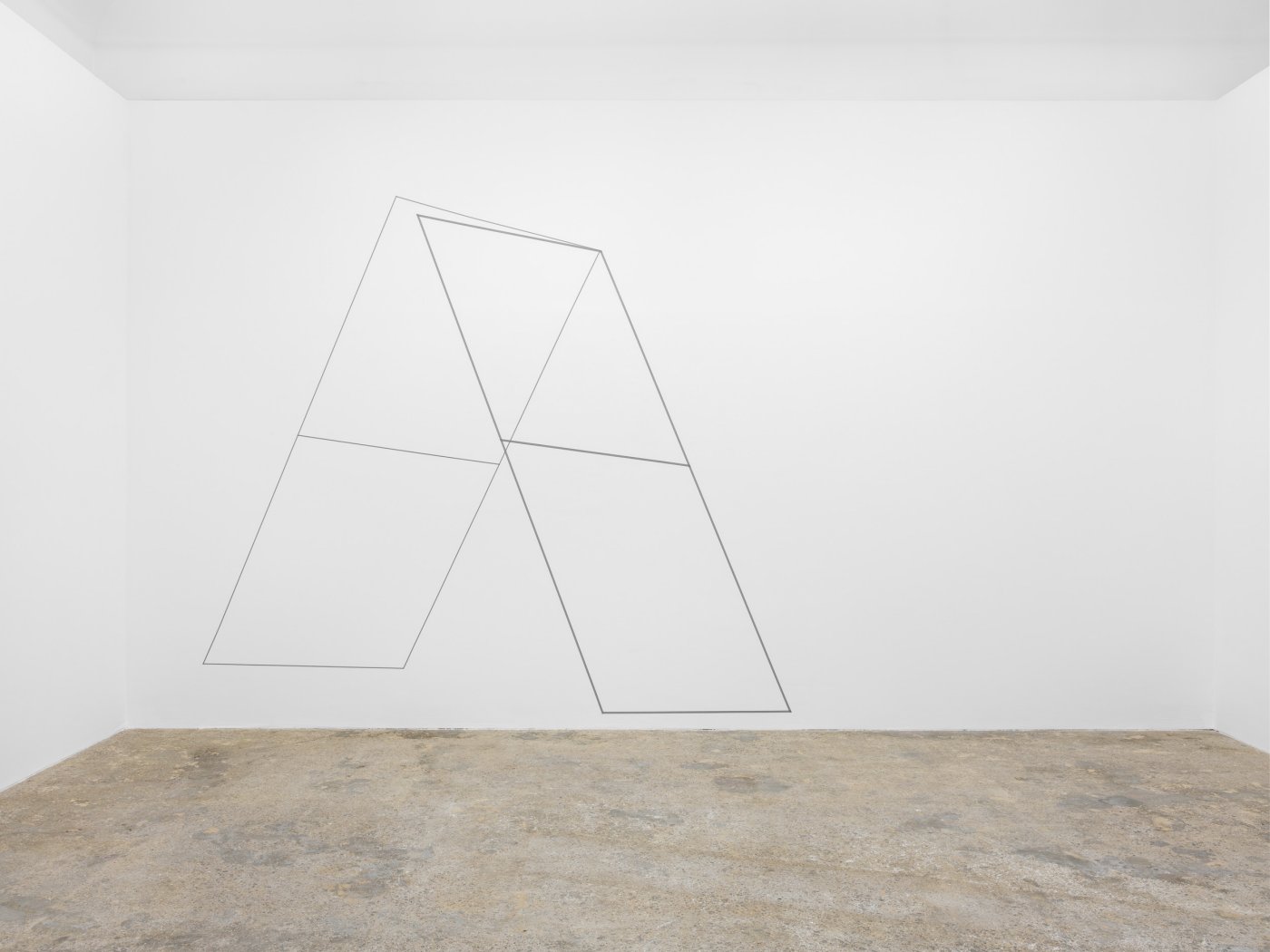 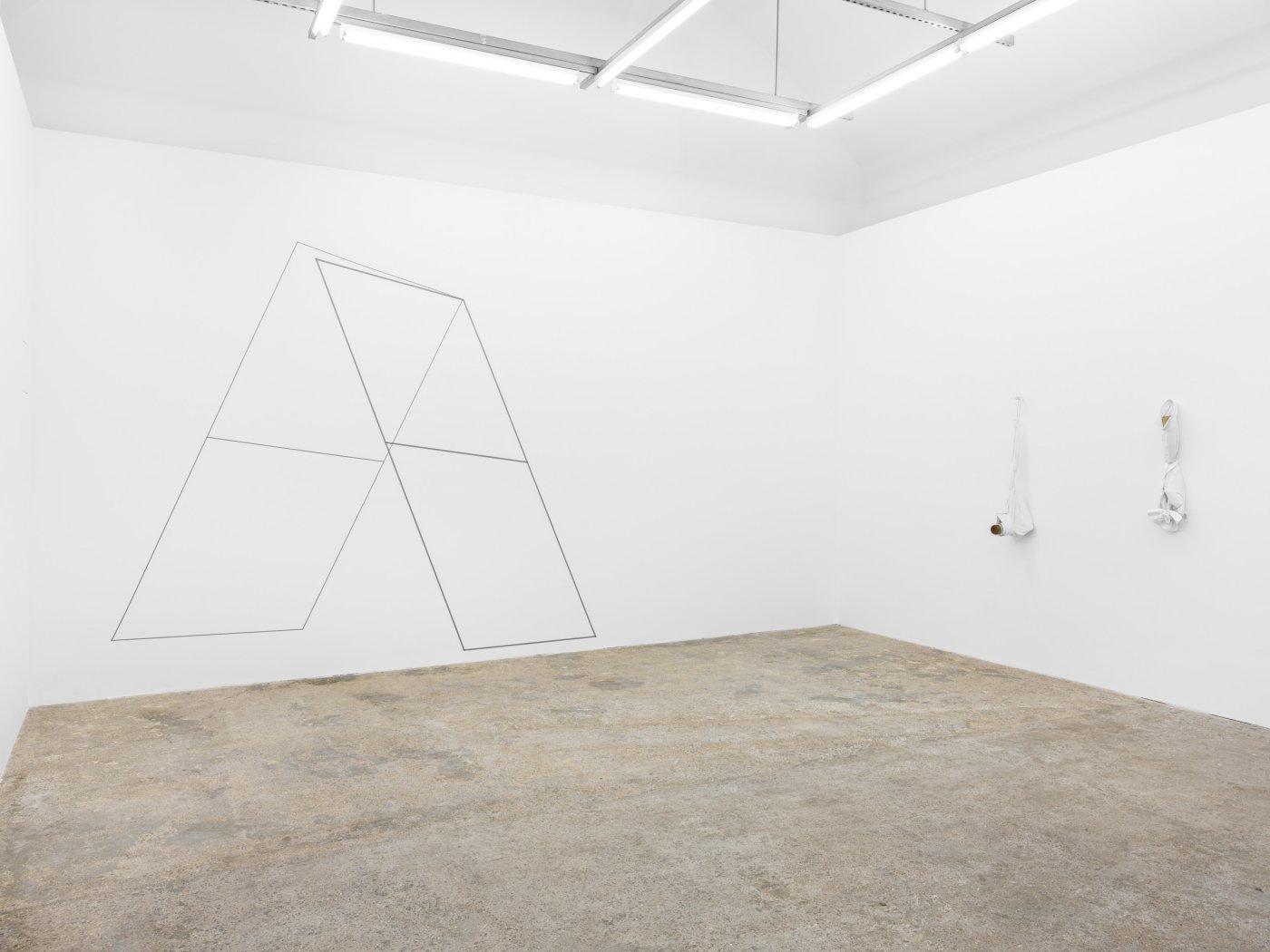 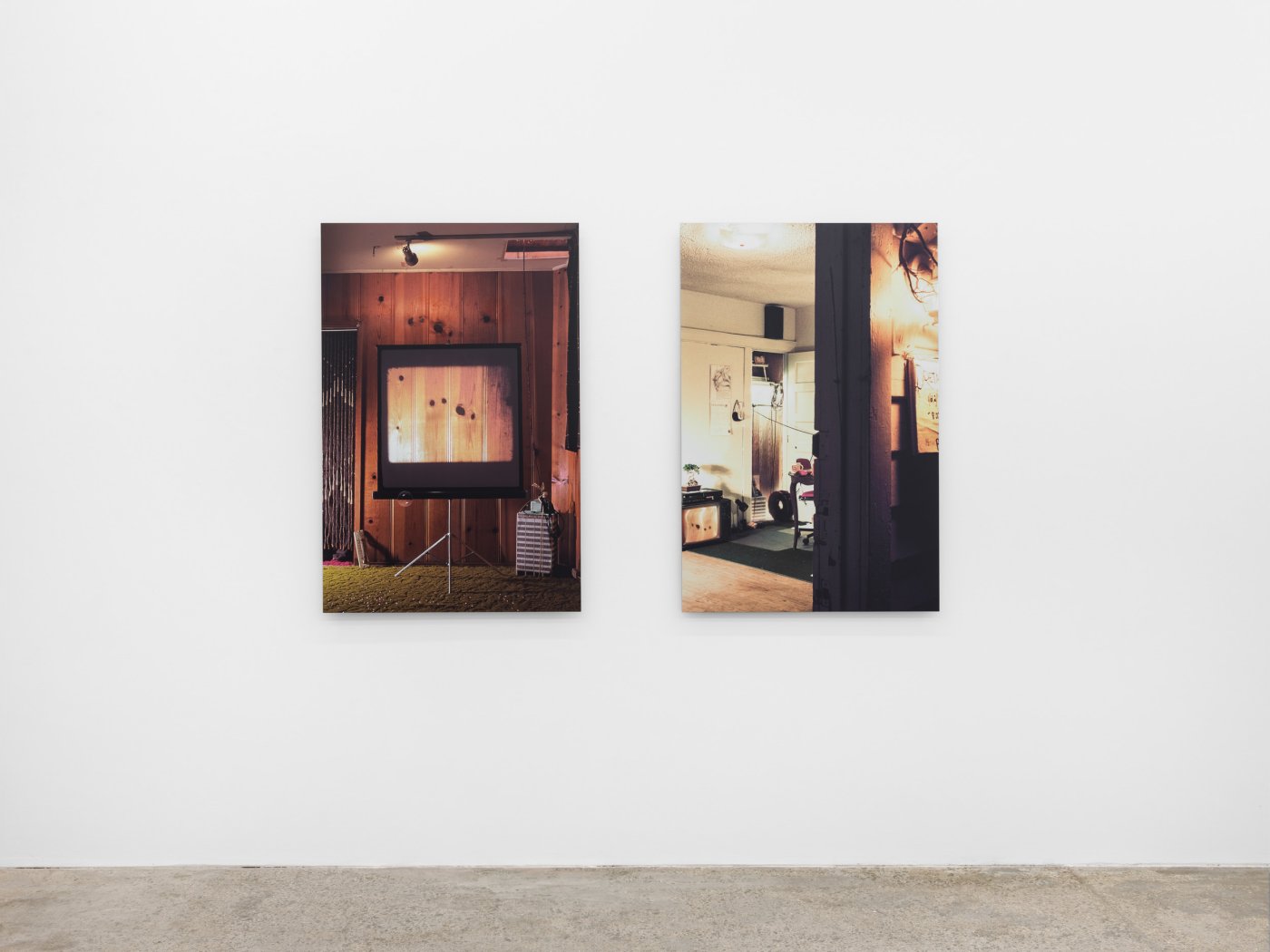 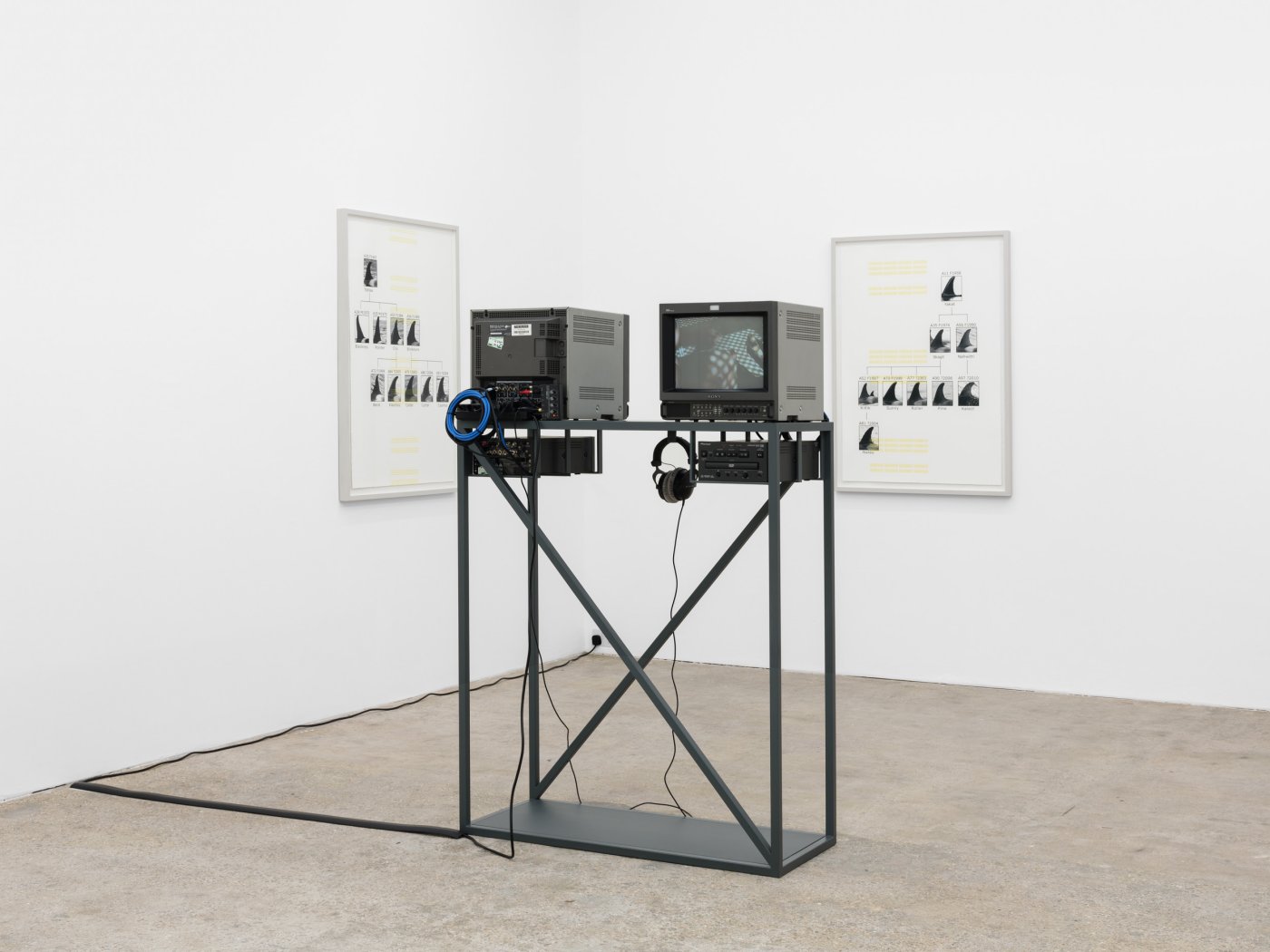 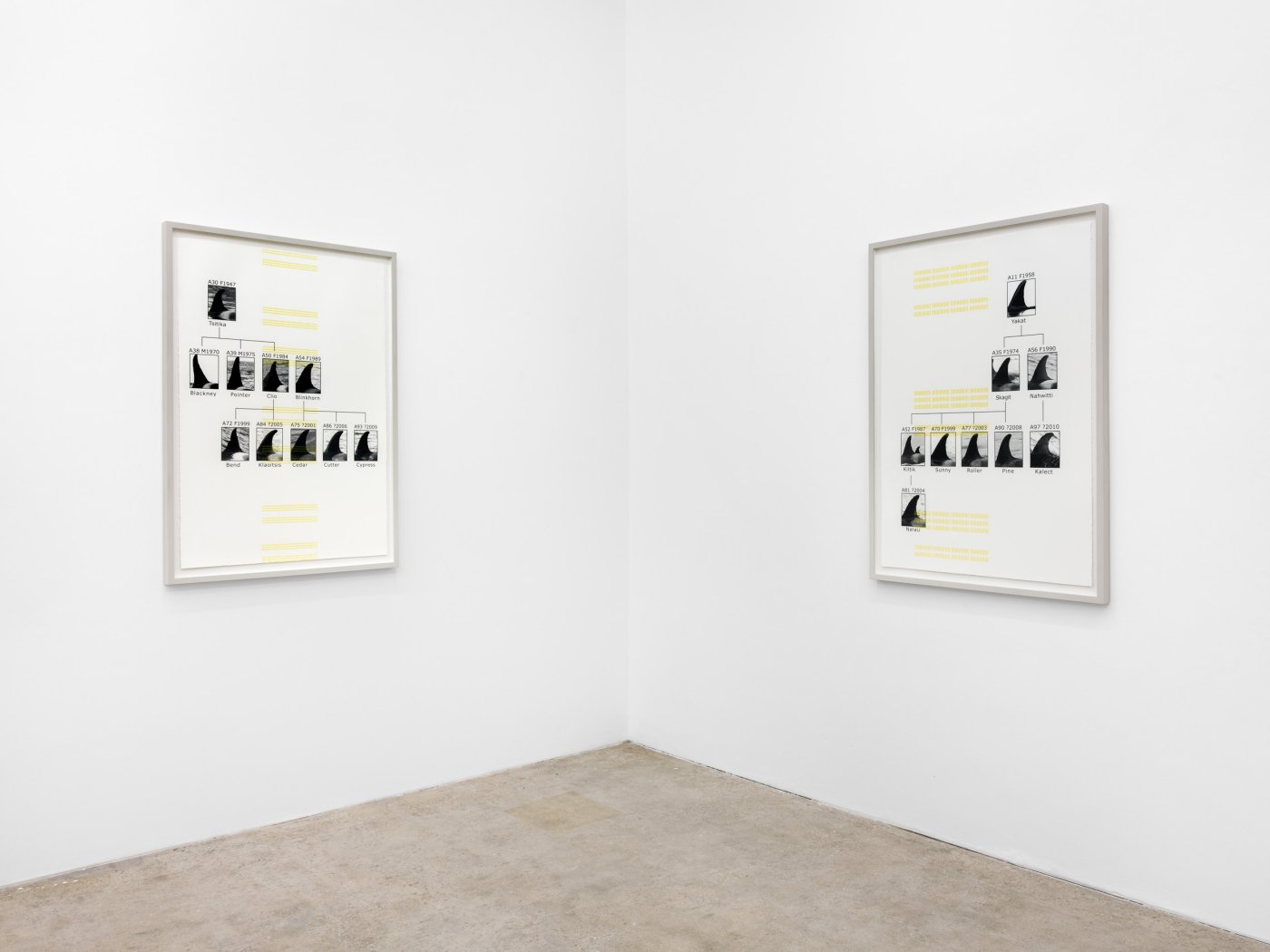 The reflections at work in An Insular Rococo vary from the formal and indexical to the contingent and atmospheric, encompassing direct encounters or traced afterlives. The sculptures of K.R.M. Mooney involve the exchange of spatial, temporal, and material bodies as an unstable site to reflect on notions of difference, embodiment and care. The autonomous works occupy interstitial positions within the gallery’s architecture. Citations (2021) recasts the base objectivity and intermediary operation of a kick plate by reorienting the object into a vertical position, as though extruding from the surface to which it is attached. The plate is laced in verdigris, a patina inherited from the large body of salt water of its original site at the Coastal Salish land near the Puget Sound. Mooney’s sensitivity to these material qualities includes the object’s use as a protective barrier, absorbing contact points and facilitating transitional movements at once. Through this subtle and alchemical denaturing of space, Mooney detects variances of material behaviour in lavish proximity. In Mooney’s Detrition (i) (2021) a specialised jewellers vice supports a fragment of silver couched in a tablet of delft sand. Affixed to the existing architecture, Detrition (i) becomes a formal extension of the gallery while containing its own material information.

Charlotte Prodger’s work explores affinities between the body, landscape, technology and time specifically through the lens of queer subjectivity. Forest Hills/Oregon Dacite (2015) features two identical monitors facing opposite directions. One monitor depicts the fetish of sneaker-slave subculture with a man repeatedly scraping his Adidas trainers against a slab of bedrock; the other features a ripped YouTube video by an amateur flintknapper who demonstrates the ancient process of whittling down a large rock to create a biface — a Paleolithic flint too. Prodger’s voiceover details the visually obscured flintknapping video; throughout these formal observations, Prodger recounts fragments of her autobiographical history that shaped the evolution of her identity. Forest Hills/Oregon Dacite forms a reading of time and space which parallels prehistoric, archived and geologic time within temporalities of language and eroticism. Prodger’s screen prints, Orca Matrilineal Pod Yakat and Orca Matrilineal Pod Tsitika (2016), use data and found imagery of matrilines compiled by marine biologists from orca pods off the coast of British Columbia. The biologists identify the orcas by their individual fins and their monochrome markings, as indexical objects. Prodger has overlaid the screen prints with ventilation hole patterns from specific monitor and DVD players. These ventilation holes ensure longevity of the machines by allowing them to breathe while also serving as a kind of thumbprint of identification for the device. The prints attest to Prodger’s compositing of time that meditates on formal, indexical and spatial particularities.

Jack O’Brien’s sculptures trace presences and afterlives of queer sociology by dilating loaded material into a malleable network of motifs. As an archetypal symbol of late capitalism, the white shirt is altogether framework, variously elongated and fastened. As a formal container punctuated by lenses, the shirt holes turn into false invitations for the voyeur. This porosity, immured within a shell of late capitalist power, correlates to inherent tensions between condition and individuation, structure and essence. The orifice, lens or aperture in O’Brien’s sculptures become potential punctuations, viewfinders or glory holes — vestiges which ornament or underpin realms of visibility.

Using everyday materials, Anne Tallentire scrutinises lived structures to consider conditions of habitation and displacement in societies. Tallentire destabilises a politics of spatiality through methodical gestures such as mapping, translation or deconstruction, where analytic assembly retains poetic specificity, often revealing the intimate patterns which inform social and sensory experience. Tallentire’s Fence (2021) is a schematic drawing of an upturned fence in masking tape, based on a photograph taken during a research visit in Belfast. Fence acknowledges creative agency at the edges of public life and continues Tallentire’s attention to a phenomenology of provisional infrastructure. Tallentire’s wall drawing is accompanied by a floor-work from her Turn series (2016). This series comprises industrial materials of film fabric and gaffer tape to mediate on qualities of coverage, impermanence and shelter through gestures of folding and securing.

The work of Julie Becker is informed by the material circumstances, cinematic qualities and psychological apprehensions of her home city, Los Angeles. Through a diverse body of work including video, installations, sculpture, drawings and photographs, Becker mused on the dark mythology of the late 20th-century American dream, creating charged articulations of spaces brimming with psychological import, fantastical refuge and escape. In 1999, Becker began working on the open-ended series Whole, which centred on the Echo Park building where she lived — a bungalow owned by the California Federal Bank. Becker occupied the space at a reduced rent in exchange for clearing out the remaining belongings of a previous tenant, who died of AIDS. Instead, Becker created a collection of works around the former occupant’s belongings, with the building functioning as both studio and stage for a series of photographs. The social and economic precarity witnessed and experienced by Becker informed her urban imaginary, entangling the mythic, psychic and material. Approaching the basement as a ‘metaphysical-conceptual lab’, Becker cut a hole in her living room floor to the basement where the previous occupant had lived, manifesting the apartment as a portal.