David Zwirner presents Joy Revision, an exhibition of work by Andra Ursuţa (b. 1979). This is the Romanian-born, New York–based artist’s second solo presentation with the gallery. The exhibition debuts new photograms and lead-crystal sculptures that stem from a premodern conception of art as an essential tool to deal with mortality, loss, and grief. 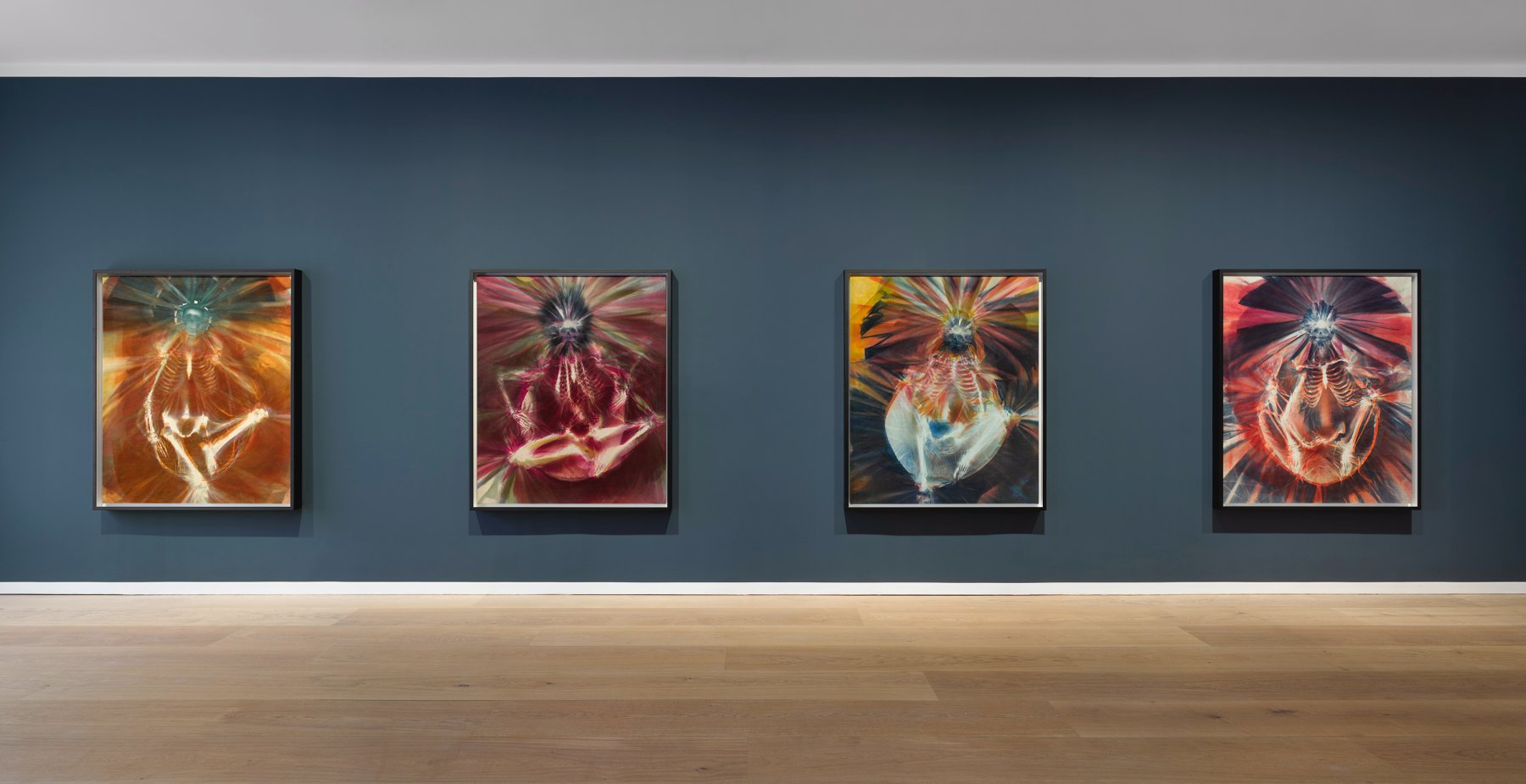 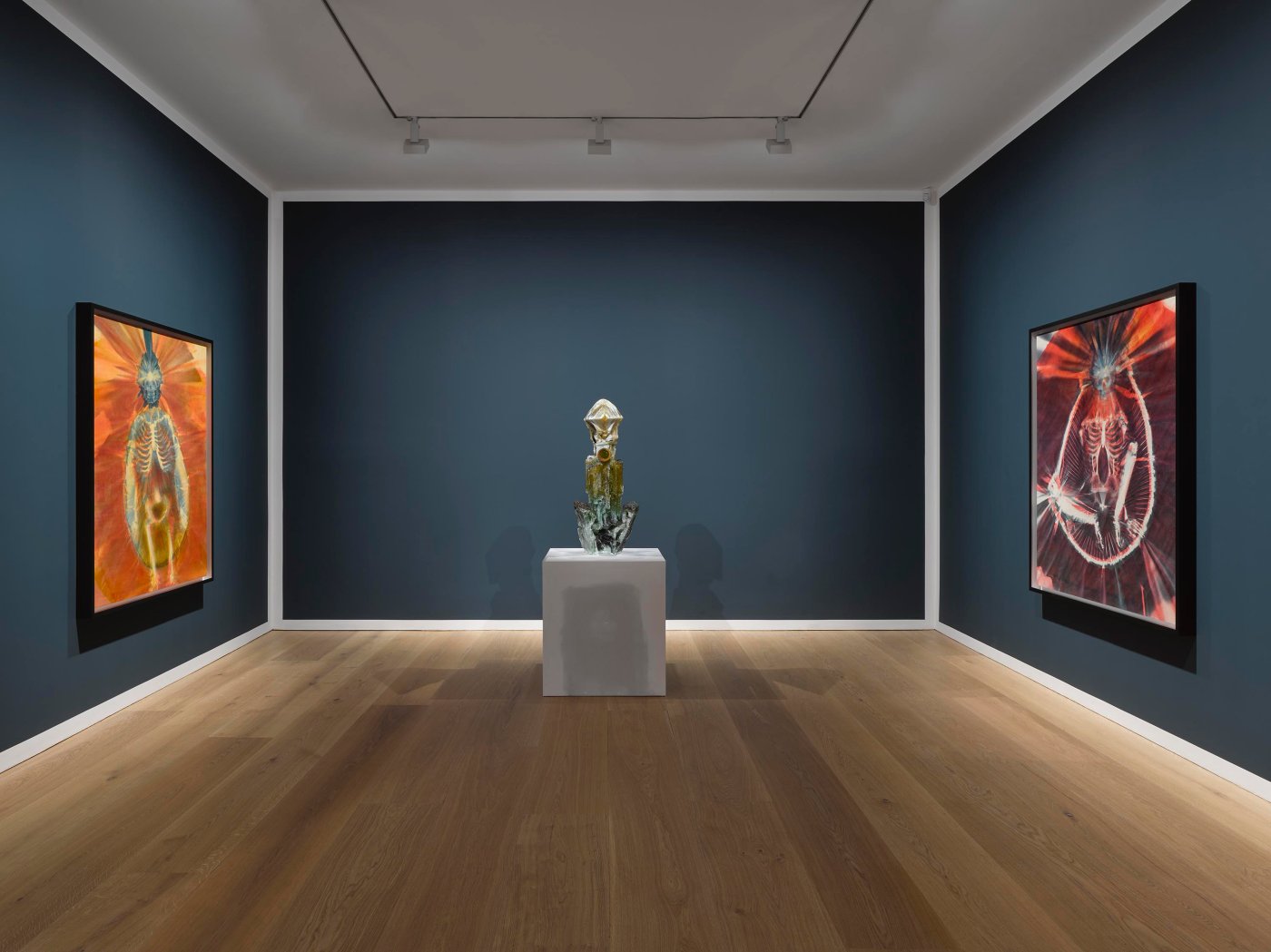 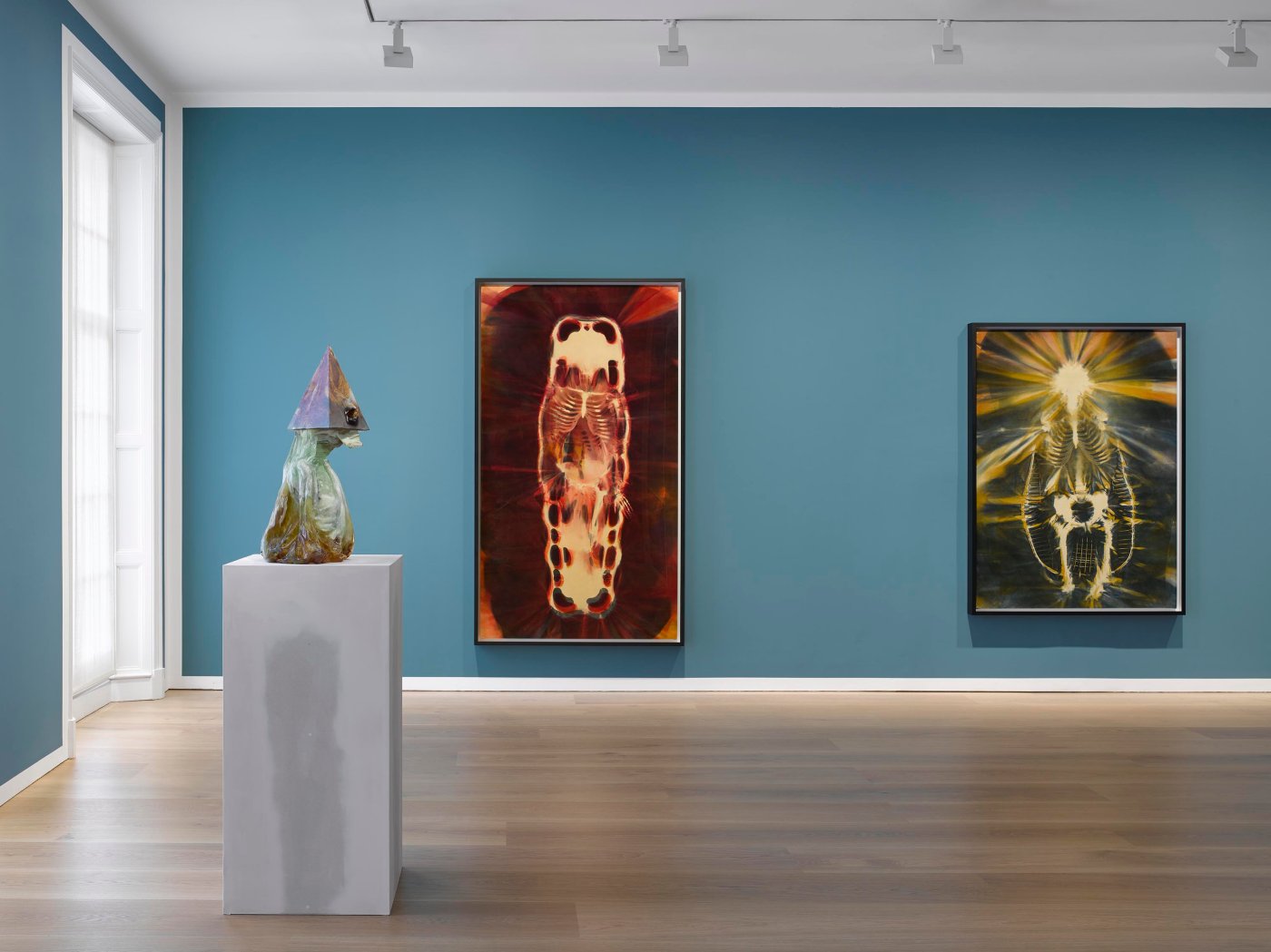 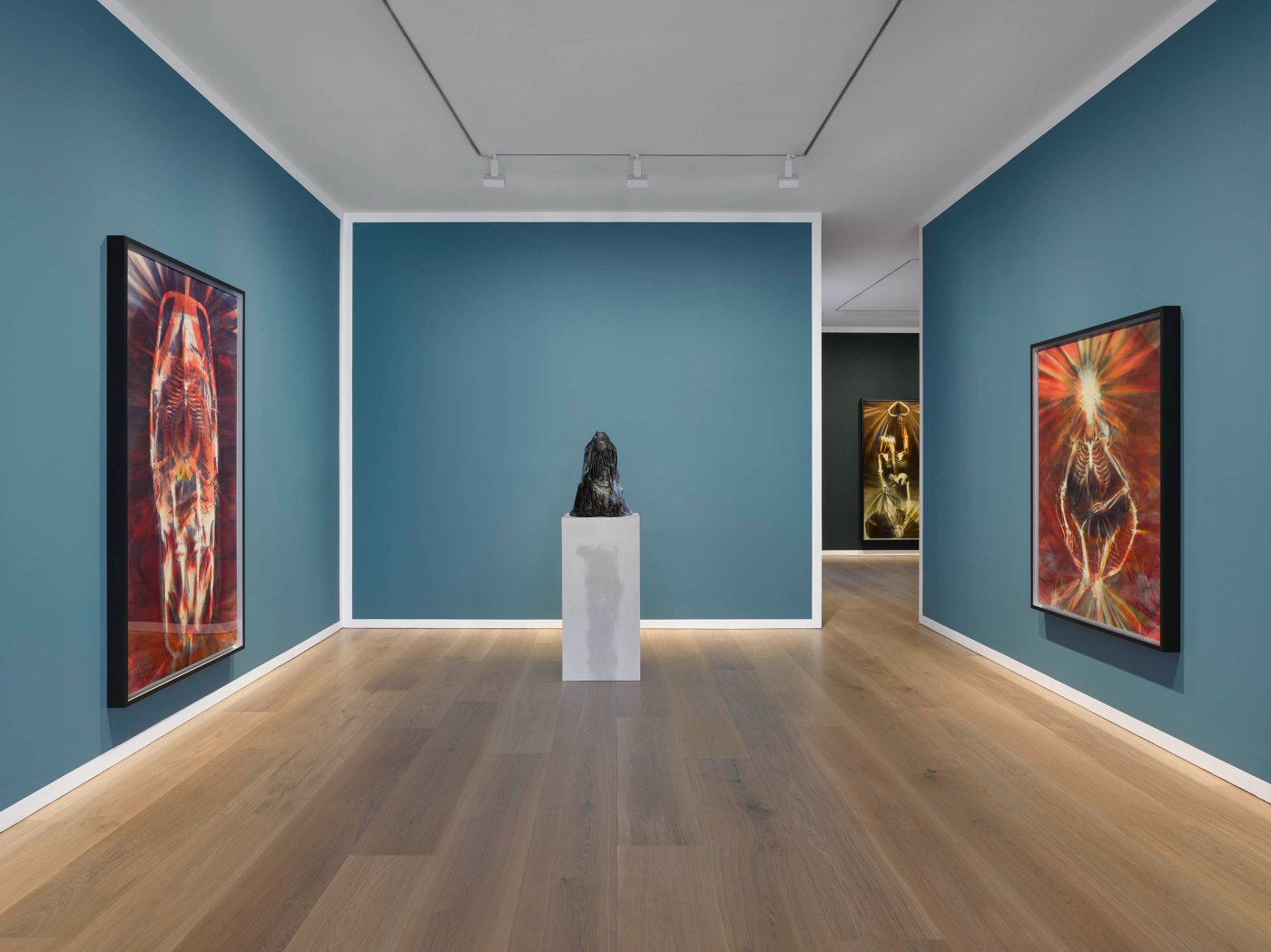 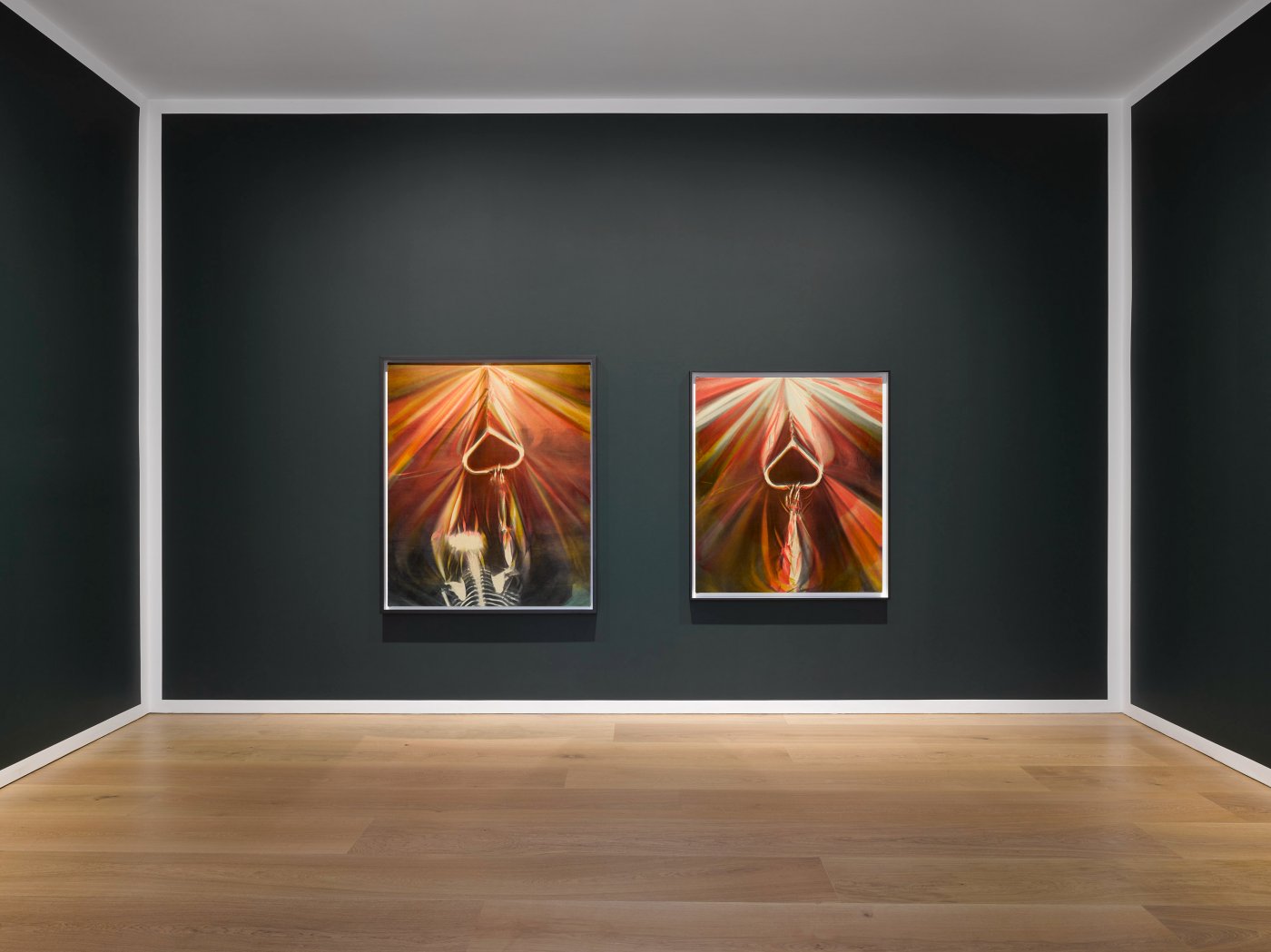 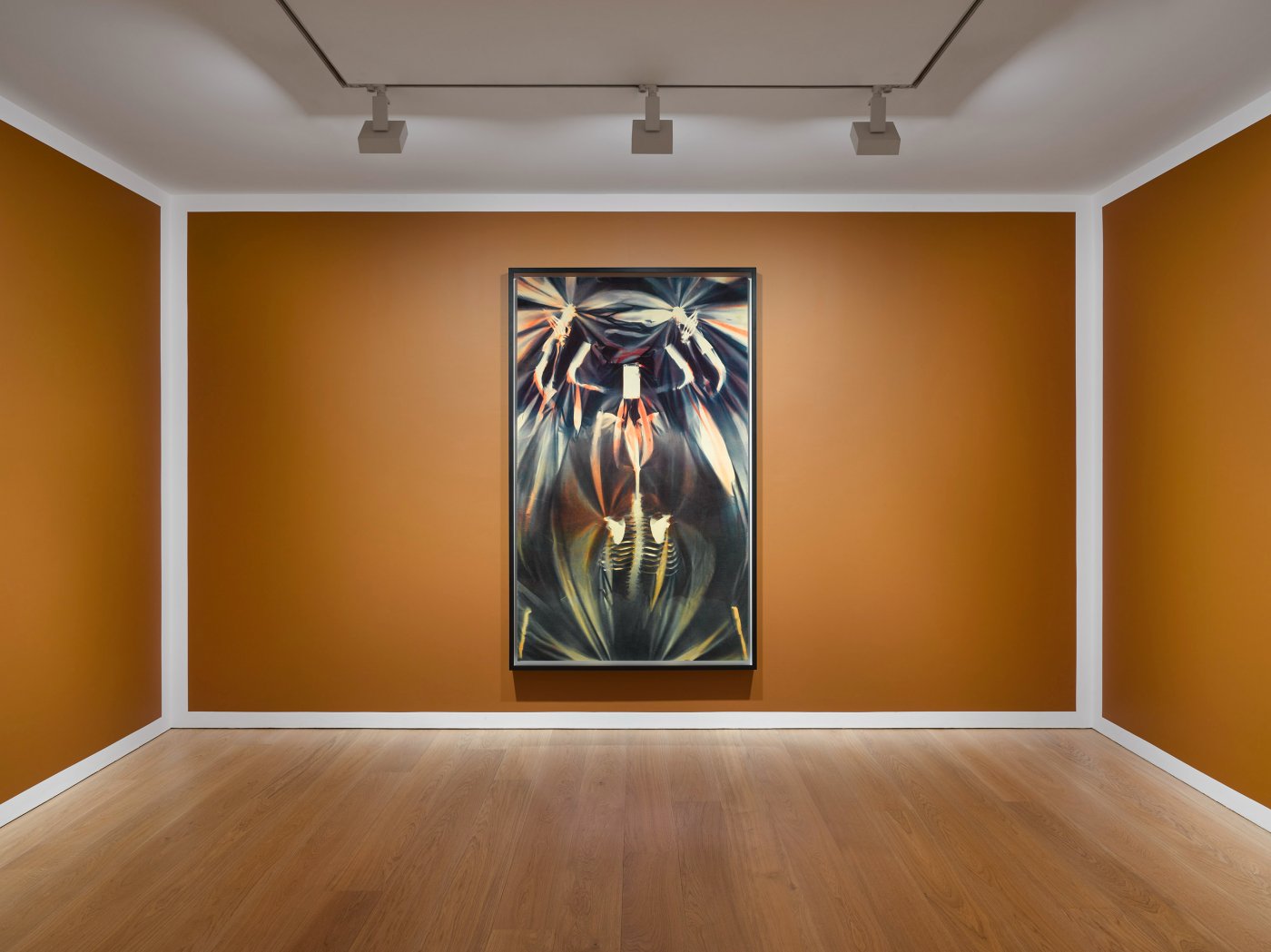 Joy Revision follows Ursuţa’s current presentation in the 59th Venice Biennale and her inaugural solo show at David Zwirner Paris in 2021. In her London exhibition, the artist connects the urgency of existential questions probed by art with an art-historical investigation of image-making. By acknowledging the past life of the Mayfair townhouse in which the gallery is located, Ursuţa references (Blinky) Palermo’s wall paintings of the late 1960s, which – alongside the work of his contemporaries such as Daniel Buren, Donald Judd, and Sol LeWitt – introduced alternative methods of determining form into the artistic process. Palermo’s spontaneous paintings of arbitrary forms, generated by the lines or omissions of the built environment, questioned the precedence of foreground versus background, merging reality and fiction. Similarly, in Joy Revision, the townhouse’s architecture becomes a non-neutral framework that is at once a functional environment and a schematic depiction of it: a projective space onto which apparition-like images are placed.

Ursuţa’s photograms, a recurring aspect of her practice, engage with the history and technology of photography since the medium’s inception in the 1820s. As early as the 1850s, ‘ghost photography’ rendered pictures that purported to capture the unseen and conjure uncanny presences, suggesting that the living could commune with the deceased. The new photograms and sculptures in the exhibition also reference long-standing art-historical traditions more broadly, ranging from ancient death masks and funerary monuments to acheiropoieta (‘icons made without hands’) and domestic genre paintings.

As in much of her practice, Ursuţa’s photograms combine various techniques with an element of chance, resulting in compositions that seem to be occupied by mysterious presences and auras. Like Man Ray’s ‘rayographs’, Ursuţa’s works are made without a camera or lens, and she joins methods culled from early photographic practices with those from printmaking. In an analogue process, she creates multiple impressions of composite sculptures she has made from items in her studio, revealing these three-dimensional objects and their negative impressions on velvet treated with photoreactive dye. Their surfaces feature richly coloured rays that burst forth in palettes of scarlet, umber, blue, and violet, capturing a dynamic interplay of light and shadow among motifs that link the domestic, corporeal, and medical – including designer chairs, skeletons, gurneys, and equipment seen in hospitals. These spectral impressions also recall the Shroud of Turin and other religious relics in which a negative image suggests a bodily presence.

Ursuţa’s four lead-crystal sculptures are the result of production processes that incorporate traditional and contemporary technologies such as lost-wax casting and digital modelling. Skeletal frameworks seem to emerge from draped figures, simultaneously phantasmal and corporeal. Redolent of ghosts, her veiled configurations point to a past tradition of attempting material transformations in the service of reviving the dead and suggest the cyclical nature of mortality. Together with the photograms, Ursuţa’s sculptures remark on visual art’s ability to give form to distress, frailty, and weakness, framing humankind’s inability to grapple with the awareness of our mortality and speculating on ‘the idea that the unspeakable can still be shown.’ (1)

Andra Ursuţa was born in 1979 in Salonta, Romania, a town on the Romanian-Hungarian border, and left for the United States in 1997. She moved to New York in 1999, and received a BA in art history and visual arts from Columbia University in 2002.

From 2018 to 2019, a solo exhibition of the artist’s work, Andra Ursuţa: Vanilla Isis, was presented at the Fondazione Sandretto Re Rebaudengo, Turin, Italy. Andra Ursuţa: Alps, which was on view in 2016 at the New Museum, New York, marked the artist’s first museum show in New York. Ursuţa’s work has been the subject of numerous solo exhibitions at prominent venues internationally, including Kunsthalle Basel (2015); Institute of Contemporary Art, Miami (2014–2015); Hammer Museum, University of California, Los Angeles (2014); Kölnischer Kunstverein, Cologne, Germany (2014); and Peep-Hole Art Center, Milan (2014). Ramiken Crucible presented the artist’s first solo exhibition, Andra Ursuţa: The Management of Barbarism, in New York in 2010.

(1) Andra Ursuţa, in conversation with the gallery, September 2022.