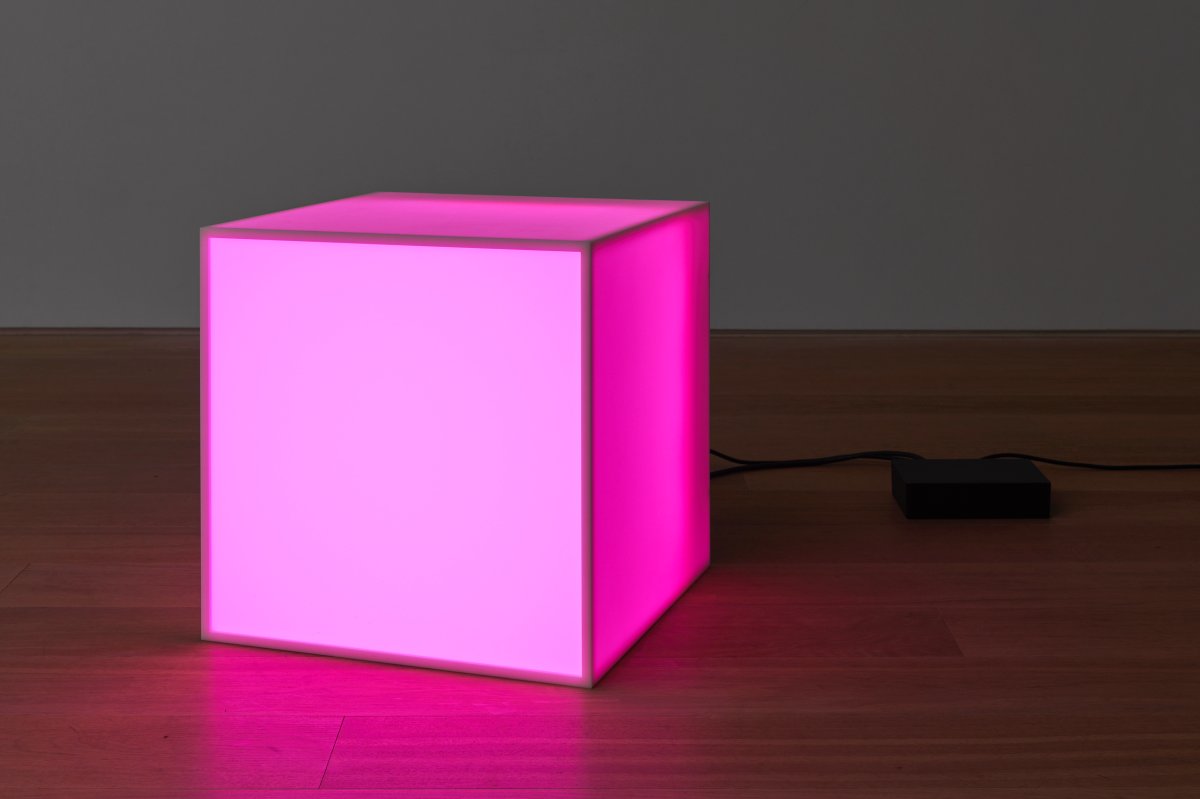 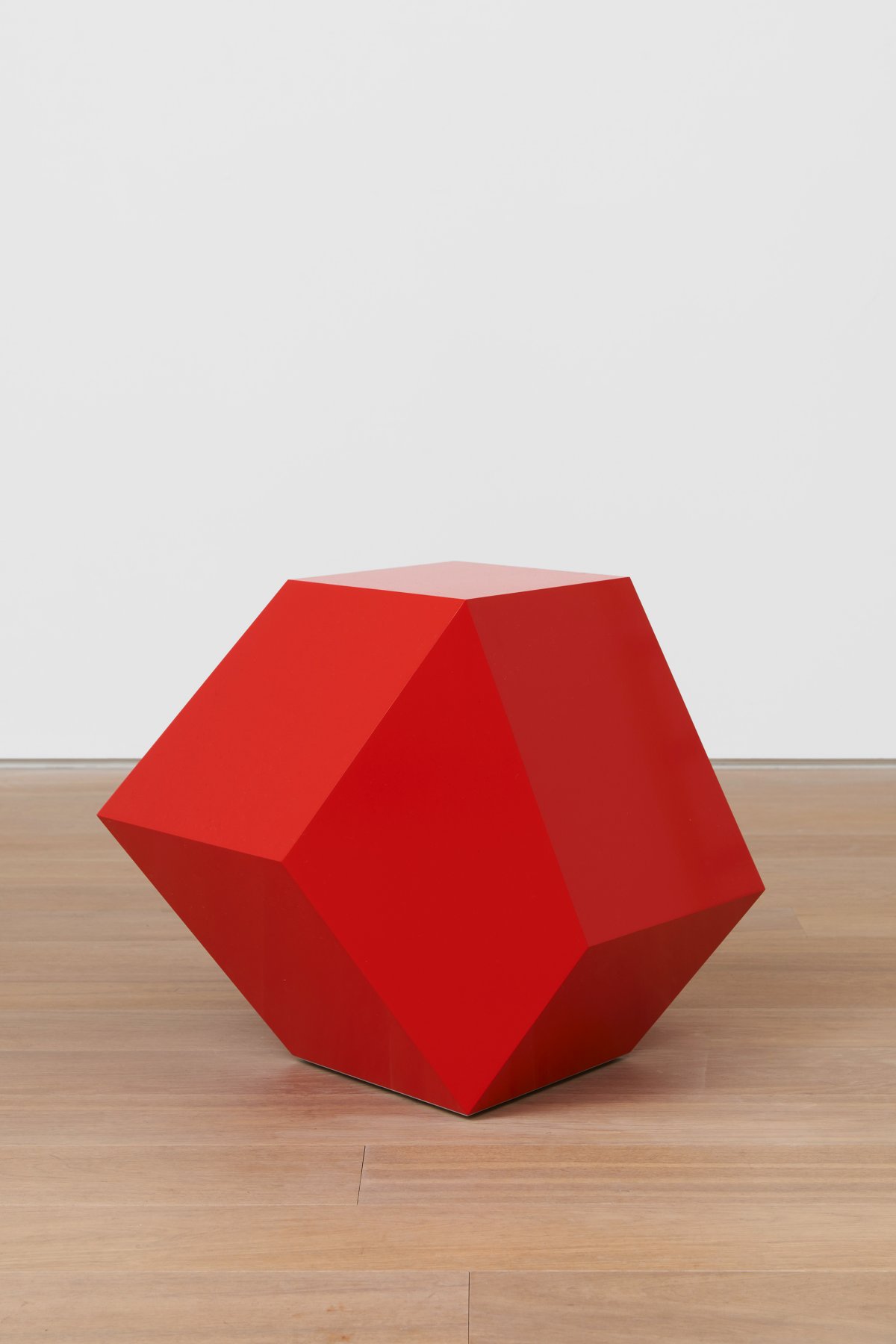 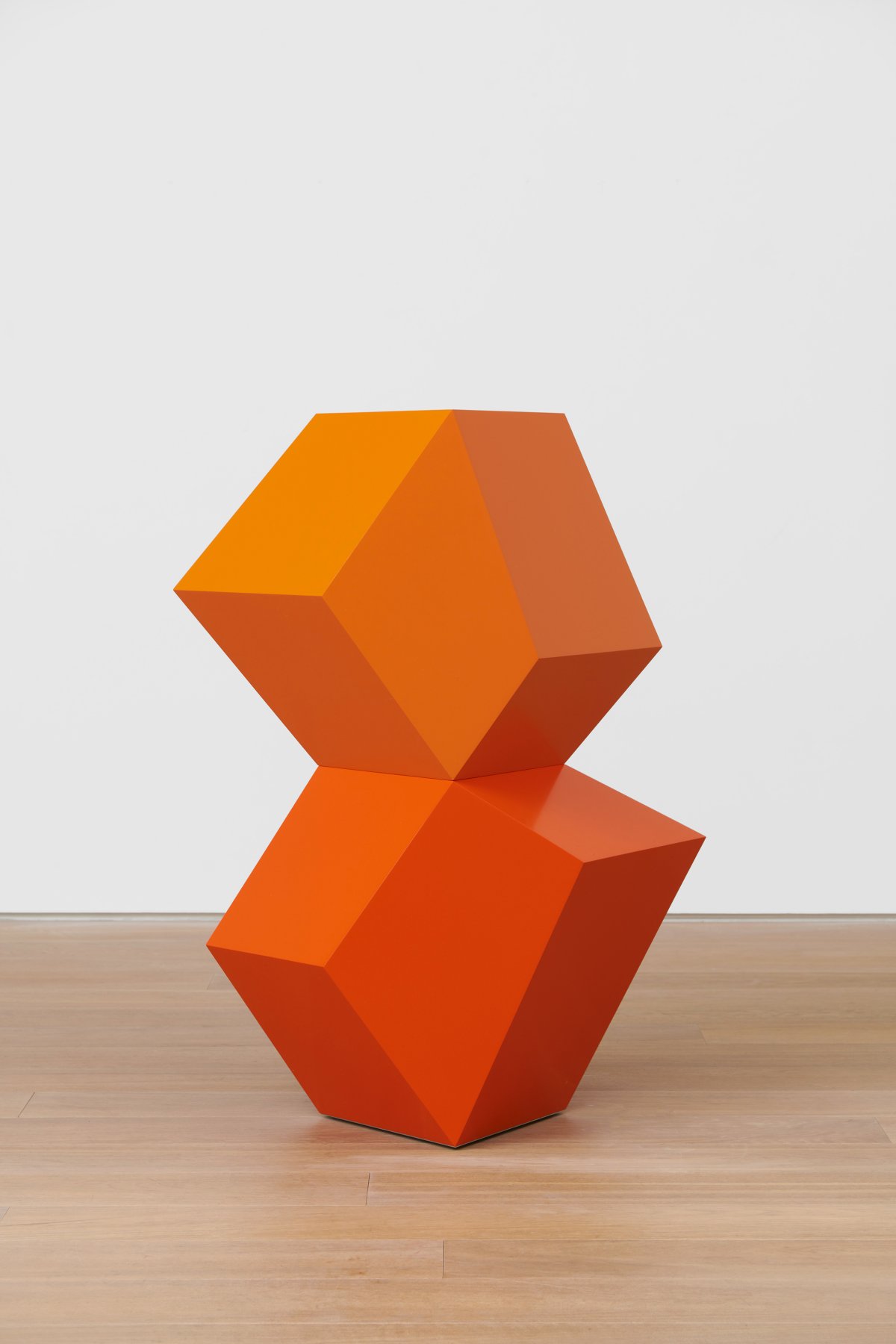 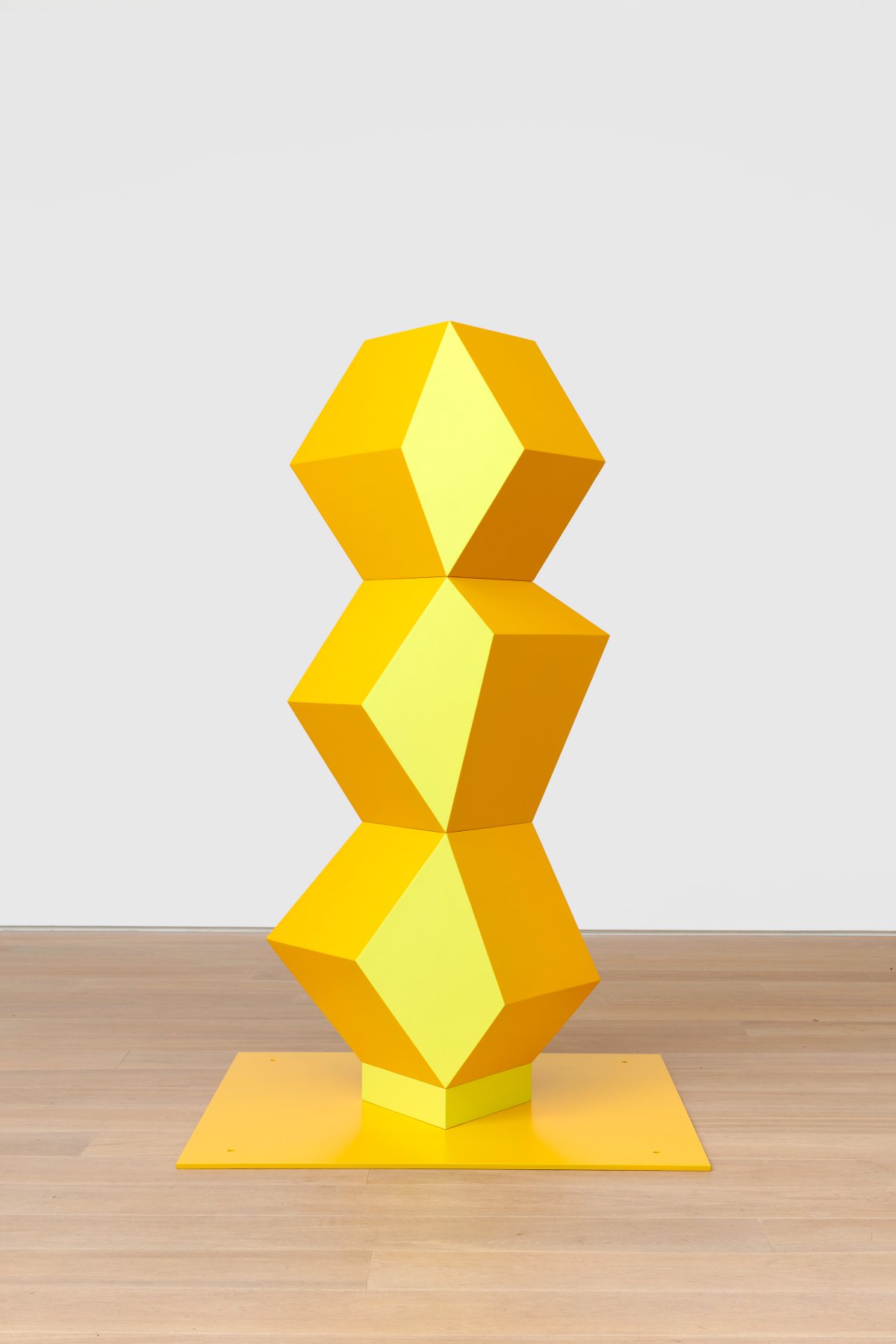 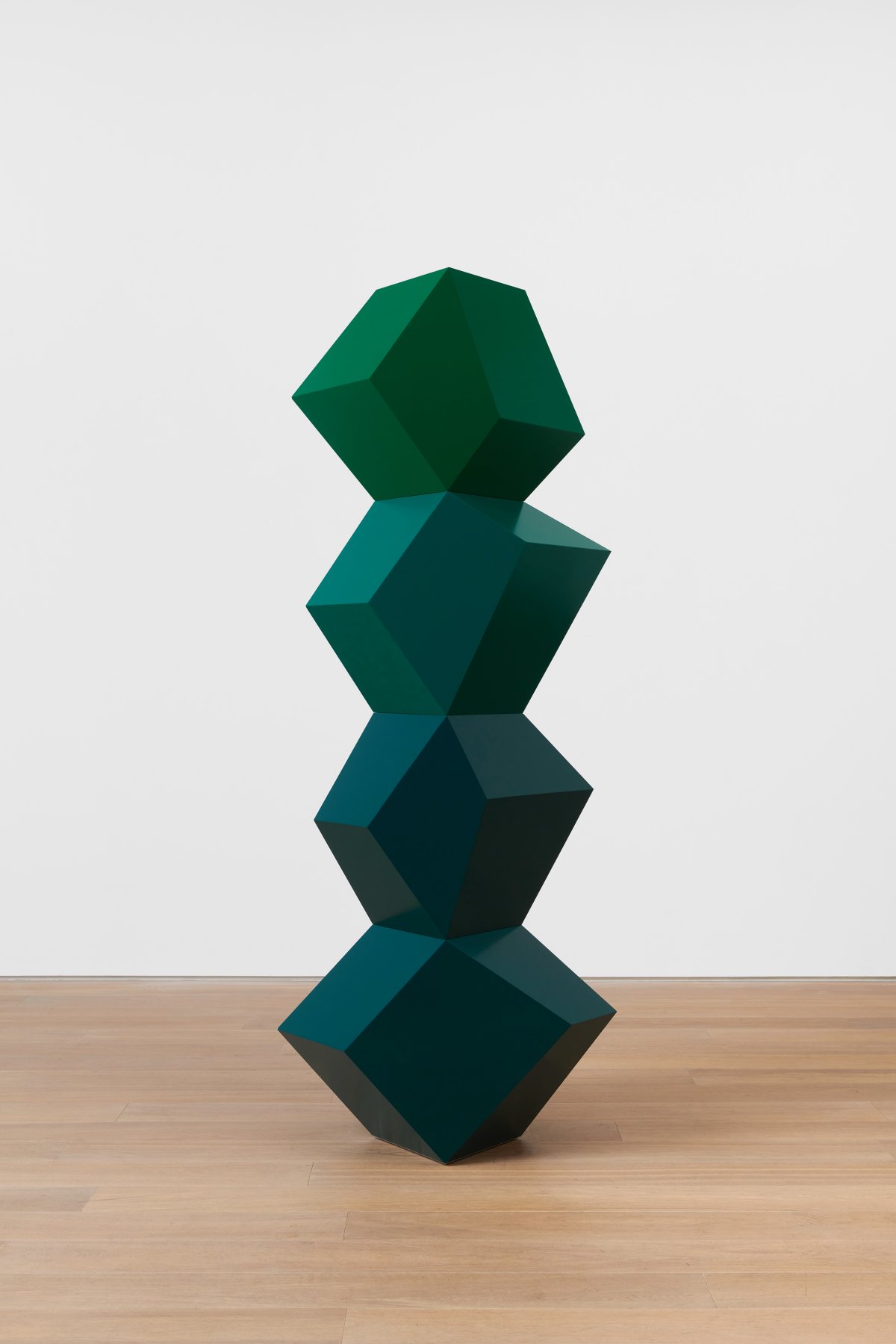 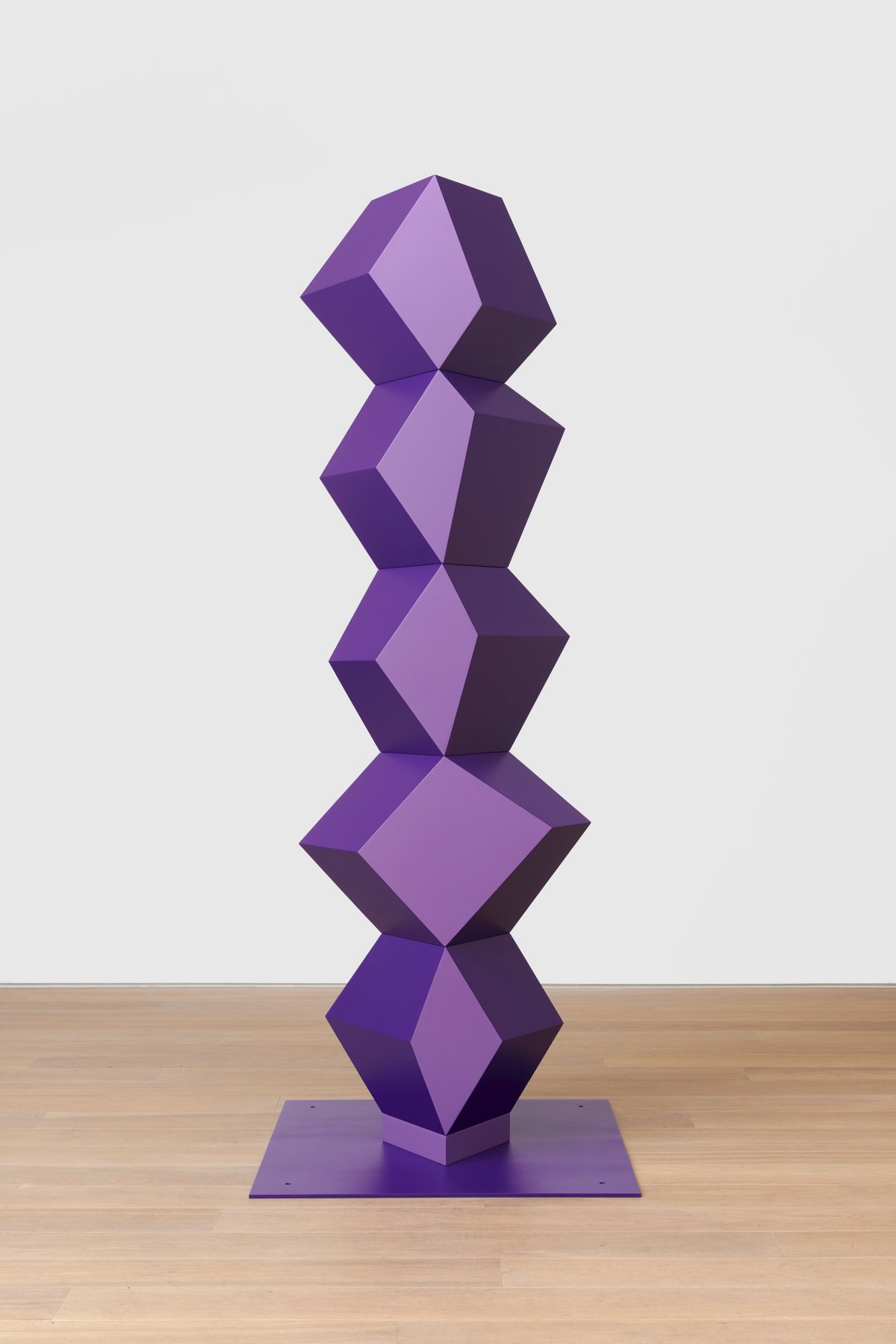 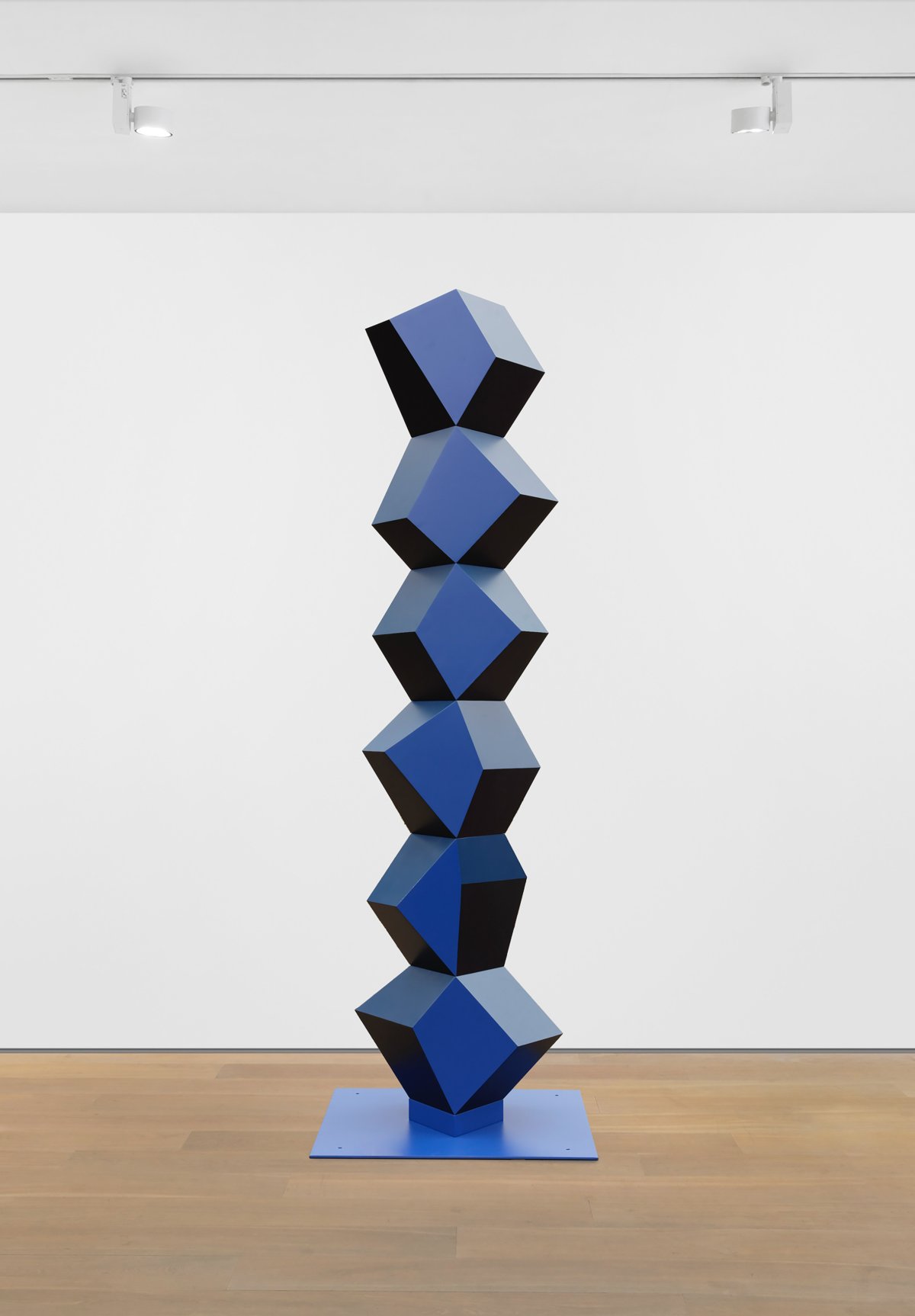 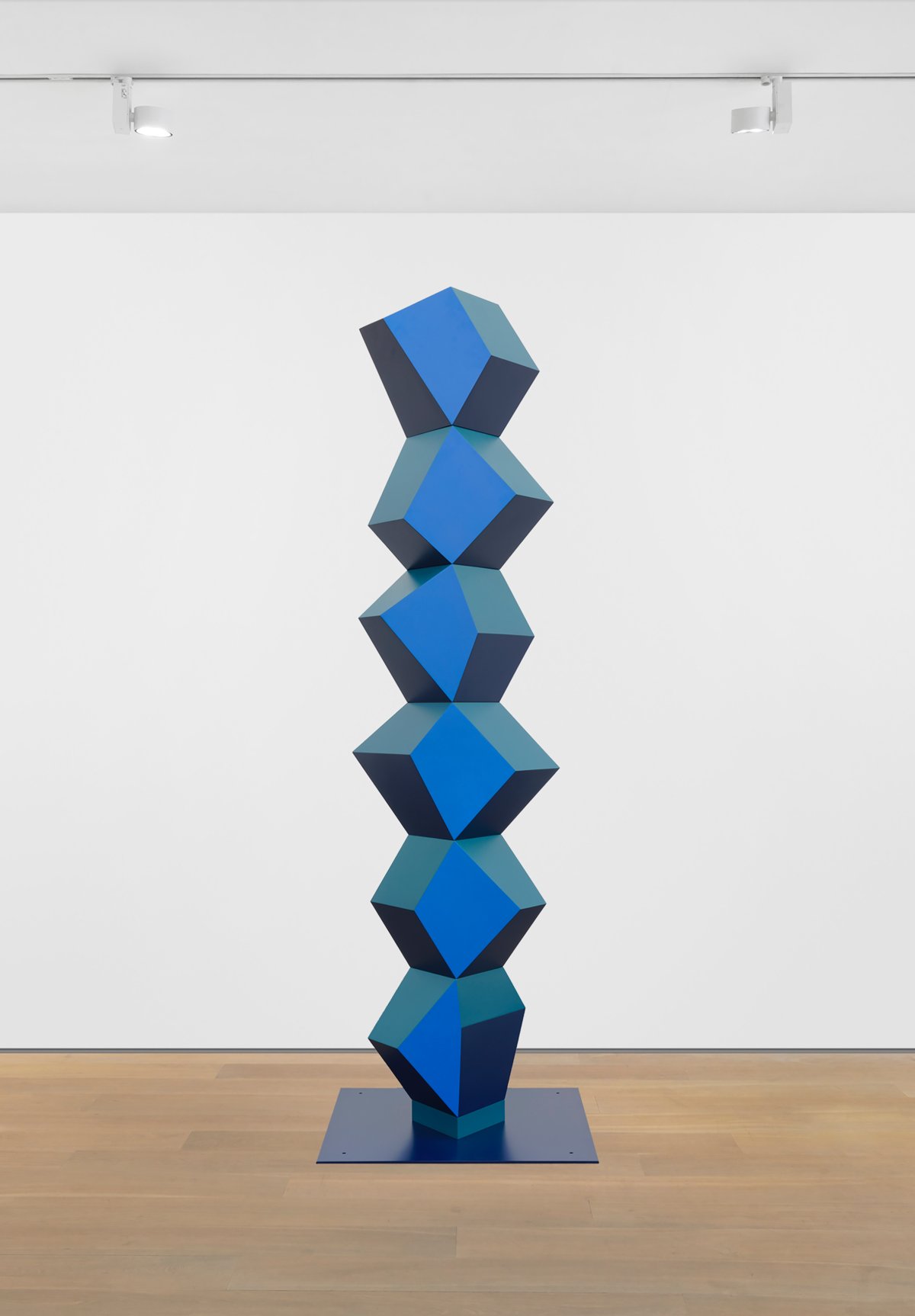 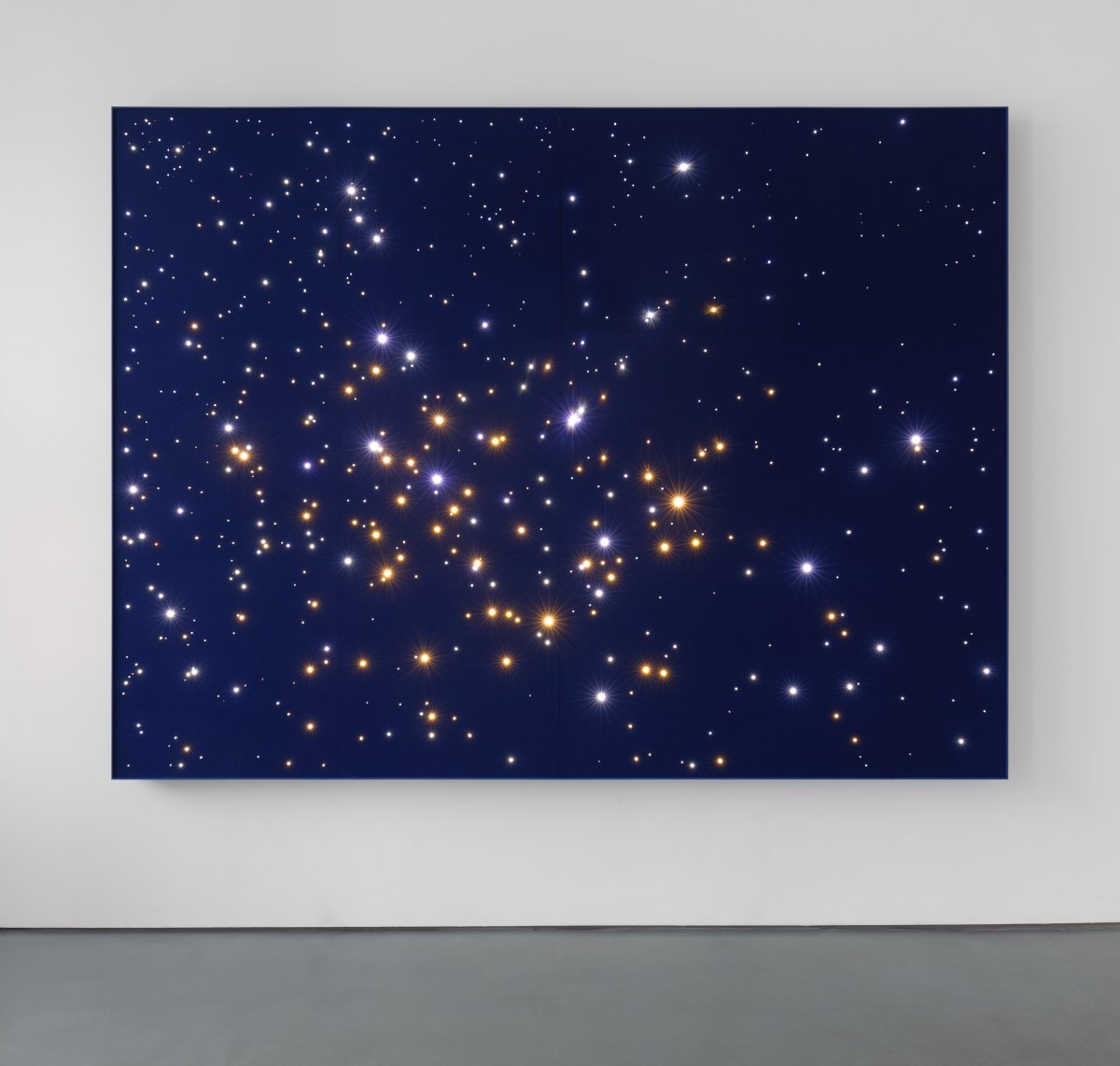 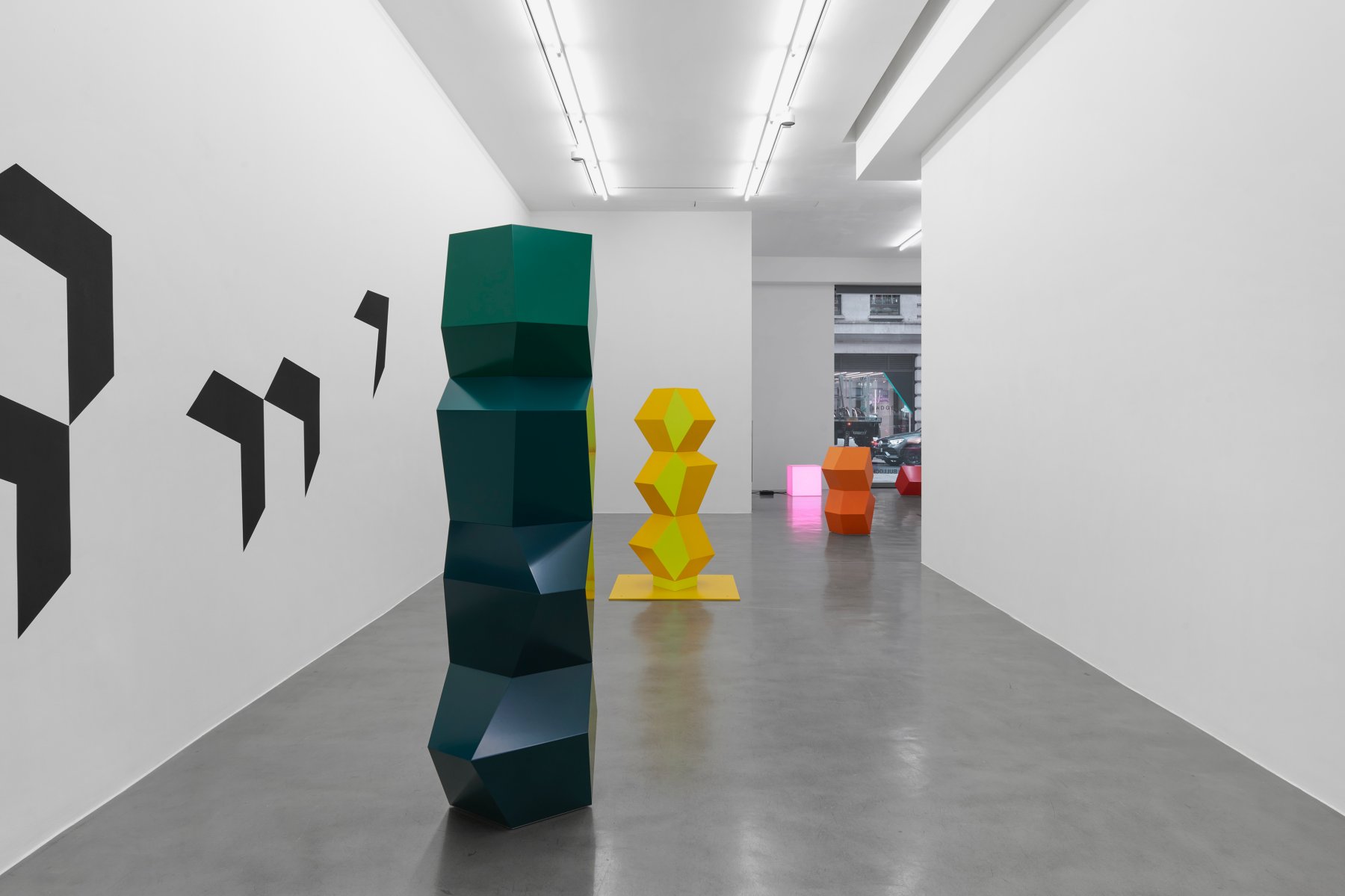 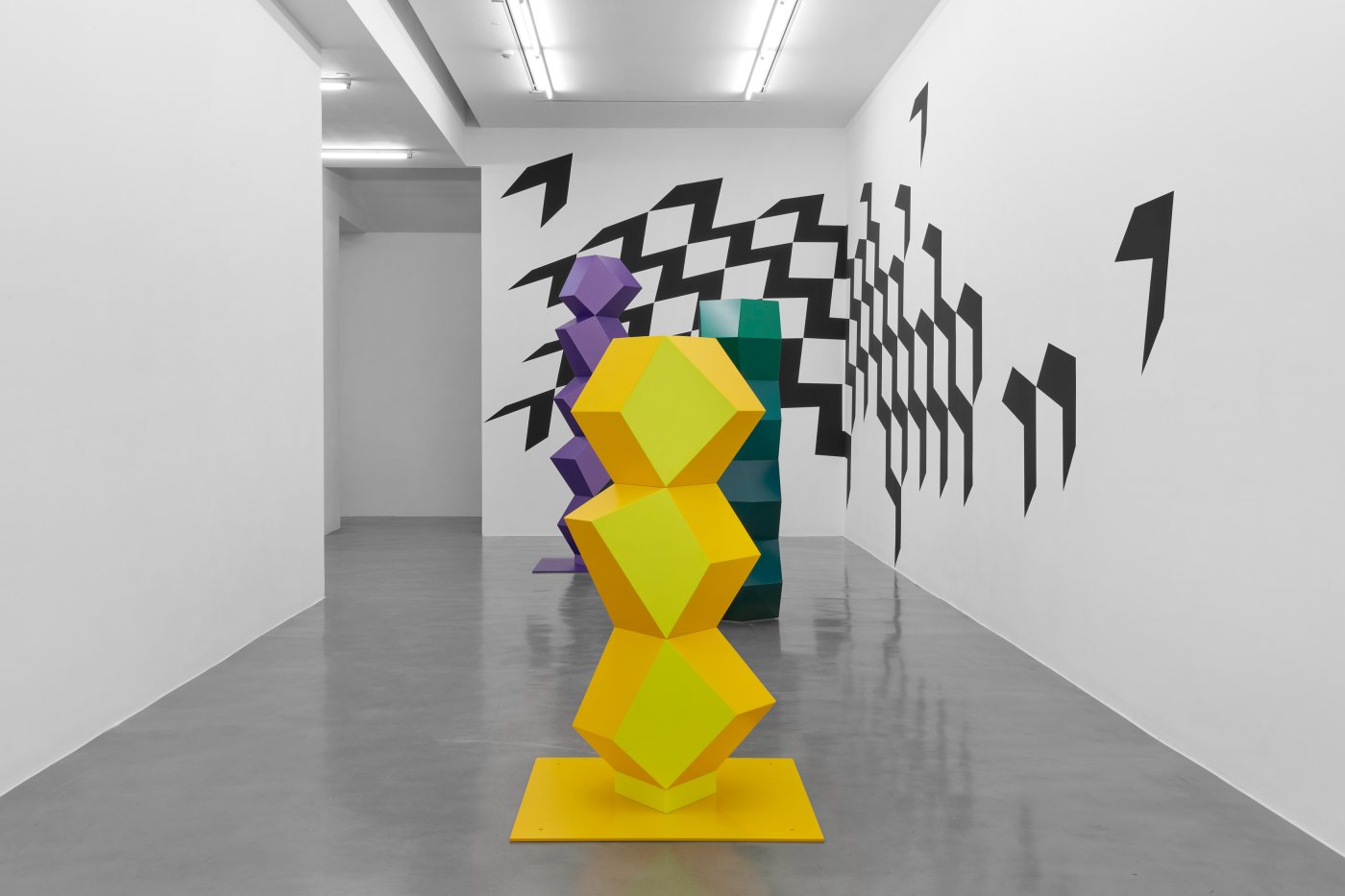 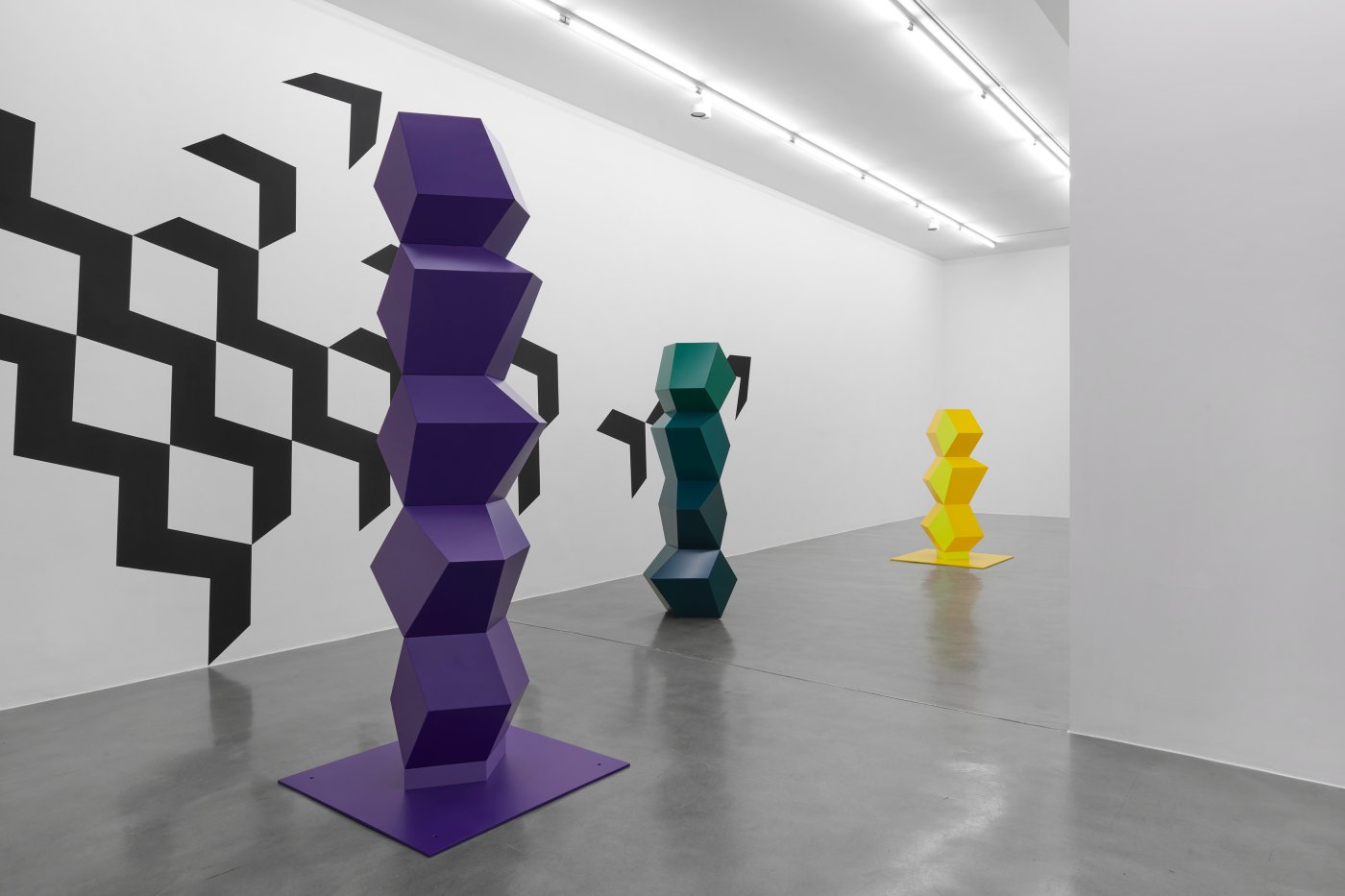 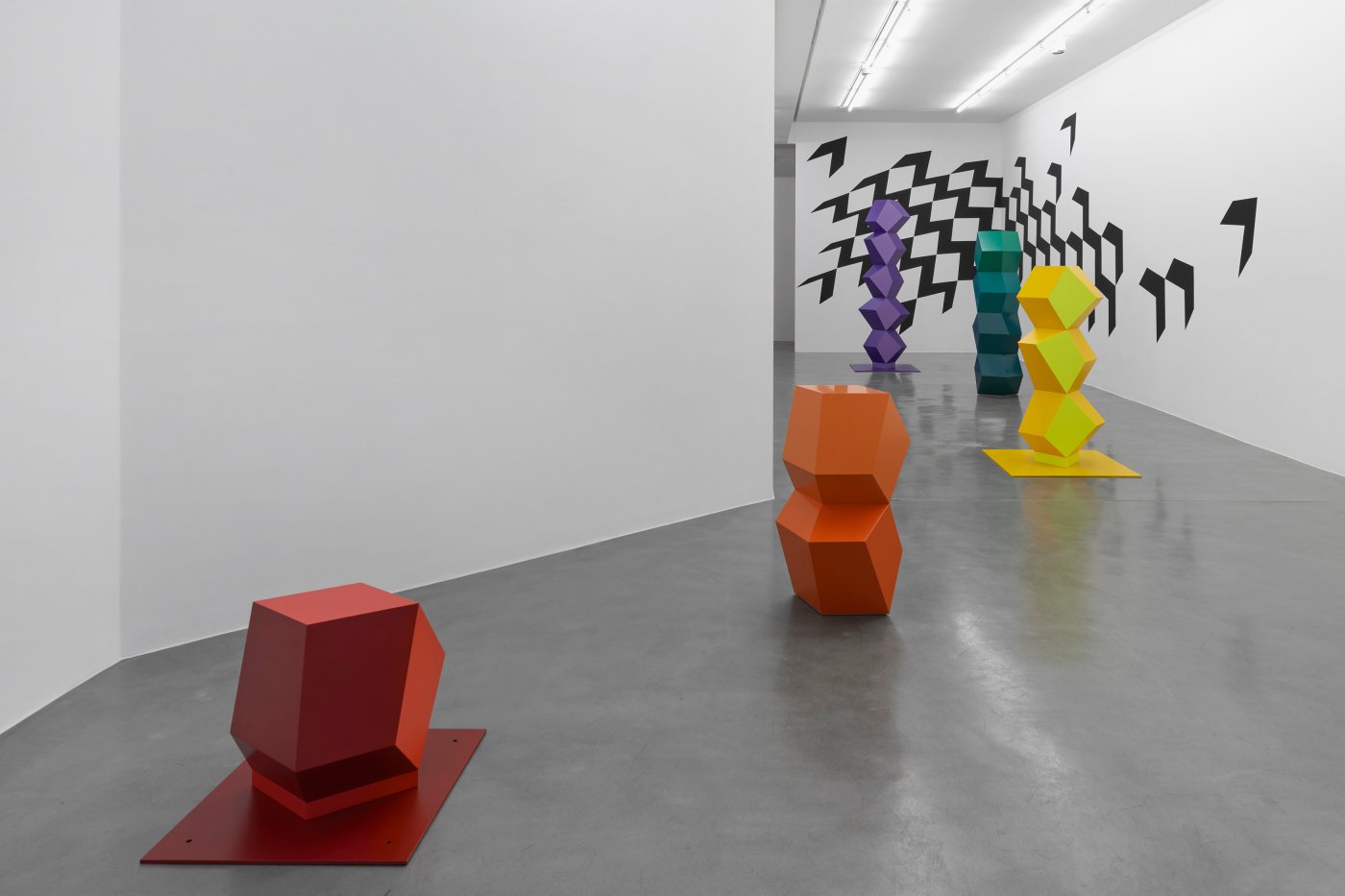 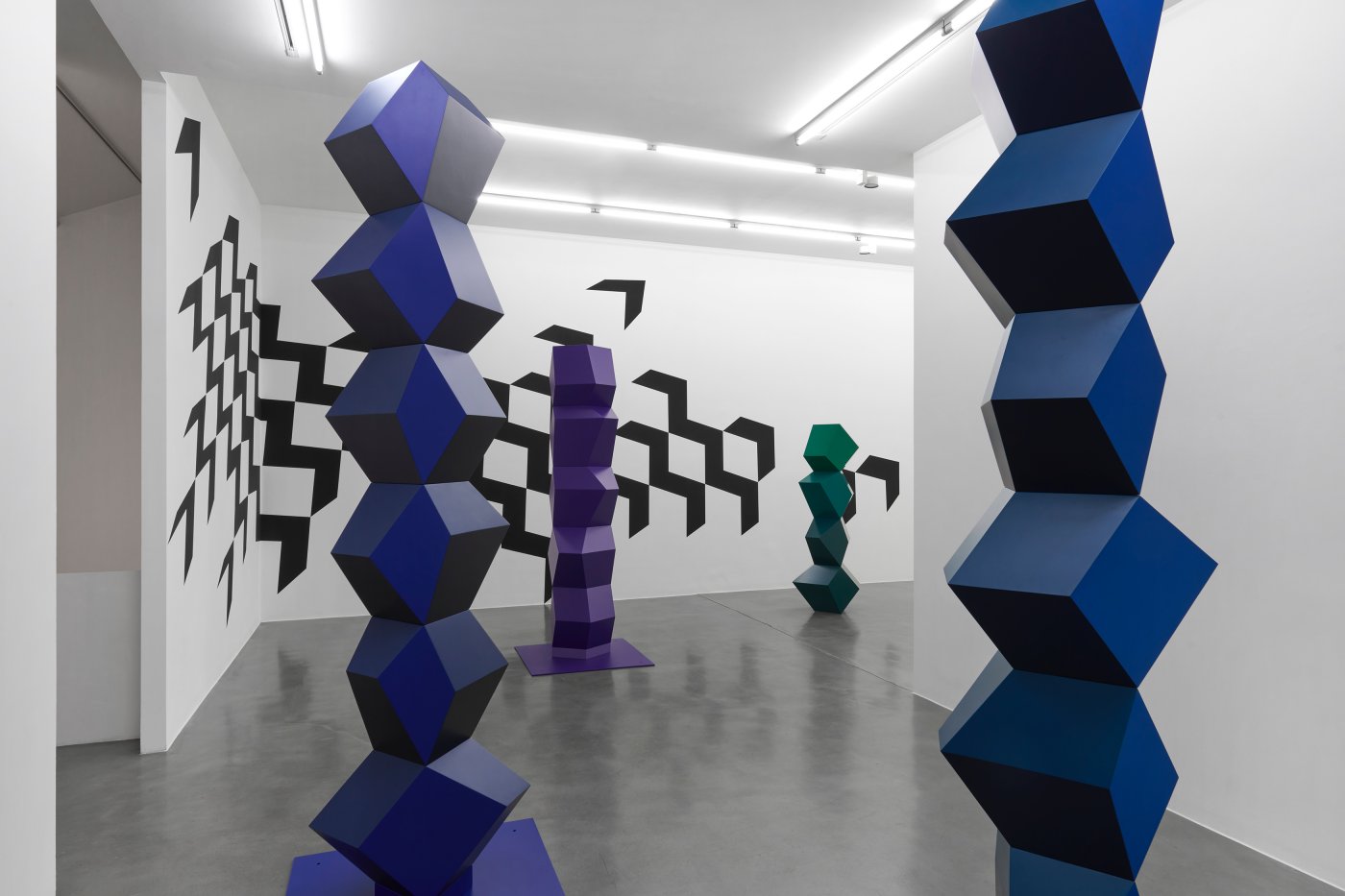 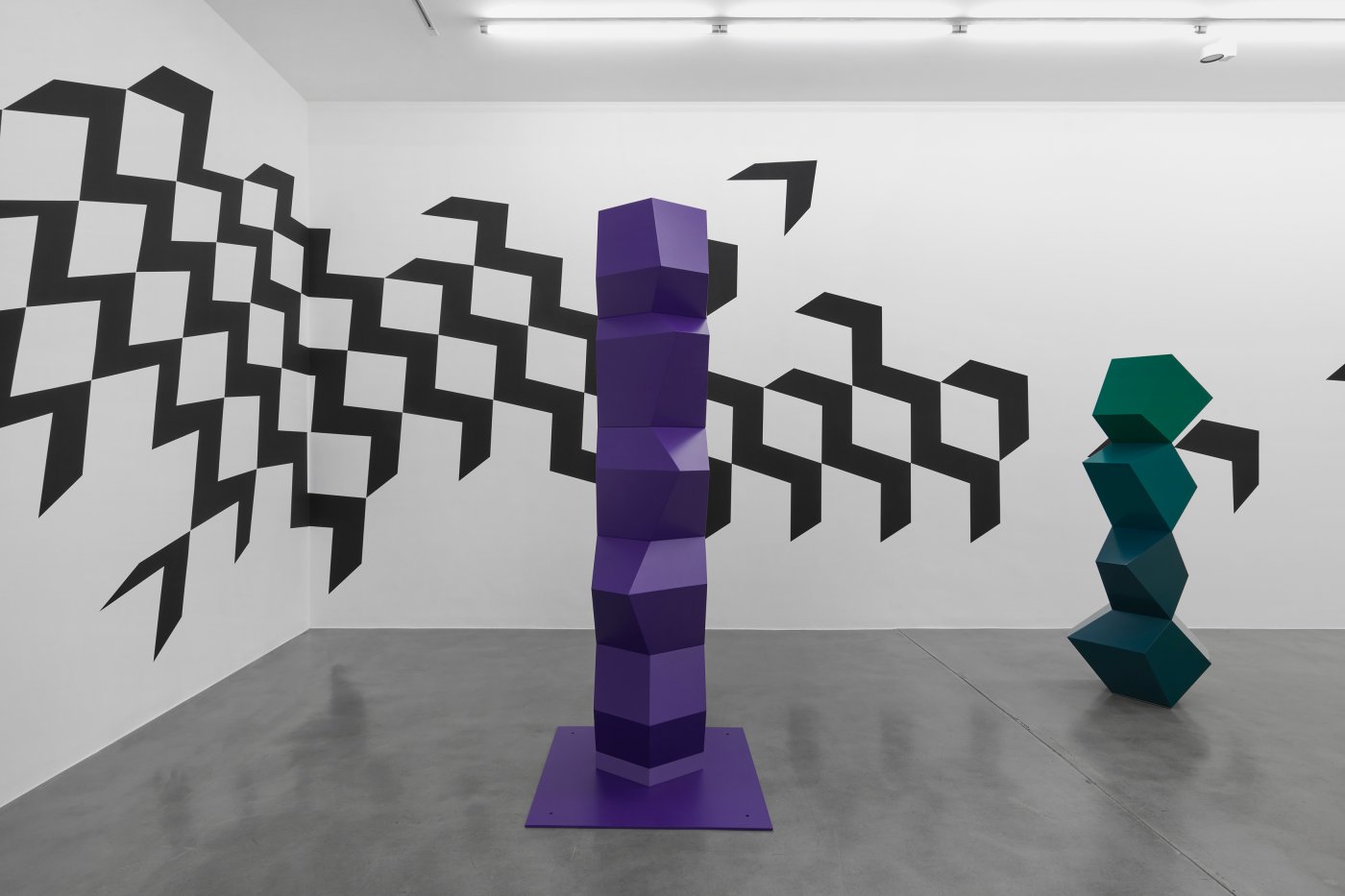 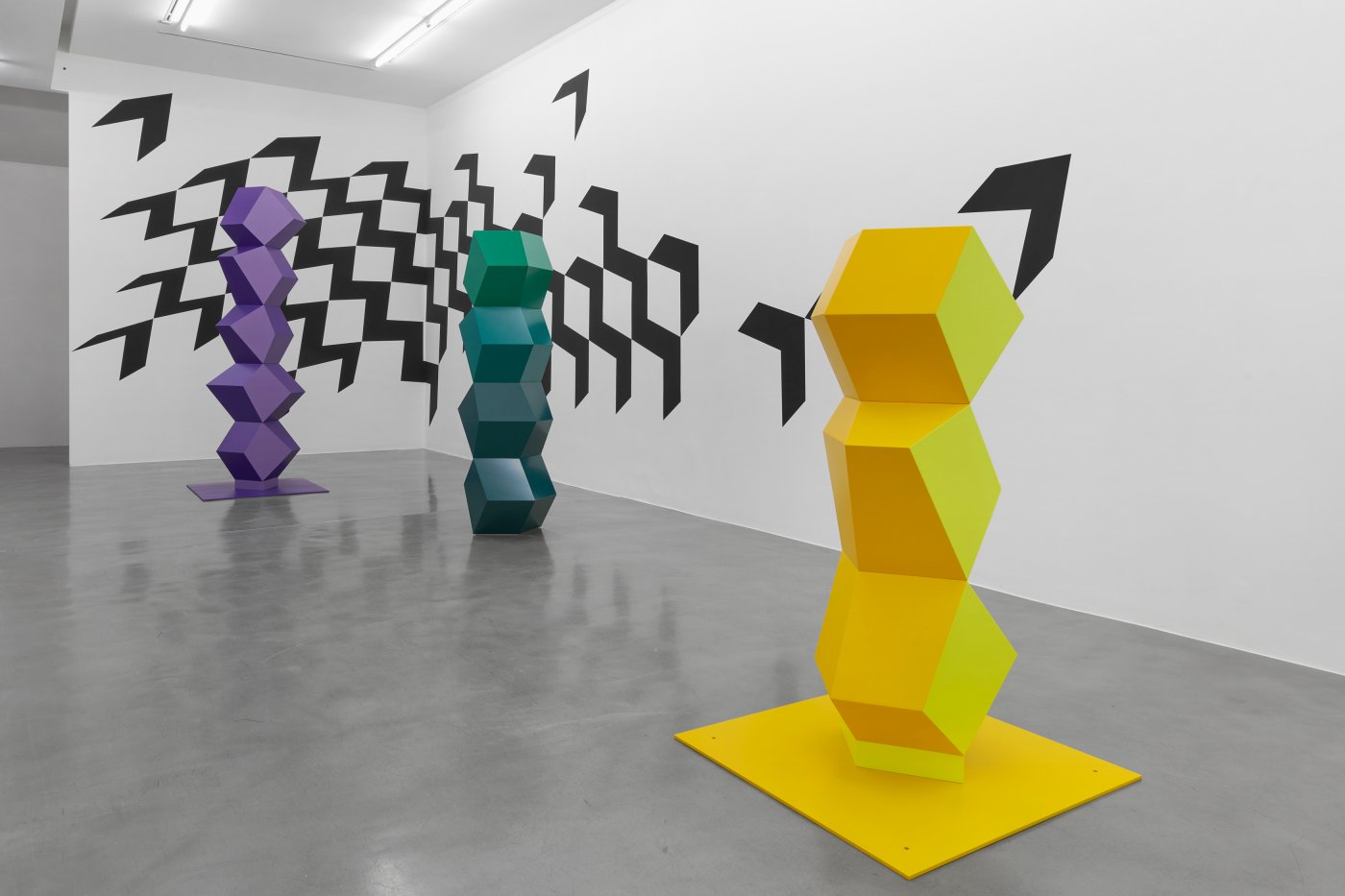 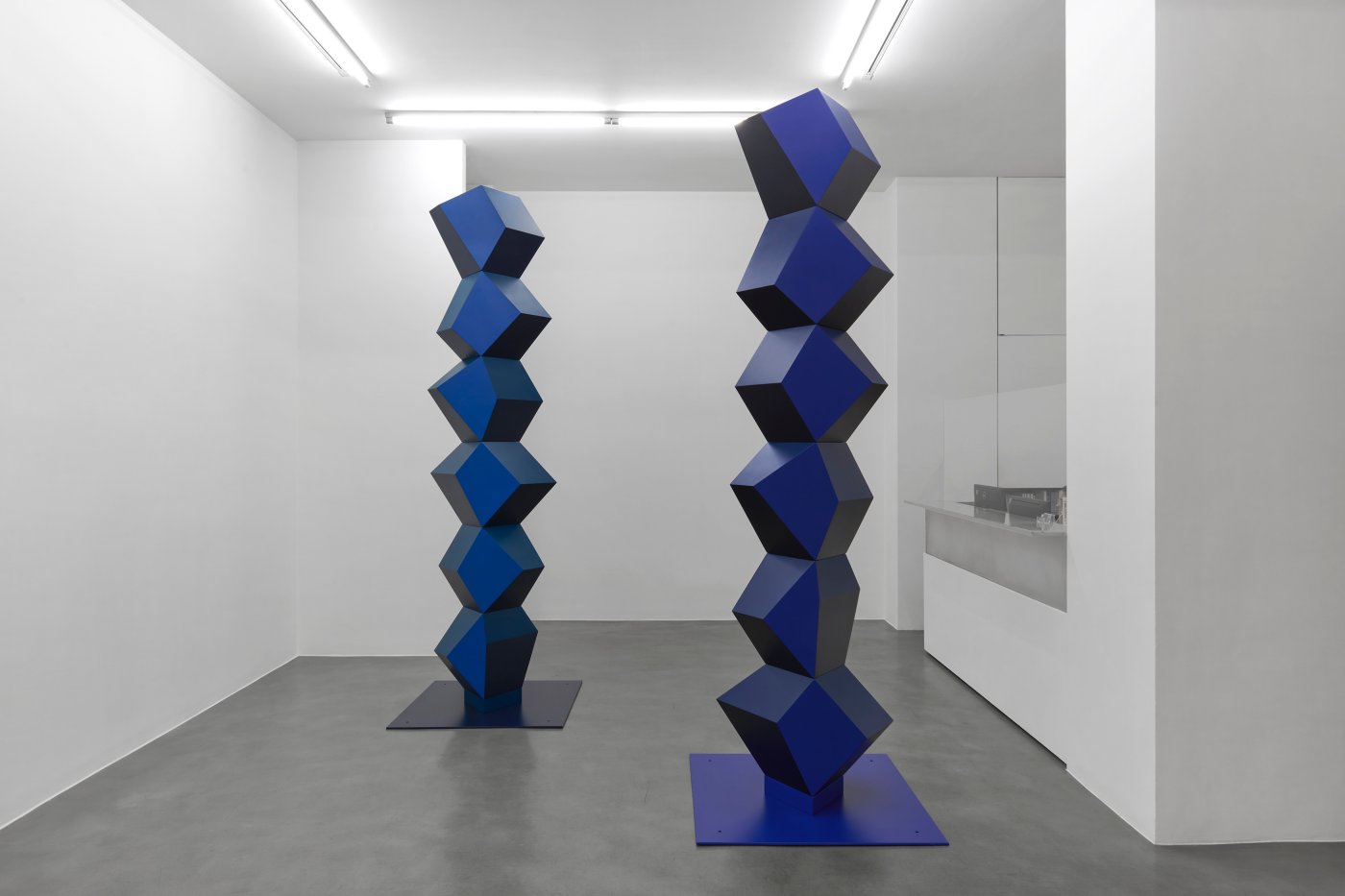 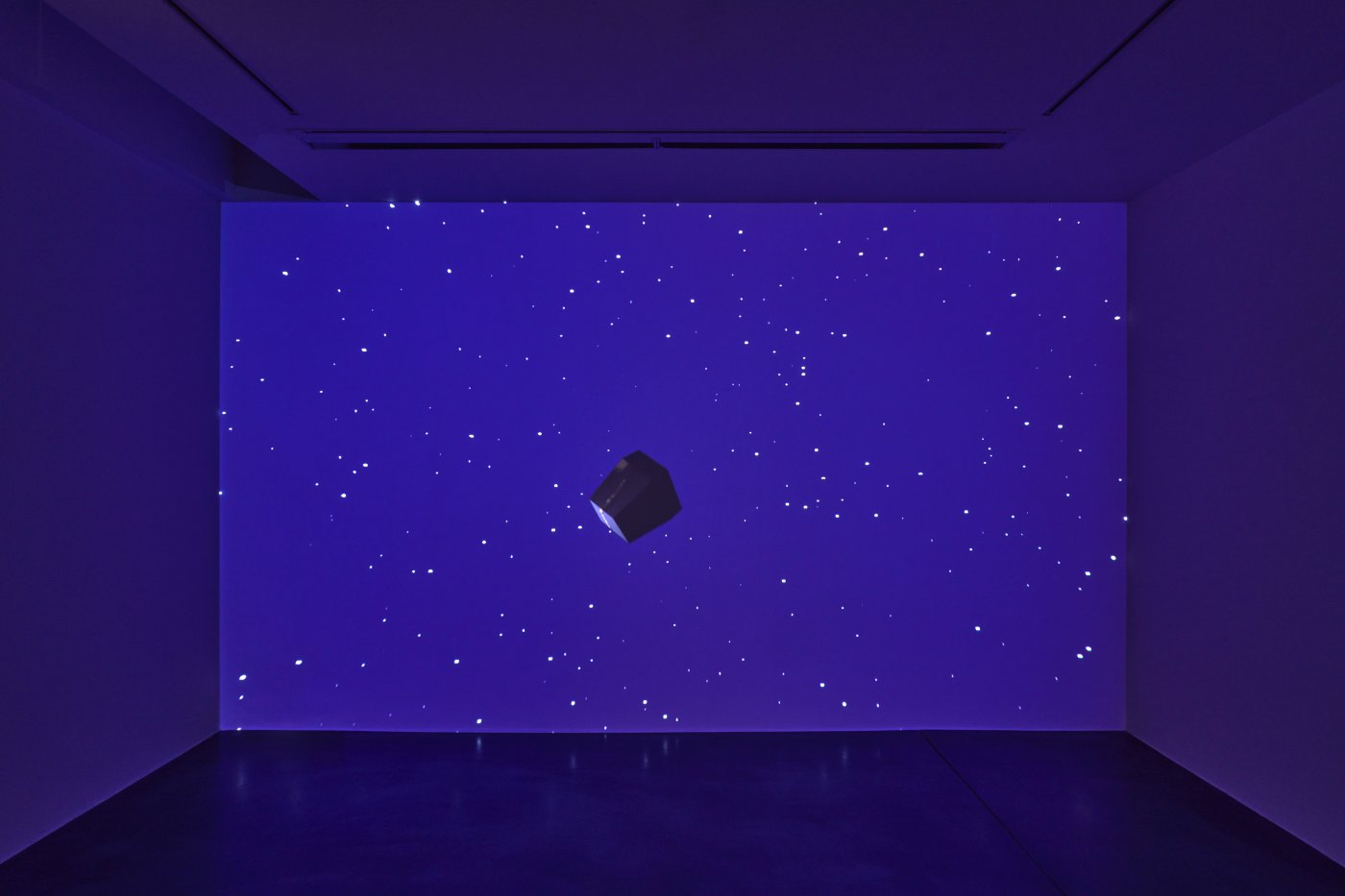 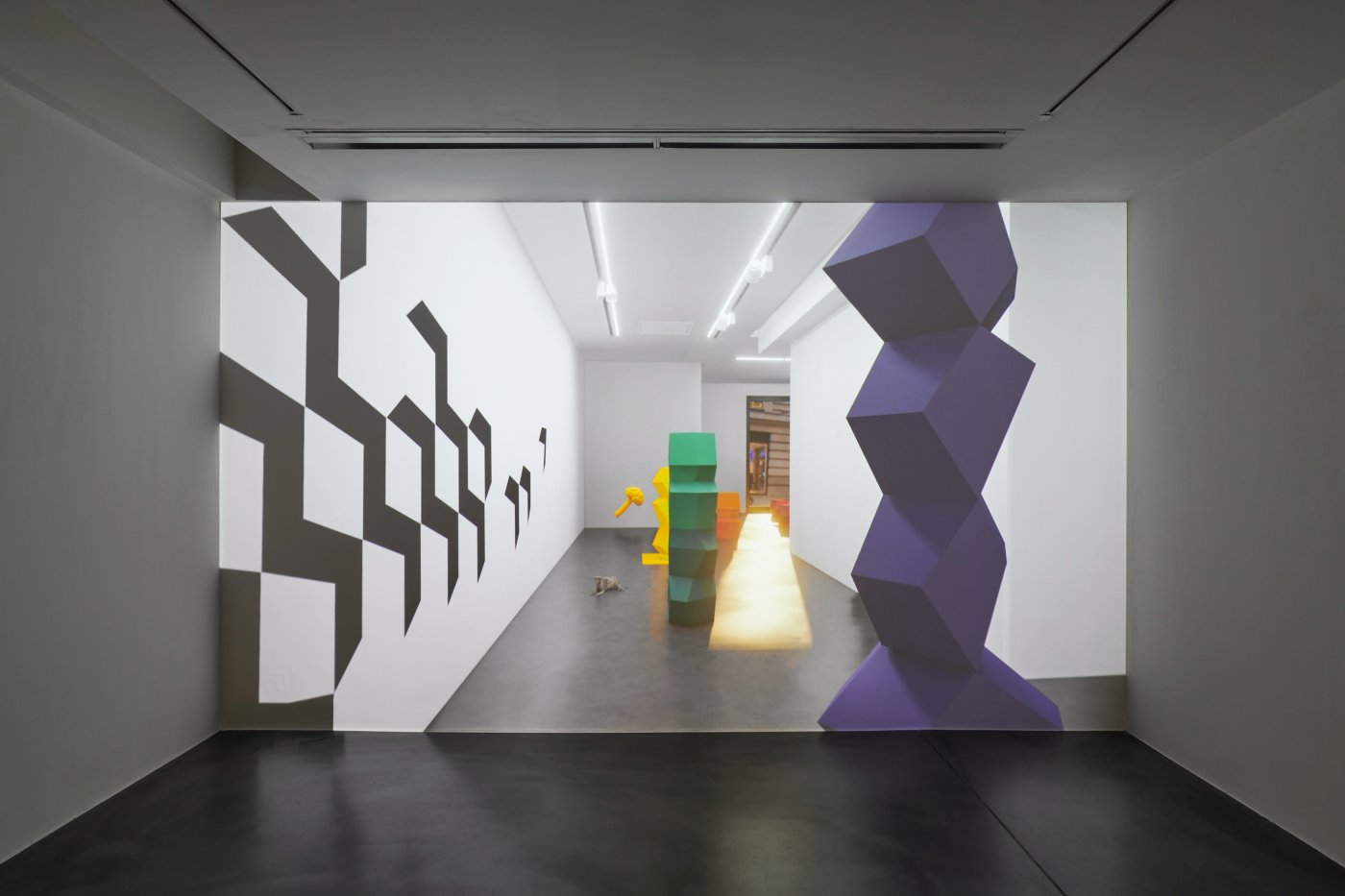 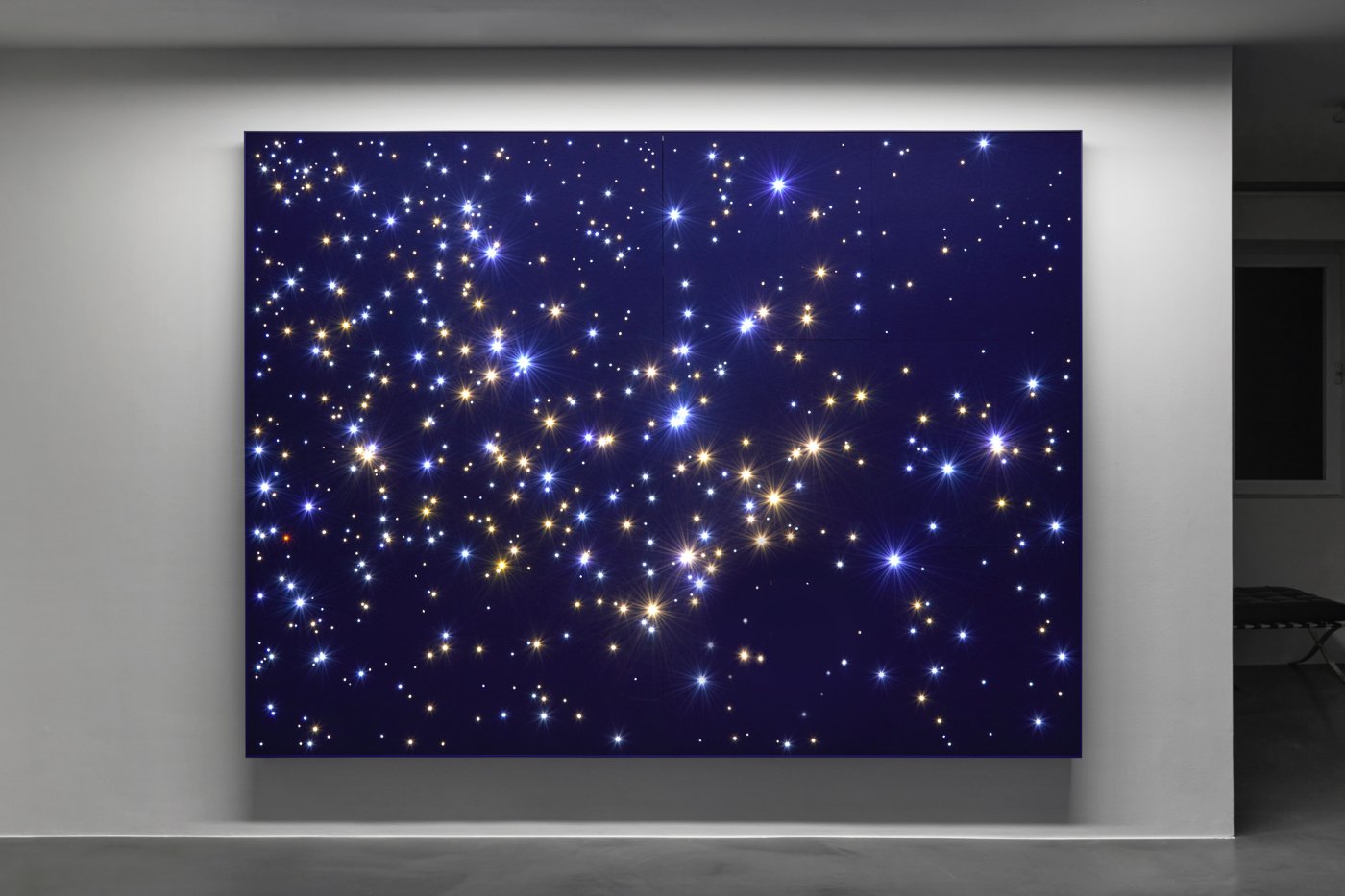 Bulloch’s multidisciplinary practice finds associations between the visual language of 20th century modernist art movements and the digital realm, encompassing a range of technologies from computer games to science-fiction narratives. Exploring the relationship between real and virtual space, the artist’s fascination with dimensionality is reflected in a new series of stack sculptures made from corian and stainless steel, a wall painting and a digital video that mirrors the exhibition, transporting the visitor out of the physical gallery space and into its virtual counterpart.

Reflecting Bulloch’s continued preoccupation with system and pattern, the title of the exhibition introduces the three categories of ‘rainbow’, ‘unicorn’ and ‘rhombus’ as organising principles for processing our experience of the world around us. Signifiers of classifying concepts, ‘rainbow’ for example – the refraction of white light into component coloured parts that form the meteorological phenomenon – acts as a stand in for physics, while ‘unicorn’ represents the mythological or imaginary realm and ‘rhombus’: geometric division or an accounting of space.

Rainbow Unicorn Pixel – a single corian Pixel Box placed at the entrance of the space, hosts a programme of prismatic light. Across the ground floor gallery space a sequence of totems increase in scale from one to six modular elements based on rhombus shapes and in many colours of the rainbow. With their respective titles, Rhombus Totem: Neon Demon, Heavy Metal Stack of Three: Krypton Griffin and Rhombus Totem: Argon Dragon unite the names of noble gases and mythological creatures, creating a link between the three categories of the exhibition’s title. Likewise, Heavy Metal Stack of Five: People Eater refers to the song Purple People Eater by Sheb Wooley, which tells the story of a mystical one-eyed, one-horned creature from outer space who descends to Earth with ambitions of joining a rock ‘n’ roll band. A wall painting wraps around the installation, with rhombus shapes mirroring the shifting planes of Bulloch’s modular sculptures, eschewing their three-dimensionality for a deliberate, monochromatic flatness that plays with the viewer’s perception of space and scale.

On the lower ground floor of the gallery Bulloch presents the digital video Rainbow Unicorn Rhombus, based on a three-dimensional model of the exhibition upstairs. Unburdened by the laws of physics that govern real space, small sculptures Melancholyflower and Peanut Glass Stone float around the virtual gallery and navigate through the installation. An animated cat briefly and unexpectedly appears, so too fragments of a flattened-out texture map of a young woman called Klara. Nearby the video, a monumental Night Sky suspends the viewer’s sense of gravity to create a feeling of weightlessness in the physical space that mirrors the camera’s path on screen. Bulloch invites discourse on the anachronistic relationship between advances in technology and its consequences for the corporeal, human body. The fleeting apparition of a cat captures the experience of the fragmentation of self in the simultaneous occupation of real and digital worlds, reflecting the ways in which today’s society shifts constantly and frictionlessly between the two. Drawing attention to the coexistence of competing realities, Bulloch explores the rapidly disintegrating distinctions between the fictitious and real, and our increasing faith in virtual worlds.