“…clay creates a piece of history; ceramics live on after us.”

JGM Gallery presents the first solo exhibition by Danish-born, London-based artist Anne Athena, who is known for the “fine beauty” of her work at the intersection of ceramics and painting. 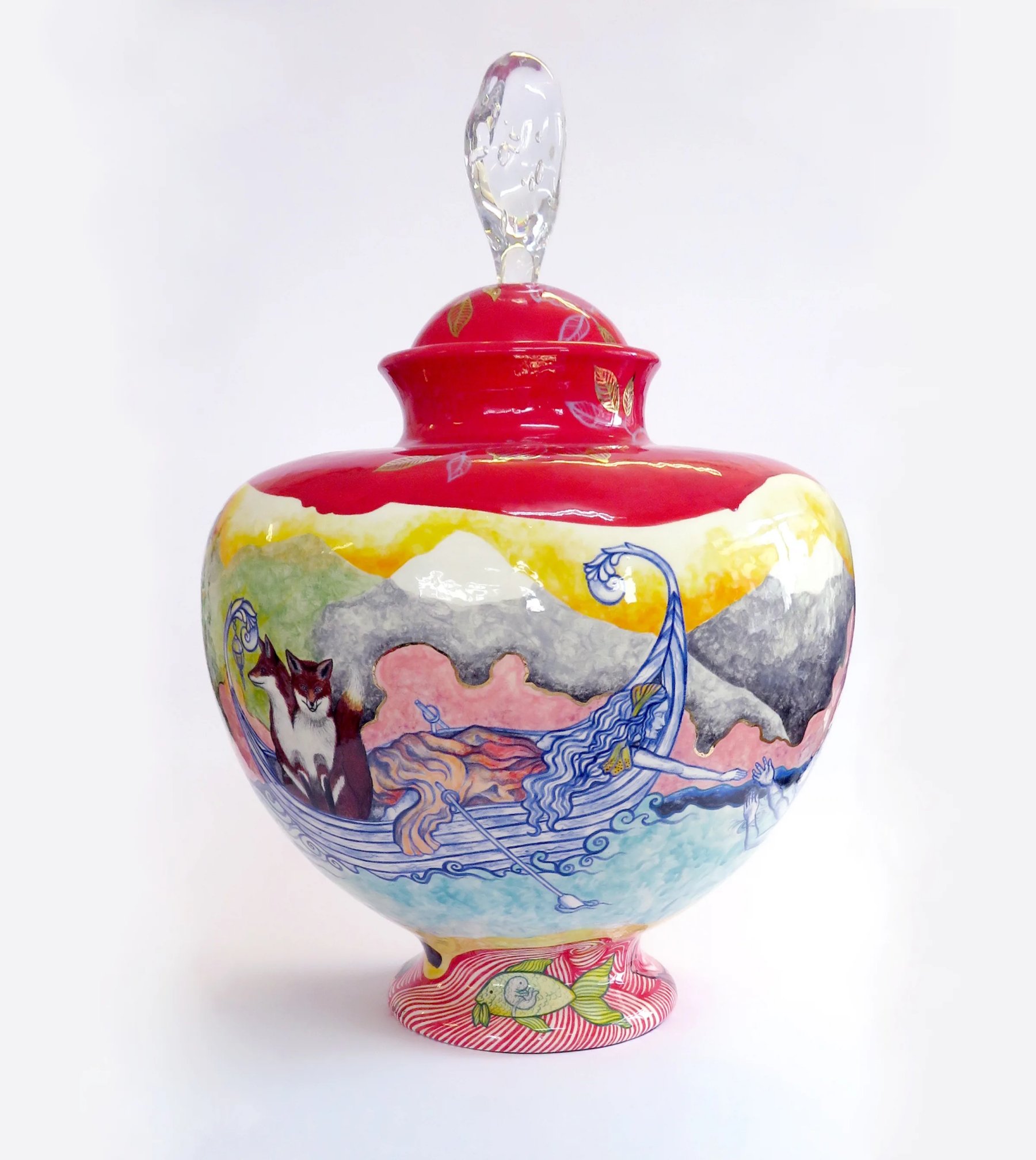 ‘Materialising the Unseen’ is a series of 13 new pieces, ranging from a sphinx-like sculpture to ceramic vessels and a pair of wall-mounted reliefs called ‘Magic Hands’, all made over the last year.

Anne Athena uses ceramics – one of the world’s oldest art forms – as a three-dimensional canvas for the often mystical and ethereal “reflections and ponderings” that arise from her subconscious, hence the title of the exhibition.

Her multi-layered work also reflects what Carl Jung, the Swiss psychoanalyst, a huge influence on Anne Athena, called the ‘collective subconscious’ – a subconscious inspired by mythology and folklore across ages in time and geographies.

“We all swim in the same ocean,” says Anne Athena. With this phrase, she is in addition referring to a childhood spent along the coasts of Denmark, near the “powerful, cold and stormy” sea. Water also symbolises the subconscious mind, where humankind and nature are one.
In the space where language ends and imagery begins, Anne Athena has created a database of around 100 of her own hand-drawn symbols, in the same tradition that indigenous and ancient cultures around the world have done for tens of thousands of years – they, too, often also using the medium of ceramics.
The symbols of Anne Athena include, for example: a staircase to represent the path to an unknown realm; a rescue dog to symbolise comfort and trust; and Nike sneakers to portray vanity. One of her most recent editions are virtual reality glasses. “Symbols of our time,” explains Anne Athena.
The shapes of the vessels and sculptures themselves reflect those of the human body, and how the body has been perceived over the ages, says the artist, who likes to work in clays as “clay creates a piece of history; ceramics live on after us.”

Anne Athena adds: “Clay gives me this grounded feeling of peace and calm. Clay is alive: you need to allow the clay to be your master. You cannot master the clay – unless you learn the rules to follow.”

Jennifer Guerrini Maraldi, founder of JGM Gallery, first met Anne Athena in 2019, at her final-year exhibition at the Battersea campus of the Royal College of Art, across the road from JGM Gallery.
“I was immediately drawn by the fine beauty of Anne Athena’s work,” says Guerrini Maraldi. “As I first approached the pieces, I could feel their deep ethereal power. And, as I began to connect with the visual symbolism of her pieces, I knew that I had found something very special, very magical.”