Gallery rosenfeld presents Araminta Blue’s (b.1990, Cyprus) first solo exhibition ‘Silt’ in London. Over the last 12 months, the artist has been working on an entirely new body of paintings and a selection of works on paper that shall be unveiled across the both gallery floors. The exhibition also features a large-scale diptych of over 3m that testifies to her increasing ambition. 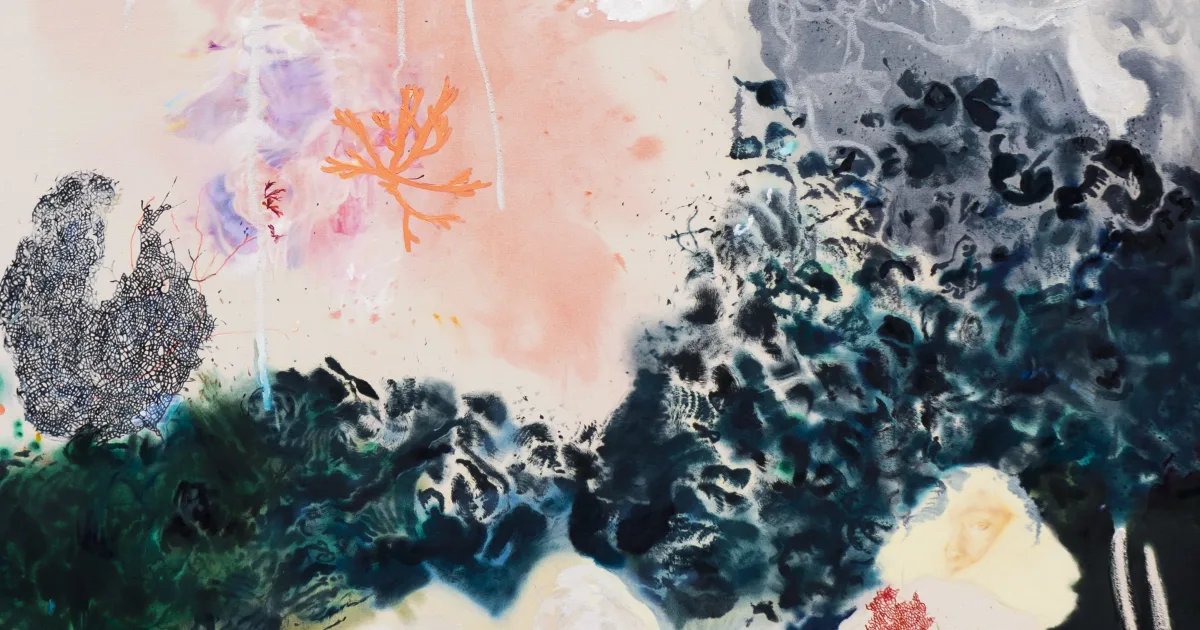 Blue’s paintings represent a significant and bold development in her work; no longer are the paintings so centred around the human figure although they are still very present. Abstraction plays a considerable role in furthering the works dealing with feeling and sensation, both of the mind and the body.

These artworks trace the artist’s innermost thoughts and feelings relating to her experience of pregnancy and subsequent birth, a state she has recently gone through. In every work there are recurring elements such as water, vegetation and the human figure often buried within the weeds, and other watery debris. The sensation of something slowly emerging, little by little into life, swimming in liquid and yet, often being immersed in weeds is impressive. This voyage has rarely been depicted in a more moving and never in a more original way. It is fascinating to compare the paintings prior to pregnancy and those produced after; suddenly, there is more light and the introduction of brilliant colour, where previously there had been a prevailing darkness and brooding of colours.

The title ‘Silt’ relates to the concept that her figures are being carried in an “animated suspension from one space to another…as if its moving from a source, to river mouth, to brackish estuary, to the bottom of the sea…”. Blue describes objects slowly flowing from one source to another space of a different nature. Her canvases invoke infinite fluidity where “all melt as a new substance, a thing that is not a thing, constantly in flux”. Blue sees that the act of painting achieves a similar experience through techniques of layering, covering and revealing. ‘The masses of moving subject matter are connected through line and colour, spatters of water like freckles, tributaries like veins, colours of bruising from my blood tests’
(Araminta Blue)

As seen in the works featured in the exhibition, Blue’s style is typified in the use of blank spaces in the canvas. She continues to play with empty spaces in her recent works, as she has done with much finesse in the past. Yet this time the difference is found in the figures. The pieces in this exhibition are less illustrative compared to her earlier works. Through abstraction, Blue embraces the intangible realm of the senses and the mind.

Araminta Blue was born 1990 in Cyprus to British parents. She graduated with a masters in painting from the Slade School of Art last year and remained working in London. She also holds a BA (Hons) from Ruskin School of Art, was the recipient of the Artists Collecting Society Studio Prize 2019 and shortlisted for the Chadwell Award, Derek Hill Scholarship and His Award in recent years.