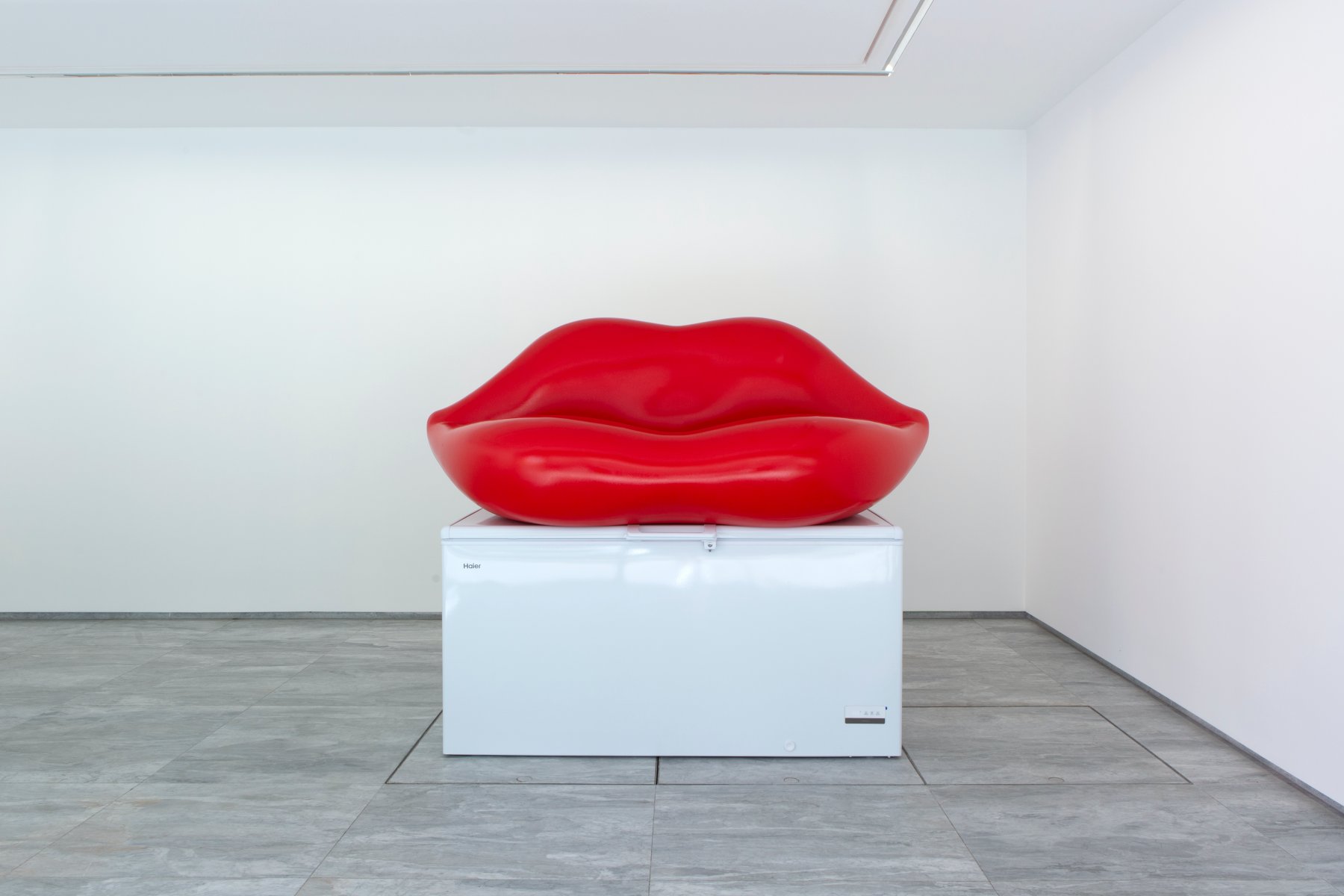 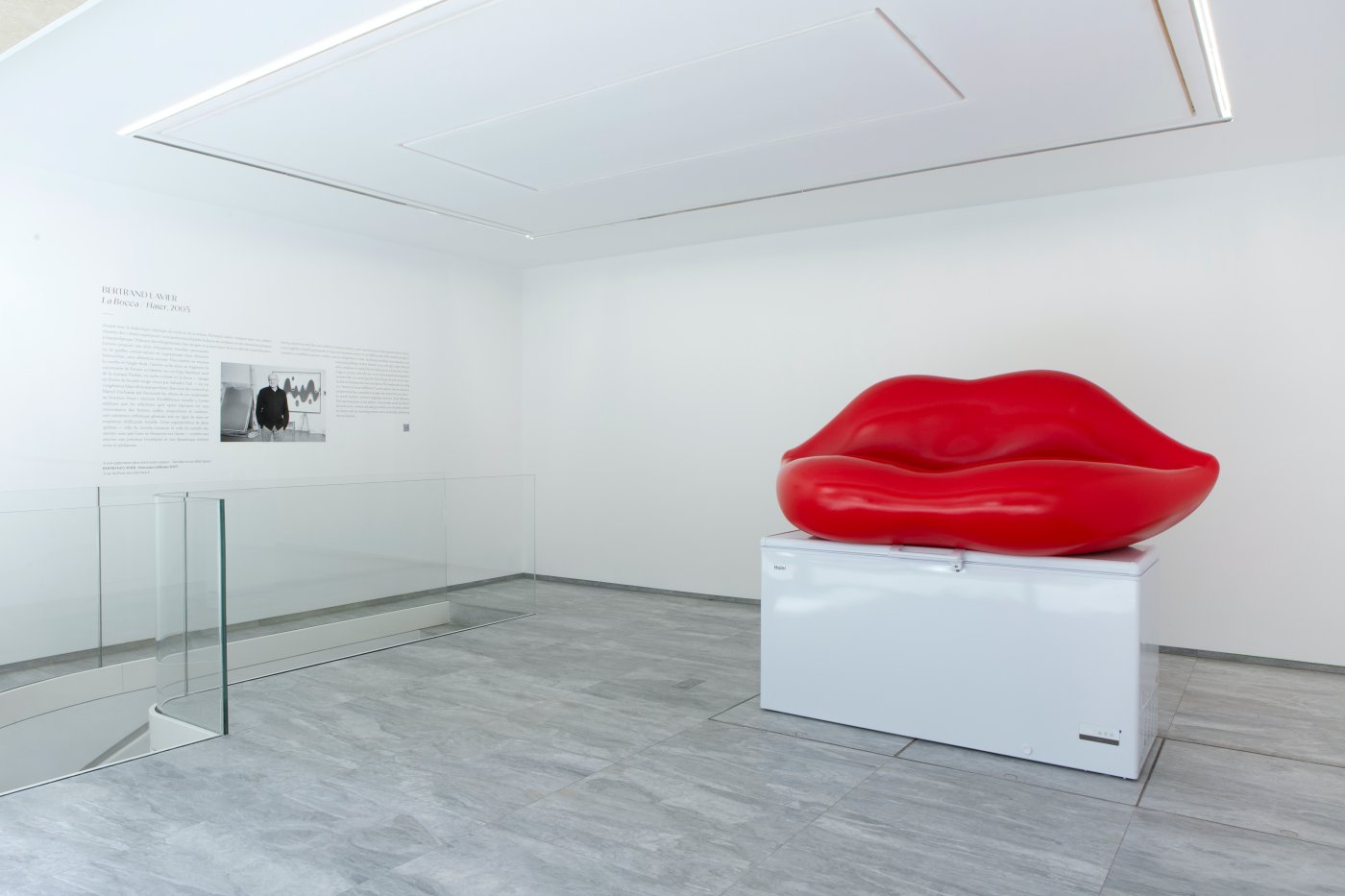 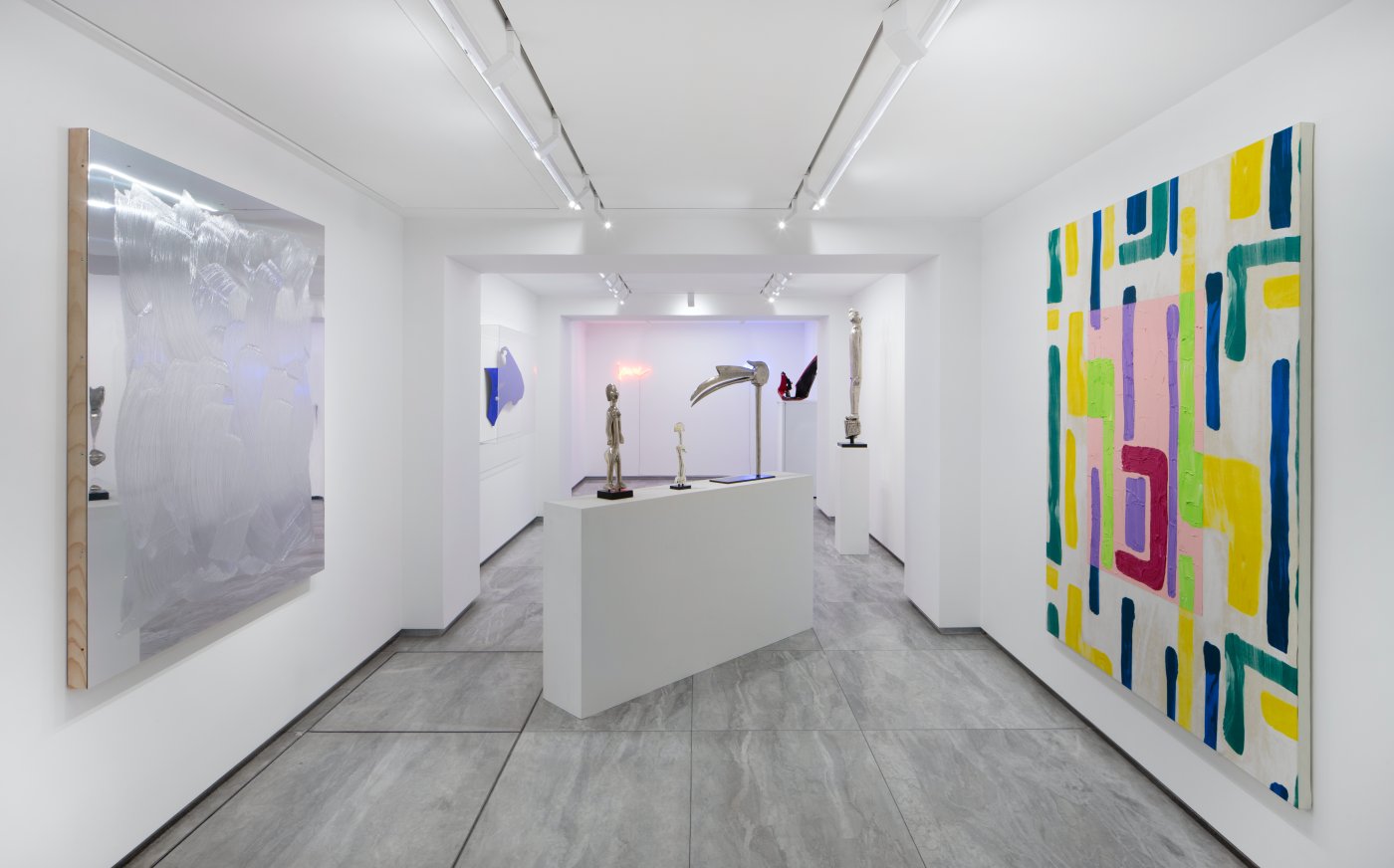 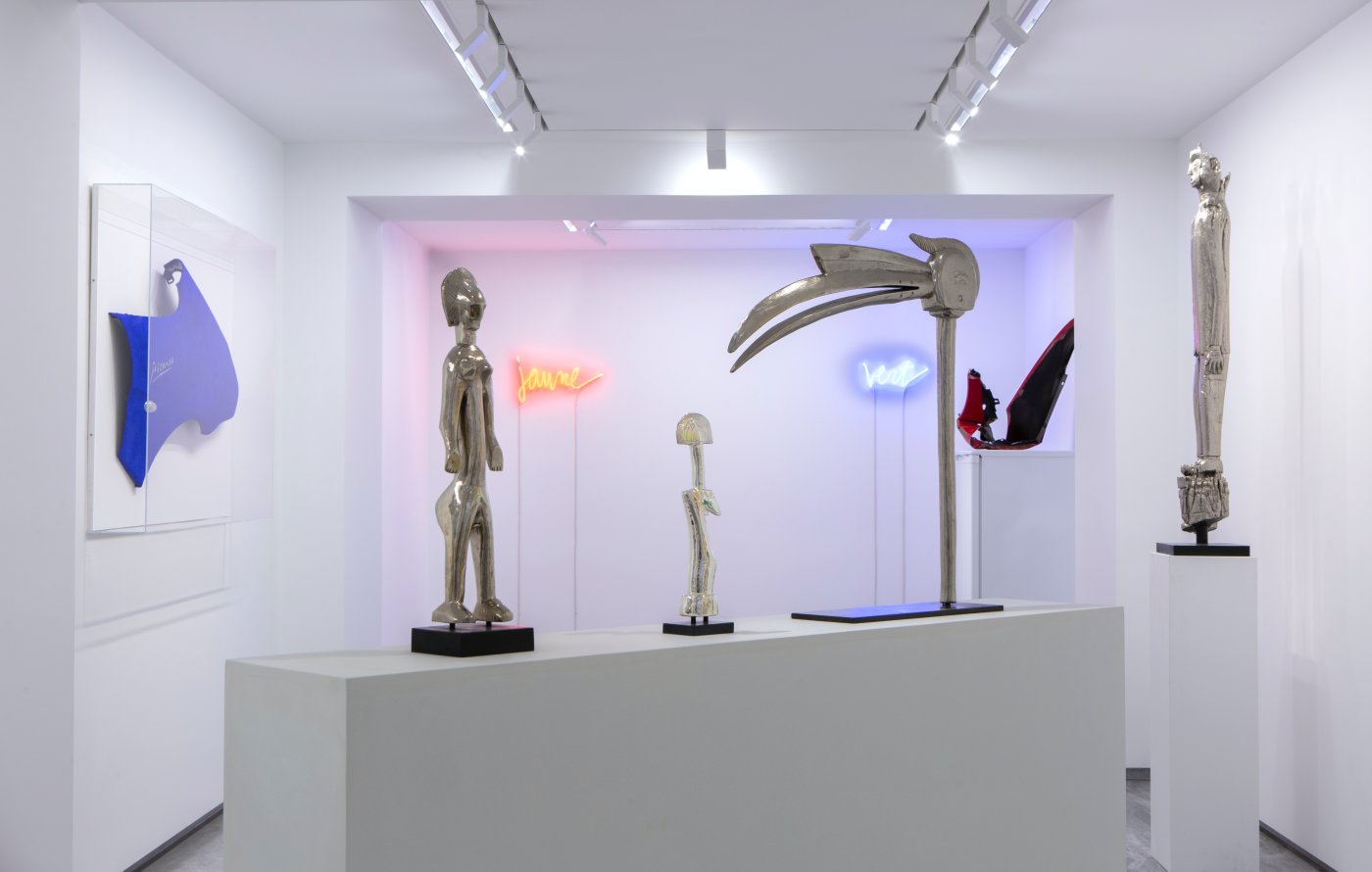 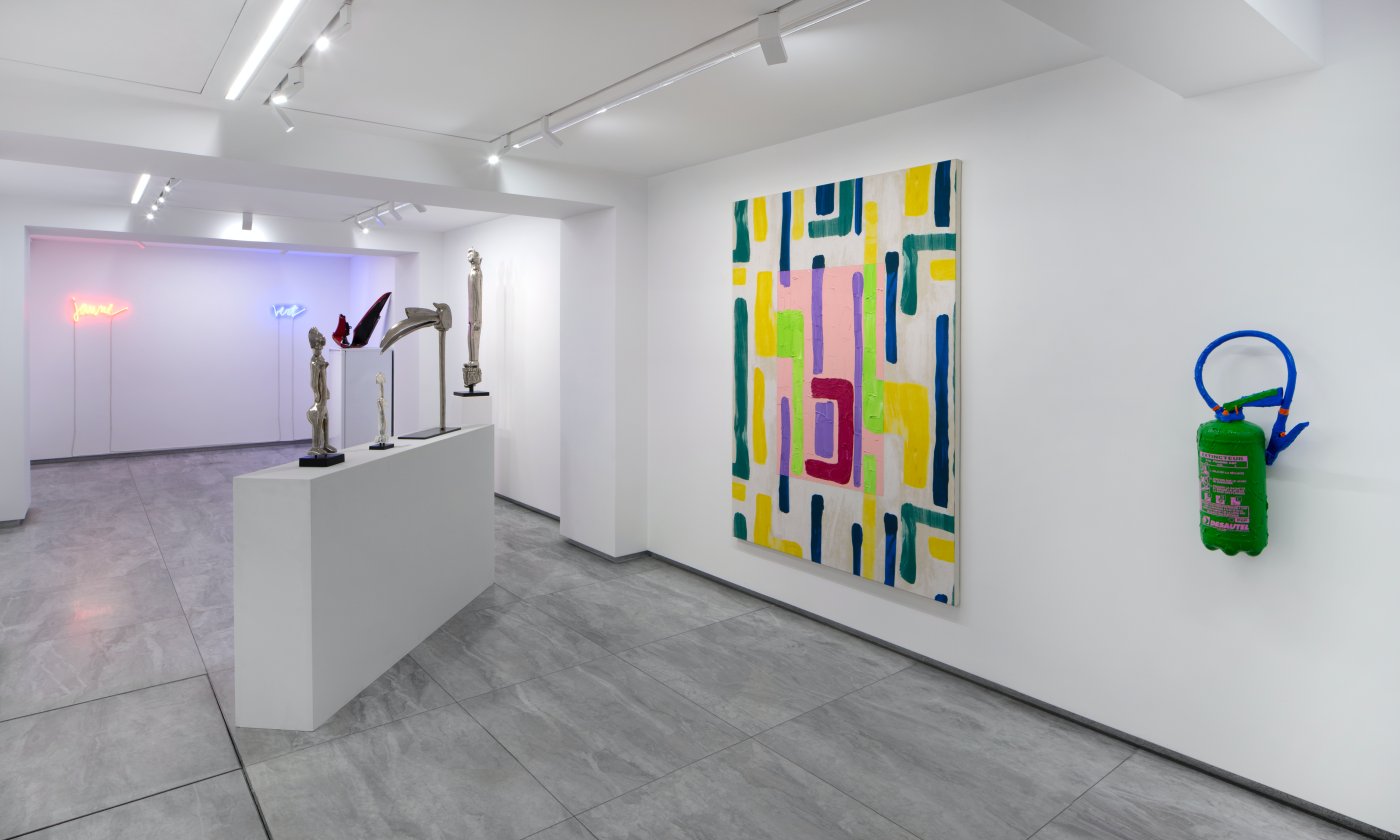 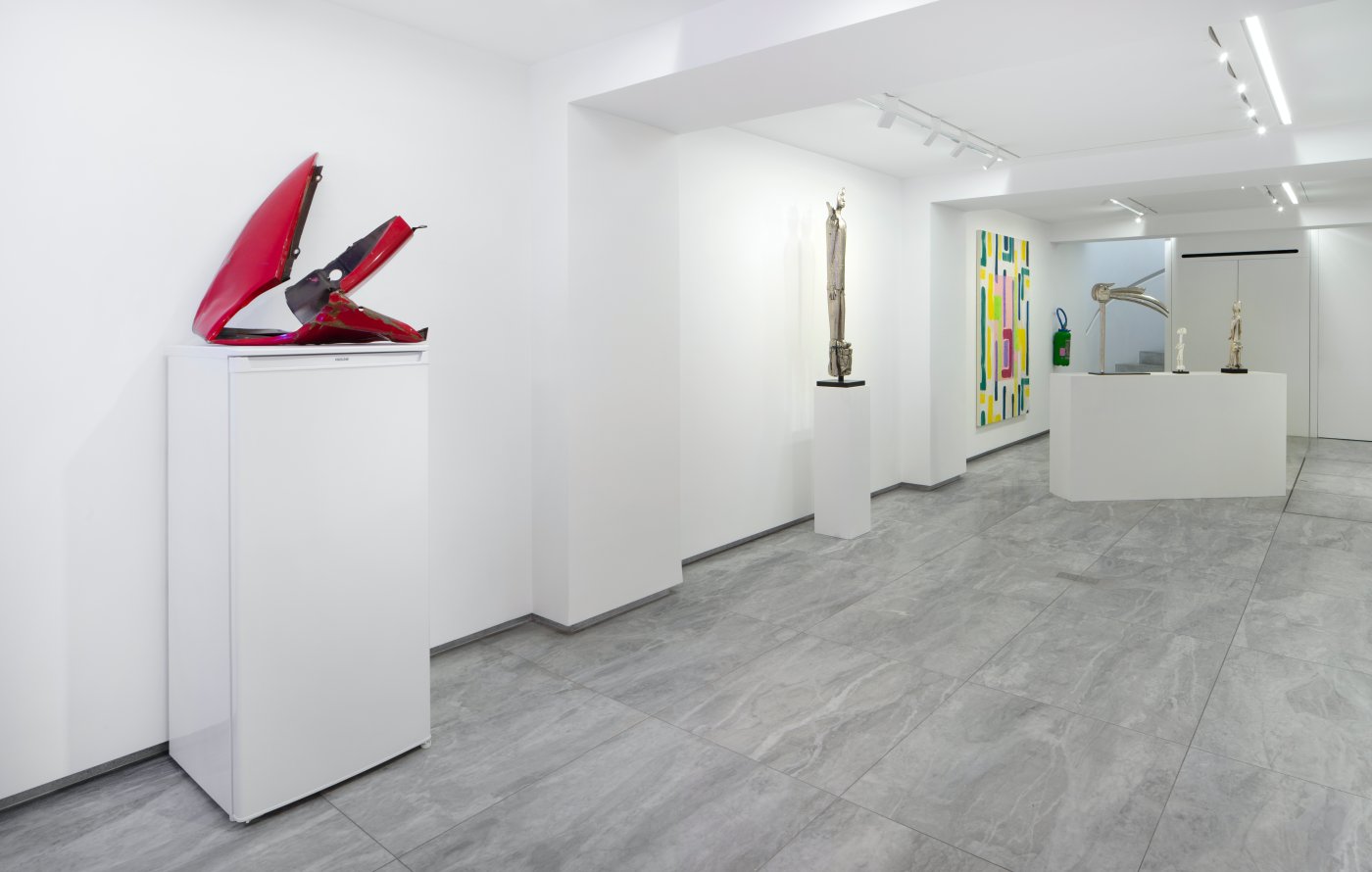 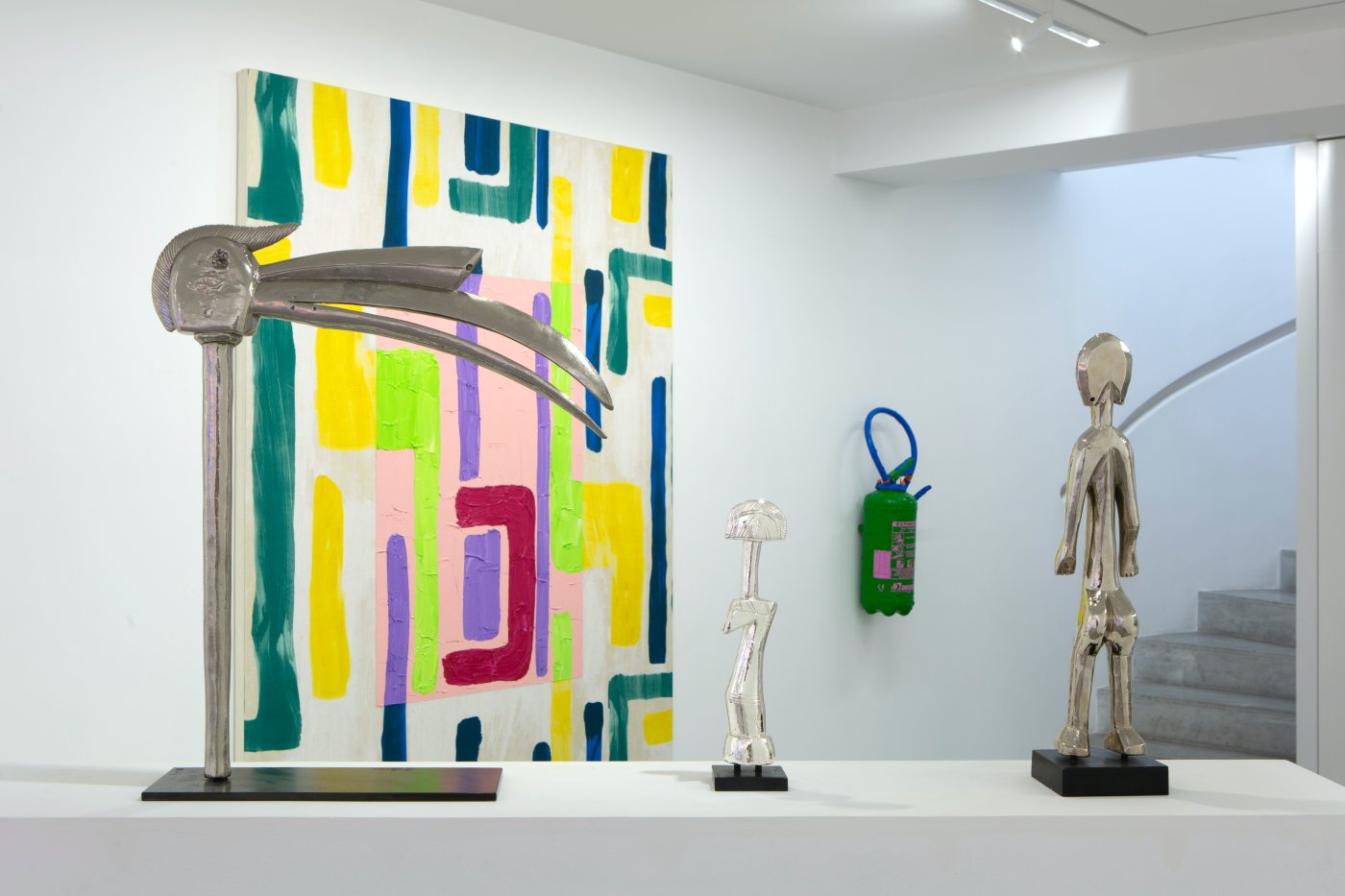 Having creative fun with the classic dialectic of statue and base, Bertrand Lavier uses his famous “superimposed objects” project to put together a small encyclopaedia of items and obsessions specific to our different eras. With stacked pairings of unrelated, unmodified consumer artefacts such as refrigerators or sofas, he proposes startling visual equations and unnatural graftings: tension between curve and right angle obtained with a fragment of crashed Ferrari bodywork on a brand new Proline fridge; or, as here, with a Bocca – a red mouth-shaped sofa designed by Salvador Dalí – on a reclining white Haier freezer. At a far remove from the Marcel Duchamp who chose the objects of his readymades according to a “reaction of visual indifference”, Lavier explains that his selections are determined by a concordance of shape, size, proportion and colour – an overall aesthetic coherence targeting maximum visual efficiency. This superimposition of two spheres – the everyday world and that of the work of art – without one taking precedence over the other, endows his choices with an unsettling presence and a powerfully exhilarating internal dynamic.

Born in 1949 in Châtillon sur Seine, Bertrand Lavier lives and works in Paris and Aignay-le-Duc, near Dijon (France).

His work has been part of numerous solo and group exhibitions around the world: at the Centre Pompidou, the Musée d’Art Moderne de Paris, the Grand Palais, the Louvre Museum, the Musée d’Orsay, at the musée du quai Branly–Jacques Chirac, the Palais de Tokyo, the Monnaie de Paris, the Bourse de Commerce–Pinault Collection and the Punta della Dogana– Pinault Collection in Venice, the Louis Vuitton Foundation in Paris and the Espace Louis Vuit-ton in Tokyo, the Château de Versailles, the Fondation Vincent van Gogh in Arles, the Con-sortium in Dijon, the Tate Gallery and the Serpentine Gallery in London, the Villa Sauber in Monaco, the Centre for Fine Arts in Brussels, at the Middelheim Museum in Antwerp, the Martin Gropius Bau in Berlin, the Haus der Kunst in Munich, the Kunsthalle Fridericianum in Kassel, the Frankfurter Kunstverein in Frankfurt am Main, the MAMCO in Geneva, the Kunsthalle in Berne, the Macro Museo d’Arte Contemporanea di Roma and the Villa Medici in Rome, the mumok museum moderner kunst stiftung ludwig wien in Vienna, the State Hermitage Museum in Saint Petersburg, the Solomon R. Guggenheim Museum, the MoMA PS1 and the Swiss Institute in New York, the Museum of Contemporary Art in San Diego, the Maison Hermès Dosan Park in Seoul, the Hong Kong Museum of Art, the Hôtel Le Bristol, Paris, as well as part of the Venice Biennale.

His work is currently exhibited at the Bourse de Commerce–Pinault Collection in Paris and at the Convent of the Jacobins in Rennes, at the Espace de l’Art Concret in Mouans-Sartoux, at the Boghossian-Villa Empain Foundation in Brussels, at the Consortium in Dijon, and soon at the Collection Lambert in Avignon.