In a dedicated subterranean space of 5 rue du Pont de Lodi, “Carte Blanche” presents paintings by Camille Henrot alongside invited artist Elizabeth Jaeger and writer in residence Estelle Hoy. While created separately, the works exhibited in this spontaneous collaboration rhyme with each other, inciting a deep psychological space in the depths of kamel mennour gallery. In response to the visual works, a collaborative sound installation between Henrot and Jaeger was made with a string and the crack of a door, creating a whistling white noise reminiscent of sounds heard when in the womb. 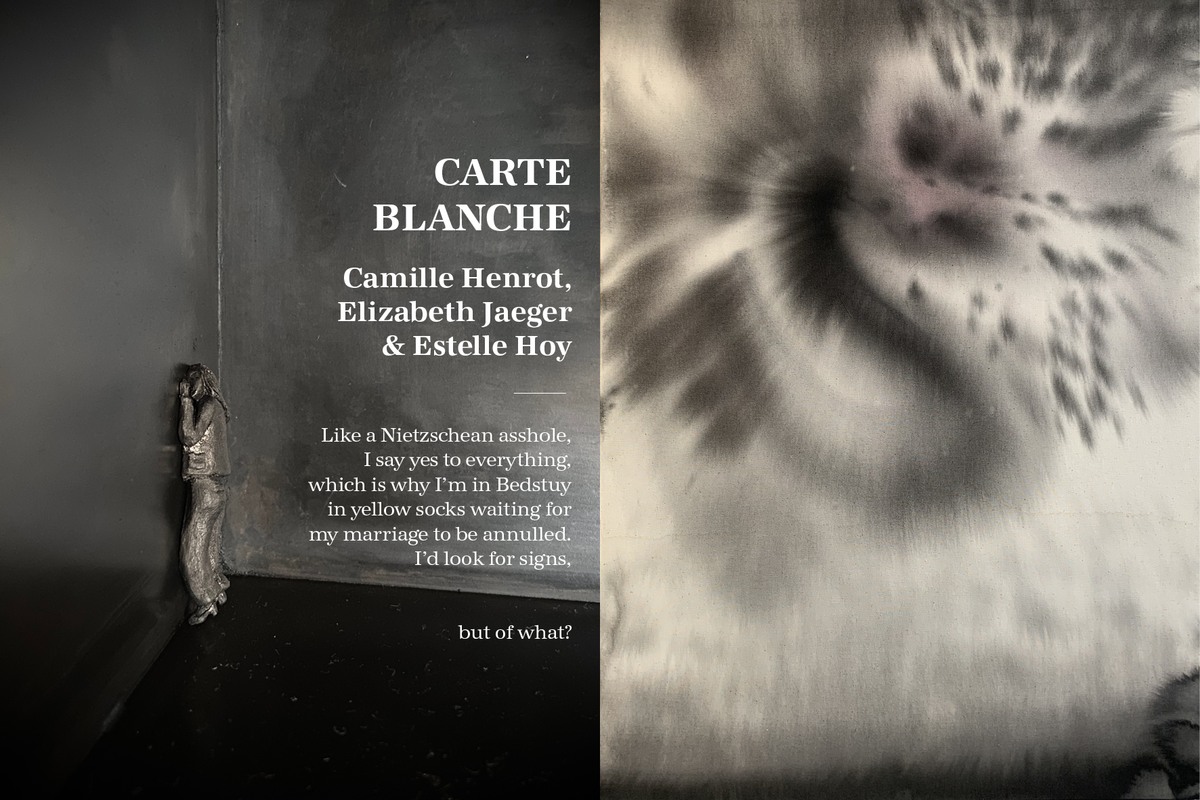 Presented alongside paintings by Henrot, Jaeger’s sculptures further explore the angst of interiority and the relationship between corporality, perception, consciousness and emotion. The walls are inhabited by anthropomorphic black ceramic vessels, placed on steel structures in a game of surreal balances. The diffuse emotionality radiated by the vases is consciously broken by the hardness and severity of the metal plates. The miniatures alongside contain characters placed within organic seemingly claustrophobic forms. Some manifest expressions of pure existential dread, while others feature closed narratives– stories that are observed but whose details remain private.

Estelle Hoy presents texts in the gallery space that will also be published on the kamel mennour Instagram account as a weekly ‘feuilleton’ throughout the duration of the exhibition. Told through the voice of an unreliable, amorphic narrator, Hoy’s character(s) seem to enact all of the multiple, conflicting impulses and emotions of everyday life and of our modern times.

Born in 1978 in Paris, CAMILLE HENROT lives and works between Berlin and New York City.

The practice of French artist Camille Henrot moves seamlessly between film, painting, drawing, bronze, sculpture and installation. Henrot draws upon references from literature, psychoanalysis, social media, cultural anthropology, self-help, and the banality of everyday life in order to question what it means to be both a private individual and a global subject in an increasingly connected and over-stimulated world.

A 2013 fellowship at the Smithsonian Institute resulted in her film Grosse Fatigue, for which she was awarded the Silver Lion at the 55th Venice Biennale. She elaborated ideas from Grosse Fatigue to conceive her acclaimed 2014 installation “The Pale Fox” at Chisenhale Gallery in London. The exhibit, which displayed the breadth of her diverse output, went on to travel to institutions including Kunsthal Charlottenburg, Copenhagen; Bétonsalon – Centre for art and research, Paris; Westfälischer Kunstverein, Münster, Germany; and Tokyo Opera City Art Gallery, Japan. In 2017, Henrot was given carte blanche at Palais de Tokyo in Paris, where she presented the major exhibition ‘Days Are Dogs’. She is the recipient of the 2014 Nam June Paik Award and the 2015 Edvard Munch Award, and has participated in the Lyon, Berlin, Sydney and Liverpool Biennials, among others.

ELIZABETH JAEGER is an artist based in Brooklyn, NY. Her most recent solo exhibitions include: “Itself and Else”, Klemm’s Gallery, Berlin; “Piece of Cake”, Night Gallery, Los Angeles; “Holes”, Jack Hanley Gallery, New York, US; “Gutted”, Mister Fahrenheit, New York, US. Her works have also been on view in numerous group shows, such as the Sprengel Museum, Whitney Museum of American Art; “Greater New York” at MoMA’s PS1; “Practice: Fantasy Can Invent Nothing New” at Sculpture Center, NY, and the Aspen Art Museum.

ESTELLE HOY is a critically acclaimed writer and art critic based in Berlin. Her award-winning book Pisti, 80 Rue de Belleville, was published in 2020 by After 8 Books (Paris) with an introduction by Chris Kraus. She is currently working on a collaborative book and exhibition, ‘The Orange Grove’ with Camille Henrot. Hoy regularly publishes in singular art magazines.