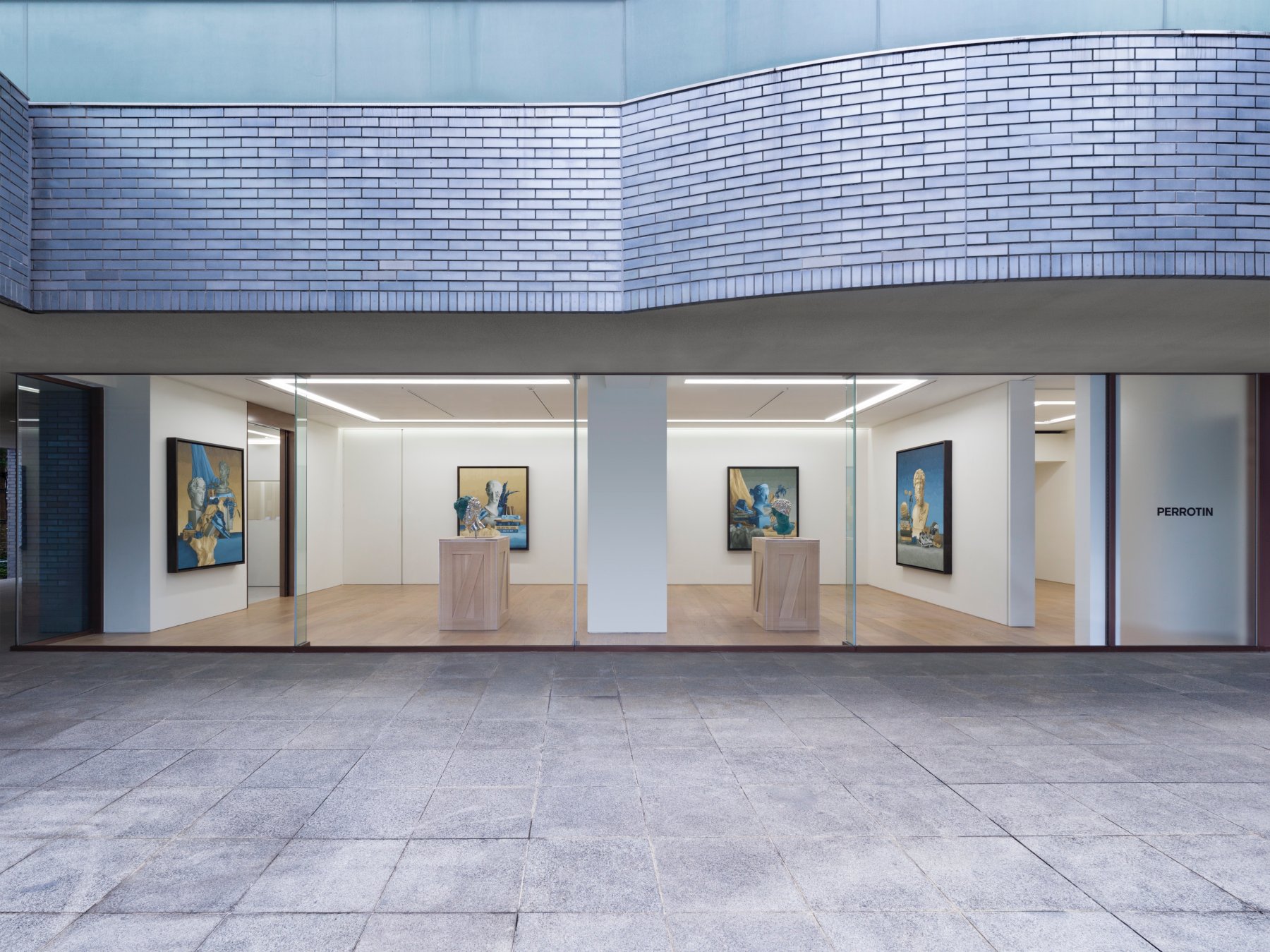 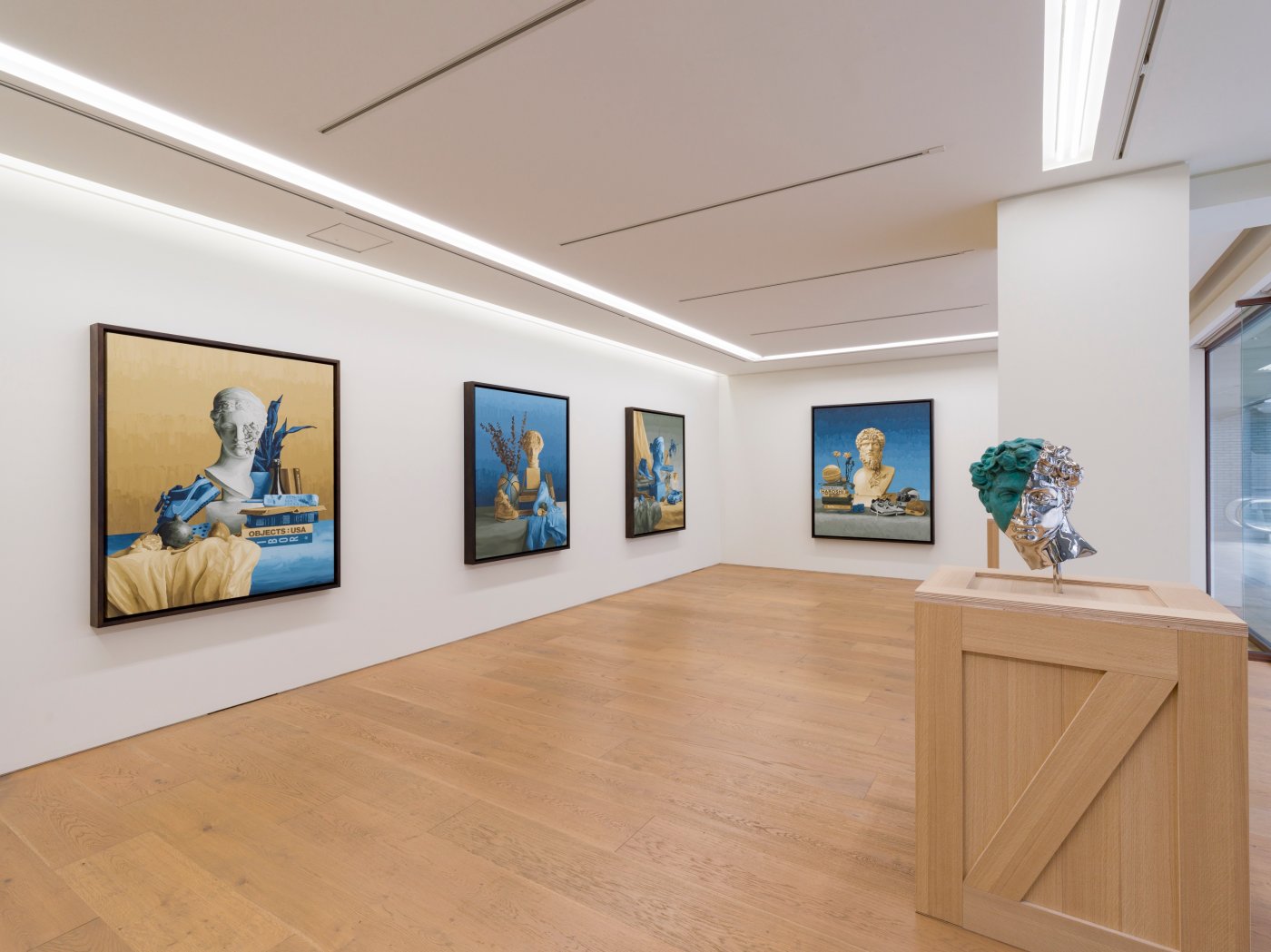 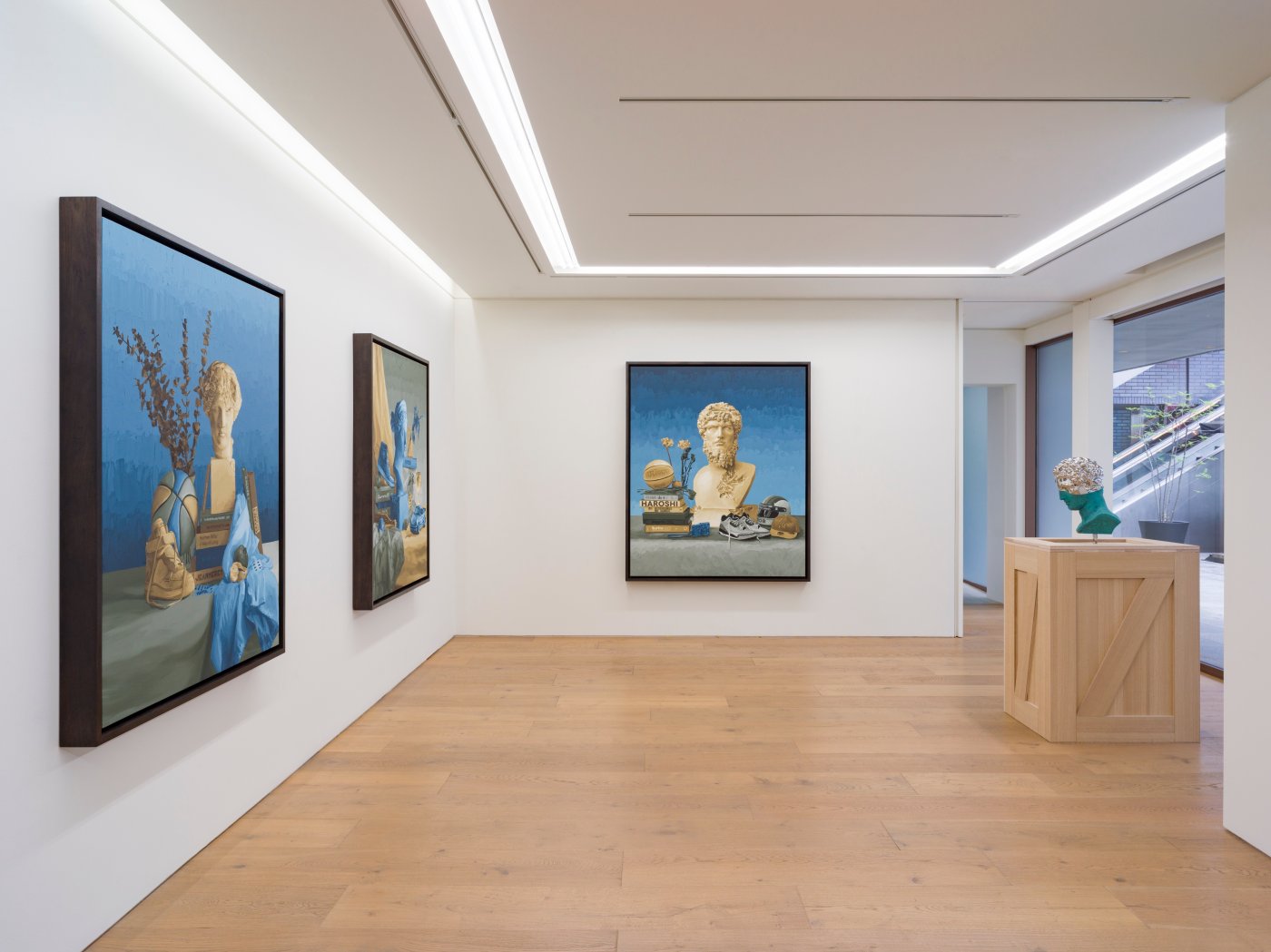 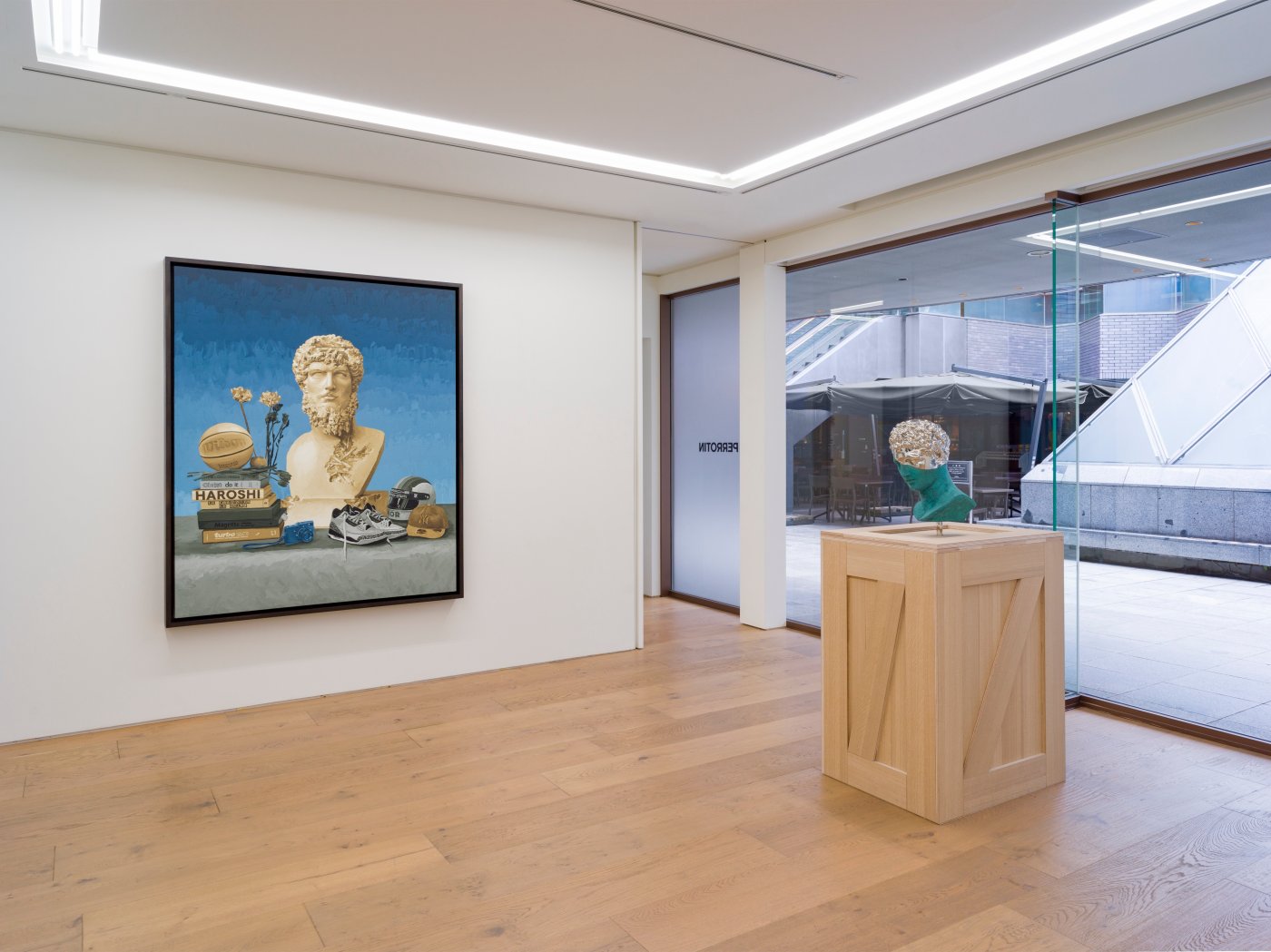 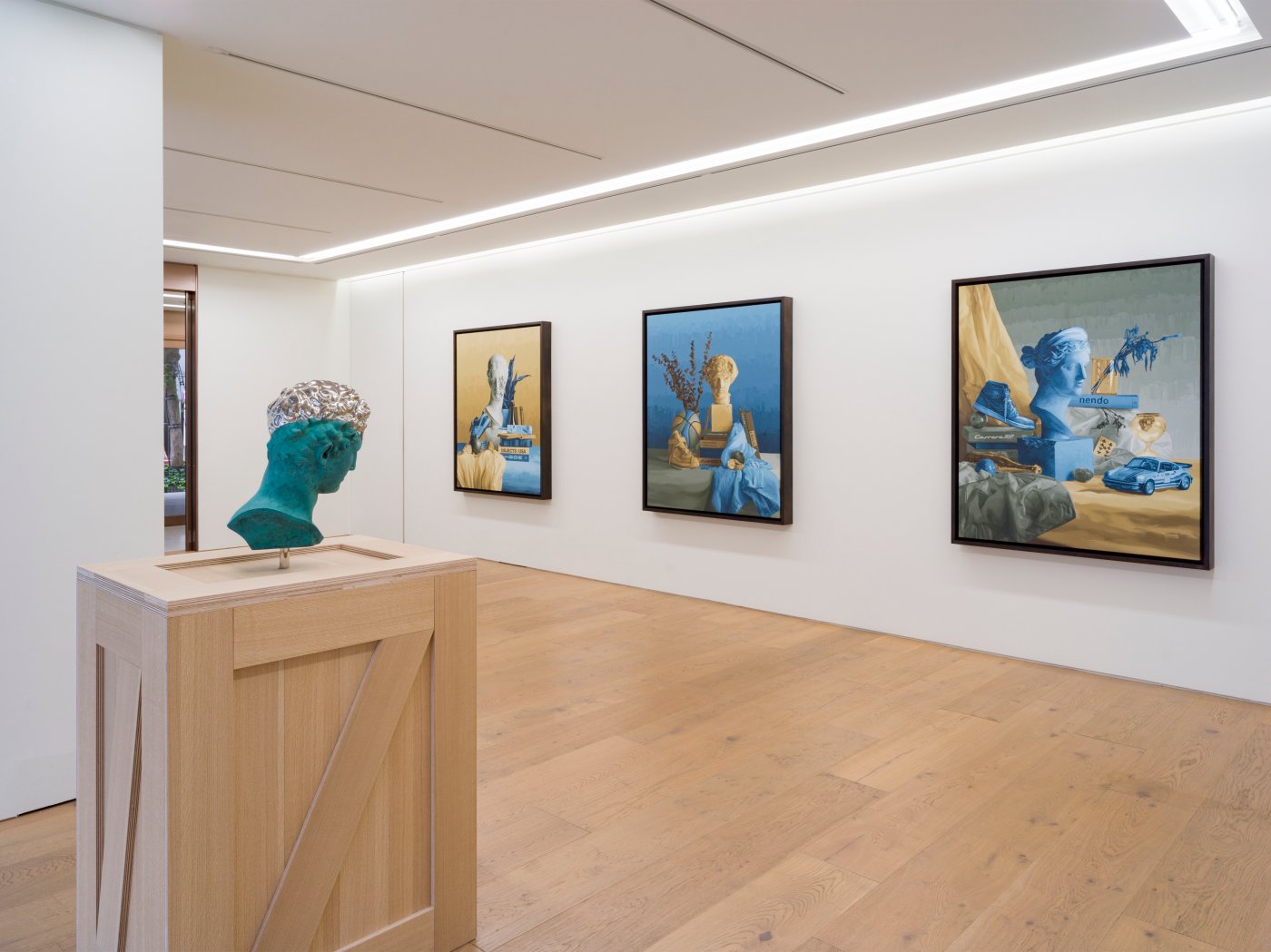 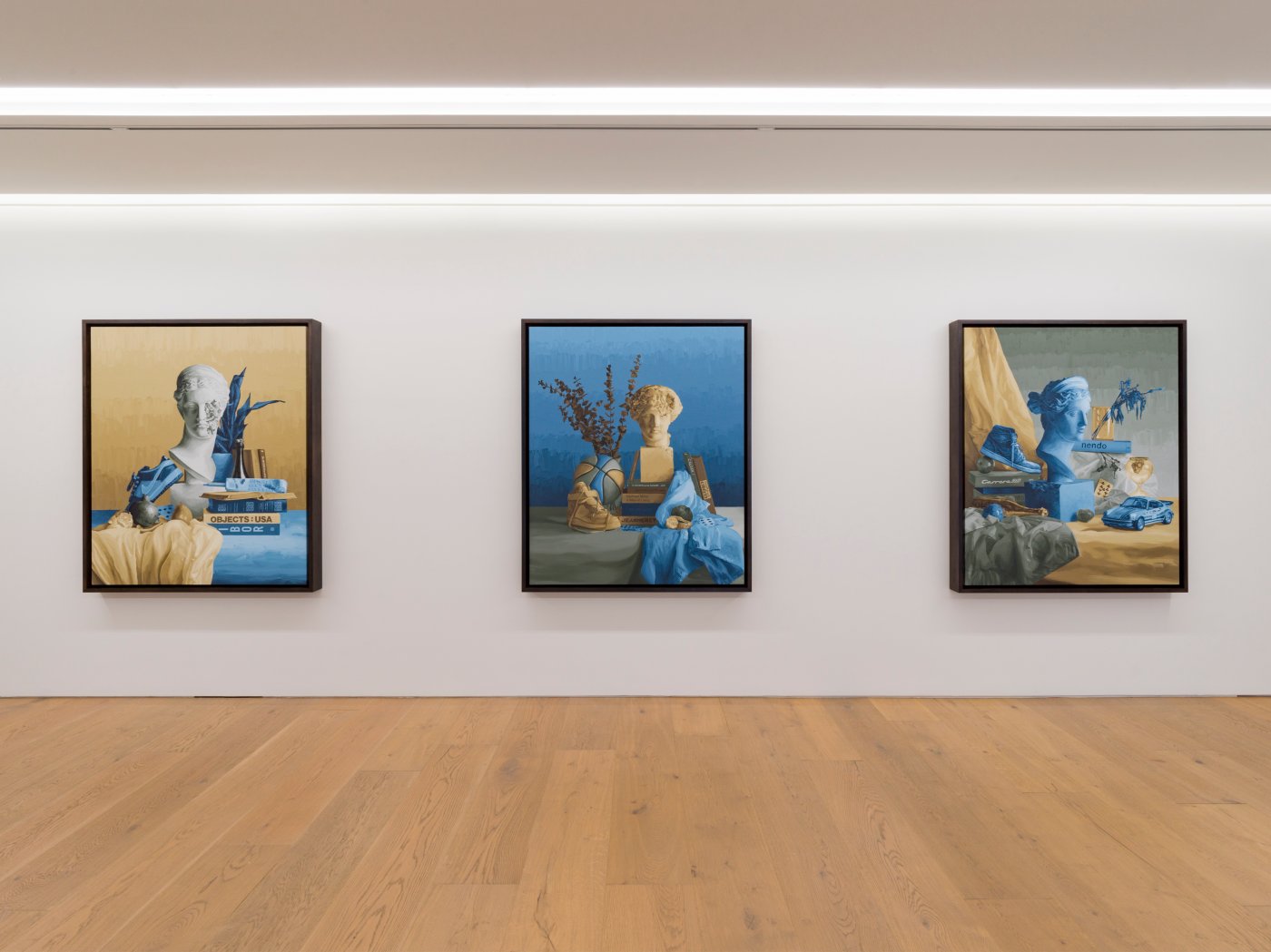 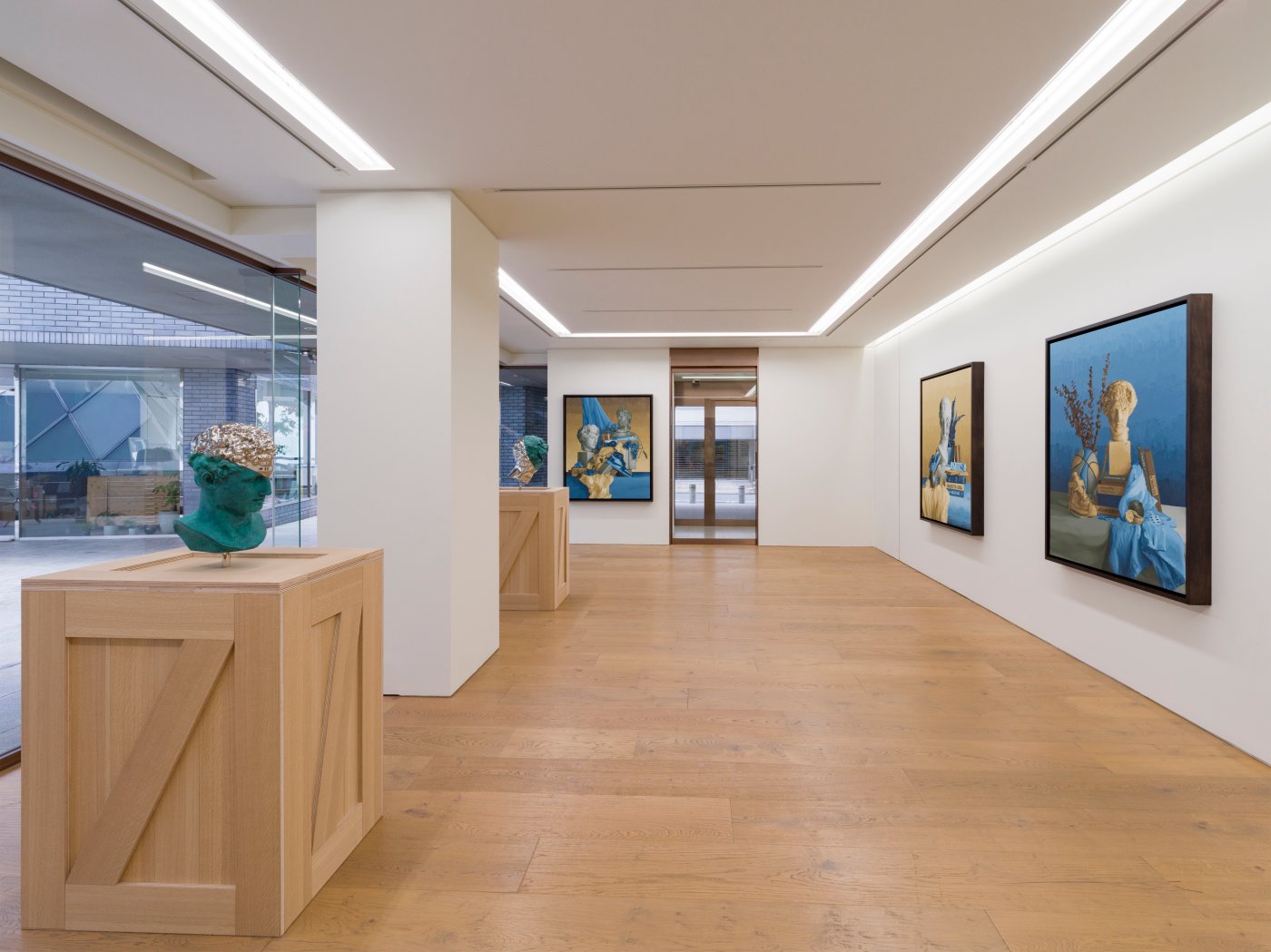 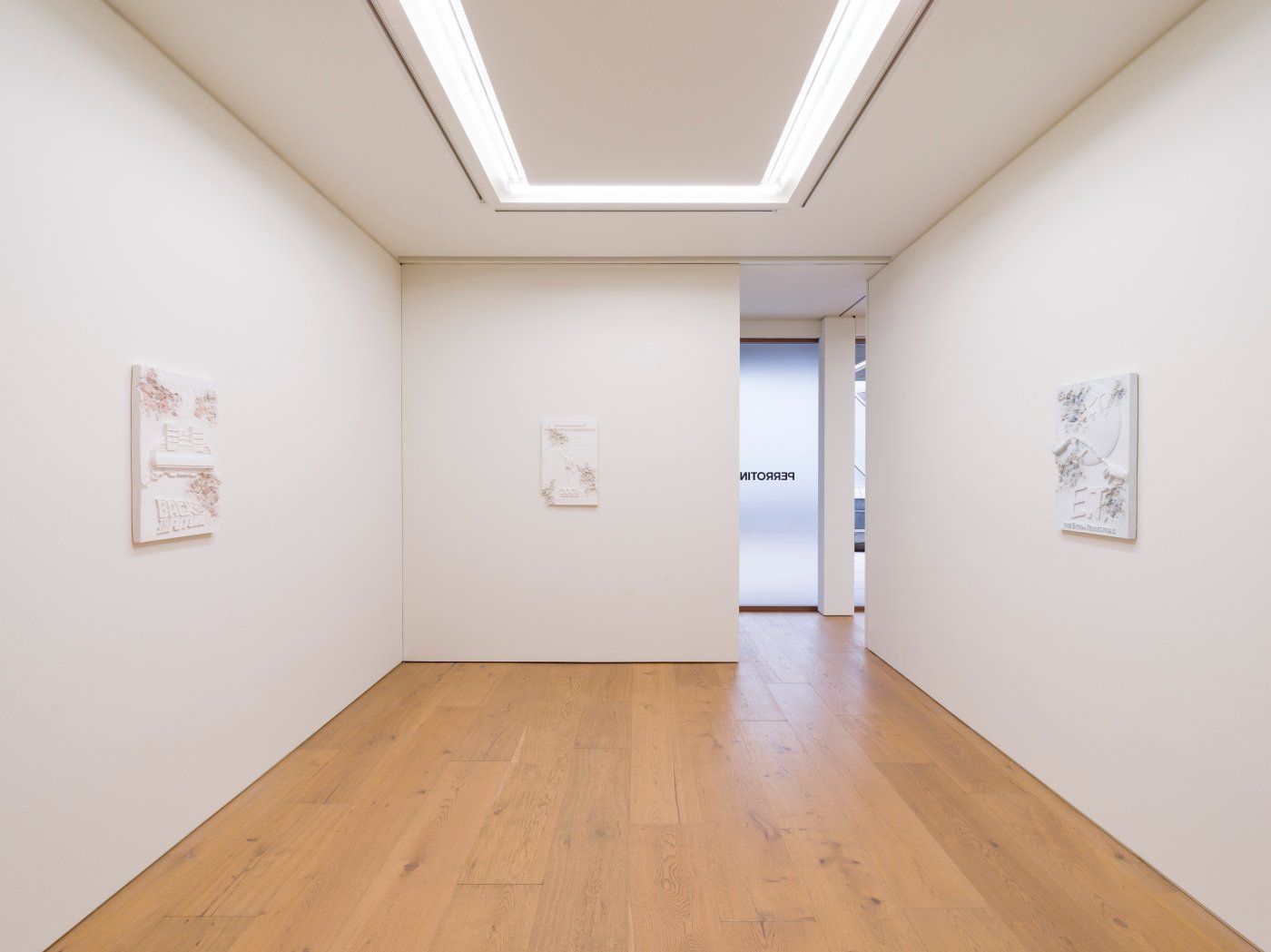 Flanking the front windows, the artist debuts two new sculptures from a series of amalgamated metals, hybridized forms between bronze and stainless steel. In the adjacent gallery, three movie posters from Arsham’s series on fictional archaeology are presented in his signature geological materials of hydrostone with blue calcite and quartz crystals.

From Pieter Claesz to Paul Cezanne, still life painting has been a favored genre of contemporary painters illustrating interests, innovations, and objects from everyday life since the fifteenth century. In Arsham’s debut of this new series of paintings, he draws from his own index of artifacts and iconography, building up intricate scenes with a lush impasto style of painting. In recent bodies of work, Arsham has meditated on antique statuary, reimagining these iconic figures in geological materials. In Still Life with Bust of Apollo, Arsham brings his own crystallized sculpture of the Greek god into the picture plane. Recognized for his idyllic form and many talents from sport and performance to his affinity for healing, Apollo is perched atop a tower of novels and catalogs that inform a diversity of interests from Herman Miller’s A Way of Living to Jeanneret’s monograph on architecture and interior design. Arsham frames the scene in lush boules of fabric, alongside Air Jordan sneakers and a multi-colored basketball that balances against the other elements. In each painting, Arsham weaves together contemporary interests, curiosities and aspirations that transcend the artist’s personal affinities to create layered narratives.

Installed nearby, Arsham presents two new sculptures of the Greek god Hermes and the Italian nobleman Giuliano de’ Medici. Each sculpture is iconic in its own rite, drawing from sculptures dating from Antiquity to the Renaissance. In the representation of Hermes, Arsham reimagines a sculpture of the Greek god from the fourth century B.C. that is housed in the collections of the Archaeological Museum of Olympia, Greece. The second sculpture of Julien, Duke of Nemours isolates a portion of a larger sculpture by Michaelangelo housed in the church of San Lorenzo in Florence. Re-casting these sculptures in a hybridized form between bronze and polished stainless steel, Arsham presents the works as if suspended between a state of decay and regeneration.

In the adjacent gallery, three hydrostone movie posters represent the films E.T., Back to the Future, and 2001: A Space Odyssey. These posters that once adorned movie preview placards and the walls of infectious fans, have become artifacts of the past. Arsham recasts them in geological crystals, as if uncovered in a state of entropy.

Arsham has concurrent exhibitions at MAMO Cité Radieuse Arts Center, Marseille, France, Saatchi Gallery and 180 the Strand, London, United Kingdom, and the LongHouse Reserve, East Hampton, New York, USA. Arsham will be the subject of a solo exhibition at the Yorkshire Sculpture Park, and his work will be presented at the Centre Pompidou-Metz, France, Fall 2022.