Almine Rech New York presents Ocotillo Song, an exhibition of new works by the artist Daniel Gibson. This is Gibson’s second solo exhibition with the gallery. 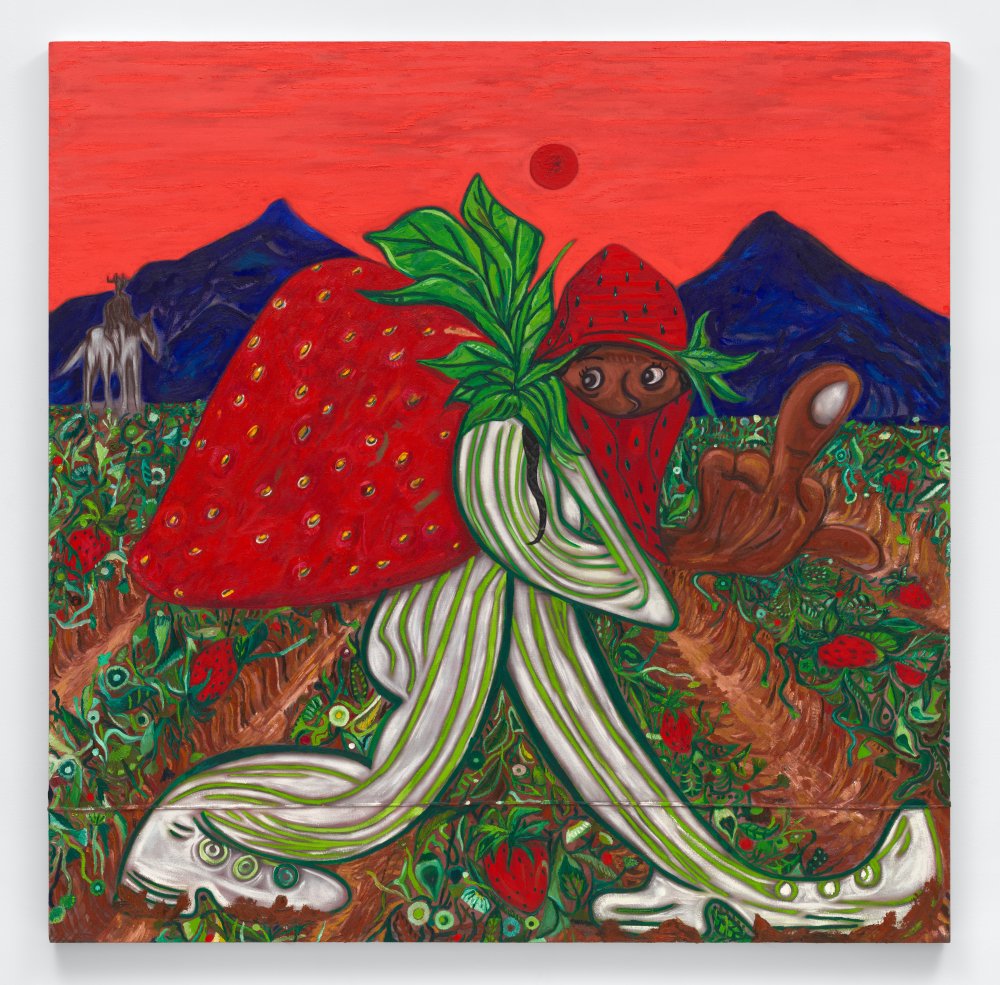 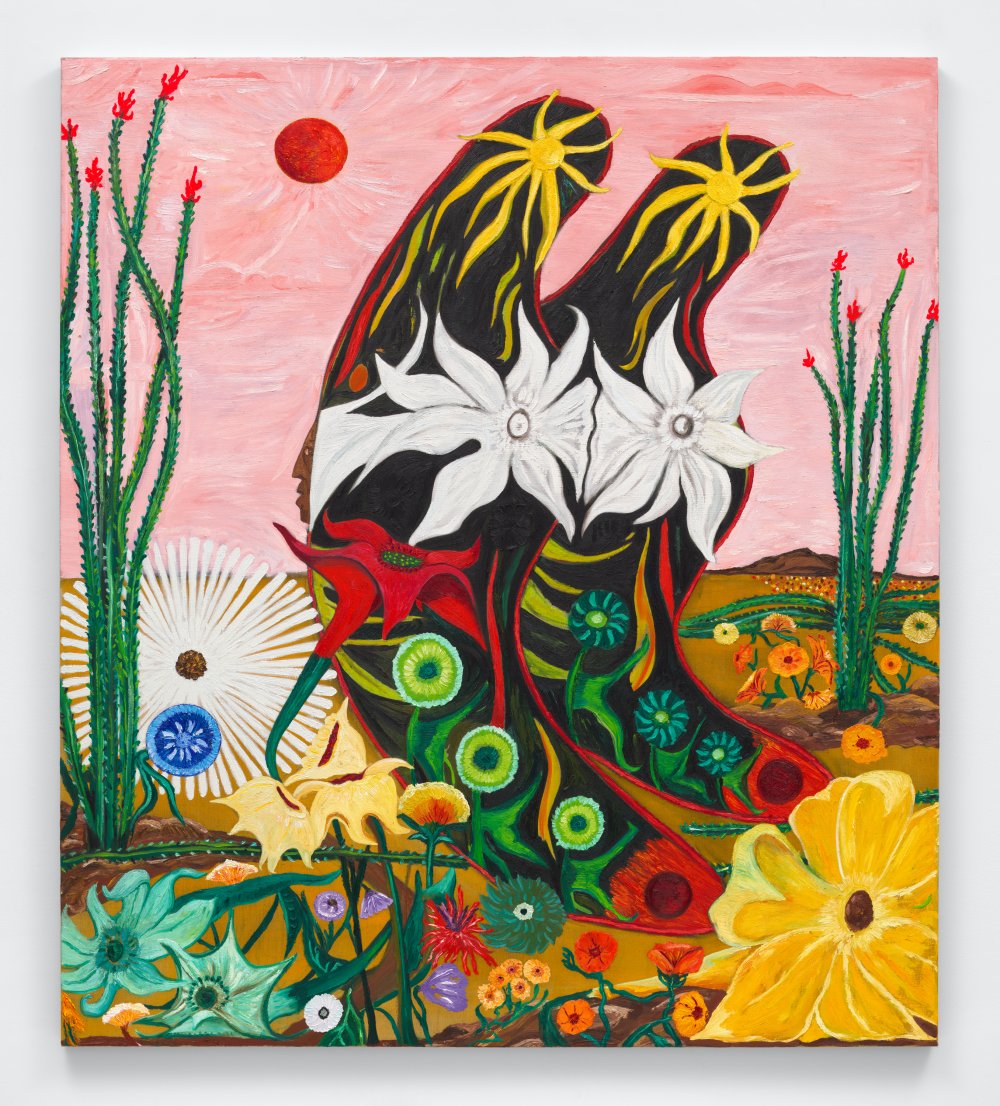 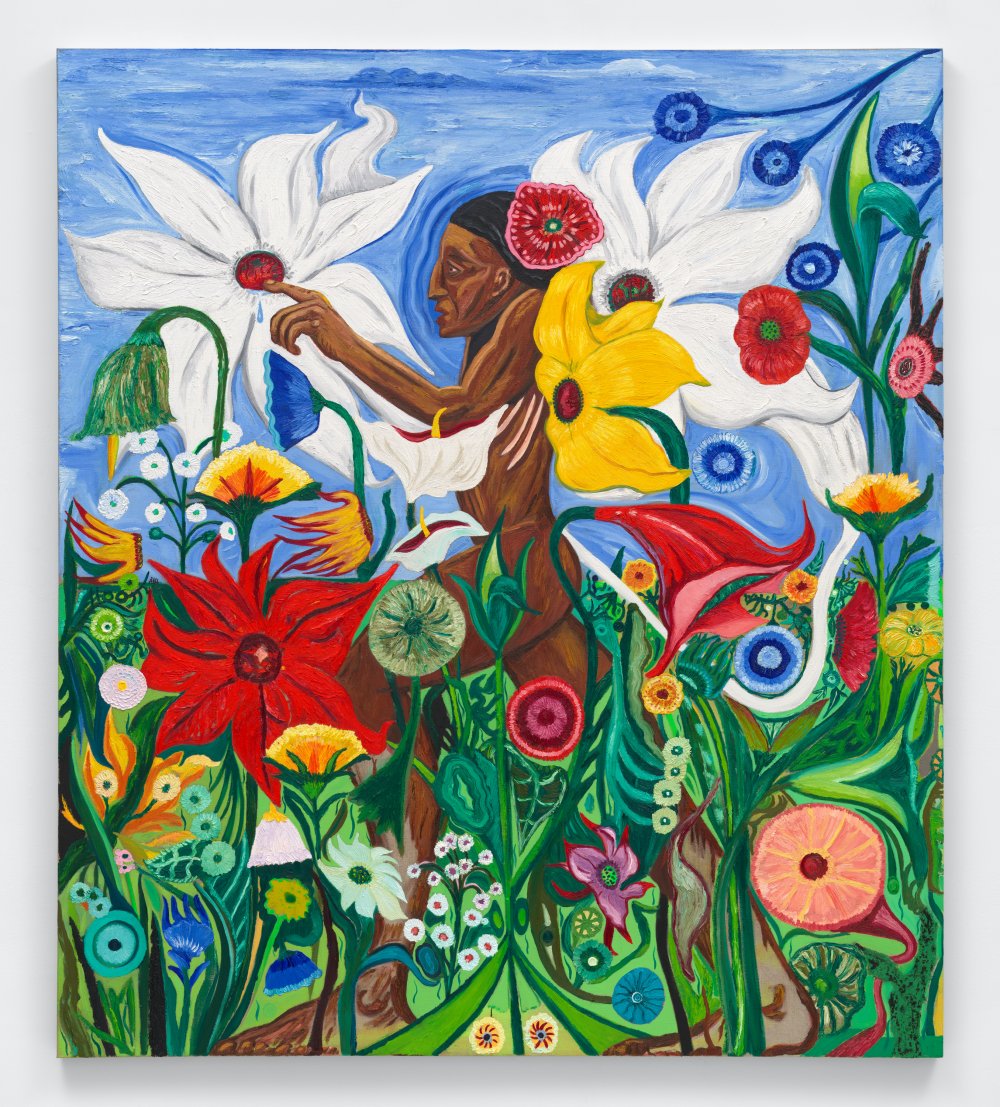 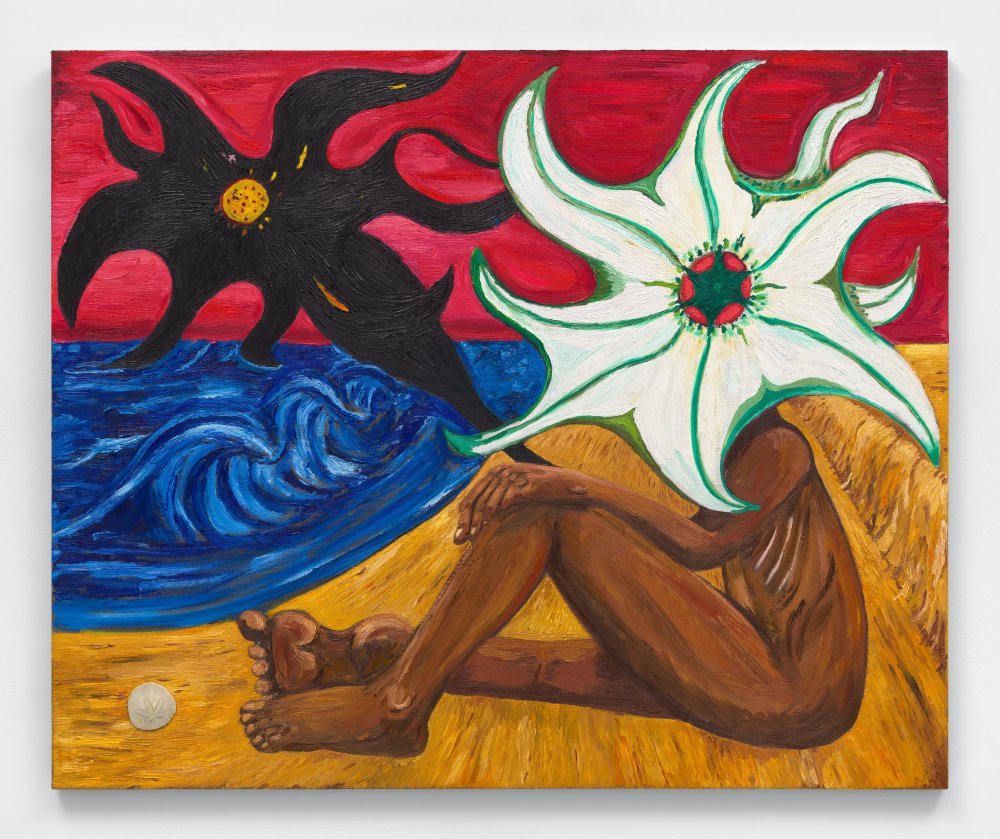 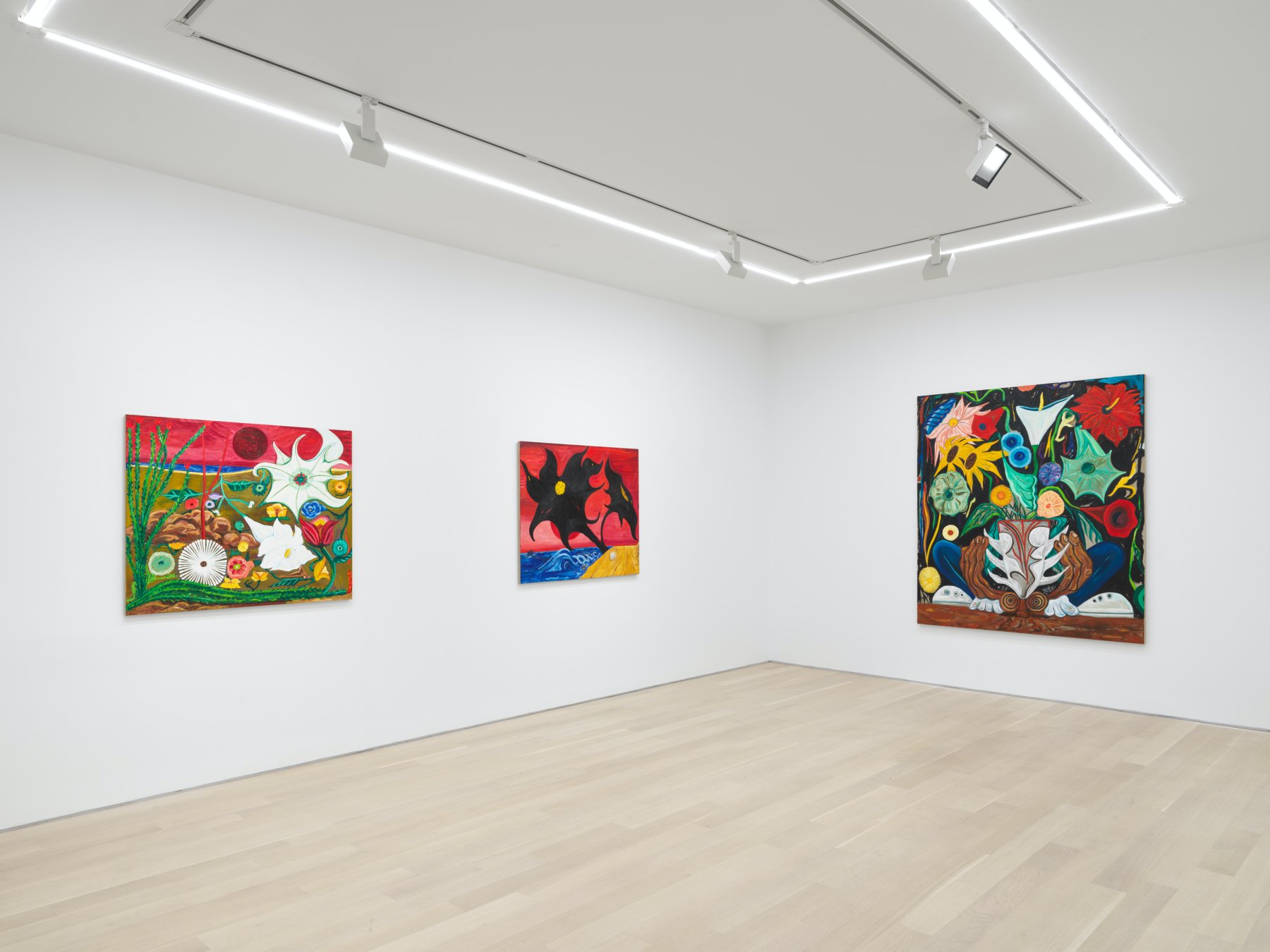 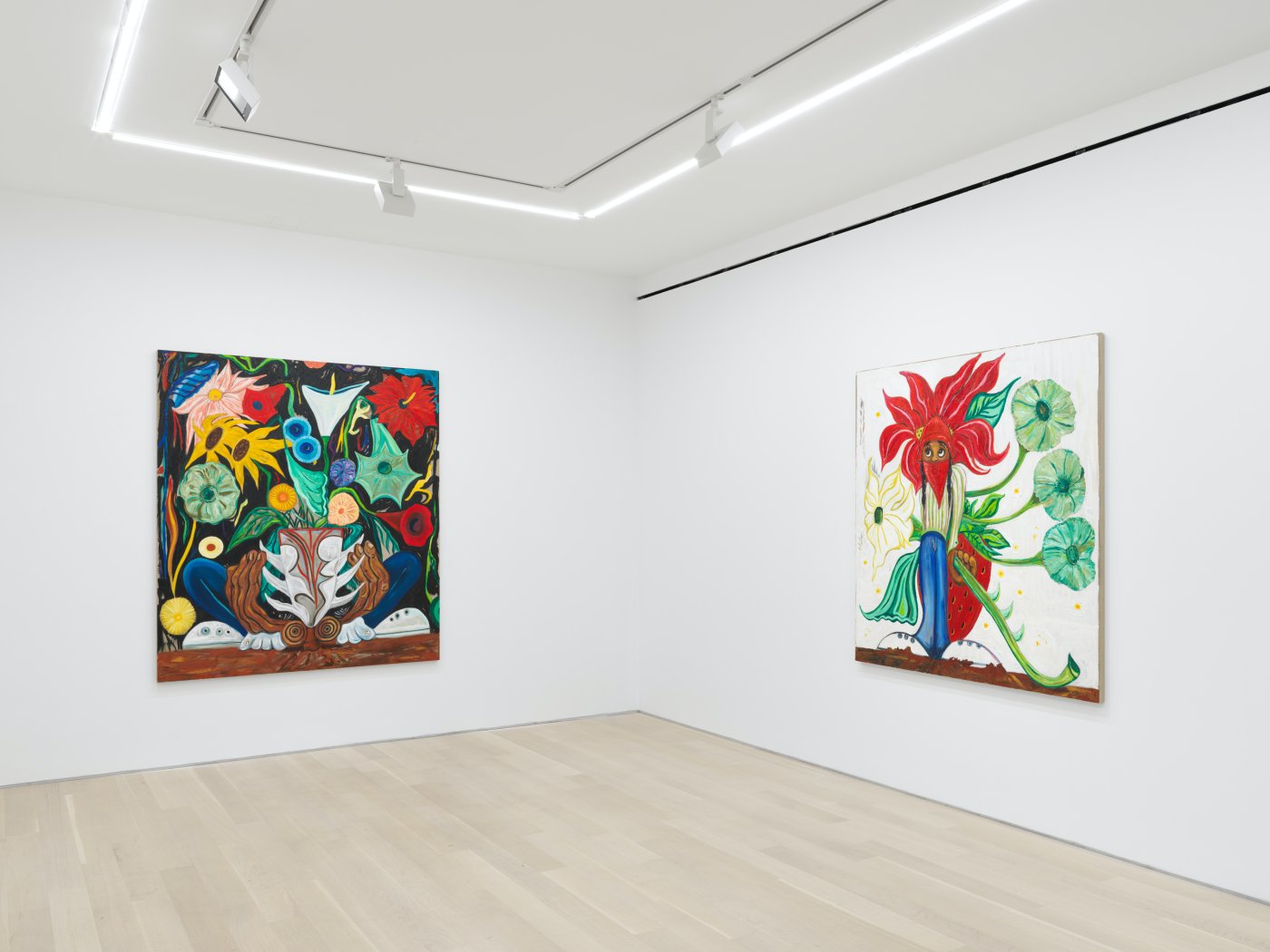 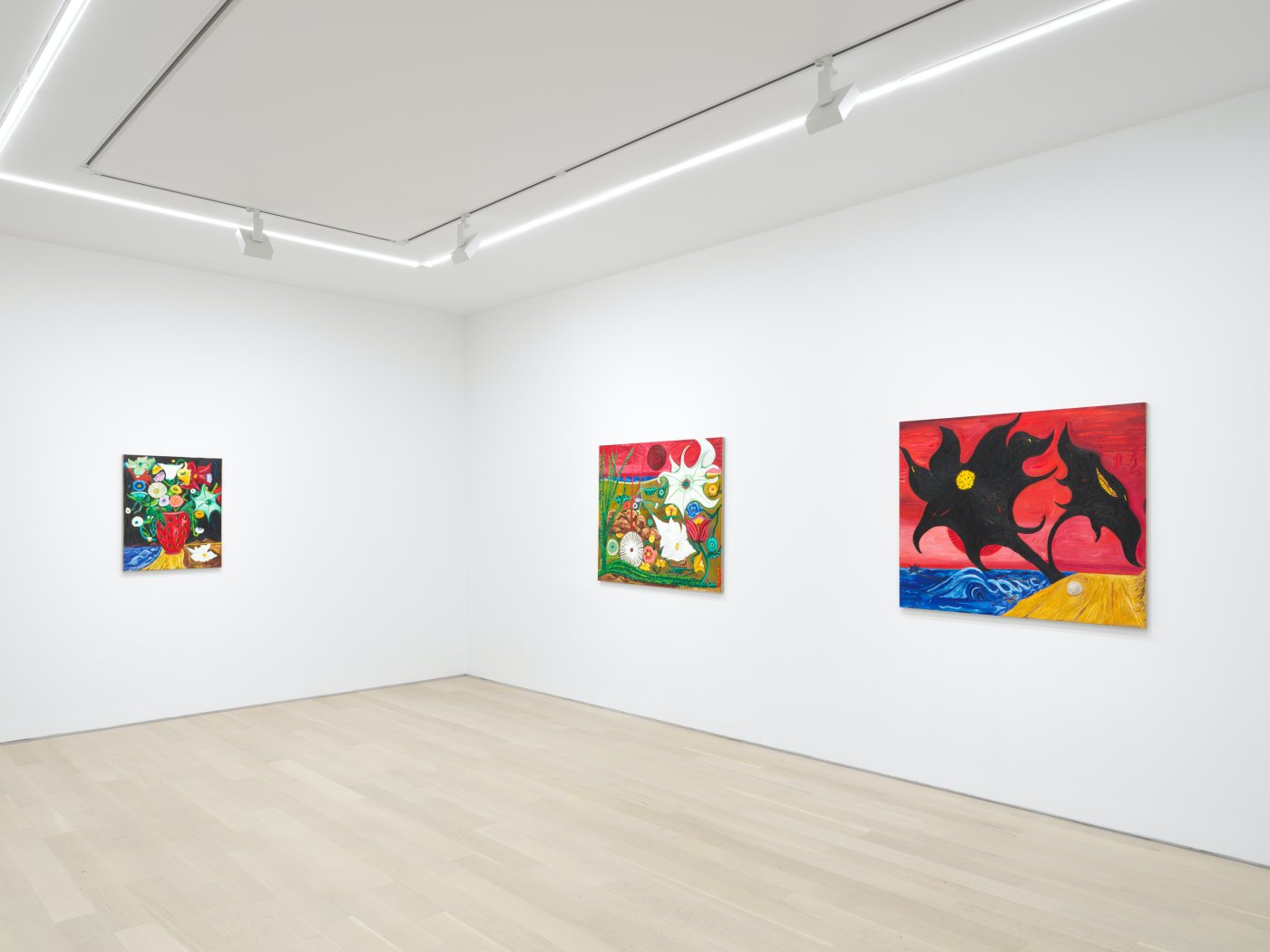 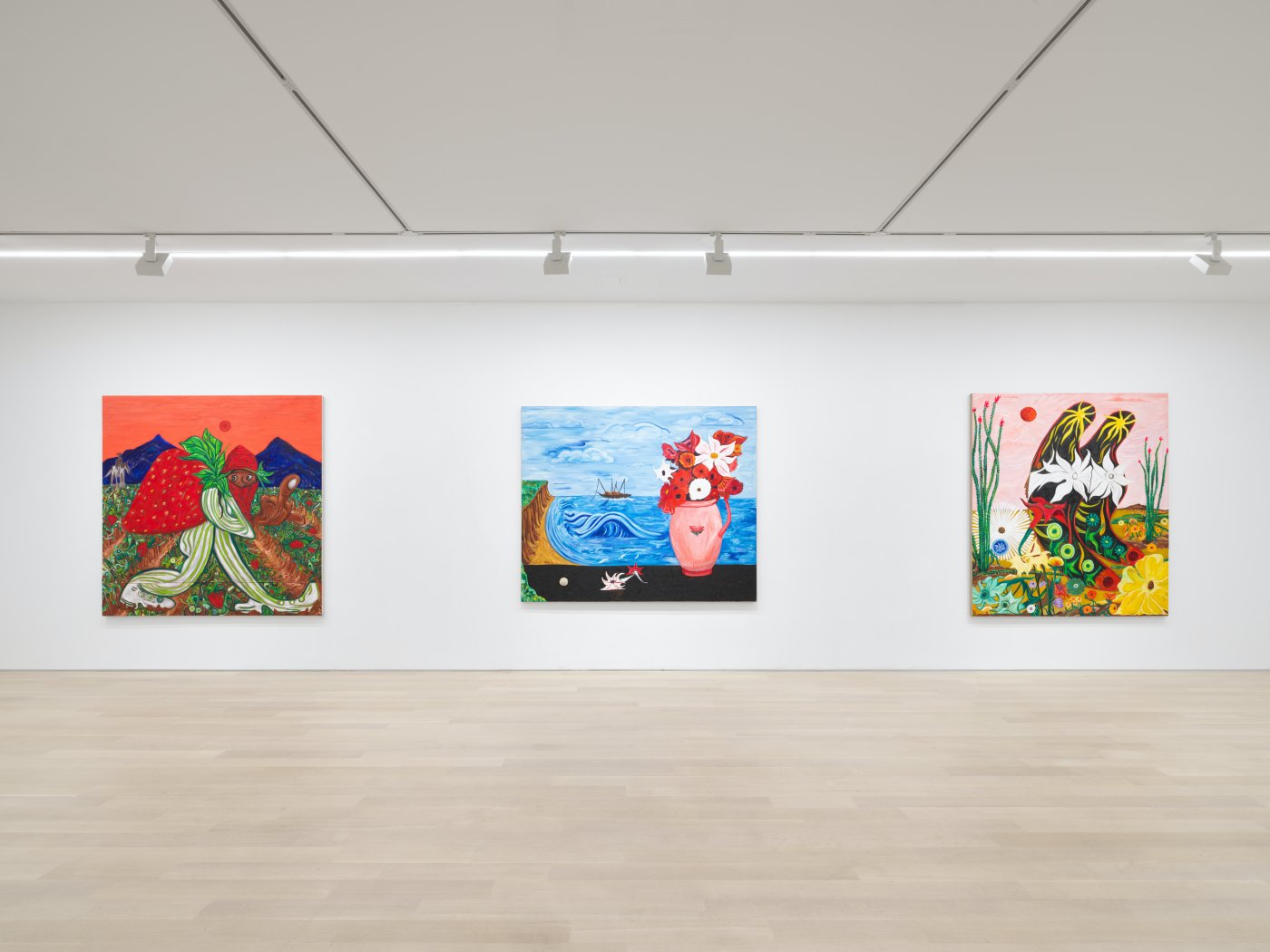 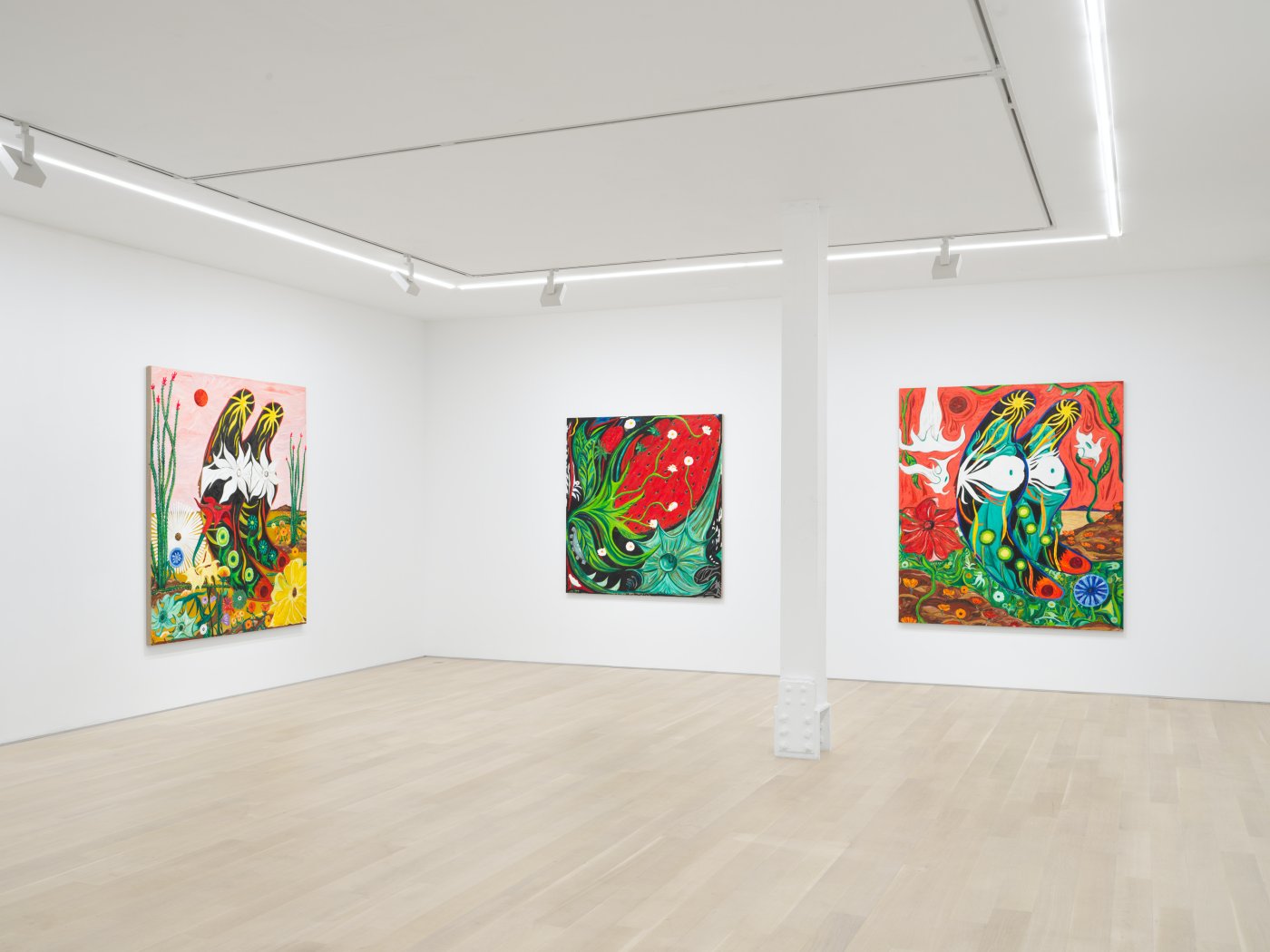 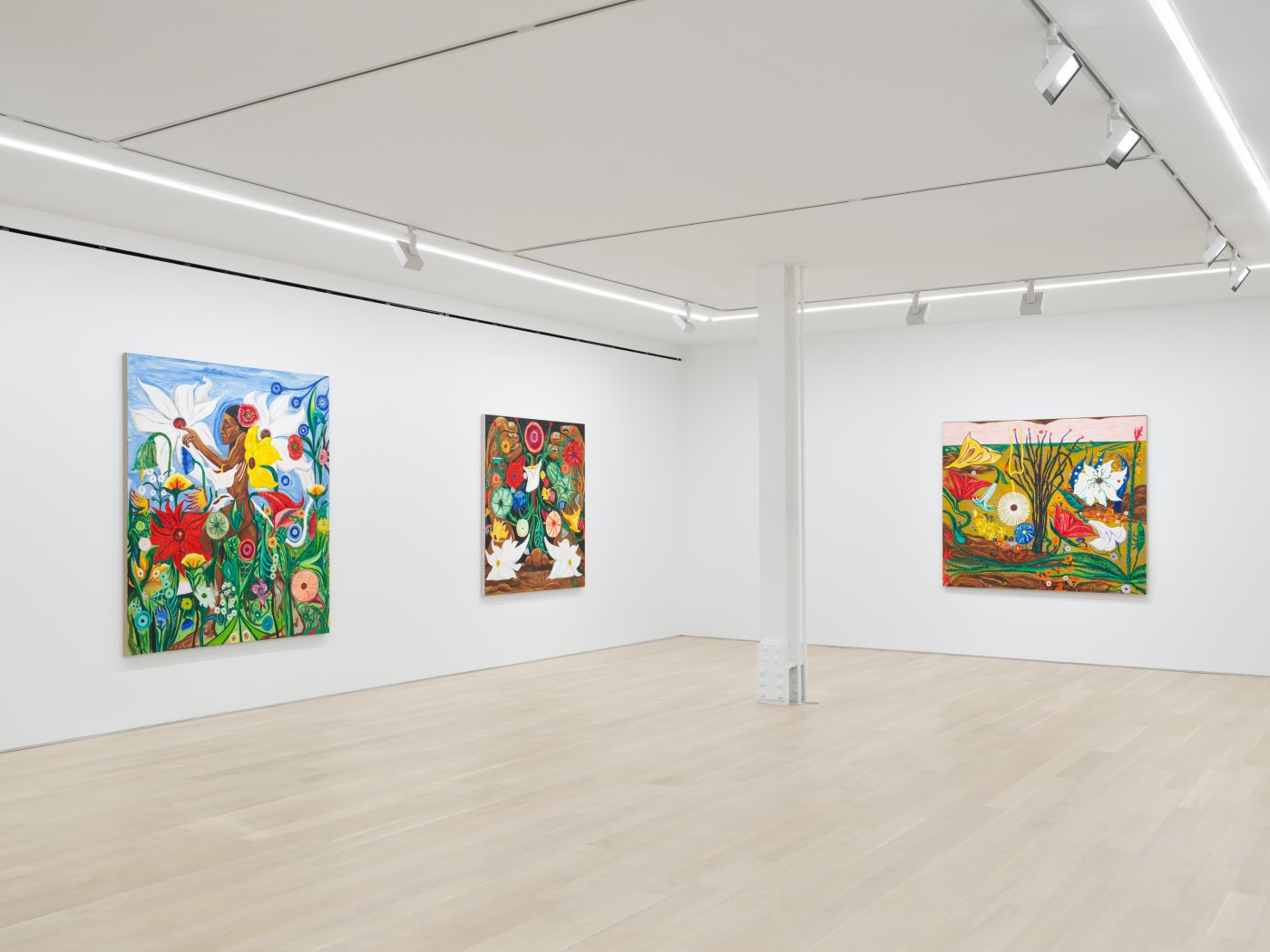 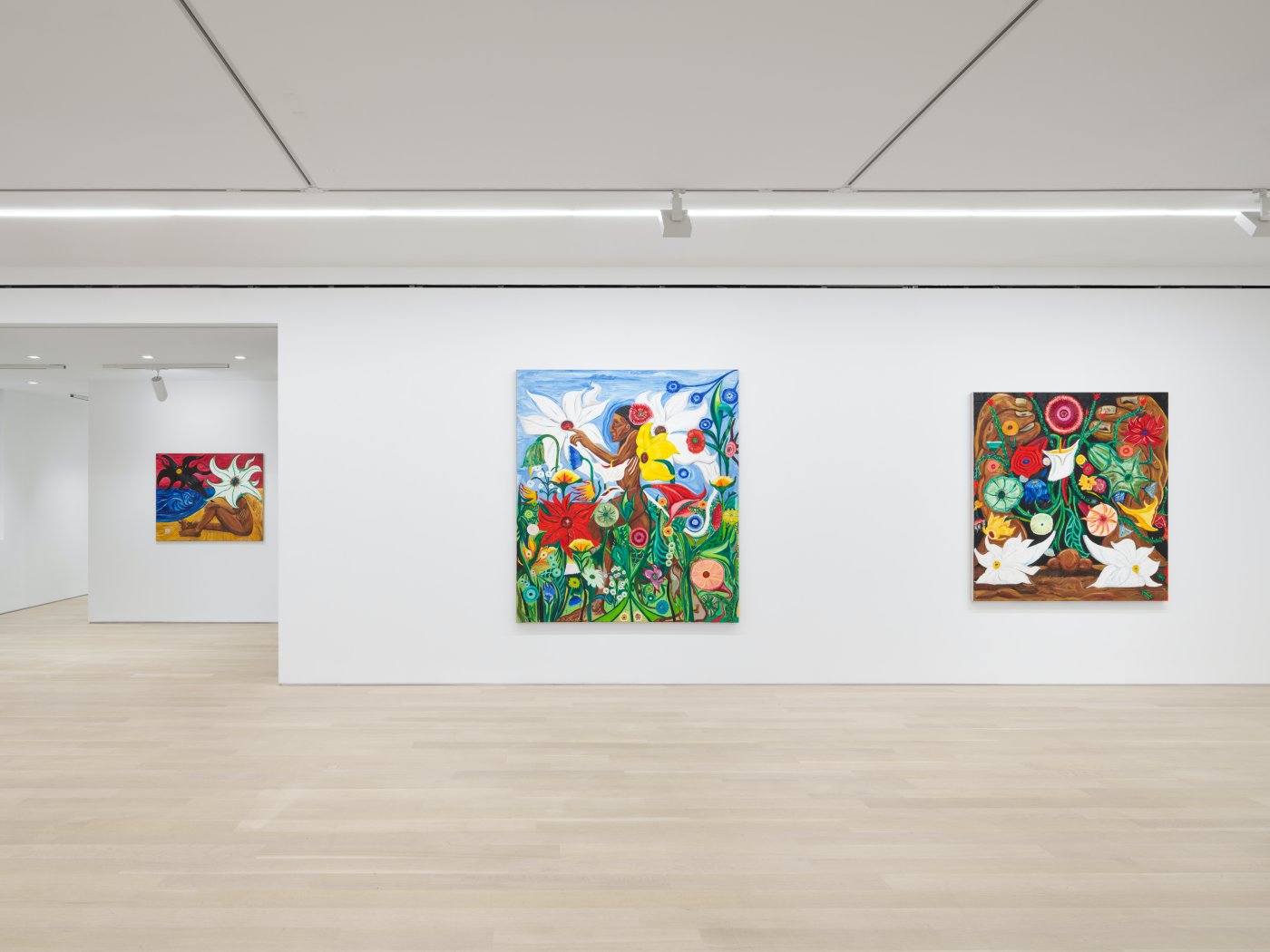 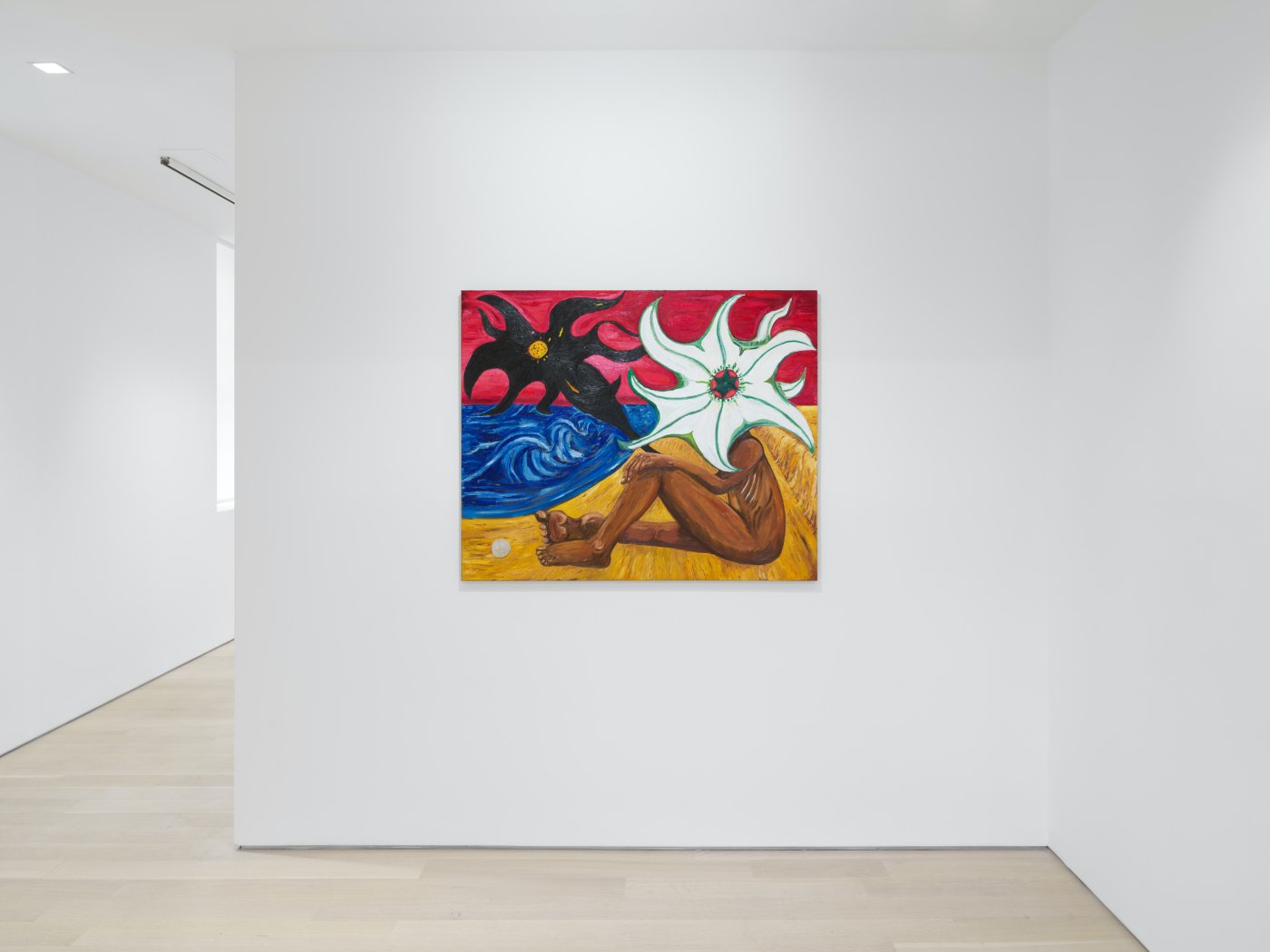 An Ocotillo is a shrub ubiquitous in the southern and southwestern deserts of North America. Clusters of long spiny green pole-like branches reach towards the sun with open arms; solely bound by a willingness to grow tall and occupy the airspace high above its roots. Similarly, these trees grow and permeate the land and topsoil across transnational borders blurring the ephemeral boundaries of man-made demarcations. Crimson-scarlet flowers bloom on the tips of the ocotillo’s spindly limbs alluding to ignited sparks on lean torches. In fact, the word ‘Ocotillo’ derives from the Spanish diminutive of the Nahuatl word, ‘Ocotl’, meaning torch.

Ocotillo Song, a solo exhibition of new paintings by Daniel Gibson appends the vocabulary of landscape painting with depictions of familial histories, art historical elegies, and matriarchal reverence. Notwithstanding, the paintings do contain horizon lines that meet with: deserts, valleys, bodies of water, farmland, flowers, butterflies, and sometimes people. Ocotillo Song obliterates the bucolic inclinations of ‘the western sublime’ with bright colors and cartoonish exaggerations resulting in a synthesis of imagery, like a language, that can be read as allegories.

A portrait of Gibson’s mother in Strawberry Fields reimagines a fraught moment, a biographical story from her days picking strawberries, with her family, as a child in Salinas, California. A defiant gestural middle finger in extreme perspective protrudes upwards from her body – seemingly motion-captured – as she carries the weight of one giant strawberry across her back. The labor does not skip a beat with her wide stride anchored by larger-than-life feet reminiscent of the strut from R. Crumb’s, Keep On Truckin’. Rows of strawberry crops blanket the land thus converging our sight towards the background where a transfixed ominous figure stands guard seated atop a horse. Unison in tonality, the sun, and the sky are a hazardous pink, glowing sharply against a skyline bifurcated by two piercingly blue mountains. Strawberry Fields, is a portrait within a site of memory; a landscape that integrates ‘the everyday life’ and the sociopolitical affect of an industry that serves global and national hunger pangs.

Flowers In Strawberry Vase tightly fits a squatting figure with its legs bent at the knees and feet flat to the left and right of its head with a face that has cartoonishly dizzy eyes and a mustached nose laying flat and squashed atop a floral ground. This figure holds aloft its head a large strawberry vessel overflowing with flowers and it appears to be the reason for its squatted smooshed position. An archway and background of brilliant, colorful, variegated flowers engulf the contorted figure wearing blue jeans and tennis shoes as a set of ruffly one-button barrel cuffs peek out below the wrists of its two large brown hands attempting to hold the strawberry vessel steady. Flowers In Strawberry Vase explicates on the continuance of nature and its abundance as it can tangle and encumber an individual’s effort to find balance while juggling man-made constructs.

Marsden Hartley’s Summer Clouds and Flowers is the compositional and topical inspiration for Gibson’s Sinaloa Clouds And Flowers, 1949 where he recontextualizes and metaphorically refers to the real-life happening of his paternal grandmother in labor aboard a fishing boat; later giving birth to his father on the beach. A female figure, Gibson’s grandmother, in lithotomy position lays flat on her back across the full length of the boat, from stern to bow, with legs flexed at the hip as bulbous clouds breeze overhead while below wind-driven surface waves crest in the swirling ocean probably somewhere between the Sea of Cortés (also known as the Golfo de California) and the Pacific Ocean. Fishing poles extend off the boat resembling insect appendages akin to the iconic Louise Bourgeois spider sculptures. Gibson closely emulates Hartley’s Summer Clouds and Flowers yet his painterly acumen personalizes it by simply interchanging the visual arrangements like including the large pink vase filled with red and white flowers except rendered in greater detail with a fuller assortment of flowers. Gibson customizes Sinaloa Clouds And Flowers, 1949 by adhering an actual sand dollar he found in Mexico from the shores along the Pacific Ocean. Additionally, he sets the landscape apart from Hartley’s by adding from memory the sandstone cliffs topped with lush green grasses and plants.

Ocotillo Song chronicles and illuminates Daniel Gibson’s deep-rooted ability to synthesize into a coherent whole his lived experiences and examined roots, much like the way a song contains words set within musical parameters, he corrals these findings within the open frontera of landscape painting. This song with these colors and this imagery connects us to the moments that put us in direct contact with a transpersonal pulse. Gibson’s Ocotillo Song is shared with us and opens us to something larger; a life that happens between us, a life that flows through us, within us, and outside of us.