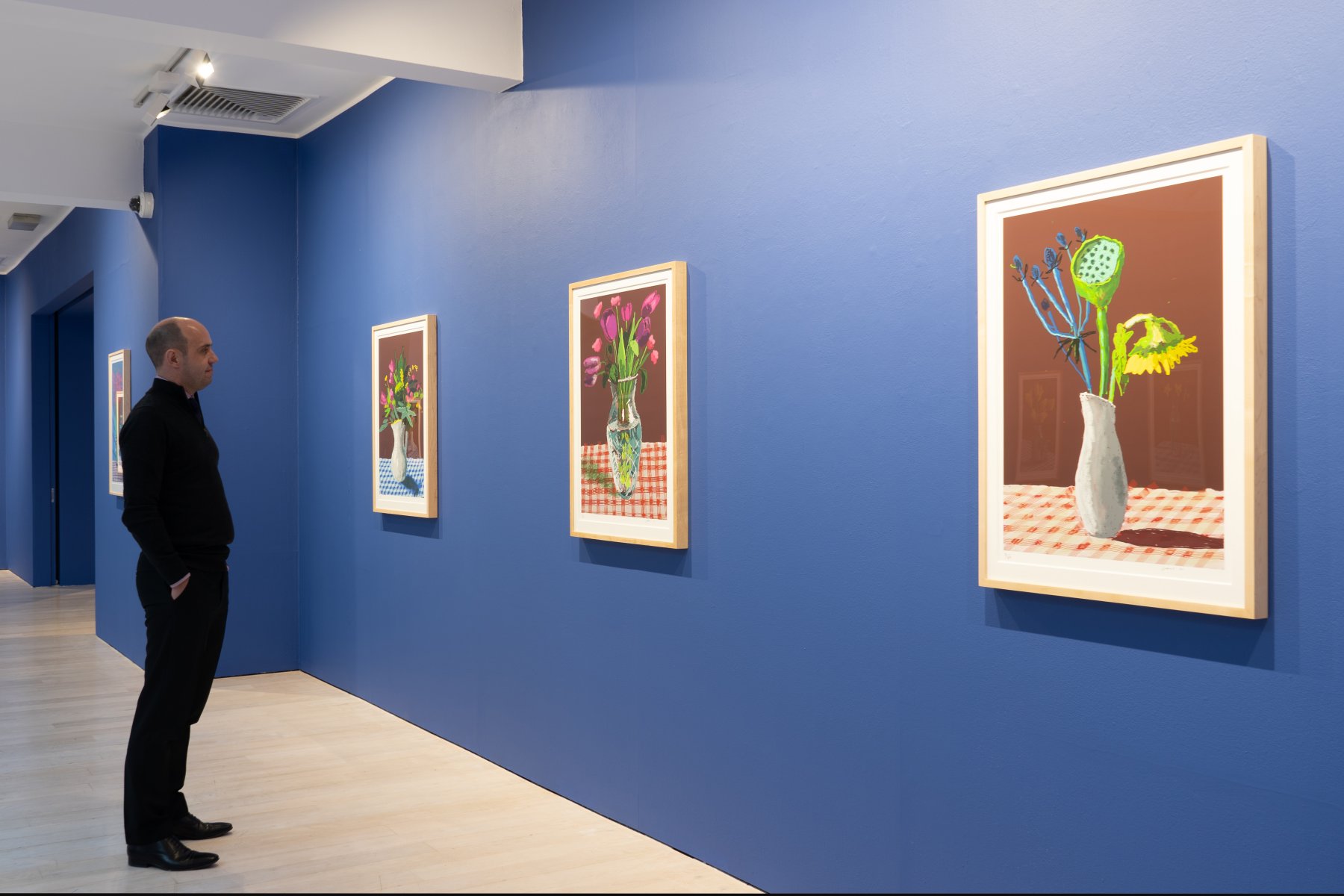 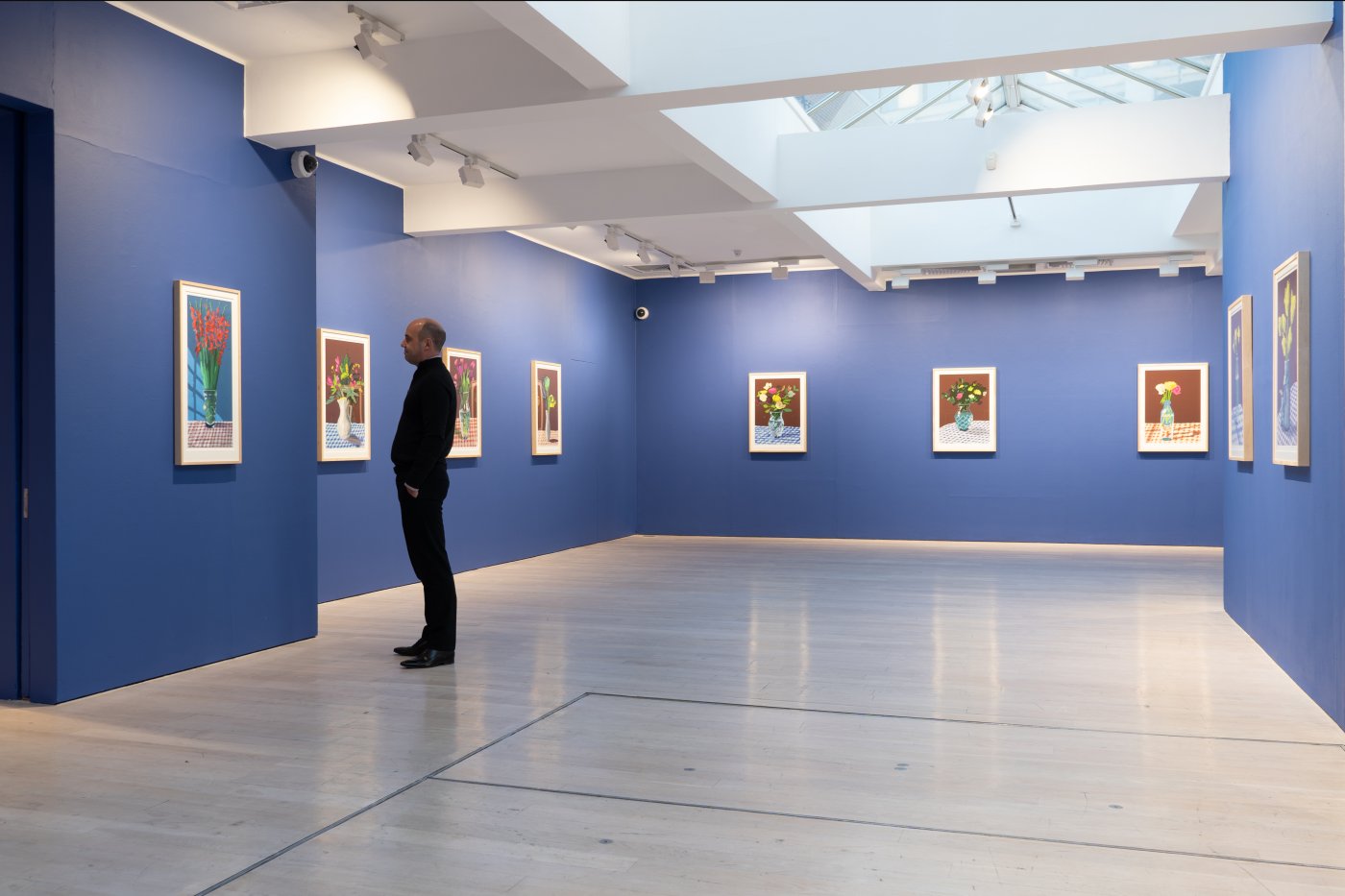 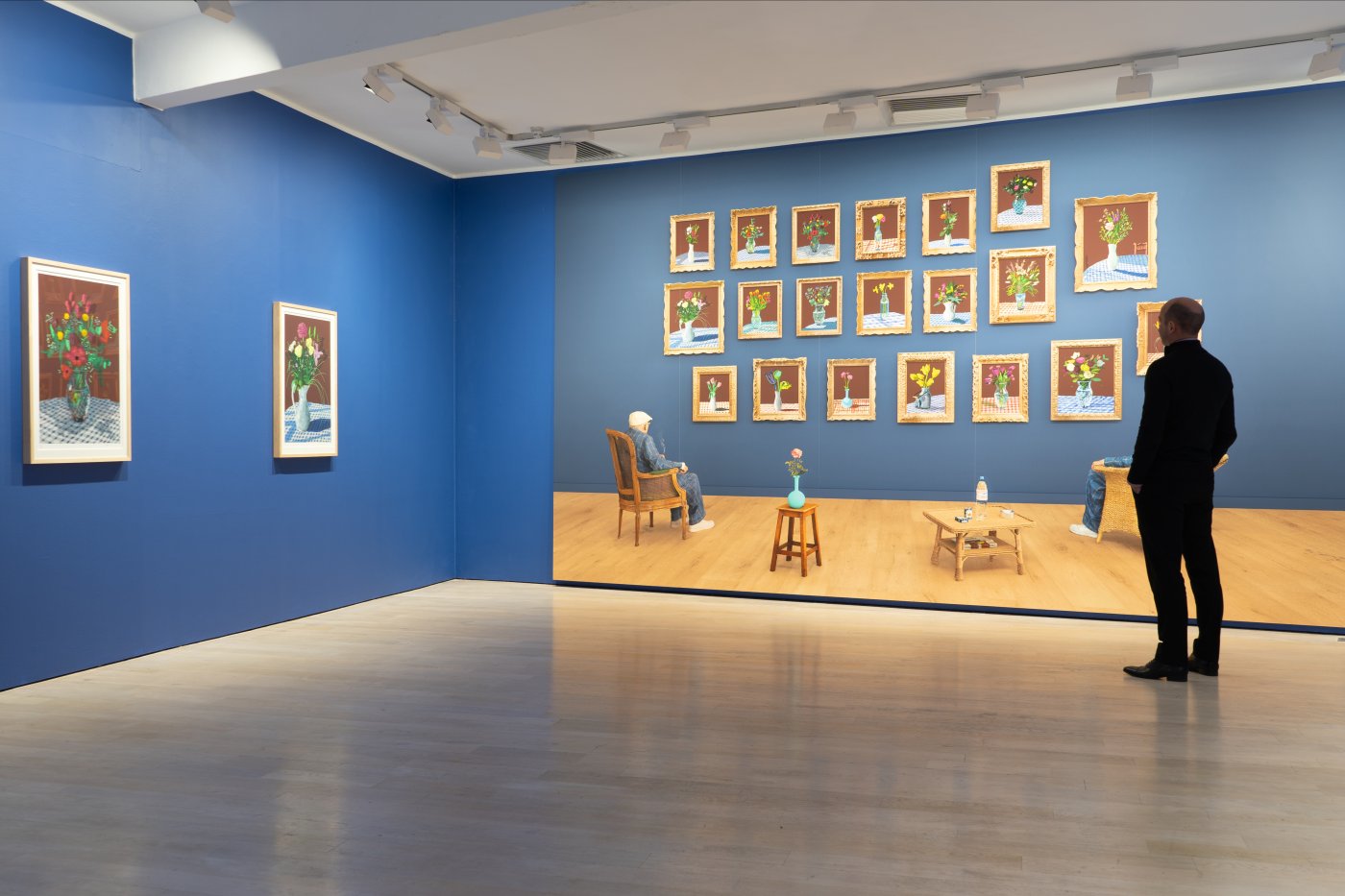 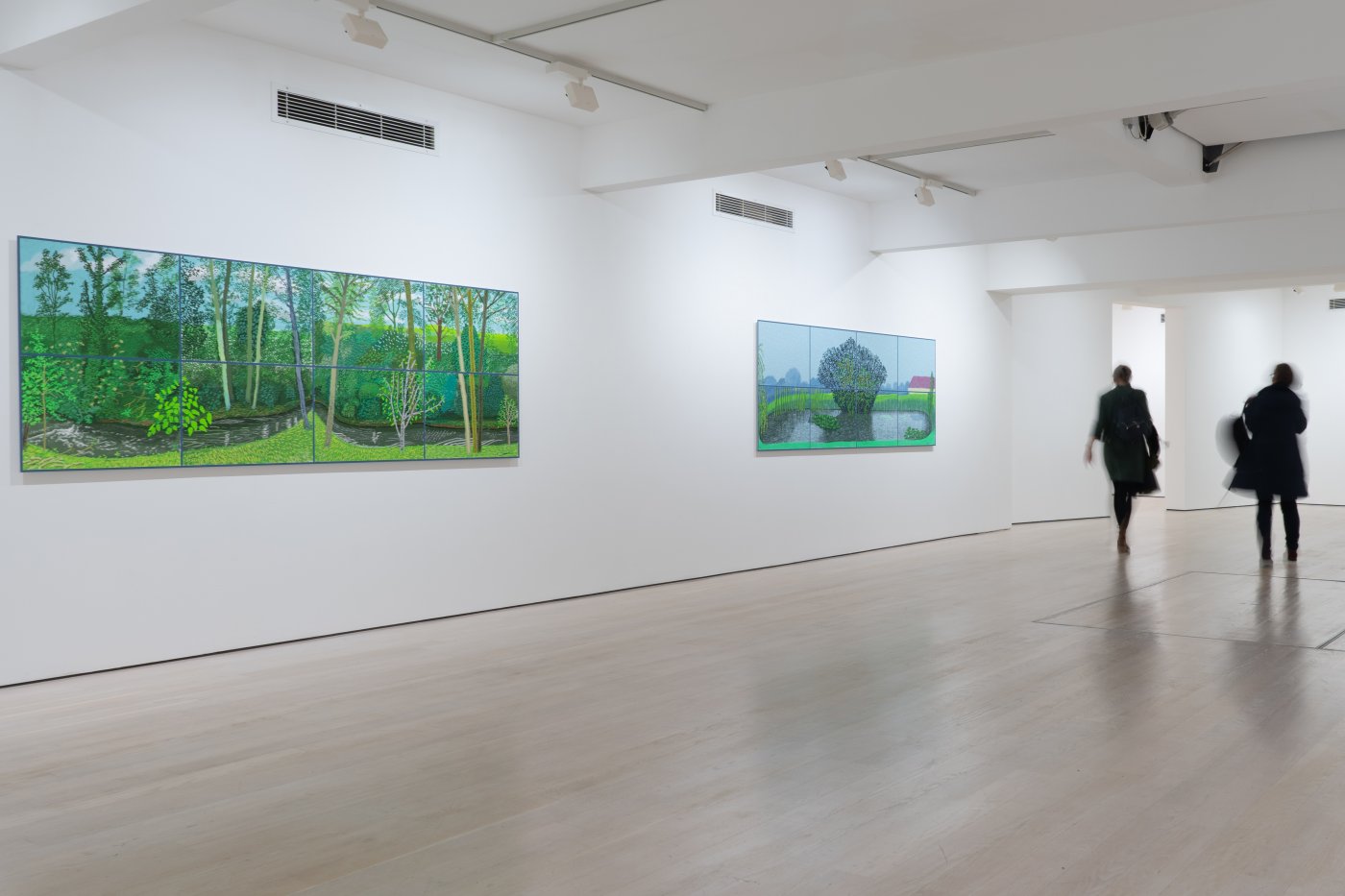 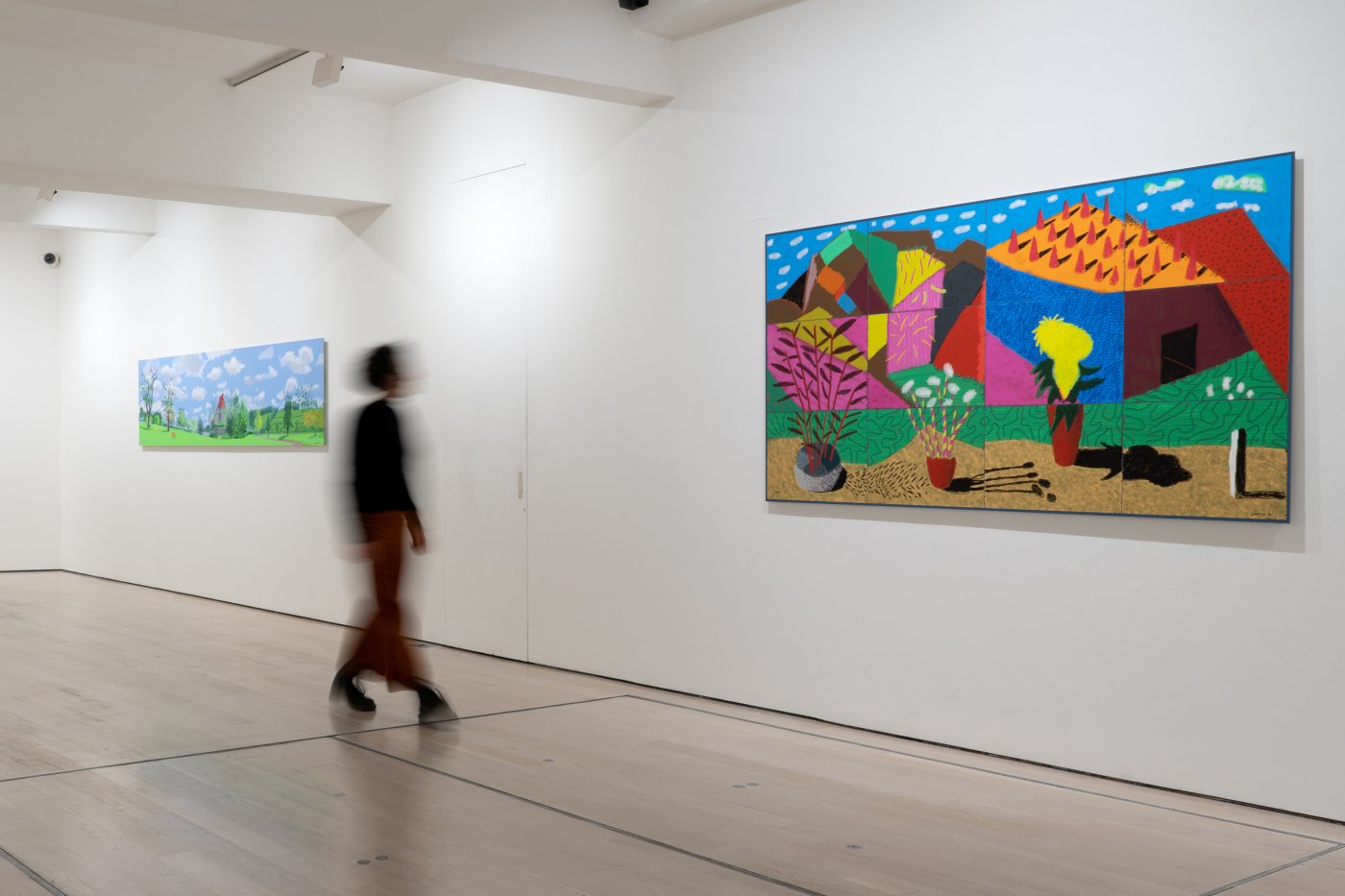 20 Flowers and Some Bigger Pictures presents works created by Hockney in 2021, expanding on a series of iPad paintings in 2020 while quarantining at his studio and residence in Normandy, France. Inspired by his daily observations, Hockney devoted himself to the iPad, a medium of unique immediacy that allowed him to be prolific in his depictions of his home, the changing seasons, and surrounding countryside.

Of his iPad paintings, each gallery will present two distinct series of editioned and signed inkjet prints: five landscapes, twenty floral still lifes, and a composite piece of three iPad paintings, depicting a Gladioli. These two series reveal the presence of Hockney’s hand as well as his deliberate technique for drafting larger-than-life compositions on the iPad. While Hockney’s flowers capture the fleeting stillness of his subjects, his immersive landscapes establish the vastness of his rural surroundings. Whether bound to a single moment in time or created from multiple planes of vision, Hockney’s distinctive sense of time and space draws from art historical examples ranging from the Bayeux Tapestry and seventeenth-century Chinese scrolls to the still lifes of Henri Matisse.

A cornerstone of the series, Hockney’s landscapes call upon his observations of the changing of seasons. In each of his gridded picture planes, Hockney reimagines the Normandy countryside with bright colors, abstracted forms, and impossible angles of otherwise traditional outdoor scenes. Placing his focus on themes of renewal and rebirth, the resulting body of work reflects the pastoral nostalgia and beauty of the natural world.

First reproduced by the German newspaper, Die Welt, and later debuted at Musée Matisse in Nice, Hockney’s series of twenty flower iPad paintings captures various arrangements of blooms set against a backdrop of gingham tablecloths and burgundy walls. “I was just sitting at the table in our house, and I caught sight of some flowers in a vase on the table,” Hockney explains. “A few days later I started another from the same position with the same ceramic vase. This took longer to do. I then realized if I put the flowers in a glass vase the sun would catch the water, and painting glass would be a more interesting thing to do. So then I was off.” Though attributes vary in each work, such as the species of flower—including one gladiola plant—and the color of the tablecloth, consistent elements across this series allow viewers to admire Hockney’s technique and dedication to his subject. Capturing a spectrum of floral compositions with contrasting tones and textures, Hockney displays his propensity for balancing the central artistic elements of line, color, and perspective.

At the center of the exhibition, Hockney debuts his latest large-scale photographic drawing, 25th June 2022, Looking at the Flowers (Framed). Within the composition, Hockney is depicted twice – once on the right side of the scene, and once on the left – sitting in an armchair and looking upon his twenty flower still lifes displayed salon-style on a navy-blue wall. “This is photographic but is in no way an ordinary photograph,” Hockney describes. “I had been doing what I called photographic drawings, giving a much more 3D effect. This is because you have to look at these through time (unlike an ordinary photograph which you see all at once).” From a series of individual photographs, Hockney constructs a seamless panorama that defies the natural parameters of time and space. The photographic drawing pulls viewers into a self-referential world that is at once familiar and entirely new. “Most people thought the photograph was the ultimate depiction of reality, didn’t they? People thought, This is it, this is the end of it. Which it’s not. And I’m very certain it’s not, but not many people think the way I do.”(1)

To accompany the exhibition, all five galleries will release the book David Hockney: 20 Flowers and Some Bigger Pictures (English and French, 76 pages, 24 x 31 cm). The book will feature an essay by the artist and color illustrations of the works on view in the exhibition.