David Richard Gallery presents an exhibition of new artworks by Dee Shapiro, Redrawn and Redressed, in her third solo presentation with the gallery. The new artworks are comprised of original painting and ink renderings, collaging of found printed papers, textiles and sewing trims, appropriation of her own original artworks and human hair as well as appropriated published imagery. In the aggregate, these diverse media and methods create female figures, mostly nude, bathing or reclining, as her versions of classic female nudes presented over centuries of art history. 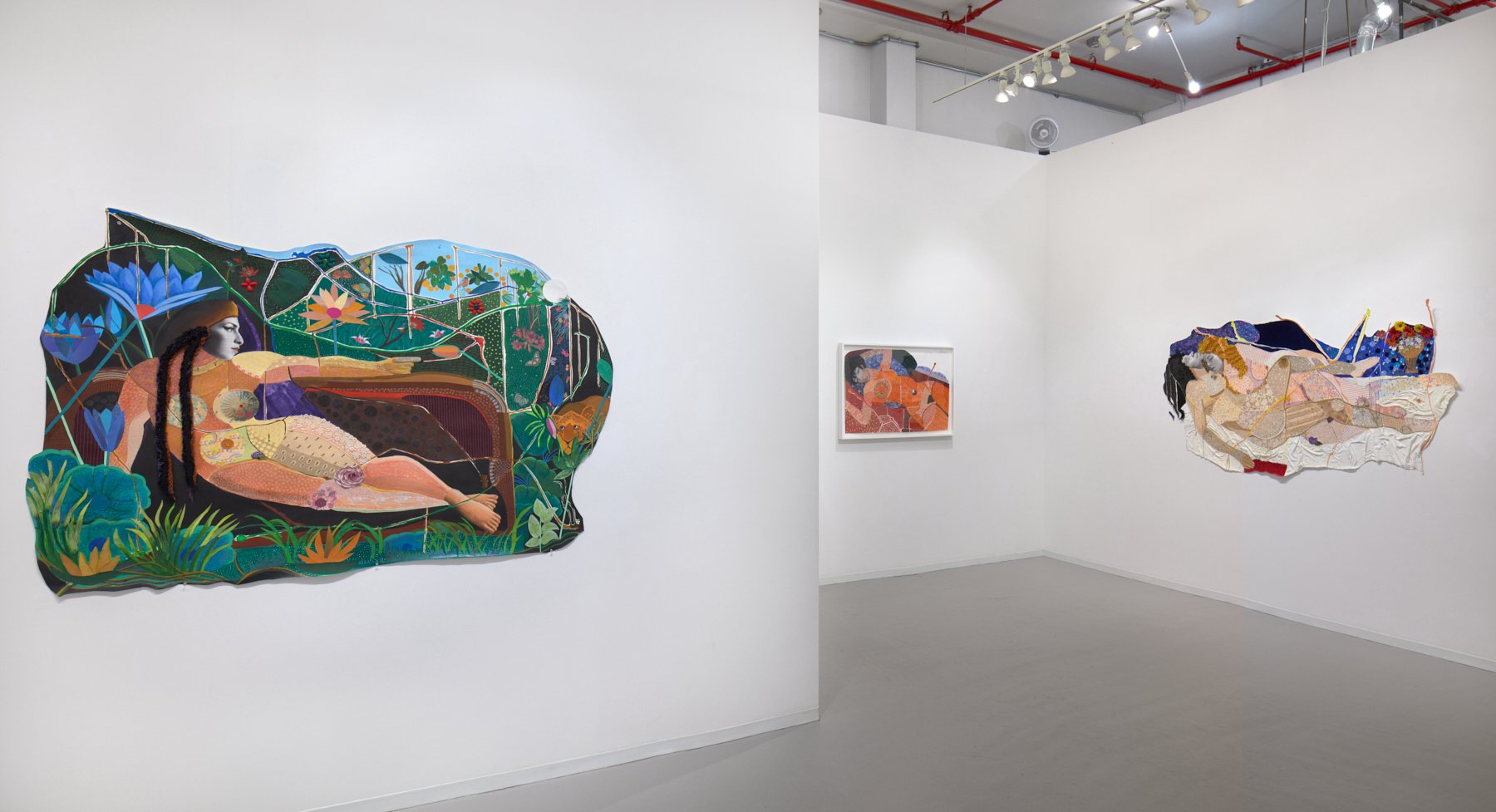 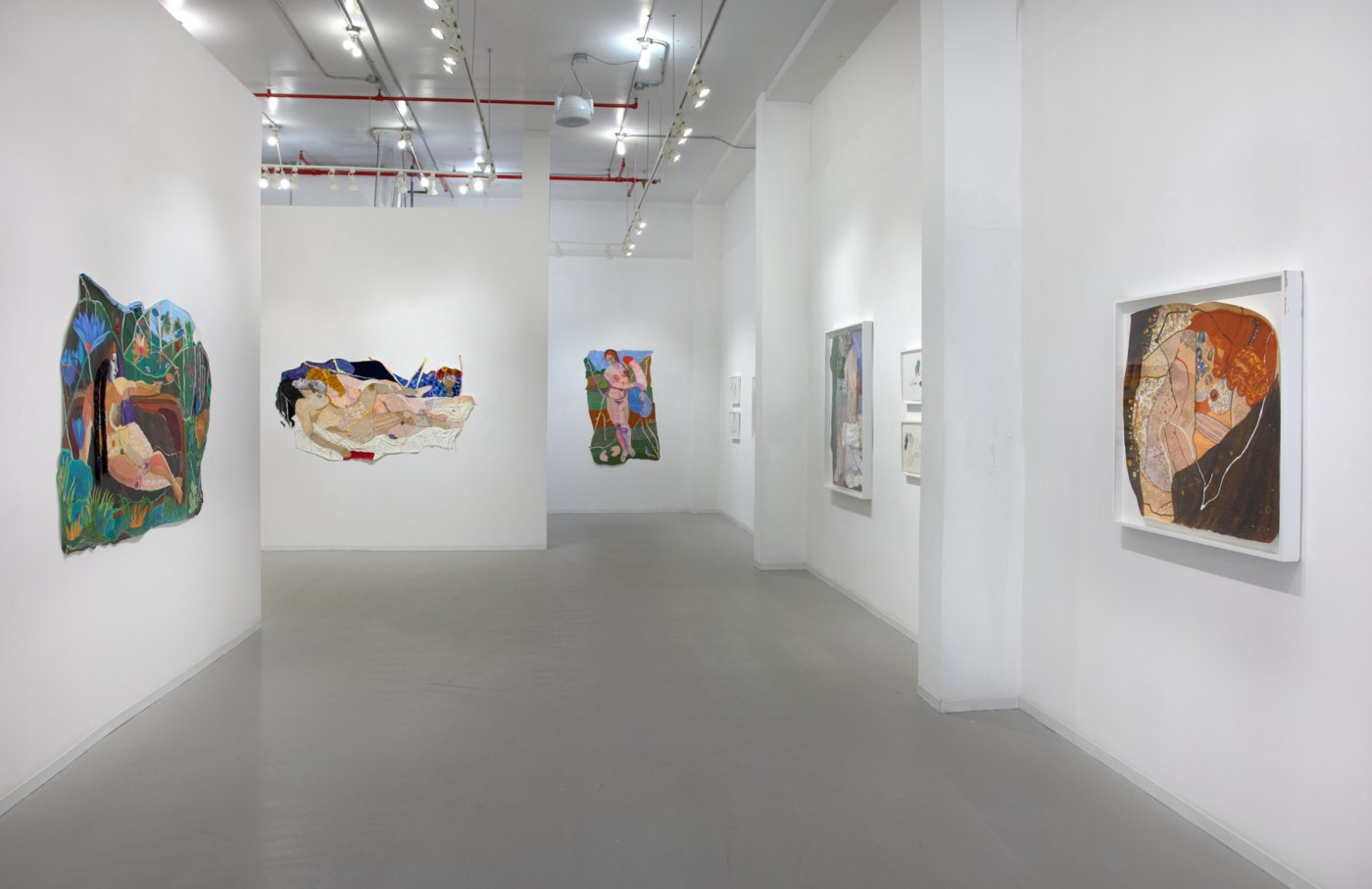 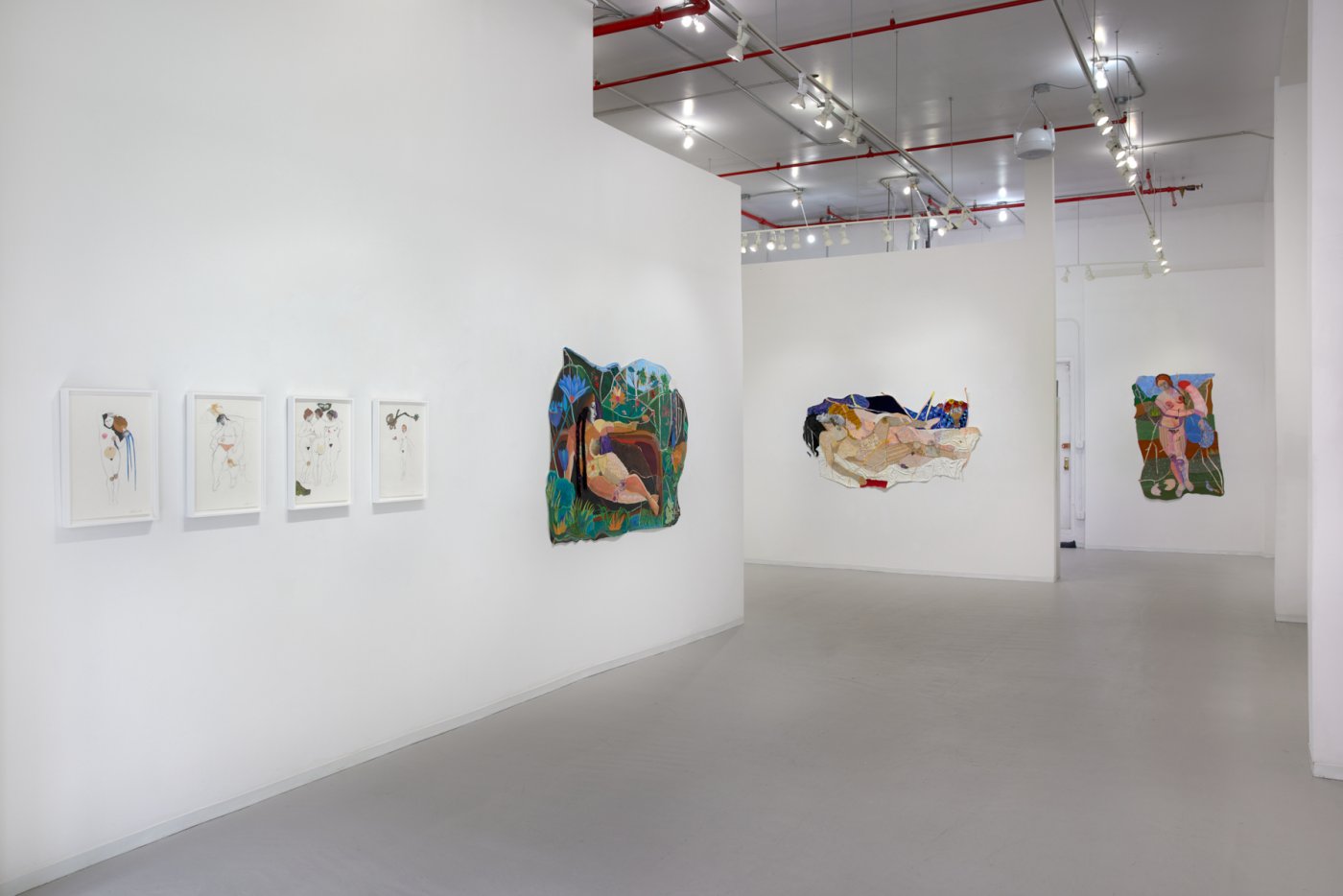 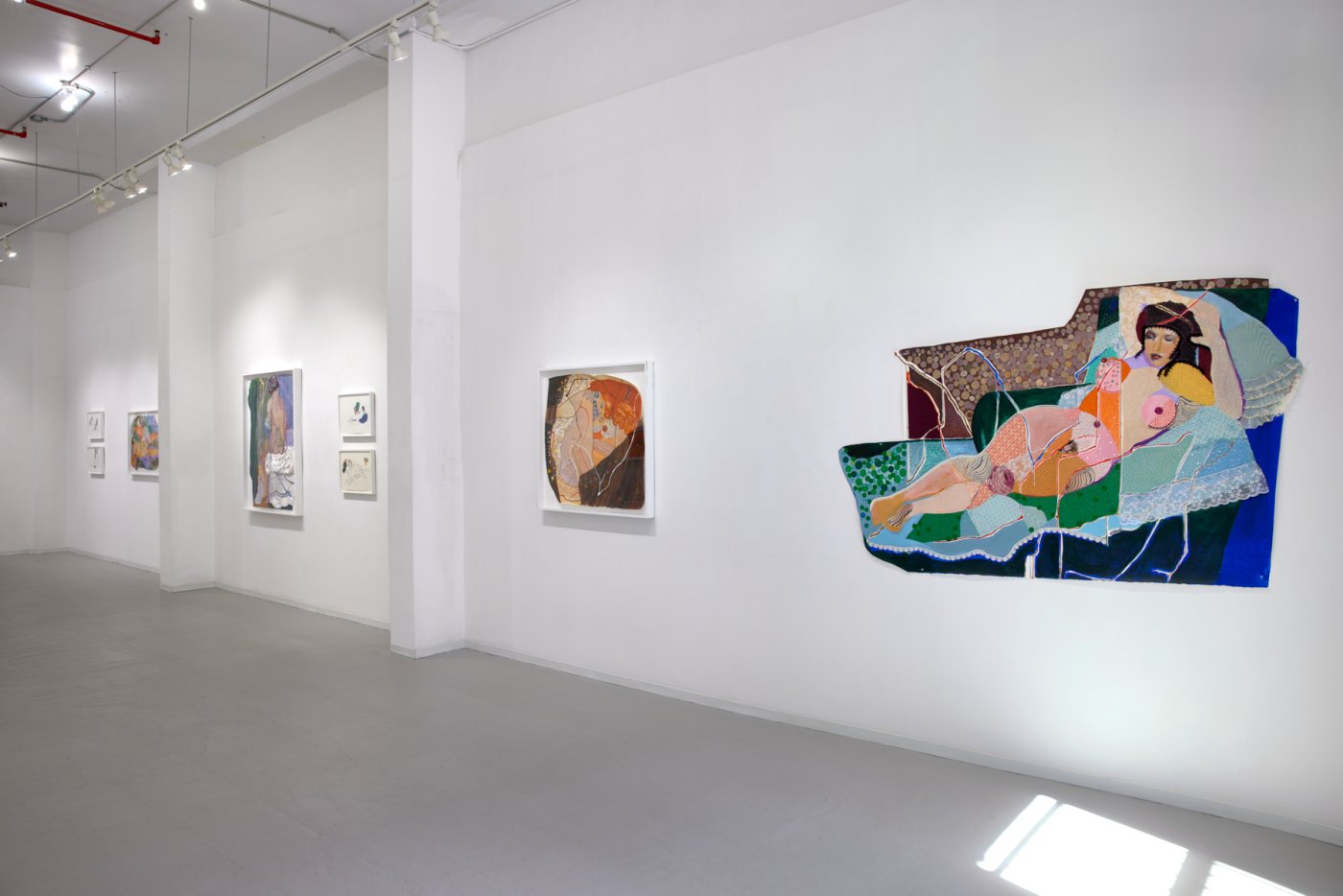 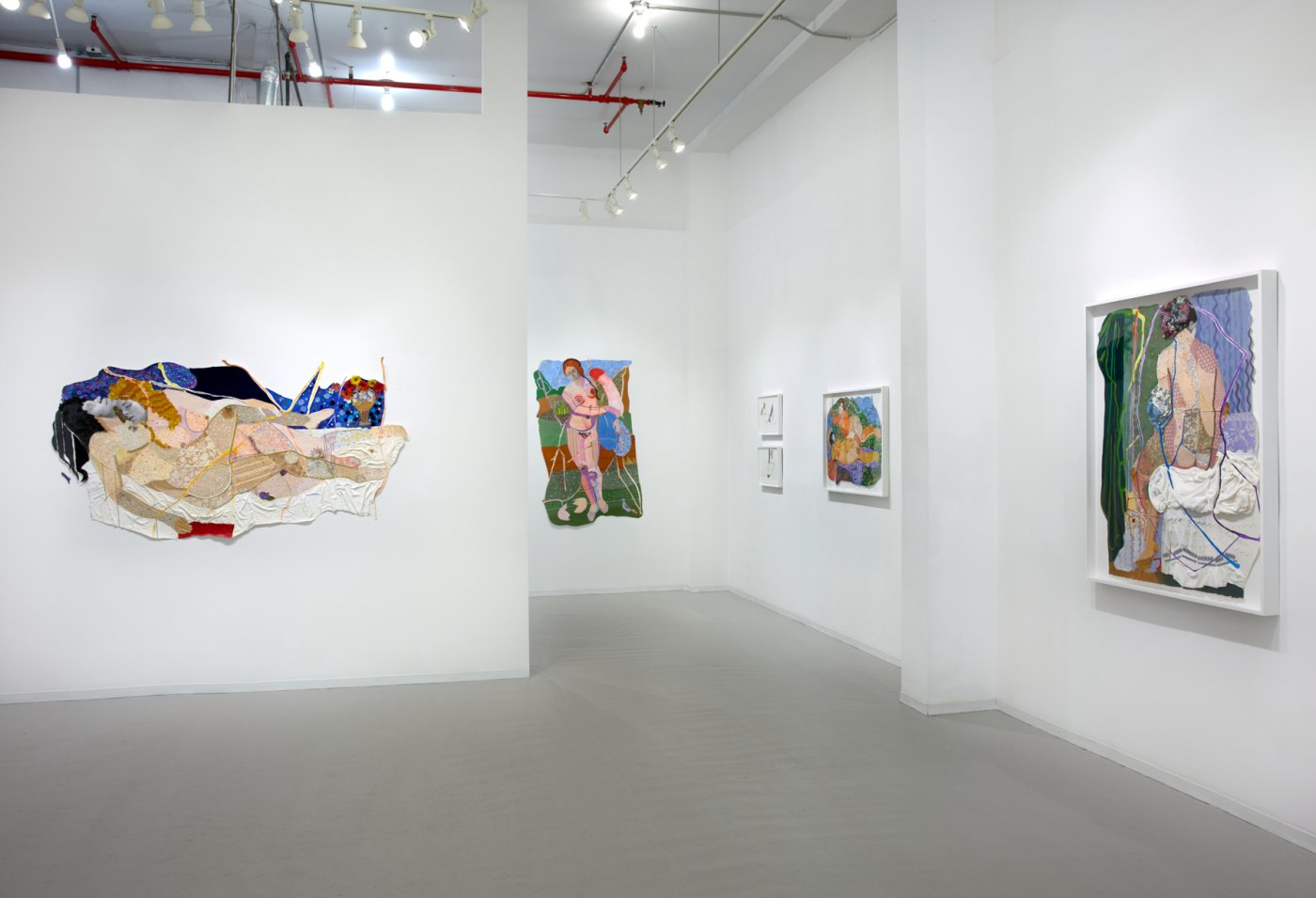 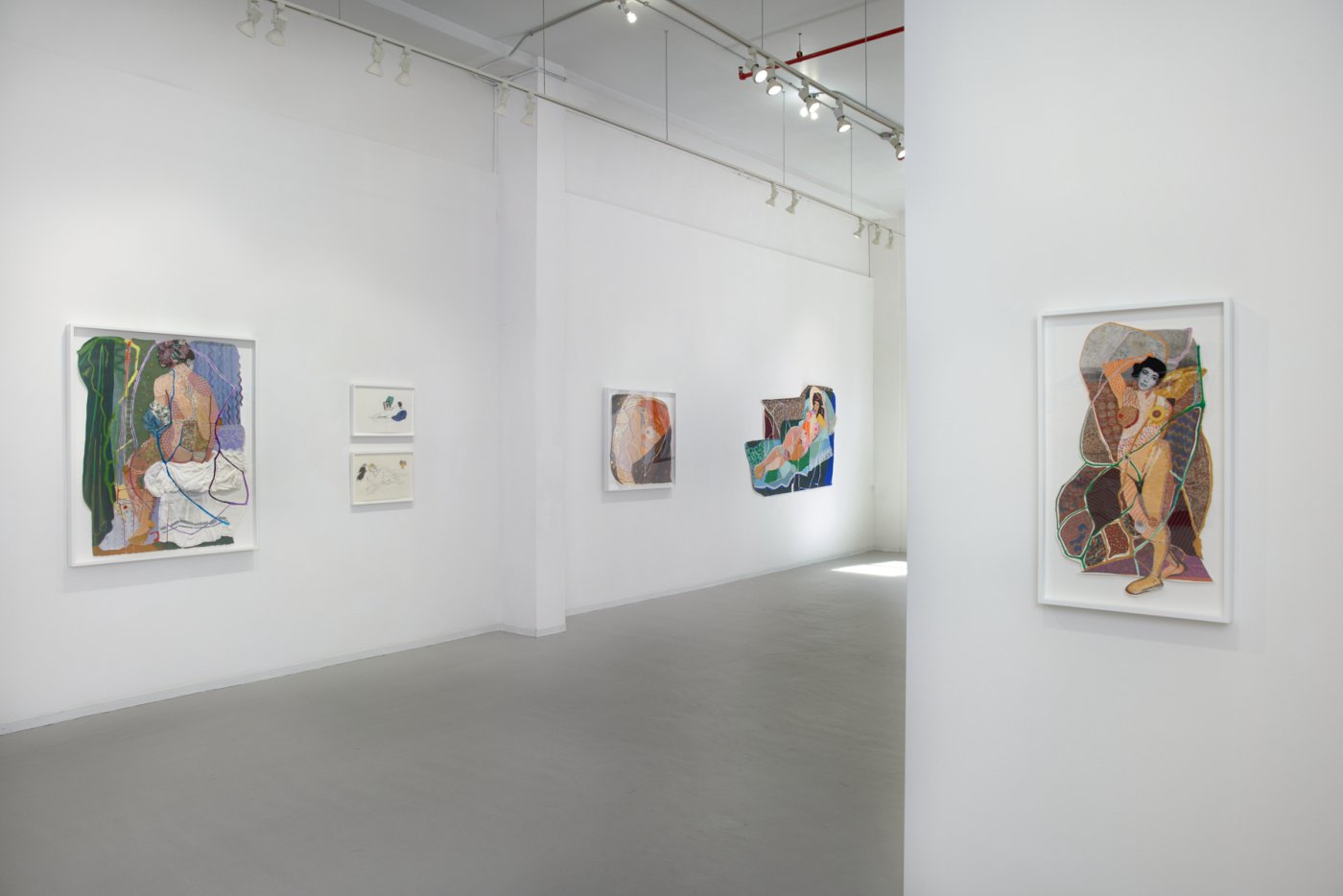 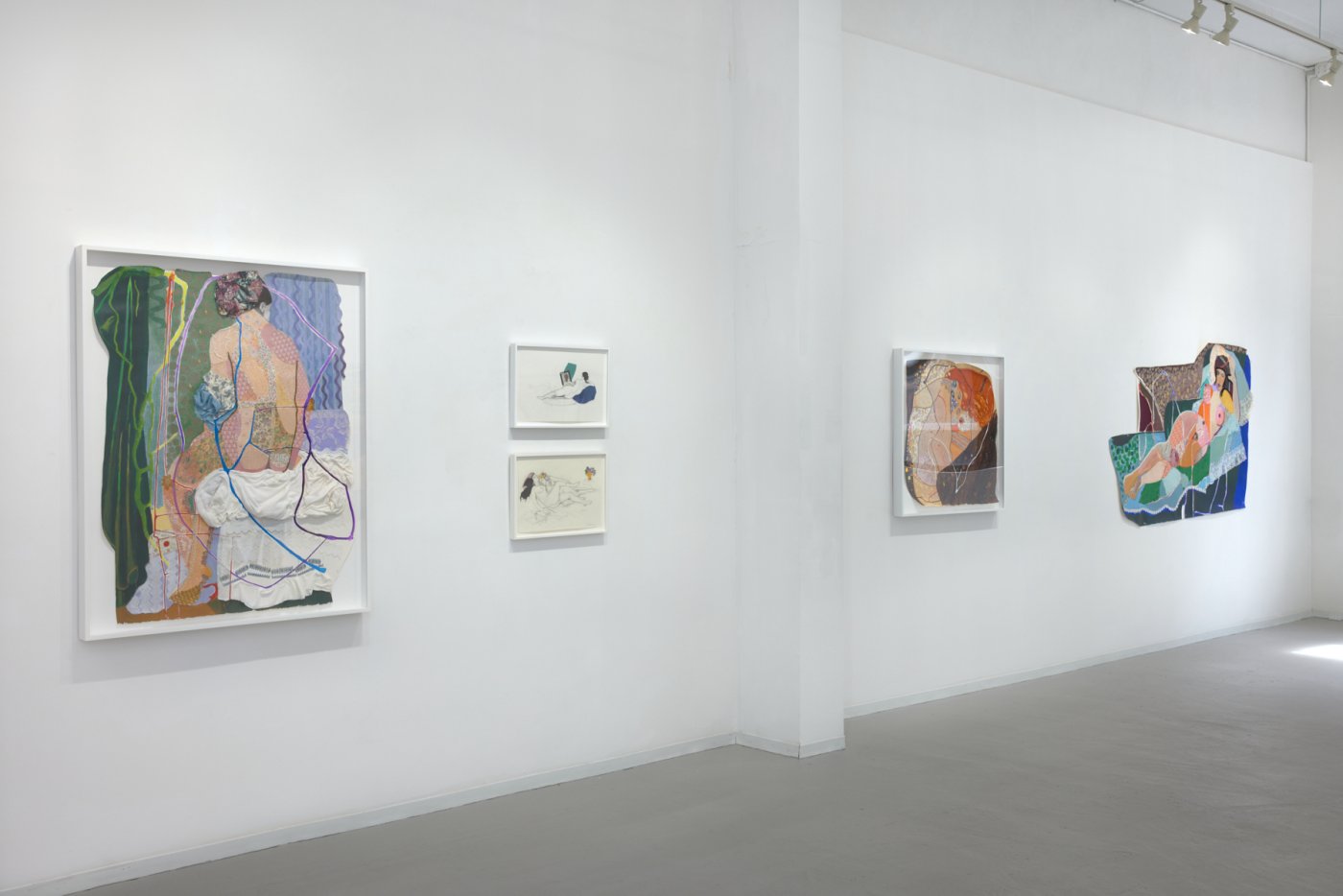 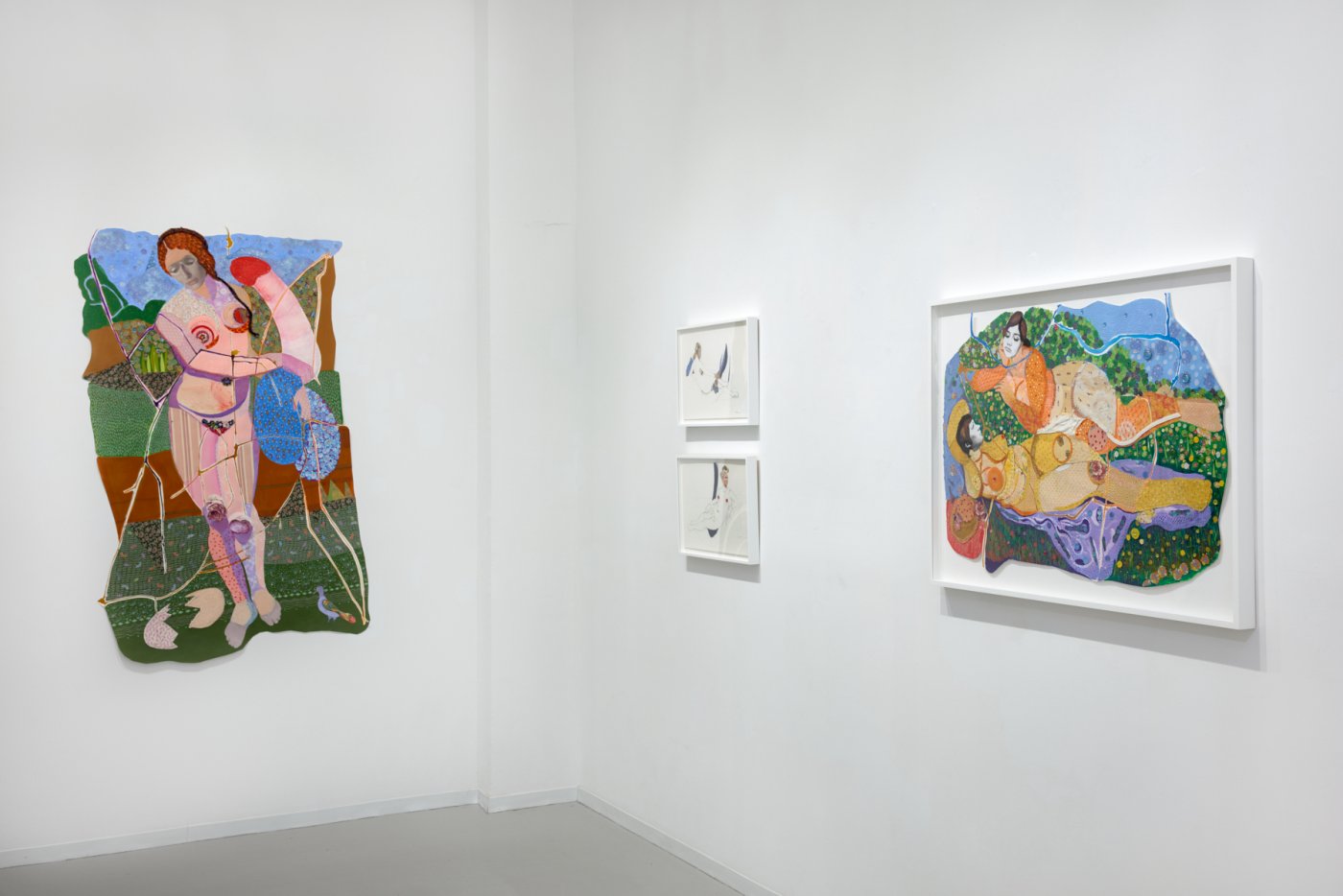 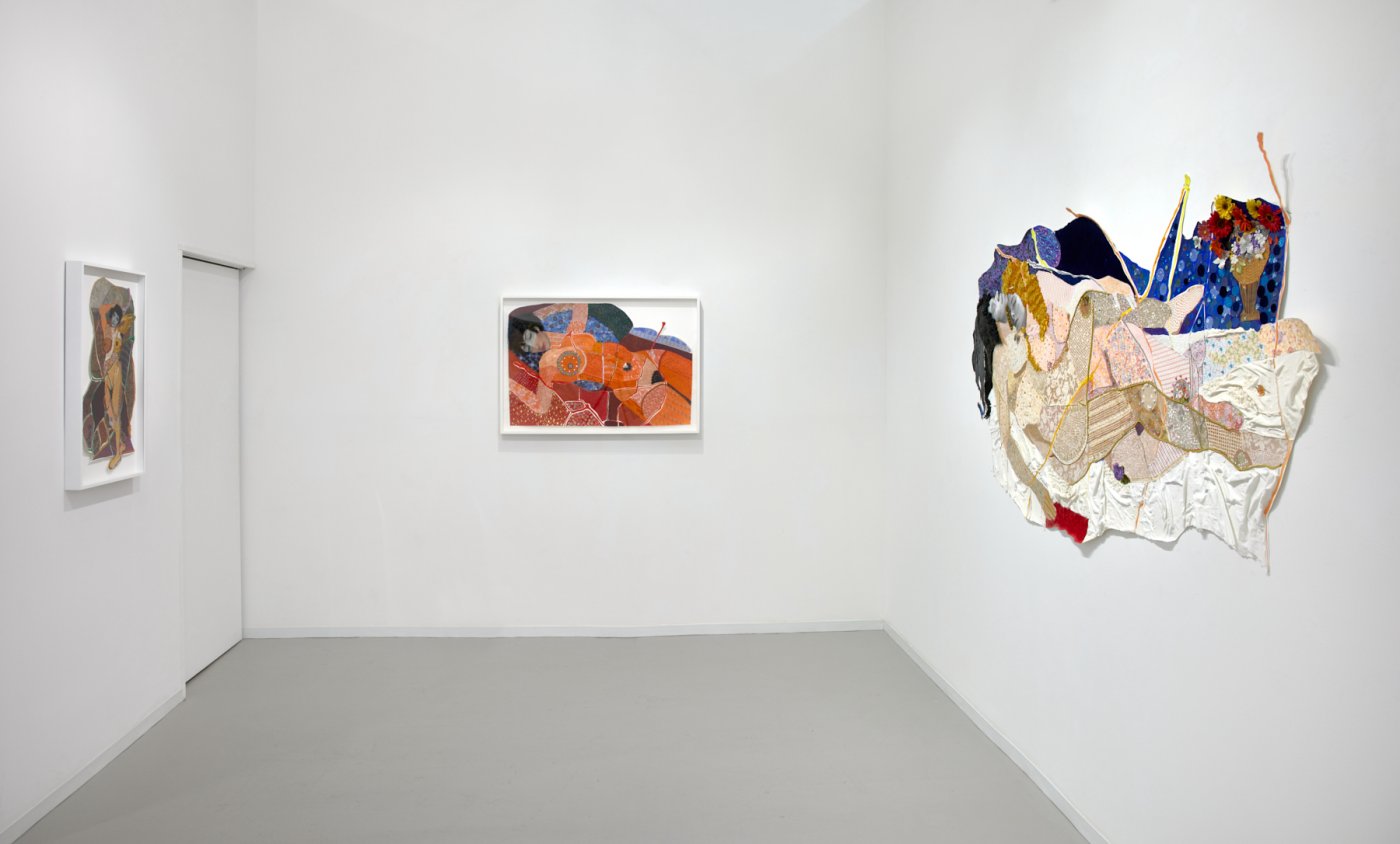 Shapiro’s use of geometric patterns and domestic materials brings a different perspective and interpretation to the nude female body. While they are still sexy and full of intrigue, there is a literalness of the female form—and body parts—that moves beyond a gaze and sexualization to a focus on: line, form, color, and the complexities of the constructions and process. Shapiro’s redux of the classical nudes brings a matter-of-fact presentation of the female body with a focus on unique materials and interpretations that bring an immediacy and contemporary perspective to an all too familiar image and historical male scrutiny of the female form. As the title suggests, “redrawing” and “redressing” not only re-presents the imagery in a new context but also attempts to rectify how the female body has historically been overly sexualized and coveted throughout art history.

The collages of Shapiro play with several concepts: the real shapes of women versus the idealized female form based on the male perspective; the unique and functional aspects of the female body for reproduction versus purely for male pleasure; deconstructing the conventional portrayal of the female figure as only sinuous and supple and redrawing the classic female nudes using the artist’s own drawn and painted patterns, sewing materials—often considered “women’s work”—and human (including pubic) hair. The resulting artworks by Shapiro are less sexualized or objectified portrayals of women’s bodies, instead of the historical commissioned portraits—by the Masters in the canon of art history—of women who were most likely the “prize” of the men paying the Masters to capture the women’s perceived and cherished fleshy beauty forever in pigment and oil.

The presentation includes: five unframed, large scale collages pinned to the wall; five framed, small to mid-sized collages; eight framed small pencil drawings with ink, paint, and a small amount of collaged and appropriated imagery giving the works an open, fresh, and spontaneous feel; as well as 3 large-scale framed works that were presented in Shapiro’s first solo exhibition with the gallery in 2019 to provide context for the breadth of the artist’s representing the classic female nudes from art history. The latter group of framed works will not be installed but included in the catalog and available for viewing and acquisition.

Interestingly, the first of the paintings and collages by Shapiro, Convoluted Torso, 2017, that begat this entire suite of artworks will also be included in the catalog and available for viewing and purchase. That particular work is abstracted, yet highly evocative of a female figure and became the inspiration for this entirely new and revelatory body of work worthy of feminist and art historical discourse. The significance of this suite of paintings and collages is that they are Shapiro’s first time ever creating figurative, representational artwork. Heretofore, the artist’s work had all been geometric and patterned, no use of figures, appropriated images or textiles.

The Artist’s Statement: As in a dream of alternative realities, absurd connections, or on a trip passing familiar landscapes in unfamiliar settings, new conscious and unconscious associations are brought to a two-dimensional surface in my work. In the recent pieces, geometry (seen even in the structure of organic forms) directs composition: arbitrary drops of color undermine control and create shapes that succumb to the overwork of drawings, rendering obsessive intricacies and paint applications to build the forms. Collaged materials add extraneous influences in a subtle blend.

In the beginning was pattern. First, the Fibonacci progression color coded on graph paper, a piece which landed in the Guggenheim Museum in NYC. Next, inclusion in the Pattern and Decoration (P & D) exhibition at PS1, followed by a series of work that included architectural elements “off the grid”. With all the work, always color and a nod to the Albers’ studies. A redirection to small horizontal paintings of the geometry in cities and landscapes ensued for a number of years.

Missing the early fascination and engagement with pattern led to more recent work exploring evocative biological and organic forms, the evolution of which is the more recent work as well as borrowing from sources that include other artist’s work in a collaborative effort. In this new body of work, I am unflinchingly forging ahead to newly wrought terrain.

Dee Shapiro’s artworks were included in the recent exhibition, With Pleasure: Pattern and Decoration in American Art 1972–1985, organized by Anna Katz, Curator, with Rebecca Lowery, Assistant Curator at The Museum of Contemporary Art, Los Angeles (October 27, 2019 through May 3, 2020) and the Hessel Museum of Art, Bard College, Annandale-on-Hudson (June 26 – November 28, 2021).