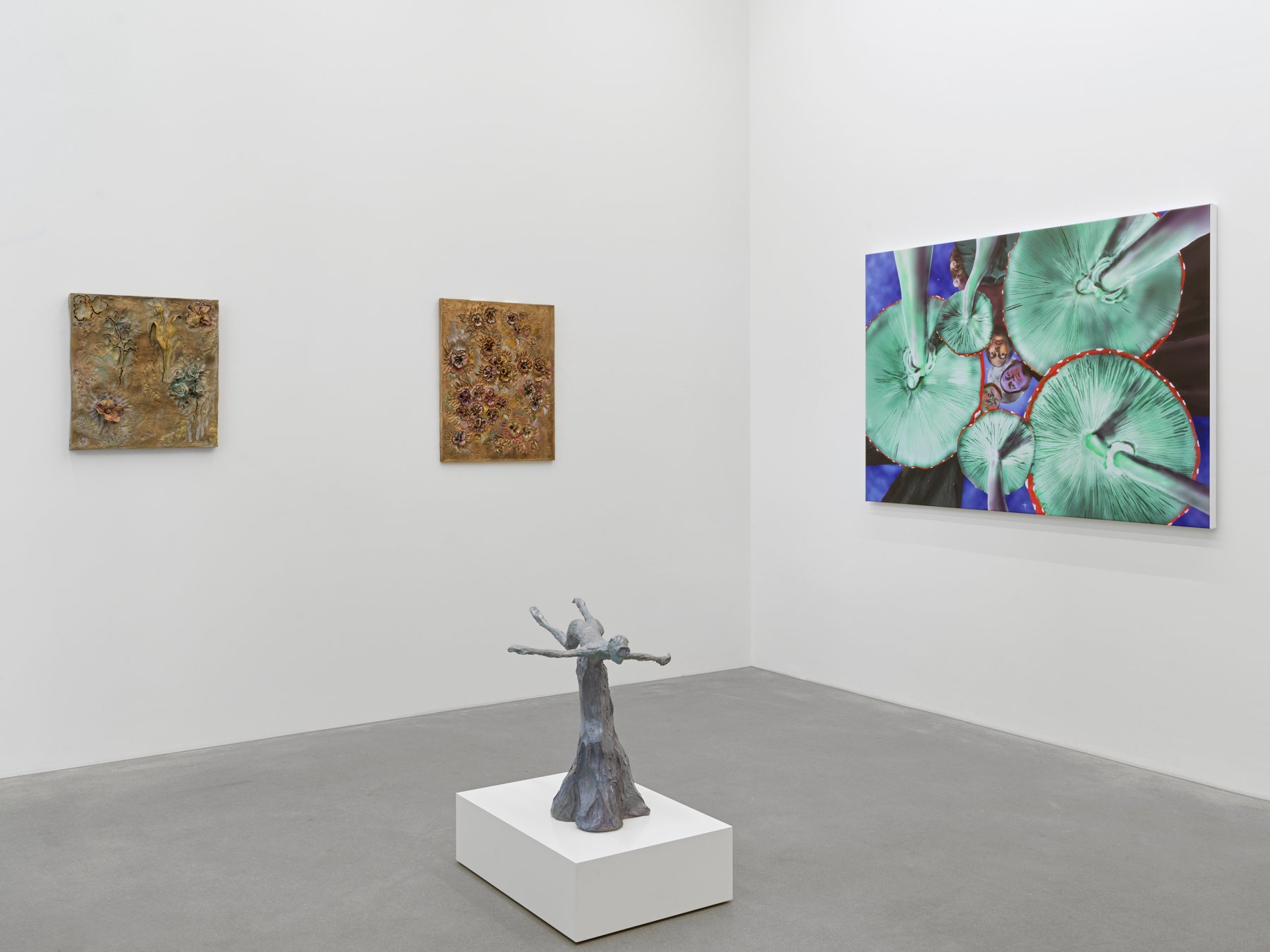 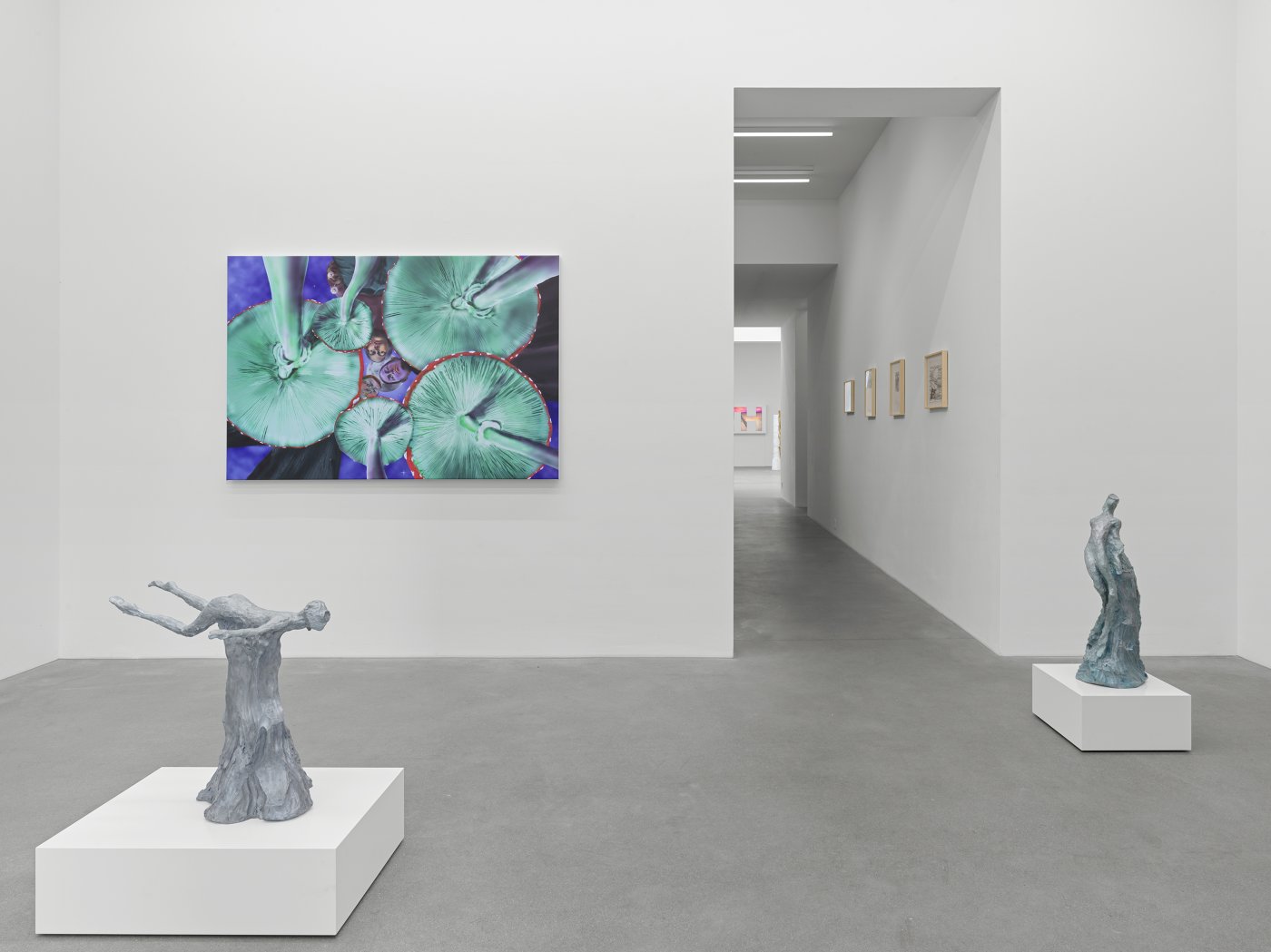 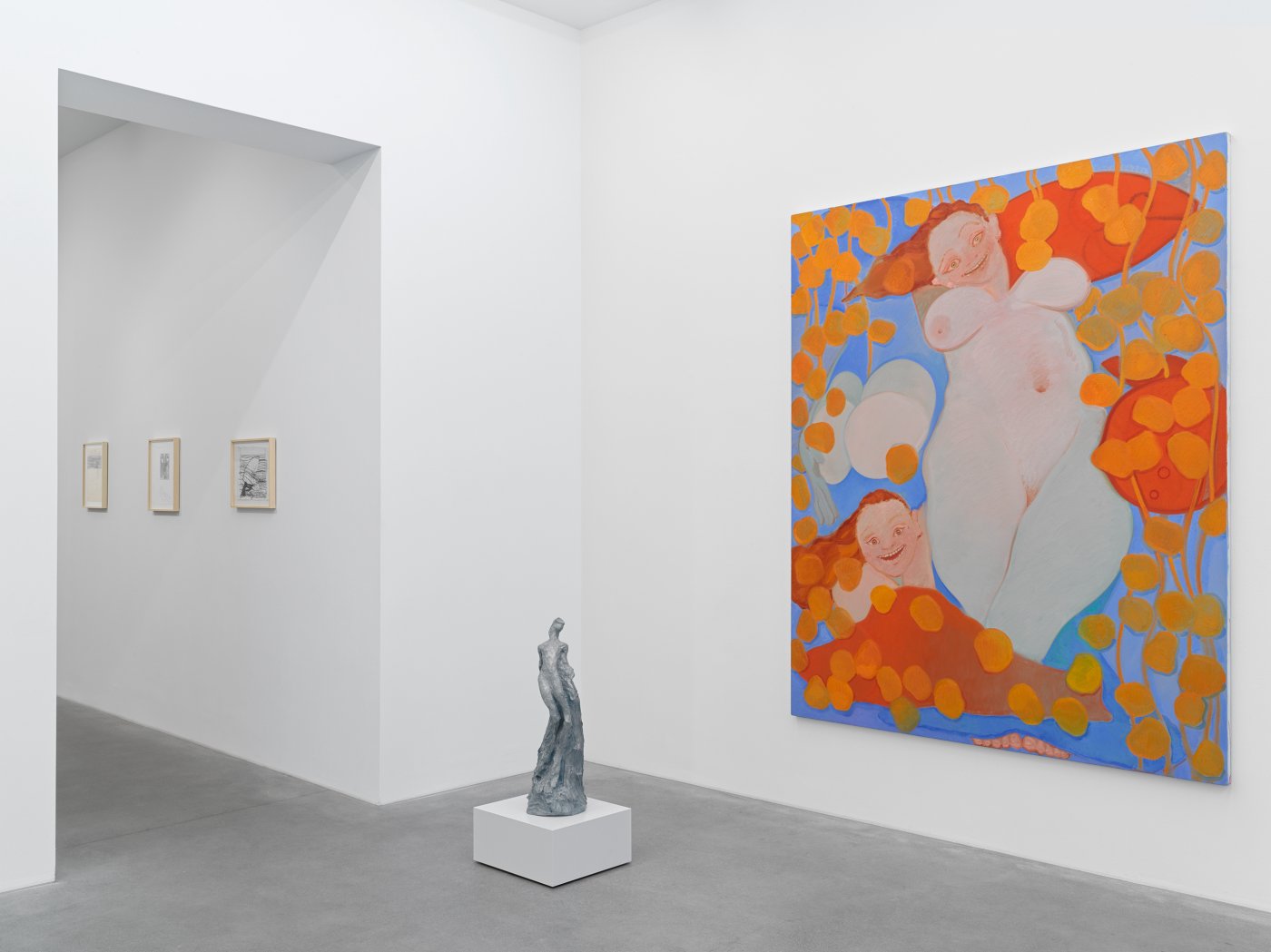 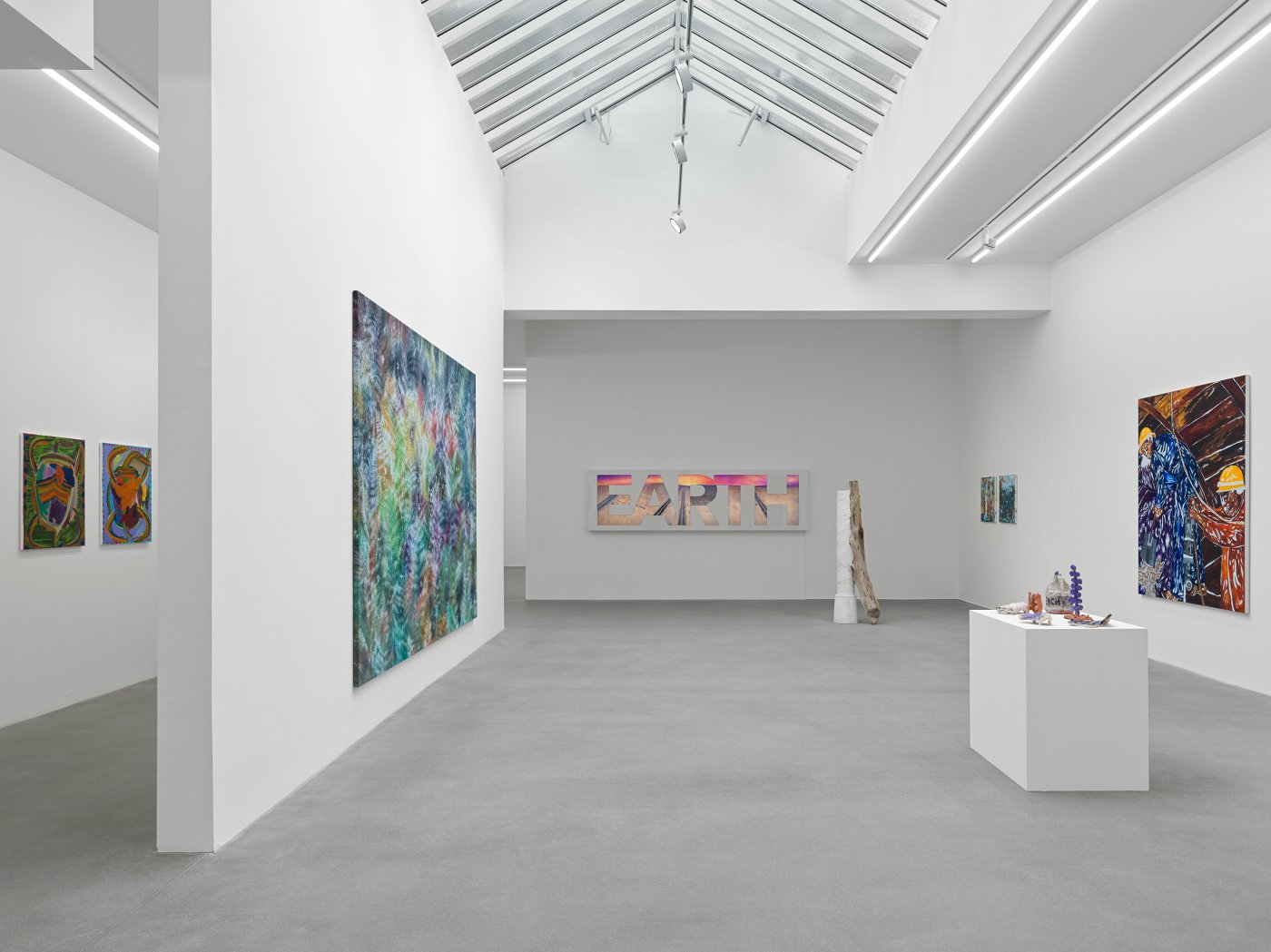 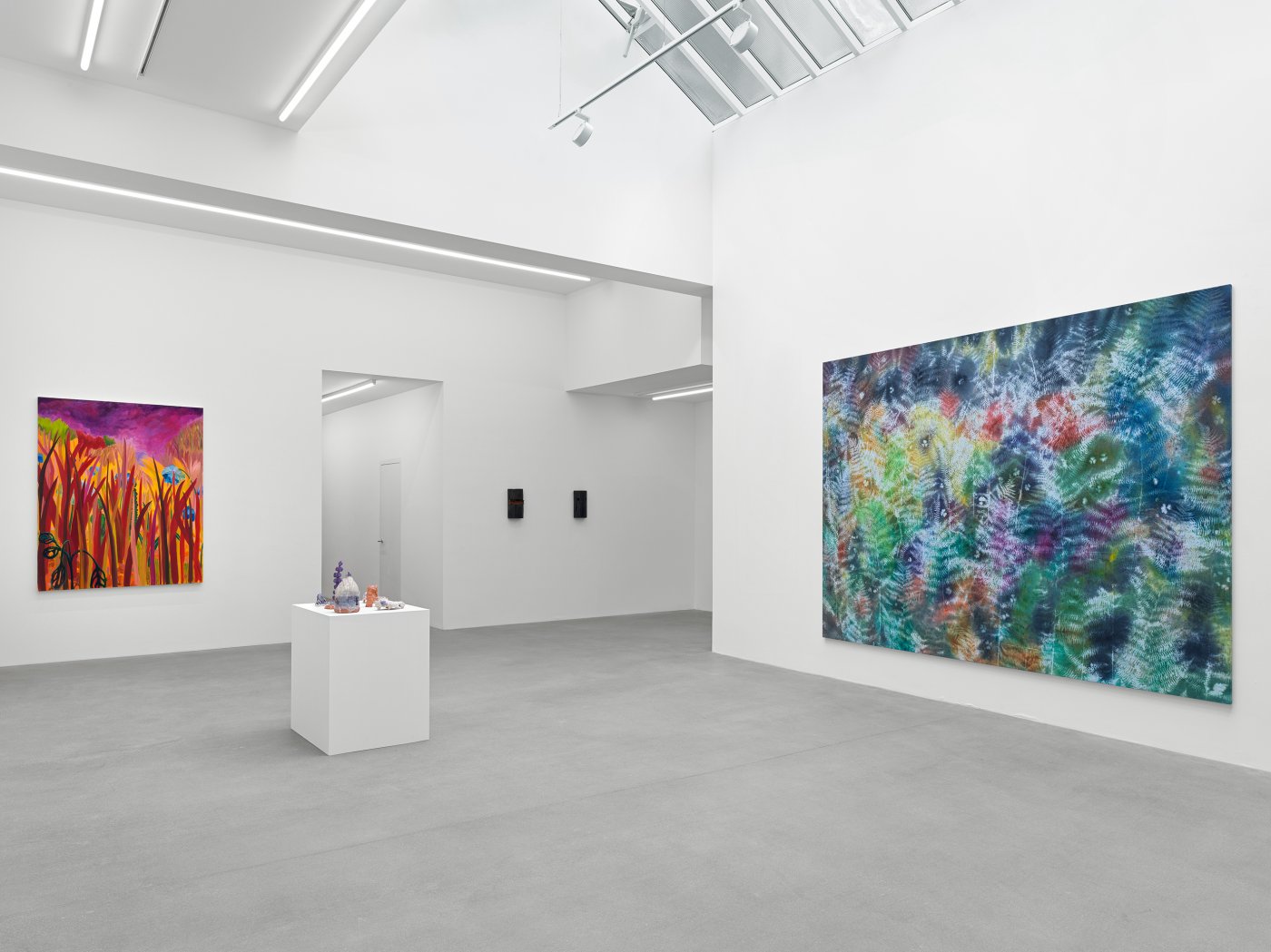 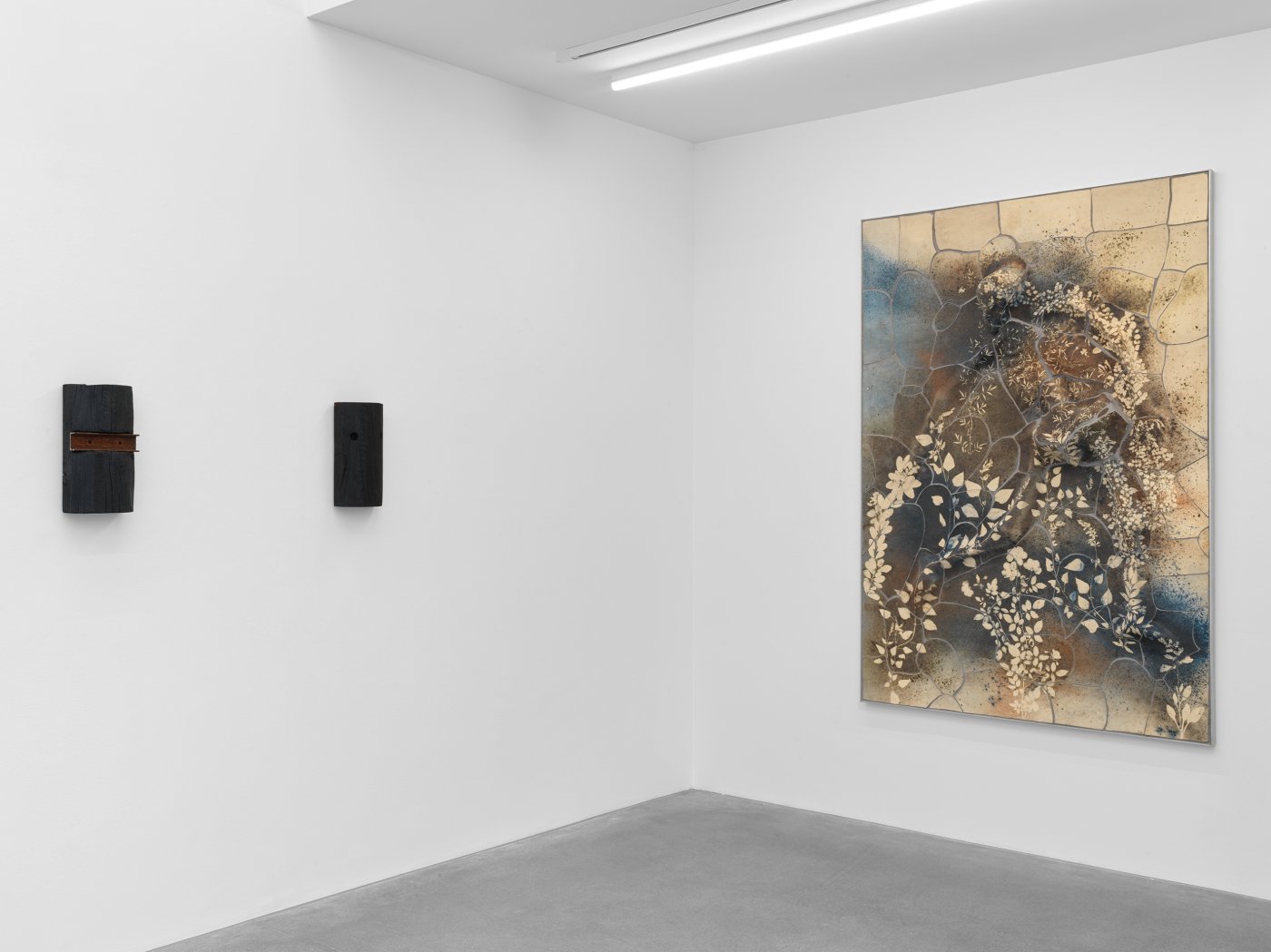 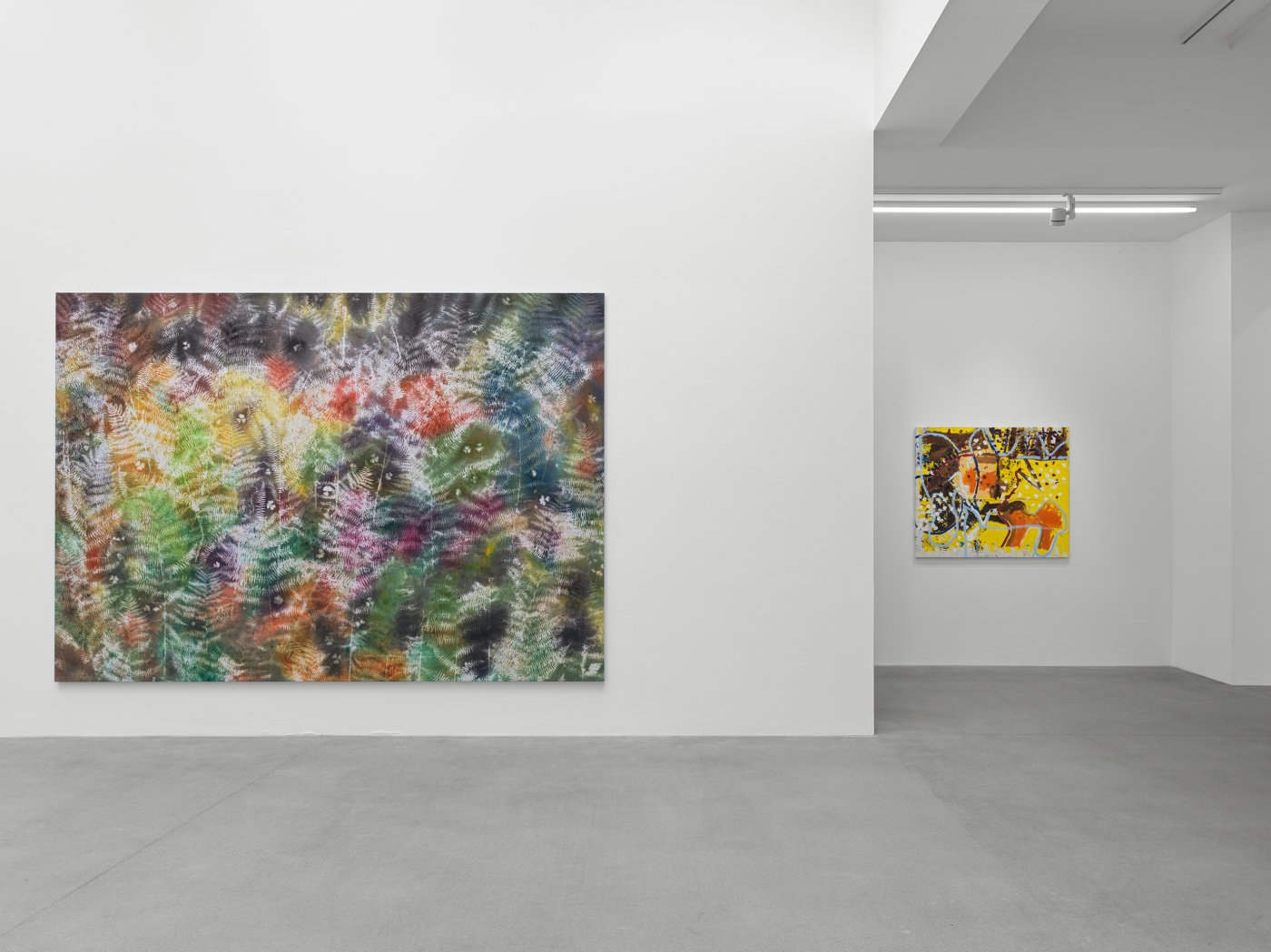 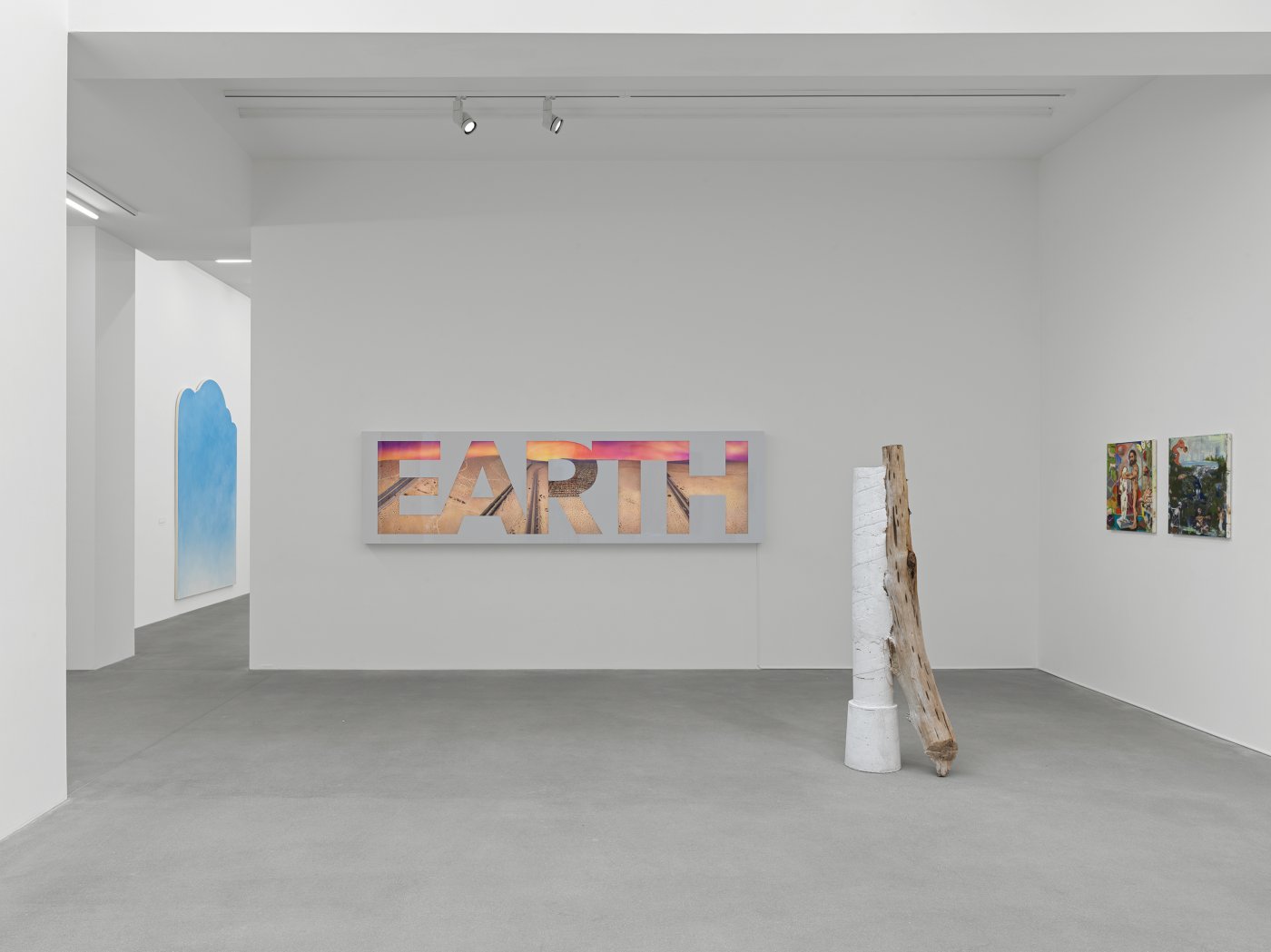 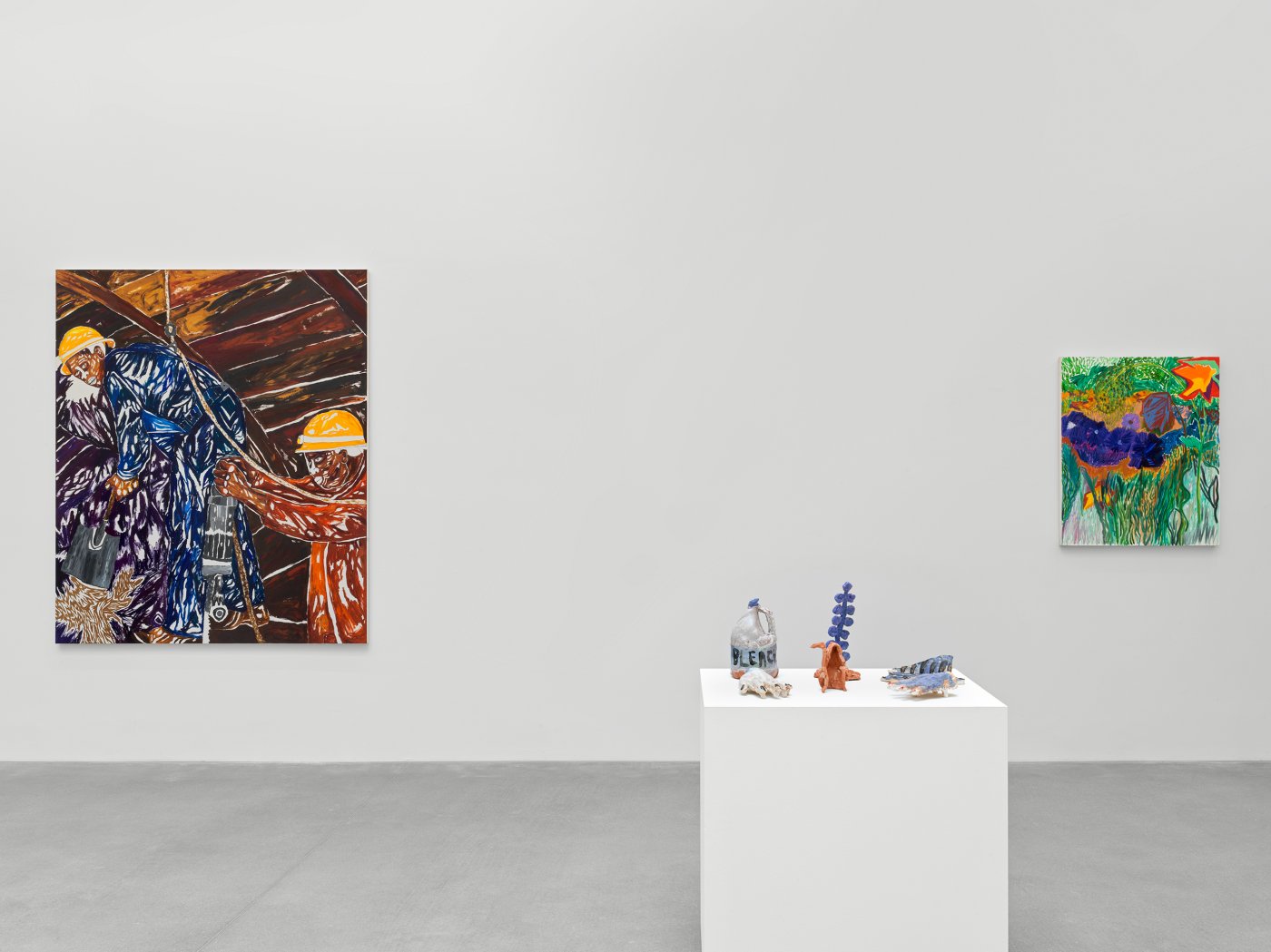 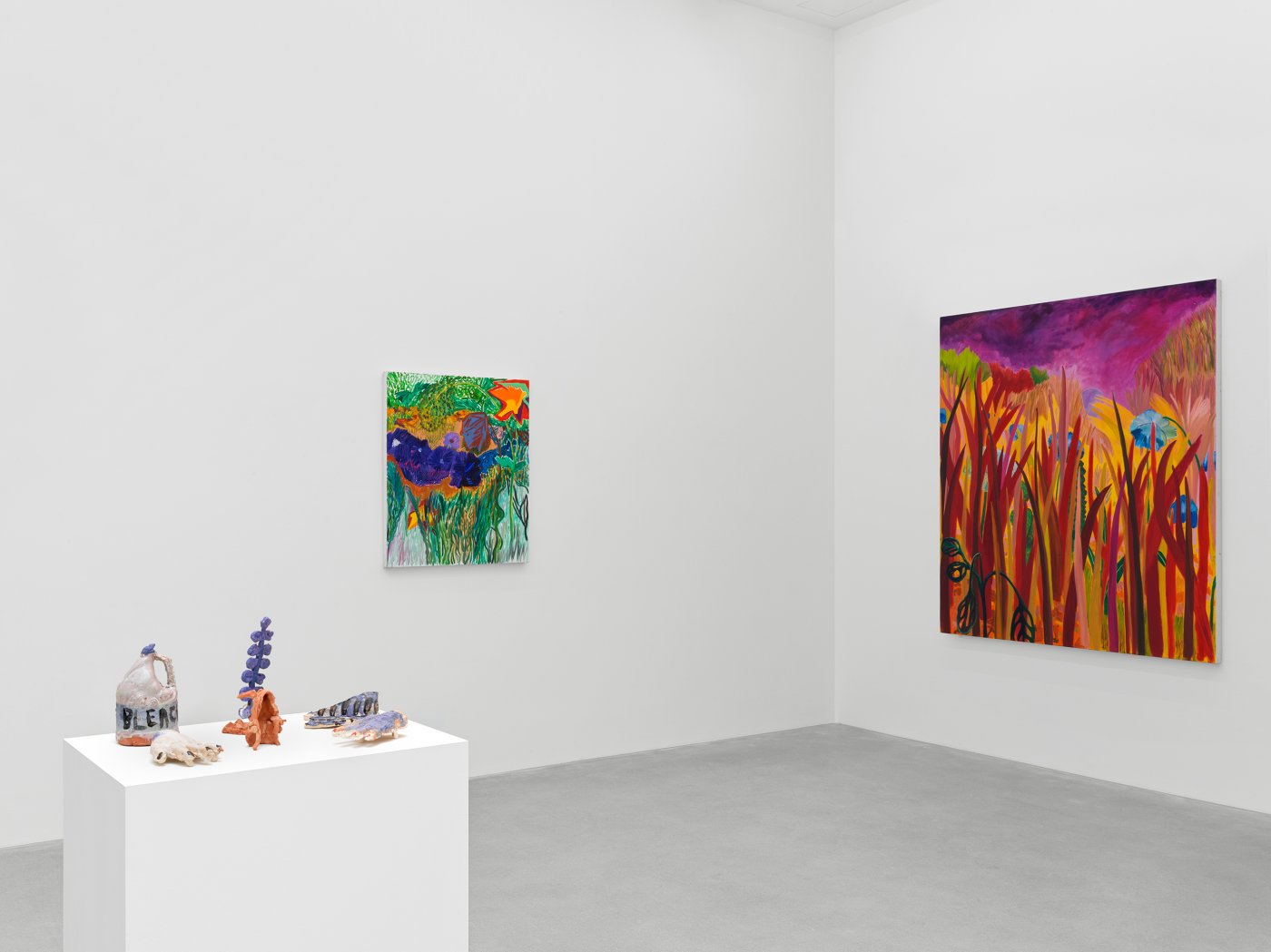 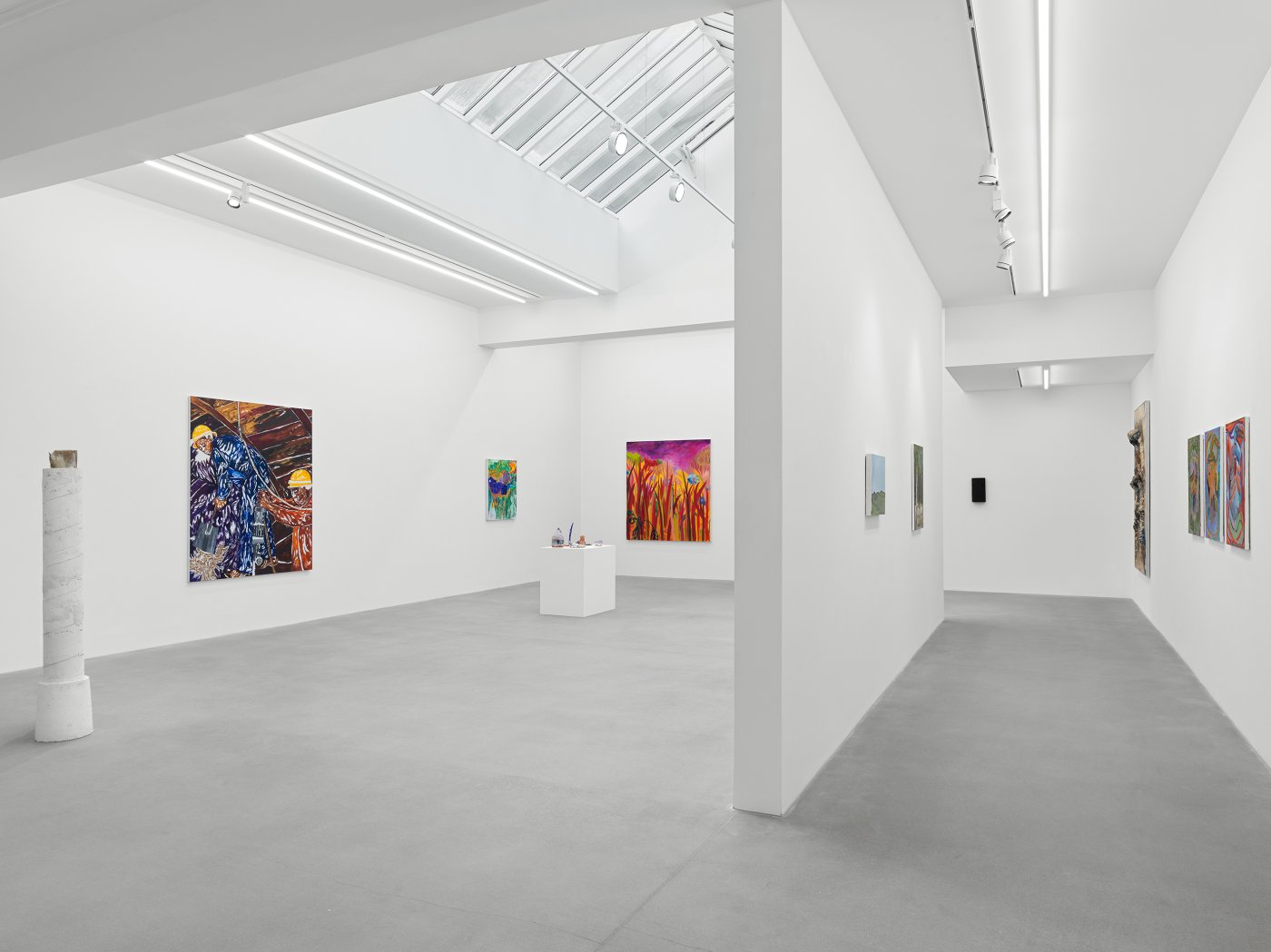 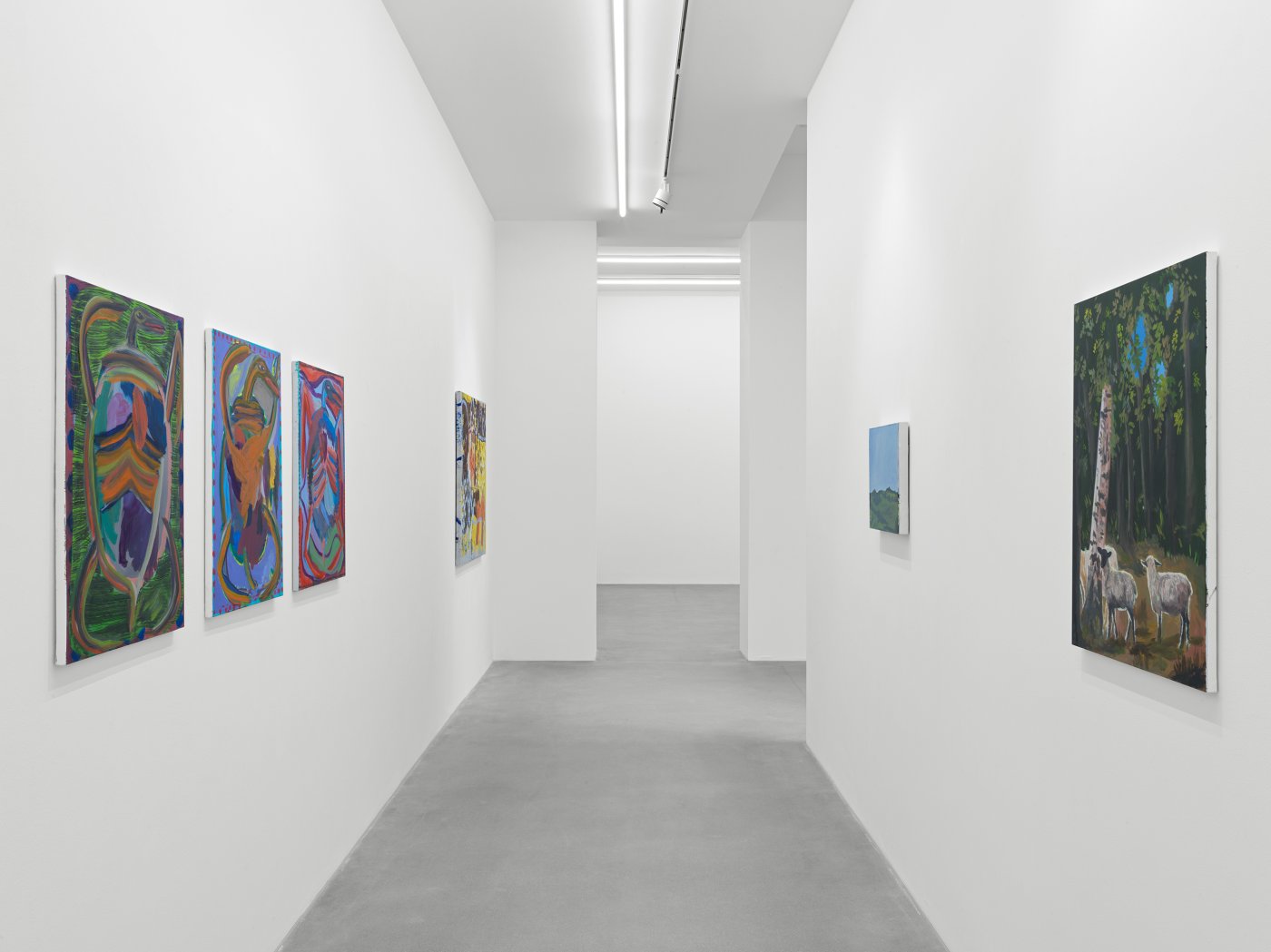 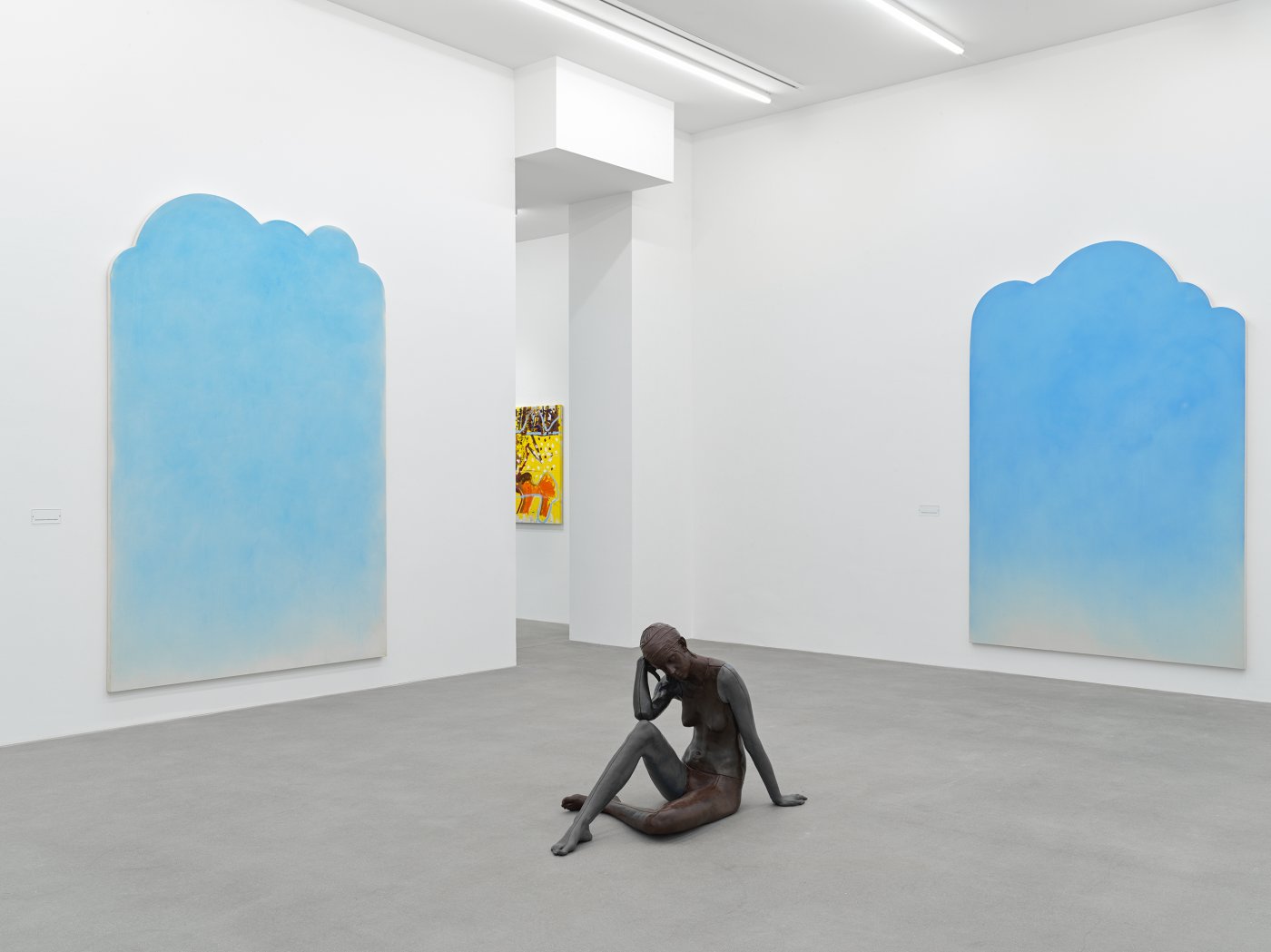 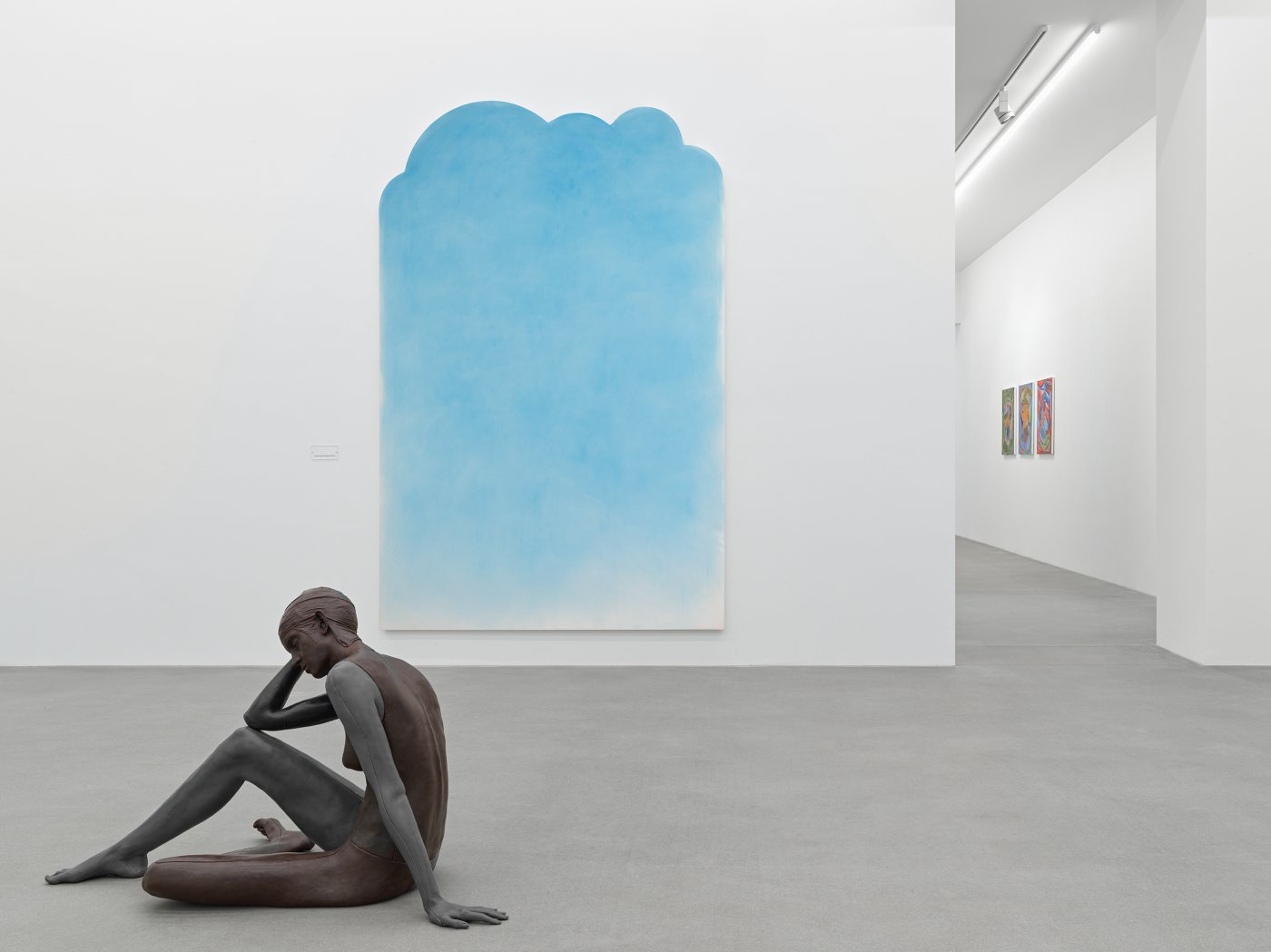 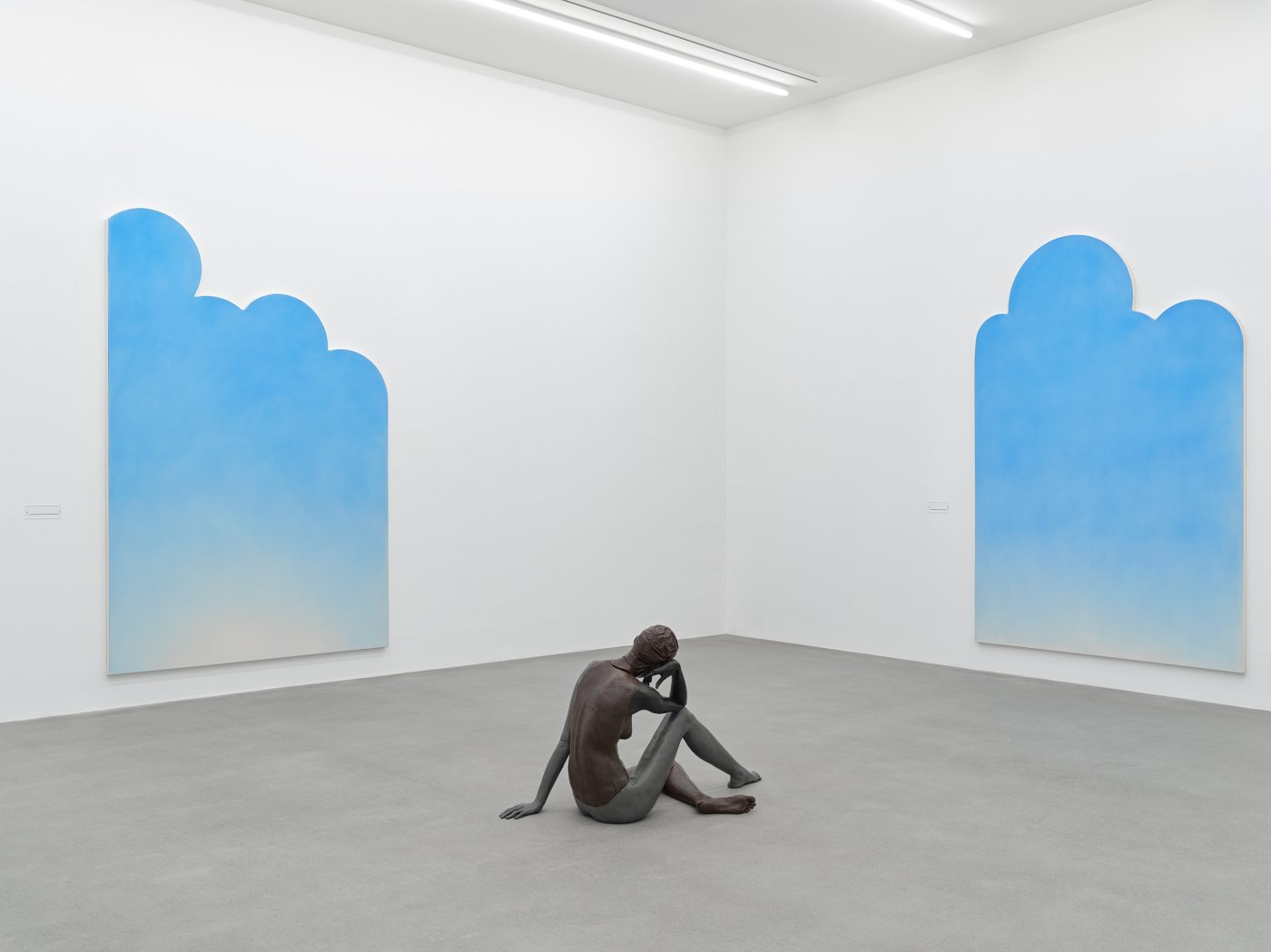 Doug Aitken (born 1968 in Redondo Beach, CA, US) has developed a multimedia oeuvre that both studies and leads into new art forms. His work spans a wide array of mediums, integrating film, sound, photography, sculpture, performance, happenings, and site-specific installations. He creates immersive multimedia landscapes and disrupts the conventions of the contemporary art world.

Jean-Marie Appriou’s (born 1986 in Brest, FR) sculptures evoke archaic forms and are inspired by contemporary but also mythological and futuristic worlds. His works are often crafted from aluminum and bronze, the design possibilities of which the artist furthers through experimentation with finishes and in combination with other materials, including blown glass. By alluding to familiar forms, be they animal or human, and developing his unique, almost alchemical approach to his source material, Appriou has created his very own mythology.

Joe Bradley’s (born 1975 in Kittery, ME, US) versatile painterly oeuvre has suggested allusions to Abstract Expressionism, to Philip Guston, or to Minimal Art, all with a very contemporarily distant, not entirely tangible twist that nonchalantly oscillates between irony and melancholy. Recently, however, Bradley has developed a new visual language that is entirely his own and also sparked a dialogue between his canvases and his works on paper—as if they were nodding to each other.

Verne Dawson’s (born 1955 in Meridianville, AL, US) approach to subject matter in his paintings is that of an anthropologist with knowledge of ancient concepts of time telling, how they have affected our environment and humankind throughout social and technical evolutions, and in what ways they are still present in our contemporary, everyday culture. He bridges the gap between past, present, and future, with astronomy and myth. His paintings of ideas and stories express an integration of civilization with nature and the ways we perceive and experience life.

Concerned with the intimacy of time, the illustration of place, and exploration of mortality, Sam Falls (born 1984 in San Diego, CA, US) has created his own formal language by intertwining photography’s core parameters of time and exposure with nature and her elements. Working largely outdoors with vernacular materials and nature as a site-specific subject, Falls abandons mechanical reproduction in favor of a more symbiotic relationship between subject and object. In doing so, he bridges the gap between photography, sculpture, and painting, as well as the divide between artist, object, and viewer.

Louisa Gagliardi’s (born 1989 in Sion, CH) paintings exist as reflections: internally, of artist and viewer, and of the rapid acceleration of technology in our visualized and socialized worlds. Their liminal status, as both digitally rendered images and physically confronting objects, speaks as much to contemporary concerns of self-mediated personas as they do to the compositions and narratives of the classics of art history.

A self-trained artist, Chase Hall (born 1993 in Saint Paul, MN, US) works in painting, sculpture, photography, video, and audio to scrutinize America’s past and present while interrogating the realities of being biracial. As a mixed-race male raised across America, Hall examines humanity through his individual hybridity and his usage of coffee as a pigment and cotton canvas as a conceptual white paint. Each canvas is imbued with the legacy of Hall’s personal history and a non-monolithic Black experience.

Shara Hughes (born 1981 in Atlanta, GA, US) refers to her paintings and drawings as psychological or invented landscapes, a term that derives from her working process and describes the way her paintings are created only in the very moment of painting. Hughes states that during painting, her works are created purely from the inside; this inside, however, is strongly informed by a deep knowledge of art history as well as the work of contemporary peers, as her frenetic colors and vibrant brushstrokes show.

Karen Kilimnik’s (born 1955 in Philadelphia, PA, US) small-scale paintings and drawings are suffused with her own imaginative ideas and draw viewers into a world of grandeur, humor, and fantasy. Scenes of pastoral landscapes, elven forests, castle exteriors, figures, and horses give the viewer a direct encounter with the unguarded verve of Kilimnik’s wit and her engagement with history, always balanced by her assured sense of color and form.

Sofia Mitsola (born 1992 in Thessaloniki, GR) paints primarily female, invented characters and the atmospheres they inhabit using vibrant colors and a monumental scale. The female body is a recurring motif that allows her to play with ideas of confrontation, power, and control. Her protagonists’ coquettish gazes are always directed at the viewer—inviting, controlling, and consuming them. Appearing as individuals or in groups, her subjects are composed using radiant opaque colors and translucent layers that mimic water, an element that symbolizes transformation and catharsis.

Ugo Rondinone (born 1964 in Brunnen, CH) is recognized as one of the major voices of his generation, an artist who composes searing meditations on nature and the human condition while establishing an organic formal vocabulary that fuses a variety of sculptural and painterly traditions. The breadth and generosity of his vision of human nature have resulted in a wide range of two-dimensional and three-dimensional objects, installations, videos, and performances. His hybridized forms, which borrow from ancient and modern cultural sources alike, exude pathos and humor, going straight to the heart of the most pressing issues of our time, where modernist achievement and archaic expression intersect.

Josh Smith (born 1976 in Okinawa, JP) is renowned for the diversity of his artistic practice and for the wide range of different styles in which he works. Besides painting, his work encompasses print, sculpture, drawing, and collage. Smith’s motifs often include iconic images, such as two palm trees on a beach, a fish, a dinosaur, a half-cut melon, the grim reaper, or a devil-like figure. These subjects can be easily rendered by most anyone who cares to try. Therefore, the rendering of an image does not over-engage itself with any attempt towards pictorial virtuosity. For Smith, painting, print, sculpture, drawing, and collage are largely hosts for expression and experimentation.

The sculptor Oscar Tuazon (born 1975 in Seattle, WA, US) works with natural and industrial materials to create inventive objects, structures, and installations that can be used, occupied, or otherwise engaged by viewers. With a strong interest in and influence from architecture and minimalism, Tuazon turns both disciplines on their heads as he mangles, twists, combines, and connects steel, glass, and concrete as well as two-by-fours, tree trunks, and found objects. Tuazon produces objects and environments that draw out humanity’s relationship to buildings, interior and exterior spaces, and other objects and structures.