Eric Fischl: The Krefeld Project brings together ten historic paintings from the artist’s important series initiated in 2002. Portraying two figures amid elegant interiors of a modernist villa, the works present an affecting narrative of human connection set between fact and fiction. 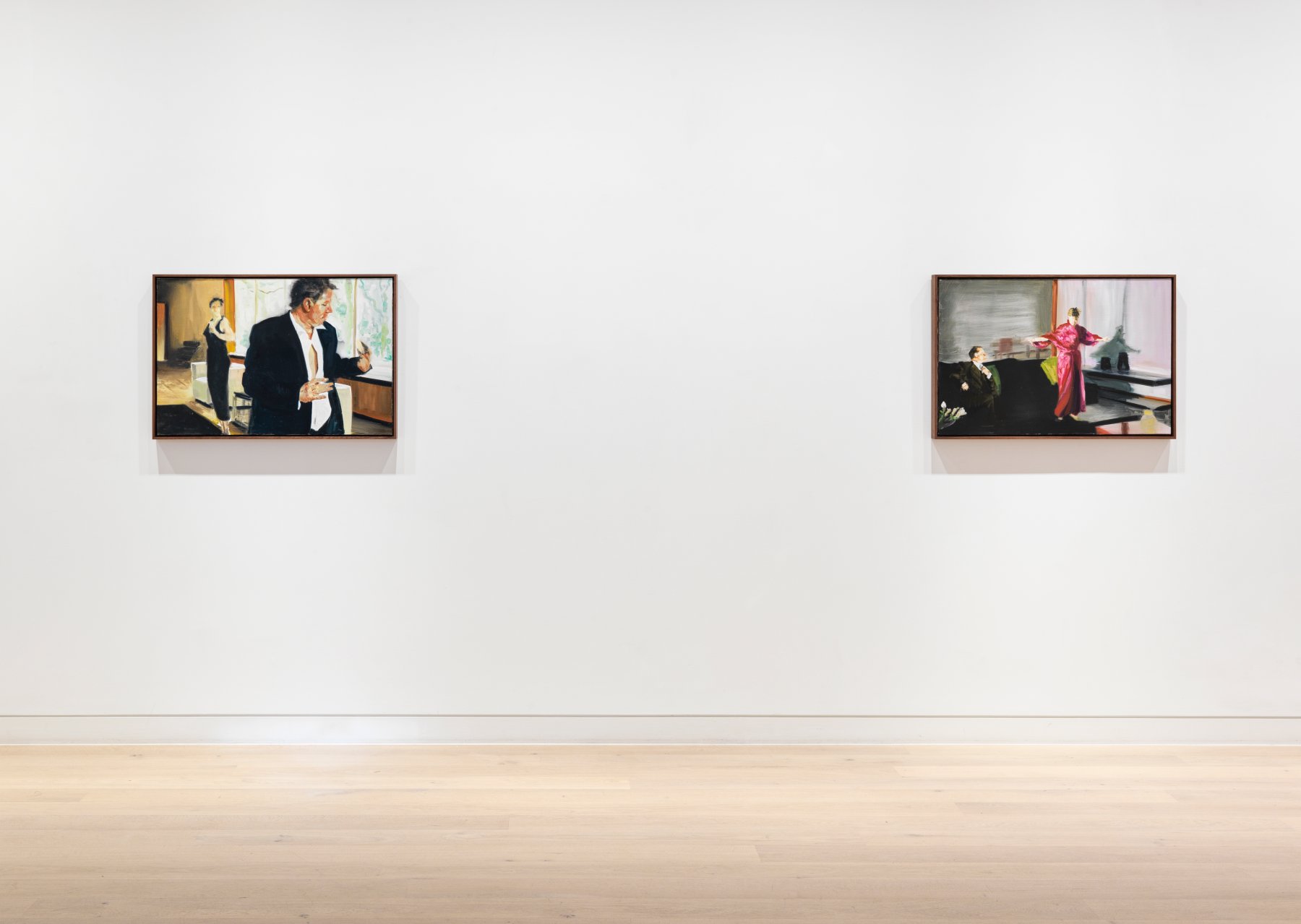 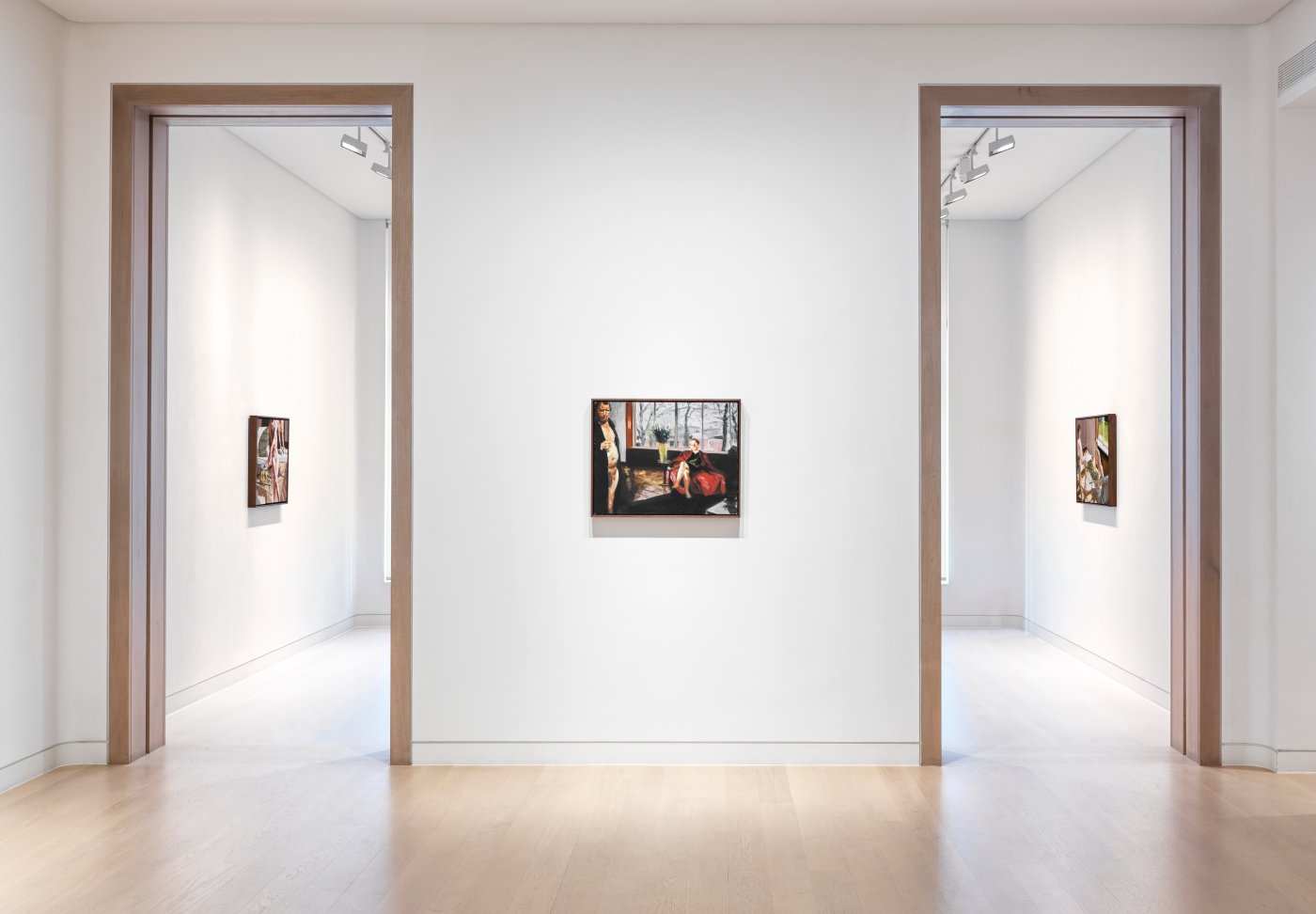 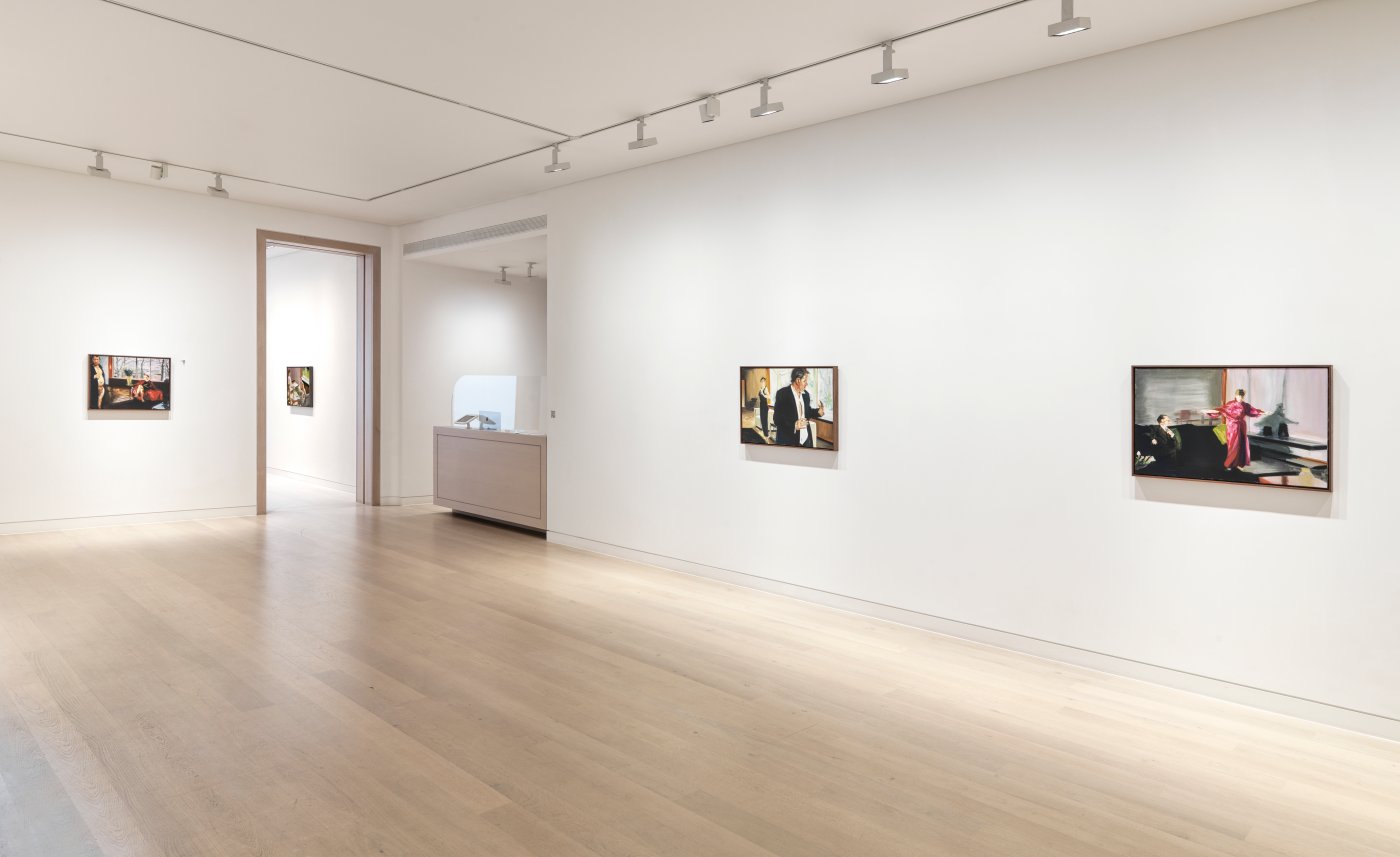 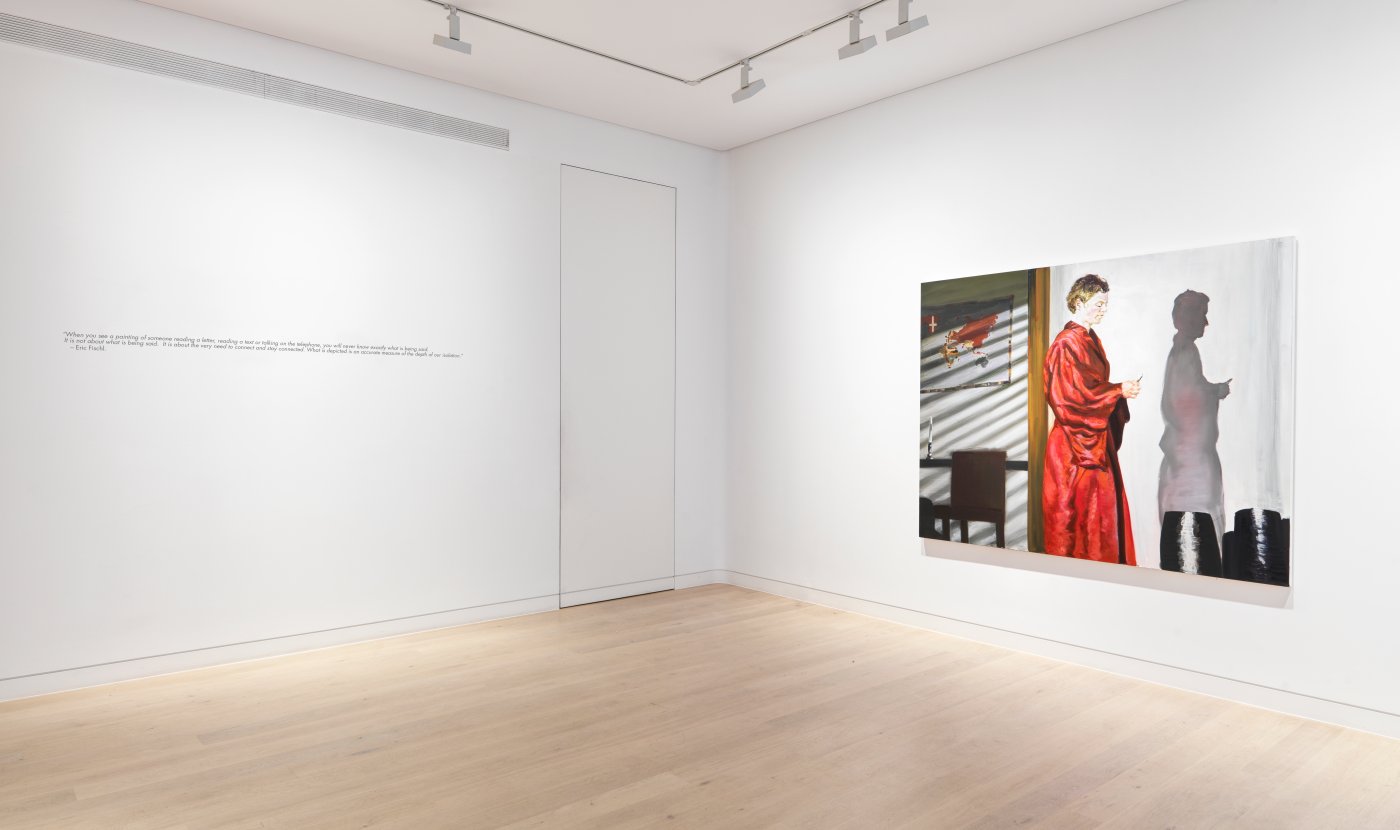 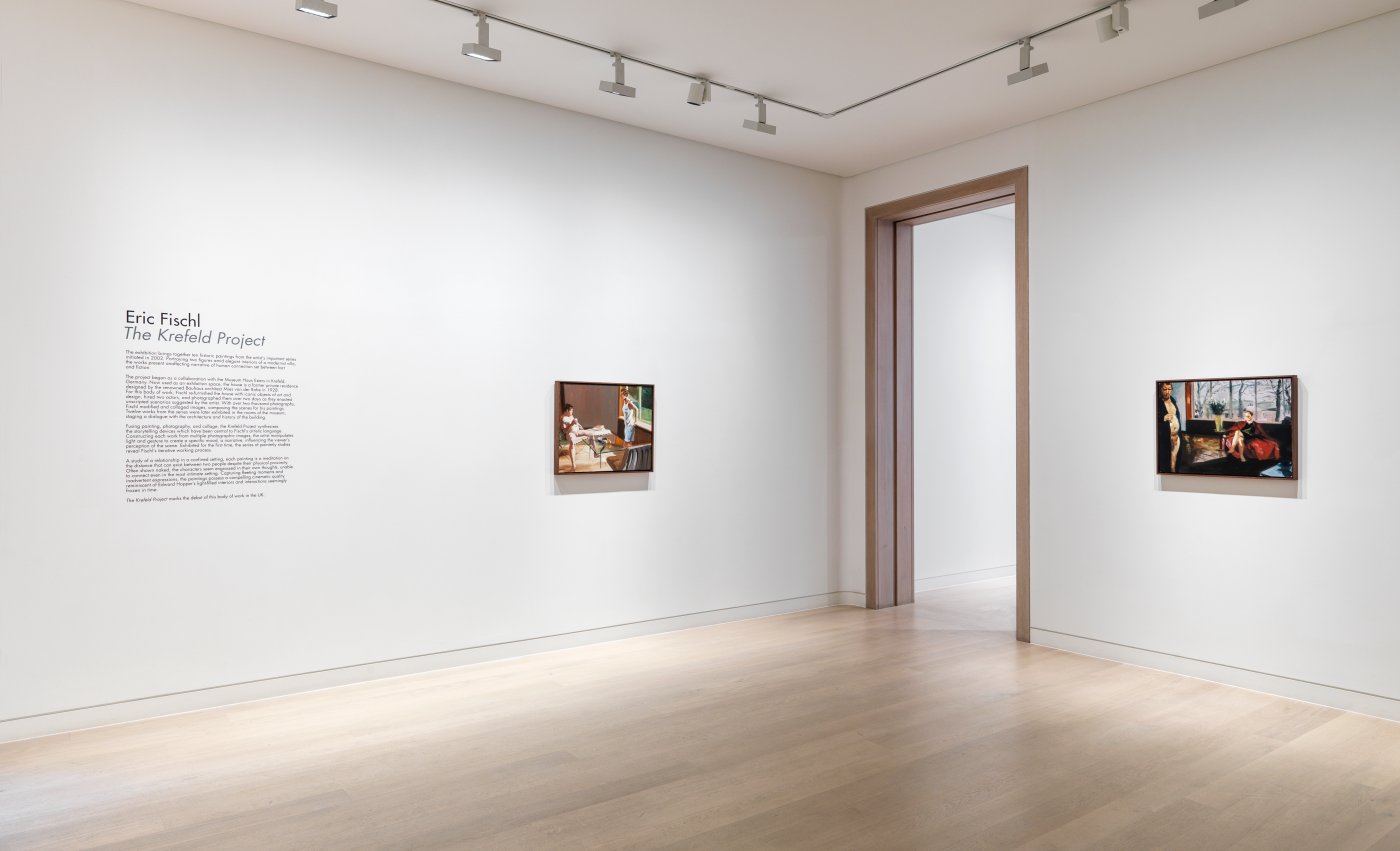 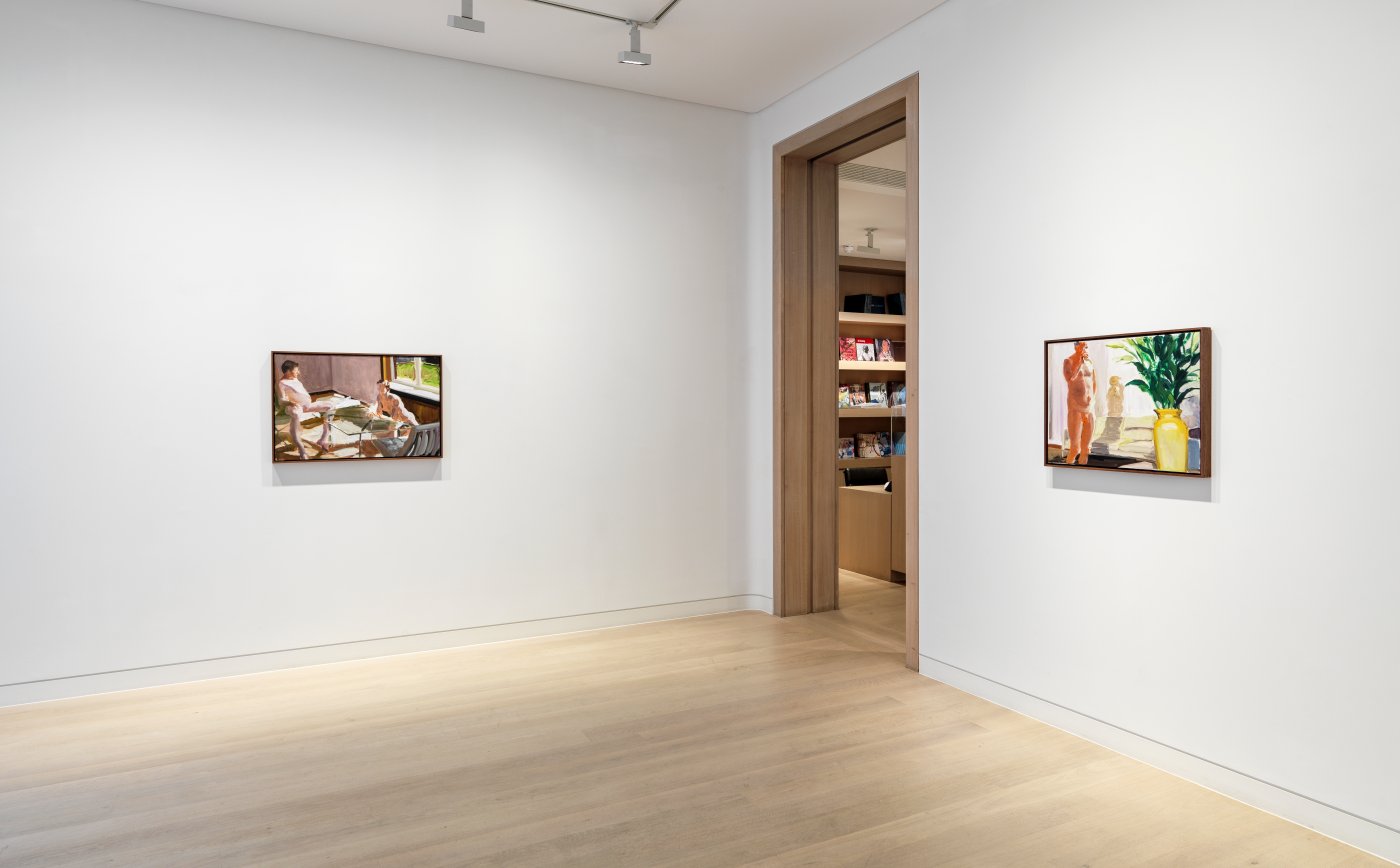 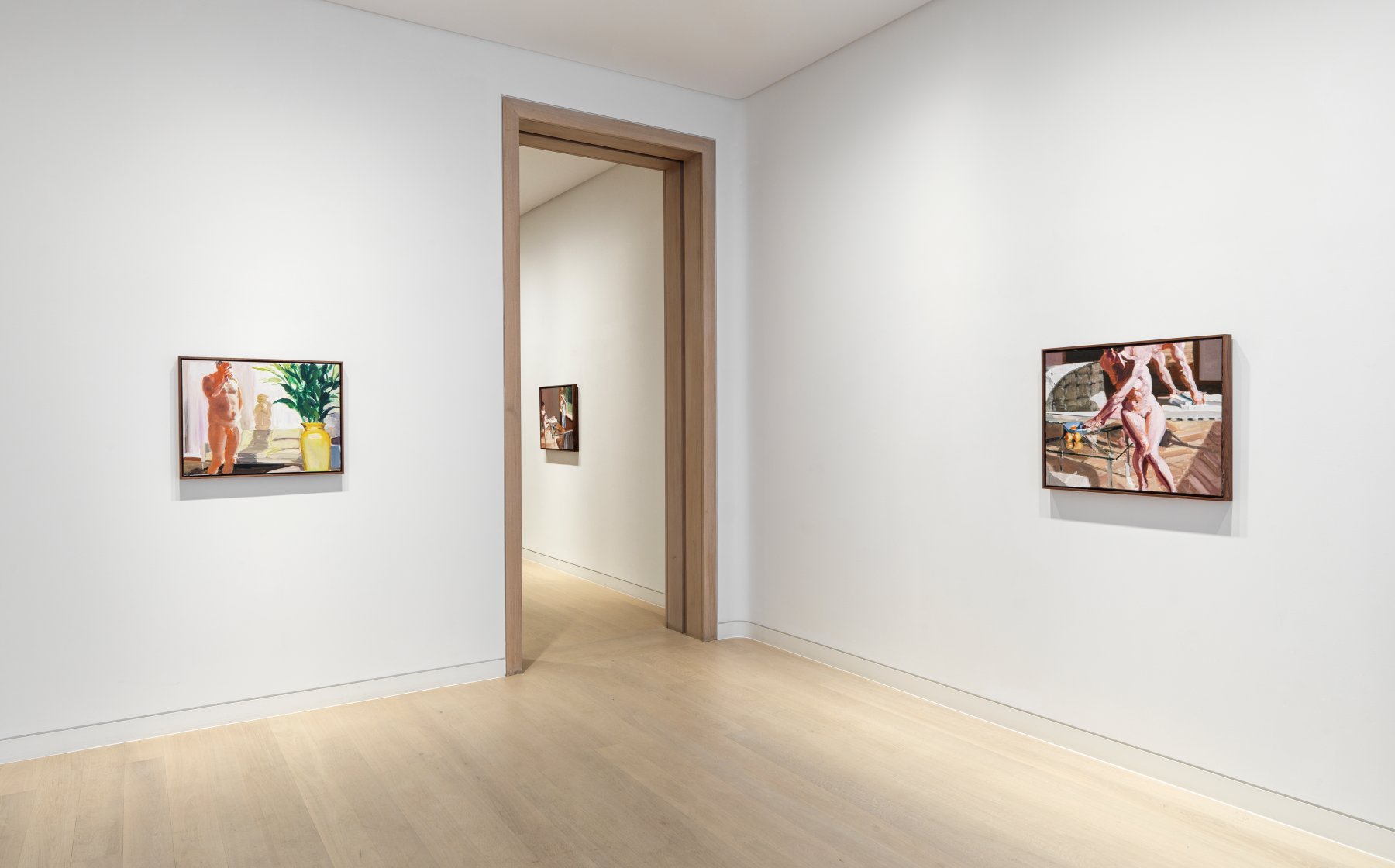 The project began as a collaboration with the Museum Haus Esters in Krefeld, Germany. Now used as an exhibition space, the house is a former private residence designed by the renowned Bauhaus architect Mies van der Rohe in 1928. For this body of work, Fischl re-furnished the house with iconic objects of art and design, hired two actors, and photographed them over two days as they enacted unscripted scenarios suggested by the artist. With over two thousand photographs, Fischl modified and collaged images in Photoshop, composing the scenes for his paintings. Twelve works from the series were later exhibited in the rooms of the museum, staging a dialogue with the architecture and history of the building.

Fusing painting, photography, and collage, the Krefeld Project synthesises the storytelling devices which have been central to Fischl’s artistic language. Constructing each work from multiple photographic images, the artist manipulates light and gesture to create a specific mood, a narrative, influencing the viewer’s perception of the scene. In Text (After Vermeer), the contrast of radiant sunshine with artificial light falling on the figure of the woman imbue her quiet contemplation with a sense of unease. Portraying her in profile, in the room featuring Mappa by Alighiero Boetti, the artist references the setting of Vermeer’s painting Woman Reading a Letter (1663). Caught in white light and casting a sharp shadow, Fischl’s protagonist appears to inhabit a separate realm, her attention directed elsewhere, our sense of passing time transformed.

Exhibited for the first time, the series of painterly studies reveals Fischl’s iterative working process. Two paintings foreground similar male figures suggesting the artist’s experimentation with the story line and the visual cadence of colour and form in the composition. Set in the sunroom of Haus Esters, several works highlight the intentionality with which Fischl selected and arranged props for the project. The elongated yellow vase with lilies changes its location throughout the series, whilst two oranges positioned in the centre of the coffee table insinuate the sense of desire and erotic tension. As the artist explained, “A bowl of oranges isn’t necessarily a bowl of oranges, and I’m aware of that. I’m aware that bananas and apples have sexual connotations, so I use them for that reason. […] I think that is very much the way I use objects. It’s about anticipation of disappointment. We put so much faith in them. Objects represent so many things: stability, happiness, affluence. They represent our lives back to us. The objects I choose are essential to the piece.” [1]

Invariably aware of their partner’s presence, each protagonist of the Krefeld Project rarely turns to meet the other’s gaze. Describing a distinct and poignant existential drama, the series however leaves the details of the narrative tantalisingly undefined. As the artist later recalled, “I started each painting with the same basic questions: Whose house is it? Are they married? Who are they? Is it an affair? […] Each scene was full of emotion and drama that left unresolved the questions that had inspired the scene.” [2] A study of a relationship in a confined setting, each painting is a meditation on the distance that can exist between two people despite their physical proximity. Often shown naked, the characters seem engrossed in their own thoughts, unable to connect even in the most intimate setting. Capturing fleeting moments and inadvertent expressions, the paintings possess a compelling cinematic quality reminiscent of Edward Hopper’s light-filled interiors and interactions seemingly frozen in time.

The Krefeld Project marks the debut of this body of work in the UK and will coincide with an exhibition of new paintings by Eric Fischl that will inaugurate the gallery’s Paris location, opening in October 2021.

Courtesy of the artist and Skarstedt Gallery