The Frith Street Gallery Summer Show Found Forms brings together work by gallery artists who start with a found object or material, transforming these objects or mediums into new and distinct forms. The exhibition includes Cornelia Parker’s Poison and Antidote Drawings, Tacita Dean’s Significant Form (Group Four), a group of Fiona Banner aka The Vanity Press’s Full-Stop Seascapes, a suite of ink drawings by Anna Barriball, a new set of prints by Raqs Media Collective, as well as two ‘mannequin’ sculptures by Daniel Silver. Found Forms highlights the sustained importance of the objet trouvé for contemporary artists. 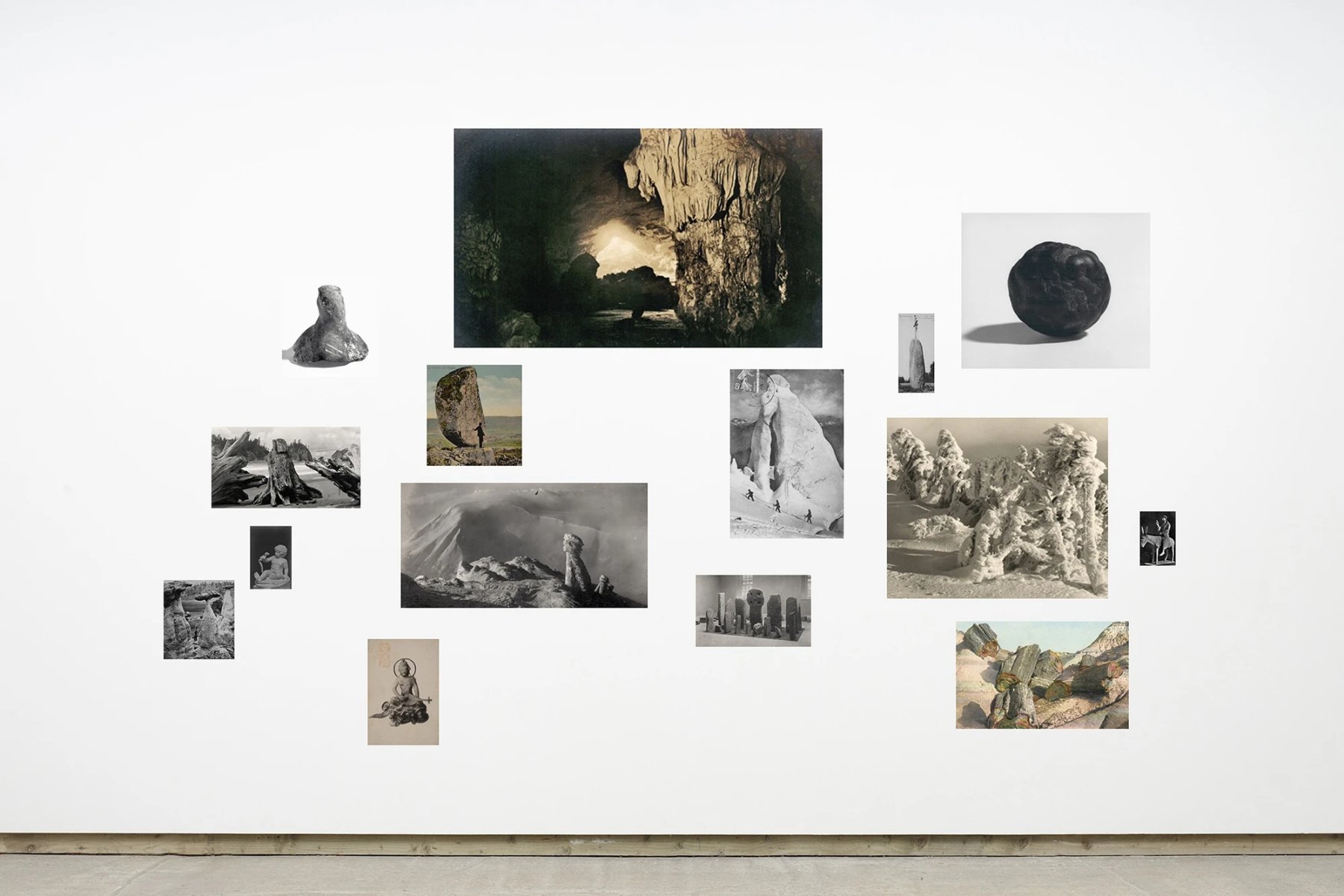 Tacita Dean’s Significant Form (Group Four) (2021) is a group of fifteen images, drawn from Dean’s postcard collection, hung on the wall in a constellation format. This selection emerged from Significant Form, which consists of a total of 130 images, each re-photographed and hand-printed at various scales. This work was exhibited at Hepworth Wakefield in 2021. The fifteen images in Significant Form (Group Four) feature stone and landscape formations, snow-encrusted trees, the atmospheric interior of a cave, tree trunks on a beach, and even European and Indian sculptures; in each case, the postcards depict a distinct time and place, yet also a kind of readymade sculpture. The array of forms invites the viewer to move their gaze across the wall, alighting on the different settings and sites, revelling in the unusual forms.

For their Bestiary series of prints (2021), Raqs Media Collective drew upon historical and popular illustrations of animals to create an array of beasts that range from the mythological to the extinct. The animals are immediately recognisable, yet they are also stylised, filtered through the cultural conventions of a particular place or time. Each animal is accompanied by an ambiguous form that is the image of a human tear, documented through a microscope so that the salt crystals are visible, and embossed with gold foil. By appropriating animal imagery from different cultures, accompanied by a tear laced with precious metal, Bestiary explores what it means to be human in companionship with other forms of life, and our tendency to attribute value or sentiment to animals or use them as characters in moral lessons.

The materiality of language is central to the work of Fiona Banner aka The Vanity Press. Her Full-Stop Seascapes start with a found painting of a romantic or stormy sea, usually with a noble ship punctuating the horizon. She then paints over the boat or boats, replacing them with large, boulder-like full stops or other punctuation marks, tainting the landscape with language. The conventions of landscape are as constrained as language itself, and here Banner disarms a range of cultural clichés. In Neon Sans (2022), the top of a question mark seems to emerge from the waves like a sea monster, whereas in Pop, Pop, Pop (ellipsis) (2022), three cuboid monoliths are tossed in the waves like lost chunks of a sentence adrift in a storm.

To make the set of drawings that comprise Windows with Water and Ink (2013), Anna Barriball covered a pane of textured glass in black ink and pressed paper into its surface. When the ink had dried the paper was first bathed in water, then in a solution of ink and water. Each piece was then dipped into a solution with different concentrations of ink and water, creating a scale of grey across the pieces of paper. The process, reminiscent of that used to develop photographs with chemicals, leaves behind a strange, photographic trace of the original patterned glass. Barriball transforms a commonplace thing – an old, patterned window – into a measured horizon of subtly beautiful abstractions in a process reminiscent of the serial artworks of Sherrie Levine.

Cornelia Parker devised her Poison and Antidote Drawings (2010) while on residency in Texas, procuring venom from a rattlesnake farm and antidote from a doctor, mixing black ink with the venom, while the white ink is blended with its antidote. The resulting drawings take the form of Rorschach inkblots, a form designed to reveal the subconscious of patients undergoing analysis. With the Poison and Antidote Drawings, Parker confronts one of her greatest fears – snakes – while also repurposing their venom to create drawings that are at once haunting and beautiful, deadly and lifesaving, inviting the viewer to confront their own subconscious in symmetrical, monochrome patterns.

Daniel Silver’s Ira Dancer (2018) is a hybrid sculpture. Starting with the body of a mannequin, Silver upends our expectation of an object so familiar by topping the cloth-clad torso with a head carved in onyx. The stone conveys a feeling of something permanent, or out of time, which contrasts with the more mundane blue cotton of the figure’s torso. For Silver, the mannequin is an everyday found object that echoes across art history, its idealised forms reminiscent of Classical nudes. Inspired by looking at dancers, Silver’s sculptures are equally characterised by a fascination with the forms of movement and stasis, ephemerality and permanence, everydayness and the uncanny.