Gregor Hildebrandt: Was geht uns die Sonne an (What Does the Sun Matter to Us)

Gregor Hildebrandt: Was geht uns die Sonne an (What Does the Sun Matter to Us)

130 Orchard Street, NY 10002 Gregor Hildebrandt: Was geht uns die Sonne an (What Does the Sun Matter to Us)


Perrotin New York presents What Does the Sun Matter to Us, a solo exhibition by Gregor Hildebrandt. Drawing deep inspiration from music, cinema, and poetry, Hildebrandt’s installations make use of disused analog entertainment media— cassette and VHS tapes, vinyl records, and various accoutrements used to maintain and store such objects—in an attempt to capture in time and space their immaterial content. 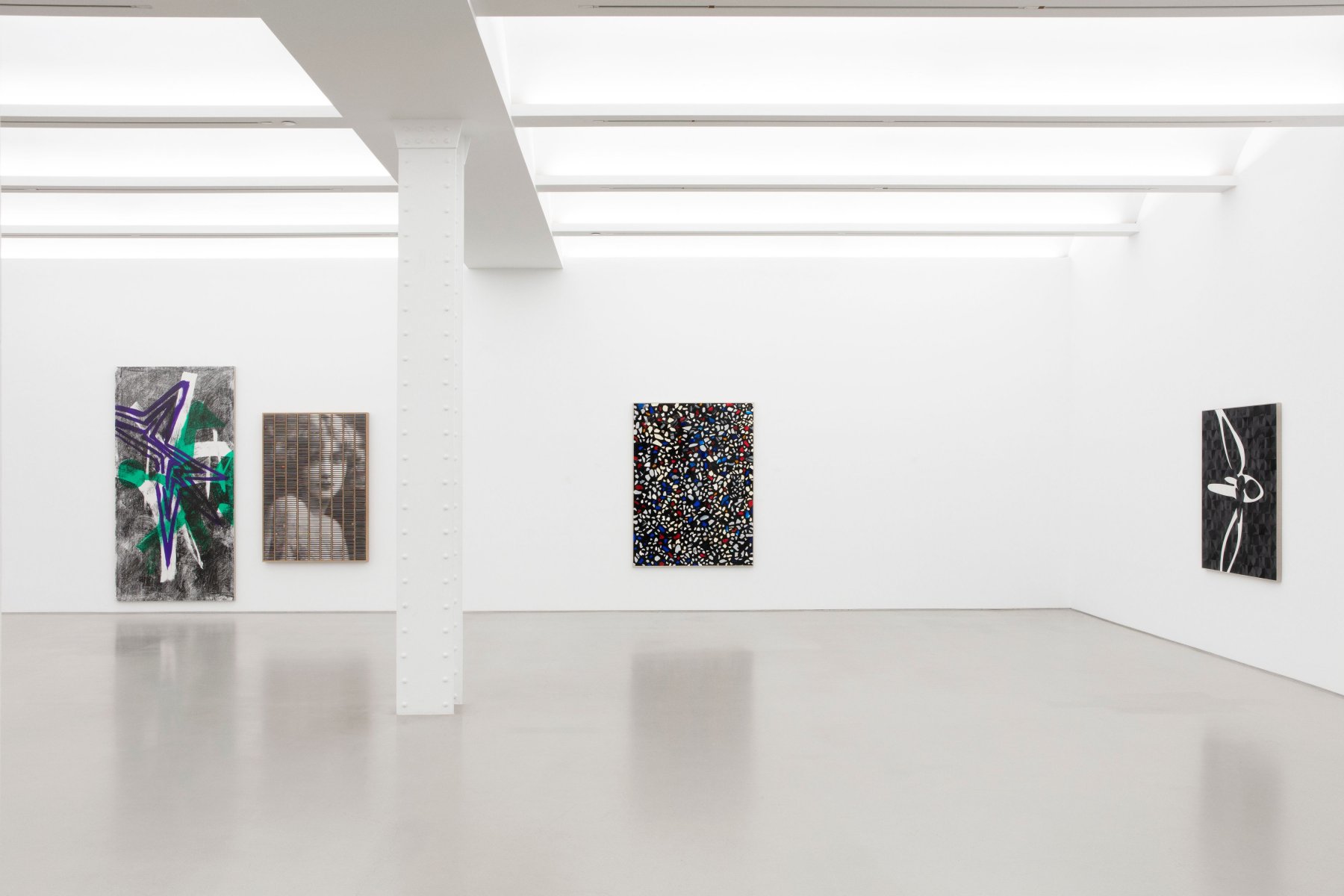 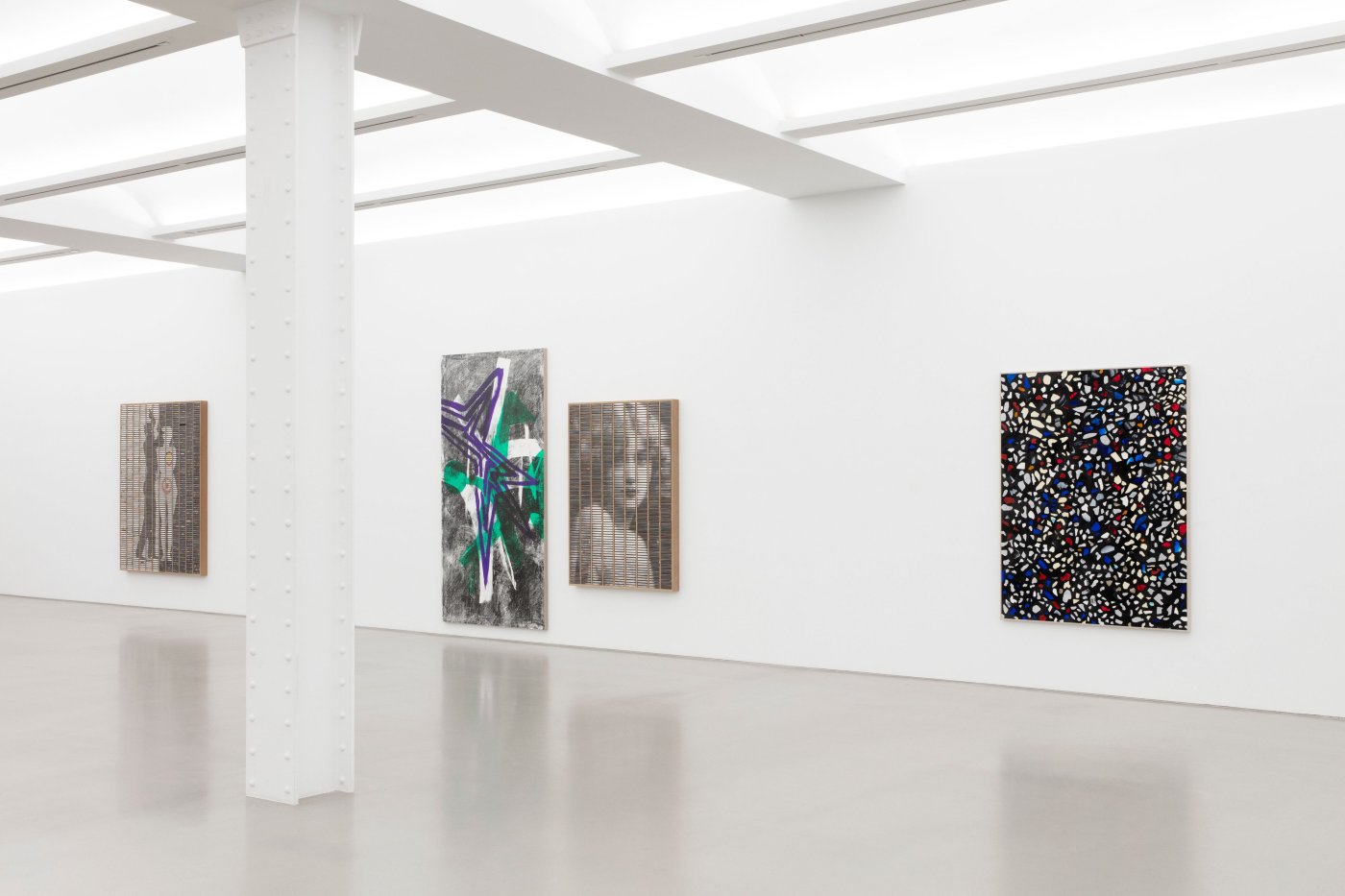 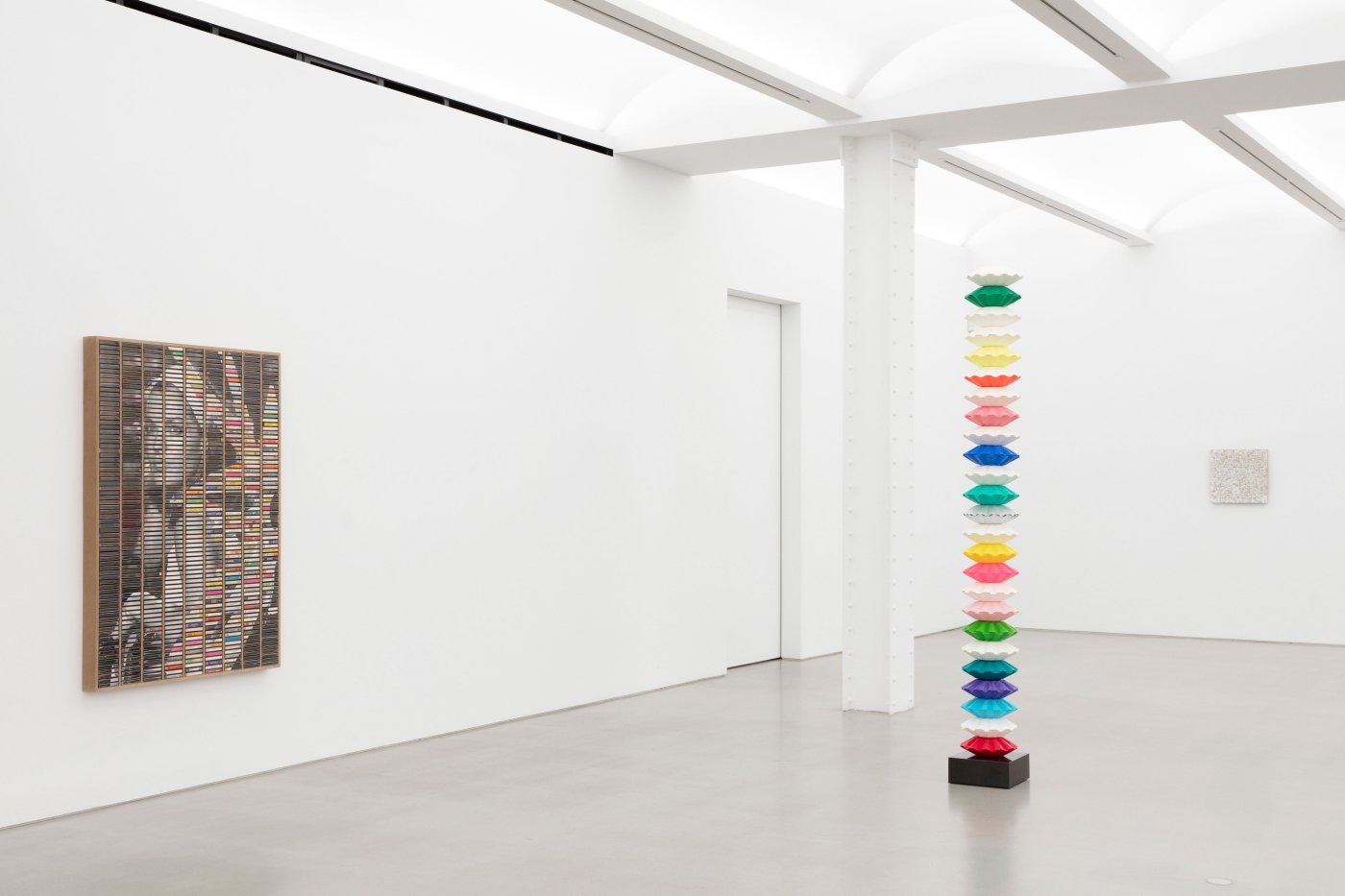 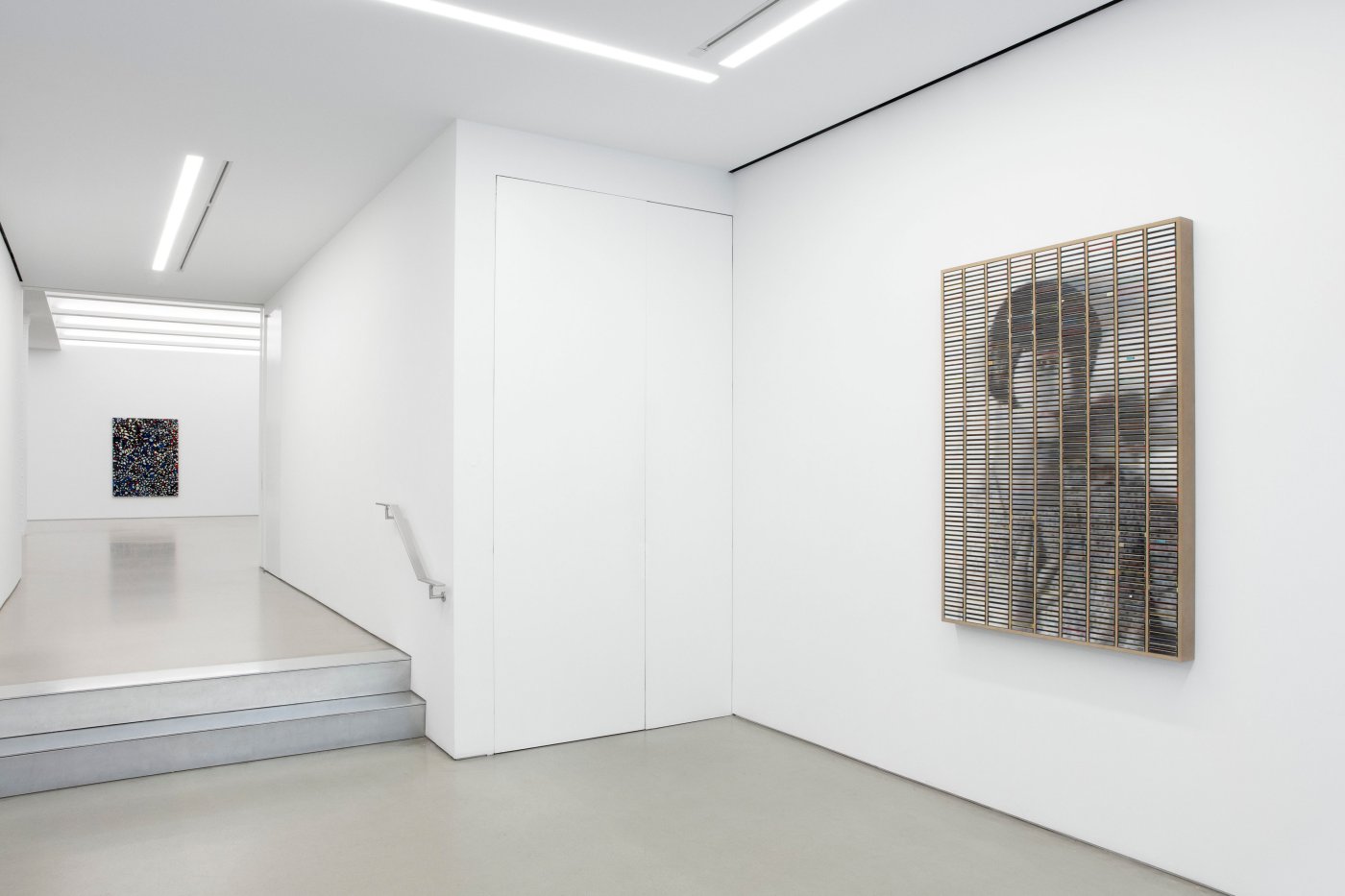 In his ongoing cassette shelf, tape rip-off, cut record, and record column series, Hildebrandt approaches his materials as objects haunted by personal and cultural history, even as the appearance of his finished works suggest abstract, minimal forms.

The title of this exhibition references a question posed by the German film theorist Siegfried Kracauer in his 1932 essay “The Cinema on Münzstraße,” named for a movie theater on a busy street near Alexanderplatz in Berlin—a street where Hildebrandt himself lived when he first moved to Berlin in the 1990s. Observing harshly a cohort of unemployed and idle midday cinema-goers as they take in a film starring Hans Albers, Kracauer wonders: “The sun is shining, but what do these people care about the sun?”

Kracauer himself appears as the subject of one of Hildebrandt’s cassette shelf works, his portrait reproduced on the spines of cassettes. Look closely, and you’ll notice that a splash of color disrupting the black-and-white image reveals the identity of the some of the tapes in use: Chopin, Pearl Jam, something hand-labeled “Techno.” The film theorist appears in the company of other cassette-shelf works depicting leading ladies who helmed the sort of mid-century mass cinema that might have been shown on Münzstraße or a place like it: Louise Brooks, Grace Kelly, Jean Simmons, Shirley Maclaine, Mary Nolan, and Romy Schneider. Each of their likenesses is given something like a body by the collection of music that silently bears the image. Histories converge, from the collective cultural memories that aggregate around women captured as icons at the height of their beauty and fame to the more diffuse and personal memories attached to a cassette whose content might have soundtracked someone’s living room or car. Quiet materials begin to hum with the suggestion of noise past.

Hildebrandt’s choices of subjects are motivated by memory and curiosity, but also, more plainly, reverence. Another cassette shelf bears the silhouetted image of a man and woman, a reproduction of Francis Picabia’s 1922 painting La Nuit espagnole. Emphasizing the duality within Picabia’s work, Hildebrandt has replaced its black and white surface with cassette inlays of those colors. Hildebrandt first saw La Nuit espagnole as a child, reproduced on a brochure for a production of the opera Carmeni and was greatly moved by it. He has often returned to Picabia’s work, as well as that of his dear friend and co-conspirator Marcel Duchamp, two artists who prefigured the interpenetration of music, cinema, and image that animates Hildebrandt’s practice.

The cassette shelves are paired here with Hildebrandt’s rip-off paintings. The artist has previously used cassette tape to produce these works, “recording” the magnetic tape on the surface of a canvas coated in adhesive, the result an abstract image that bears the trace of a silent song. These works are executed using VHS tape, in this case containing classic films loved by Hildebrandt: Irma La Douce (1963), A Streetcar Named Desire (1951), To Catch a Thief (1955), and Last Year at Marienbad (1961). Each tape produces two canvases, a positive and negative of the same “recording” process. Angular streaks of color— electric primary blue, yellow, and red; bolts of indigo and sheer washes of green—lend a subversively expressive feel to the otherwise austere canvases, some evidence of Hildebrandt’s private relationship to the films whose materials give content to the frame.

Among several cut-record works in the show, all made from LPs cut into fragments and then reassembled according to various patterns, are a matching pair of circles emblazoned with peacock-like birds surrounded by a floral motif. Based on an image of a church window Hildebrandt encountered in passing, one of the two, Pfau in Schwarz, is made from conventional black vinyl, requiring the glint of light on its grooved surface to reveal the intricate pattern it holds. The other, Vogel Hochzeit, makes use of transparent vinyl (produced on Hildebrandt’s own record label for this purpose, as transparent vinyl is rare and difficult to source) sprayed from the back to produce stunning, dimensional shades of blue, yellow, green, and brown. The effect is that of a stained-glass window made vibrant by sunlight filtering through it. This body of work is not indifferent to the sun, but rather searches out its presence in media meant to function in its absence.

Positive and negative, black and white, silence and noise, sun and shelter from it: as Hildebrandt collects the memories of life saturated and shaped by audiovisual culture, his approach to form—here variously abstract, sculptural, found, designed—is informed as much by a search for the imperceptible shifts left in the wake of entertainment media as it is by such media’s actual material and affective fragments. The works in What Does the Sun Matter to Us activate a shared landscape of listener- and viewership, lingering with both cultural products and the odd shadows they cast. If Kracauer regarded the cinemagoers on Münzstraße as inattentive, passing time without thinking or feeling, Hildebrandt posits otherwise, placing himself in community with the many whose lives, deeply felt, are threaded through songs and stories on screen.