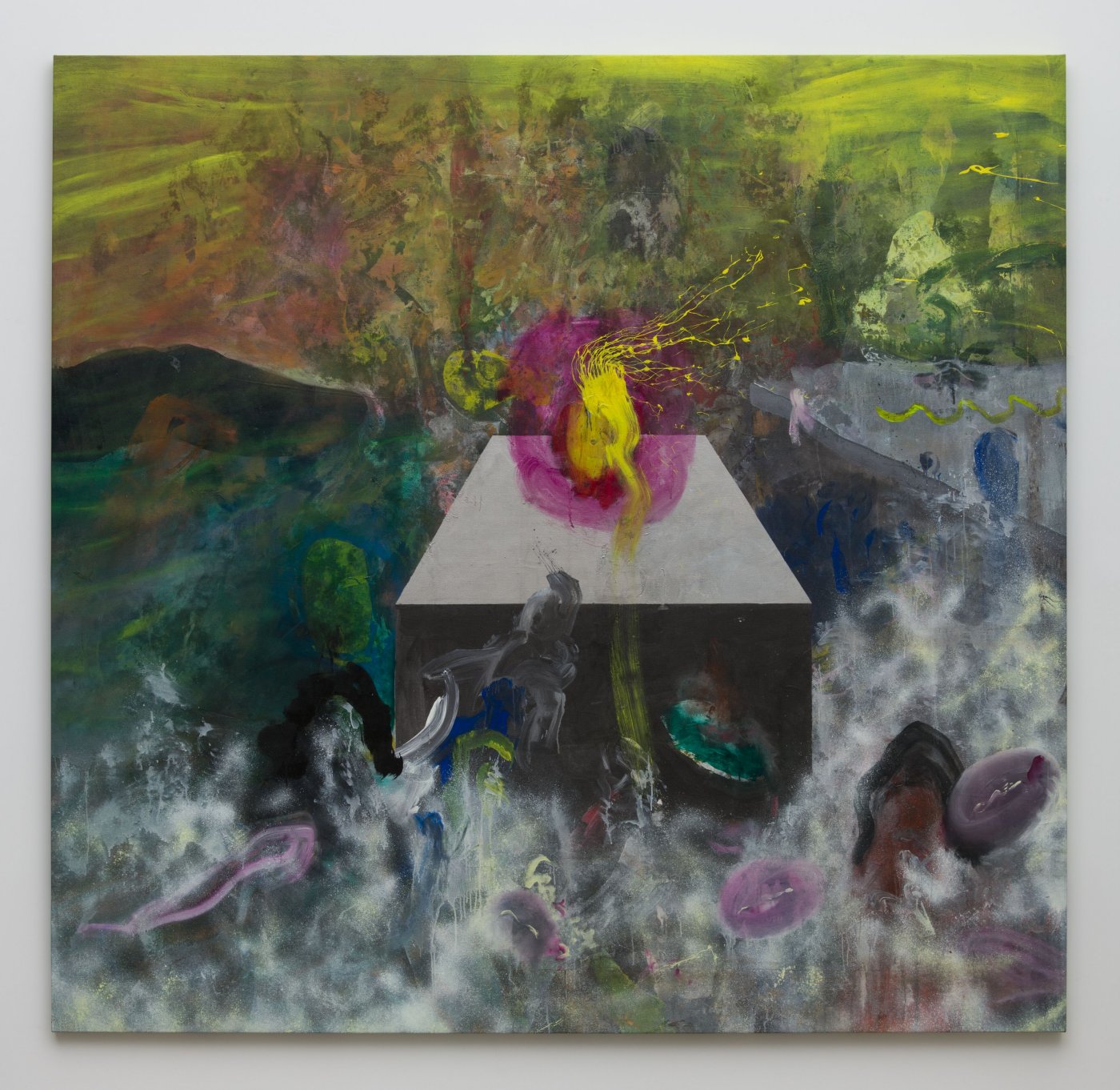 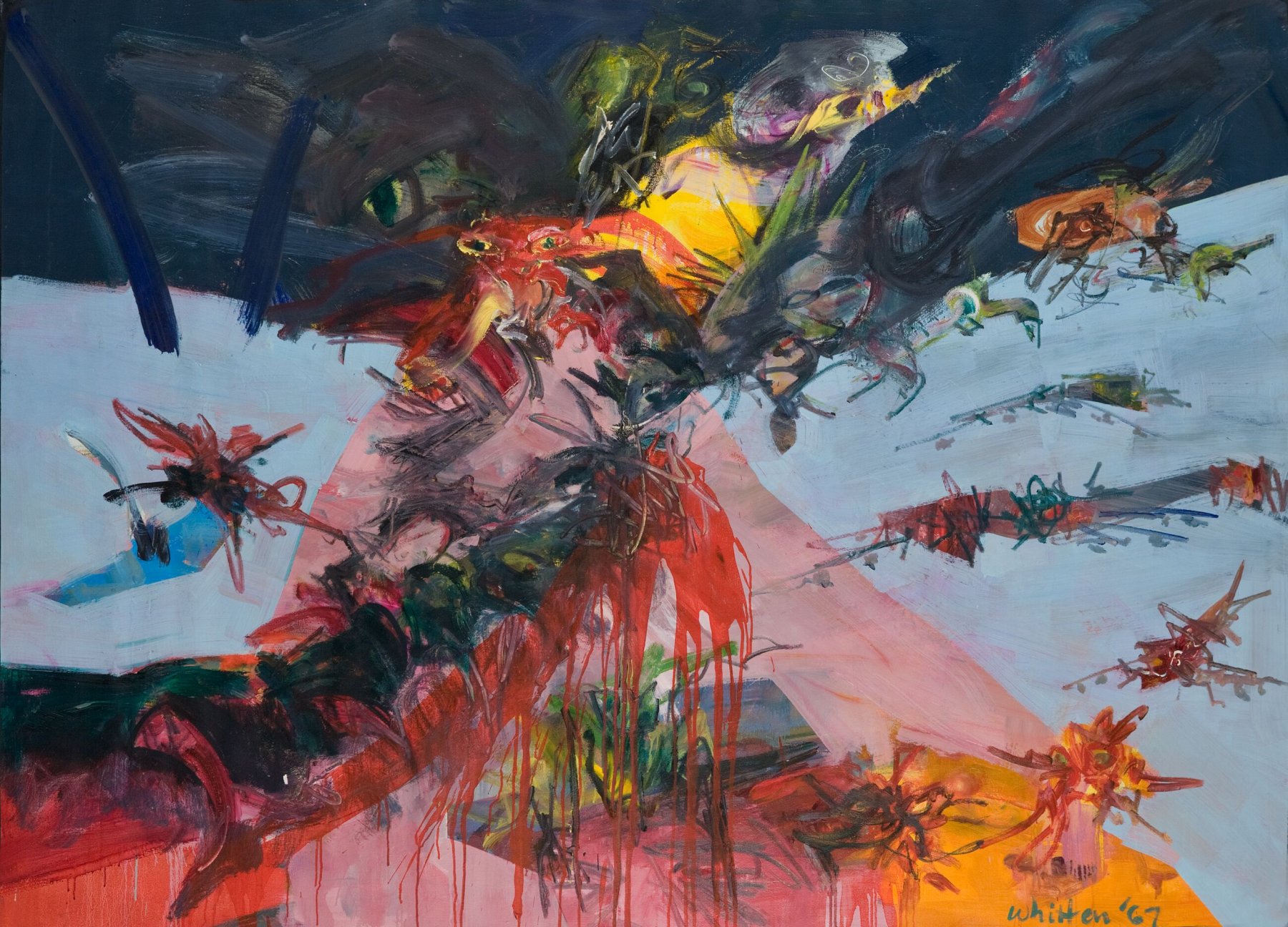 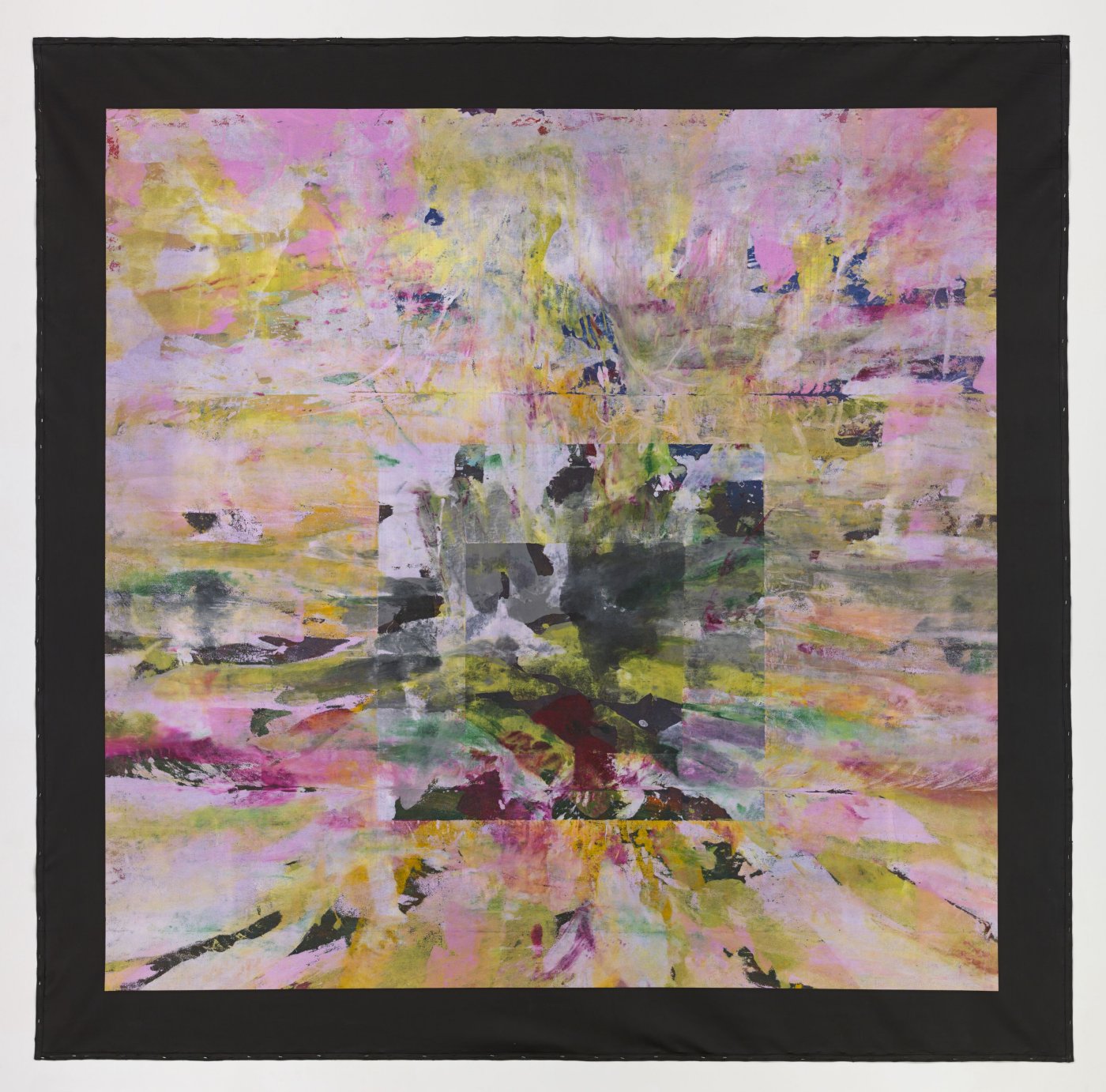 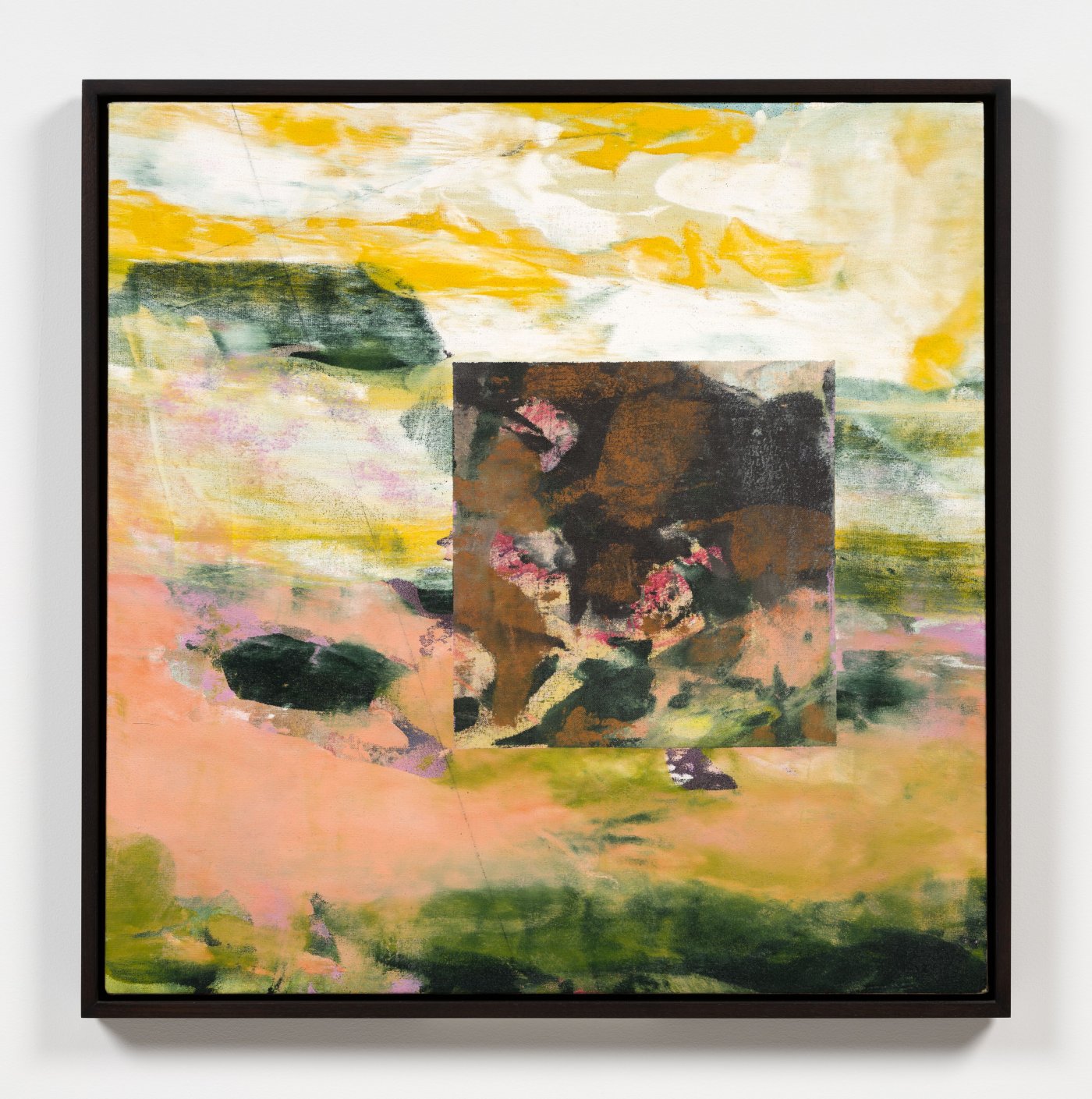 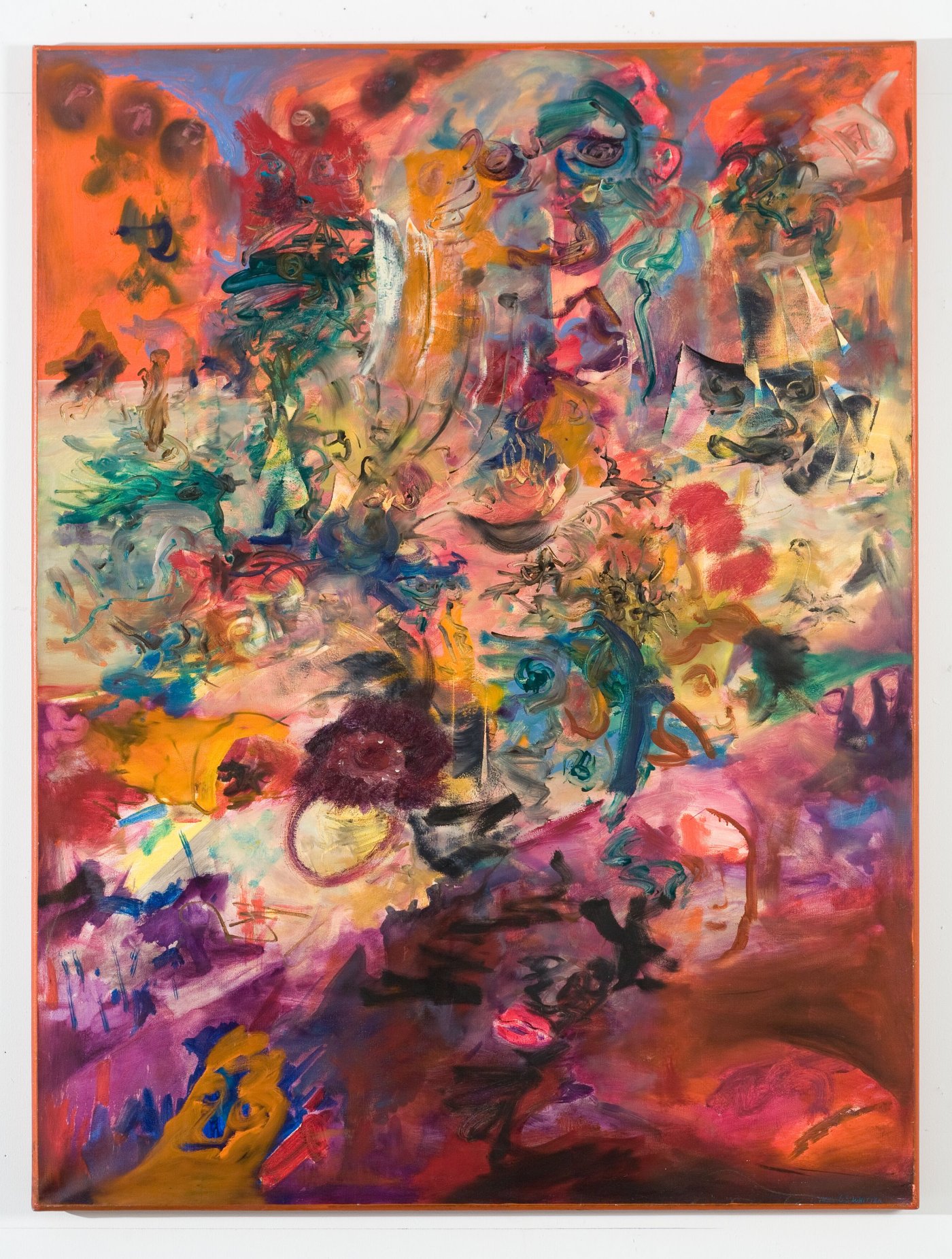 ‘Jack Whitten’ features paintings and works on paper created during the late 1960s, many of which have never been exhibited before. During this decade, Whitten bridged themes of gestural abstraction and process art to work toward a nuanced language of painting that employs deeply personal expression. A time of self-reflection and search for identity, Whitten asked himself in his studio logs from this period, ‘Who are you Jack Whitten? What kind of person do you want to be? What sort of world do you want?’. Following on from the presentation in Zurich, an exhibition dedicated to Whitten’s works from the 1970s will open at Dia Beacon in New York this November.

Jack Whitten, born in 1939 in Bessemer, Alabama, came to New York in 1960 to study at the Cooper Union. At the time, abstract expressionism dominated the art world; the work of Arshile Gorky, Willem de Kooning and Franz Kline was at the forefront of Whitten’s mind. Whitten lived amongst many creatives during this period and was able to meet New York artists, such as Philip Guston, Barnett Newman, Jacob Lawrence and Norman Lewis – many of whom would leave a long-lasting impression on the young artist. After graduating in 1964, he began creating colourful, gestural paintings in response to the abstract expressionist movement. The works on view present his inventive juxtaposition of abstraction with surreal figurative imagery.

Whitten’s artistic production of the late 1960s serves as a reflection of his experiences of living in a socially and creatively charged era, shaped by the events that constituted its tumultuous political landscape. Produced against a backdrop of struggle and hostility, from the Civil Rights protests to the Vietnam War, Whitten employed clashing colours, aggressive brush strokes and uncanny imagery in works such as ‘T.V. Space’ (1967), ‘Guardian Of The Field I’ (1967) and ‘Guardian Of The Field II’ (1968). The dark painted frames are reminiscent of television screens and the way in which people were increasingly watching violence unfold. The turbulent imagery also mirrored Whitten’s own mental conflict, and he confessed it was difficult to convince himself of the value of art whilst the war was going on. In ‘NY Battle Ground’ (1967), the painterly depiction of military aircraft and missiles allude to the turmoil that was witnessed through the media. A product of this intense period, the expressive mark-making and organic shapes of Whitten’s paintings reveal the strong and emotive presence of the artist’s hand.

As Whitten would demonstrate throughout his career, his instinct was to respond to his time and the sociopolitical climate that defined it. Amongst some of his first works to address memorialisation, ‘King’s Wish (Martin Luther’s Dream)’ (1968) and ‘USA Oracle (Assassination of M.L. King)’ (1968) pay homage to the activist Martin Luther King Jr, whom Whitten met in Montgomery in 1957, and the Civil Rights Movement. Combined with his experiences of growing up in the South and having adopted Martin Luther King Jr’s call for non-violence before arriving in New York, Whitten’s creative output was his attempt to make sense of the world and express his role within it.

This period of experimentation and the works that emerged from it led to an awakening by the end of the decade. ‘Satori’ (1969) derives its title from a Japanese Buddhist term for enlightenment and exhibits Whitten’s growing interest in geometries through the confluence of surreal landscapes and a hard-edge shape. Concluding this significant chapter of the artist’s constantly evolving practice, the painting’s distinctive style indicates Whitten’s success in forging his own path as an abstractionist. Despite the lack of institutional support that he received as a Black artist in New York, he remained committed to his painterly endeavours and effectively reconfigured the discipline of painting. As the artist stated, ‘Experimentation expands consciousness. When consciousness expands freedom expands.’

Hauser & Wirth at Zurich Art Weekend
Coinciding with this exhibition at Limmatstrasse, ‘Frank Bowling. Penumbral Light’ will display recent abstract paintings made by the artist mostly during the London lockdown in 2020. Whitten and Bowling were friends during Bowling’s time in New York in the 1960s and 70s, both at the forefront of abstract painting. At the gallery’s space at Bahnhofstrasse 1, ‘Facing Infinity. Alberto Giacometti & Pablo Picasso’, curated by Dr. Dieter Buchhart is on view until 27 August.