Maureen Paley presents the exhibition The Toxic Camera by Jane and Louise Wilson presented across the two London spaces. The Wilson twins have been working together for over 30 years. From early on their work often examined liminal zones of exclusion, abandoned military sites and buildings. Working within an expanded field of photography, their work has dealt both directly and indirectly with the ways populations and governments impact the environments we live in. This exhibition marks the 10-year anniversary of their film The Toxic Camera (2012). 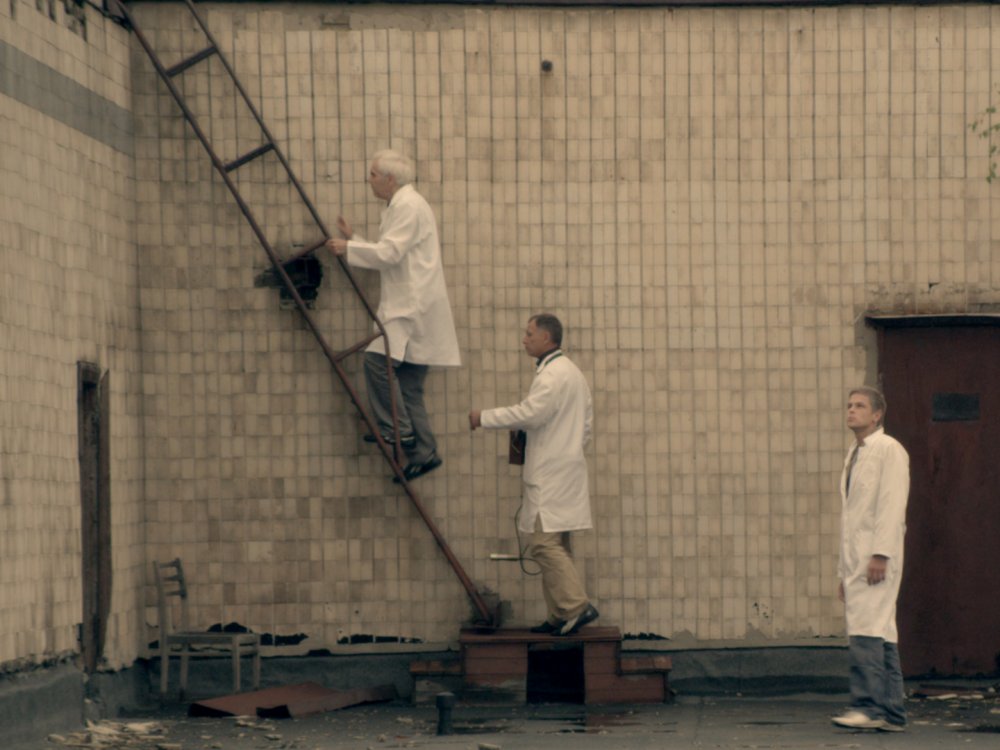 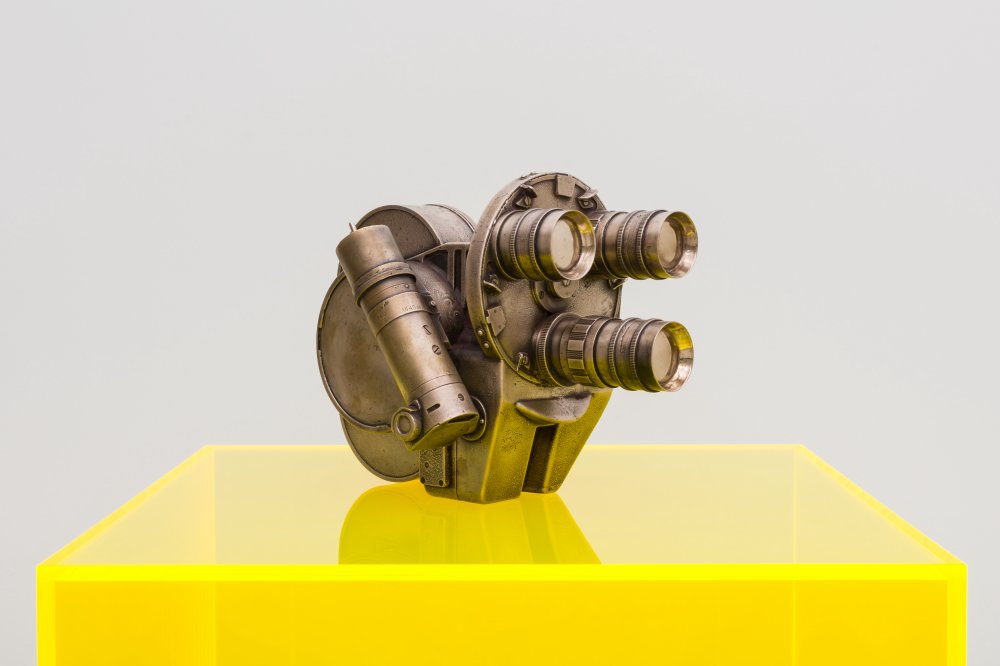 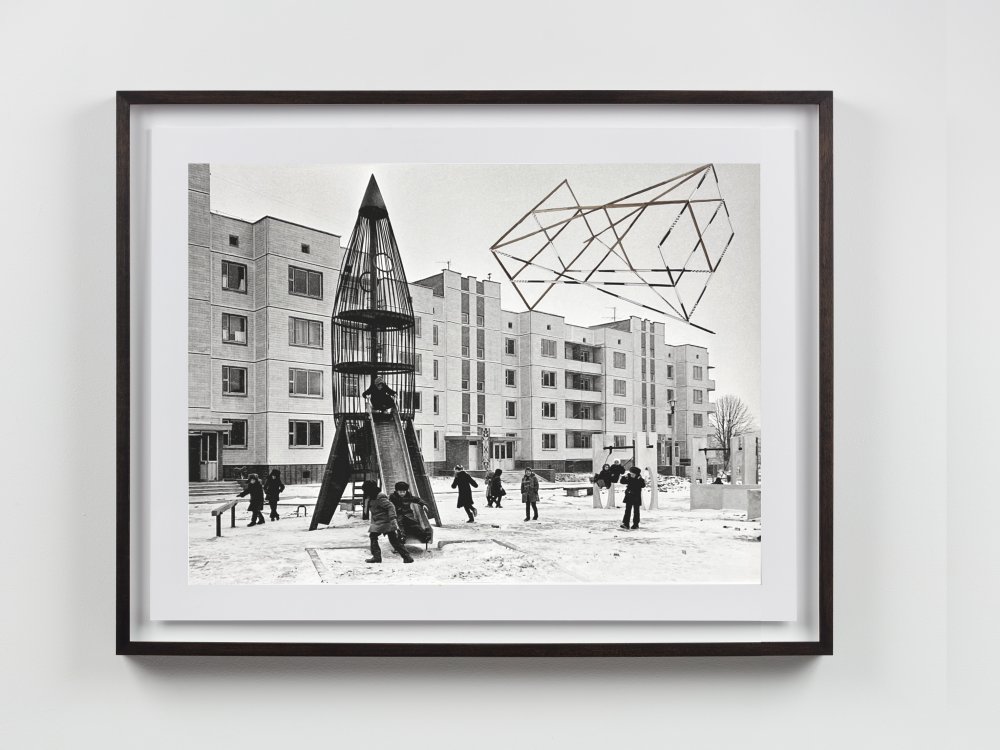 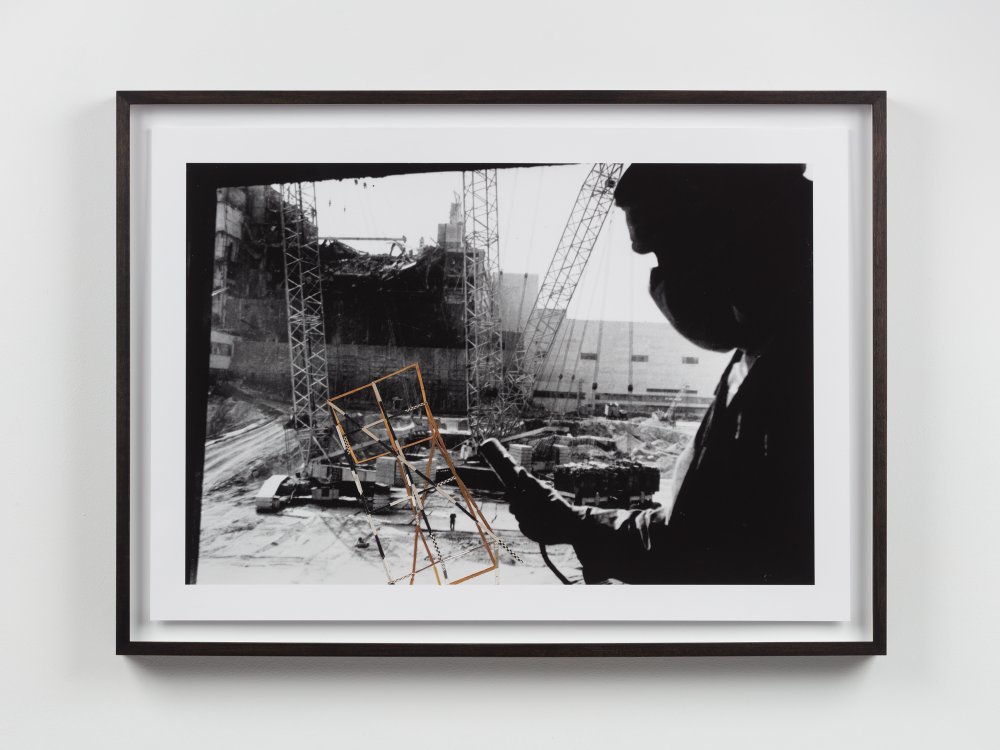 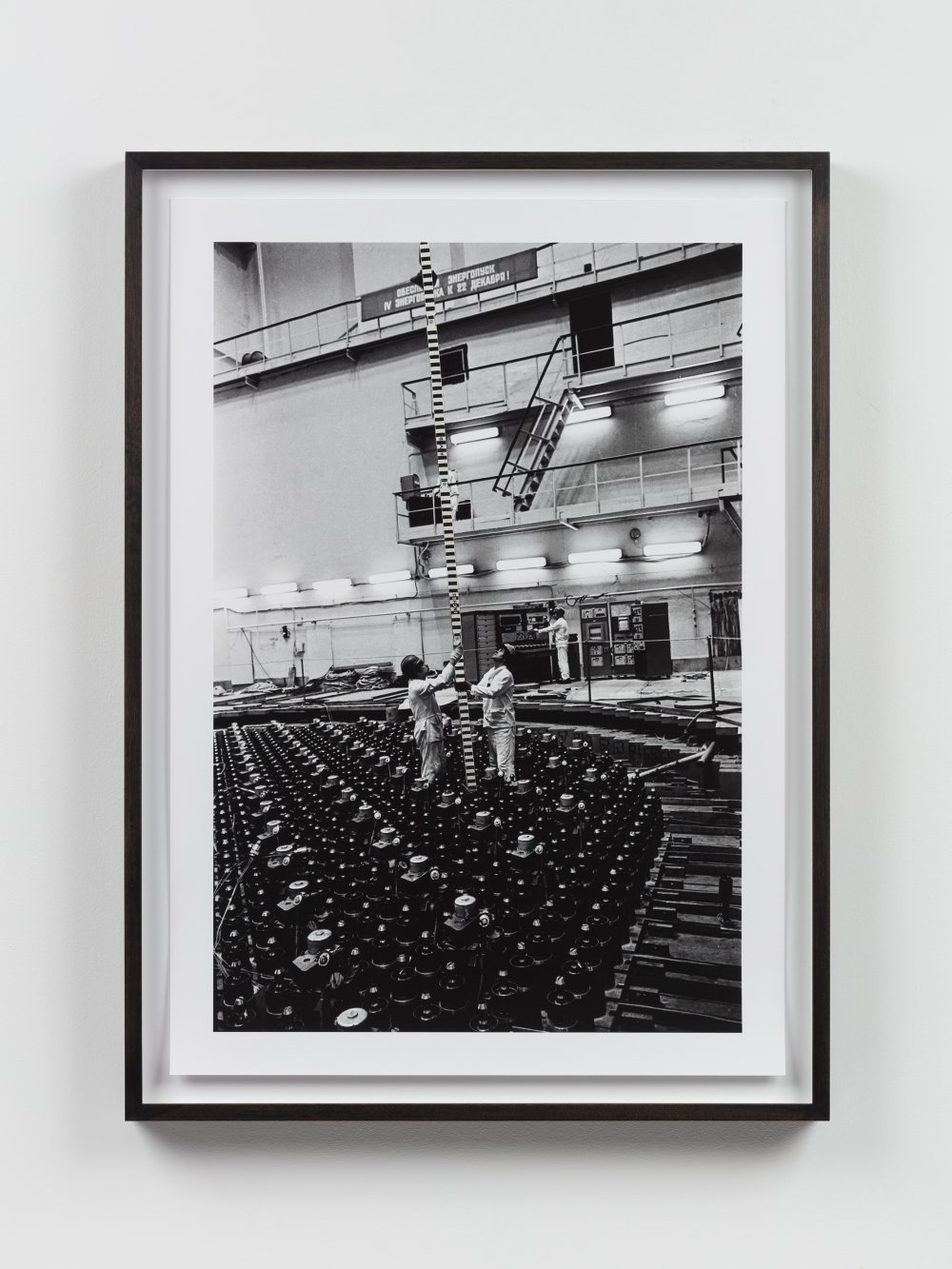 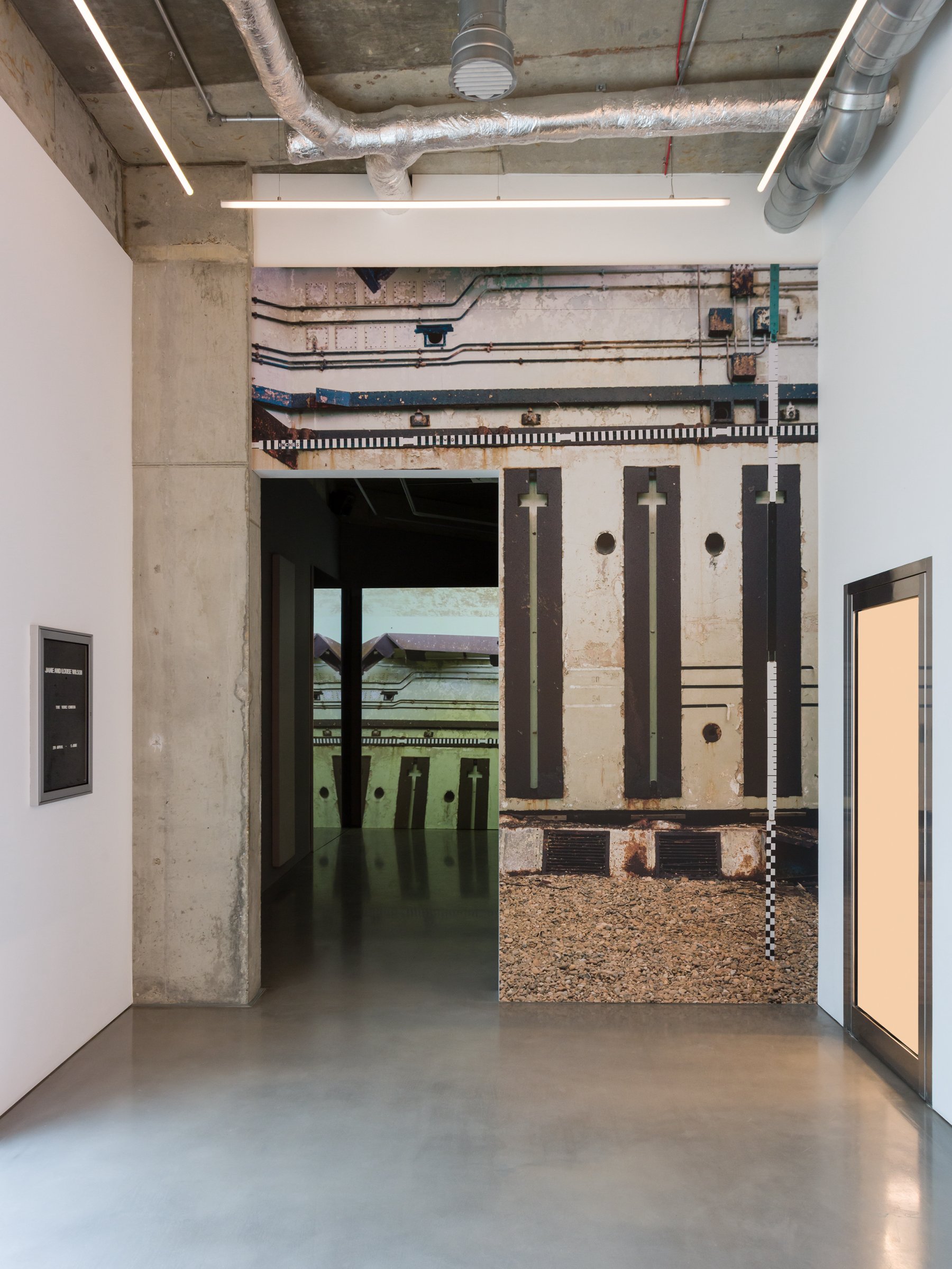 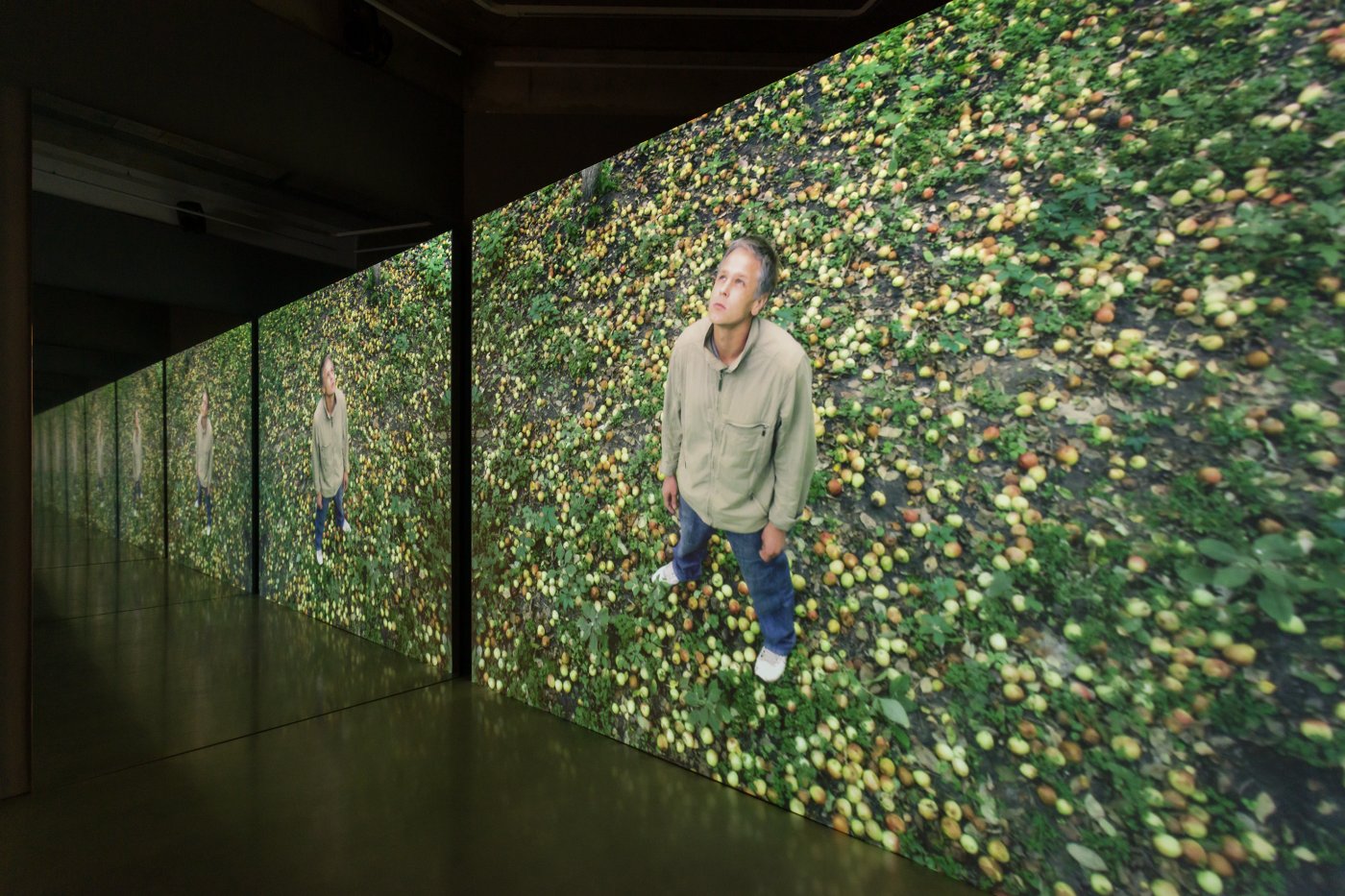 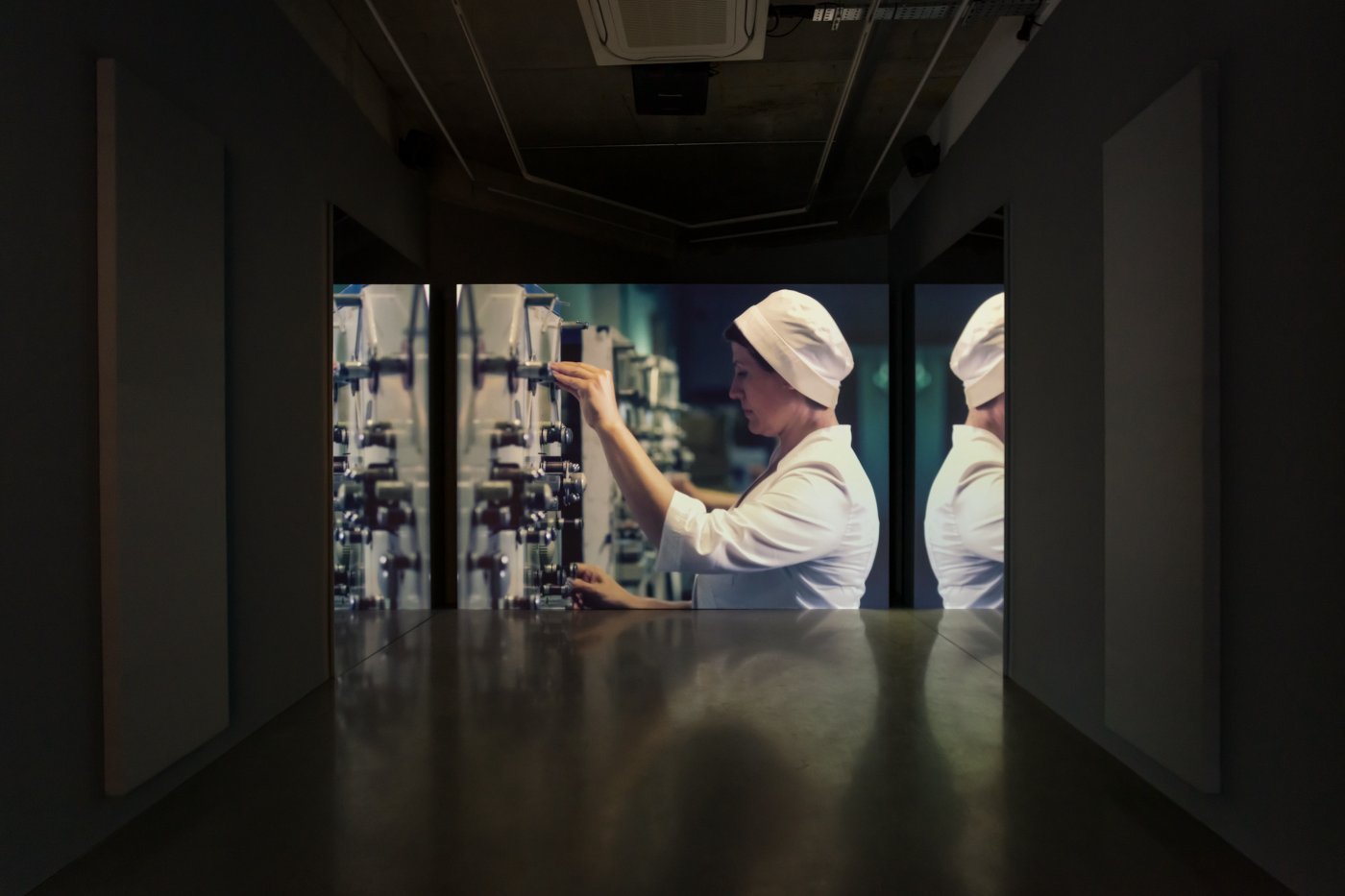 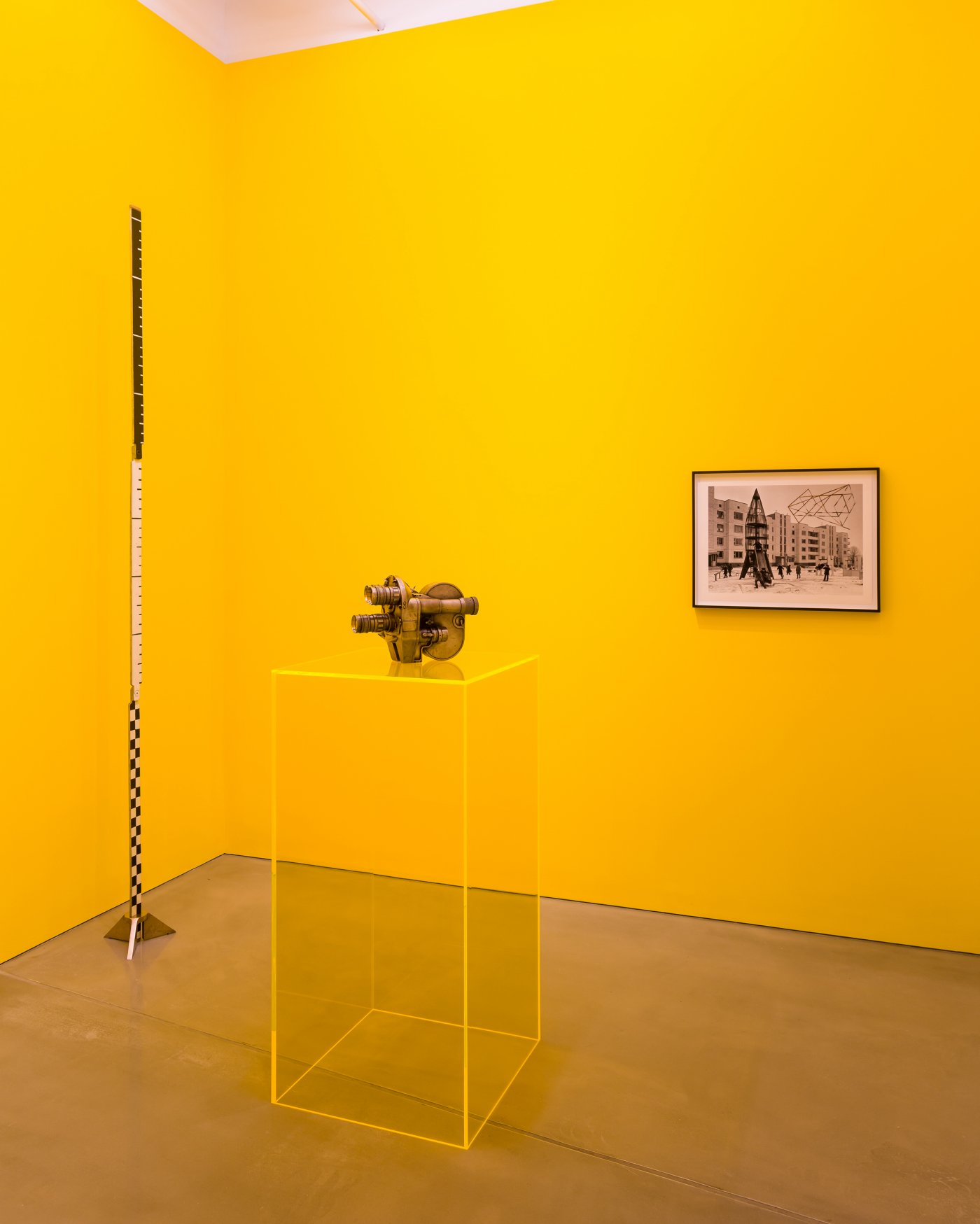 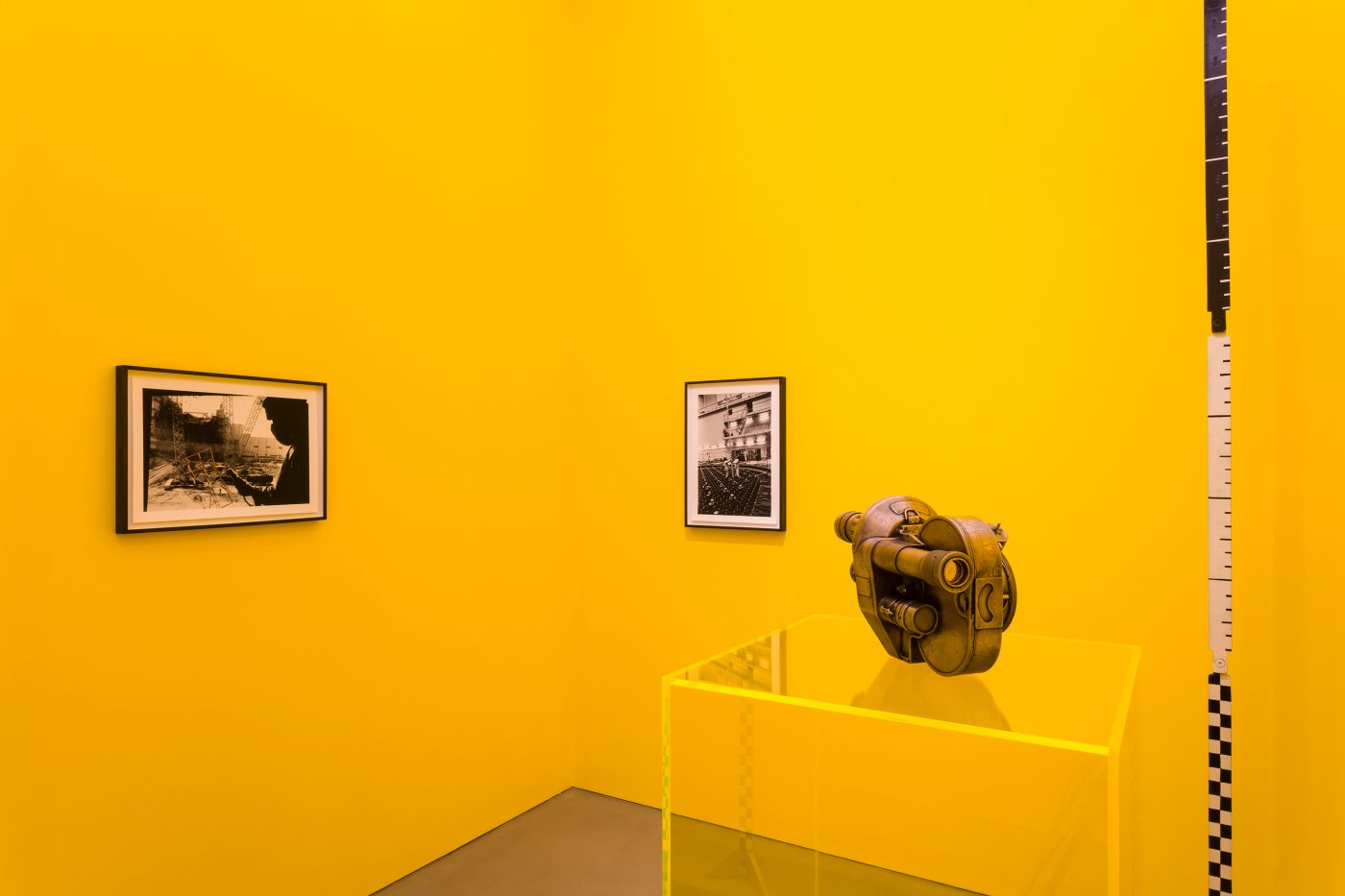 At Three Colts Lane, the film installation The Toxic Camera (2012) revisits the narrative of the Ukrainian filmmaker Vladimir Shevchenko’s Konvas Avtomat: the Russian 16mm camera he had used to document the clean-up operation in the immediate aftermath of the Chernobyl nuclear meltdown in 1986. One of the most significant ecological catastrophes humankind has ever seen, Chernobyl is also one the greatest nuclear disasters to date, followed years after by the explosion at the Fukushima nuclear power plant in Japan in 2011.

“On 24 February 2022, the world watched as the Russian Federation invaded Ukraine. Having been fortunate to work in Ukraine 2010–2012 before the Orange Revolution, we stand in solidarity with the people of Ukraine in support of their right to be a sovereign, self-governing state and with those Russian citizens taking a stand against the war. The people of Ukraine are now facing a huge humanitarian crisis in the wake of the Russian Federation’s devastating invasion. Once again on 25 February, radiation spikes were reported from the Chernobyl nuclear power plant as Russian military vehicles entered the exclusion zone and disturbed the radioactively contaminated topsoil surrounding Chernobyl.

By approaching history from an oblique angle, the film explores narrative through the perspective of Shevchenko’s camera, which not only documents sites in transition, but becomes a meditation upon sensing the invisible and the impact of the unseen. ‘The Toxic Camera’ was filmed on location in the National Cinematheque of Ukraine ‘KyivNaukFilm’, at the Radioactive Waste Storage Facility in Pyrohiv just outside of Kyiv, and in Orford Ness, a former H-bomb test facility that had once been owned by the Ministry of Defense off the Suffolk coast in the U.K. We worked with two writers to develop the script and voice over based on the research and interviews we had made in Kyiv in 2010 and 2012. The script was adapted by the writer Tony White and research and script contributions were made by the researcher and artist Dr. Susan Schuppli.

The film looks at the site of where Schevchenko’s Konvas Avtomat camera was buried just outside Kyiv in 1989, two years after he had documented the Chernobyl clean-up operation in 1986 in his film ‘Chernobyl Chronicle of Difficult Weeks’ (1987). Shevchenko died from exposure to an excessive dose of radiation less than a year after completing his film. ‘Chernobyl Chronicle of Difficult Weeks’ was suppressed by the Soviet Authorities for six months and was finally released not in Moscow, but at the Tbilisi Film Festival in Georgia, two months after Shevchenko’s death. The Russian press at the time said that the film was contaminated by radioactive particles, which showed up on the screen as ‘the visible face of radiation.’ The Tbilisi Film Festival said that Shevchenko was an ‘outstanding man, who gave his life so that we and our descendants could see with our own eyes all the horror and depth of the Chernobyl tragedy.’

Initially we worked with the British Council in Ukraine and Olga Bryukhovetska, a lecturer (Visual Culture Research Center, National University of Kyiv-Mohyla Academy) who introduced us to Sergii Mirnyi. Sergii had been a young conscript in the military and was one of the liquidators, the ‘liquidators’ describes the workers who entered areas designated as ’contaminated’ between 1986 and 1989 to help reduce the consequences of the nuclear explosion, to stand up against ‘the invisible enemy.’

Our fascination with Shevchenko’s camera is that by capturing the effects of radiation directly onto his film stock, it not only documented the aftermath of an event but during the process became an actual event. ’The Toxic Camera’ reflects upon the environmental impact of radiation on the vulnerable nature of the landscape and the human body being irretrievably damaged.

On the 31st of March 2022, the Russian army pulled out of the Chernobyl Exclusion Zone. The invasion has left marks that will take a long time to heal. The retreating Russian forces reportedly stole essential advanced radio-ecological monitoring equipment and servers, hard drives, and various records, effectively undoing almost a decade of scientific research. According to new satellite imagery, during the occupation of the Chernobyl nuclear site, Russia stationed troops in an area of high radioactive contamination. This decision raises the possibility that Russia knowingly exposed its troops and persons beyond to potentially unhealthy levels of radioactivity during its occupation of the now defunct nuclear facility.

‘The Toxic Camera’, 2012 acts as a metaphor for the vulnerable nature of the landscape and the human body, both irretrievably damaged from exposure to radiation from Chernobyl. The Ukrainian filmmaker Vladimir Schevchenko died as the result of excessive exposure to radiation less than a year after completing his film ‘Chernobyl : A Chronicle of Difficult Weeks’. The Russian press at the time said that the film was contaminated by radioactive particles, which showed up on the screen as ″the visible face of radiation.’’ During this time his film camera the Russian konvas avtomat became so irradiated that it had to be removed from the film school where he worked and buried outside Kyiv in the nuclear waste facility in Pyrohiv. We present a replica of it here in tribute to Schevchenko’s bravery and in memory of his courageous act to film this disaster.” – Jane and Louise Wilson, 2022

Alongside The Toxic Camera, Jane and Louise Wilson will present Konvas Avtomat, The Toxic Camera (2012), a bronze cast edition and replica of Shevchenko’s 16mm film camera and a series of collages entitled Imperial Measure that use the recurring motif of a yardstick placed within each of the images. These collages are based on archive images of the once thriving community that lived and worked within the Chernobyl exclusion zone. The photographs encourage us to stare back into the past through empty manmade spaces, while the yardsticks (relating to an imperial standard of measurement now fallen into disuse, much like the buildings themselves) play with notions of association, interpretation, memory, material fact, and that which is recorded, measured, articulated, and analysed. Hinting towards the historic relevance of the ‘future ruin’ and manifesting an Imperialist past in the present, the measures point to the architecture of forensics and camouflage, as well as the obsolete.

At Studio M, works from their most recent photographic series continue their exploration of the fragile interaction between human and natural environments, from the ‘wedded rocks’ of Futamigaura, Japan to the lava stones in Jeju, South Korea.

During their research for The Toxic Camera in Kyiv in 2011, the Fukushima Daiichi nuclear disaster incident occurred, caused by a tsunami following an earthquake. Despite the many earlier studies which had highlighted the risks of building a coastal nuclear power station in Japan, as with Chernobyl, there was a false belief in the state’s ‘technological infallibility.’ In 2021, the Catholic bishops of Japan and Korea voiced their opposition to the plan to release the contaminated water from the cooling systems into the Pacific Ocean, citing opposition by fisheries, local prefecture councils, and the governor of Jeju Province. The storage tanks used to store the water from the power plant are expected to be filled by this summer 2022.

In 2018, they spent three months working and living on Gapado Island, part of Jeju Province, South Korea, situated in the South China sea. Gapado is a tiny Carbon-Free Island with 170 residents, dedicated to maintaining a ‘sustainable ecosystem’. The island is home to the Haenyo female free divers who, much like the Amu in Japan, work collectively together to make their living from a sustainable practice of fishing.

“We were fascinated by the Haenyo. Their way of working exemplifies their sister-like bond; when they’re together, they’re sharing everything. Because of the danger inherent in free-diving and the ever-changing expansion and improvement of women’s roles in the workplace, this tradition is effectively dying out and in jeopardy but there’s still a lot to be gained from their approach to sustainably harvesting their environment.” – Jane and Louise Wilson, 2022

In 2019, they also spent time on a British Council residency in Ise City, Japan: another protected site and home to Japan’s most sacred Shinto shrine. The photographic works in I’d Walk With You But Not With Her (2021) arise from both these residencies, working with the architecture of the rocks and shrines in Korea and Japan to layer together images that sit in dialogue with the abandoned sites of the Chernobyl exclusion zone included in the works at Three Colts Lane. Across both sites, the exhibition explores states of consciousness and phenomenological associations with specific locations.

A portion of sales generated from this exhibition will be donated to humanitarian aid for Ukraine.

Jane and Louise Wilson, RA (born 1967, Newcastle, UK) live and work in London. They were joint coordinators for the 252nd Royal Academy Summer Exhibition and in 1999 they were nominated for The Turner Prize for their multi-screen installation Gamma.