John Chamberlain (1927 – 2011) was a quintessentially American artist, channelling the innovative power of the post-war years into a relentlessly inventive practice spanning six decades. Hauser & Wirth hosts its first exhibition of the artist’s work in Switzerland. ‘John Chamberlain. Reclaimed’ presents a selection of five late sculptures forged from the bodies of mid-century cars that were salvaged from Kaudorf, Bern. 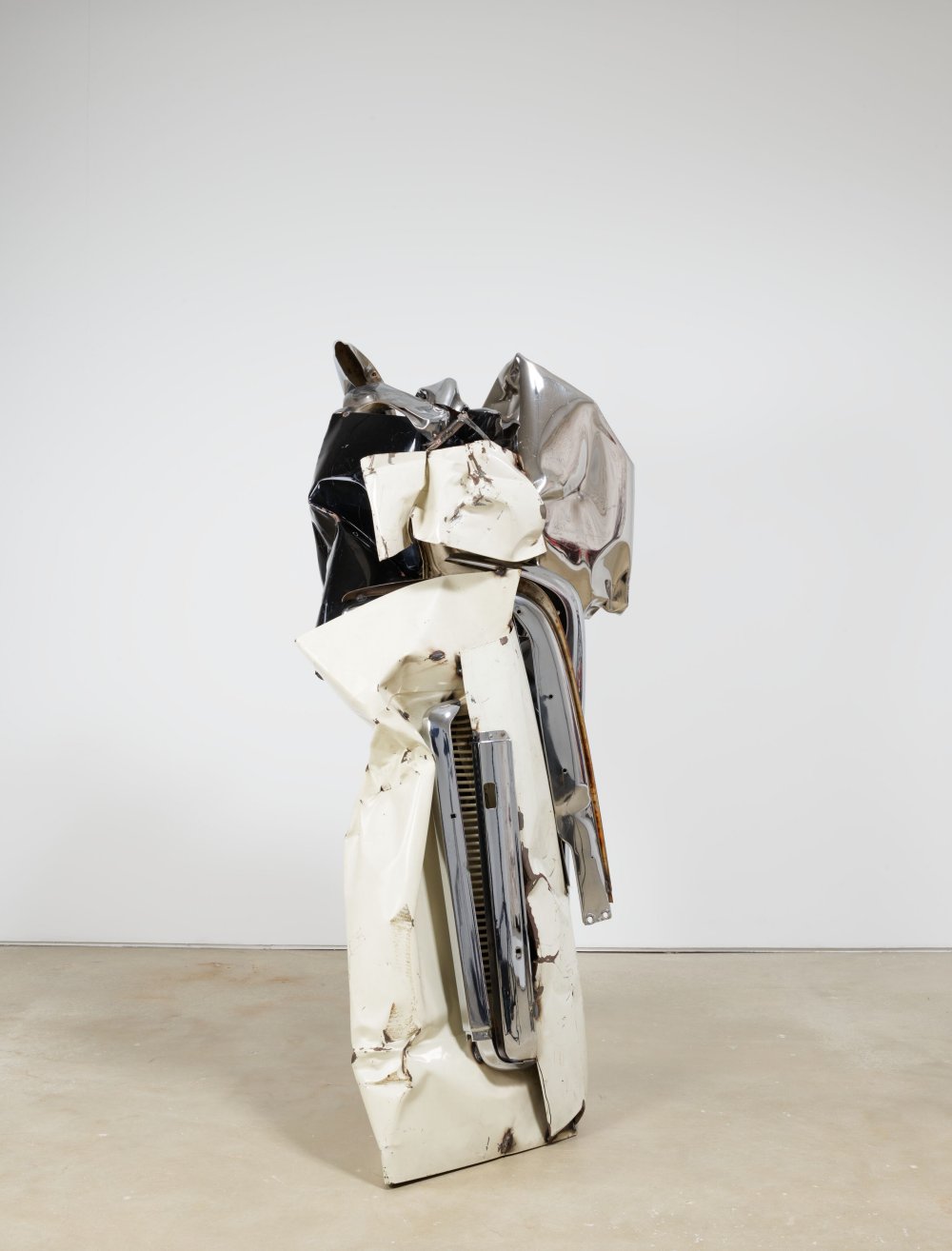 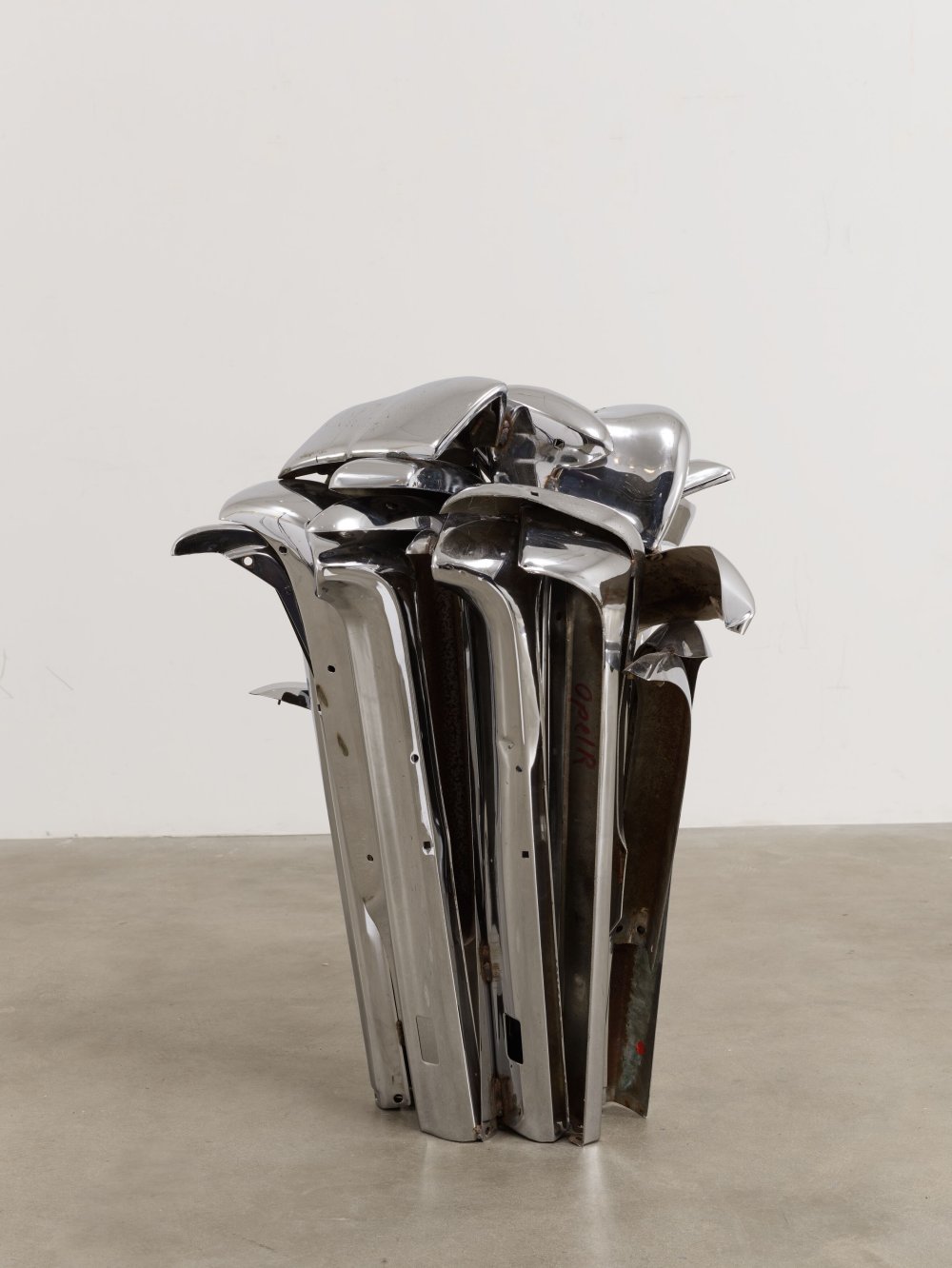 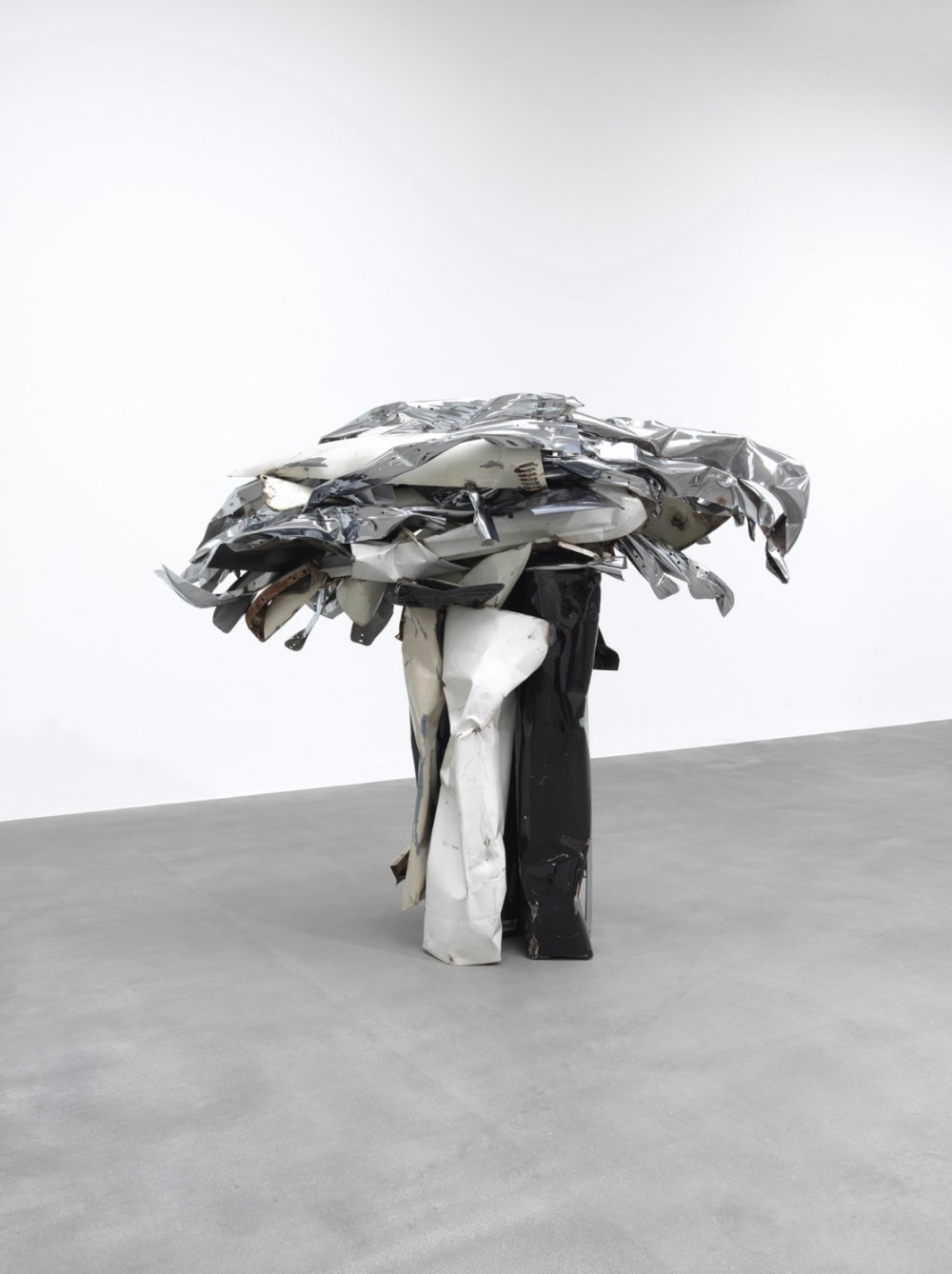 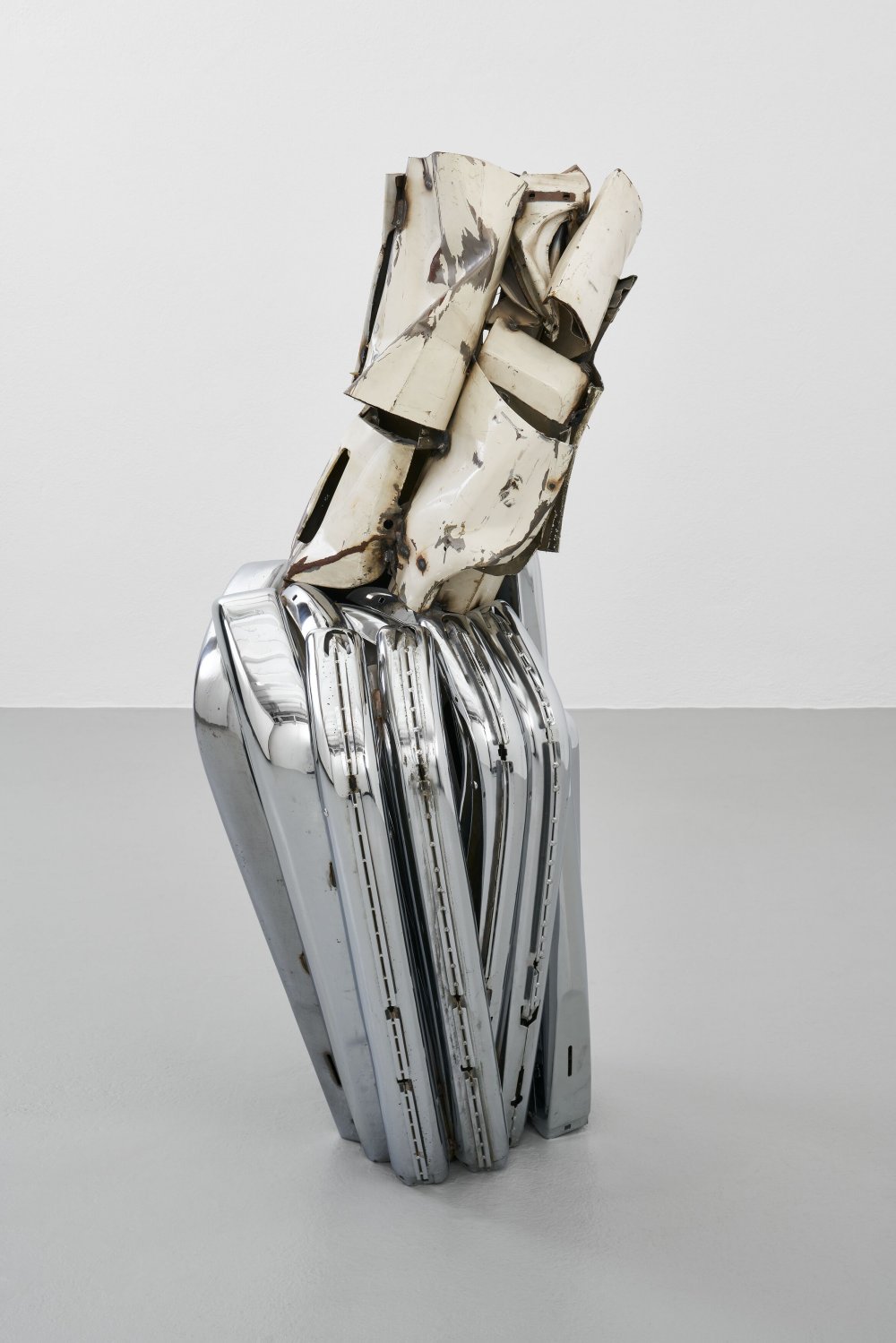 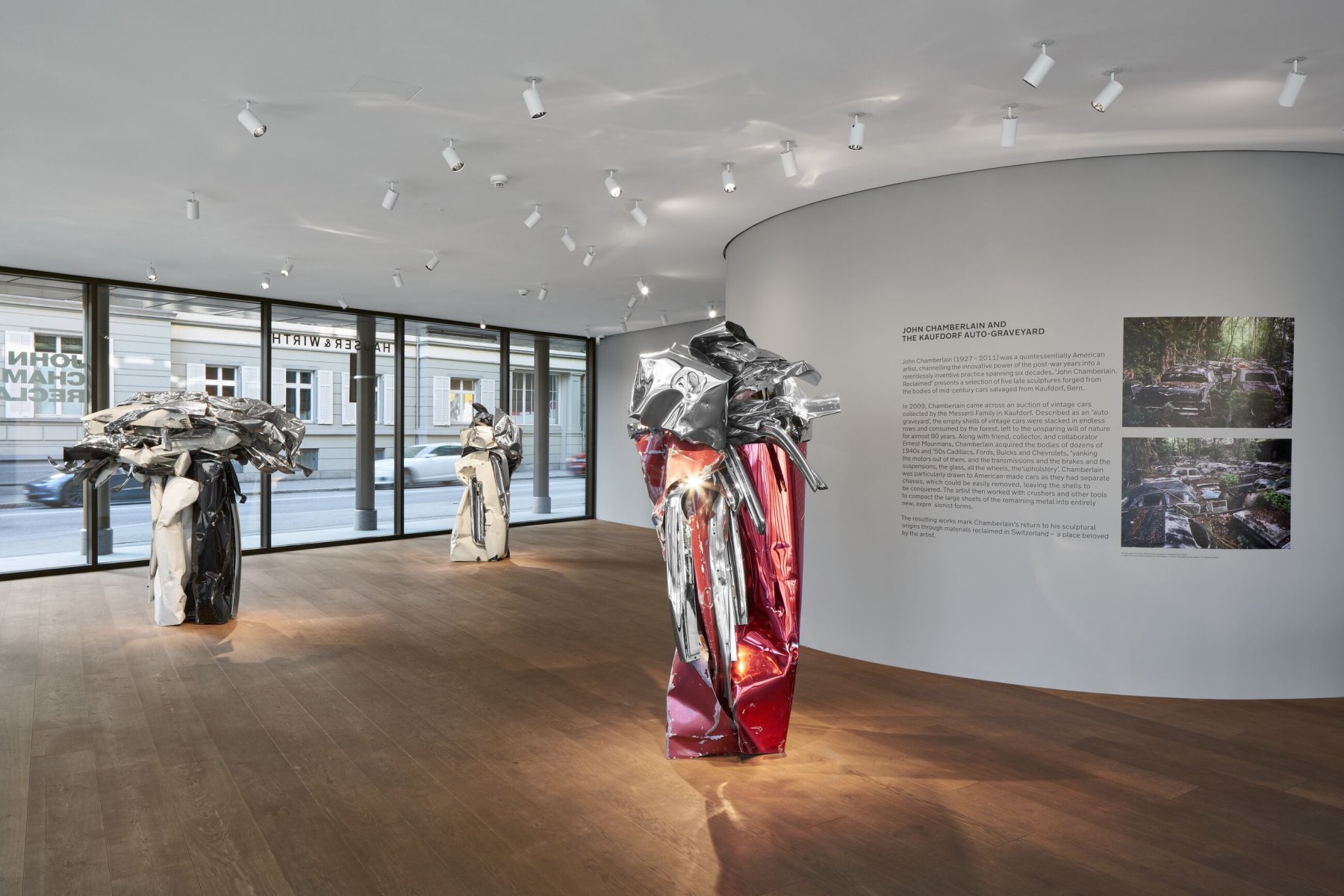 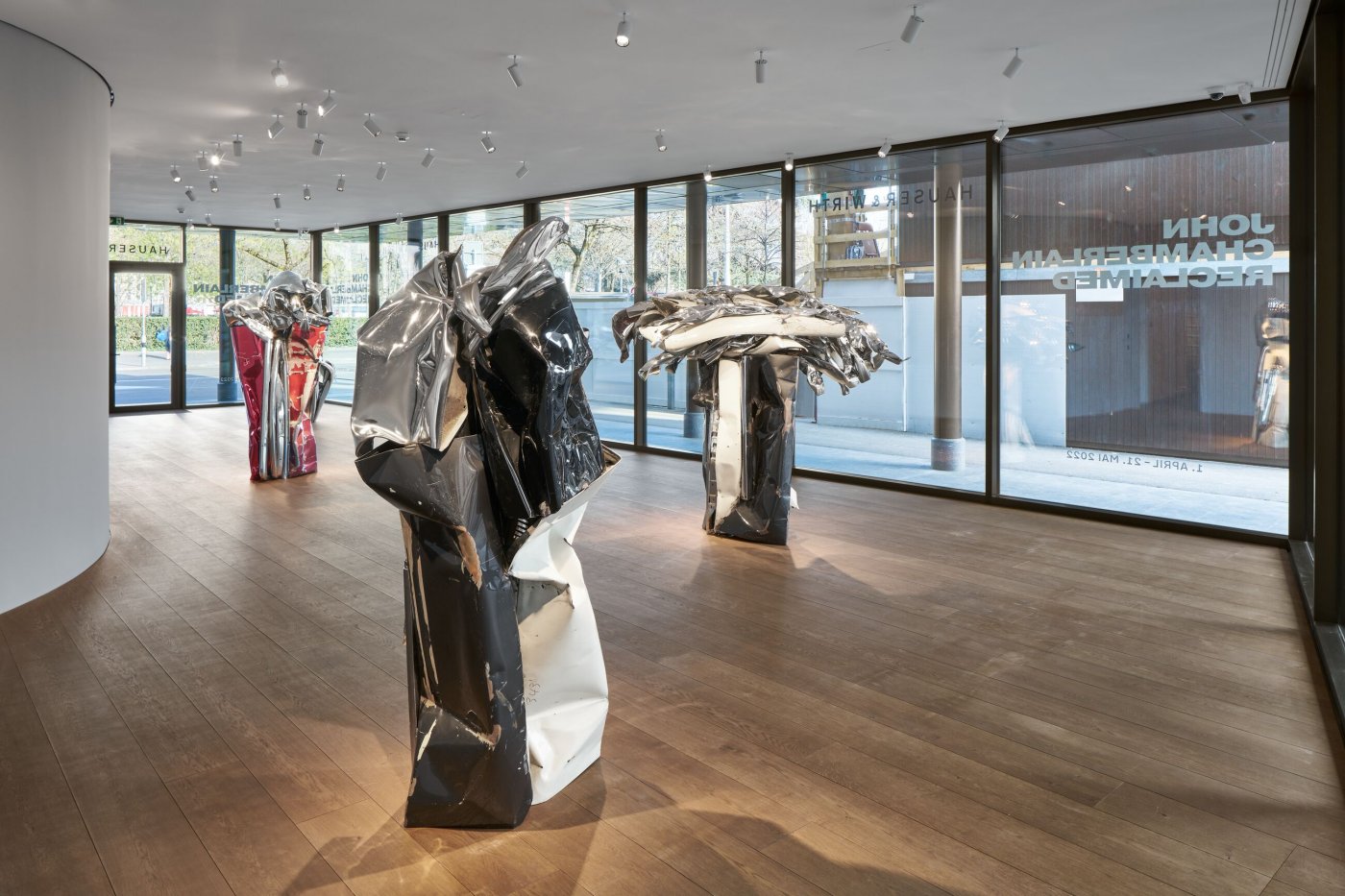 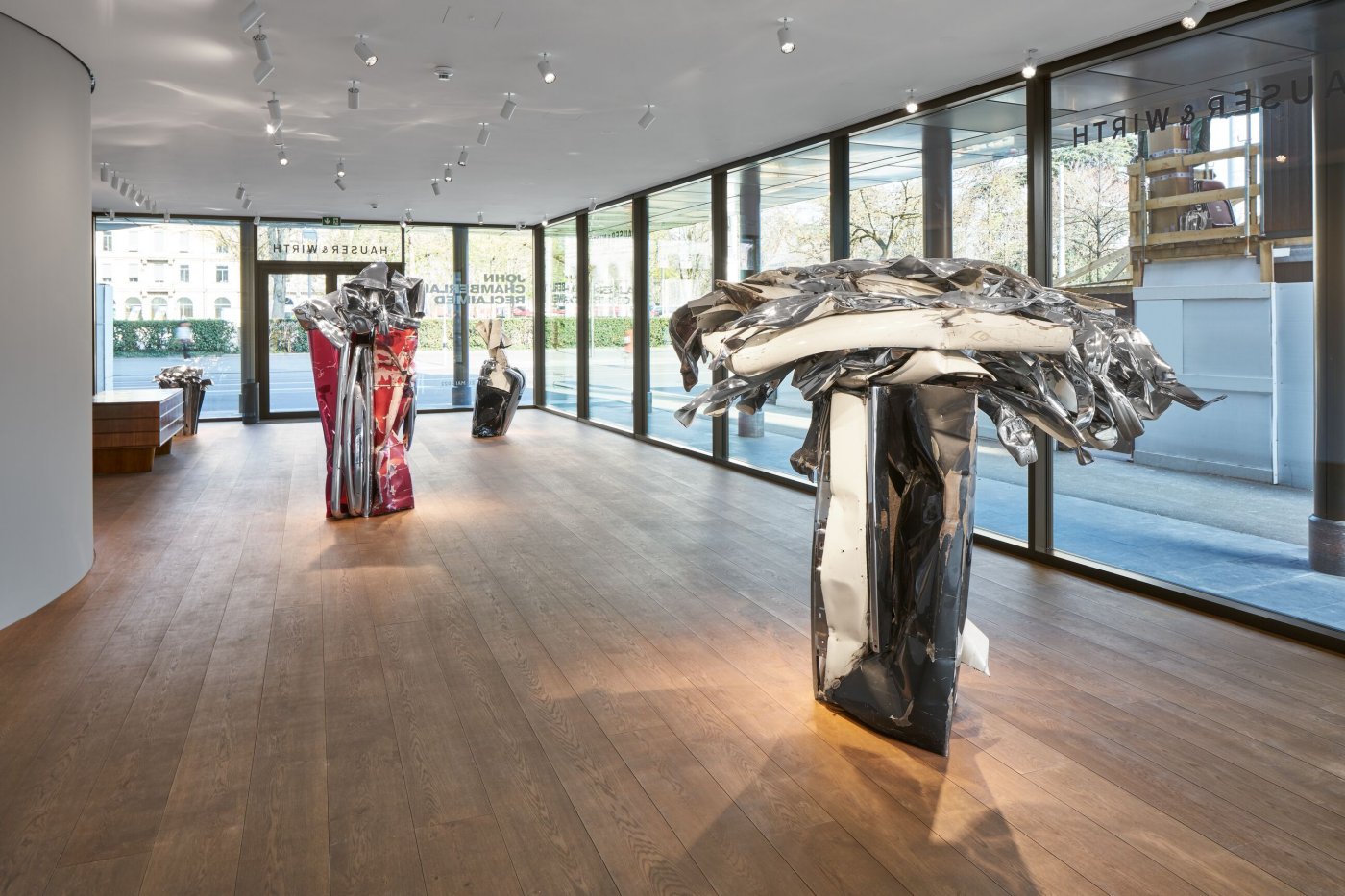 These vintage Cadillacs, Fords, Buicks and Chevrolets bear the chromatic imprint of the era. In primarily black, white, and silver, Chamberlain returns to his sculptural origins through employing the repurposed materials of a historic and treasured destination.

In 2009, Chamberlain came across an auction of vintage cars collected by the Messerli family in Kaufdorf, Bern. Described as an ‘auto graveyard’, the empty shells of vintage cars were stacked in endless rows and consumed by the forest, left to the unsparing will of nature for almost 80 years. Along with friend, collector, and collaborator Ernest Mourmans, Chamberlain acquired the bodies of dozens of 1940s and ’50s automobiles, ‘yanking motors out of them, and the transmissions and the brakes and the suspensions, the glass, all the wheels, the upholstery’. Chamberlain was particularly drawn to American-made cars as they had separate chassis, which could be easily removed, leaving the shells to be conquered. The artist then worked with crushers and other tools to compact the large sheets of the remaining metal into entirely new, expressionist forms.

Chamberlain first gained renown for his sculptures constructed from automobile scrap metal in the late 1950s and 1960s. These were ground-breaking works that effectively transformed the gestural energy of abstract expressionist painting into three dimensions. Beginning in the 1970s, he began to experiment with an array of other found materials such as foam rubber, Plexiglas, paper bags and aluminium foil. These playful explorations often informed his work with automotive scrap metal—his ideal ‘art supply’—which continued throughout his career. The late works on view in Zurich explore the formal and full expressive potential of this once abandoned industrial material. While some series of works employed metals which were augmented with colour and pattern by Chamberlain, this series derives its palette entirely from the original paint finish applied to the metals from these mid-century cars.

Welding bumpers and fenders around and within the crushed structures of metal, Chamberlain boldly challenges all notions of balance, colour, form, and volume. Works such as ‘BISHOPBUDD’ (2009) defy gravity as a crown of black, white and chrome strips sits atop a dense trunk of painted steel. ‘EMPIREMICROPHONE’ (2009) features the curvilinear forms of bumpers in bold contrast to the crumpled, timeworn steel balanced above. By employing a limited colour palette of black and white punctuated with reflective chrome, Chamberlain renders the density of steel into something that is seemingly weightless and fluid, elegant and powerful.

Standing within the monochromatic forest of sculptures, ‘ENTIRELYFEARLESS’ (2009) preserves the original red paintwork of the automobile from which it was welded. Demonstrating the artist’s skilled ability to balance colour and texture, this work echoes his belief that sculpture denotes a great deal of physicality, disrupting whatever space it occupies. Chamberlain worked in the round; from every perspective, the sculptures on view propose a new composition as the viewer explores each eccentric fold, twist and curl of steel. The mindful placement of the crushed car parts result in impossibly dynamic works that transform their original functionality into new and intriguing forms while establishing a pop art vernacular through the artist’s use of the ready-made.

Chamberlain’s daughter Alexandra Fairweather once shared a memory of their time in Switzerland: ‘Chamberlain and I were having coffee in Zurich and as a journalist was interviewing him, he mentioned how he was the ﬁrst ‘recyclist.’ And after thinking about all of those automobiles, left to deteriorate in those ﬁelds… I realized he absolutely was in many respects a ‘recyclist.’’