Judy Rifka: A Glance Through The Rearview Mirror. An Assessment of Her Formidable Art: 1974 - Present

Judy Rifka: A Glance Through The Rearview Mirror. An Assessment of Her Formidable Art: 1974 - Present

A Glance through the Rearview Mirror marks the first retrospective of Judy Rifka’s five decade long career in Europe. The exhibition presents paintings spanning the artists entire career from 1974 until today. 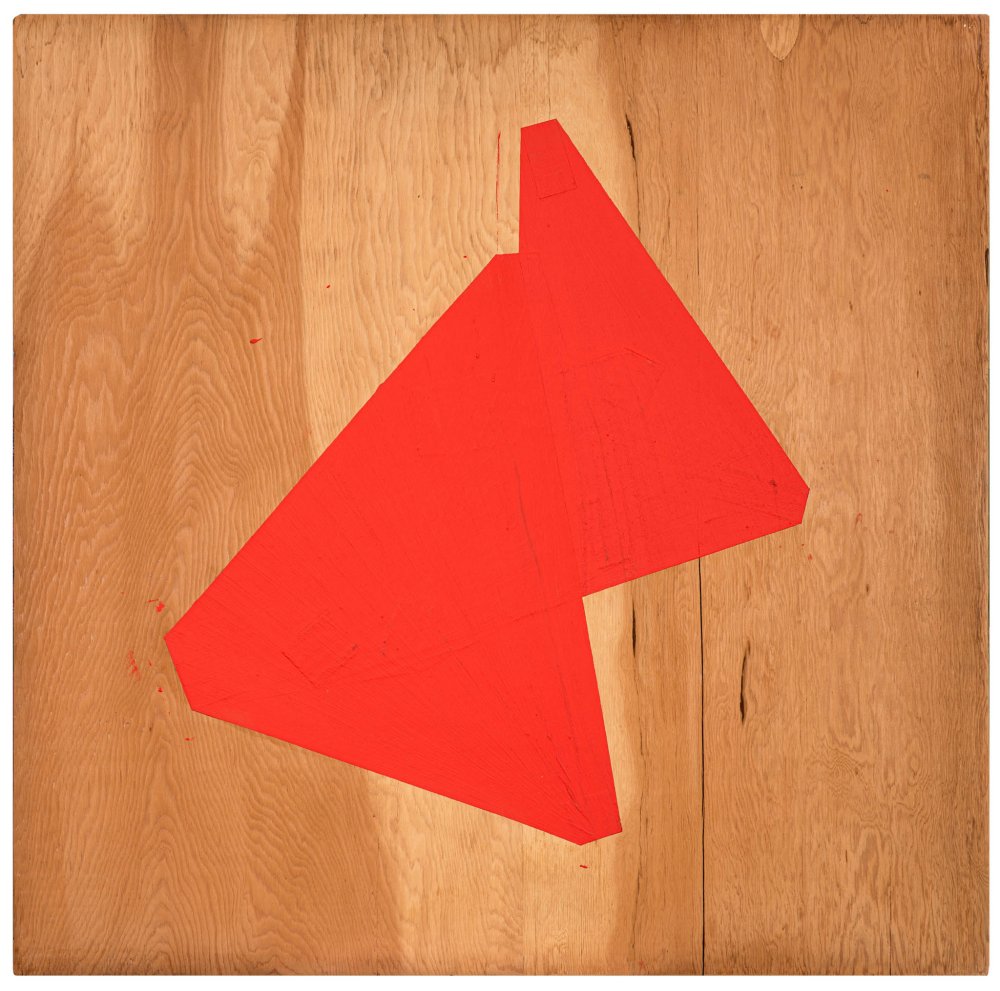 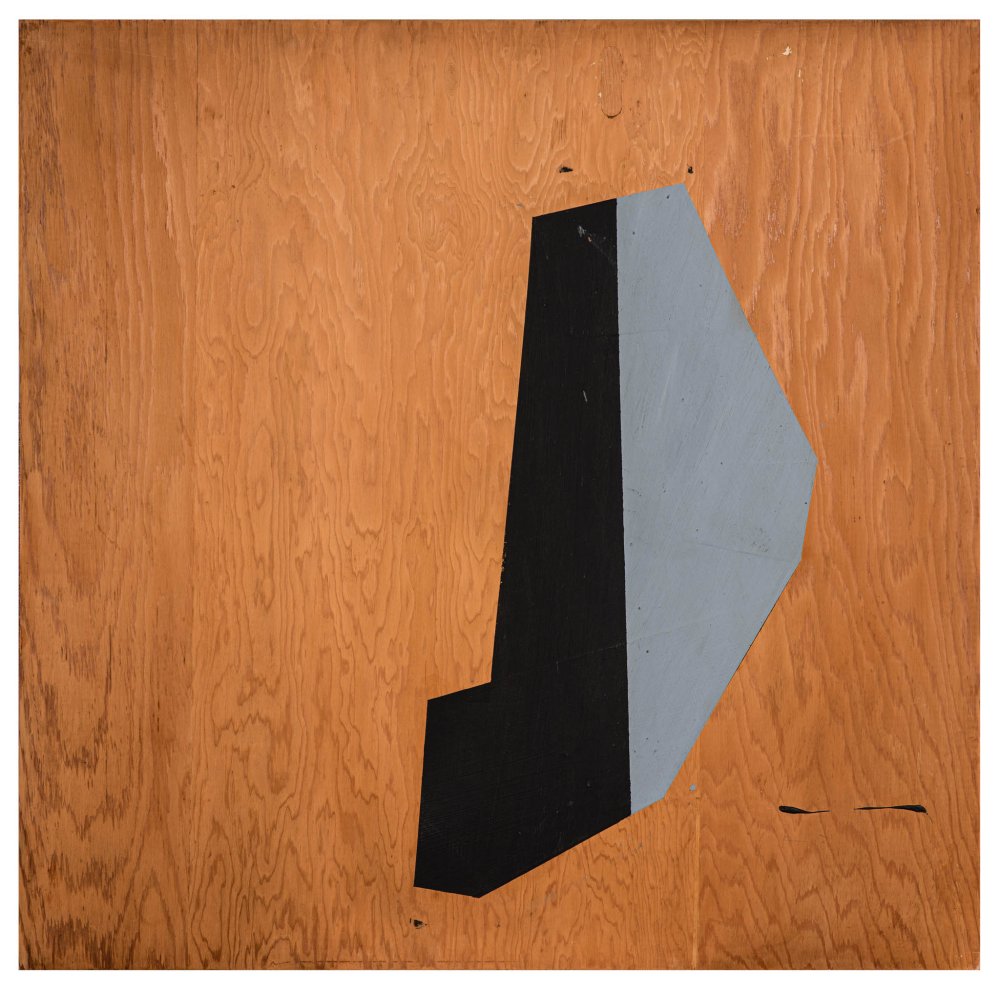 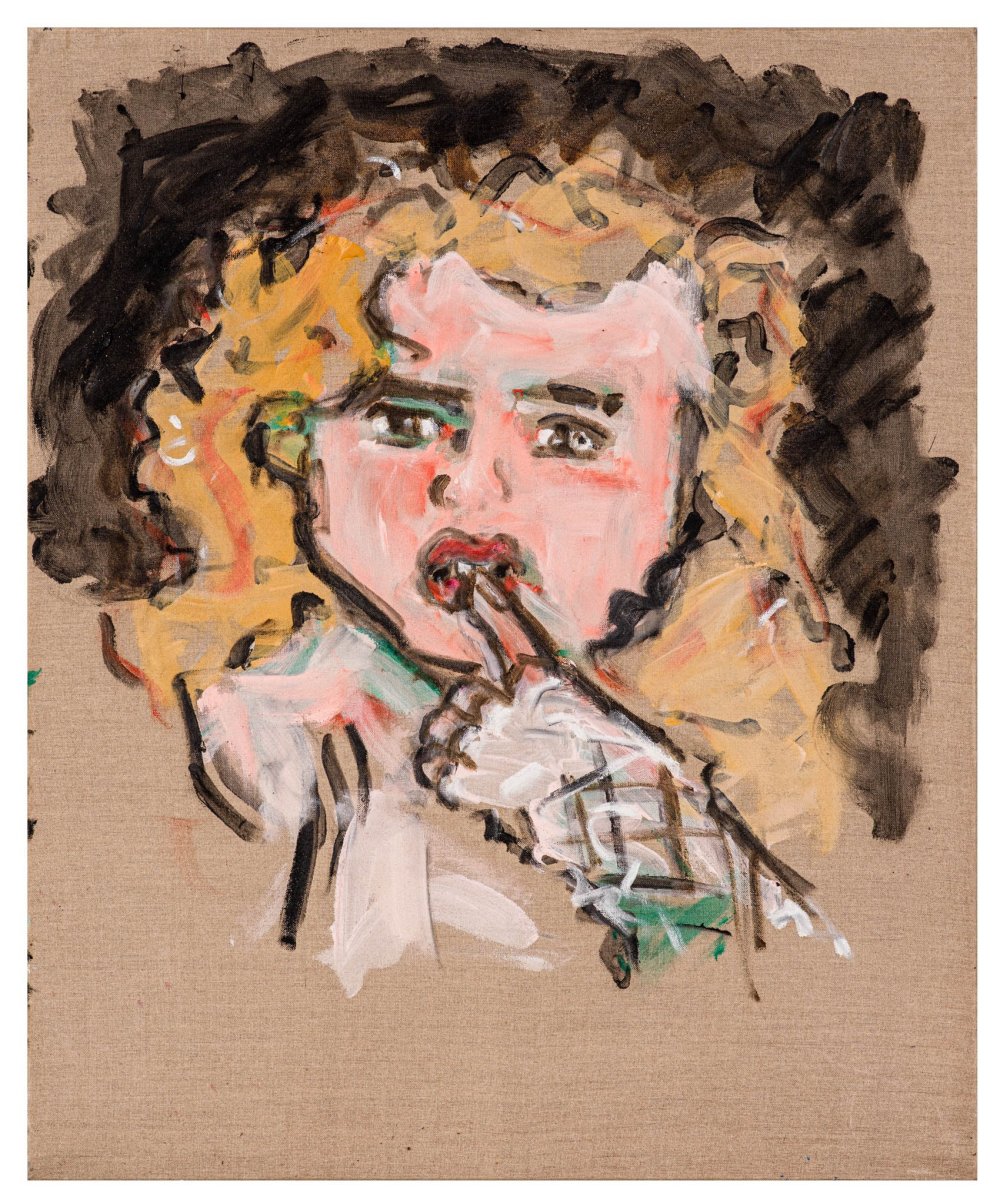 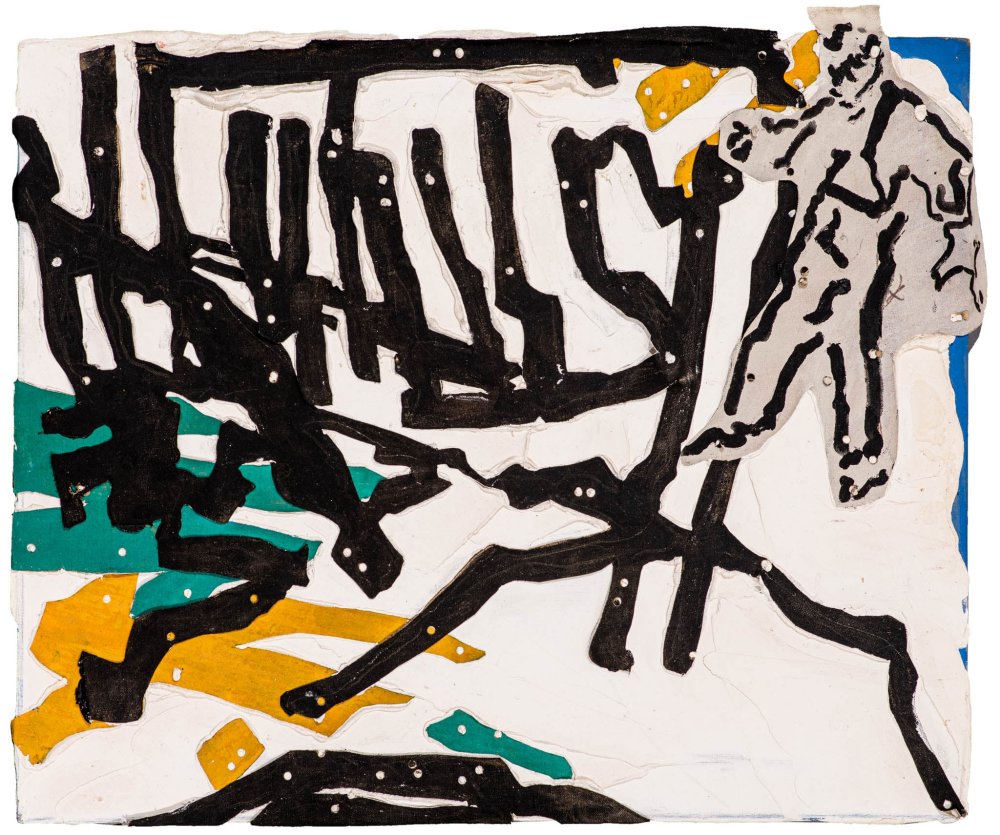 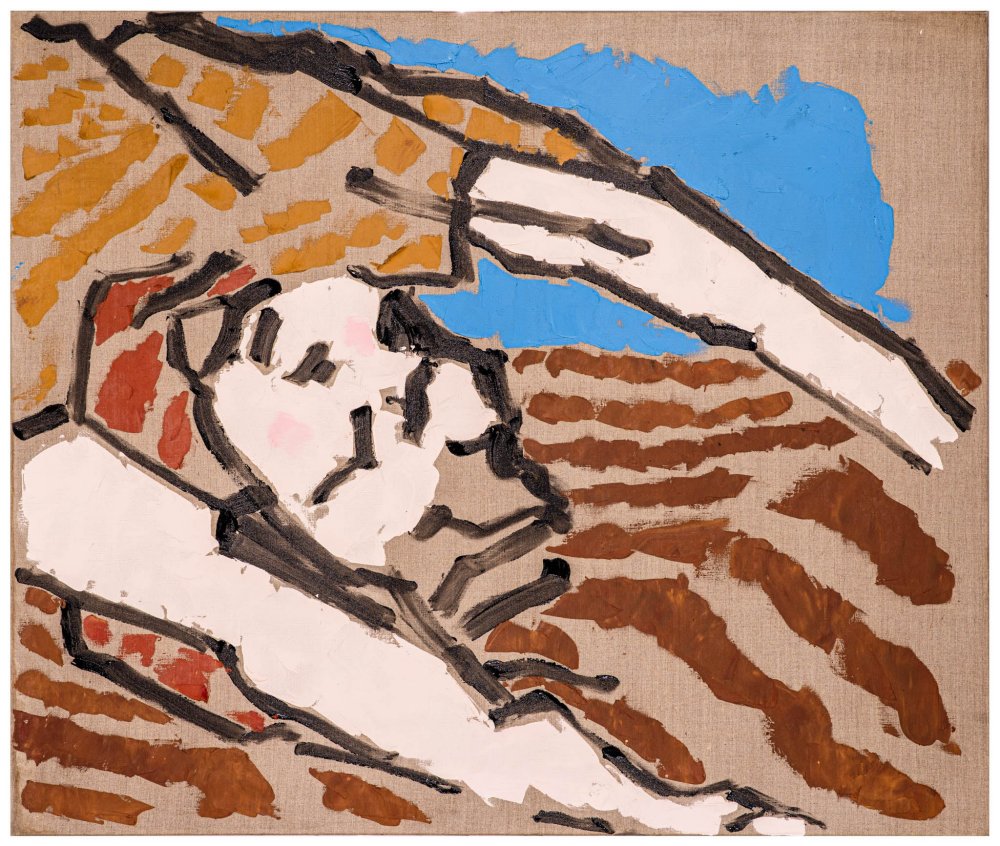 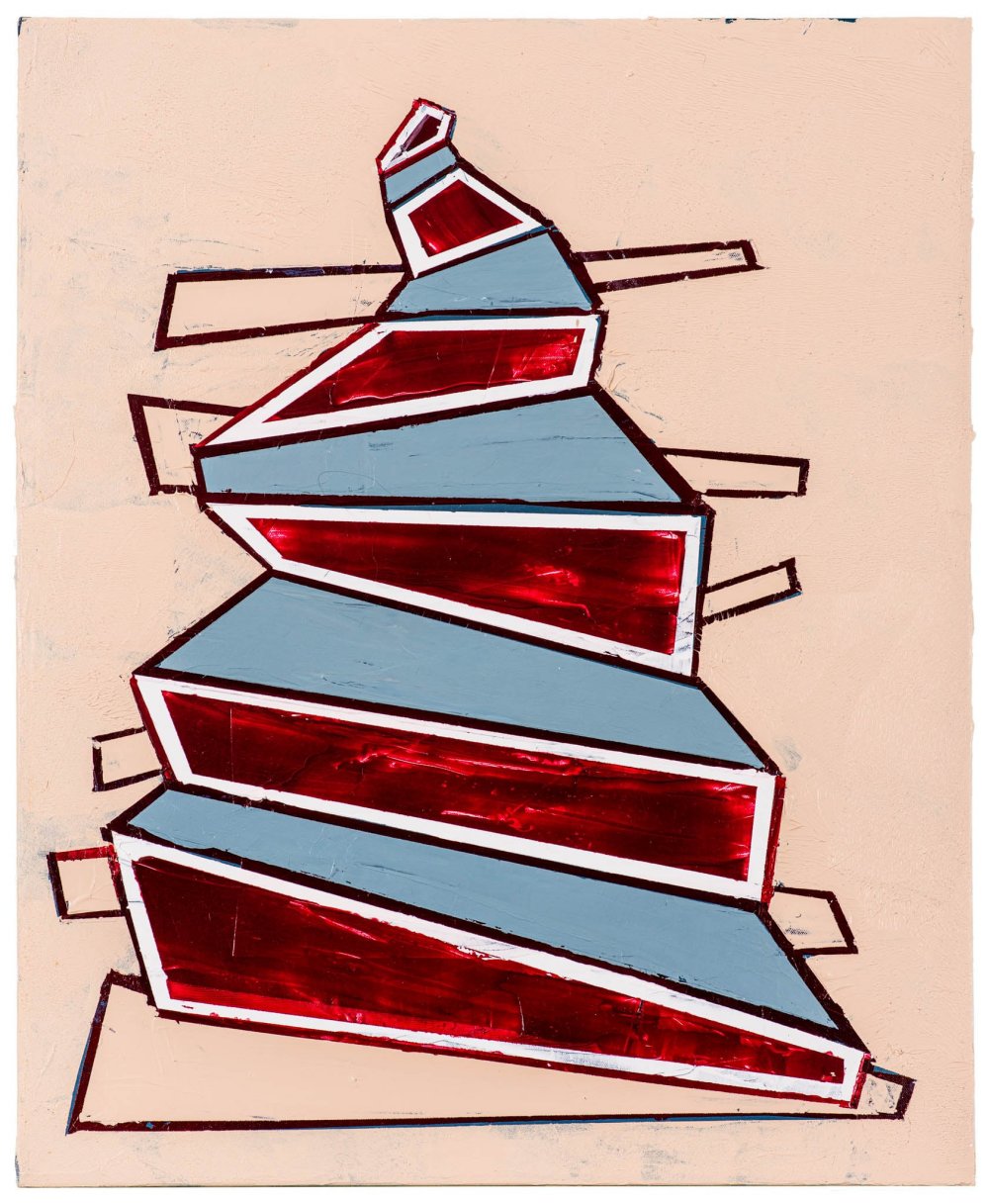 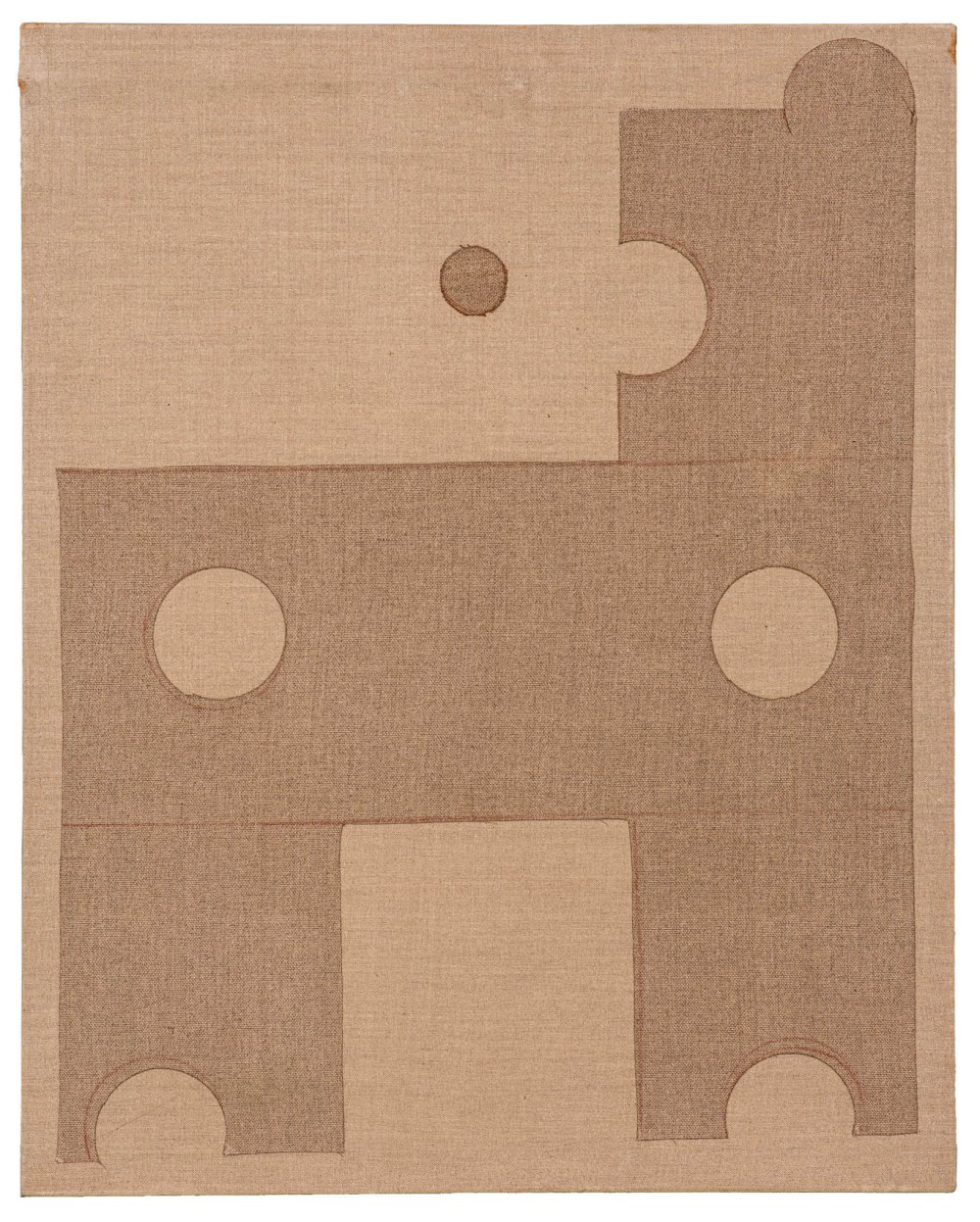 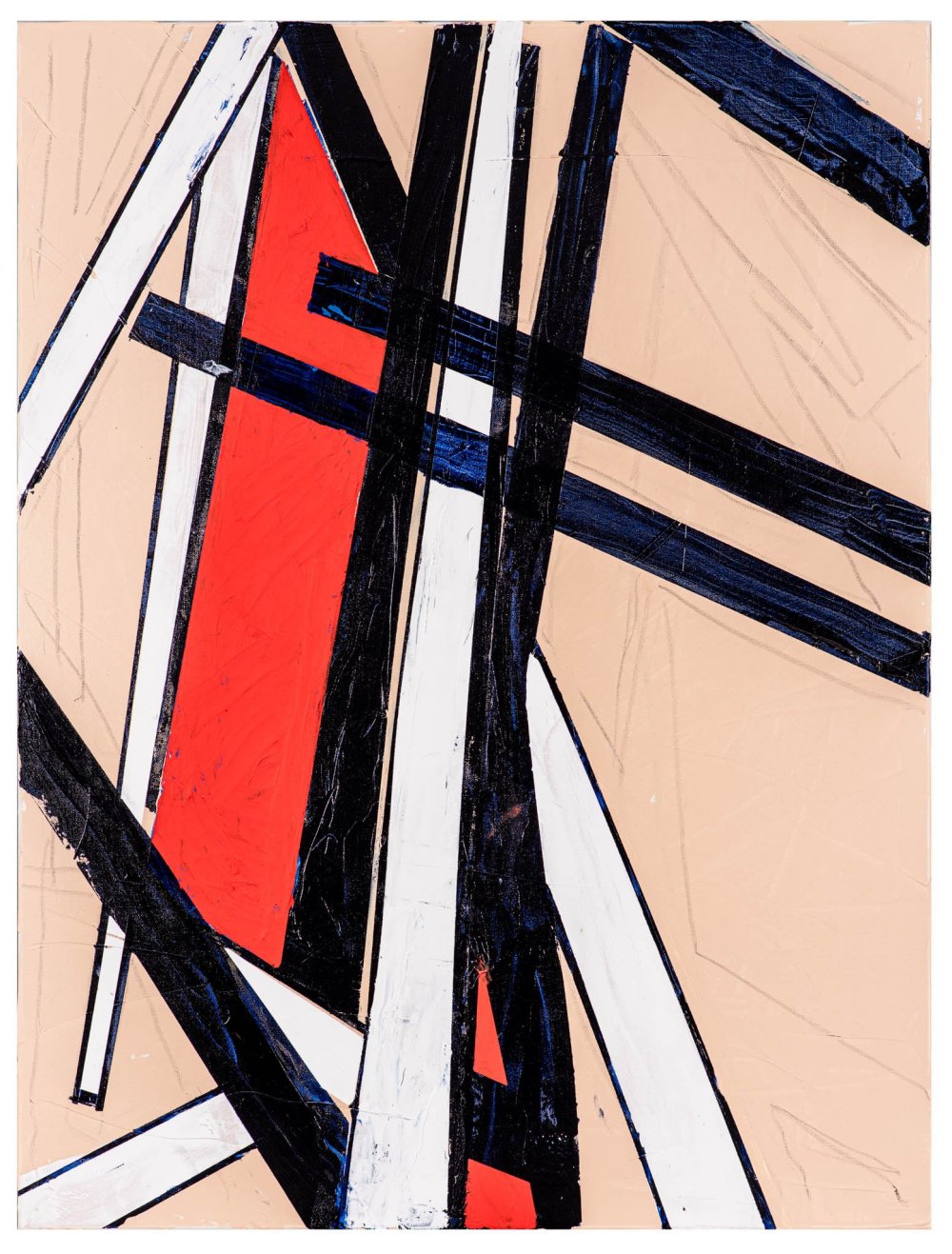 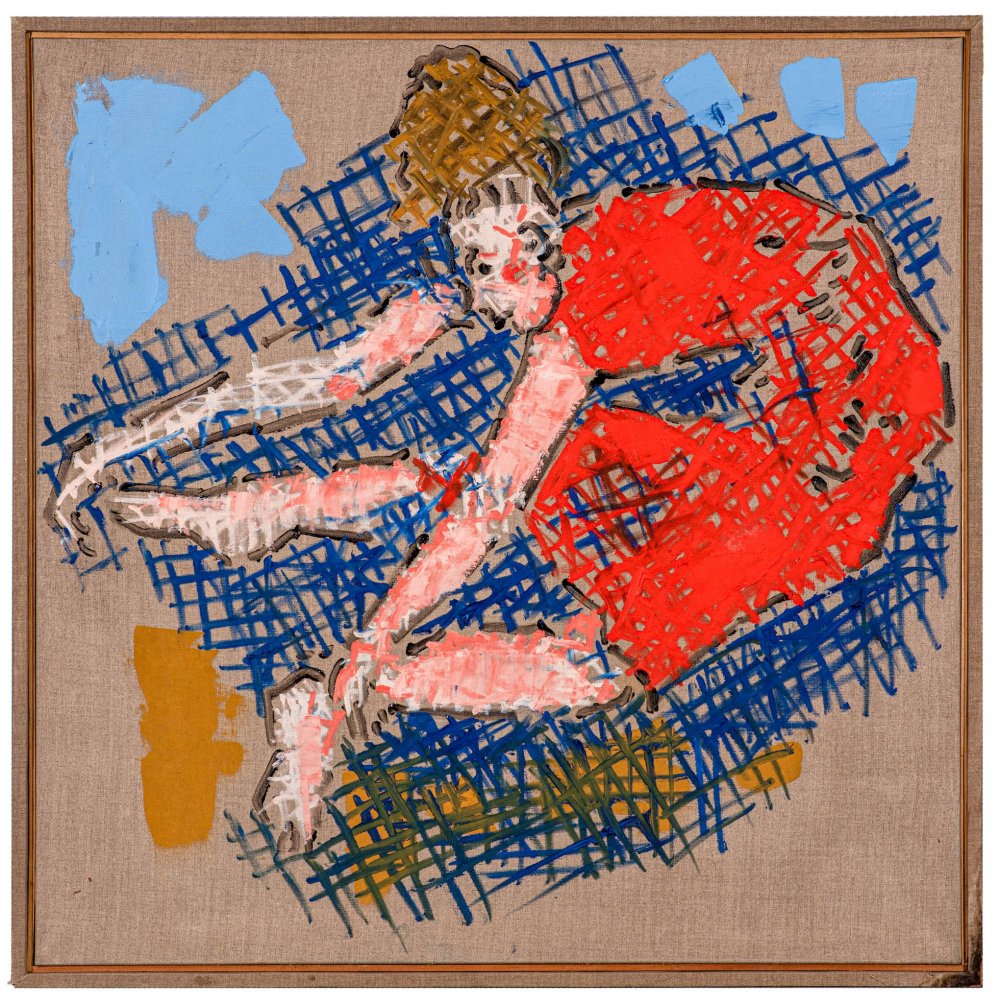 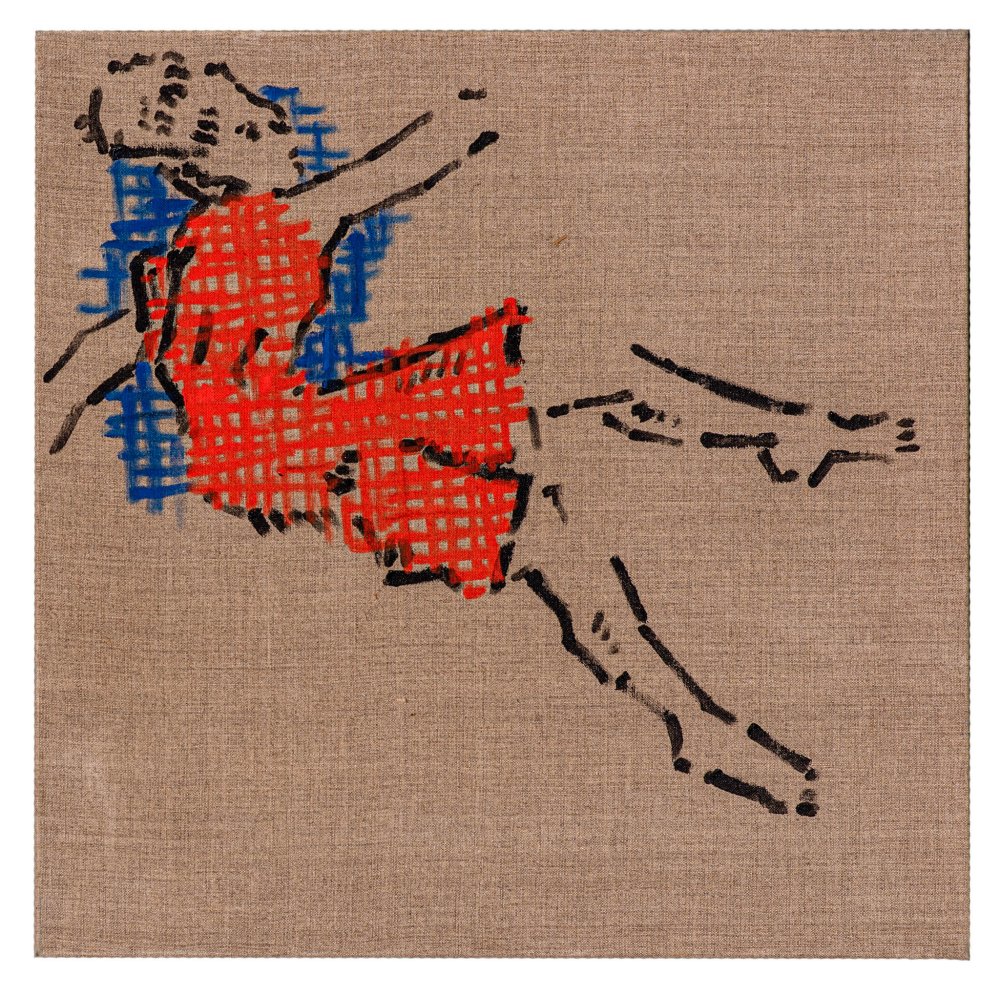 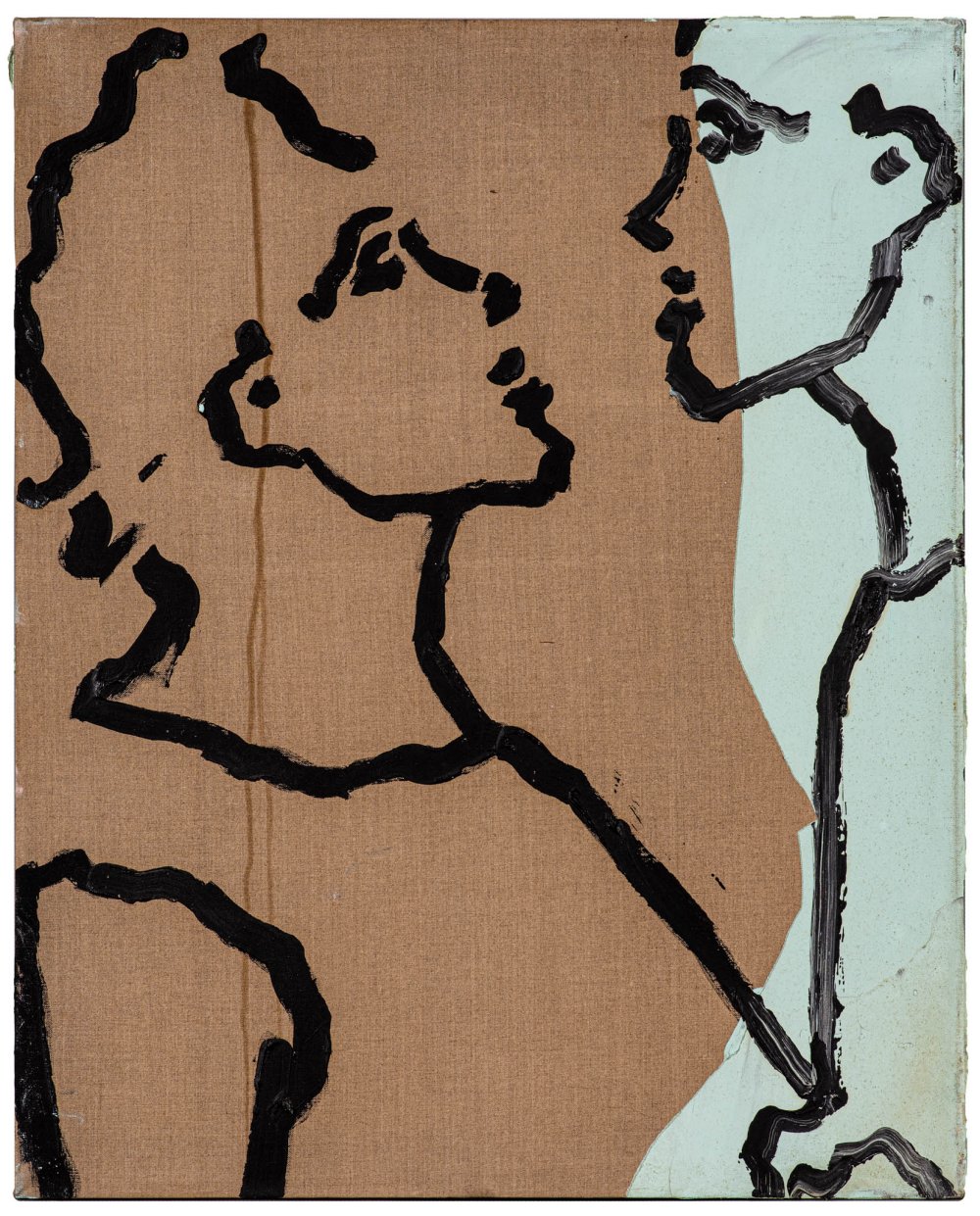 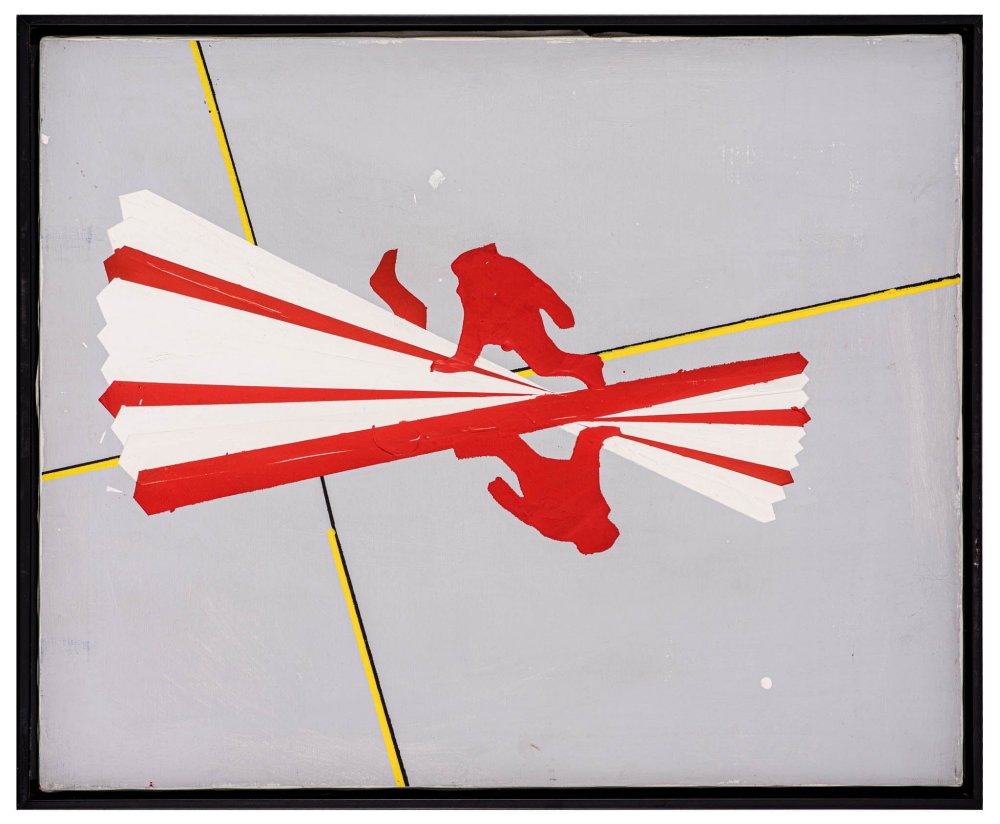 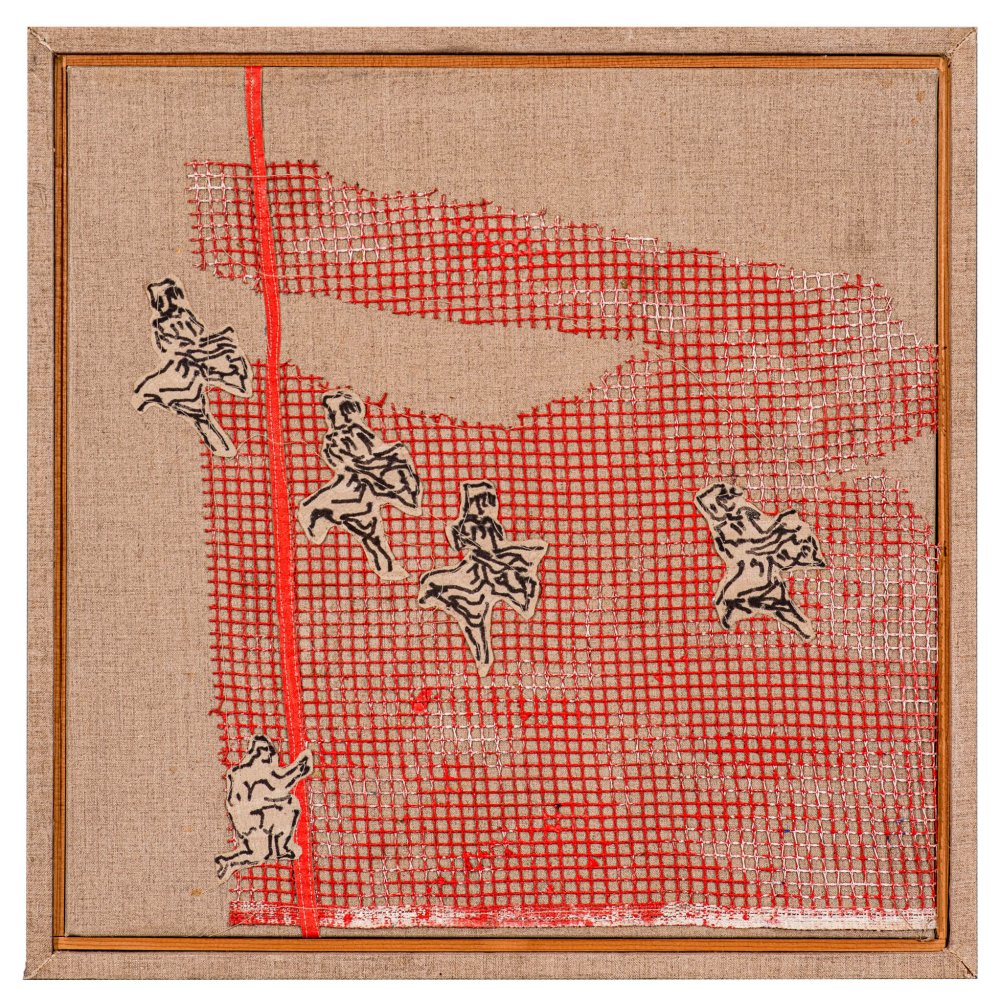 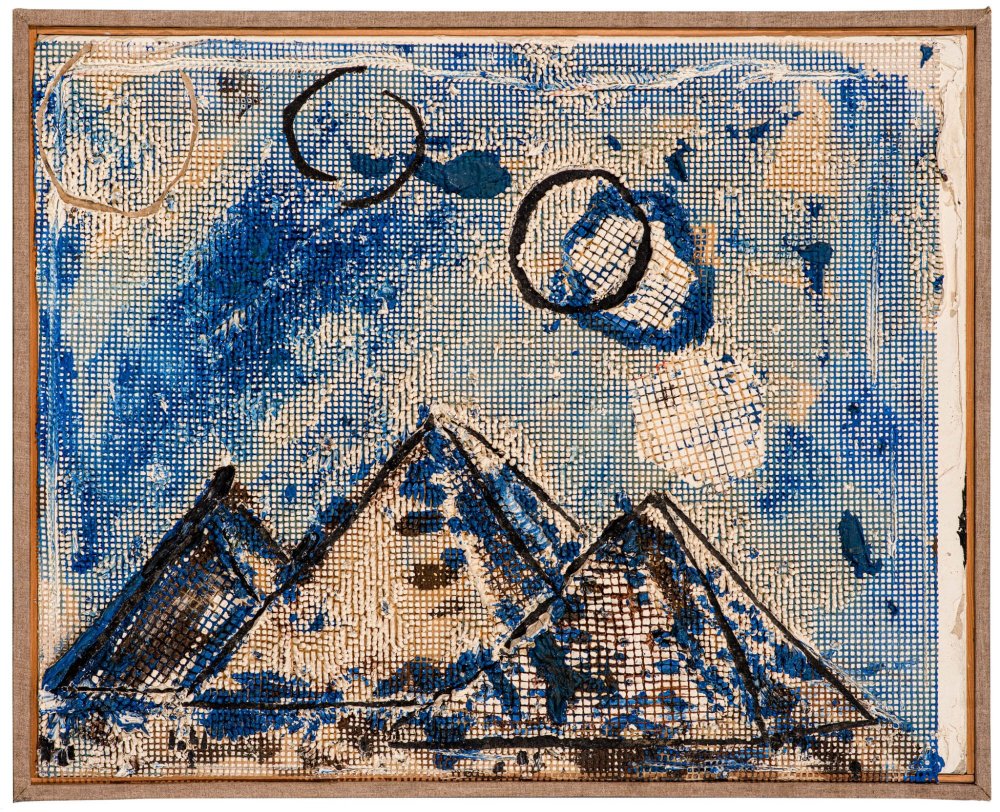 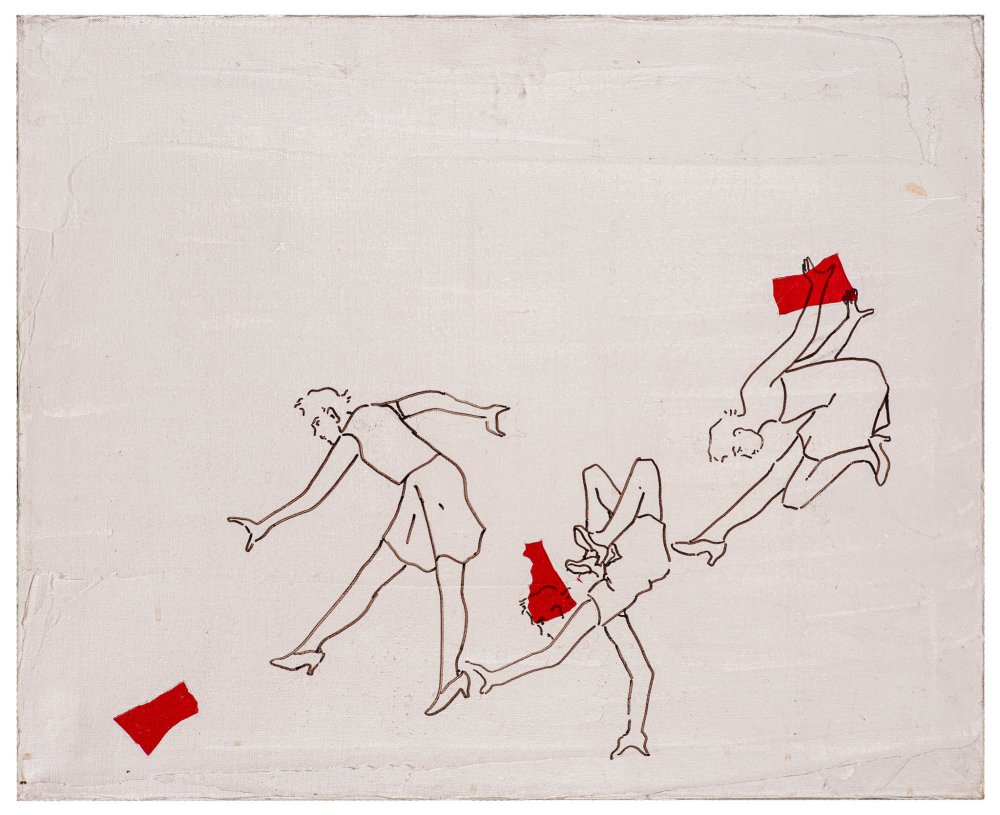 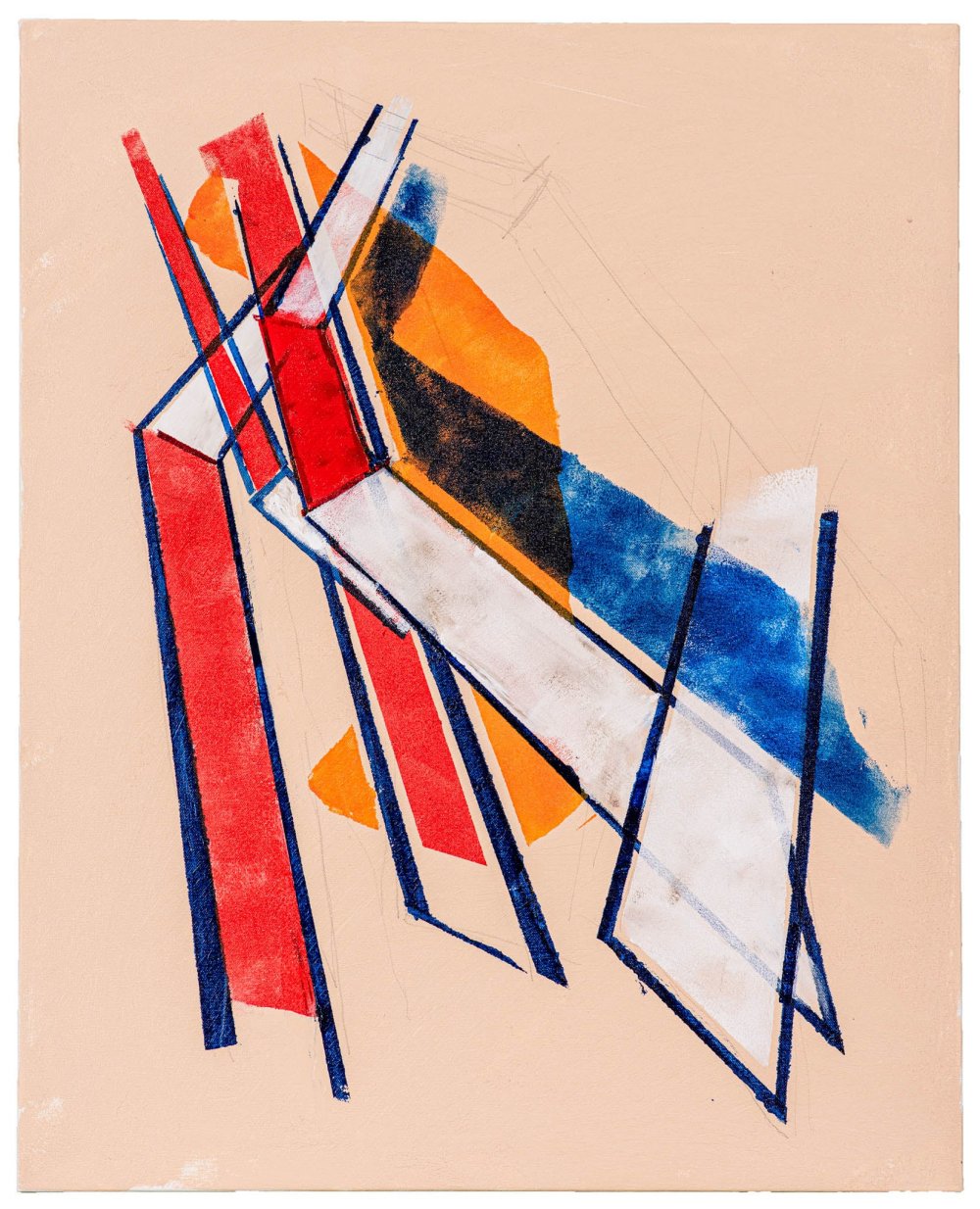 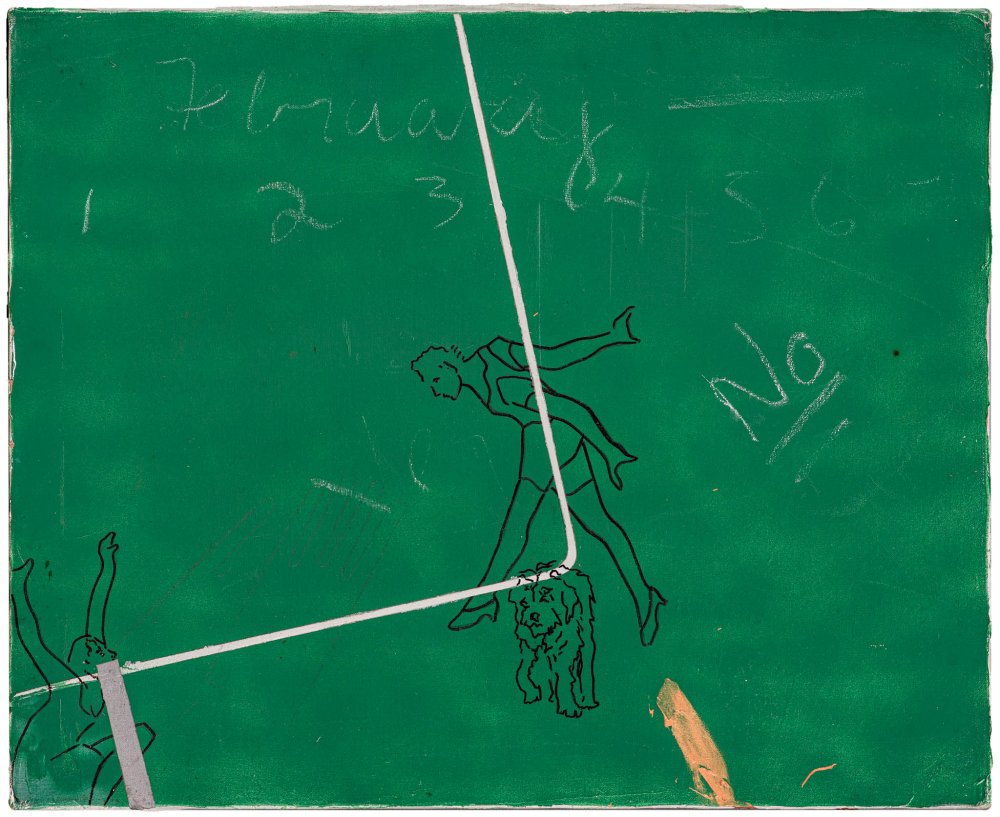 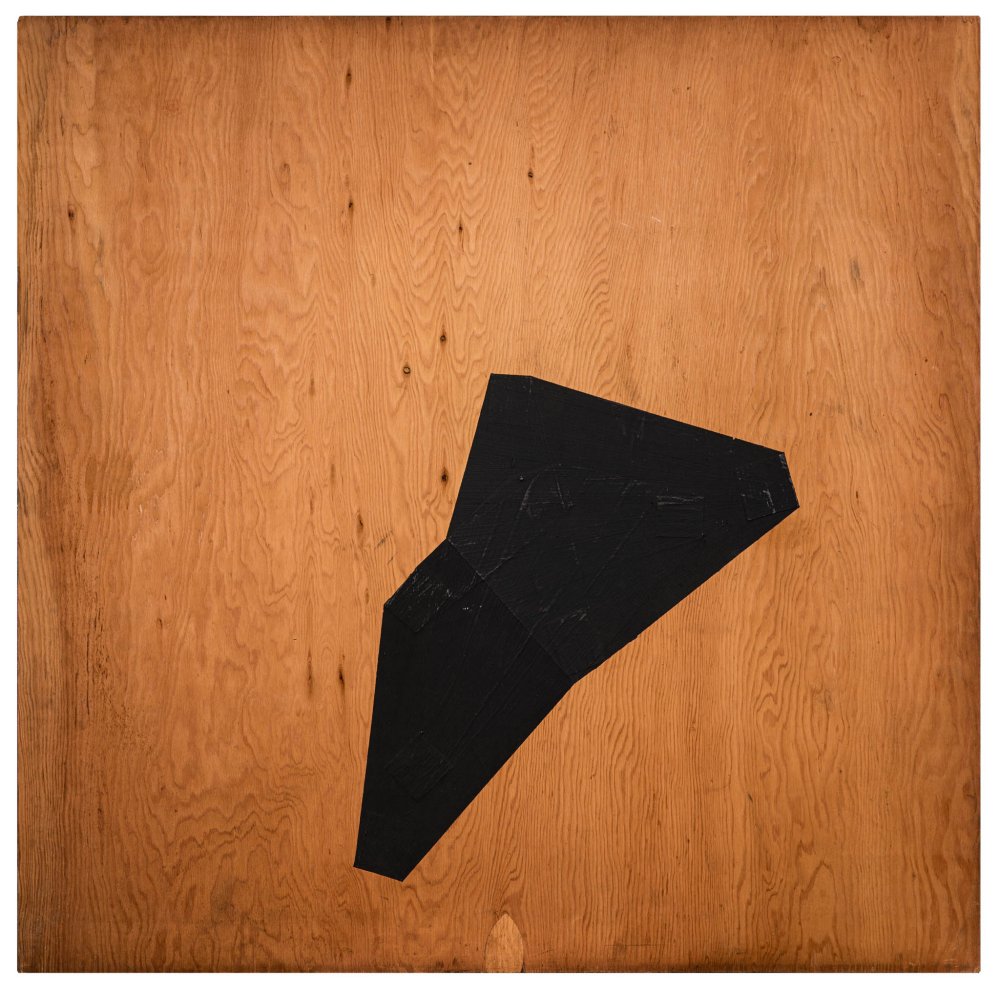 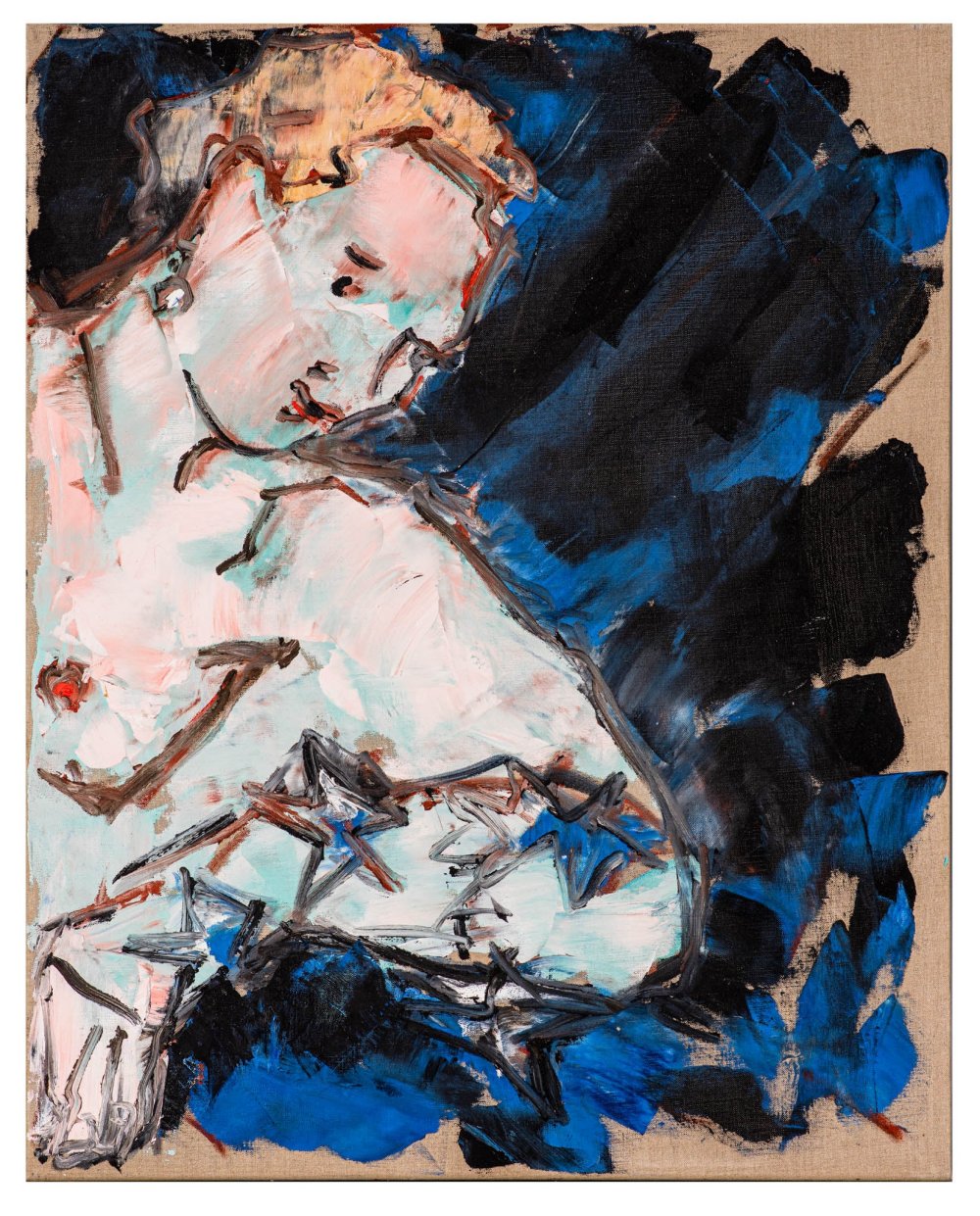 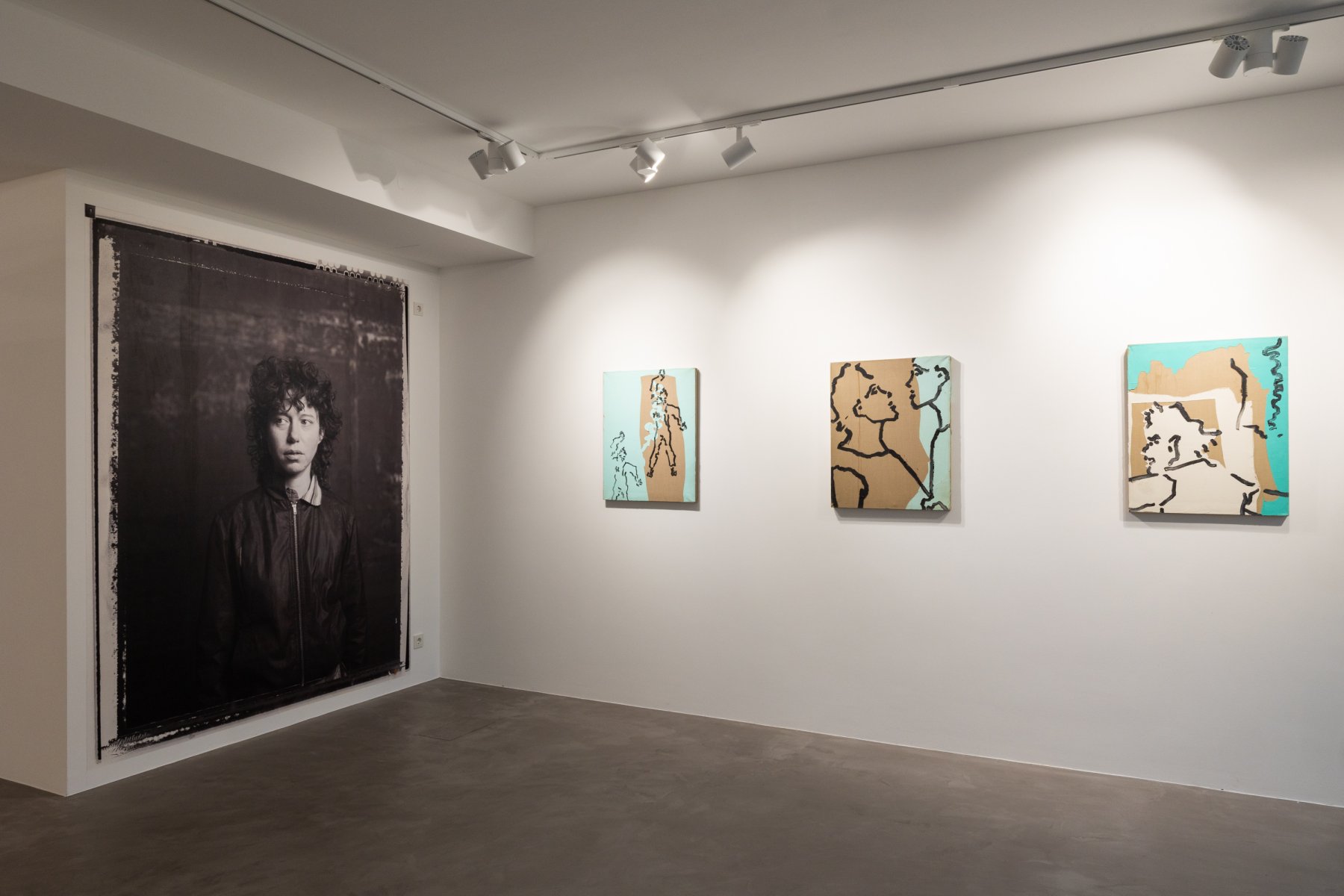 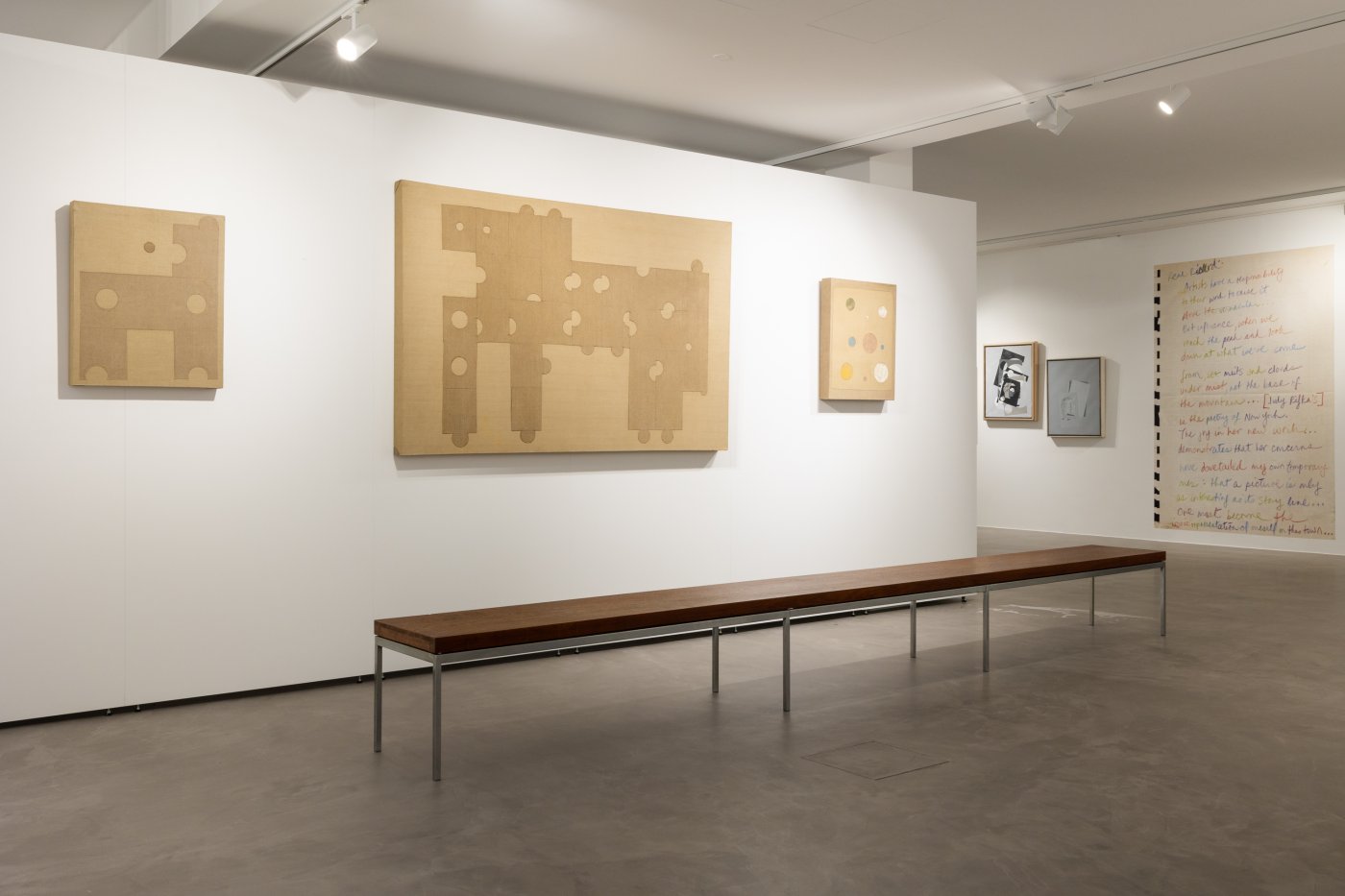 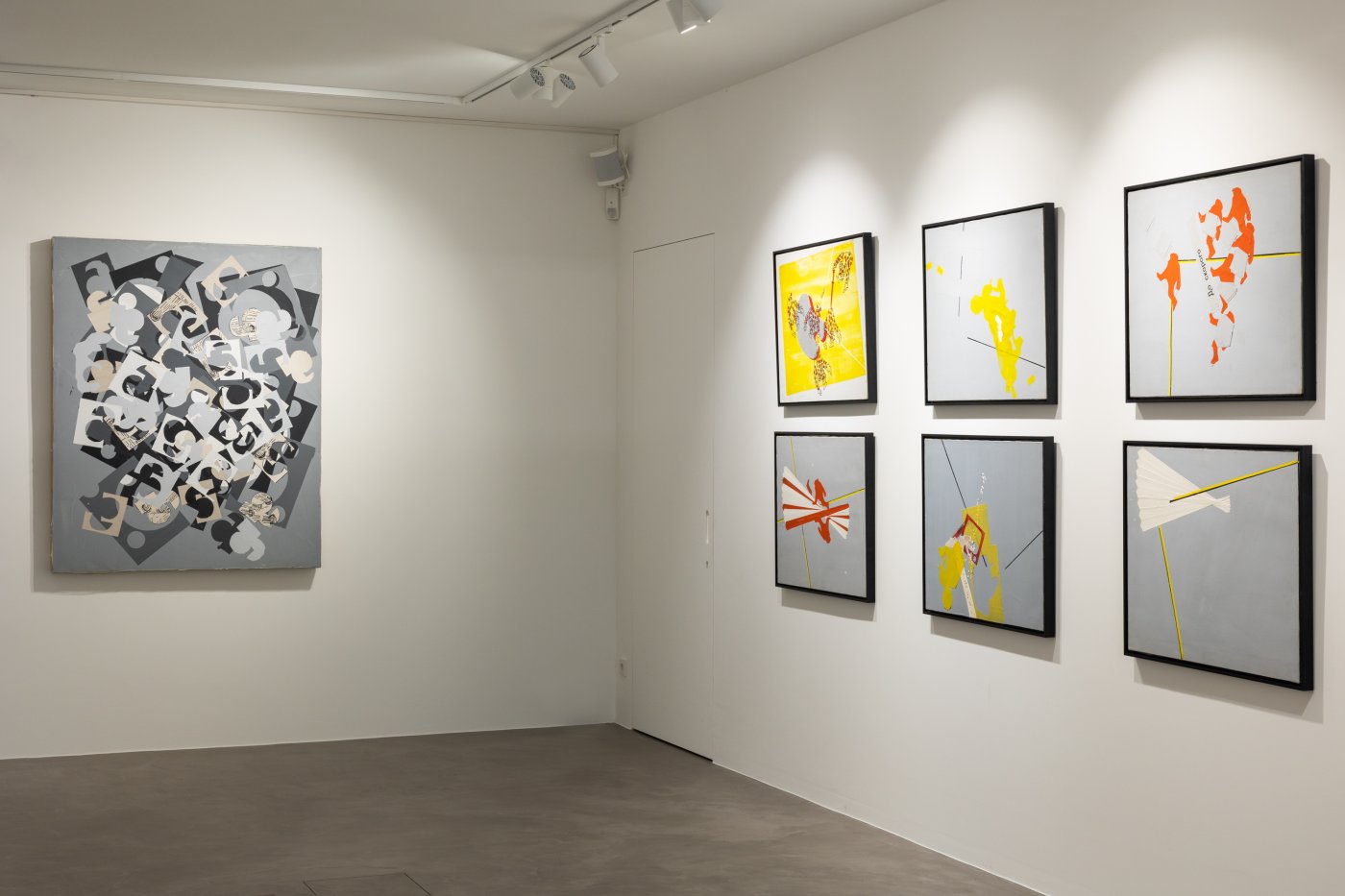 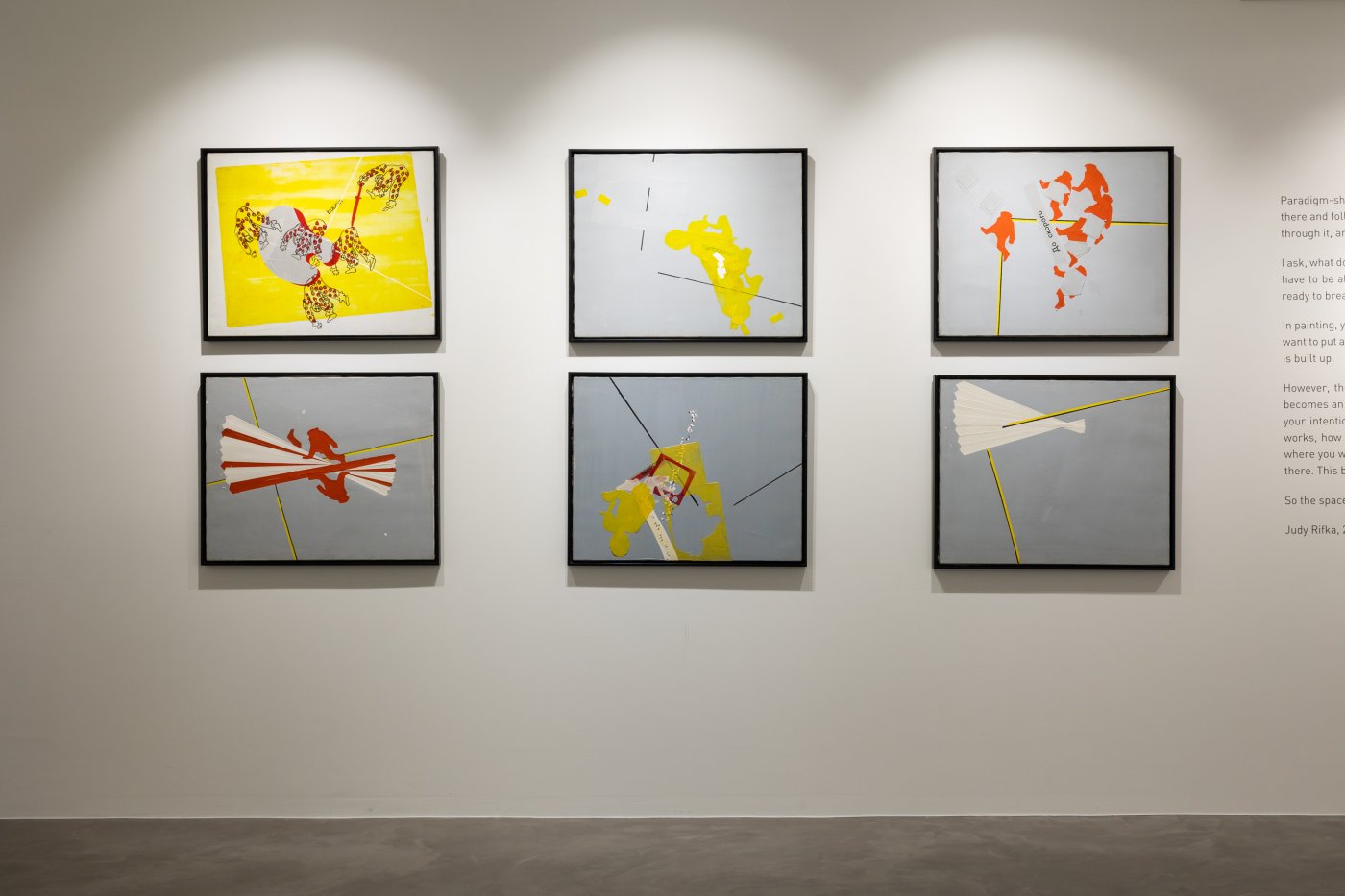 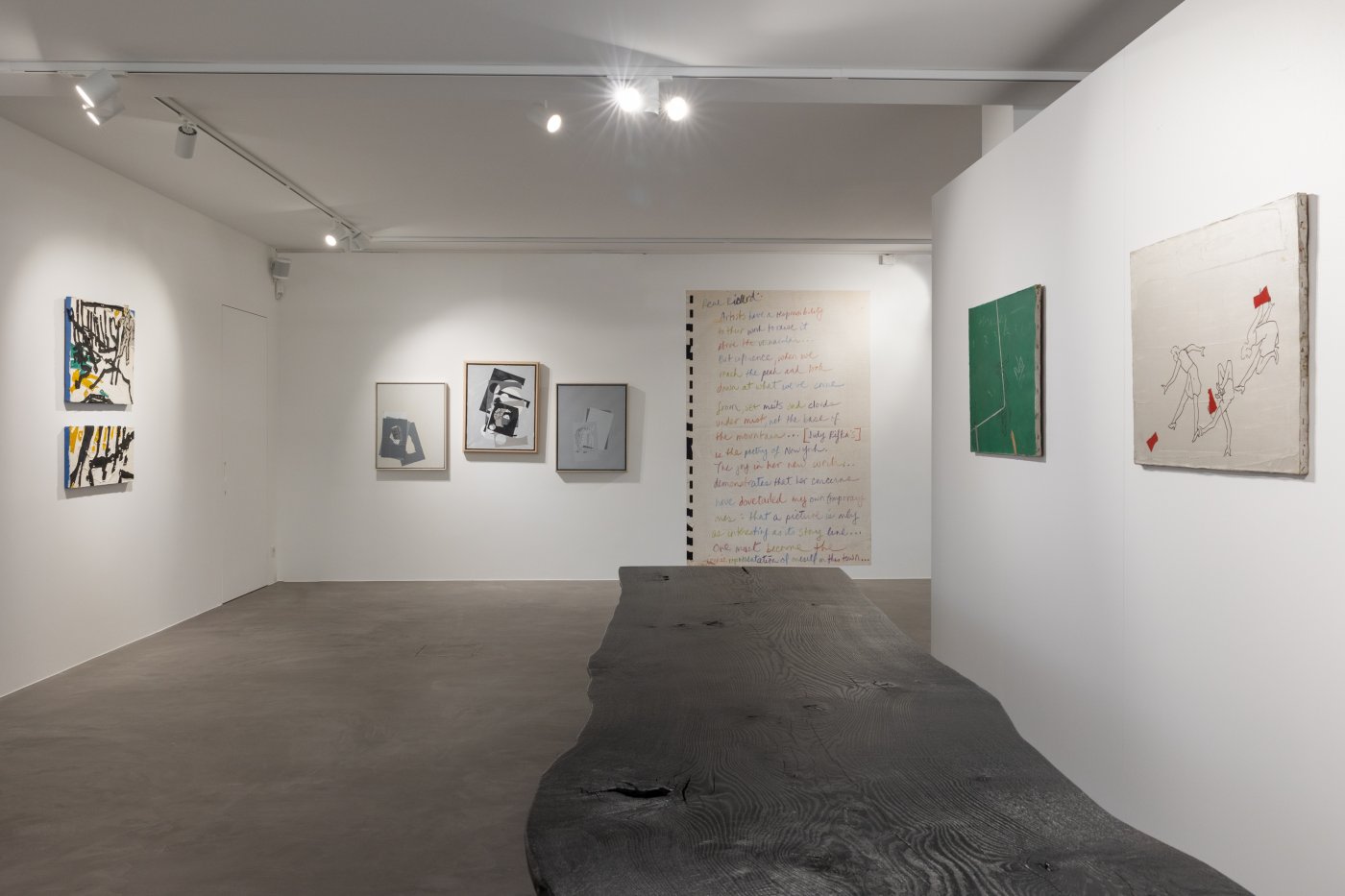 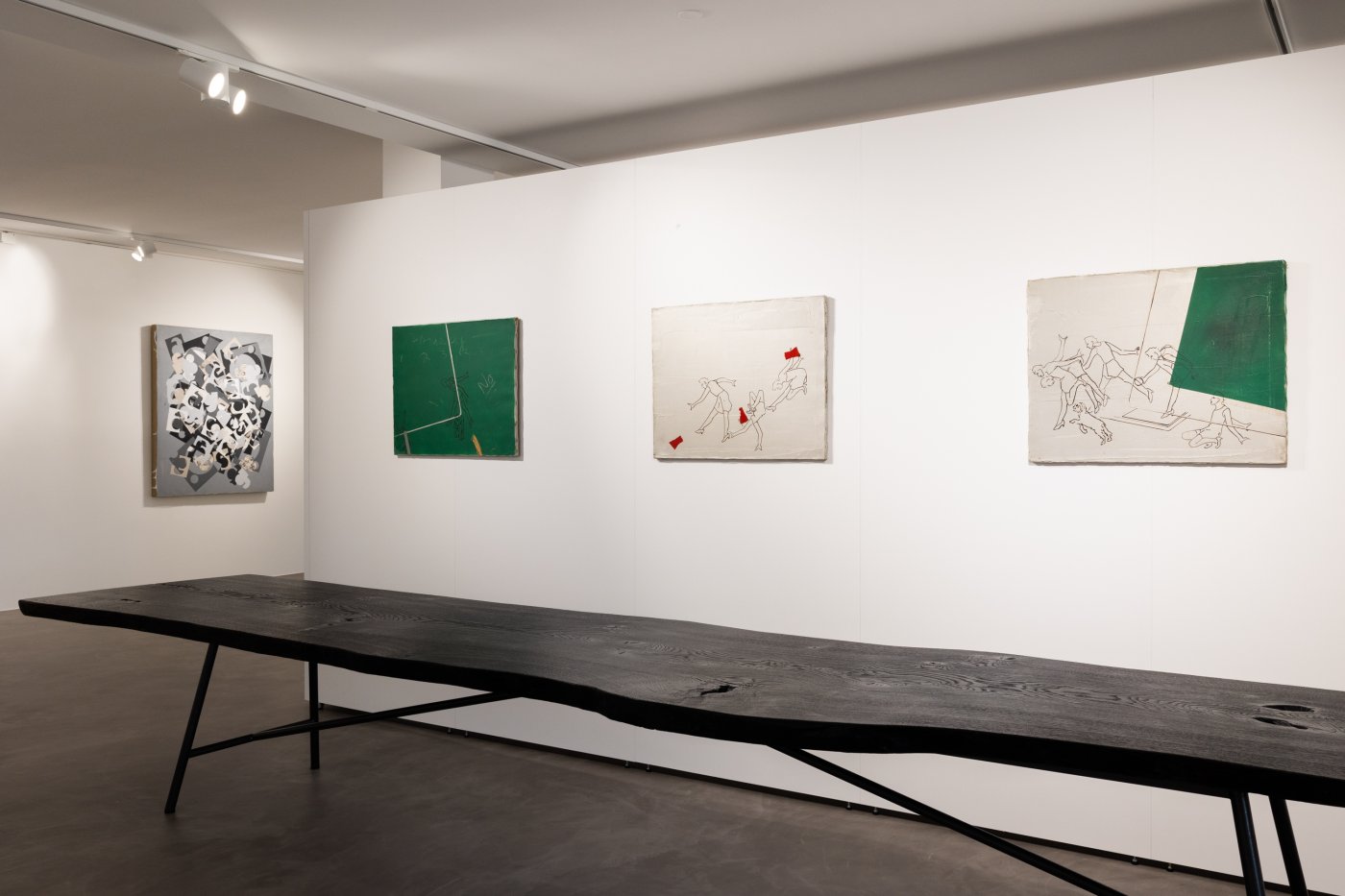 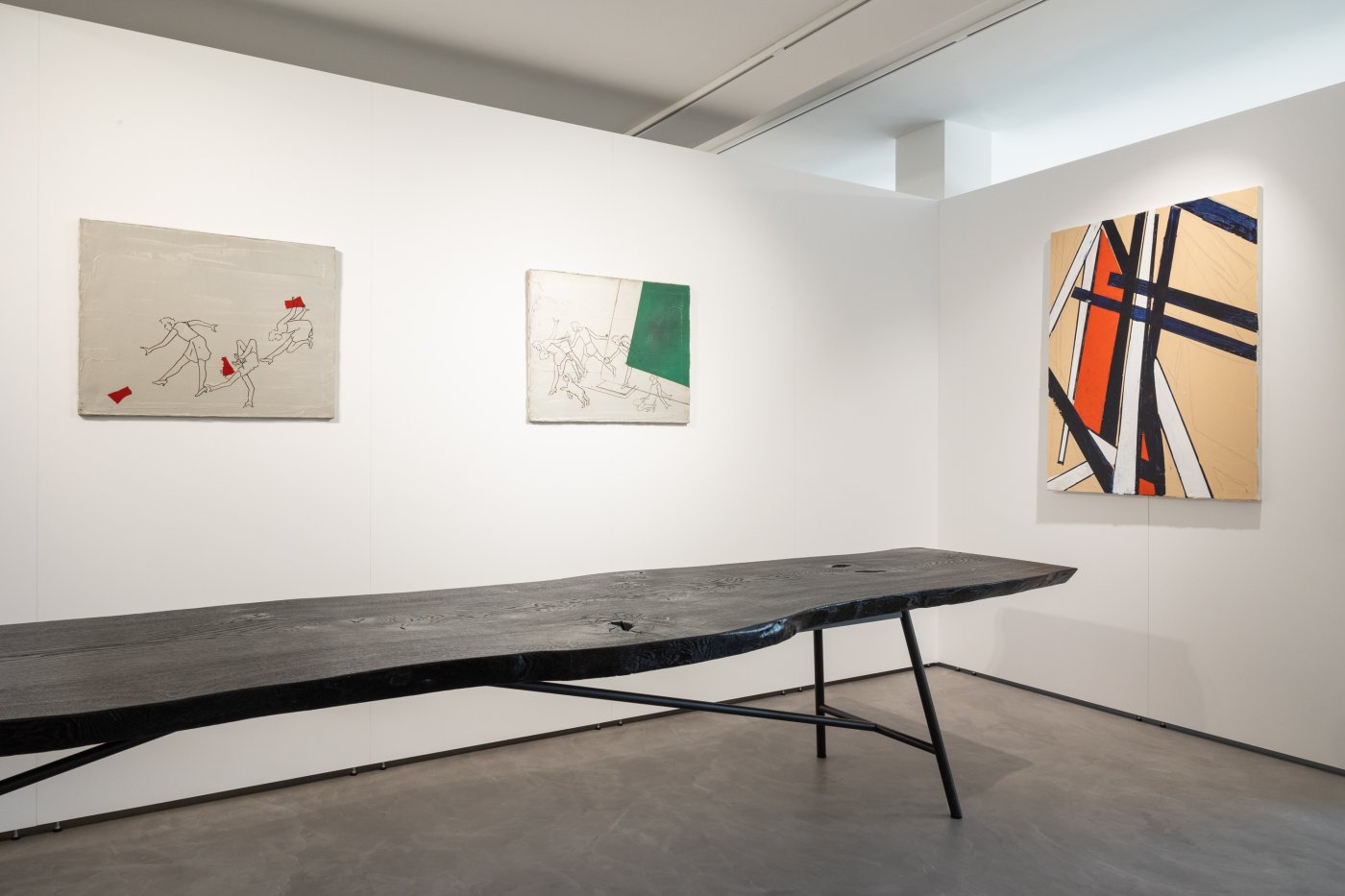 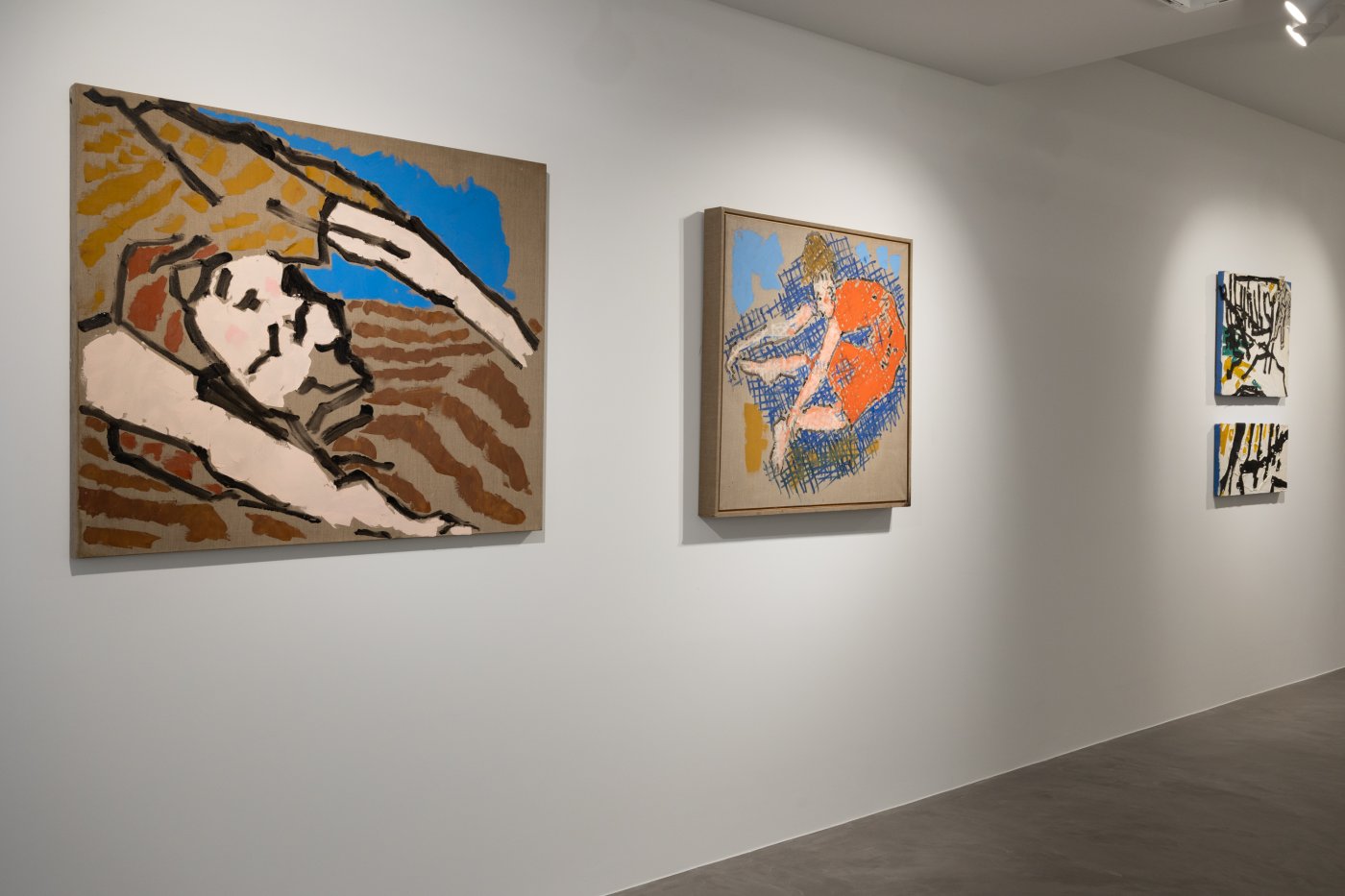 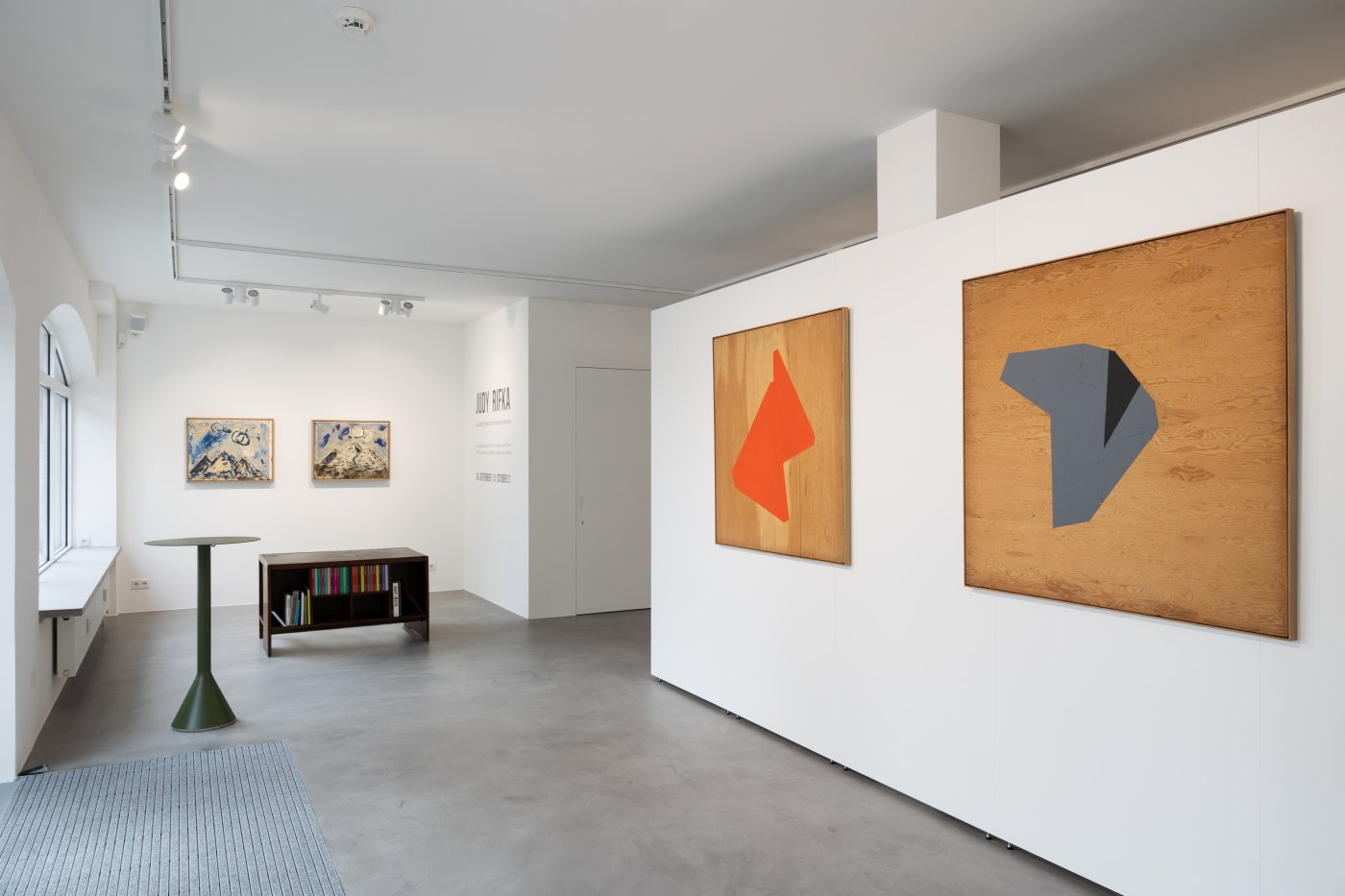 A restless spirit with a postmodernist, punk-like soul, Rifka set forth as an artist during the heyday of the Age of Aquarius, the hippie generation in the midst of Vietnam and political chaos. Her pro-action mindset in such an environment allowed Rifka to explore love and art simultaneously, whether traveling around or living on a Navajo Reservation in New Mexico to better understand space in a vast area, Judy Rifka was passionately and assuredly building on her constructivist mindset for the paintings that would eventually put her on the map in the mid 1970’s: her Single Shapes on plywood.

In his essay for the exhibition, the American curator Gregory de la Haba writes: “Rifka aims to capture line and forms positing in space as well its trajectory in space and its concomitant wake reverberating outward and within the four-walled holding cell —the 4’x4’ plywood panel used most often for these single shape paintings. These simple yet majestic forms are allowed to ‘dance’, she says, on the panel and by way of layering and building-up of handmade paint they slowly and painstakingly emerge as ‘morphing fields’, a body-form that ricochets within and without and builds momentum, a centrifugal-like force that emanates off the picture plane and exists markedly, agelessly, in the face of Postmoderism’s gaze. This movement dictates direction and hence allows the form to dictate design, starts designing itself, and trajects forward.“

Judy Rifka was born in New York City in 1945. Having been an integral part of the 70’s and 80’s downtown scene of New York City, her works featured in the 1975 and 1983 Whitney Biennials as well as Documenta VII in Kassel.

Her career spans over fifty solo shows and countless group exhibitions; her work can be seen in numerous public collections throughout the

Rifka has been widely written about, and featured in, among other places, Art Forum, Art in America, Kunstforum, Tema Celeste, Flash Art, The New Yorker, Elle and New York Magazine.

When does art become a viable commodity? Who decides?

It took nearly eighty years after the death of Johann Sebastian Bach in 1750 for the world to start tuning-in to his true genius. Herman Melville’s literary masterpiece Moby Dick was a commercial flop in his lifetime. And it was a French art critic in the 19th century who alerted the world that the 17th century Dutch artist Jan Vermeer was a master worth giving a standing ovation for. Life is dizzying and complicated and fills itself with anomalies, oddities, and things that defy norms and or expectations. Take for example the 50-plus year career of American artist, Judy Rifka, who took the New York art world by storm with her revolutionary Single Shapes on plywood paintings at the start of the 1970’s. “Every painter who saw them at the time recognized their influence” said the esteemed art critic, Rene Ricard, in his oft-cited, 1981 Artforum essay, The Radiant Child.

Almost immediately, important collectors like the Vogels and Jean Paul Najar began buying them. Artists and critics alike praised Rifka’s work. In April, 1974, art critic Jeremy Gilbert-Rolfe wrote in Artforum that Judy Rifka’s Single Shapes “dominated the show”… and …“that Rifka’s is the most devastatingly original formulation of painting’s identity that I’ve encountered in some time.”

And while extolling on the picture-making virtues of Basquiat, Haring and their fellow downtown, art-scene colleague, Judy Rifka, in The Radiant Child, Rene Ricard posited the question: “Is innovation important?” His answer was telling:

“The trick is to make it appear that the innovator ripped it off from you. A good example of this principle is the case of Judy Rifka’s work at the debut of the 70’s. Her Single Shapes on plywood are among the most important paintings of the decade…”

But Ricard, even then, bemoaned the fact that Rifka wasn’t getting her due, writing:

“…She could then be called a painter’s painter if feeding ideas to others is what painters do. I suspect it would be a heartbreaking thing to watch others get credit for your invention. Her researches into Constructivist theory were groundbreaking, but a pioneer is never at a loss for unchartered territory.”

So what’s her art worth?

In 1983, the German magazine Kunstforum explored the contemporary art scene in New York only to conclude that Judy Rifka is the quintessential New York artist and the “outspoken representative of the post-minimal era.”

Back when the art world was smaller, before art fairs and the internet, Judy Rifka, it seemed, was everywhere. She participated in the first show at the Mudd Club (curated by her close friend, Keith Haring) and at PS1’s inaugural exhibition in Long Island City, Queens; had an entire floor space at the 1983 Whitney Biennial for her large Wallpaper paintings, rocked Documenta 7 in Kassel thanks to the German curator extraordinaire, Klaus Honnef; was included in the infamous Times Square Show, collaborated with the art collective Colab, created multiple design covers for the legendary Art-Rite magazine, had her art on the cover of Art In America, and is in 26 museums and institutions around the world. And from the late 70’s to early 90’s sold hundreds of works through her main dealer, Brooke Alexander, in New York City.

But you wouldn’t believe any of it judging from Rifka’s auction records which are not only dismal they are practically non-existent. But are auction prices the end-all to an artist’s value? Is our final judgement of an artist set-in-stone by the final hammer price only?

So what’s her art worth?

Or did all the influential critics, renowned writers, famous artists and important collectors who admired, purchased, and wrote glowingly about Rifka’s work get it all wrong? Maybe Haring, Ricard, Honnef, Bochner, Gilbert-Rolfe—and the countless curators—from New York’s Metropolitan Museum of Art to the Rheinisches Landesmuseum in Bonn to Kunsthalle Luzern were all asleep at the wheel and made the worst judgements in art history’s history when they selected Rifka’s art for exhibitions? Maybe their assessment about Judy Rifka’s art was abjectly incorrect?

Or was it? We must take a closer look (‘in the rearview mirror’) because echoes of her magnificent past continue to reverberate….

In a 2007 New York Times review of High Times, Hard Times: New York Painting, 1967-1975, Roberta Smith wrote of the “brave if deficient show” that “some inclusions seem almost ludicrous, given certain rather obvious absences… of Judy Rifka…whose efforts… were among the most closely watched developments of the early ’70s.”

Located on the foothills of the Bavarian Alps in the artist town of Murnau am Staffelsee, PULPO GALLERY is pleased to present Judy Rifka: A Glance Through The Rearview Mirror (An Assessment of Her Formidable Art: 1974—Present). Because if ever there was an artist ripe for reassessment, Ms. Rifka is most certainly one for the ages. A force who left an indelible mark on art-history’s page which in turn leaves us in the art world a little perplexed and wondering: So what’s her art worth?

Courtesy of the artist and PULPO GALLERY, Murnau am Staffelsee