GAVLAK Palm Beach presents Faces and Places, a solo exhibition of new and historic bas-reliefs by the artist Karen Carson. Inveterately experimental throughout her career, this show finds Carson applying her longtime practice of minimalist fabrication towards a new realm of portraiture — making faces from the planar woodwork she has previously put toward abstracted ends. 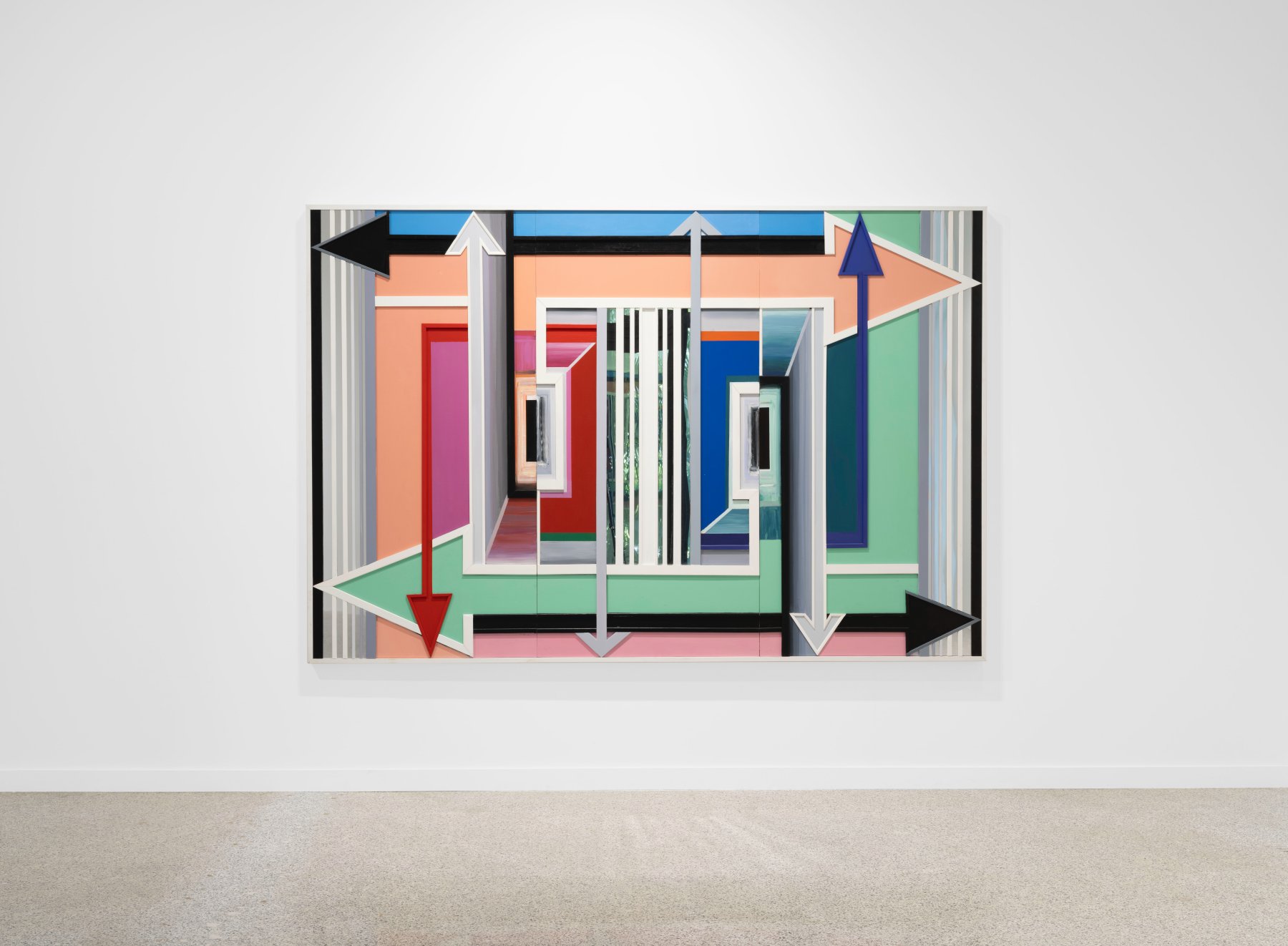 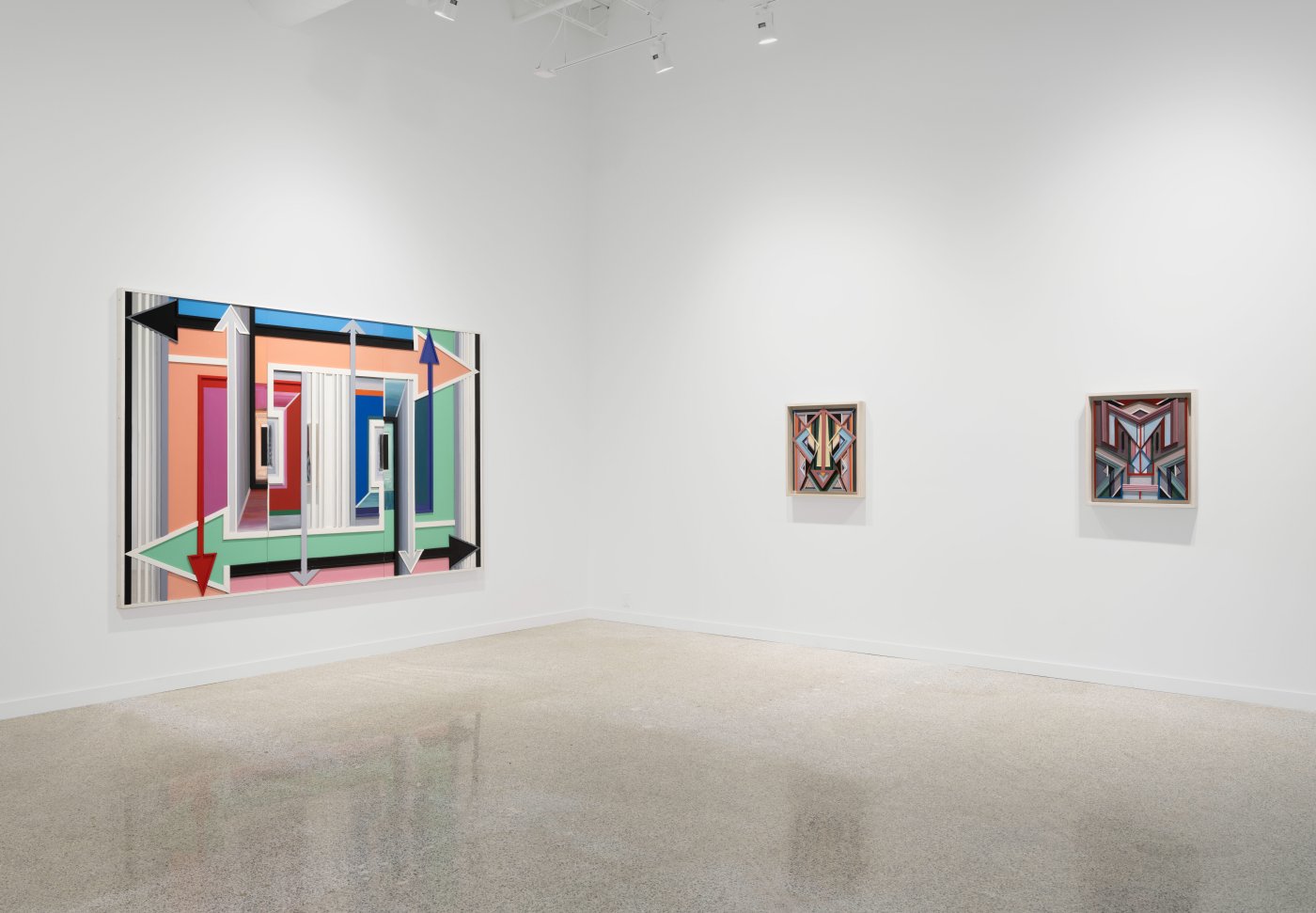 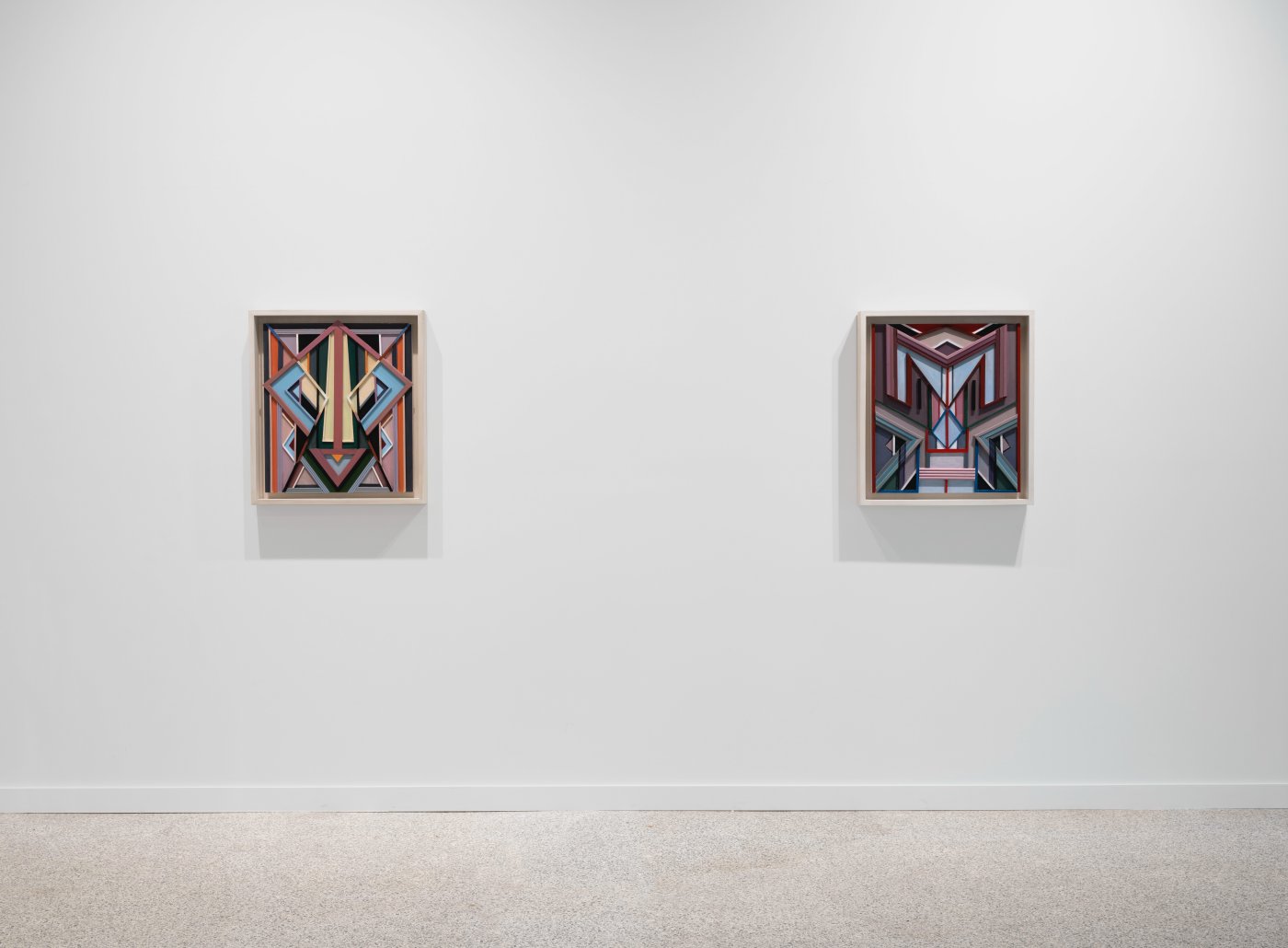 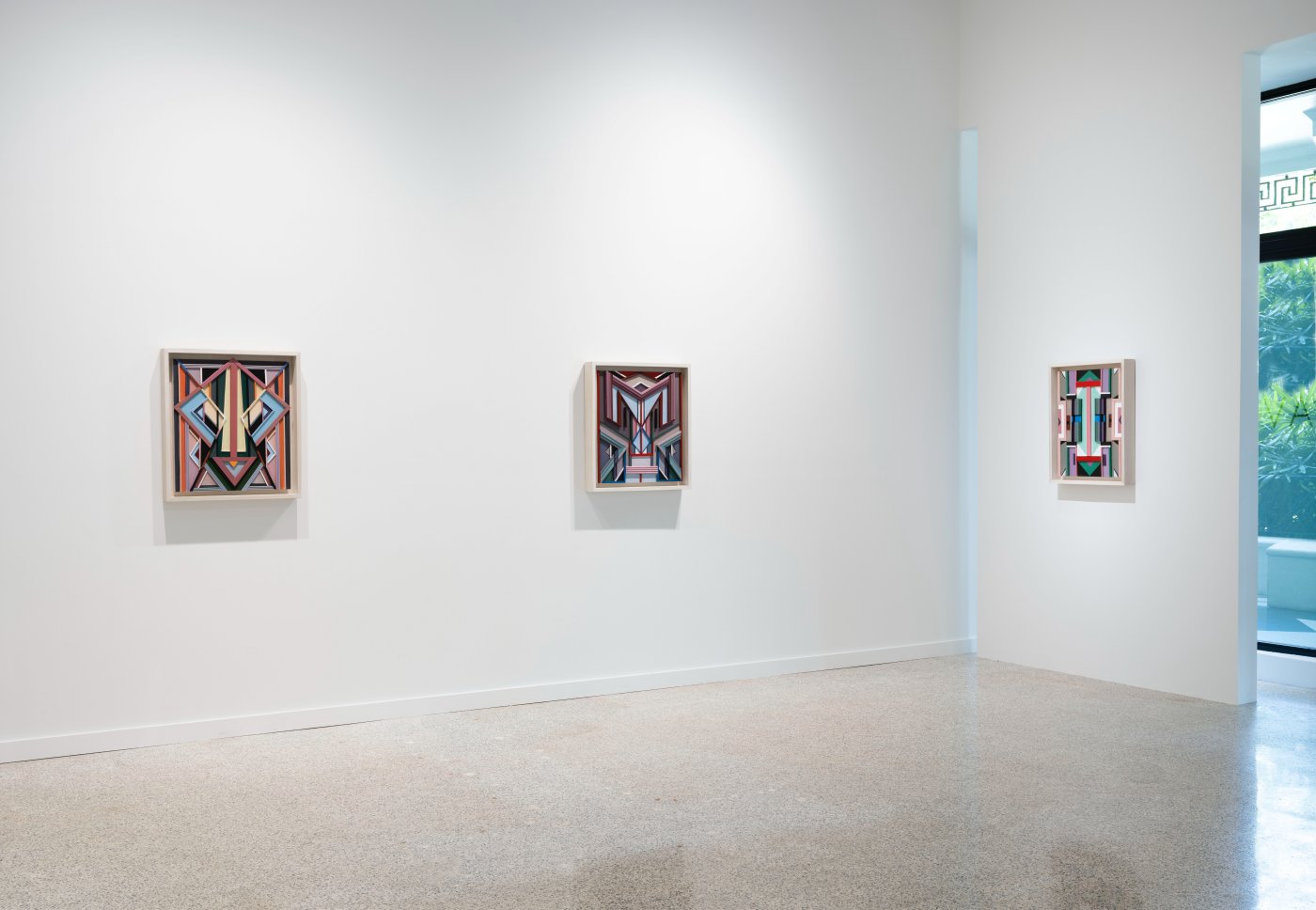 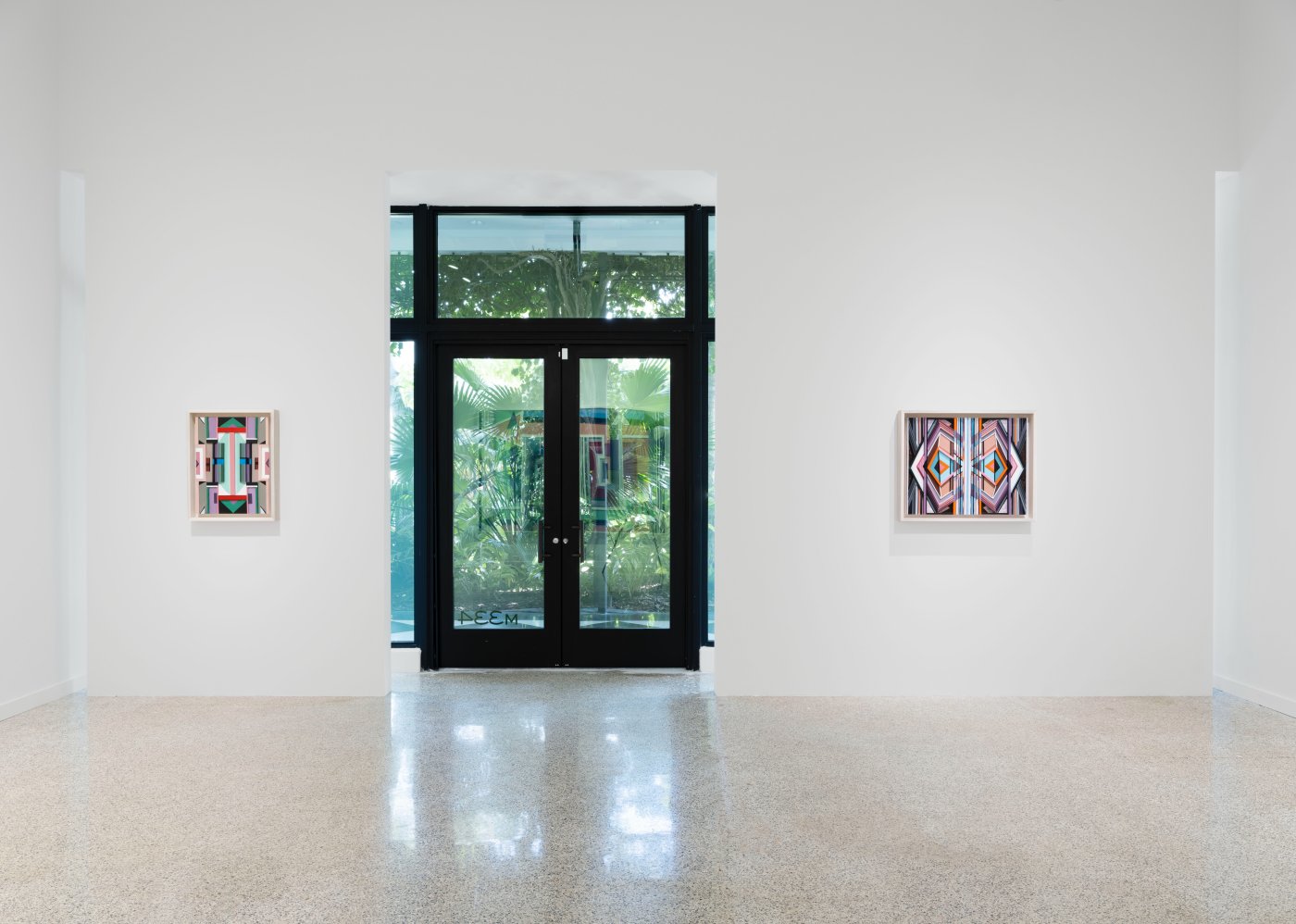 Blending architectural drafting and carpentry with the intuitive identification of portraiture, Carson effortlessly weaves together disparate styles and practices previously deployed over her remarkable career into one — a cross between figuration and abstraction that playfully evokes both Cubism and the Mexican luchador mask. Inspired by the prevalence of masks in the pandemic, and looking in a time of isolation and dissonance for a quasi-social aspect to her creative work, Carson traces her new artistic direction to the early days of quarantine. “I wanted to have colleagues in the studio,” she states, “Figurature is like that.” Making bold choices through fabricative design, the artist strove to evoke the most basic elements of identity and personhood that become present in a face, refining her work through bold and simple colors to arrive at something disarmingly playful and complex.

A touchstone of the exhibition is Carson’s Swinging Door (1997), which, as an early work in her exploration of bas-reliefs, represents a significant contribution to her oeuvre. Working with increasingly complex visual overlays as she developed out of a largely Minimalist background, Swinging Door is limned with smart detail work and sly art-historical references in the form of visual cues — evoking Renaissance realism through its distribution of scale and the artist’s use of depth. Due to the strategic placement of mirrors, it is often considered to be Carson’s first figural work, as the eye-level positioning of these reflective surfaces aims to introduce and enmesh the viewer into the space of the frame.

Carson’s recent creations form a clear through-line to her bas-reliefs of the 90s while appearing more straightforwardly figural and contentedly companionable. Works like Blue Brain and Red and Yellow Face, both 2022, employ into a shallow three-dimensional field the features which Cubism sought to collapse into two — in the process beginning a primal game with the viewer of making faces: recognizing human features and even expressive dispositions in objects as inanimate as clouds, cars or knots of wood.

Encompassing one facet of Carson’s diffuse and inimitable career, Faces and Places clarifies an aspect of her body of work and presents a micro-history of gestural minimalism, while testifying as readily as anything the artist has done to Carson’s protracted and ecstatic exploration of color. Boldly juxtaposing primary and tertiary hues across a picture plane as complex as she sees fit to fabricate, the colors of her bas-relief portraits call up the subjectivity of emotions and the subtlety of skin tones. They, too, serve to situate the works not only in the context of minimalist restraint but as strangely spirited sensibilities and personalities — faces on the wall, which require your noticing them to come alive.

Courtesy of the artist and GAVLAK