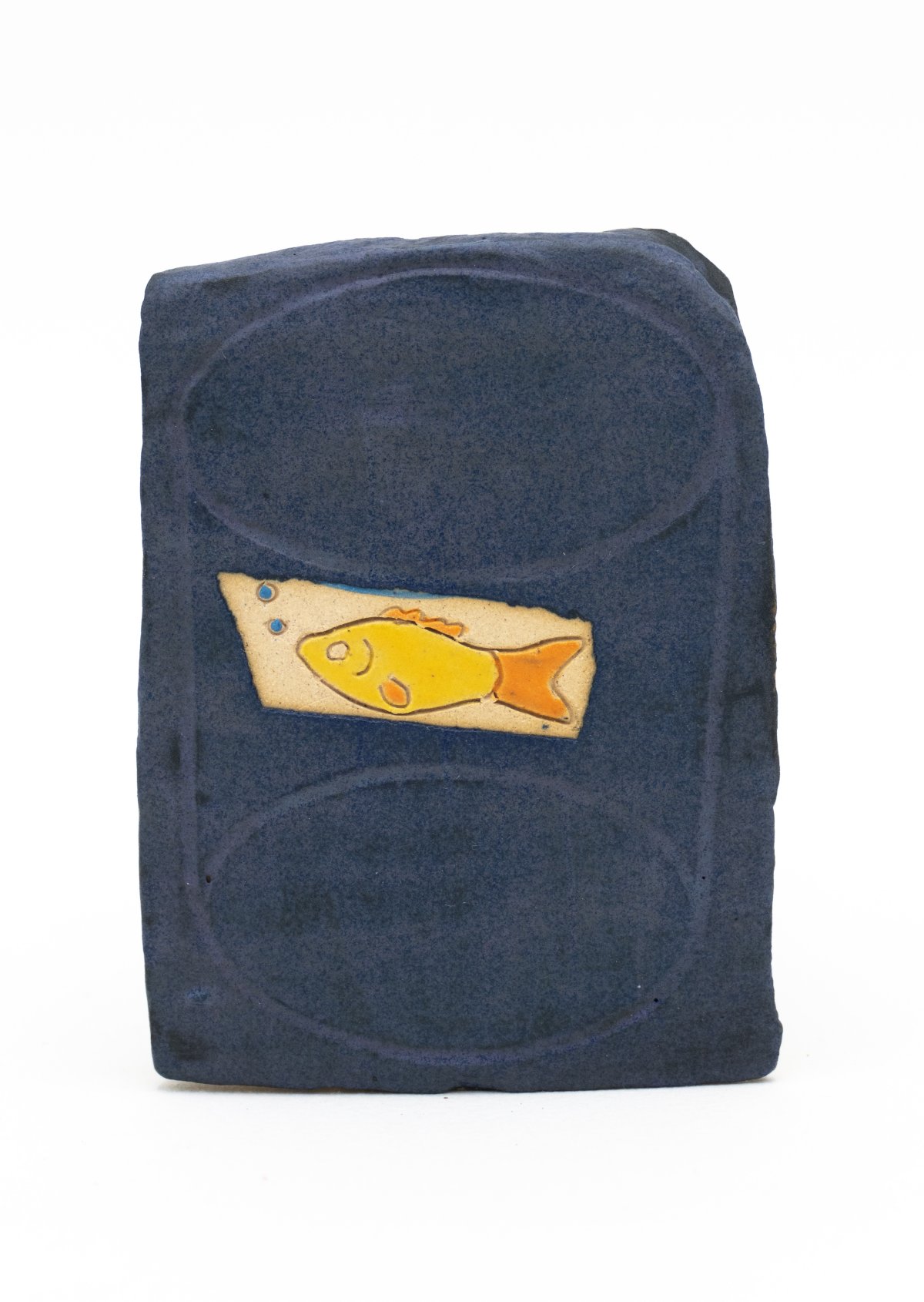 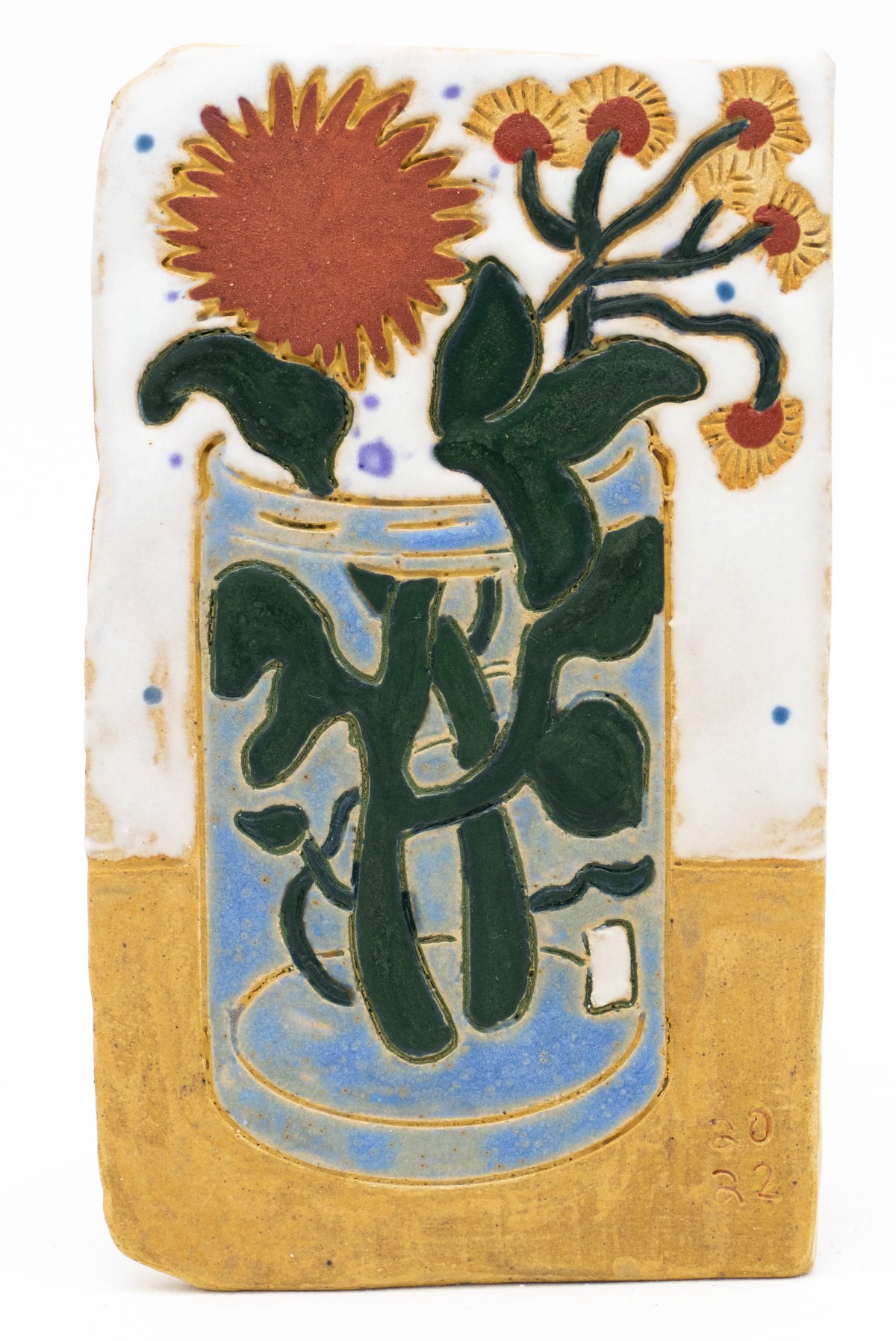 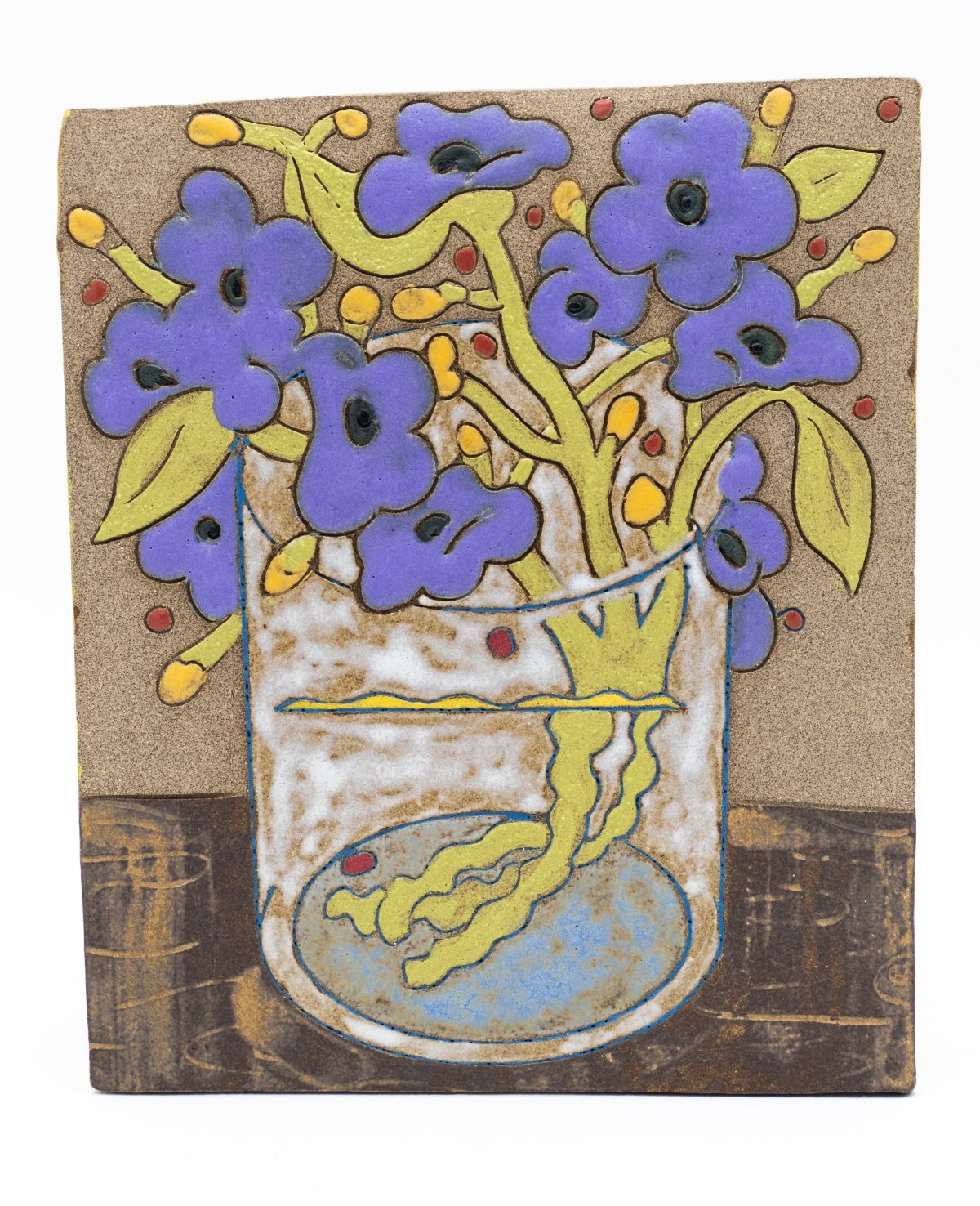 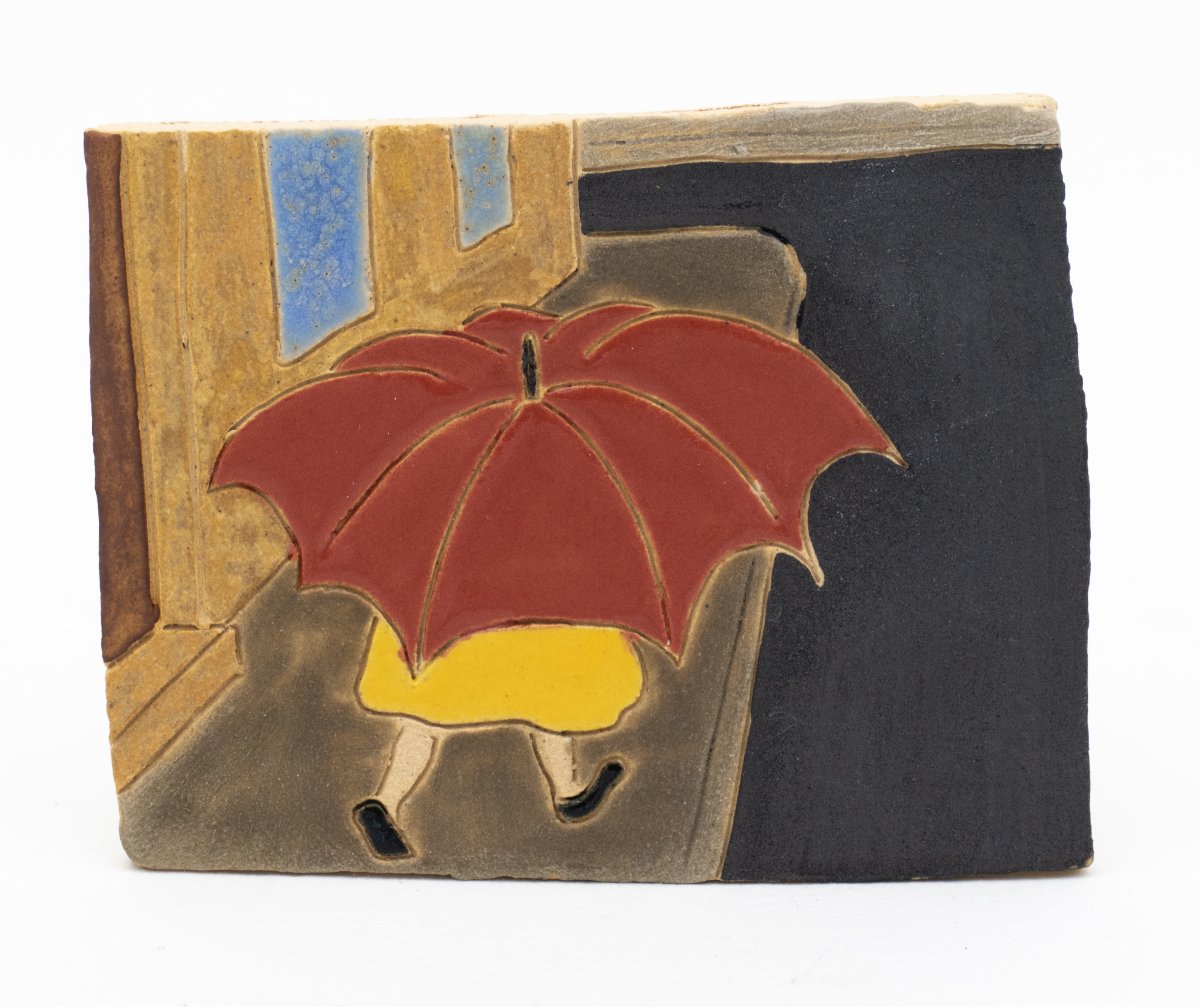 Kevin McNamee-Tweed
Umbrella in the Rain, 2022 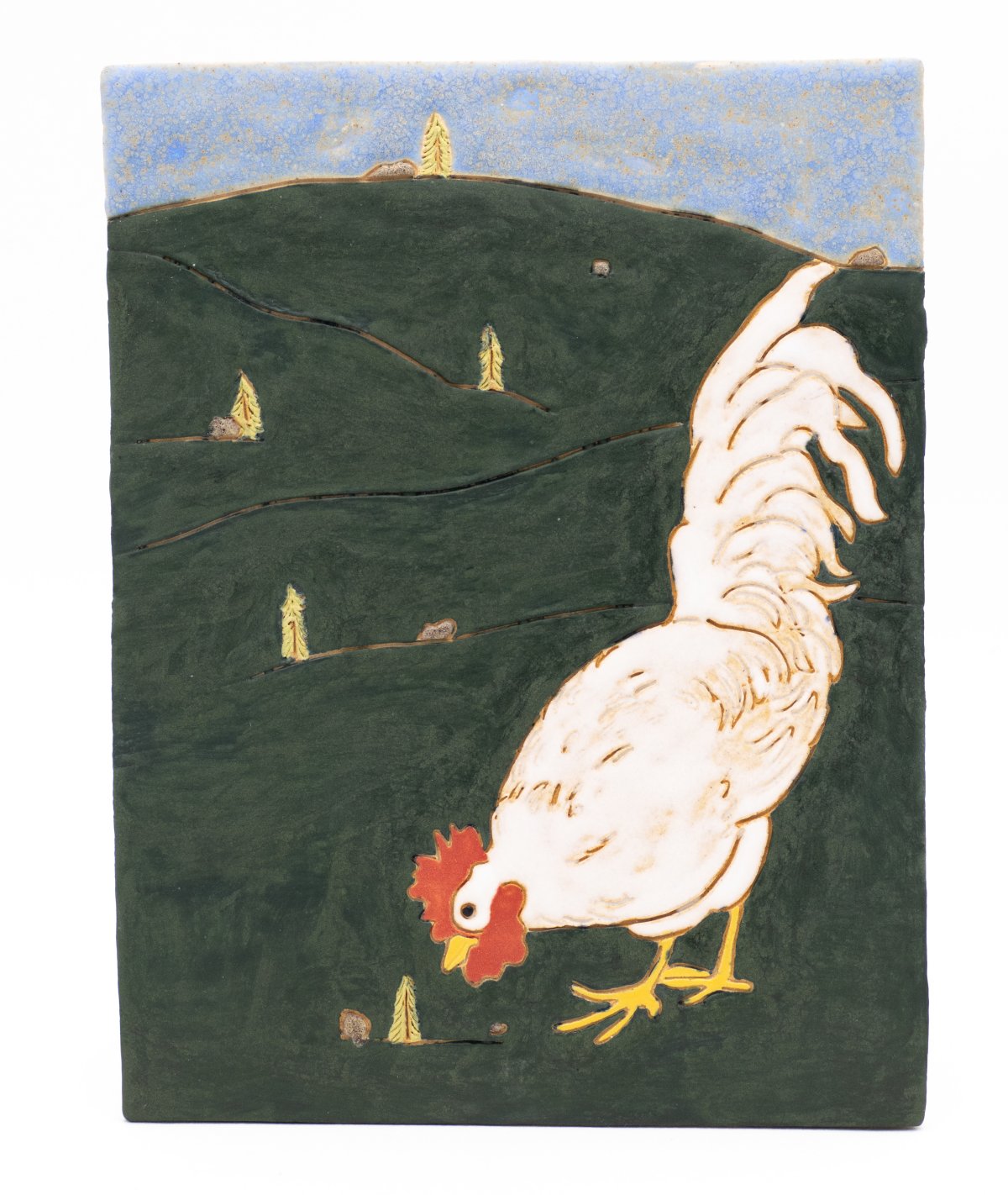 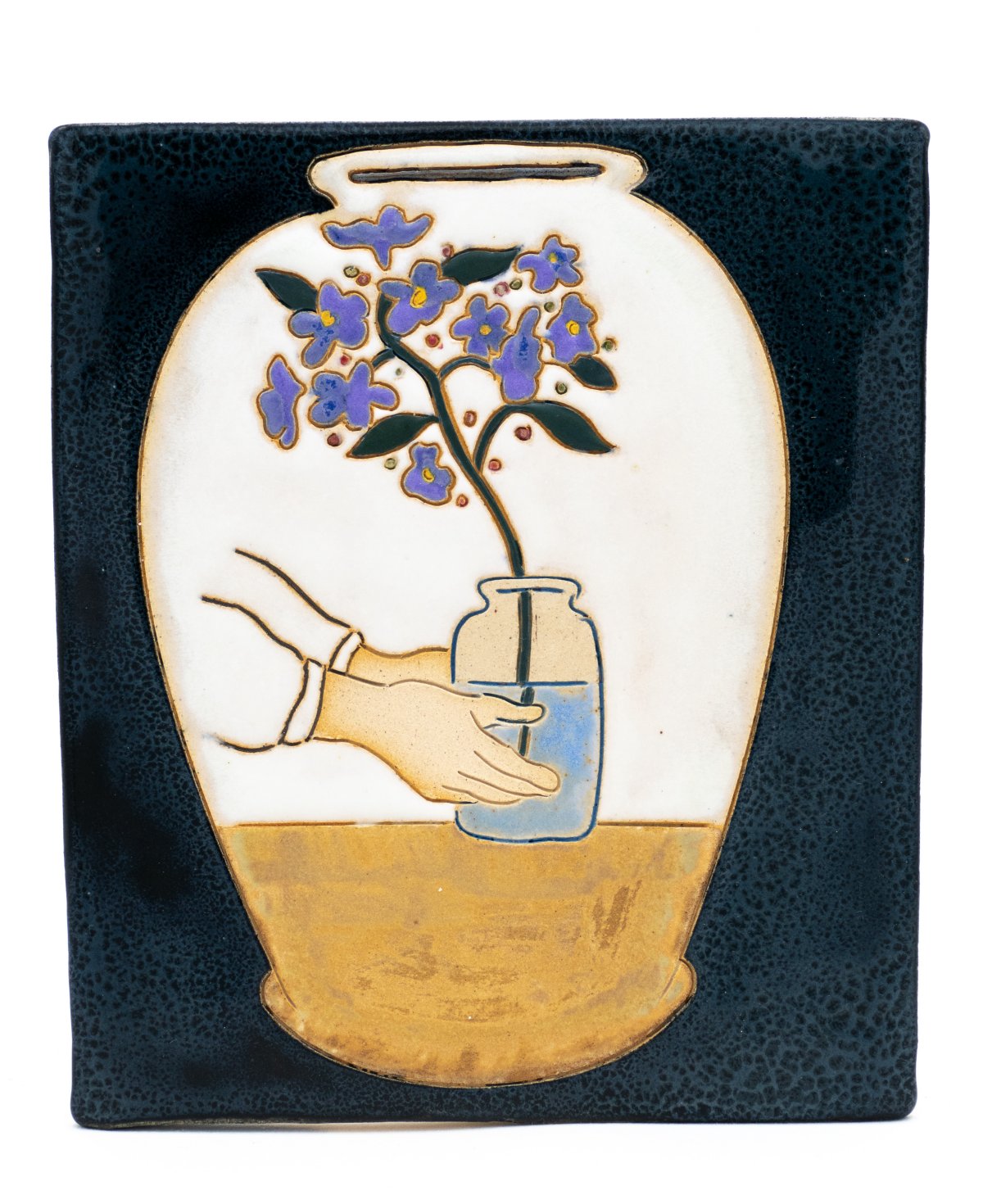 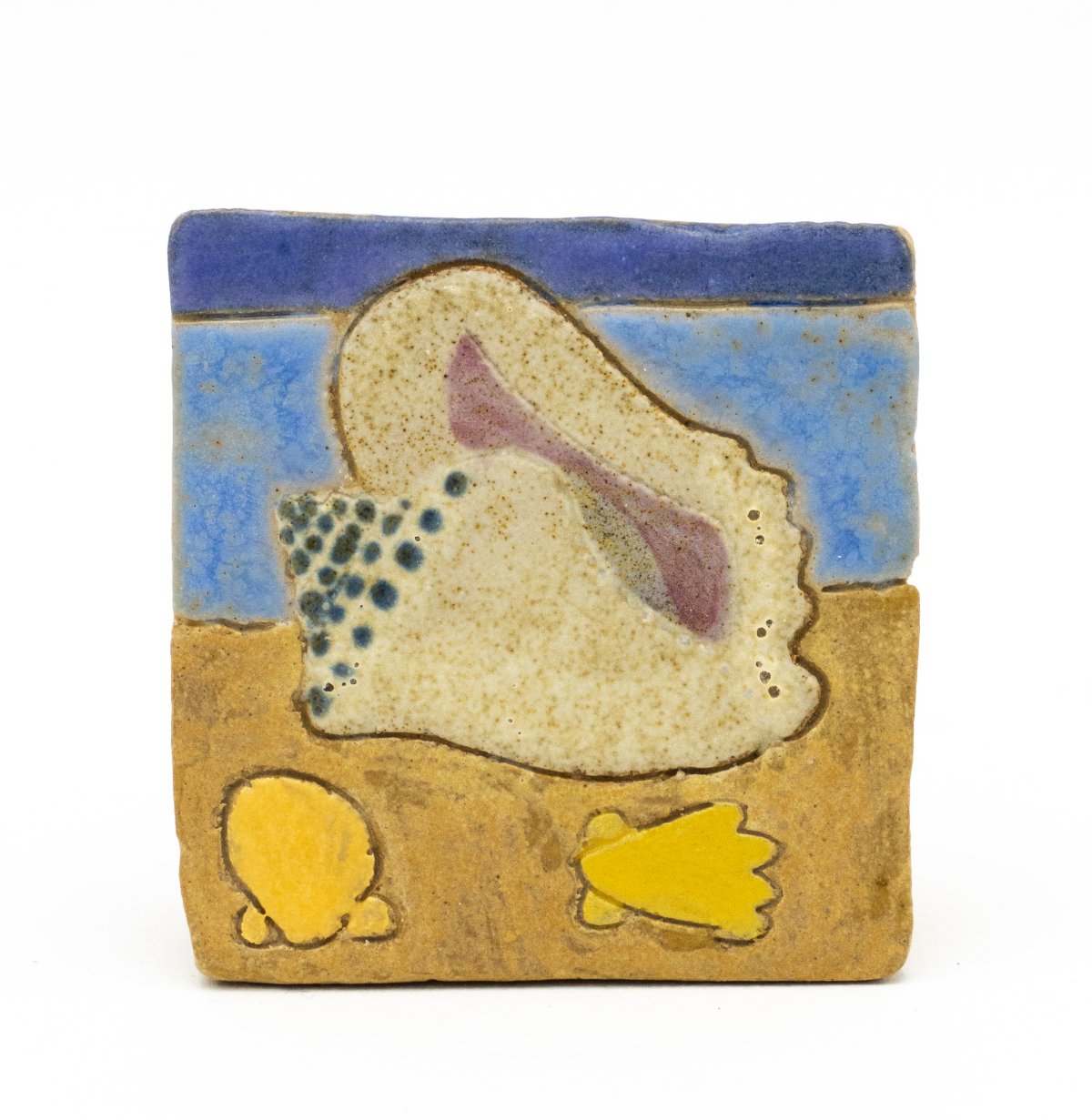 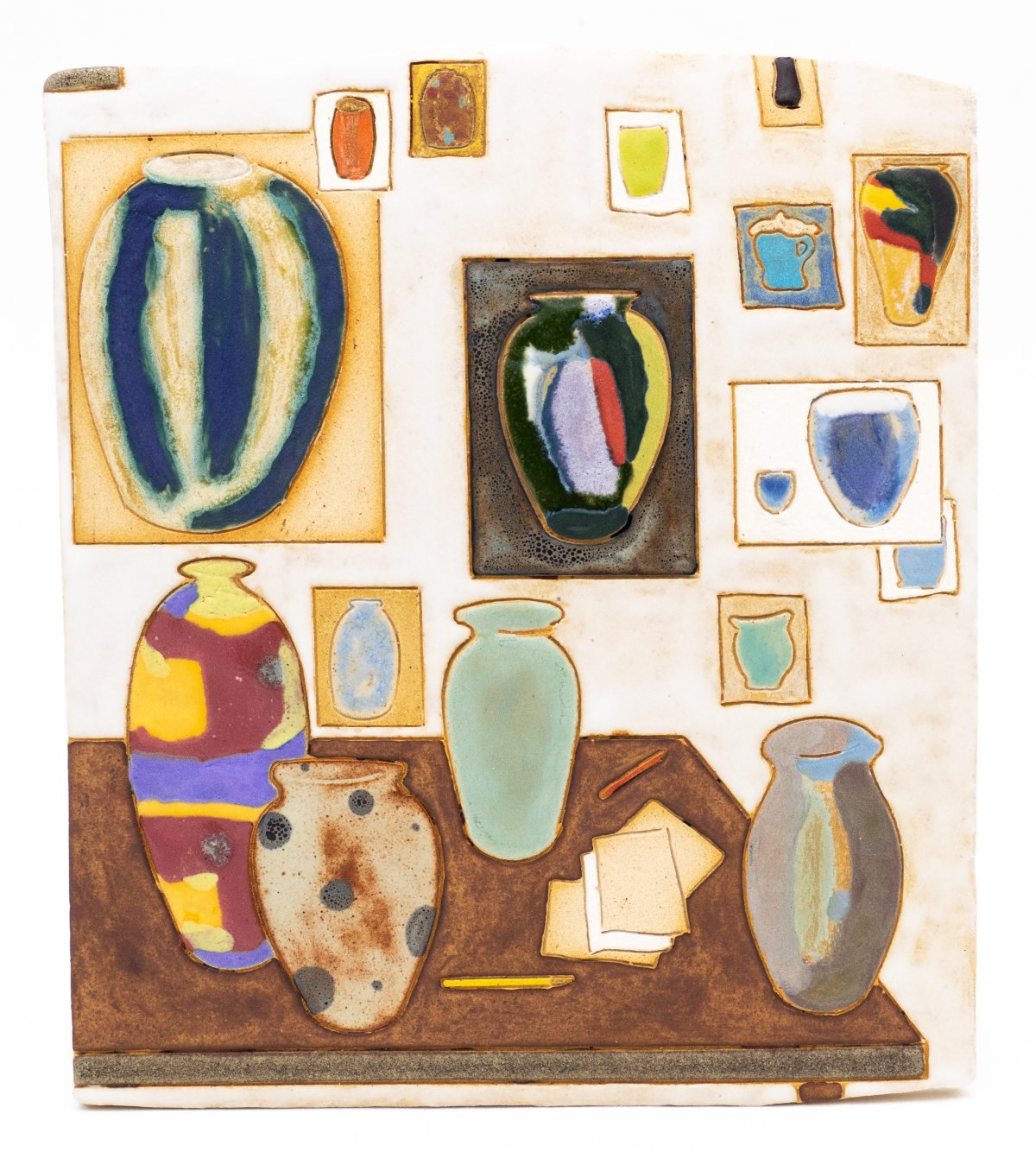 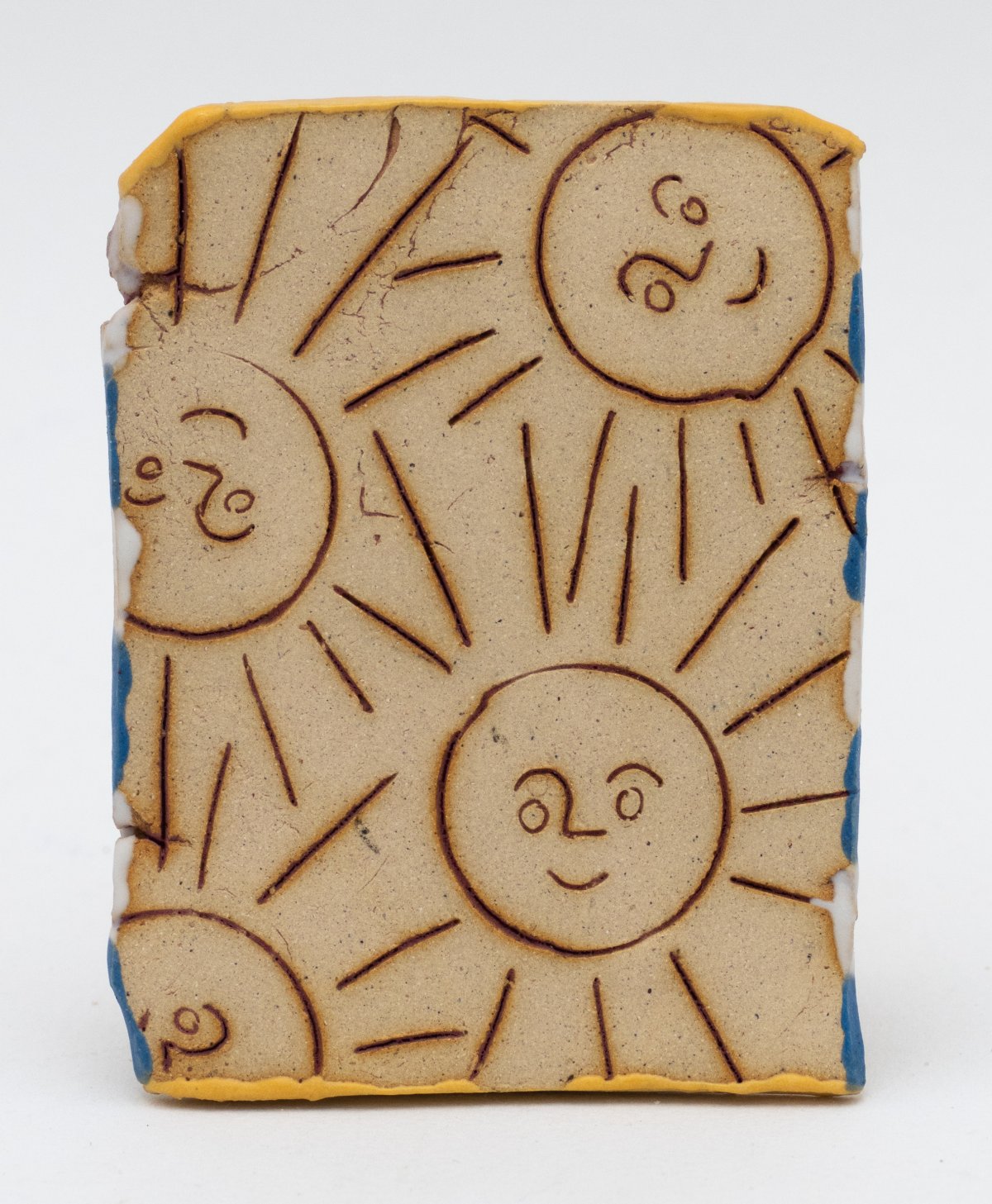 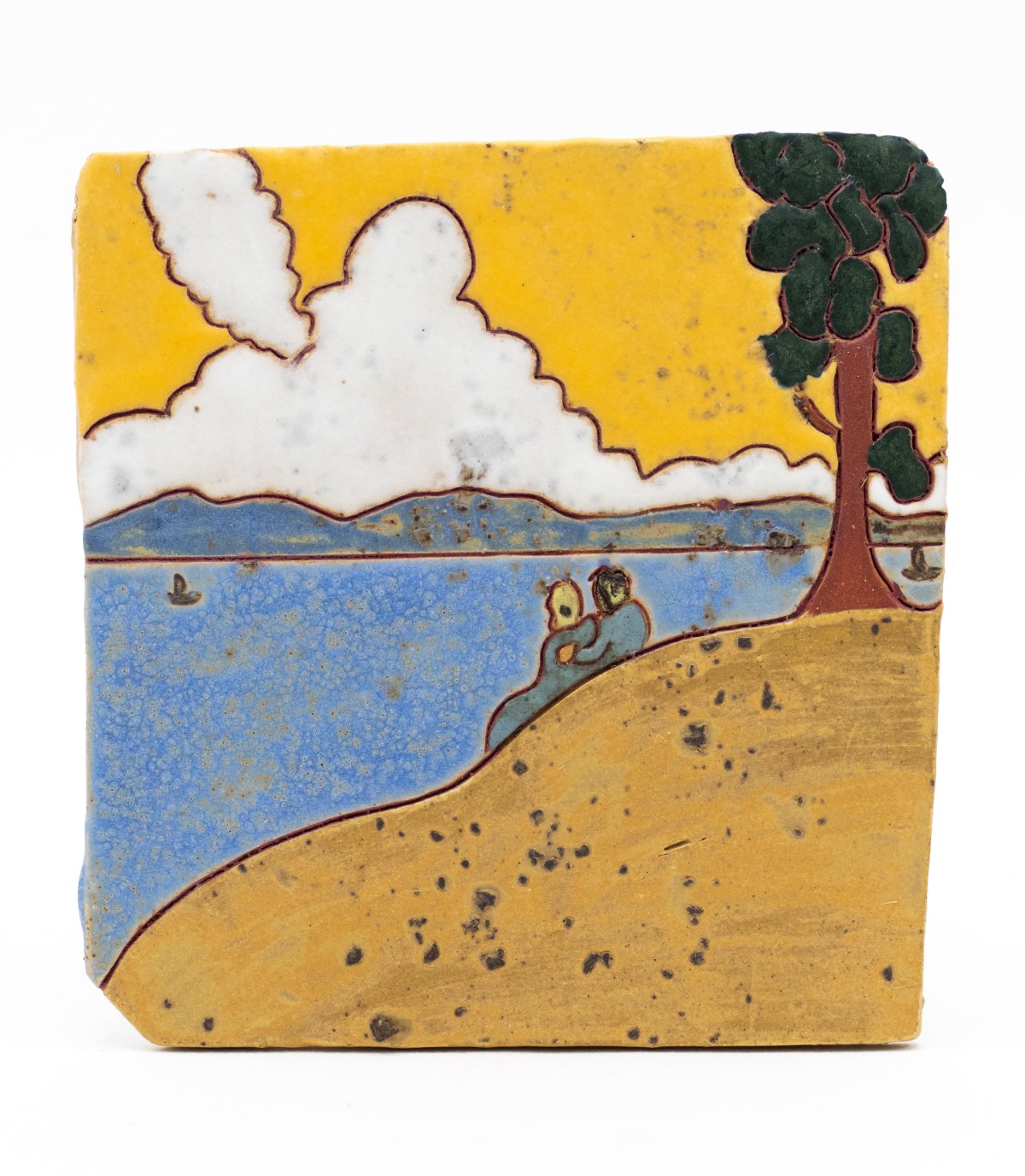 Kevin McNamee-Tweed
Variation on The End, 2022 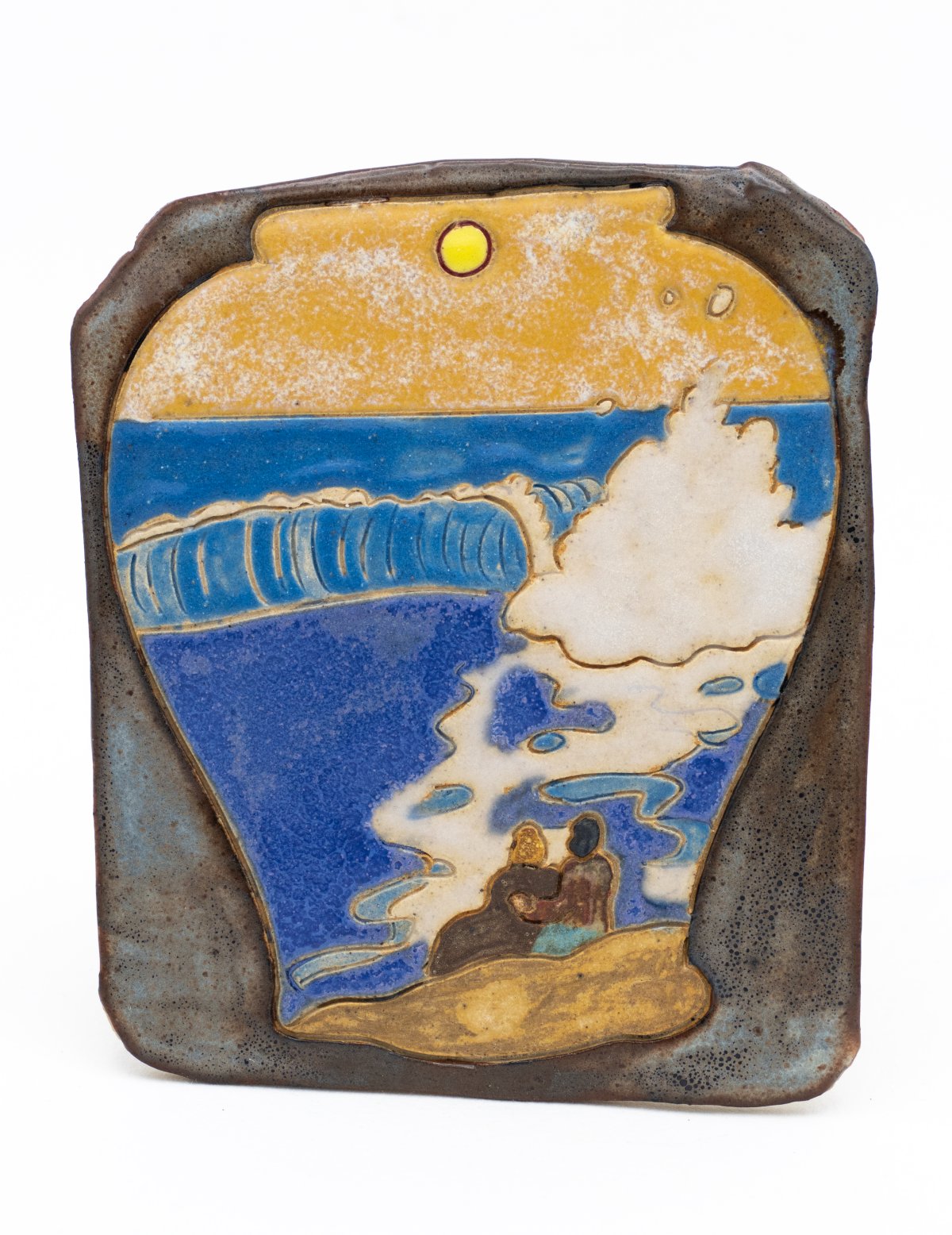 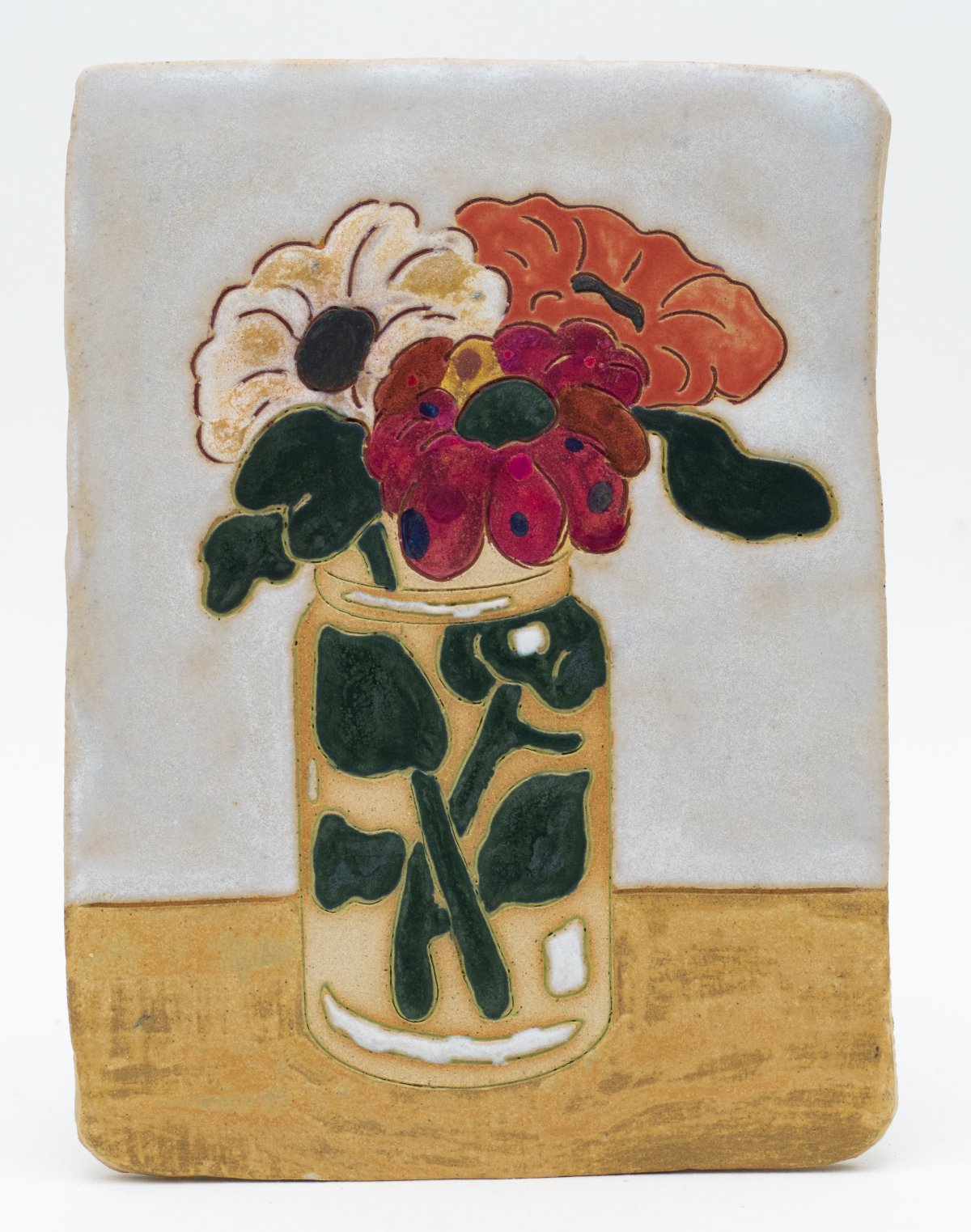 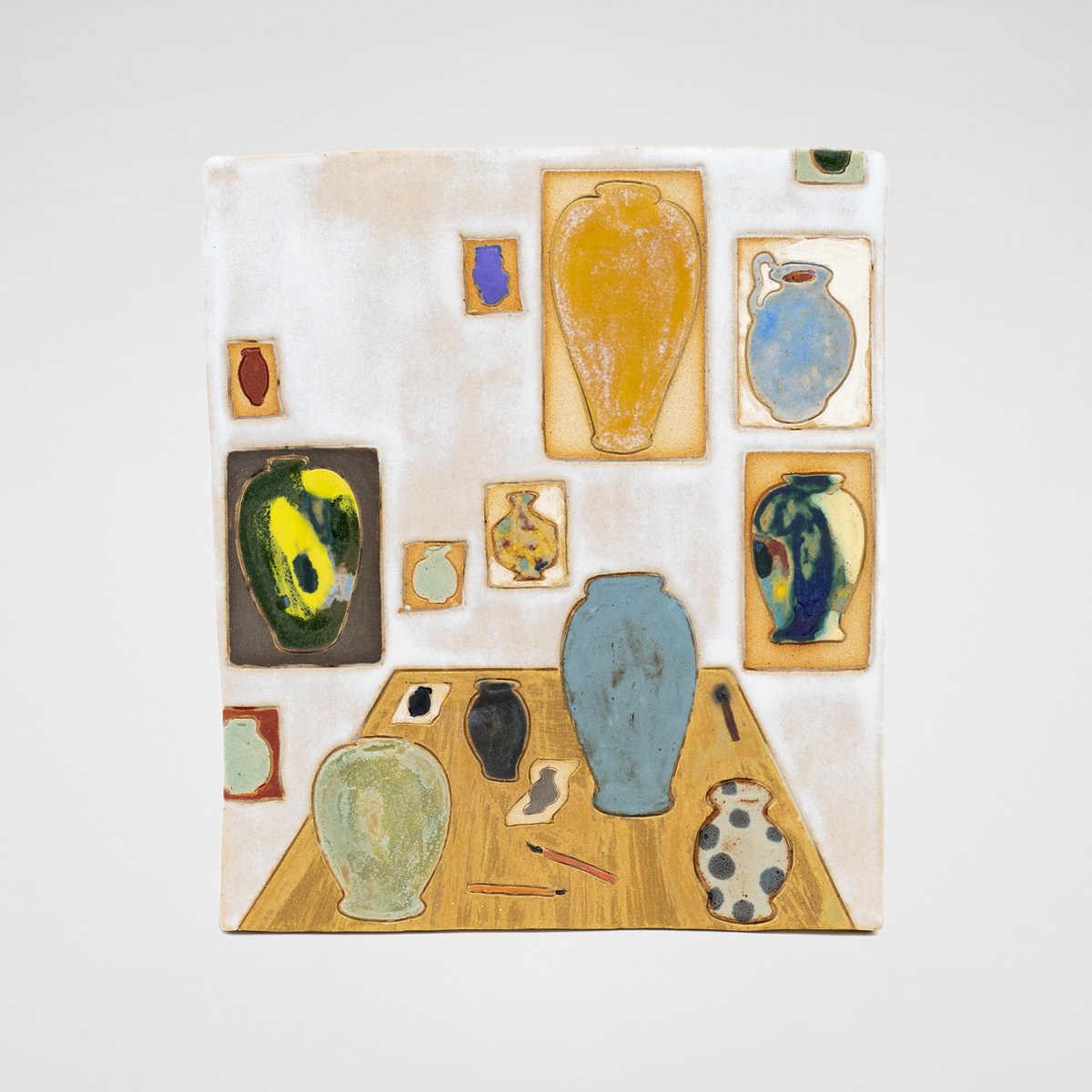 Anchored squarely in the tradition of painting, these wall-hanging works are composed of home-mixed clay bodies and glazes, including materials dug up near the artist’s home in North Carolina, a locality known for its rich clay history. The intimately scaled works depict human, animal and inanimate subjects in tenderly dramatic vignettes. With pathos and humor, they reveal fragments of wider narratives while focusing on moments of existential disquiet, incidental poignancy or confounding delight.

McNamee-Tweed’s current body of work addresses themes including the margins of human civilization, the natural world and everyday objects, while maintaining a self-reflexive attitude to the tradition of image- and object-making. Some of the stoneware slabs in ‘Vessel’ depict ceramic vases with scenes rendered upon them: a mise-en-abyme effect referencing the three-dimensionality most commonly associated with ceramics. McNamee-Tweed also regularly takes the studio itself as a subject: walls and tabletops filled with papers, tools and artworks-in-progress, the objects and images accumulating in candid conversation. The prototypical artist figure (wearing a beret or pensively holding a brush) also makes appears, at once self-aware and unaffected.

The ‘vessel’ of the exhibition’s title points not only to the ceramic pots and vase forms which appear repeatedly in the show, but also to the history and function of the term as a metaphor. One particularly significant allusion is to Ursula K. Le Guin’s 1986 ‘Carrier Bag Theory of Fiction’, which itself drew on anthropologist Elizabeth Fisher’s earlier ‘Carrier Bag Theory of Evolution’: the idea that humanity’s first and most critical technological innovation was not an arrow or a tool for killing, but a carrier bag to transport and keep food. Applying Fisher’s theory to literature, Le Guin argued for a suspicious approach to the ‘techno-heroics’ that have been propagated endlessly throughout human culture. Instead, she wrote in favour of a type of narrative that would not orbit around heroes or conflict or high drama or linear time, but rather hold stories woven into daily life: fragmentary, cyclical and nuanced.

Embracing Le Guin’s accumulative notion of narrative while crafting his own imagery and stories on a precise emotional scale, ‘Vessel’ sees McNamee-Tweed gather personal, grandiose and mundane ruminations, absorbing stylistic tendencies and formal sensibilities from the art-historical to the commonplace. Combining meticulous technique and controlled processes with a restless spirit of experimentation, McNamee-Tweed reflects on the mechanics of meaning-making and storytelling while celebrating the surfaces, textures, and material depth possible only with clay, glaze and their alchemical processes.

The artist notes that this exhibition’s title occurred to him after recently re-reading Le Guin’s text, which, in a stroke of narrative congruency, he first came across while on a trip to London some years ago, having purchased at a bookshop in Brick Lane a chapbook copy of ‘Carrier Bag of Theory of Fiction’ that was permanently marked by a greasy samosa at the bottom of a tote bag.