Leonor Antunes: the homemaker and her domain, IV

Leonor Antunes: the homemaker and her domain, IV


Taka Ishii Gallery presents new and recent works by Portuguese artist Leonor Antunes. This exhibition marks Antunes’ first solo exhibition with the gallery and features both new works and works created between 2017 and 2021 that have been remade specifically for the show. It runs concurrent to her exhibition at the Aichi Triennale 2022, which features the entirety of “the homemaker and her domain,” originally exhibited in Paris. 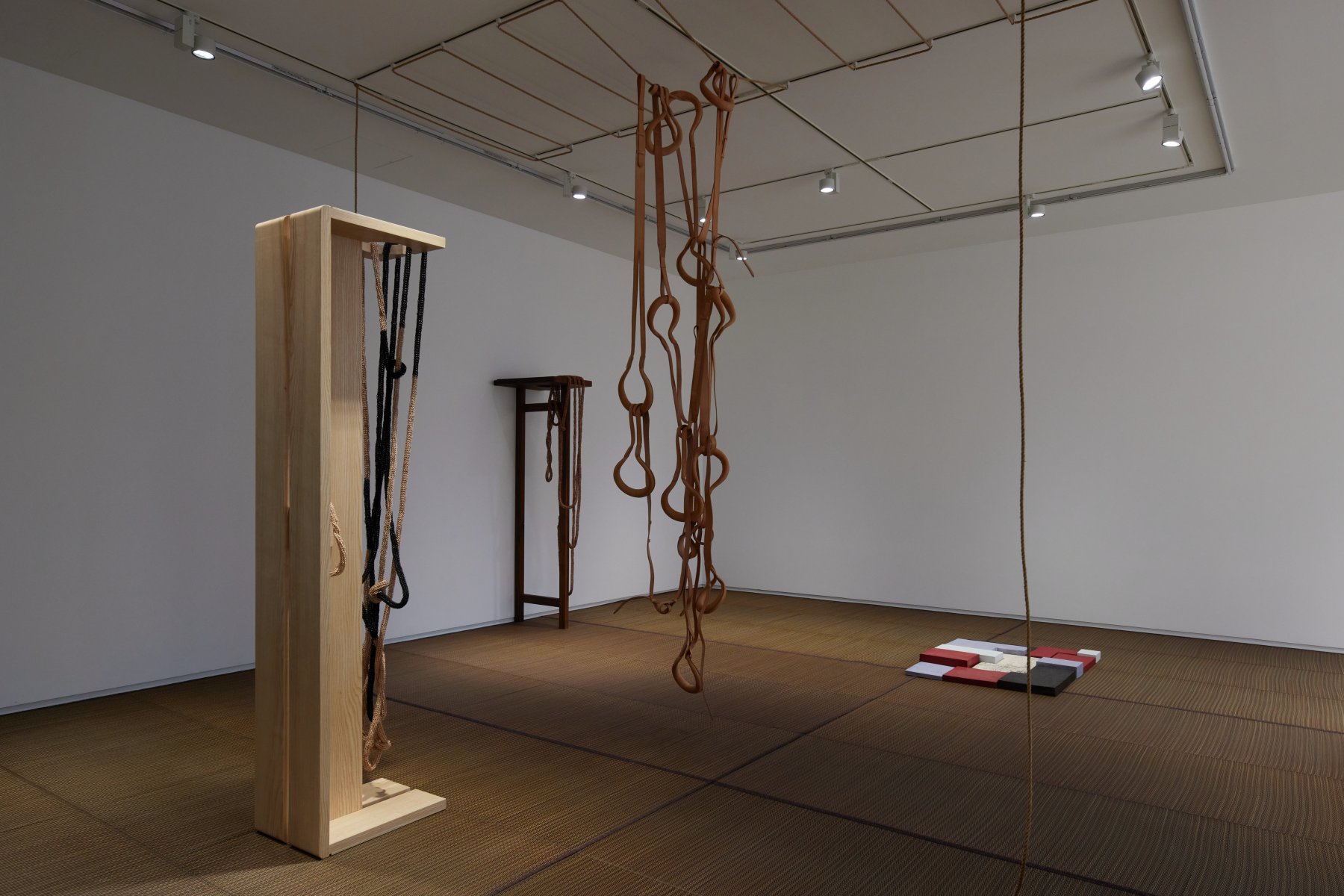 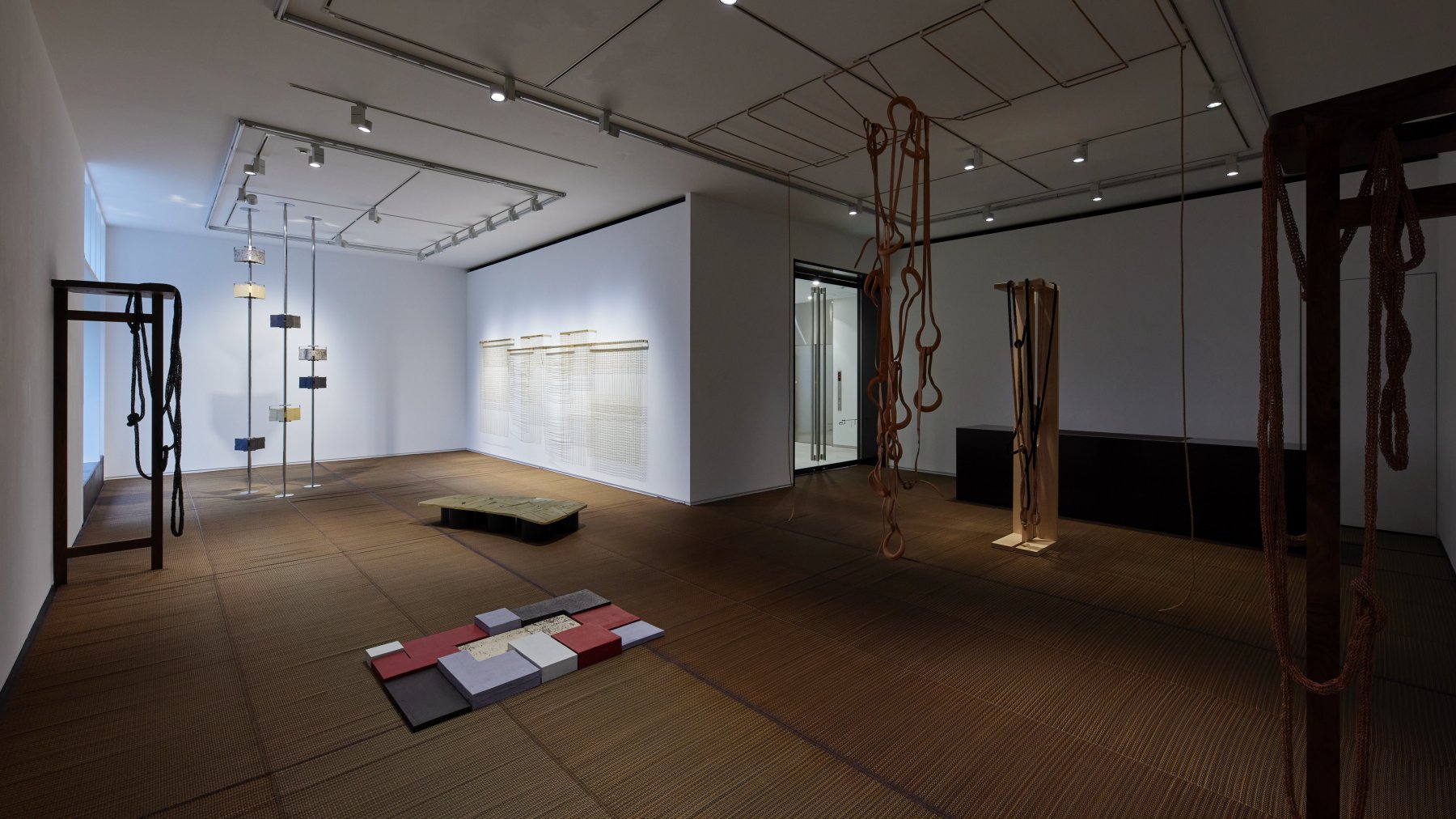 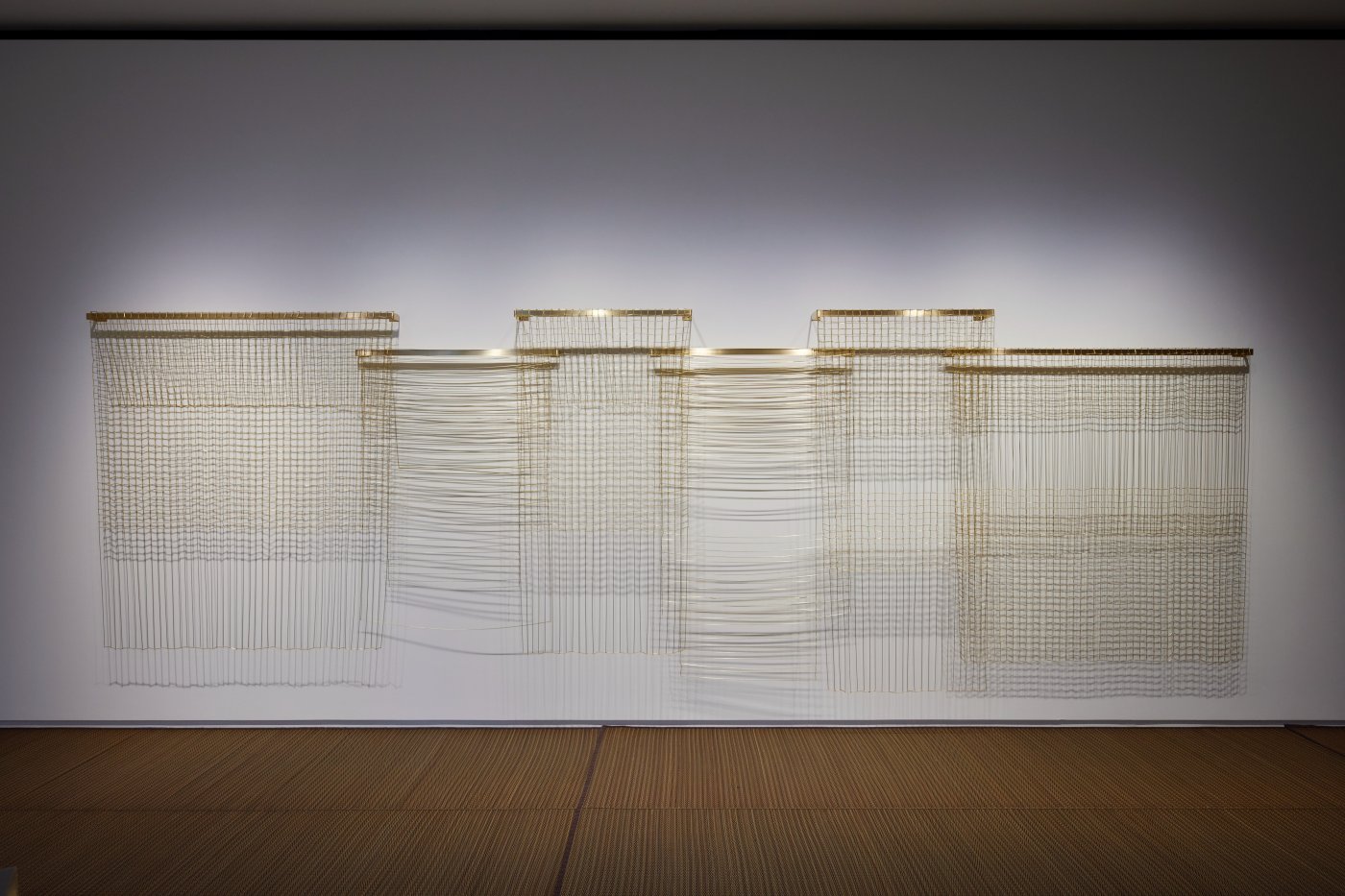 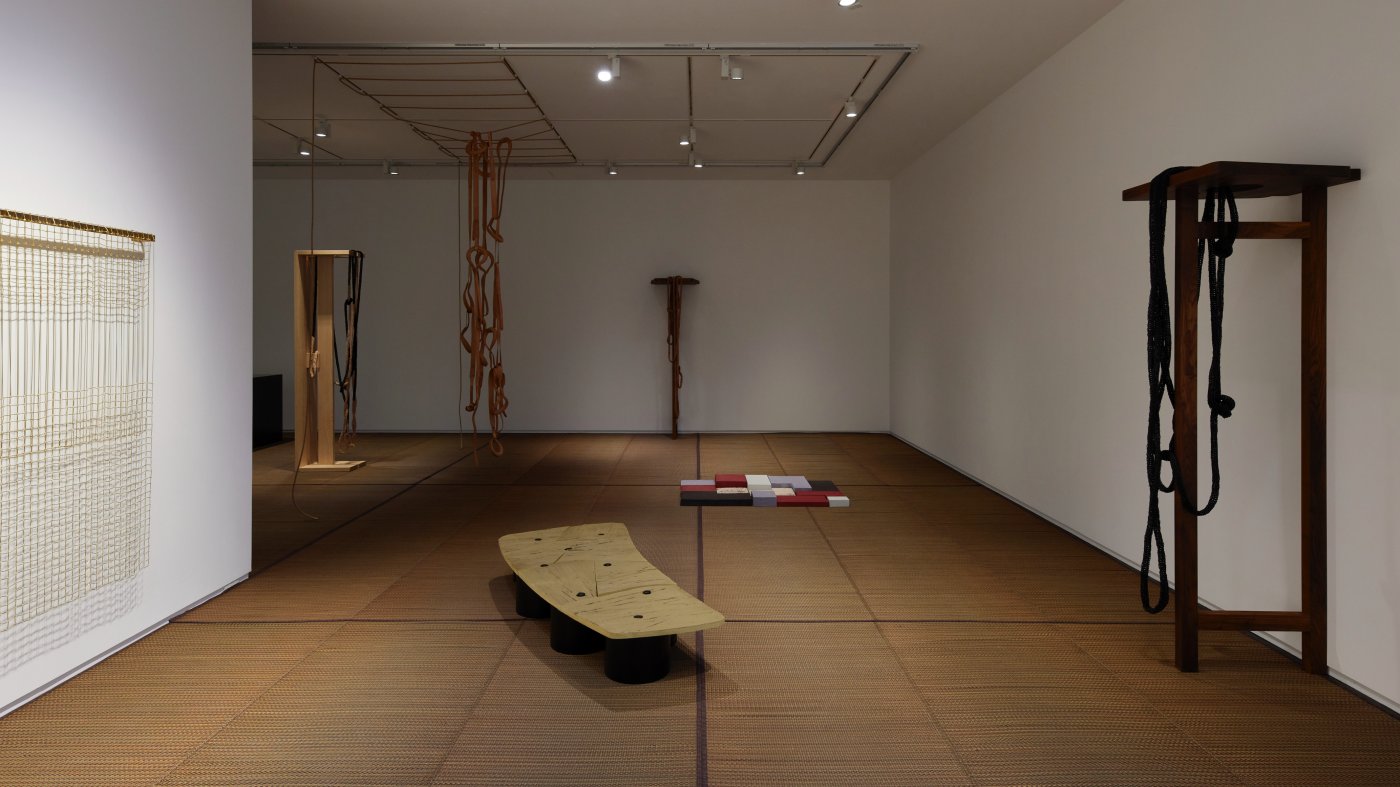 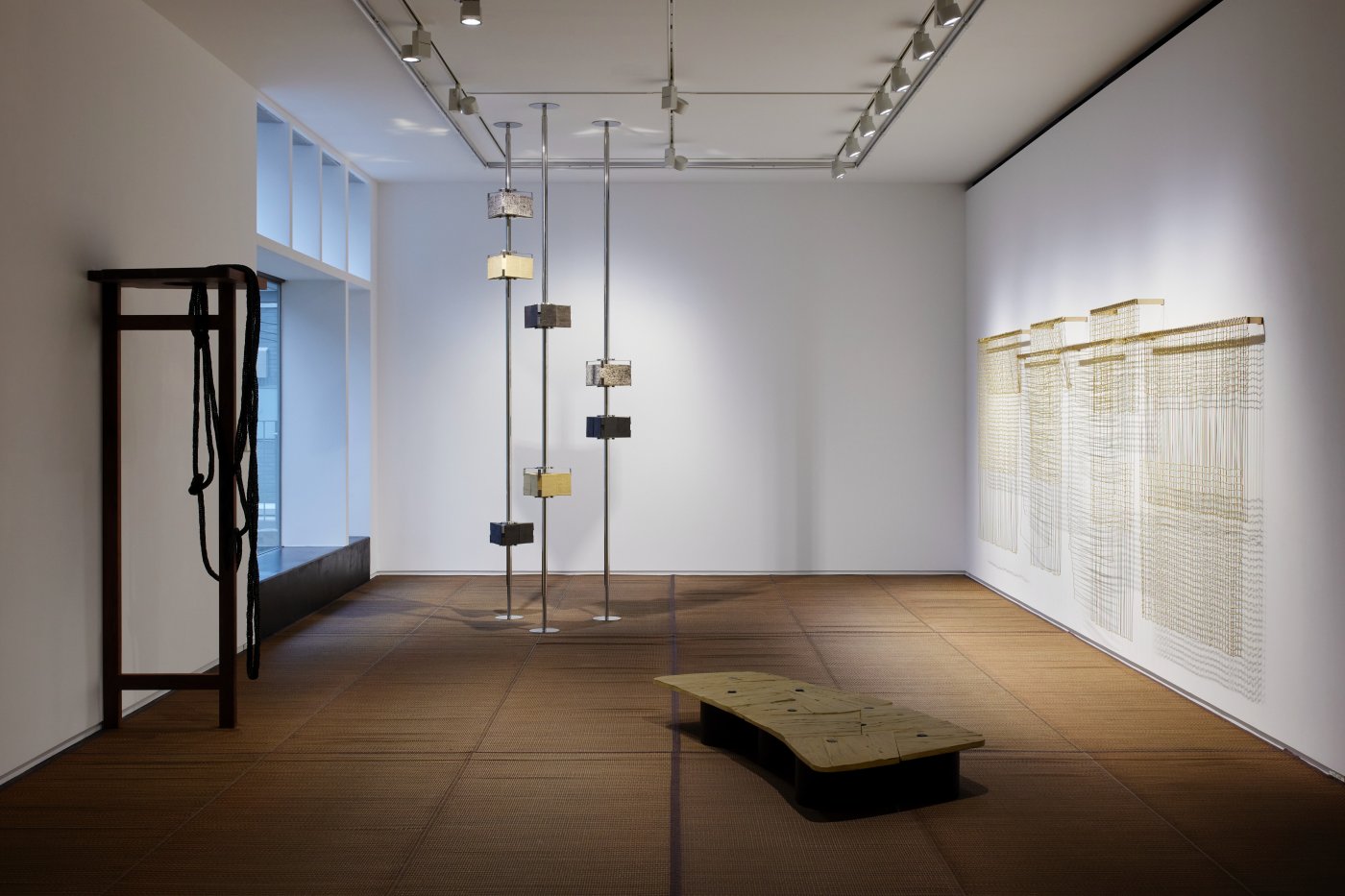 Composed of the ceramic installation, “indirect lighting, group 2,” and works from her “Charlotte” series and new works, “Michiko” and “Michiko 2,” Antunes’ works remake the white cube space into a homemaker’s domain. Influenced by the lives of designers Charlotte Perriand (1903-99) and Michiko Yamawaki (1910- 2000), the “Charlotte” and “Michiko” sculptures take their foundational cues from works by their namesakes, such as a fabric pattern, and then become sculptures with multidimensional sources of context. Antunes also continues to change these works according to the exhibition environment, with the plants originally adorning “Charlotte I,” “Charlotte II,” and “Charlotte III,” being exchanged for ropes she has made herself for the Taka Ishii Gallery exhibition. The ropes will mimic the organic shape of plants and as originally intended for the plants, necessitate a level of care for the material itself.

Both women had significant relationships with Japan and Europe, spending years abroad to study and produce works in completely new environments. Perriand, an already established architect and designer in Paris, left for Japan after the German occupation of Paris in 1940 as an official advisor for industrial design to the Ministry for Trade and Industry. Michiko Yamawaki, the daughter of an esteemed tea ceremony master, moved to Germany when her husband, Iwao, enrolled at the Bauhaus. Yamawaki then decided to enroll and study weaving.

The work and the personal lives of these two designers, particularly during these migratory “lost in translation” moments and the misunderstandings and misrepresentations of their art work, act as seminal references in Antunes’ practice. Her sculptures are built upon these references, the site of each exhibition, local methods of craft, and the heritage of modern traditions. Her work begins by measuring features of architecture and design that interest her. She then uses these measurements as units which can be translated into sculpture. Embracing traditional craftsmanship from around the world, she employs materials such as rope, leather, cork, wood, brass, and rubber to create unusual forms. Through the creation of these unique spaces, Antunes allows the audience a multiple vantage points with which to view history, architecture, and art.

Leonor Antunes was born in Lisbon, Portugal in 1972. She currently lives and works in Berlin. She graduated from the Faculty of Art at the University of Lisbon with a Bachelor’s degree in Visual Arts and Sculpture and subsequently continued her studies at Staatliche Akademie der Bildenden Künste Karlsruhe. Her recent solo exhibitions include MUDAM Luxembourg, Luxembourg (2020); MASP, São Paulo (2019); Museo Tamayo, Mexico City (2018); Pirelli HangarBicocca, Milan (2018); Whitechapel Gallery, London (2017); SFMOMA San Francisco Museum of Modern Art, California (2016). Antunes represented the Portuguese Pavilion at the Venice Biennale, Italy in 2019 and she has also participated in numerous international exhibitions including the 57th Venice Biennale (2017); the 12th Sharjah Biennial (2015) and the 8th Berlin Biennale (2014).