David Richard Gallery is pleased to present New York artist Li Trincere and her newest body of work, Painting Zero, in her third solo exhibition with the Gallery. This new series of hard-edge paintings was created during the Covid pandemic and confinement to her studio in 2021 with the help of a grant from the Pollock-Krasner Foundation. 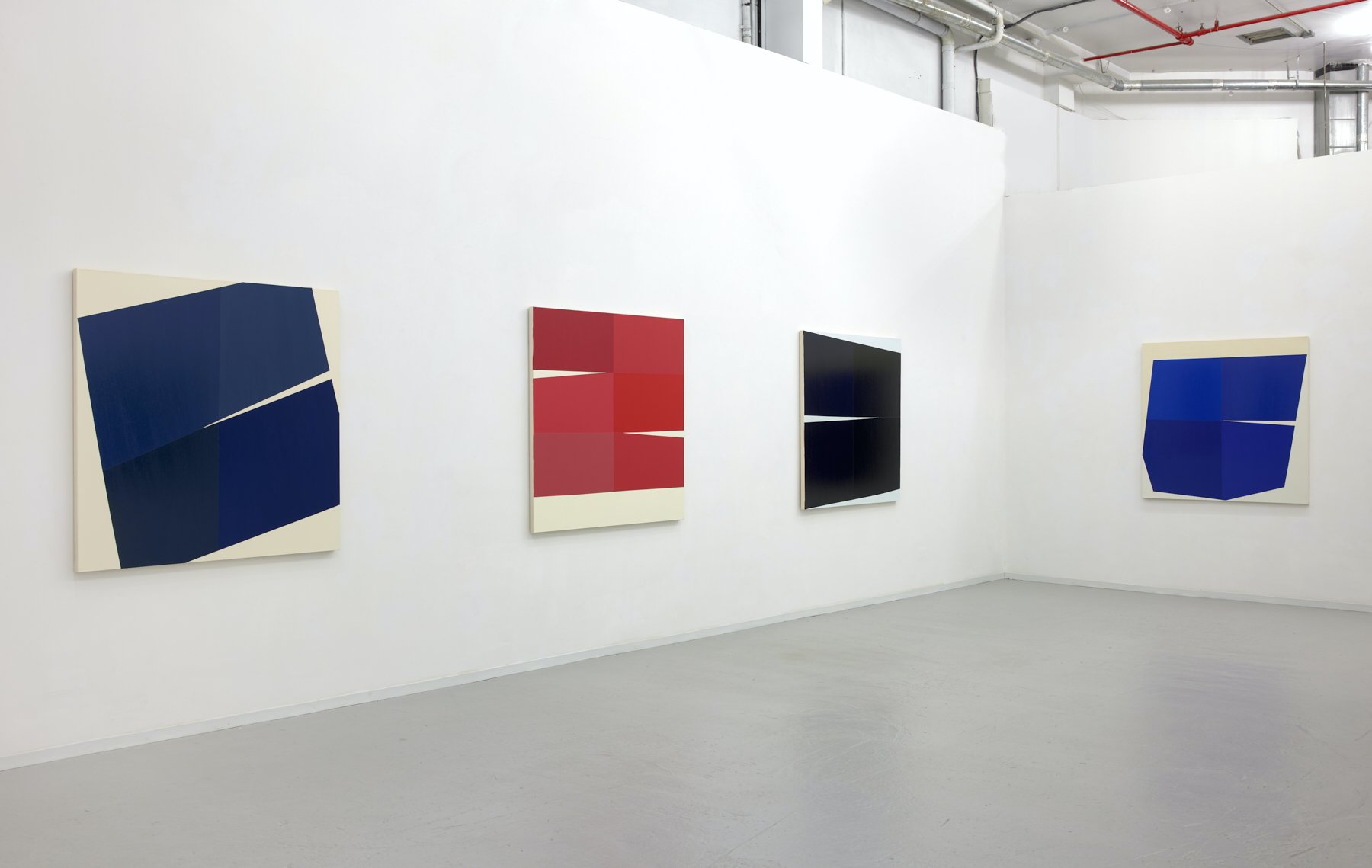 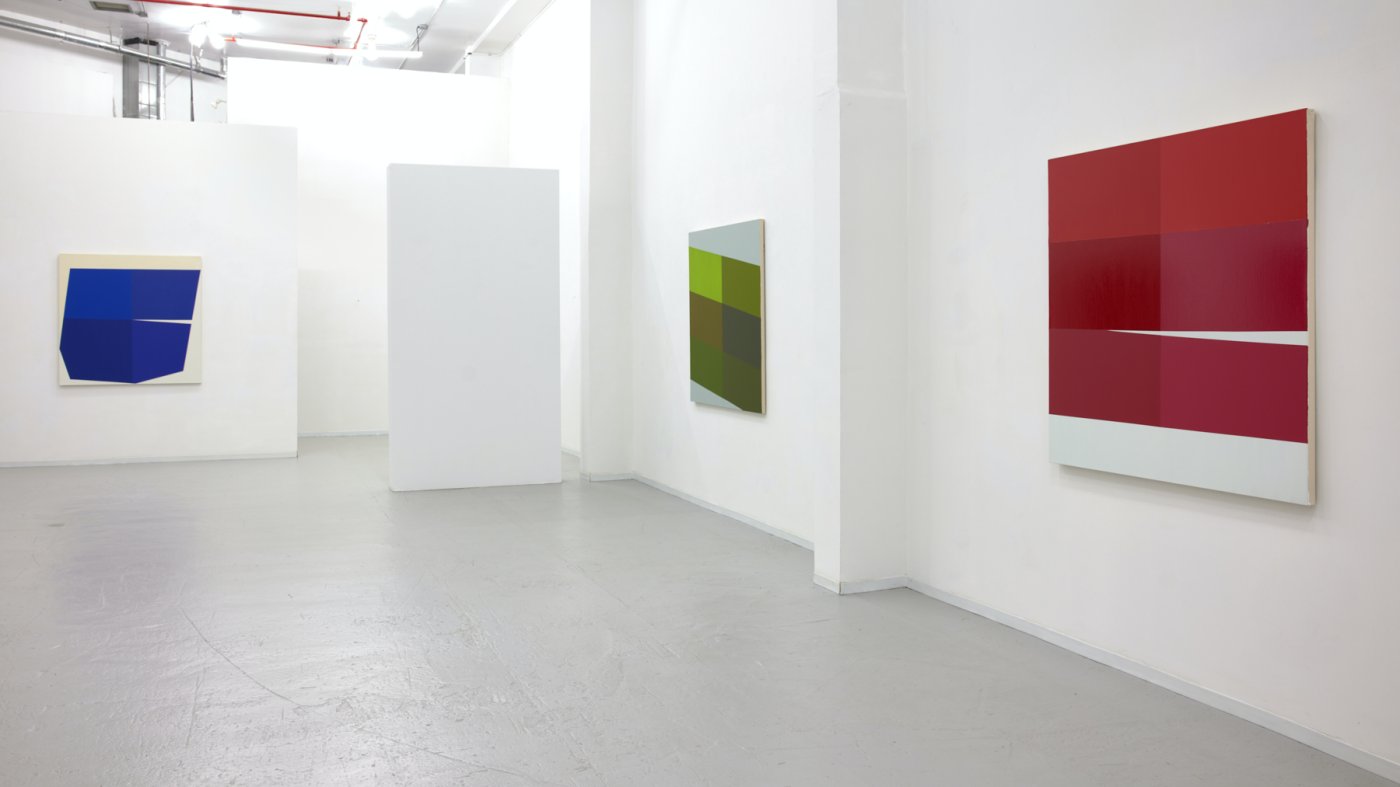 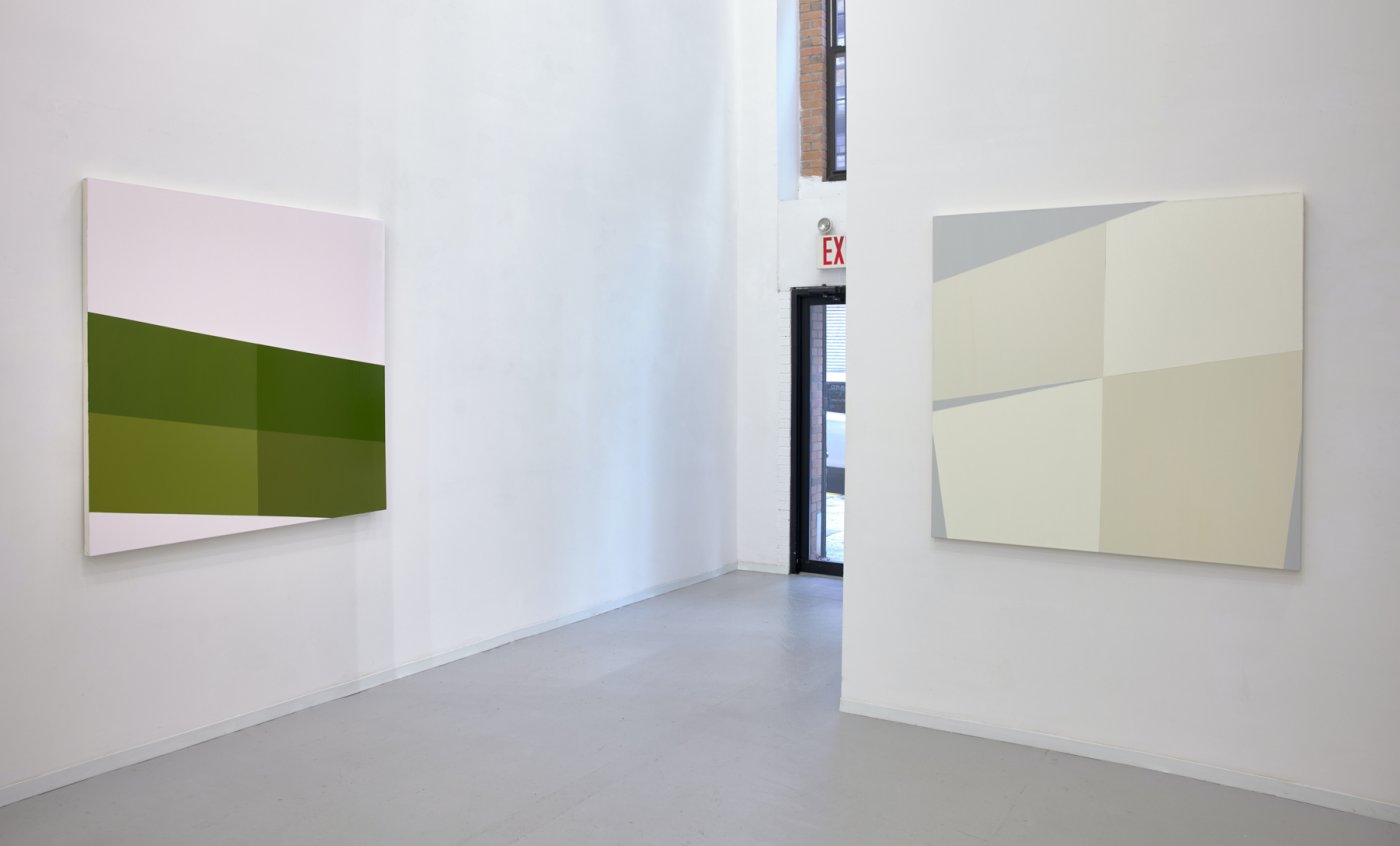 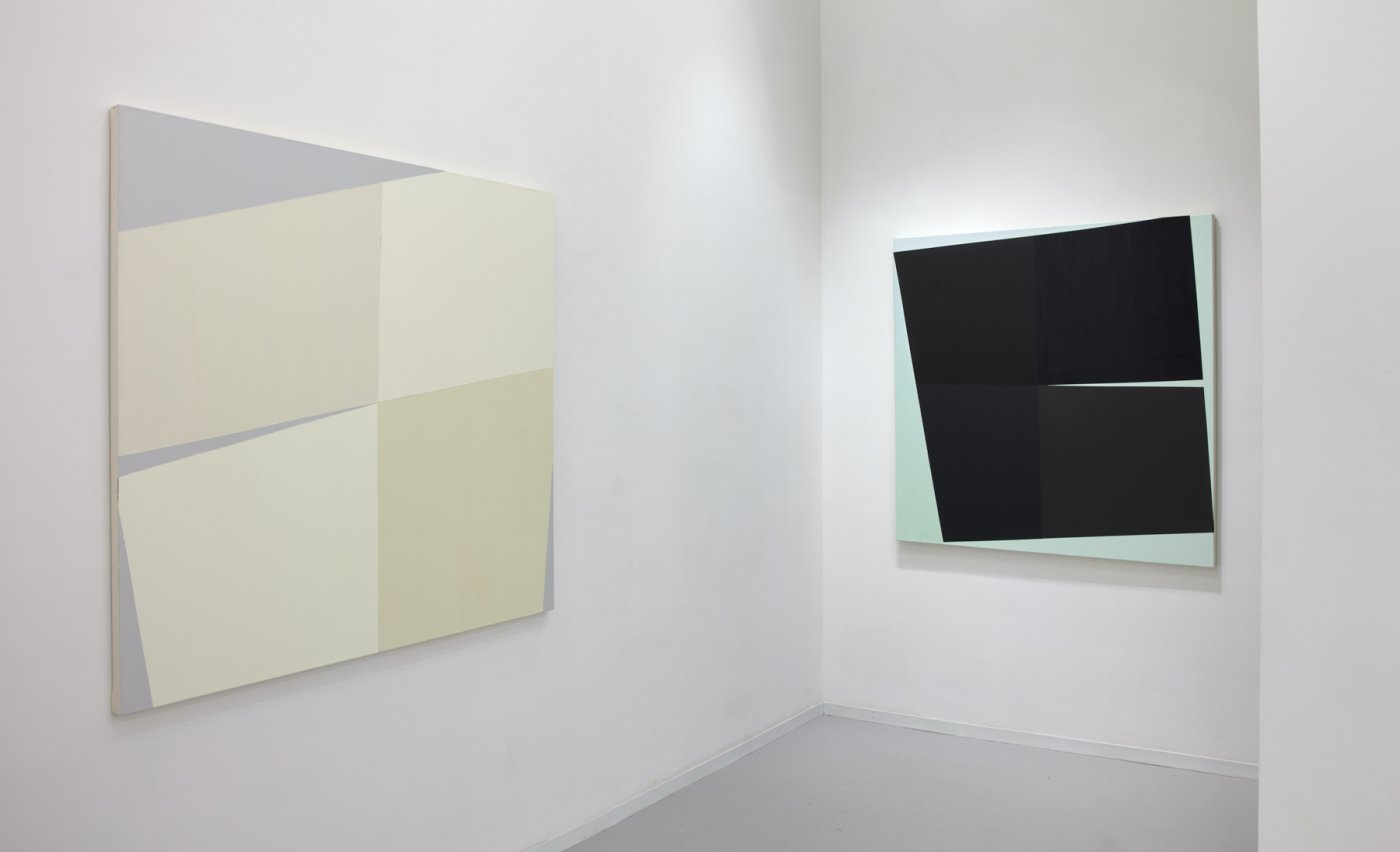 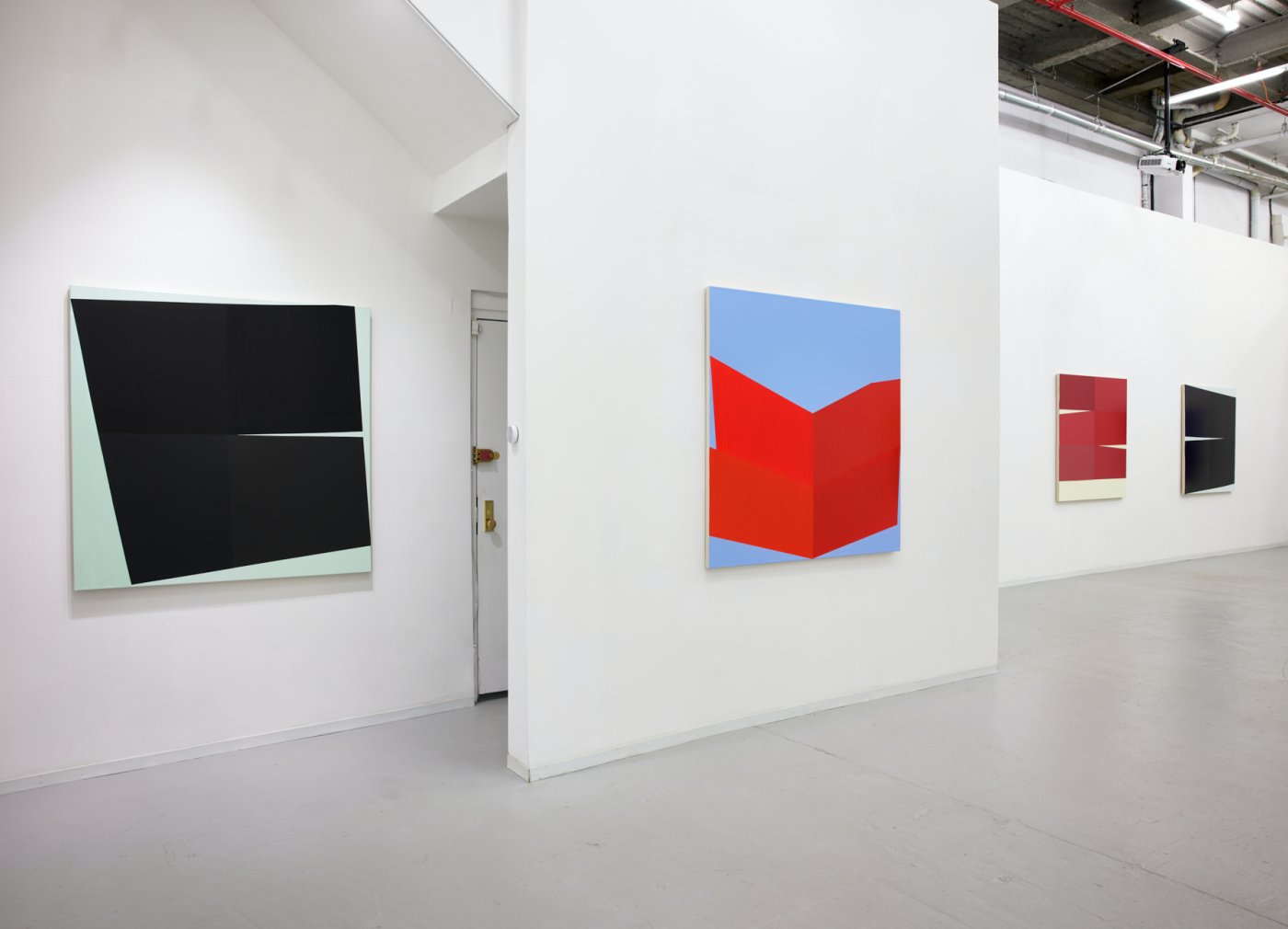 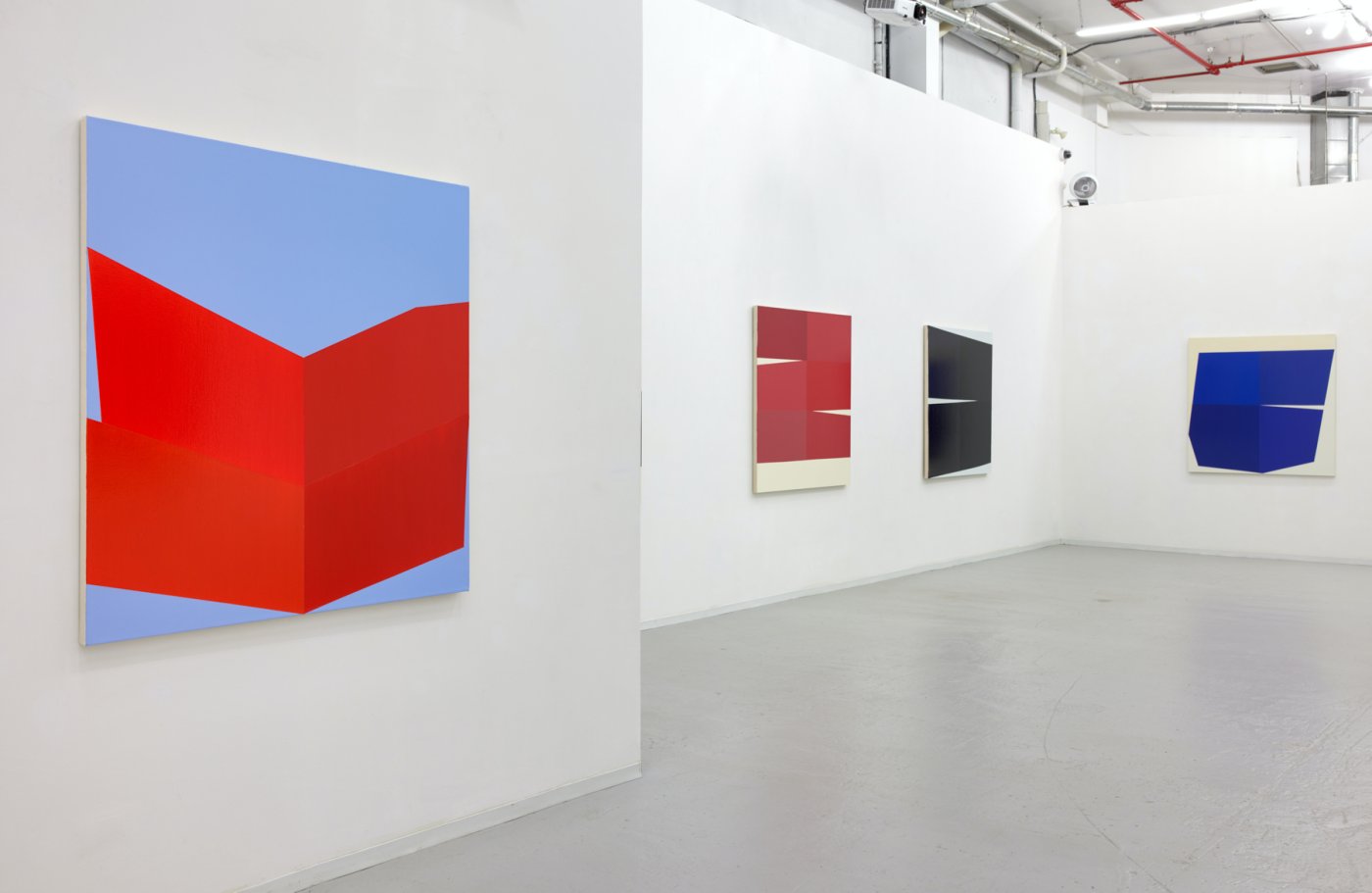 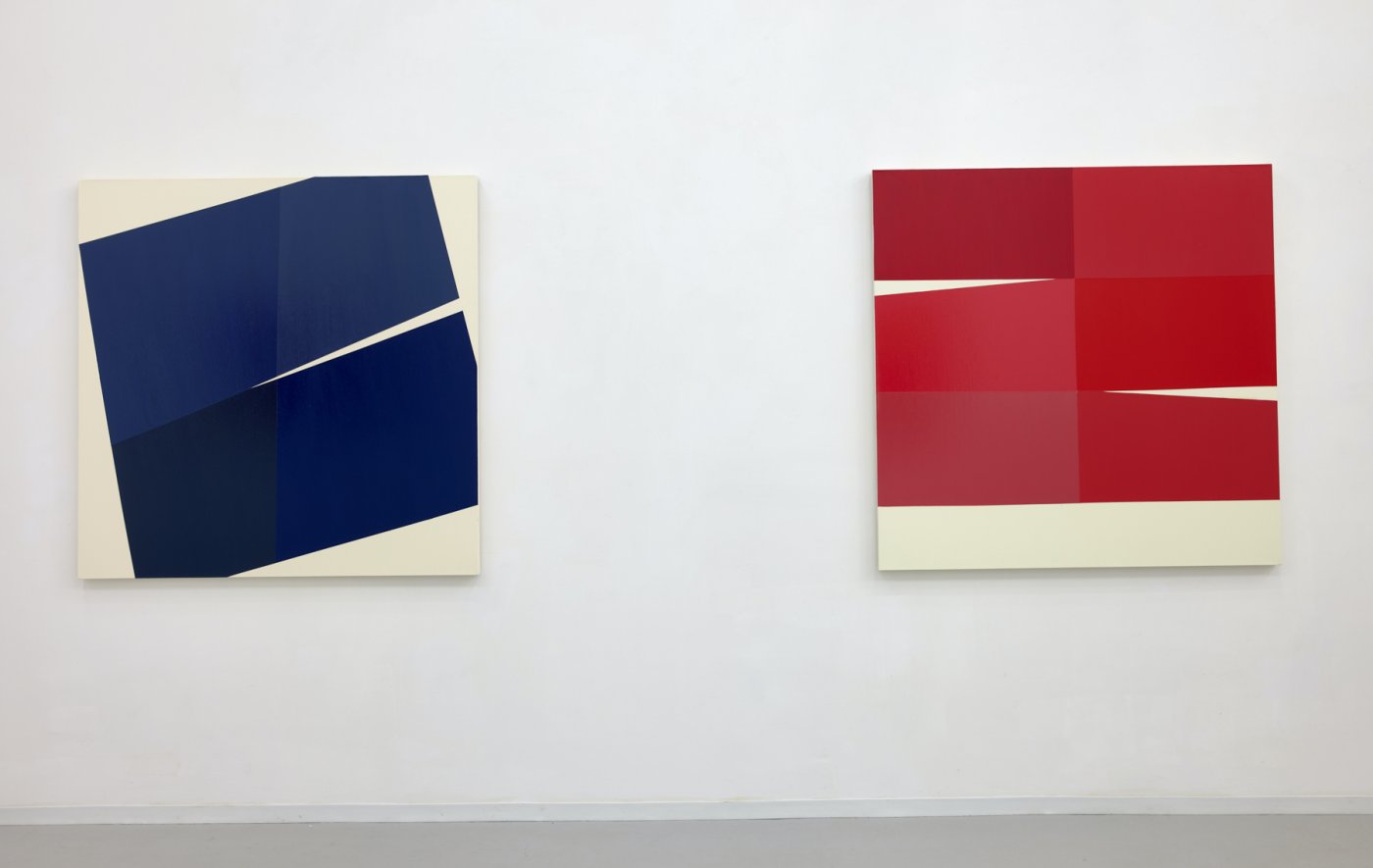 This presentation includes ten paintings, each acrylic on canvas in a square format and measuring 54 x 54 inches. This is a departure for Trincere whose paintings historically have been shaped canvases and rarely of uniform size. Her titles are usually descriptive, generally limited to the colors and shapes of the individual paintings. However, this new series differs in that the titles are not descriptive but convey an attitude, almost a return to an 80s punk sensibility that is edgy, gritty and a little tough and unapologetic. The titles include: Blood and Guts, War, Fuk, Thor, Holy Terror and You Woke Up The Beast—detect a theme here? Yet, they are not nostalgic nor representative of any particular style or artwork from the 1980s. These paintings are fresh, bold and have the same character and vibe as the artist’s most recent series, but in a square format.

There are two key aspects to this new body of work. First and formally, the new series of paintings is focused on the pictorial space and not the literal shaped space that the paintings or the interior elements occupy. In other words, thinking about the compositions as pictures confined to a set of defined parameters, in particular square canvases instead of shaped and less dimensionally confined canvas. Intellectually, this was most likely derived from the artist being confined to her studio and having to squeeze her life into a much smaller physical and limited intellectual space during the pandemic.

The second aspect and conceptually, this new series of paintings is derived in large part from Trincere being introspective during the pandemic given her limited interaction with other people. She contemplated how her (and other artist’s) perceptions about art and her work has changed over time and in reaction to changes in culture, living environment and society in general. For example: urban versus rural living; being in the intensity of Manhattan and the New York art scene for 35 years versus emerging artists who are just starting out; the influence of urban architecture and street maps reinforcing geometry and right angles; the progression of music from hard rock and punk through new age, electronic dance to rap and hip hop; the vast number of movements in art history from neo-geo, neo-expressionism and graffiti to immersive installations, identity politics, relational aesthetics and new media followed by a return to figurative and narrative painting, re-presenting and rediscovering women artists and artists of color to digital art and Instagram. It has been head-spinning.

The new paintings by Trincere are in some way hitting reset, a return to zero because everything starts at the beginning, at zero. She has returned to the basics of: a square canvas and focus on composition on a confined support; an entire series of paintings of uniform dimensions; and a series of new pictures, not just shapes. The artist did not see these parameters as constraints nor limitations, but rather as an intellectual and visual challenge to making ten spectacular bold paintings that are each unique but having a unifying harmony, soul and attitude that holds them together. Hence the title, Painting Zero.

Trincere thought about the Zero Group from Germany as she considered hard-edge painting over the Post War decades and internationally. The Zero Group was active from 1957 to 1966 and included the artists Heinz Mack, Otto Piene, Günther Uecker, Yves Klein, Piero Manzoni, Lucio Fontana, and Jean Tinguely among others, working primarily in Germany, the Netherlands, Belgium, Italy, France and Switzerland. Commenting on the group’s name, Piene once said: “From the beginning, we looked upon the term not as an expression of nihilism—or a Dada-like gag, but as a word indicating a zone of silence and of pure possibilities for a new beginning as at the count-down when rockets take off—zero is the incommensurable zone in which the old state turns into the new.” **

The primary goal of the Zero Group was to move away from subjective art and focus on the materials that are used to create the artwork and the space in which the artwork exists. Thus, deemphasizing the artist’s hand and instead focusing on the “light and space”. Trincere shares many of the same philosophies in her work, whether it be with square or shaped canvases. The most important aspects of her art is color, surface and light as well as the surrounding space in which the artwork is hung and interacts as all of it is necessary to complete the composition, engage the viewer and create the experience.

Trincere is all about non-objective, hard-edge painting with limited palettes and an emphasis on the surfaces and their interplay with color and light. The surfaces are produced from many layers of paint, slowly built up to create viewing experiences that range from tremendous depths of color that approach voids and nothingness to luminous and translucent hues that pop off the surface of the canvas and in your face, and generally, all in the same composition and geometric structure.

The artist’s approach is clean with crisp lines and reductive and mostly using (or leveraging) shaped perimeters. The net effect is the colors and range of values do the heavy lifting in terms of hinting that the surfaces of geometric forms are receding back or pulling forward out of the two-dimensional picture plane. However, her use of extreme vector geometry and shaped perimeters to house the non-referential shapes further the suggestion or evoke a possible dimensionality to the compositions. The term leveraging is used parenthetically above because it is not clear that any illusion of three-dimensional shapes or dimensional space is intentional, but rather the consequential product of her methodical, process-driven approach to painting whereby her goal is a balanced non-objective composition that adheres to her principles and instincts as to the right mix of color, line and form coming together while being mindful of the surface and the interaction with light and the surrounding space.

Li Trincere lives and works in New York City. She has shown in the United States and abroad since 1982. Moving to New York in the early 1980s, she settled in East Village and was part of that important development of abstract art in Lower Manhattan. Trincere exhibited along with her colleagues Olivier Mosset and Alan Uglow at the Mission Gallery run by D.D. Chapin in 1984 and 85, then with the influential and important Julian Pretto Gallery. In 1989 and 1990 her work was presented in solo exhibitions at Galerie Rolf Ricke in Köln. More recently, Trincere exhibited at Minus Space in Brooklyn. David Richard Gallery is pleased to represent Li Trincere.