I was asking for something specific and perfect for my city,
Whereupon lo! upsprang the aboriginal name
[1]

Now I see what there is in a name, a word, liquid, sane, unruly,
musical, self-sufficient…
—Walt Whitman, from “Mannahatta”[2] 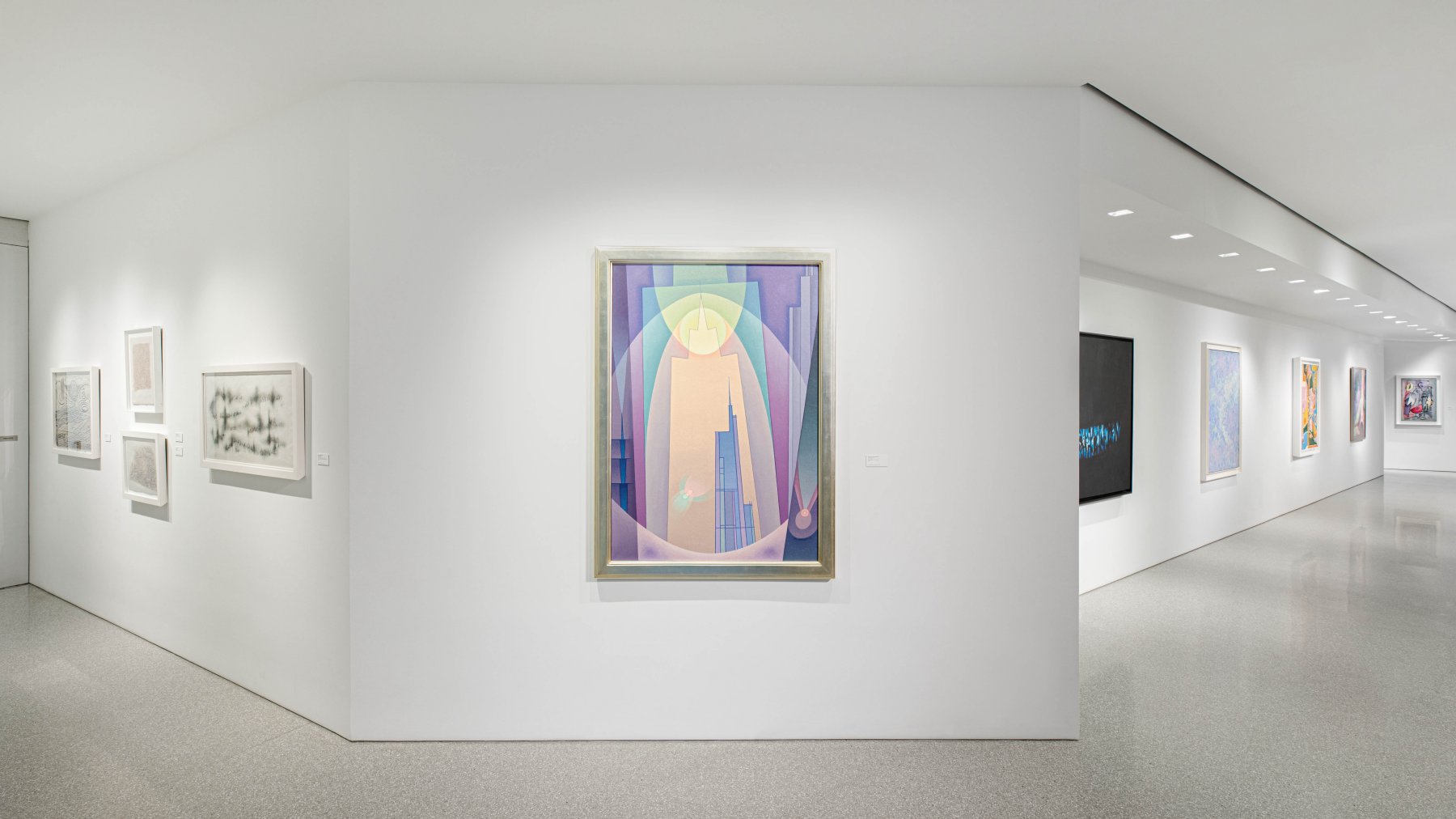 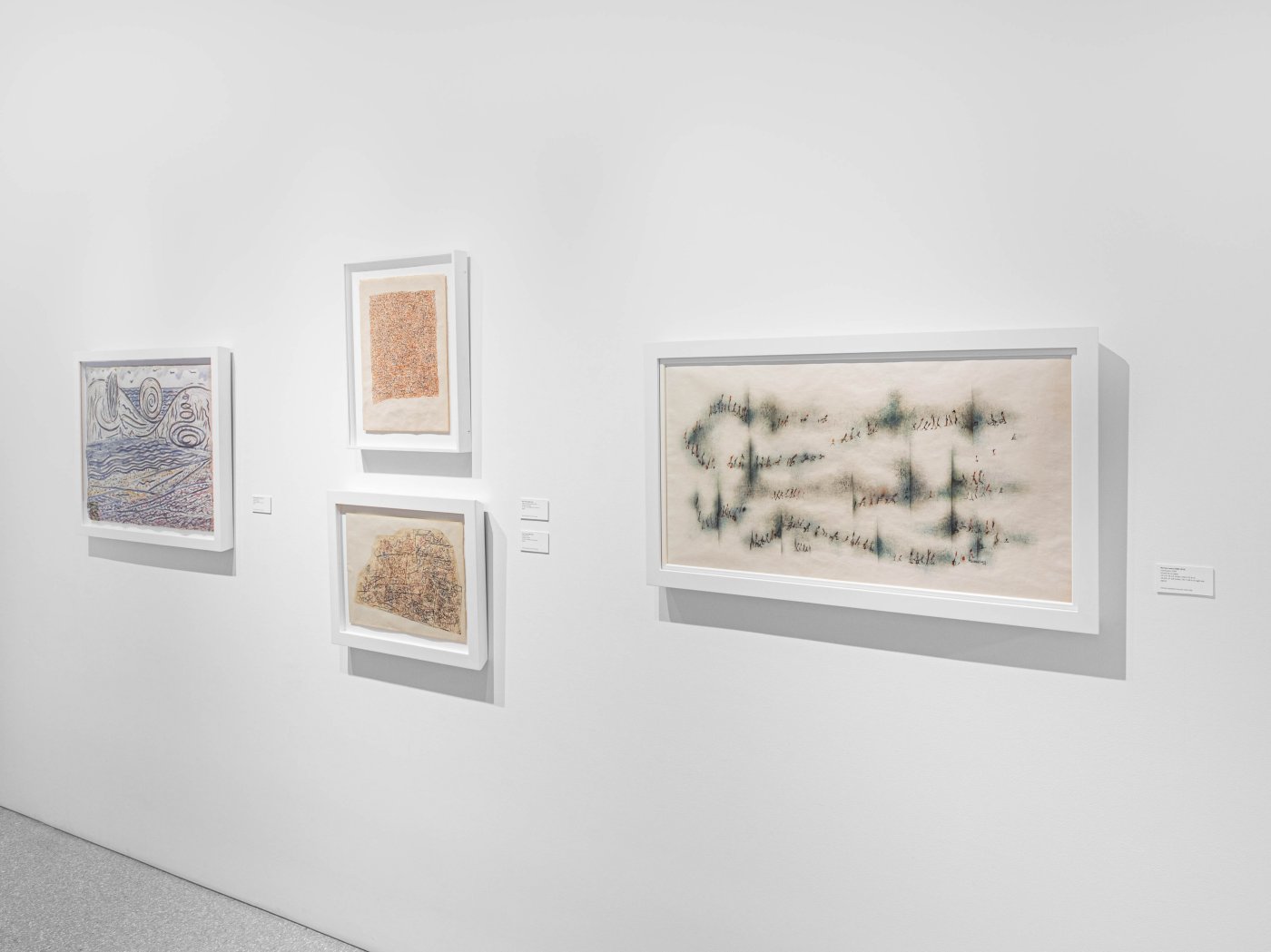 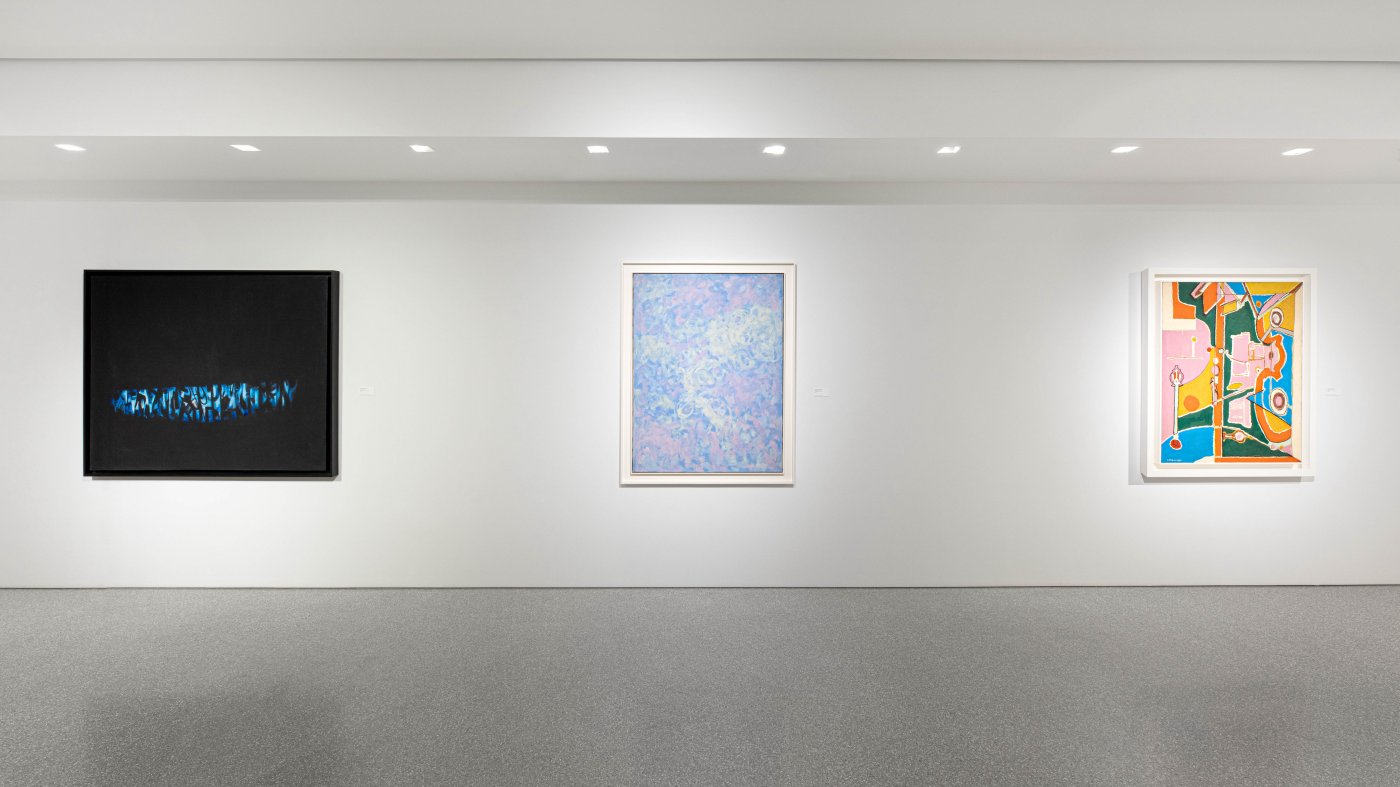 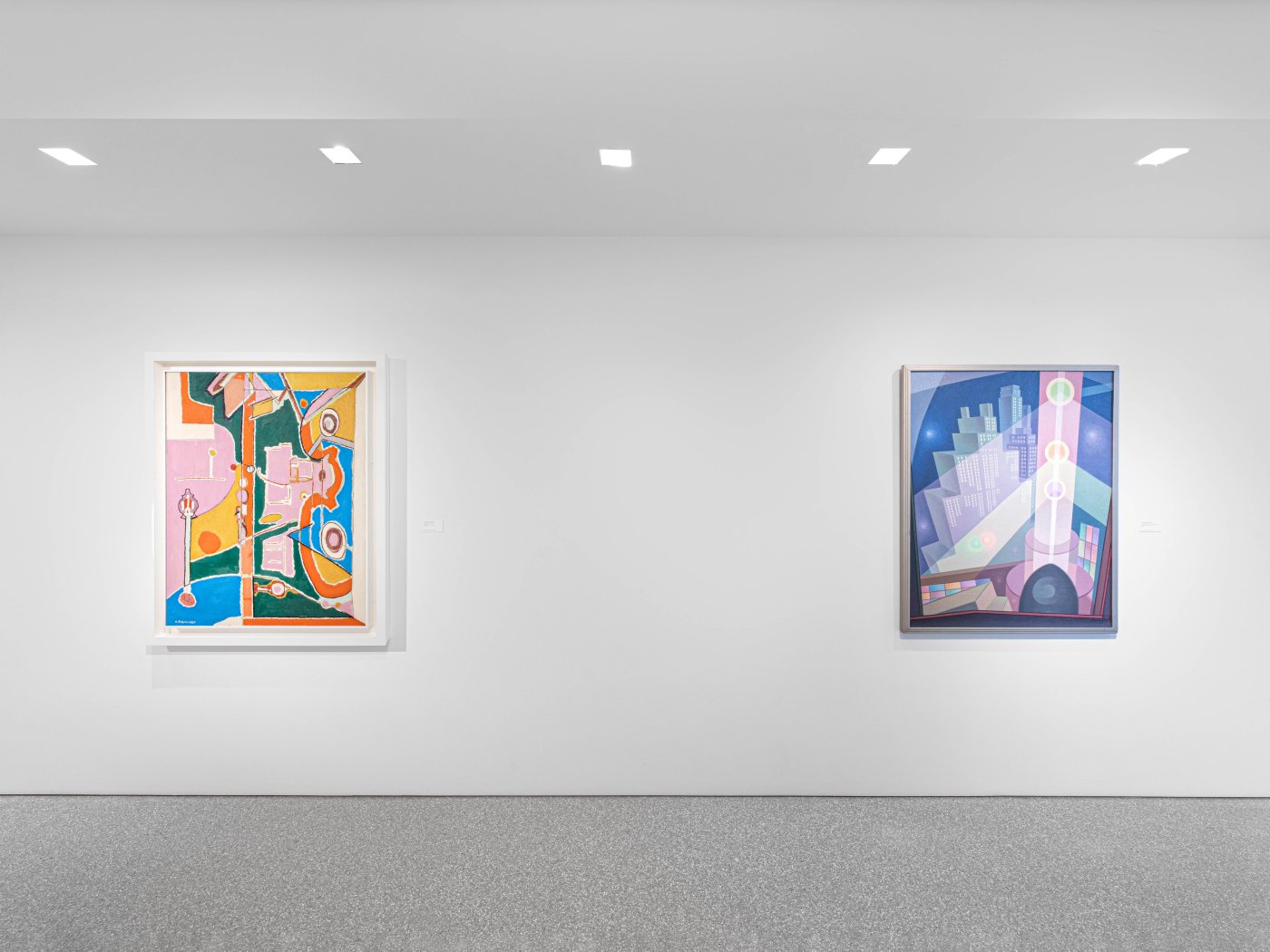 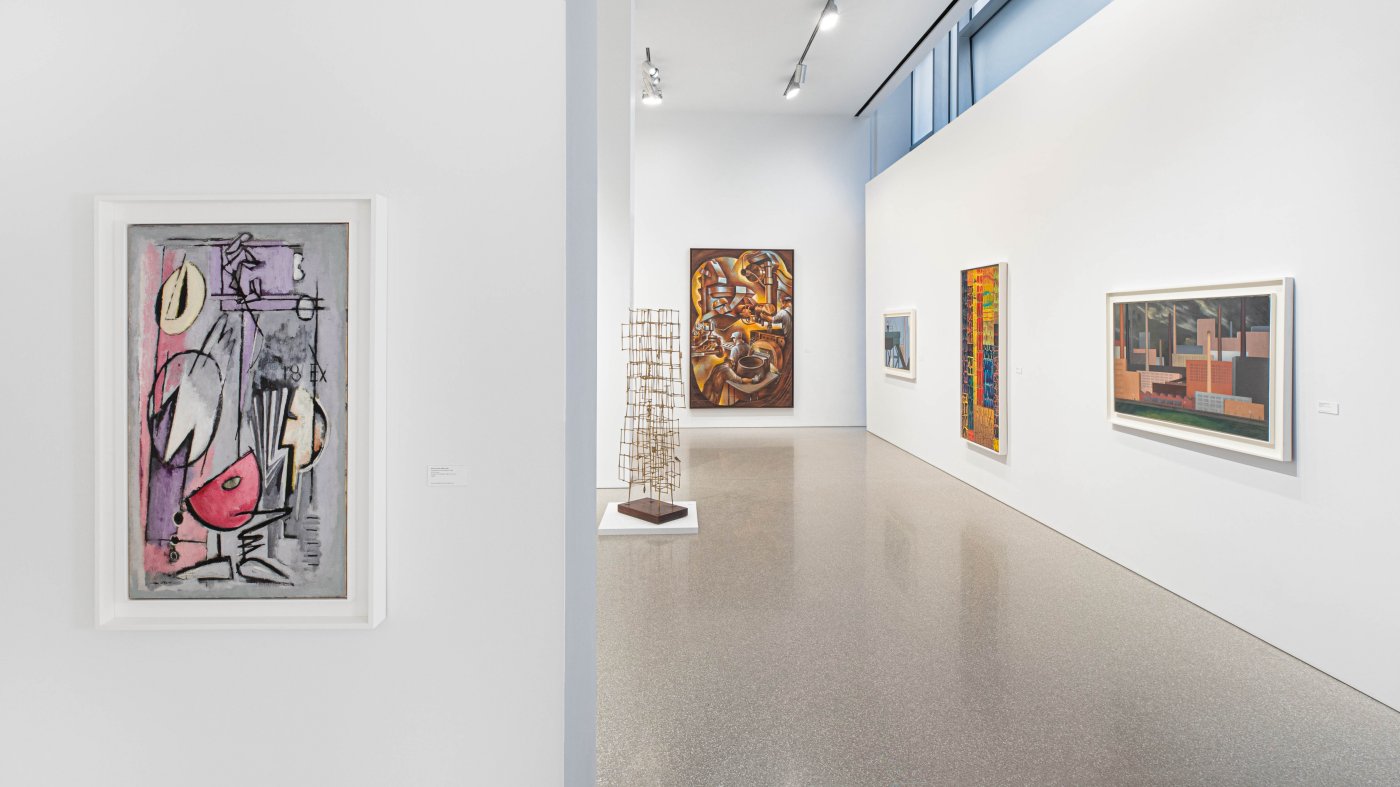 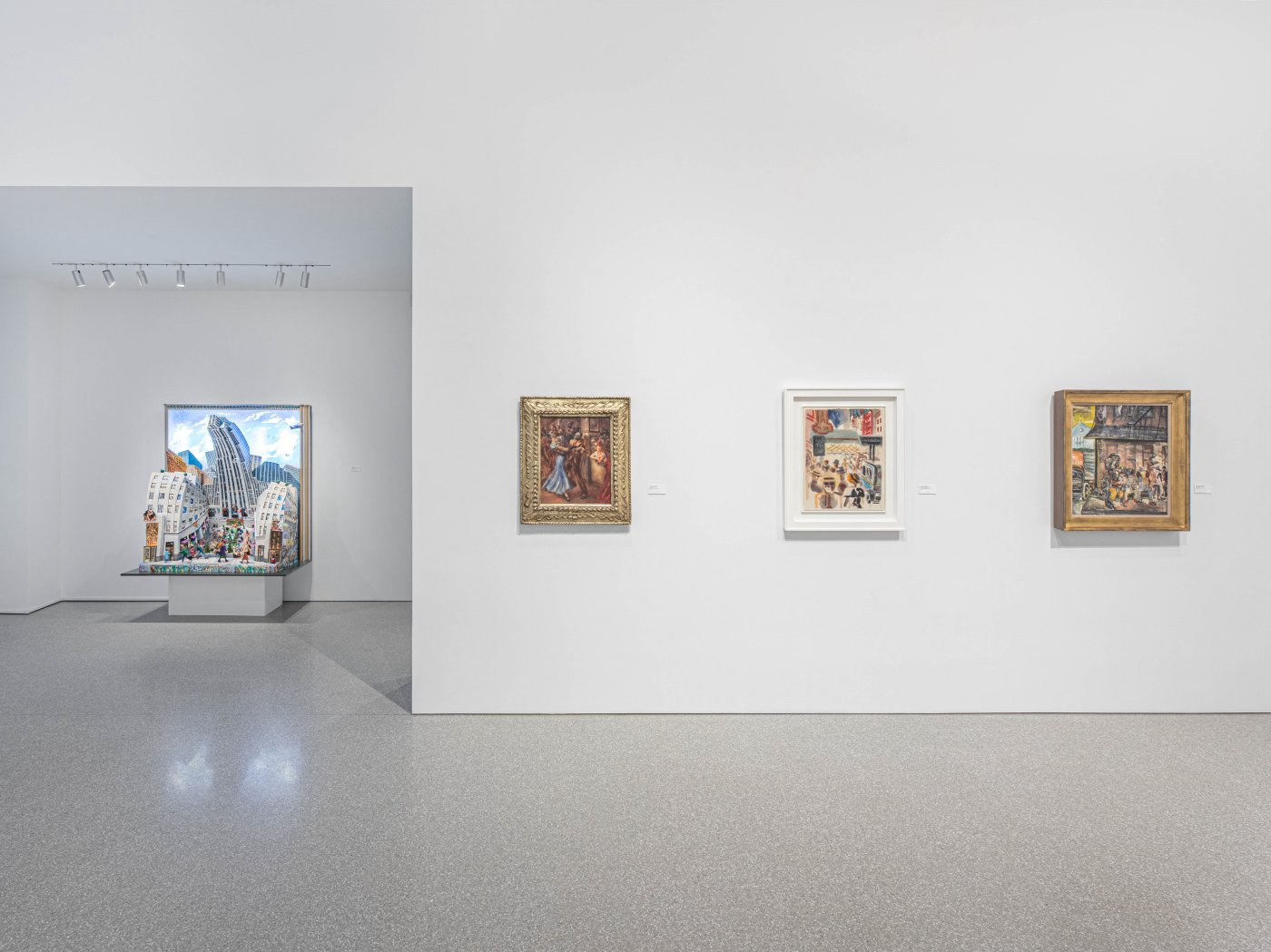 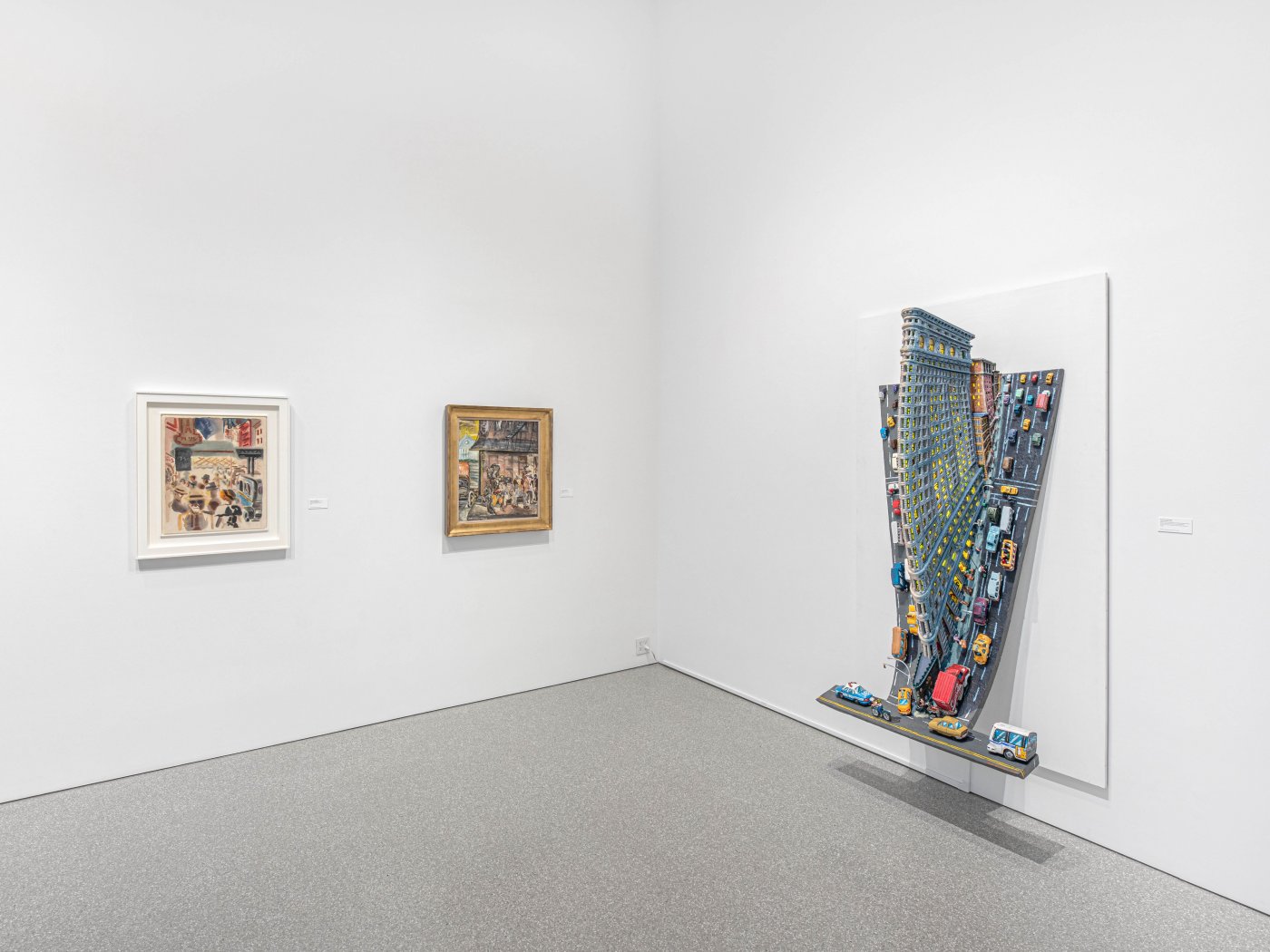 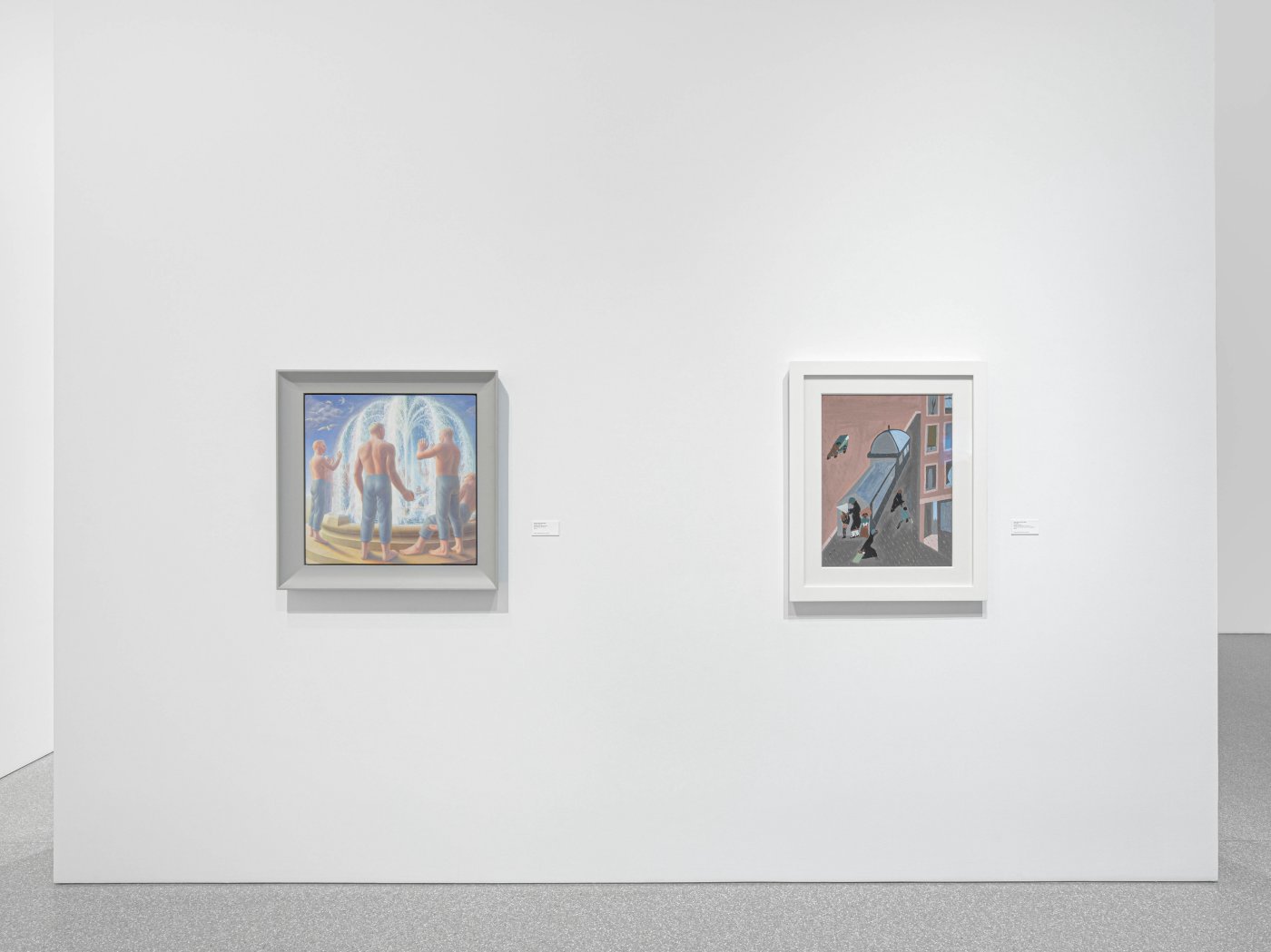 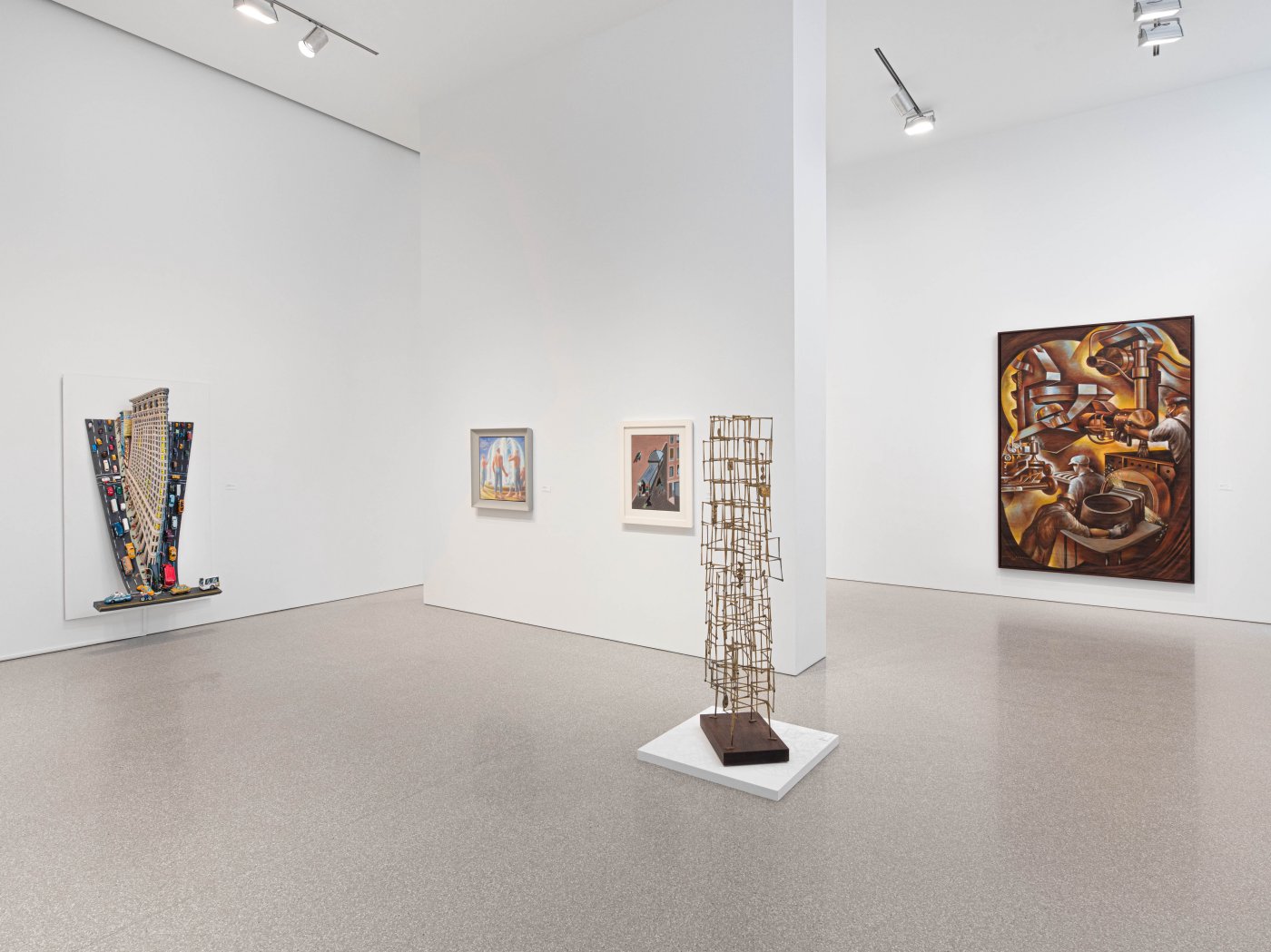 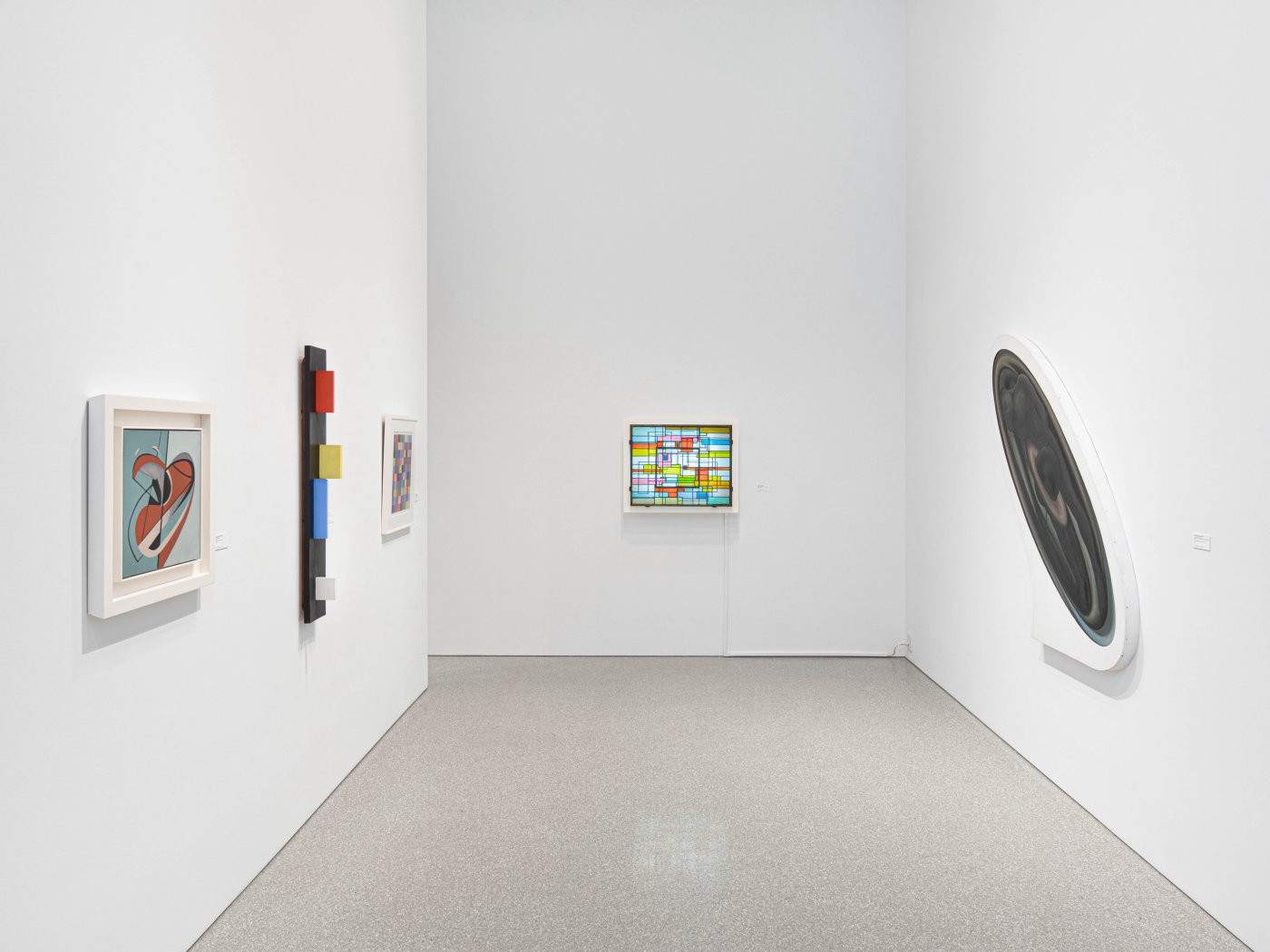 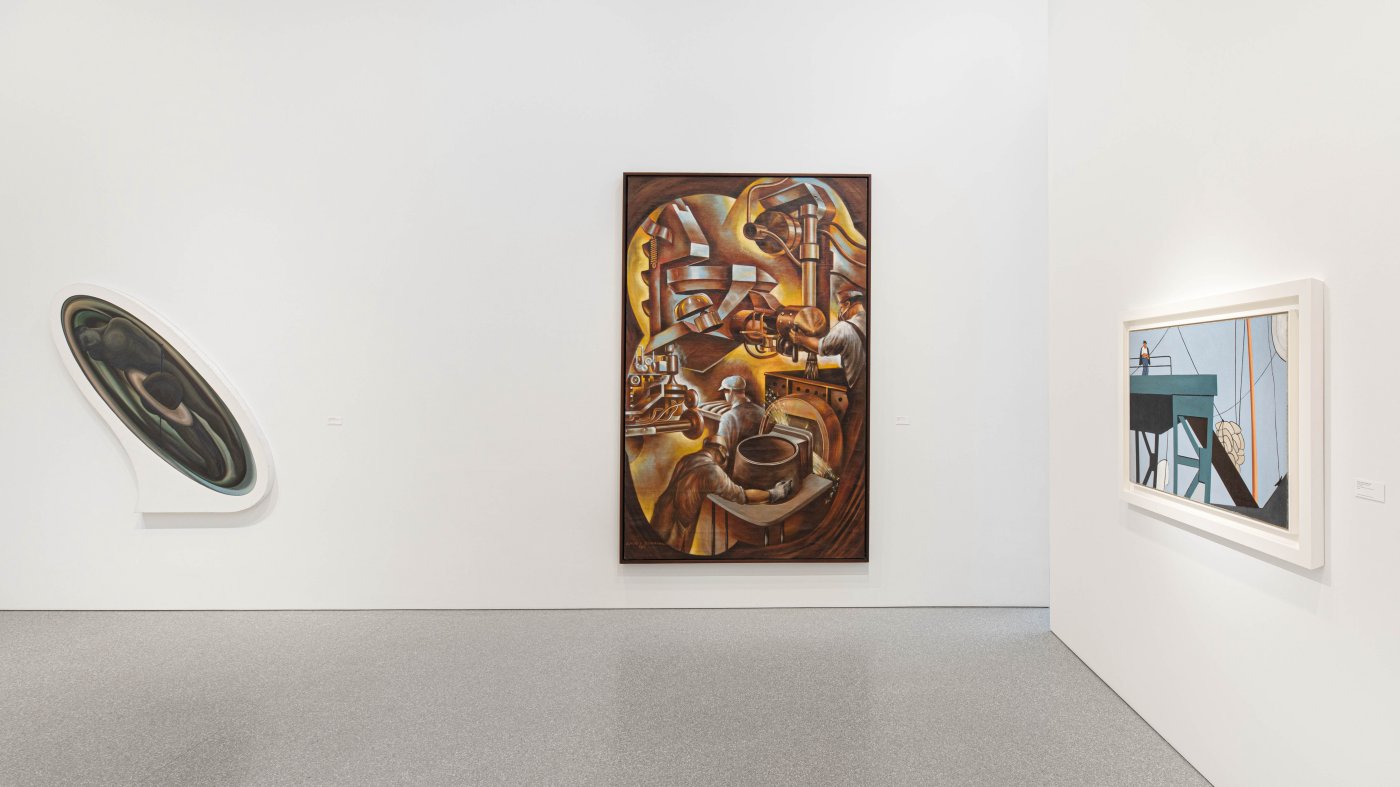 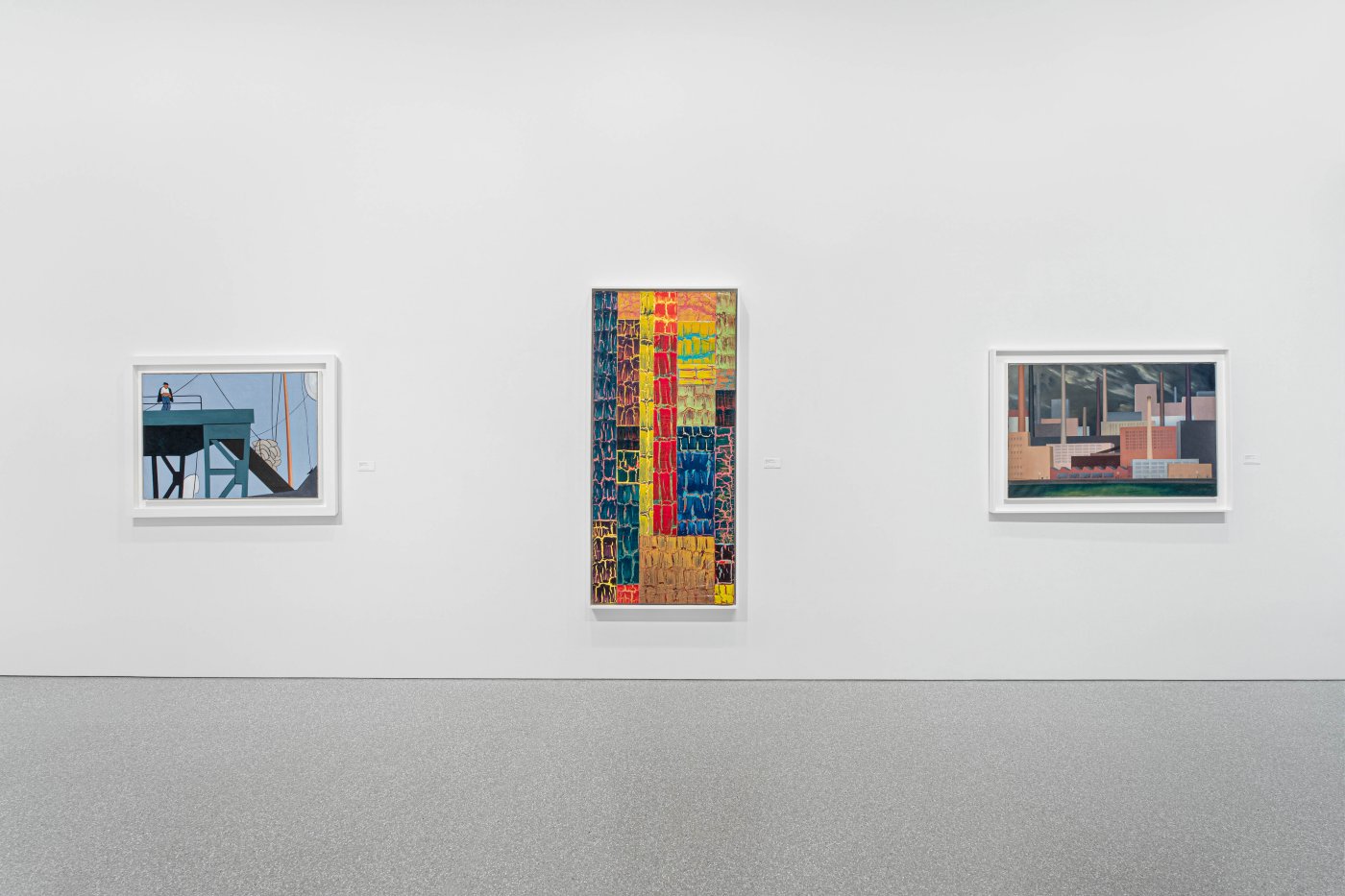 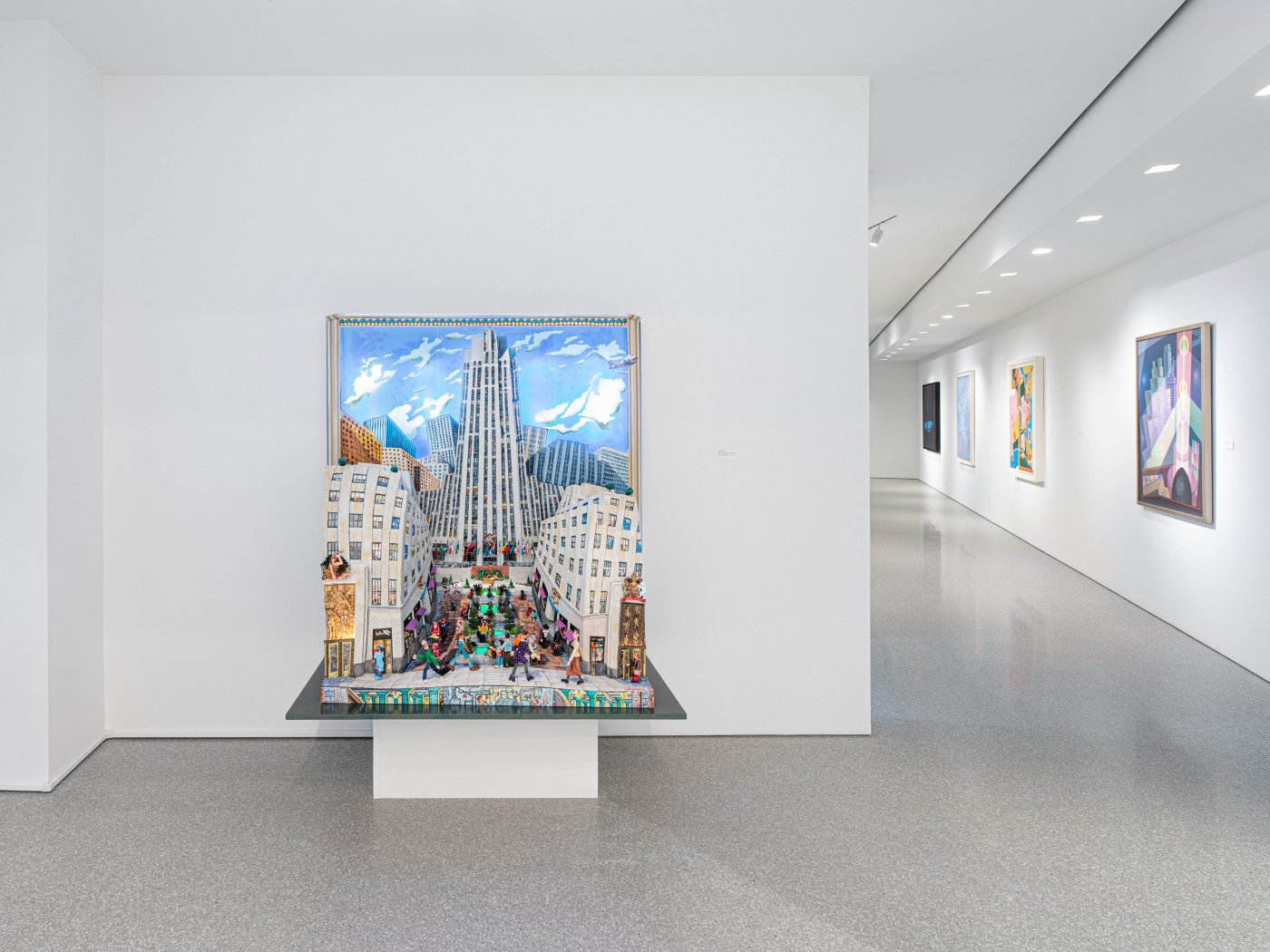 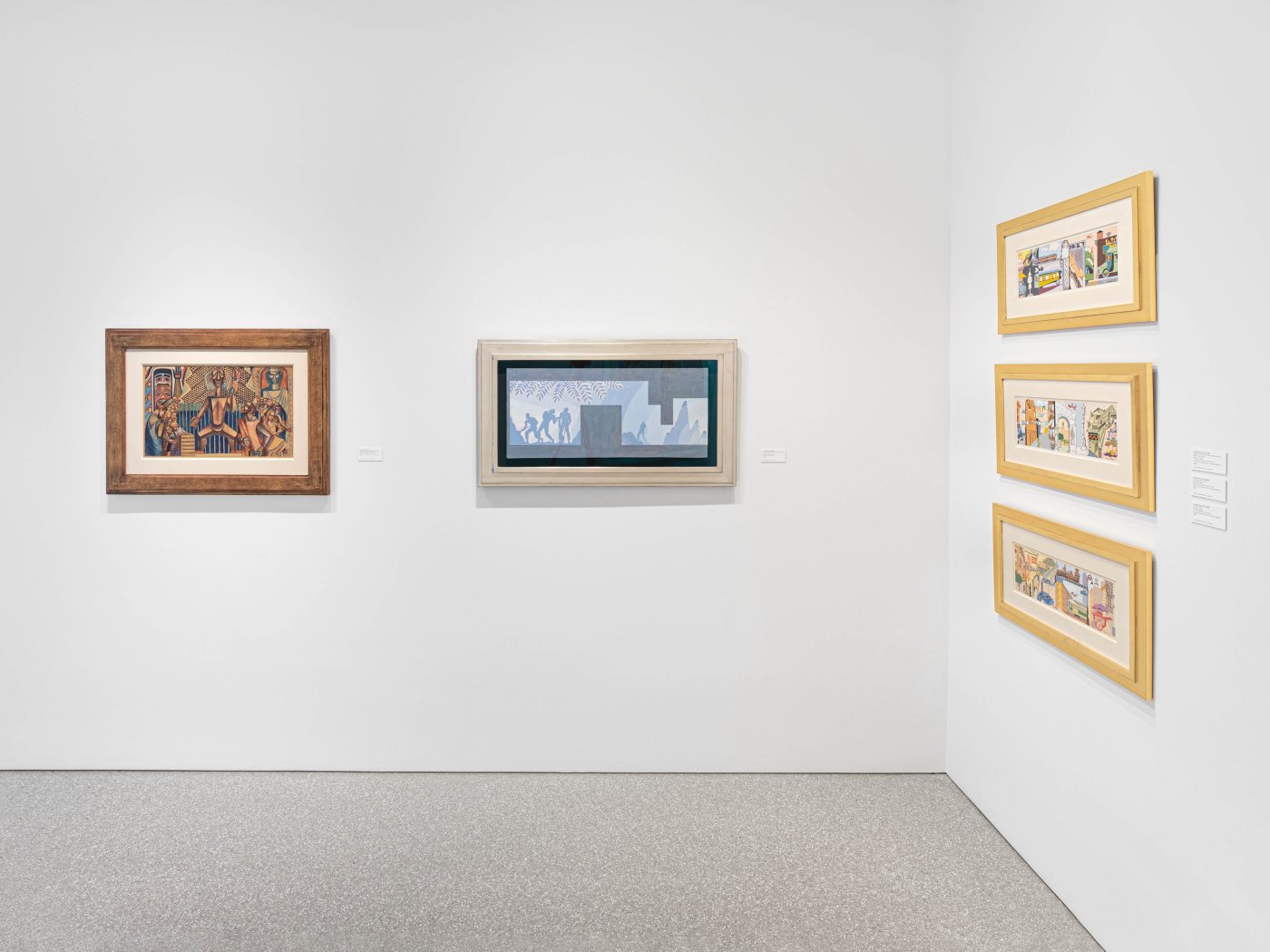 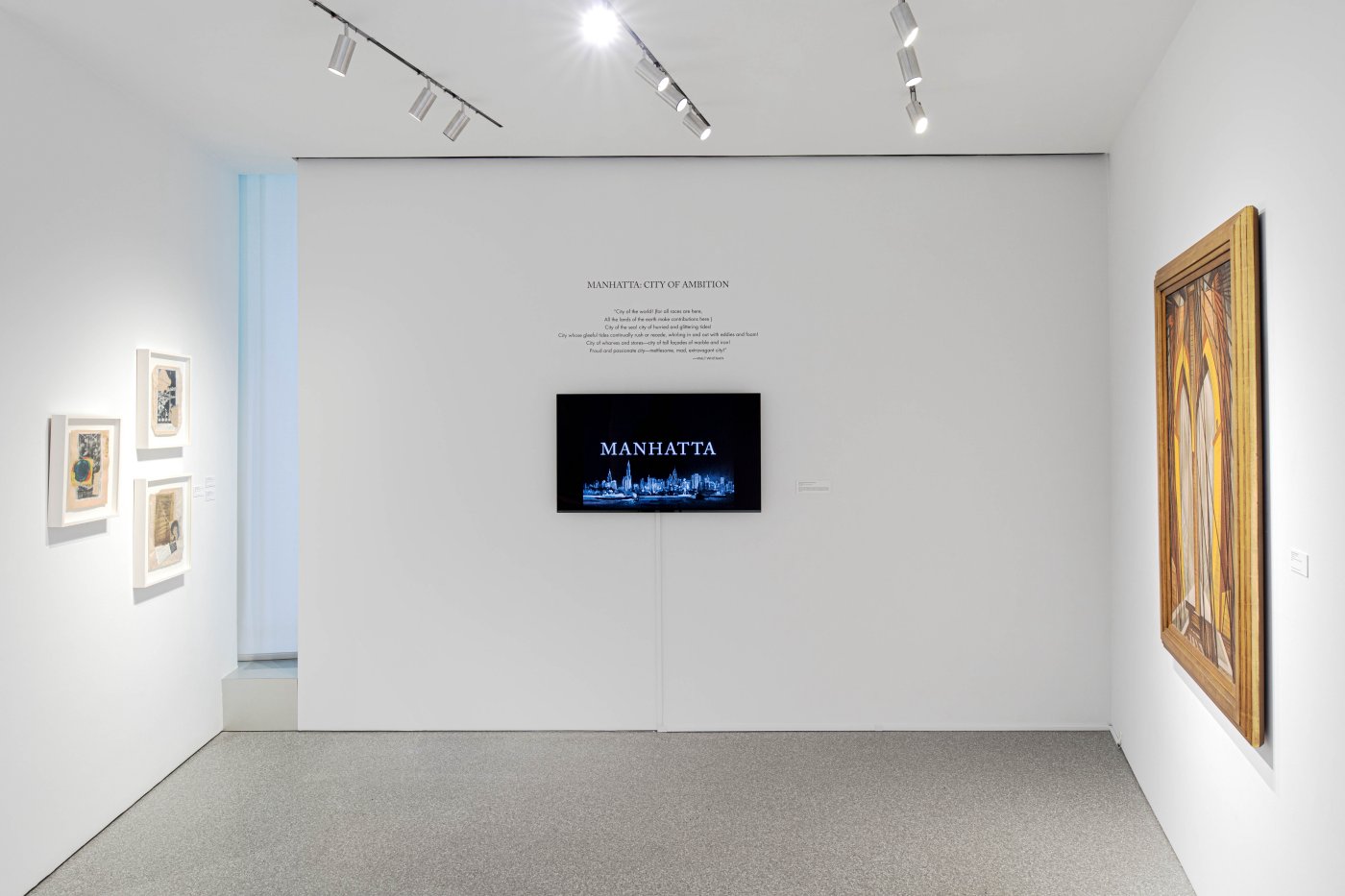 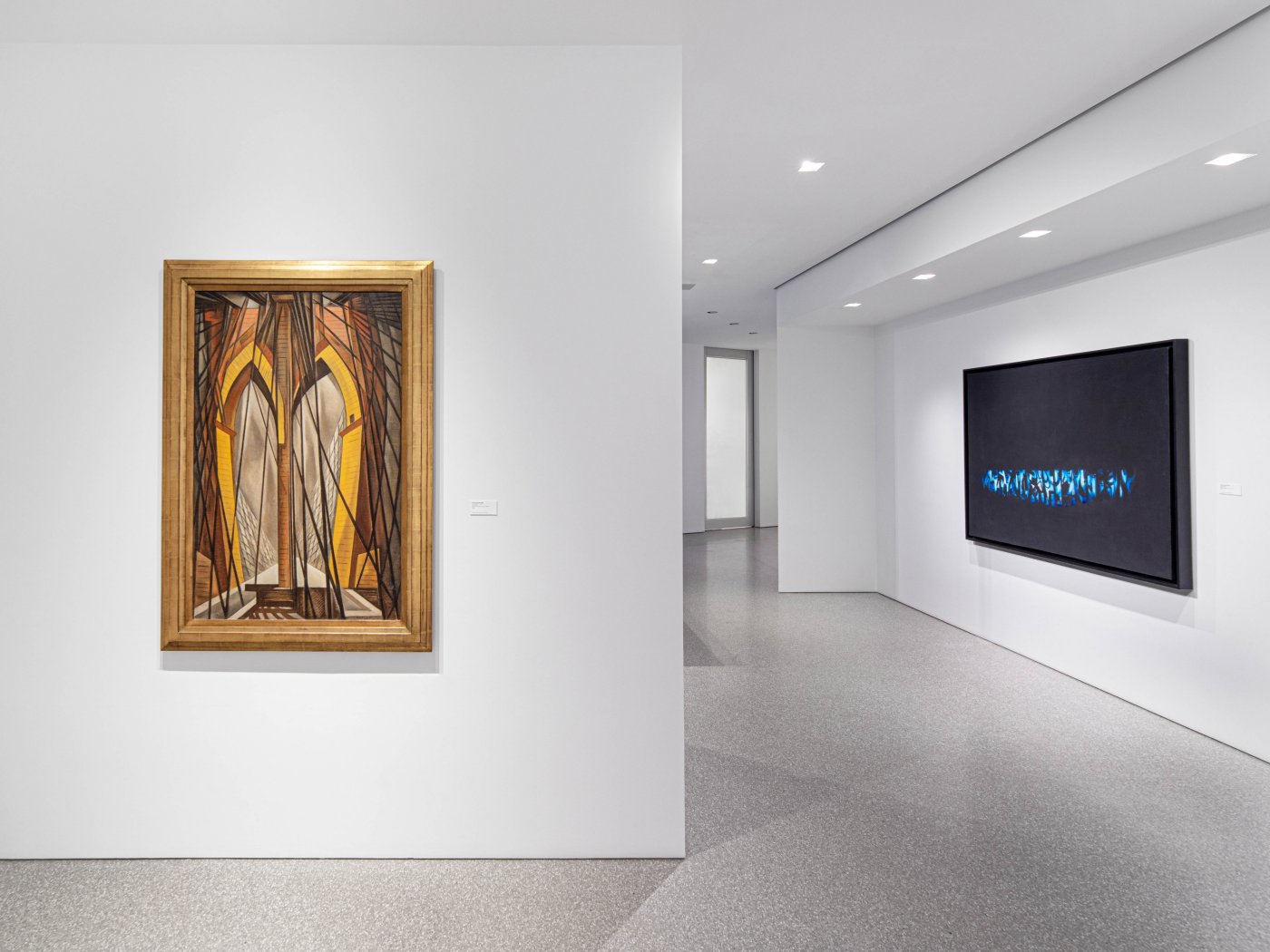 Inspired by Paul Strand and Charles Sheeler’s avant-garde film Manhatta (1920–21) the artists featured here offer scintillating visions of urban life, exalting the struggles and triumphs of a densely-populated metropolis rebuilding itself in the wake of global catastrophe. In addition to the diverse selection of paintings, works on paper, and sculptures in the exhibition, the gallery is screening Manhatta on a continuous loop in a dedicated alcove of the gallery.

Brought together in commemoration of the film’s centennial, the works on view in Manhatta: City of Ambition celebrate urban centers as loci of inspiration. A freestanding metalwork sculpture by Harry Bertoia (1915–1978) dating to 1956 evokes the modernist architectures of skyscrapers while demonstrating the formal possibilities of sheet metal—a material favored by many sculptures in the postwar decades for its abundance and versatility. Transcendentalist Painting Group leader Raymond Jonson’s (1891–1992) tributes to the grand architectural achievements of early 20th century Chicago, City Lights (1933) and City Ultimate (1936), are on view alongside Howard Cook’s (1901–1980) iconic rendition of the Brooklyn Bridge, The Bridge No. 1 (c.1951), an ode to the feat of modern engineering that connects the New York’s two most densely populated boroughs. Three works by Norman Lewis (1909–1979) dating to each decade of his mature career provide succinct insight into the evolution of the artist’s style; a lifelong resident of Harlem, Lewis variously portrays the frenetic bustle and tranquil glow of midcentury New York through his signature calligraphic line and sublimely atmospheric abstraction. William T. Williams (b.1942) likewise pays homage to the historic neighborhood in his process-based abstract painting Time of Song (1993), an exemplary work from his 111 ½ Series, named for the Harlem address where his family regularly gathered for many years. Charles Alston’s (1907–1977) landmark 1948 painting Harlem at Night combines the multi-perspectival structures of Cubist abstraction with the improvisational rhythms of jazz, resulting in a vibrant, serene nocturne punctuated by a constellation of glowing windows and streetlamps.

The modernist marvel of the electrified cityscape was an enduring theme throughout the art of the 20th century, and this trope is represented by three works with live electrical components: Red Grooms’ (b. 1937) monumental, elaborately painted sculptures Flatiron Building and Rockefeller Center, both dating to 1995, as well as Irene Rice Pereira’s (1907–1971) Glass Construction (c.1942), an amalgam of colored glass panes illuminated by a lightbox. In Savoy Dancers (1931), Reginald Marsh’s (1898–1954) sinewy figures animatedly dance in Harlem’s famous dance hall—one of the few racially integrated social clubs in the city at the time—as the crowded scene around them recalls the drama and bacchanalia of the Baroque frescoes the artist cited as primary sources of inspiration. George Tooker’s (1920–2011) ecstatic vision of urban fantasy set in Washington Square Park, Fountain (1949–50), is a masterful multi-figure composition from the artist’s early career, including an intensely psychological set of symbols and a radiant palette executed in his signature egg tempera medium. Beauford Delaney (1901–1979) likewise portrays an idyllic scene of Lower Manhattan in an exemplary work from his Greene Street period in Untitled (Greene Street), 1950, where the block on which he lived and worked for 24 years is expressionistically rendered in the artist’s signature, fauvist-inflected palette.

In Edmund Lewandowski’s (1914–1998) Industry (1942), workers toil in a factory scene set in the artist’s native city of Milwaukee; Lewandowski sought to elevate the sleek, complex forms of modern industrial machinery as well as the workers who operated them, who he considered to be exemplars of American progress. Ralston Crawford (1906–1978) addresses similar themes related to economy and labor in his clean-lined composition Unloading the Cargo; dating to the same year as Industry, Crawford’s painting emphasizes simplified geometric forms to the point of near-abstraction, successfully describing a scene of dockside industry in midcentury New Orleans. A group of intimately-scaled collages by Joseph Stella (1877–1946) dating to the interwar years take up similar themes of human-machine labor and its humanistic implications; referred to as his “Macchina naturale” works, the collages comprise found scraps of printed matter arranged to evoke the modernist dichotomy between man and machine, industry and nature. While Stella’s Macchina naturale works are connected to his activities in New York’s Dadaist circles, the artist also belonged to a movement known as the Precisionist School of painters, whose members favored highly controlled, sleekly finished compositions depicting regional American subjects; other artists who were active in the Precisionist scene included Crawford, Lewandowski, and, most prominently, Manhatta co-auteur Charles Sheeler.

Strand and Sheeler’s Manhatta is considered by most film historians to be the first avant-garde film produced in America. Unlike its Dadaist counterparts in Europe, which are steeped in the political despair of the continent’s interwar years, Manhatta constitutes a “Whitmanian [celebration] of the common,” writes experimental film historian Juan A. Suárez, which “conceived the modern material world as a hieroglyph of spiritual principles—‘art,’ democracy, ‘Americanness.’”[3] Guided by intertitles bearing excerpts of Walt Whitman poems, the 11-minute film comprises a series of non-narrative, documentary vignettes structured to suggest the progression of a single day, opening and closing with shots of New York Harbor at dawn and sunset, respectively. Strand and Sheeler shot the film at various locations across five square blocks of Lower Manhattan, capturing the spectacle of the island’s waterways, architectures, and inhabitants over several months of 1920–21. Using rhythmic montage and extreme camera angles to convey the surging pulse of the city’s throng and the vertiginous perspectives of its skyscrapers, the filmmakers effectively convey the themes of Whitman’s verse while incorporating influences from contemporaneous avant-garde painting movements, including Cubism and the Ashcan School. Both Strand and Sheeler were protégés of Alfred Stieglitz, and many of Manhatta’s sixty-five static shots resemble the sharp focus and richly varied tonal scale of a platinum print. Created in an era when the movie camera was still an expensive novelty—the 35mm French Debrie on which it was shot cost Strand $1600—Manhatta ultimately constitutes a moving portrait of the island.

Premiering at the Rialto Theater off Times Square on July 24, 1921, Manhatta was highly influential to an entire generation of filmmakers in the United States and Europe, spawning a new genre of experimental film known as the “City Symphony.” This category now includes some most important works of interwar cinema, such as Walter Ruttmann’s Berlin: Symphony of a Great City (1927), Alberto Cavalcanti’s Nothing But Time (1929), Dziga Vertov’s Man with a Movie Camera (1929), and Jean Vigo’s On the Topic of Nice (1930). Manhatta was digitally restored in 2008, as most extant copies were jittery, scratched celluloid prints that had been overexposed due to years of screenings and poor storage practices. Thanks to the efforts of multiple institutions specializing in film preservation, all 11,223 frames of the digital copy on view at the gallery have been corrected to replicate the crystal-clear, steadily shot film audiences saw in the 1920s. Enhanced by Whitman’s rhapsodic words, Manhatta’s silvery impressions of the city’s achievements in architectural innovation, industrial expansion, and urban community perfectly reflect the thematic concerns of the other artworks on view.

[1] Prior to colonization, a loose association of Munsee-speaking peoples known as the Lenape populated much of the northeast coast of the present-day United States, including lower New York state. The Munsee name for the 16-mile-long island formerly home to an essential grove of hickory trees is “manaháhtaan.” Though it was renamed twice in the 17th century, first by the Dutch and then the English, the Lenape’s name for the island, slightly modified to “Manhattan,” endured the colonialist razing, even after the people to whom it belongs were driven from it.
[2] Walt Whitman, “Mannahatta,” in Leaves of Grass (Boston: James R. Osgood and Company, 1881–1882) p. 360.
[3] Juan Antonio Suárez, “City Space, Technology, Popular Culture: The Modernism of Paul Strand and Charles Sheeler’s Manhatta,” Journal of American Studies, Vol. 36, Iss. 01 (April 2002) 96.