A unique artist who worked across a variety of media, Mari Katayama presents the exhibition Home Again, which brings together works made since 2009 along with her recent photographic series “In the Water”, shown in Europe for the first time. 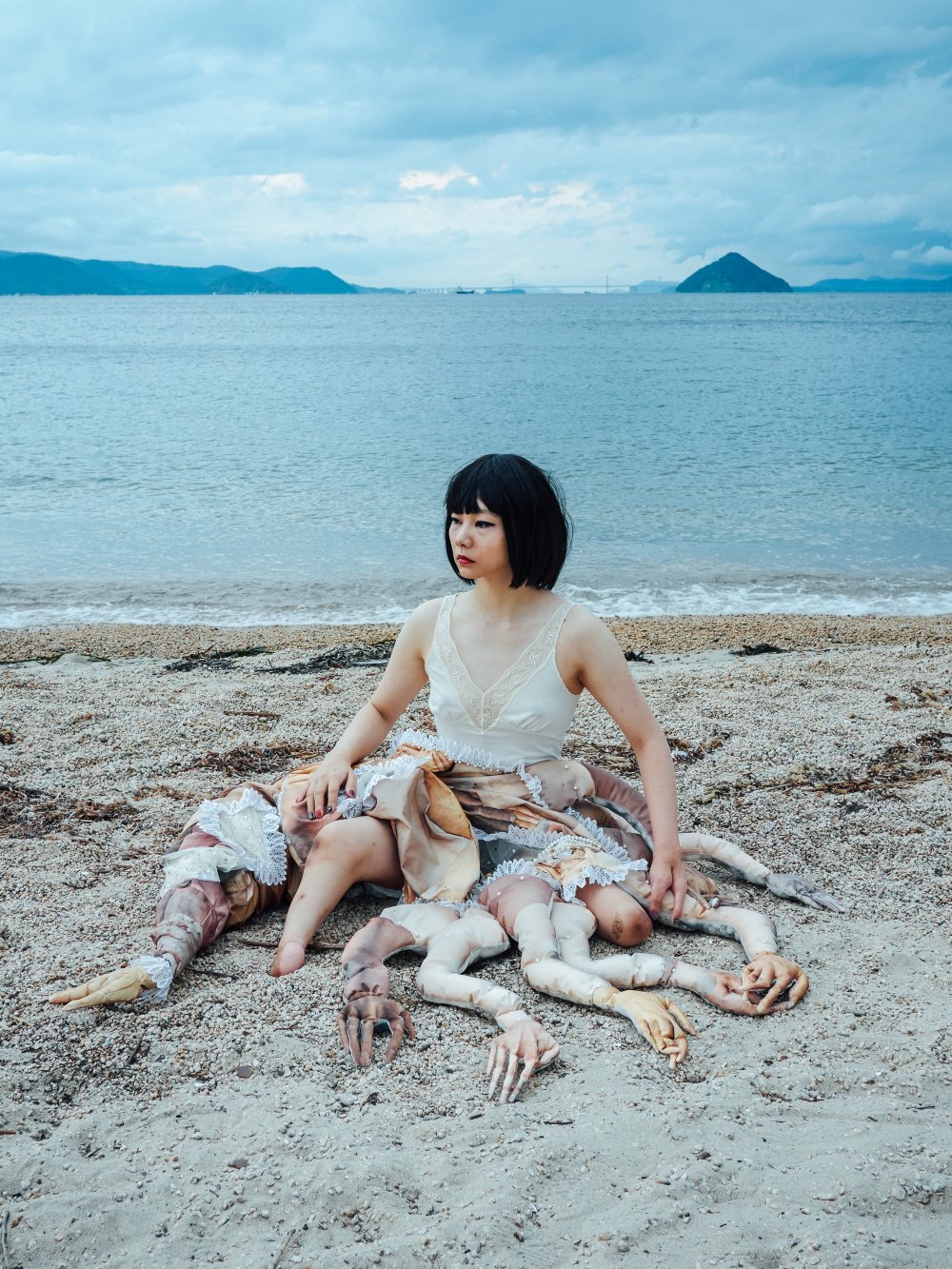 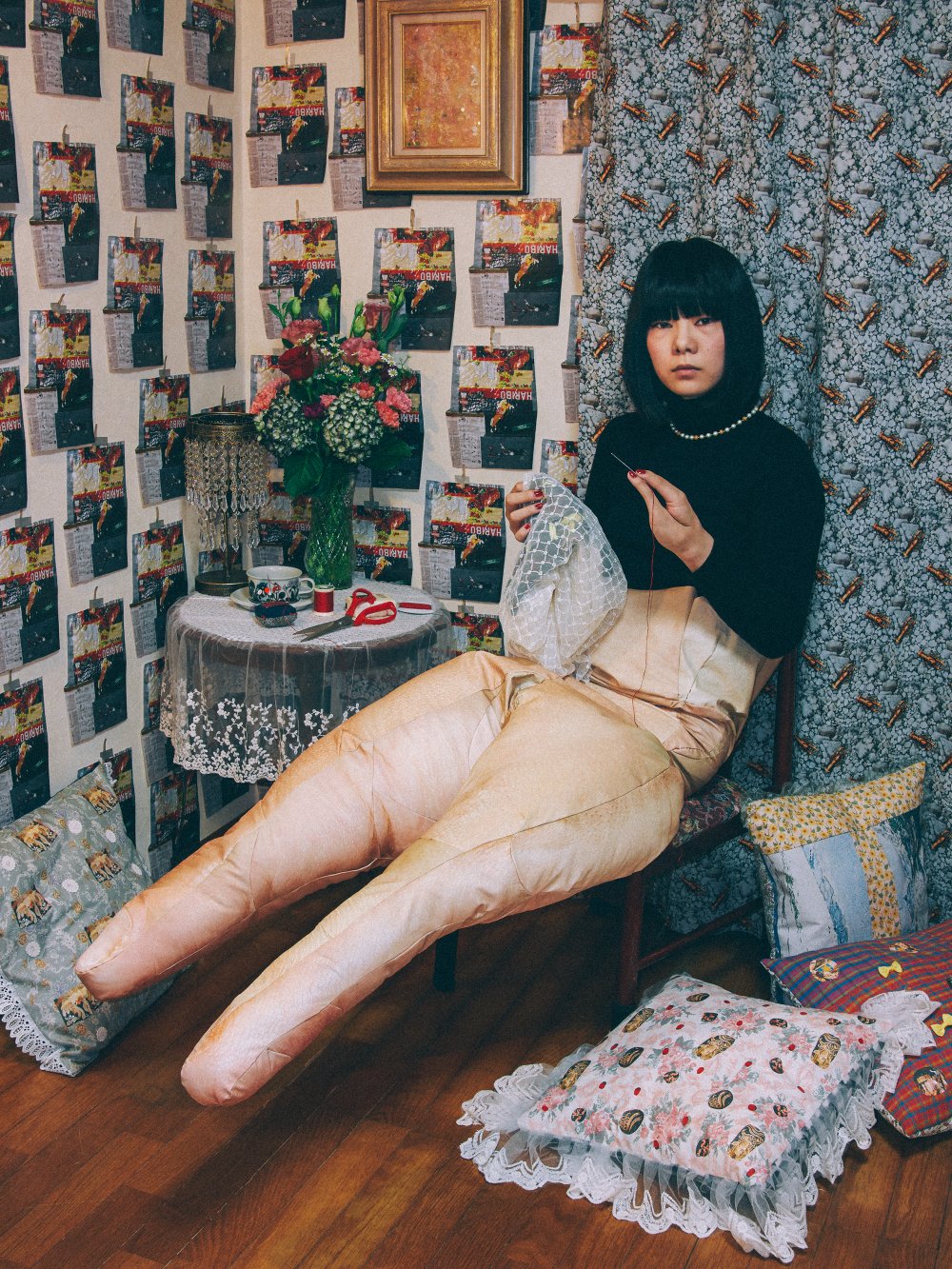 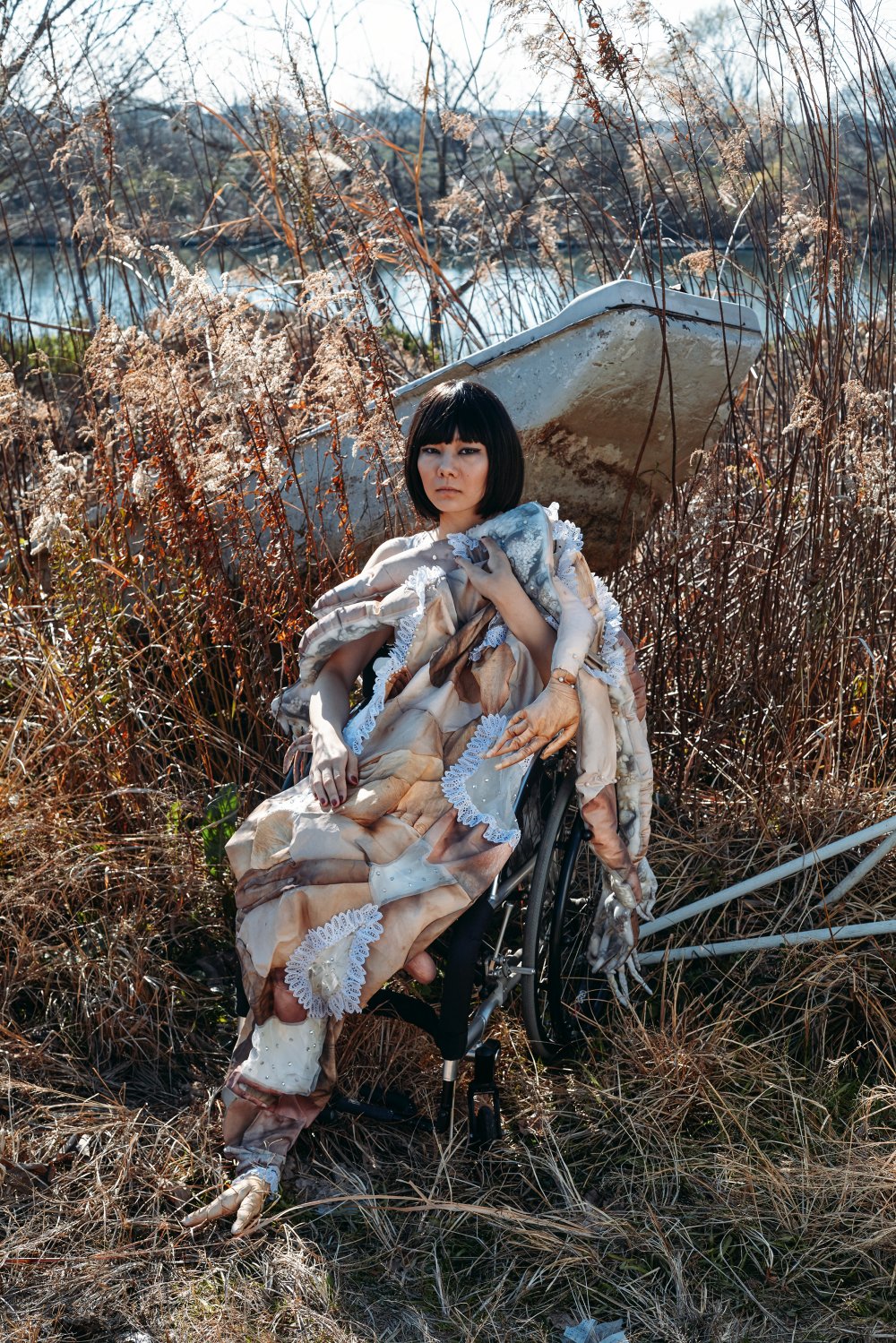 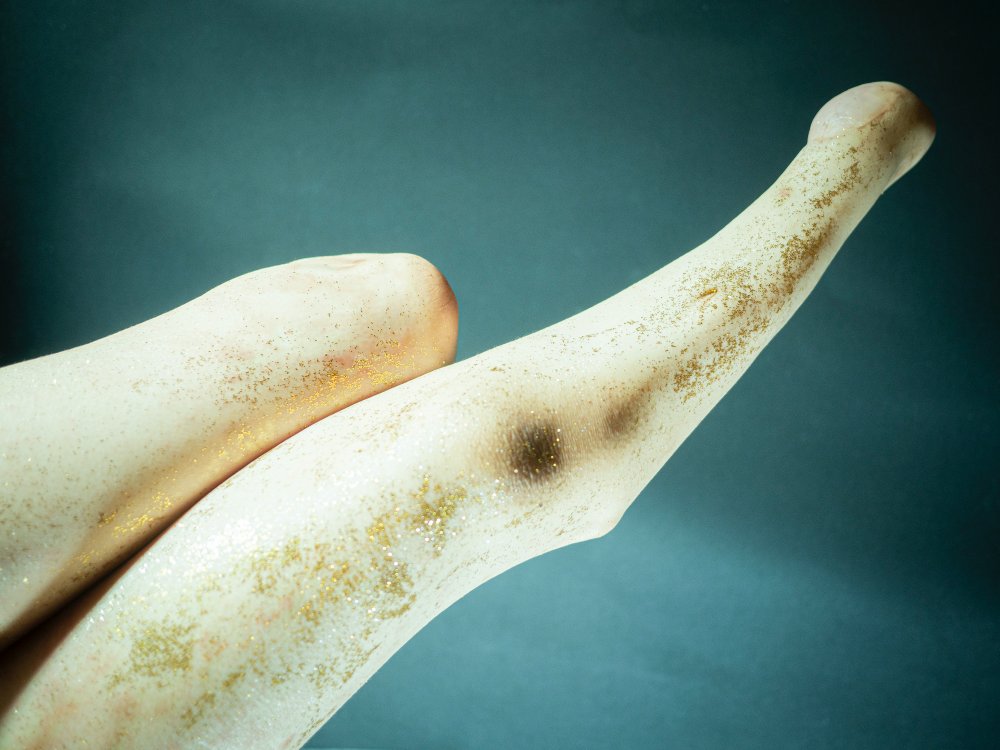 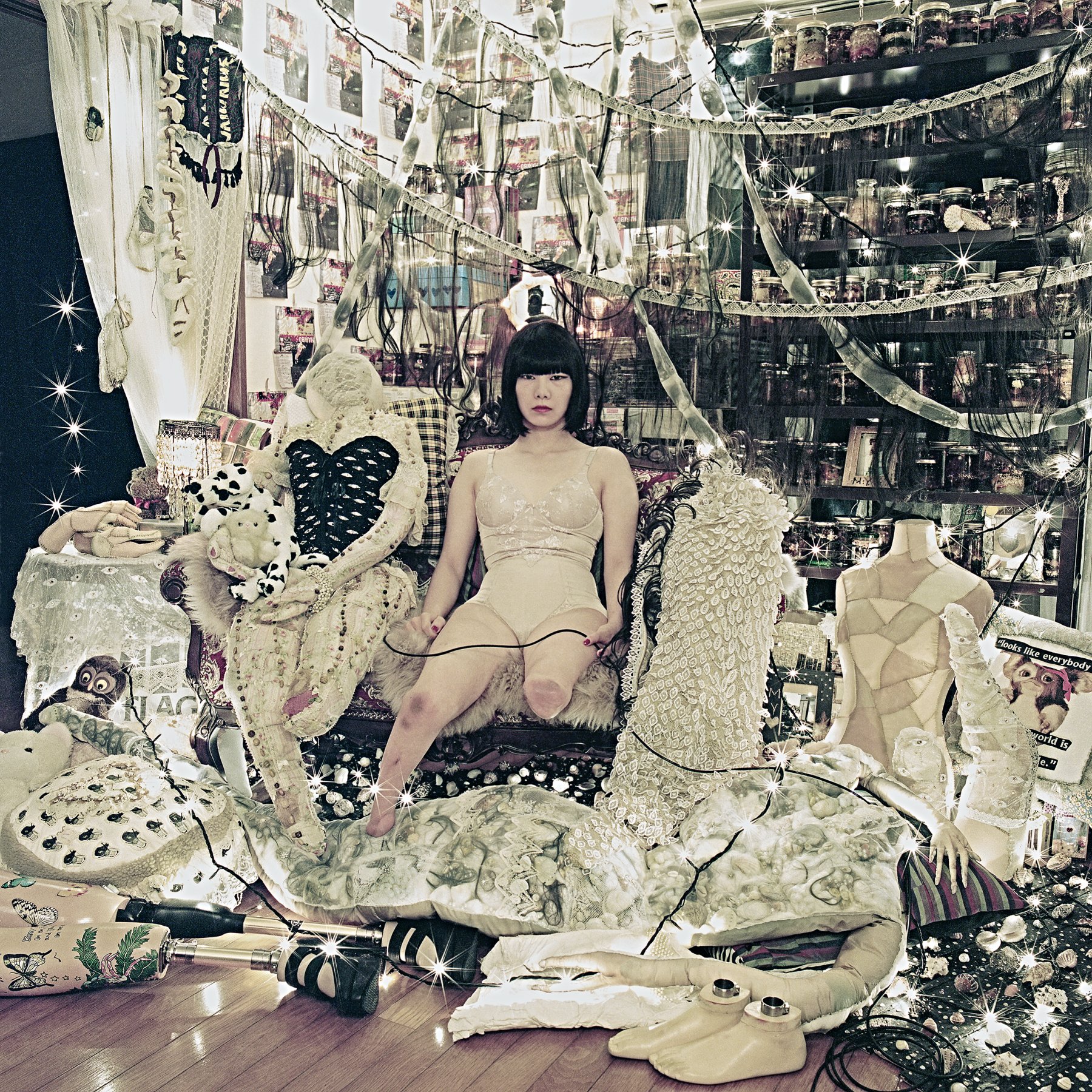 For the second exhibition of the season in the Studio –its space dedicated to emerging photographers– MEP pays tribute to contemporary Japanese photography with the work of Mari Katayama, which combines sculpture, sewing, performance and photography. This highly original and important artist, who was prominently featured in the 2019 Venice Biennale, is rapidly rising on the international scene.

Afflicted as a child with a rare medical condition, Mari Katayama decided, at the age of nine, to have her legs partially amputated, a situation she transcends in work that invites viewers to question their relationship to their own bodies. Her early self-portraits are performed or idealised versions of herself in which she places her face and body in intricately constructed sculptural environments, decorated with life-size dolls or with objects incrusted with crystals and seashells.

The resulting photographs are only the final steps in a process of production, installation and posing: a process she later extended through the fabrication of unique handmade frames and sculptural elements. Katayama’s total control over these excessive and beautiful constructions as well as her picturing of herself with them militate against conventional notion of ‘disability’. As such, Mari Katayama reveals herself to be a truly complete artist, one whose relationship to the camera is not only utilitarian and essential but also experimental and groundbreaking.

The exhibition Home Again not only brings together works from over ten years of Mari Katayama’s unique practice, but is also the occasion to present, for the first time, “In the Water”, a new body of work in which Katayama’s identification with the natural world is brought into conjunction with her ongoing examination of self-representation. This new work springs from the recent birth of her daughter, about whom the artist has acknowledged that fact that, finally, there exists in the world a being who regards her mother’s body as normal, a radical realization that led Katayama to rethink her own past attempts either to conform to or to picture, societal norms and expectations.

It also led her to a recent turn outwards in her work, away from the confines of the studio and into natural and man-altered environments. From the shores of Naoshima to the polluted landscape around her home in Gunma, Katayama engages in Home Again in constant questioning of the definition of what is “natural” and what has been “lost” or “damaged”, in terms of both the outside world and the self.

Mari Katayama was born in Saitama Prefecture, Japan, in 1987 and raised in Gunma Prefecture. She graduated from the Gunma Prefectural Women’s University, where she studied the history of art and aesthetics, before obtaining a master’s degree from the Tokyo University of the Arts.
Exhibitions of her work include those at the Aichi Triennale (2013) and Roppongi Crossing at the Mori Art Museum Tokyo (2016). Mari Katayama was included in the main curated exhibitions at the Venice Biennale in 2019. Her solo show On the Way Home was recently presented at the Museum of Modern Art in Gunma.
Mari Katayama suffers from tibial hemimelia, an extremely rare condition that caused malformations in her two legs and her left hand. As a child, Katayama was bullied by other children and kept away from school by her family. Since store–bought clothes did not fit, her clothing was made at home, and at a very young age, she learned how to sew from her grandmother. This inspired her first works, which took the form of hand–sewn, phantasmagorical cocoons and anthropomorphic pillows.
Surprisingly, Mari Katayama did not set out to be an artist. Her performance– like self-portraits were a way to enjoy the dressing up and role-play that were impossible for her as a child, and her stuffed and embroidered objects, inlaid with lace, seashells, hair and crystals, were made for herself. Using her body as a living sculpture, she also decorated her prosthetic legs with drawings, and performing by modelling high-heeled shoes and singing onstage, as if taking possession of her phantom limbs and transforming them.
In her photographic self-portraits, Mari Katayama explores the difficulties linked to her body and identity and reframes the loneliness she felt as a child. In so doing, she questions social norms, inciting the viewer to rethink the way ideals of beauty are shaped and to reflect on the challenges and fears she faces every day.