Skarstedt presents the first major exhibition dedicated to Martin Kippenberger (1953 – 1997) in France since 1996: a selection of paintings from his prominent Fred the Frog series in dialogue with six Laternen, urban lamp sculptures. 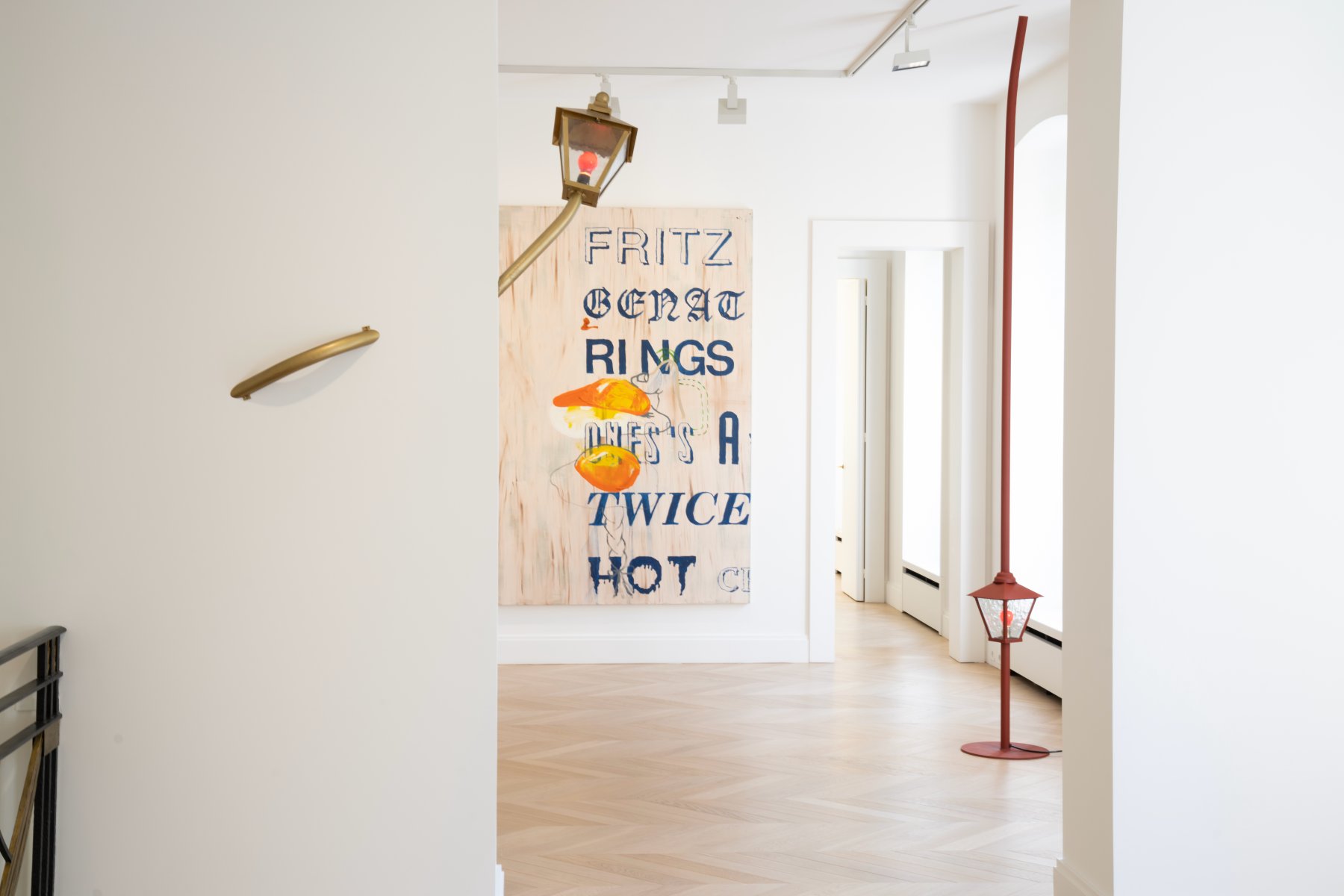 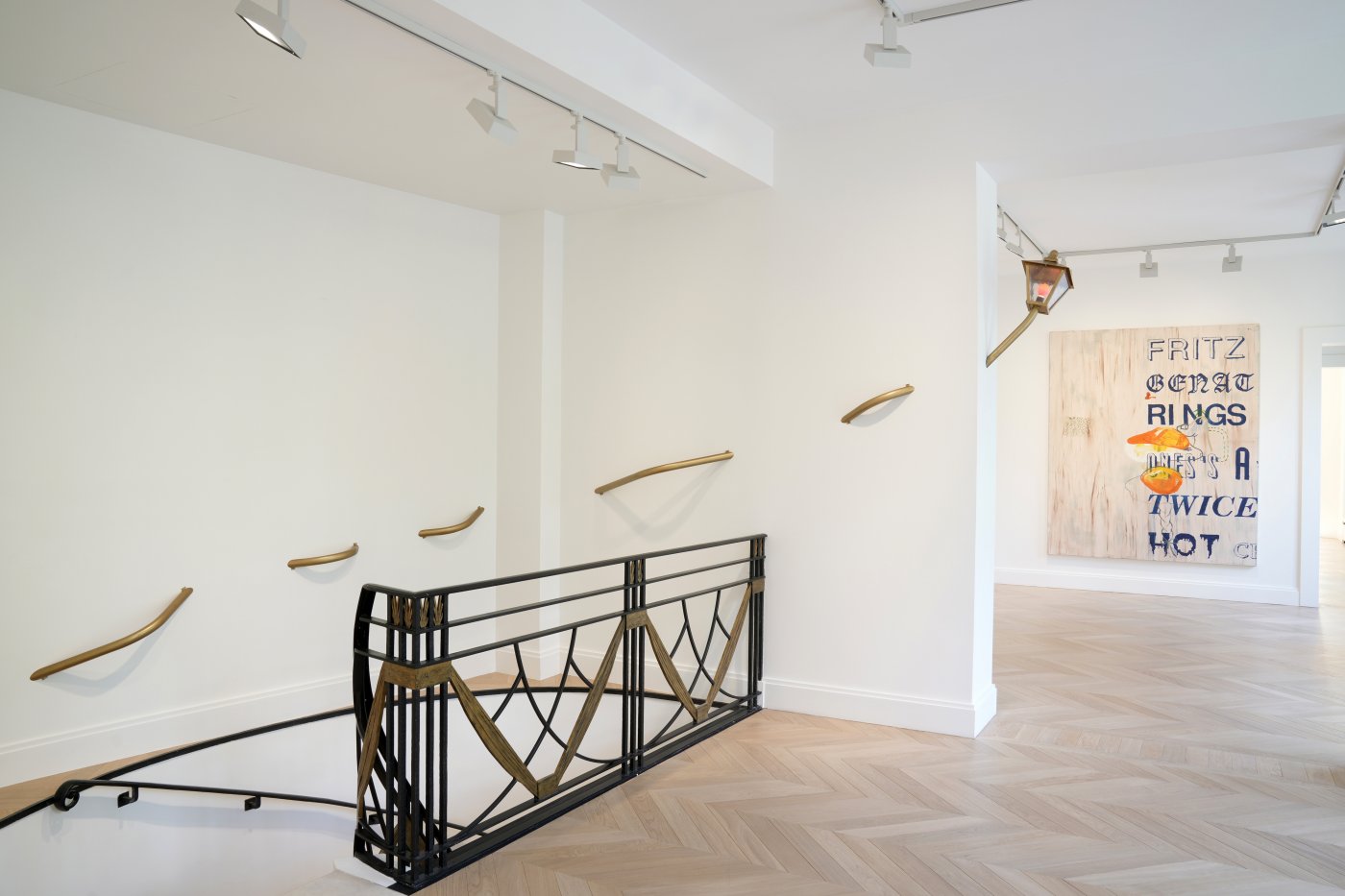 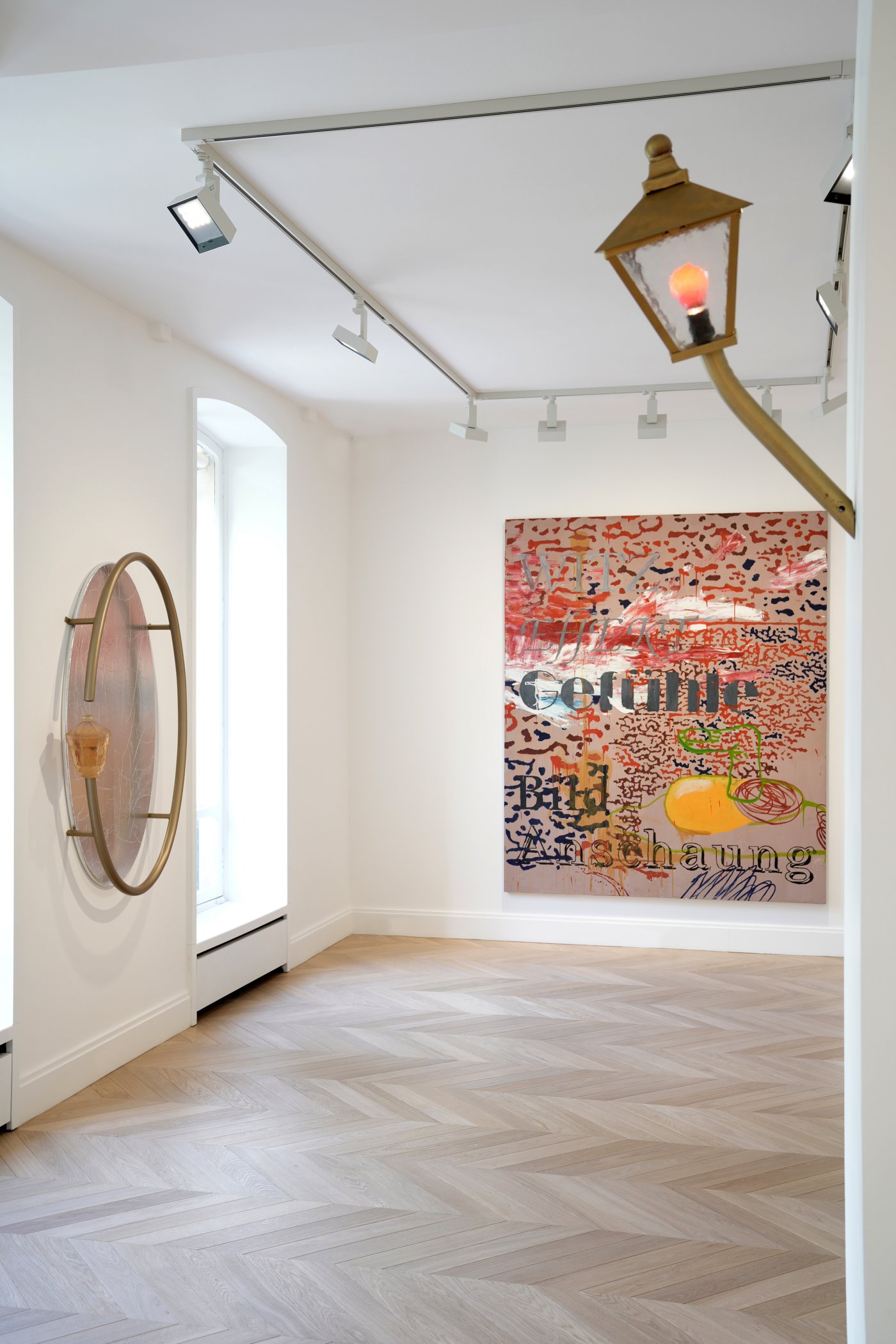 Fred the Frog, both a self-portrait and a caricature, is the main character of these compositions, where the provocative motif of the crucifix is recurrent. Created mainly in Los Angeles between 1989 and 1990, with the exception of one work conceived in Seville, this series encapsulates Kippenberger’s relationship with himself and his perception of the role of the artist in society.

All of the paintings in this series are similarly complex in their construction and require a gradual deciphering. Fragments of poems and suggestive words such as “vision,” “joke,” and “feelings” are intertwined with a variety of Kippenberger’s own symbols. Satirical images such as a beer mug and a cross are superimposed over hands and eggs, leitmotifs Kippenberger would continue to return to, in turn giving rise to two celebrated corpus of works: Hand Painted Pictures (1992) and Eggman I and II (1994).

The common denominator of these compositions is the omnipresence of transformative processes: from egg to tadpole, from tadpole to frog, from frog to artist, from artist to crucified figure. Or again, from spectator to spectacle, from man to woman, from the condemned to the savior, from irreverence to gravity. It is always the principle of metamorphosis that animates this series.

The provocative nature of these motifs is undeniable. A sacrilegious gesture, Kippenberger substitutes man, or God, with an animal nailed to a cross. However, Manfred Hermes argued that this idea of a “cross that the artist must bear” does not have a blasphemous intention. The frog is conceived rather as an alter-ego with whom the artist identifies insofar as he is metaphorically nailed to his own canvas frame. He is a sacrificial victim who refuses to compromise his work despite adverse criticism, which prevents the frog from turning into a charming prince. This body of work would open the way for the piece titled Martin, Into the Corner, You Should Be Ashamed of Yourself, 1989/90.

“There is no need to go to the museum, everything is in the street. The streets are full of incentives to build your own world, a fun world. I am for a joyful world (…) An encounter with a fridge can suddenly make you laugh. This kind of journey allows you to bring the ideas back to their origin, while making a detour. That’s why I reconstruct some of the things I find on the street.”

The Laterne (Lamp) sculptures are inspired by the popular cartoon imagery of the undulating lamp post, a nocturnal companion for lost drunkards. Playfully climbing the wall or bending in a polite bow to the viewer, the Laterne works seem anthropomorphic, their lit-up “heads” looking out in animated address. The photographs taken for Kippenberger’s book Psychobuildings in 1988, as well as Picabia’s Portrait Pour Rire (Portrait for Laughter, 1915), dedicated to Max Jacob, further influenced these sculptures. The streetlamp quickly became Kippenberger’s trademark and a focal point for his sculptural practice, enabling him to explore the limits between object, art, and architecture as a source of inspiration to elevate these seemingly functional objects. Begun in 1988, the works from this series appeared in some of the artist’s most important exhibitions. Laterne an Betrunkene (Street Lamp for Drunks, 1988), the first sculpture in the series, was widely acclaimed when exhibited at the Venice Biennale the same year.