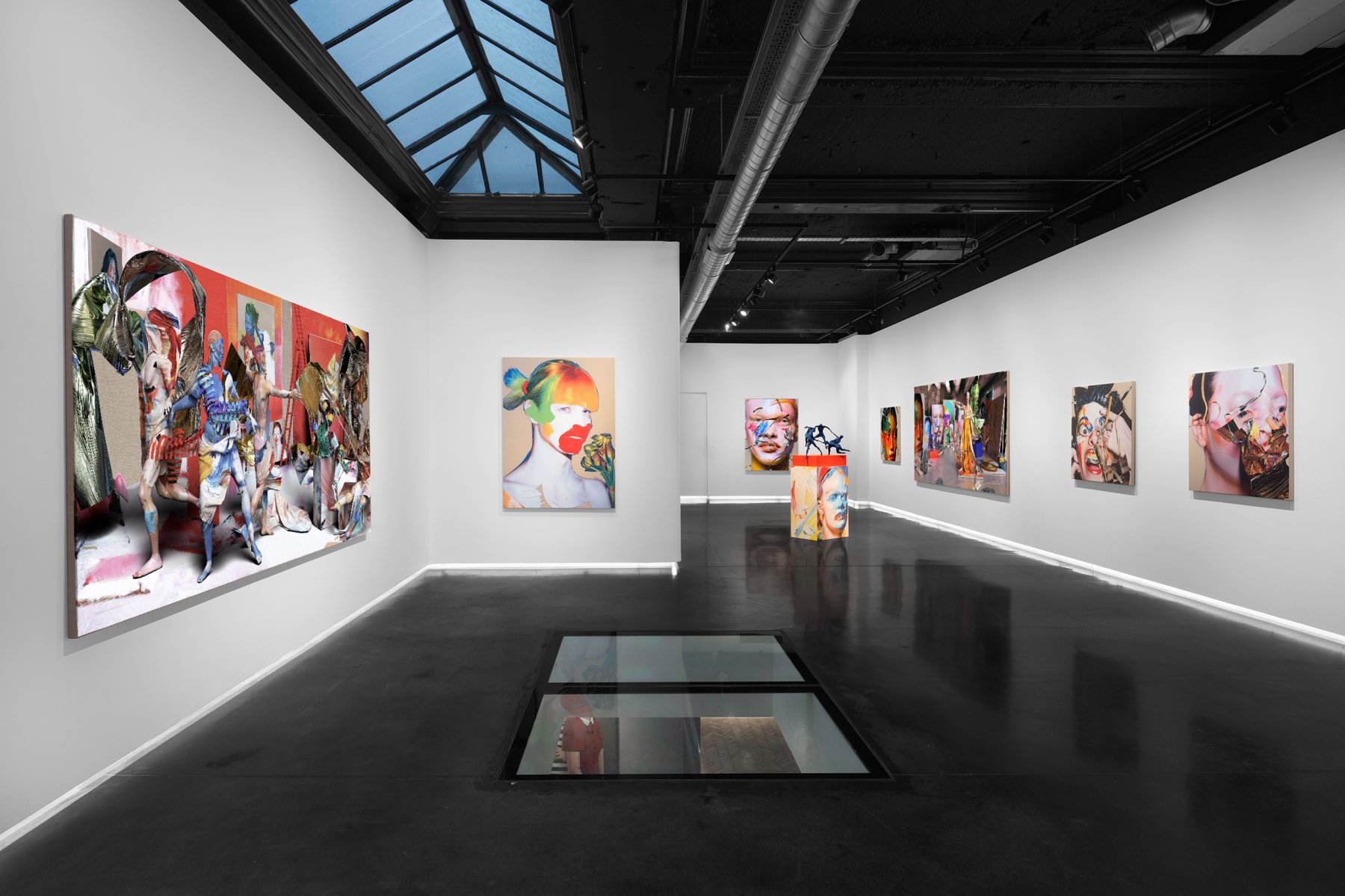 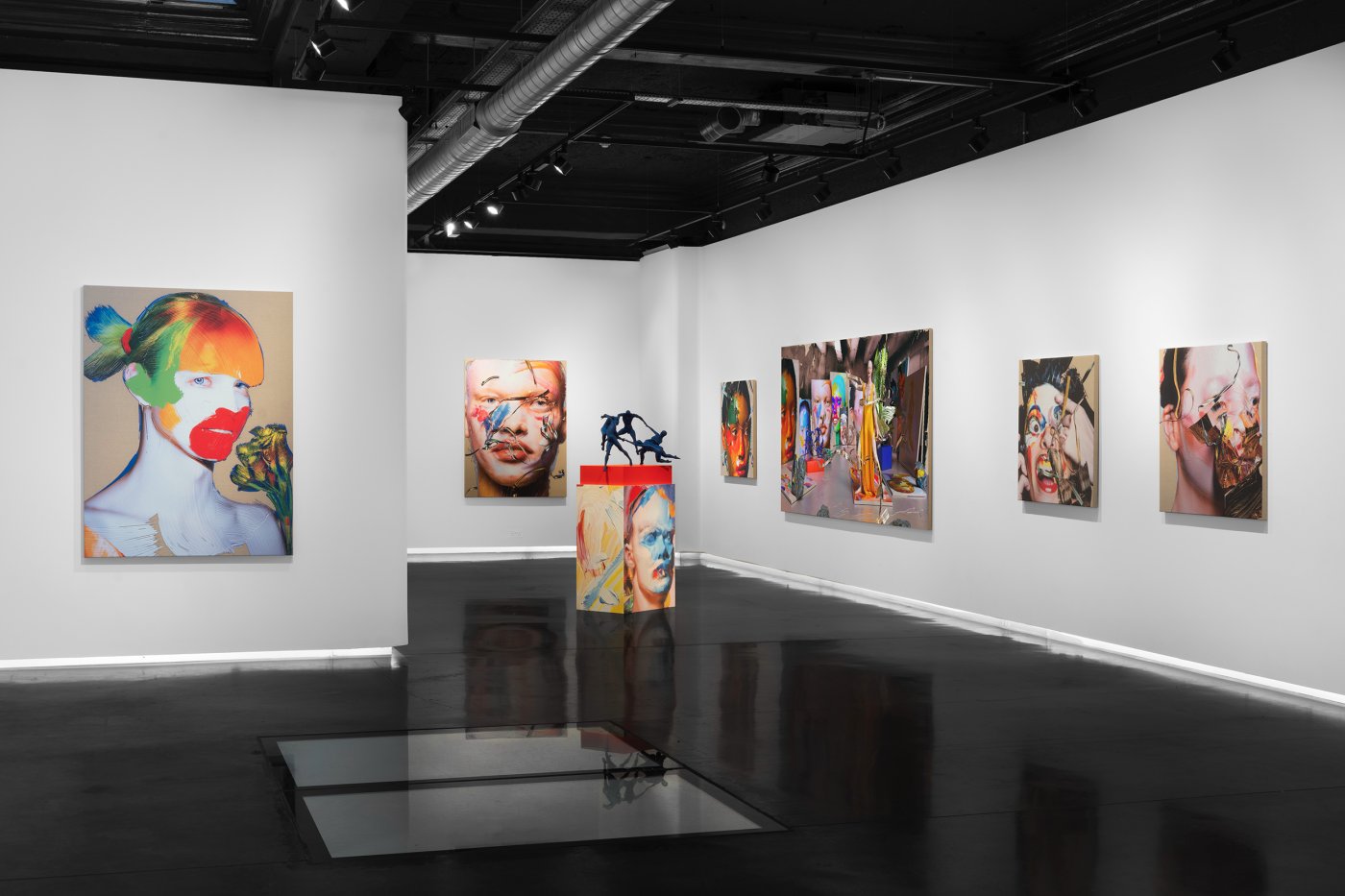 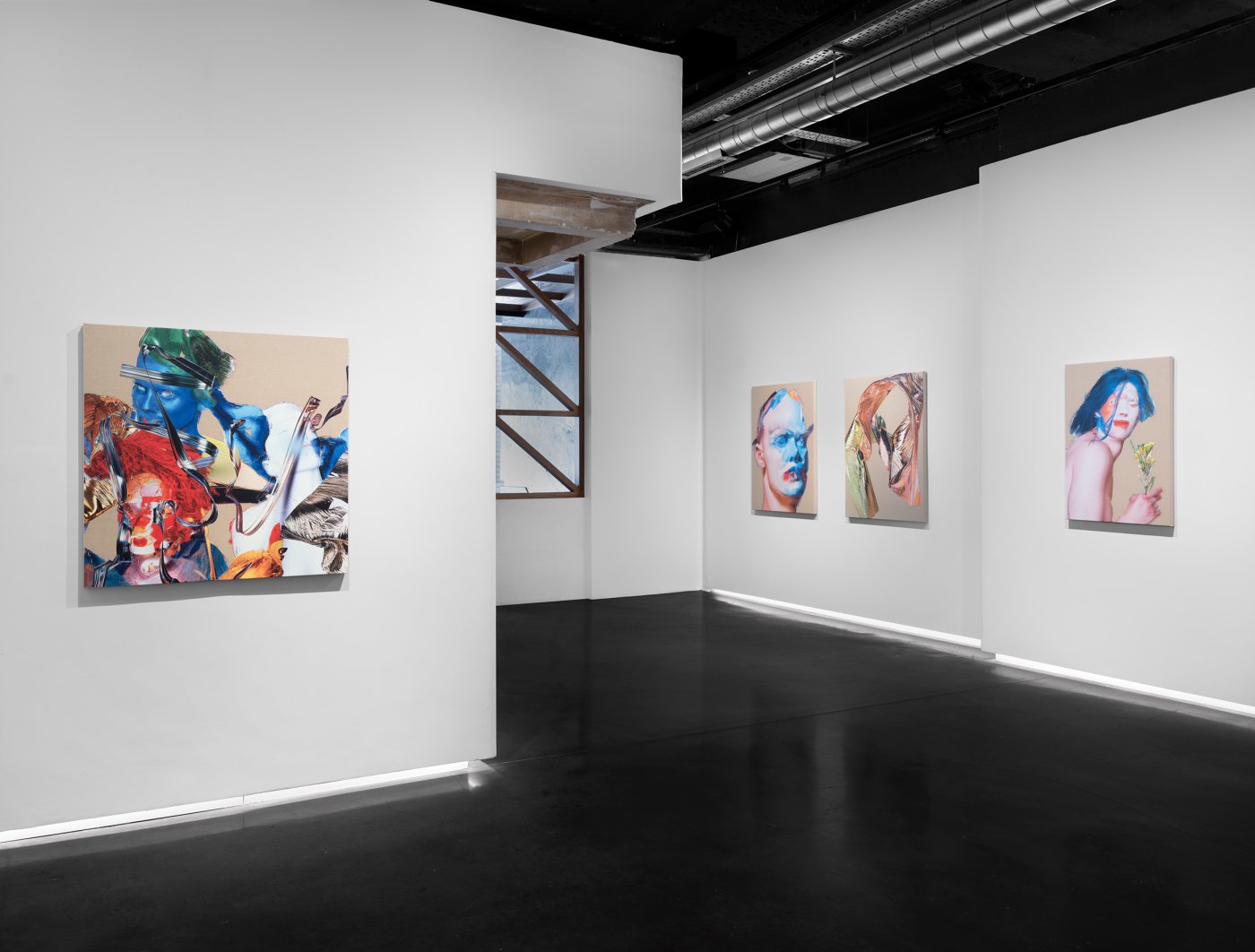 Using repeating imagery across these varying forms, Virtual Paintings charts a network of constellations all united by Stone’s unmistakable and poetic visual language. The exhibition looks to artistssuch as Henri Matisse and Roy Lichtenstein, who famously rendered artist’s studios and inserted representations of their own existing artworks into the resulting pieces. Following this mise en abyme effect, Stone repeats this visual trick in reverse. He has included depictions of his own new AI-assisted paintings within three large scale and intricately composed linen canvases. These virtual AI paintings have also been devirtualised. Stone has fabricated them in physical form, displaying them on the walls of the gallery, mapping a constellatory relation to the works in which they also appear.

In a uniquely hybrid process, Stone begins with hand-painted brushstrokes, which he first paints onto glass before photographing and cutting them out to establish a digital archive of individual painterly marks. These brushstrokes then imprint and drape around Stone’s virtual 3D models who populate his vibrant and ethereal canvases as painted avatars. Diverting from this established digital painting practice, he has now incorporated the AI system, DALL·E 2, into his work. This AI system is largely known for generating images from text prompts, but is also able to create variations from existing images. Stone uses the latter process to interpret his own paintings and produce material for new works. Through this cross-disciplinary practice, Stone’s exhibition challenges a narrative that unthinkingly divorces the analogue from the digital. Instead, Virtual Paintings proposes that image making, analogue or digital, creates its own “virtual reality” for the viewer, that is dependent on the physical. Be it on a screen or canvas, hanging on the walls of a gallery, visual art creates illusionistic worlds. As such, in his own words, Stone commits to a “non-dualist position situated in the embodied materiality of both ‘digital’ and ‘physical’ realms.”

One of Stone’s large scale pieces, The Red Studio, borrows its composition in part from Nicolas Poussin’s A Dance to the Music of Time. The painting bustles with Stone’s expressive flourishes of paint and avatars who join together in a recreation of the dance that enlivens Poussin’s 17th century masterpiece. The Red Studio’s title and its red walls recall Matisse’s 1911 painting, L’Atelier Rouge, reminding us of the connection between Matisse’s subject matter and Poussin’s dance. Equally, Stone has included sculpture in his exhibition, replicating Matisse’s Dance in three dimensions. As well as being fabricated as a physical sculpture, like many of the works within the show, the artwork appears within two other works, namely The Basement Studio and The Blue Studio. This process of reproduction collapses and acknowledges multiple art historical threads, bringing them together in a network of influence.

Through these representations within representations, Stone strives towards a cognitive shift. In theme and practice, his artworks trouble the apparent hierarchies of the artistic process by choosing not to privilege the analogue over the digital or vice versa. By drawing on the legacy of Old and Modern Masters, the artist recognises that what we might now think of as “virtual realities” have long played a part in the history of image making.

Courtesy of the artist and Unit London