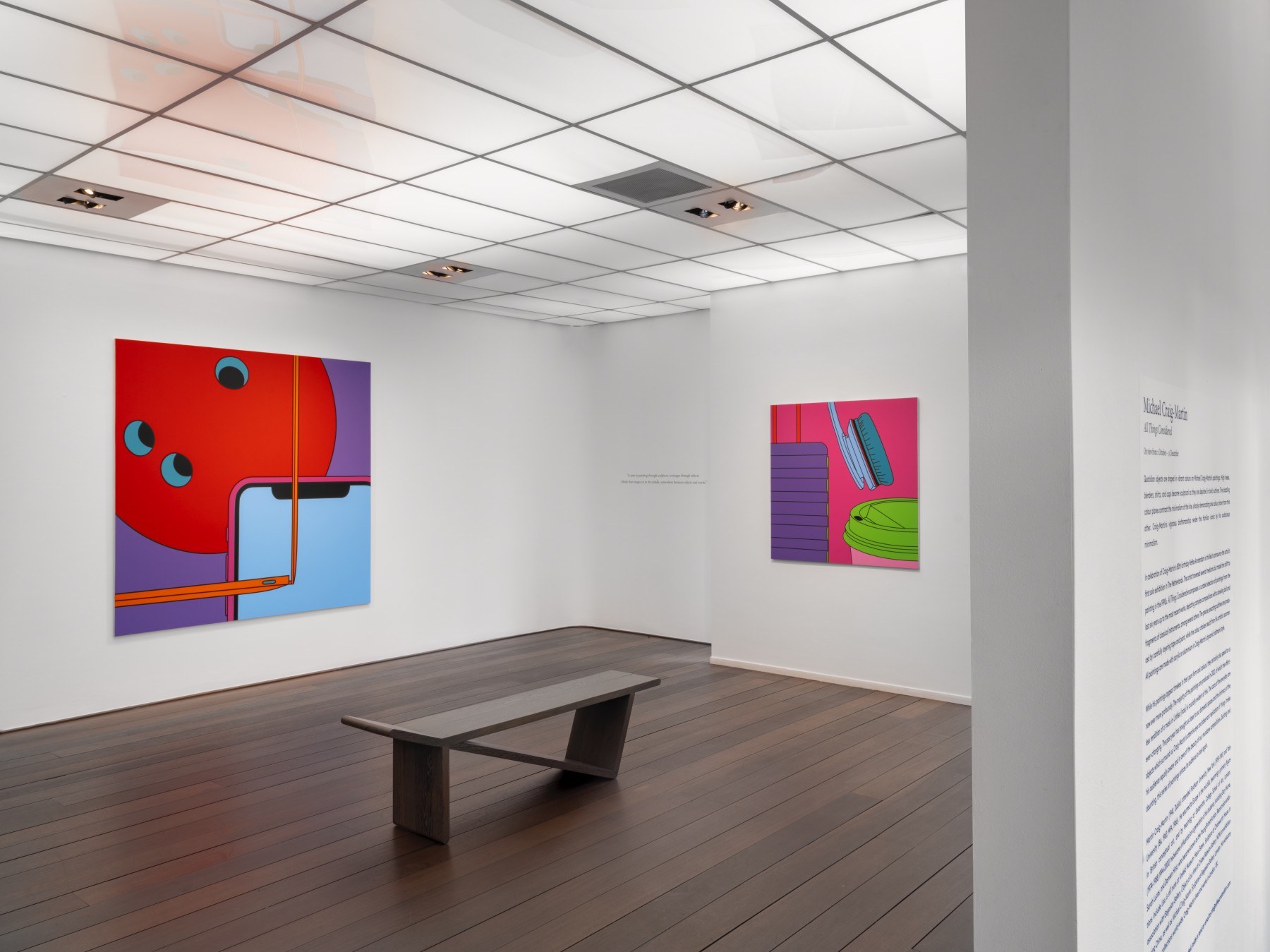 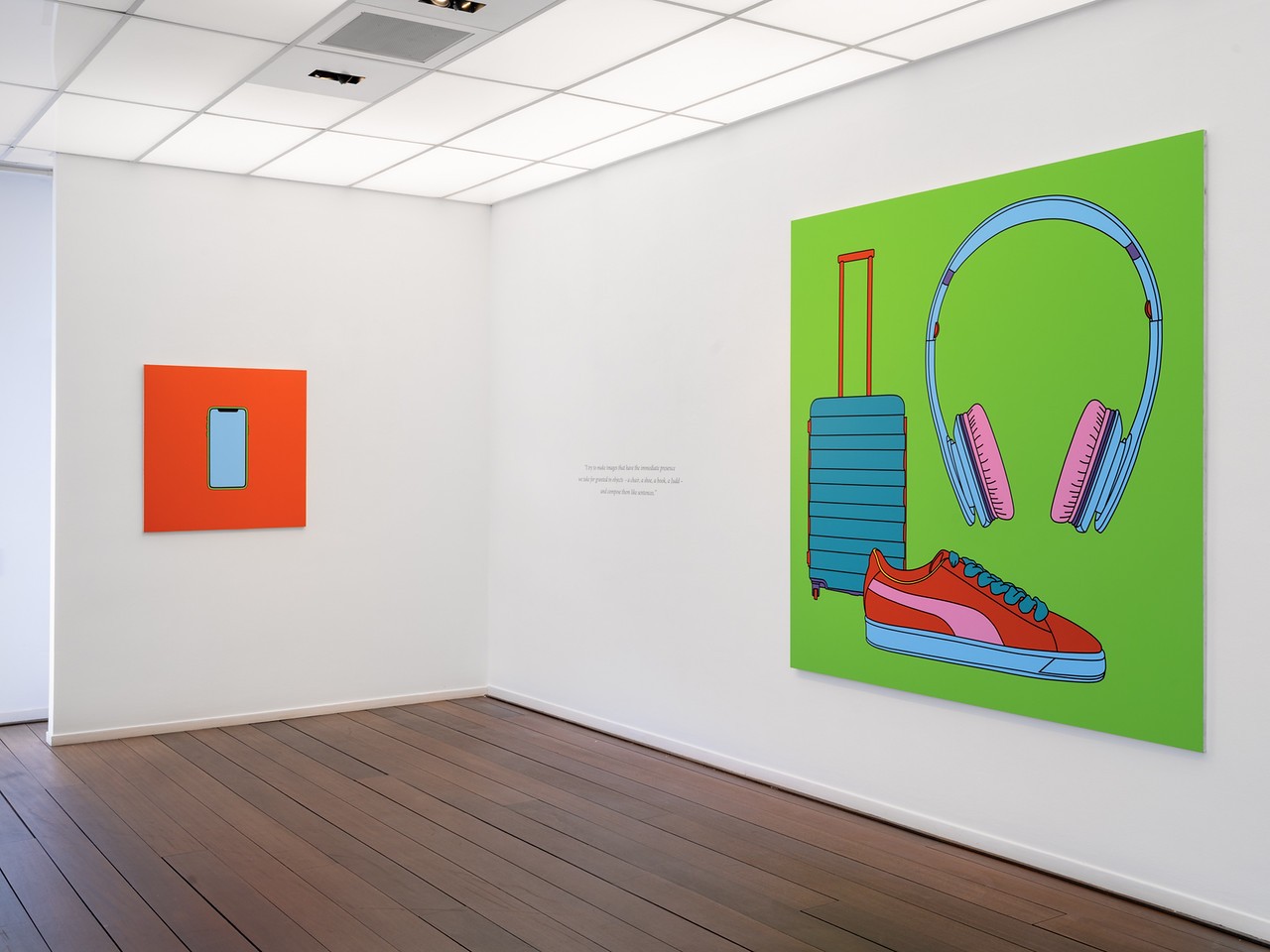 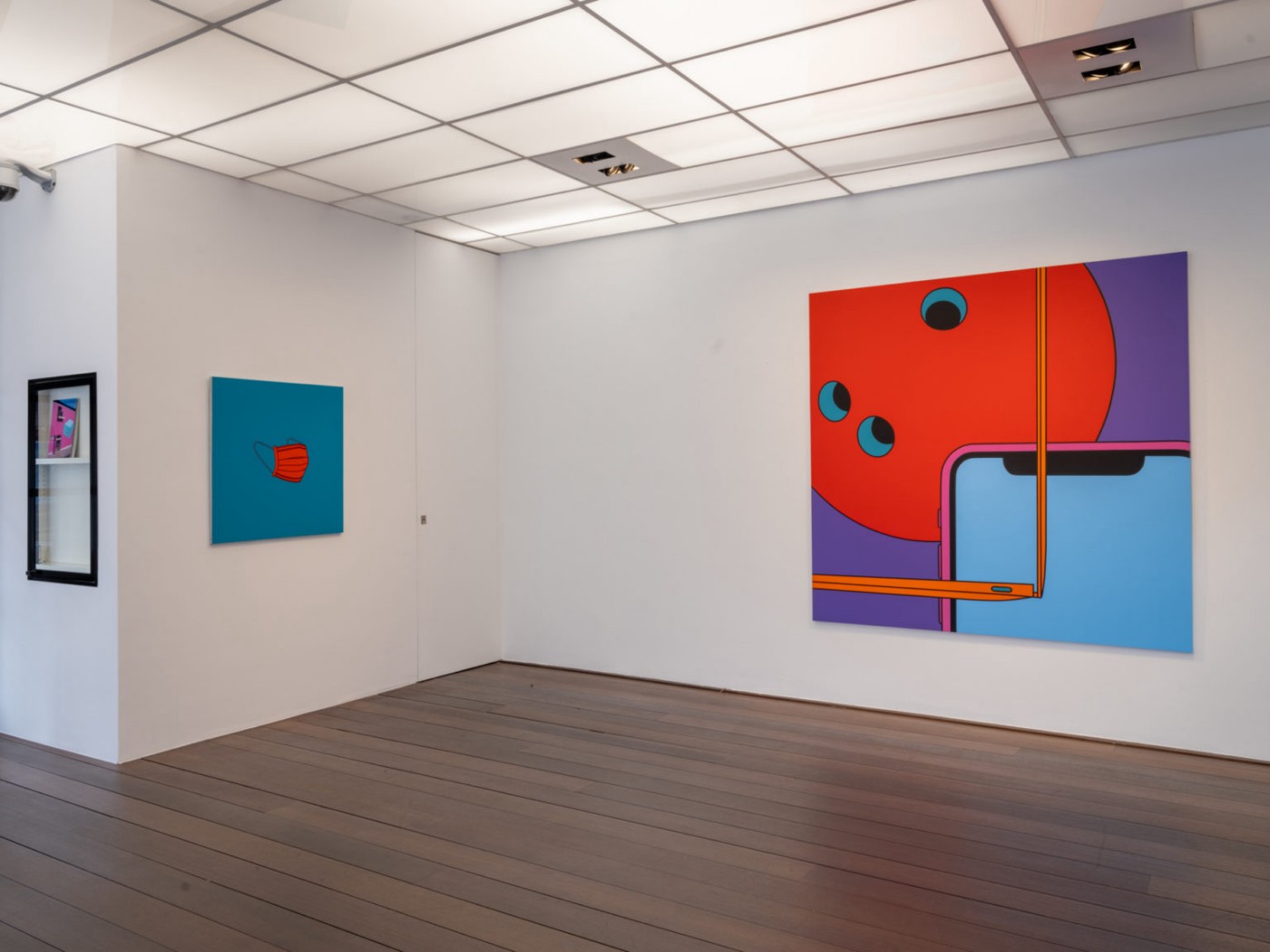 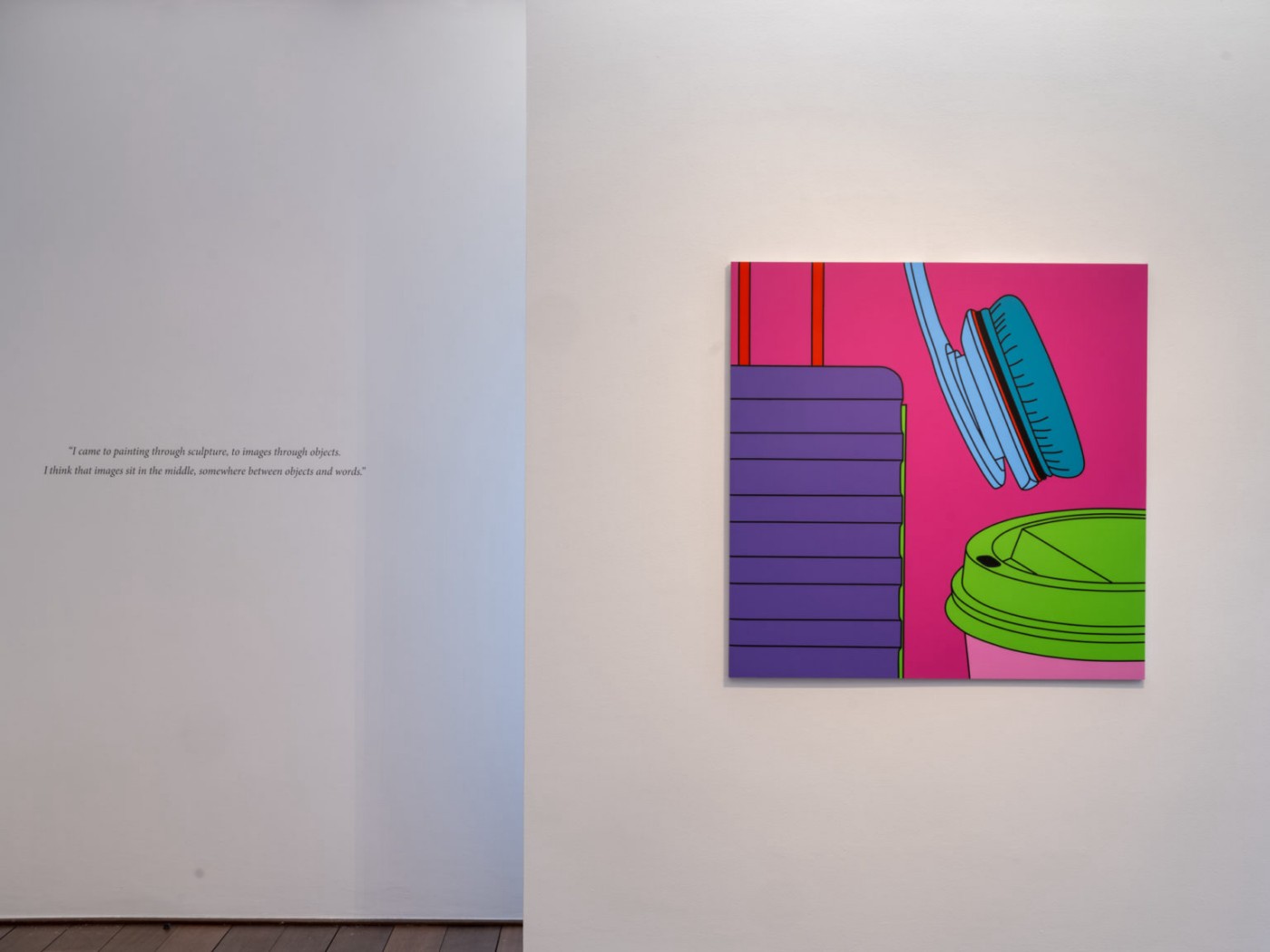 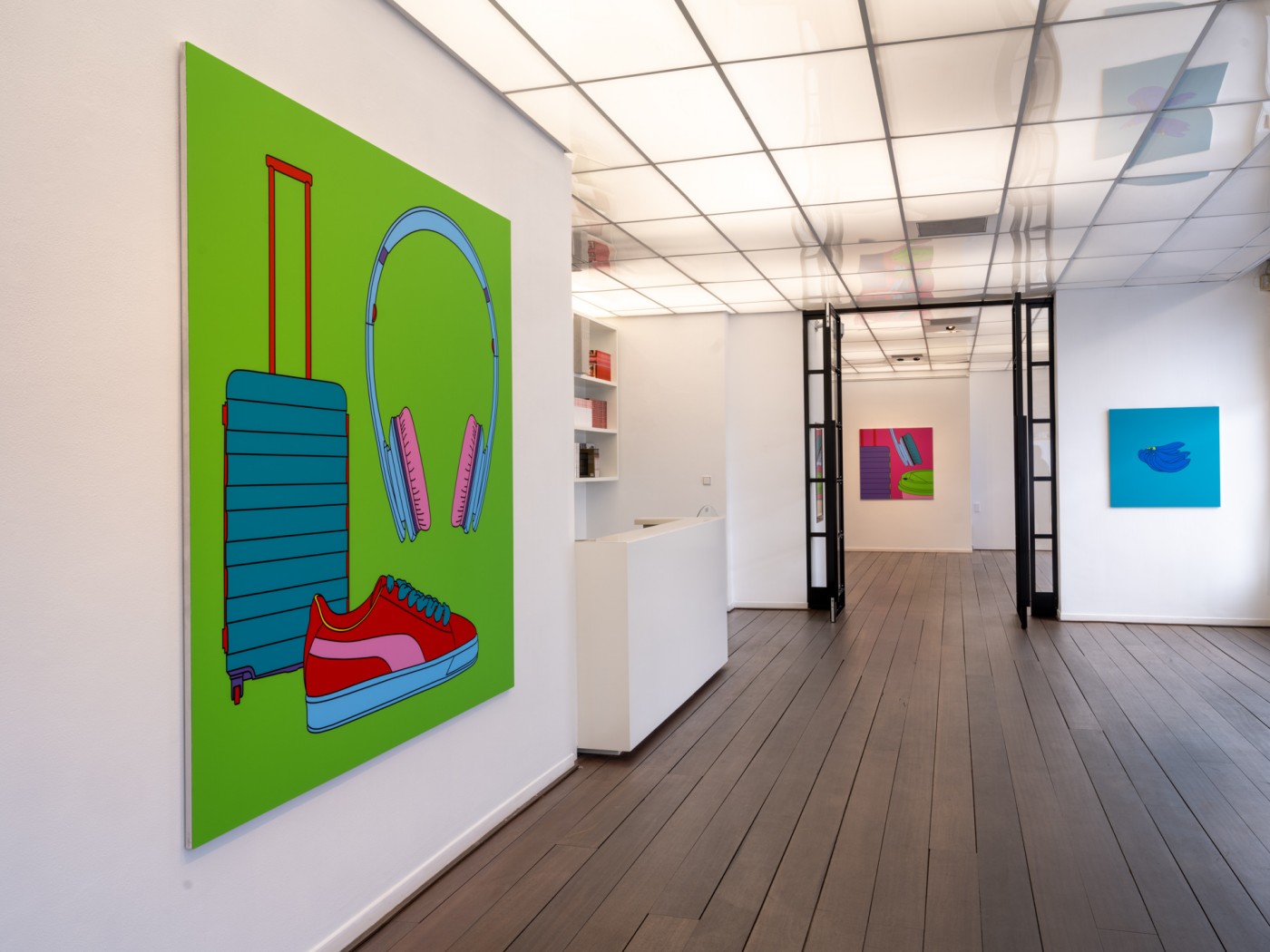 Quotidian objects are draped in vibrant colours on Michael Craig-Martin’s paintings. High heels, blenders, shirts, and caps become sculptural as they are depicted in bold outlines. The dazzling colour planes contrast the minimalism of the line, sharply demarcating one colour plane from the other. Craig-Martin’s vigorous draftsmanship render the familiar iconic by his audacious minimalism.

In celebration of Craig-Martin’s 80th birthday Reflex Amsterdam is thrilled to announce the artist’s first solo exhibition in The Netherlands. The artist traversed several mediums but made the shift to painting in the 1990s. All Things Considered, encompasses a curated selection of paintings from the last six years up to the most recent works, depicting complex compositions with a bowling ball and fragments of classical instruments, among several others. The precise, exacting outlines are produced by carefully layering tape and paint, while the colour choices result from his artistic acumen. All paintings are made with acrylic on aluminium in Craig-Martin’s dynamic hallmark style.

While his paintings appear timeless in their pure form and colours, they certainly also speak to us now ever more profoundly. The majority of the paintings are produced in 2020, of which the effortless rendition of a mask in Untitled (mask) is crucially evident of this. The icons of the everyday are ever-changing. The past year has brought us closer to our domestic spaces and the intimacy of the objects which surround us. Craig-Martin’s attentive eye and observant replication of ‘things’ make his audience equally aware and in awe of the beauty of our mundane compositions. Exciting and daunting, this series of paintings entices its audience to look again.

Martin Craig-Martin (1941, Dublin) attended Fordham University, New York (1959-1961) and Yale University (BA, 1963; MFA, 1966). He returned to Europe in the mid 60s, becoming a primary figure in British conceptual art, and by teaching at Goldsmiths College School of Art, London, (1974-1988;1994-2000) he became influential on a generation of his students, including Gary Hume, Sarah Lucas, and Damien Hirst, who became known as the Young British Artists. Recent solo exhibitions include Less is still more at Krefeld Museum Haus Esters, Sculpture at Chatsworth House in association with Gagosian Gallery, Objects of our time at Cristea Roberts Gallery, NOW, an exhibition touring China, as well as Michael Craig-Martin: Sculpture at Gagosian Gallery, London. His works are held in major collections world-wide. Craig-Martin lives and works in London, UK.

Courtesy the artist and Reflex, Amsterdam