Music from far-away parties, today’s banquets and those from long ago – all on the same very long table. — Miquel Barcelò

Grisailles is an exhibition of paintings by Mallorcan artist Miquel Barceló, featuring his new series of large-scale still lifes with sea creatures, flowers and bones in monochromatic hues. Taking place in the gallery’s Pantin space, the exhibition will be punctuated by paintings of bulls and wild animals, all rendered in translucent layers of colour that pay homage to the tradition of grisaille painting. 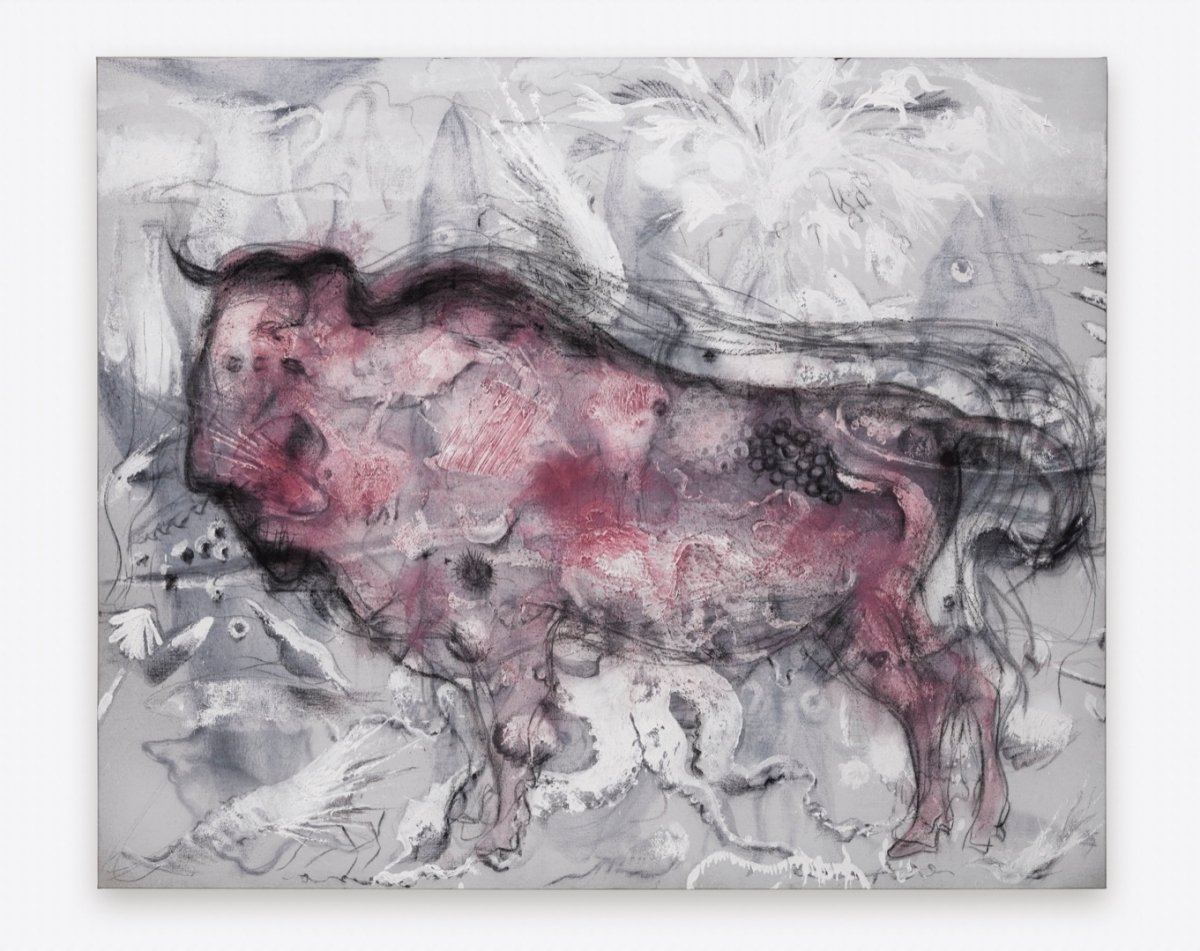 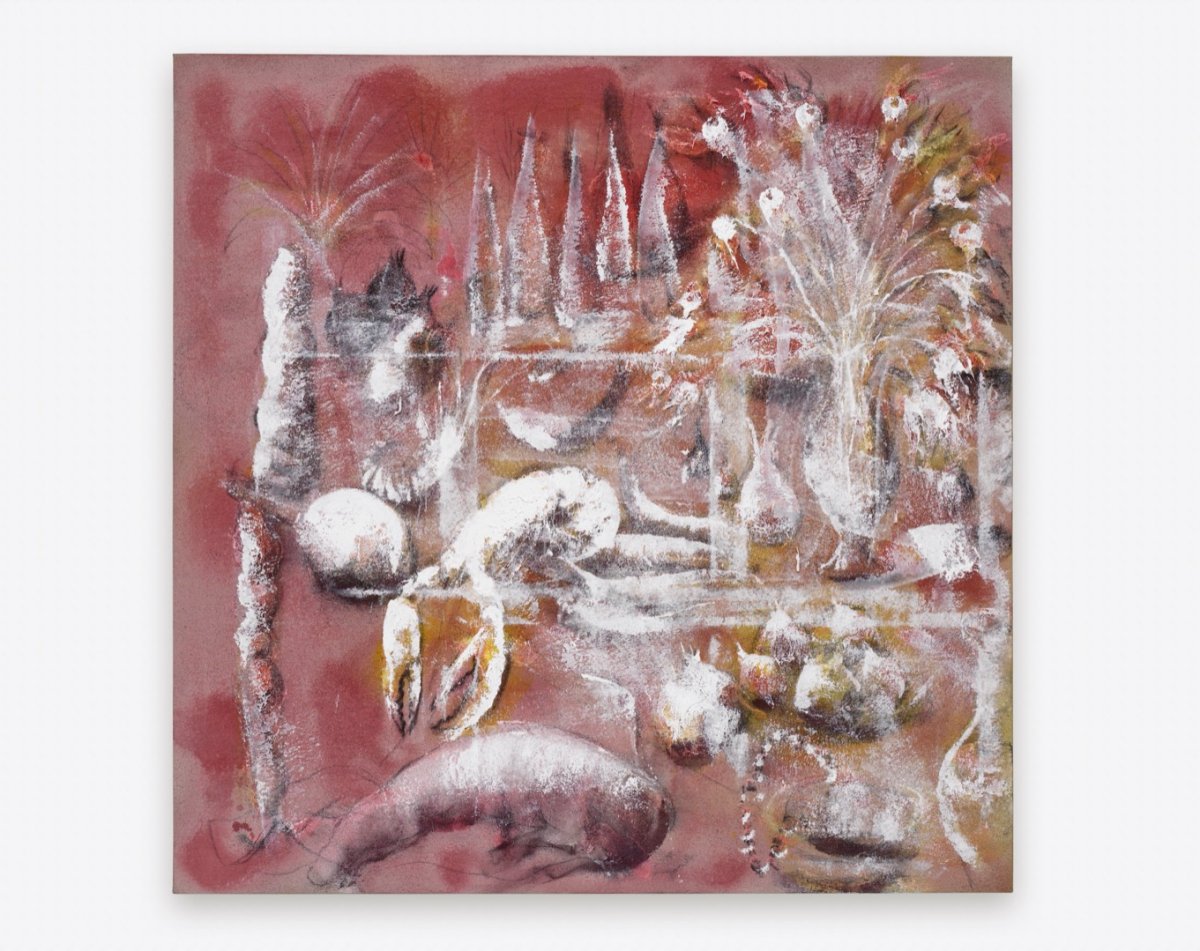 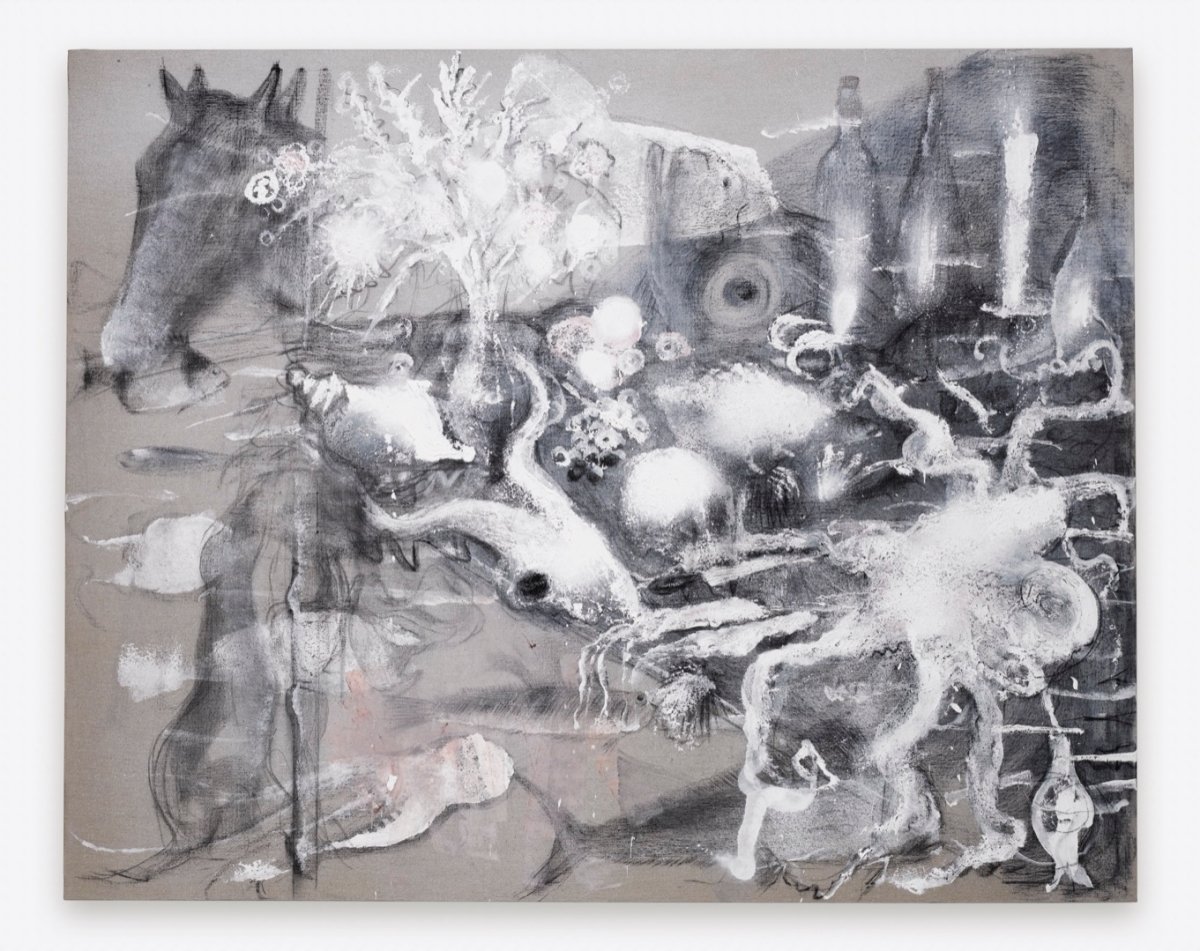 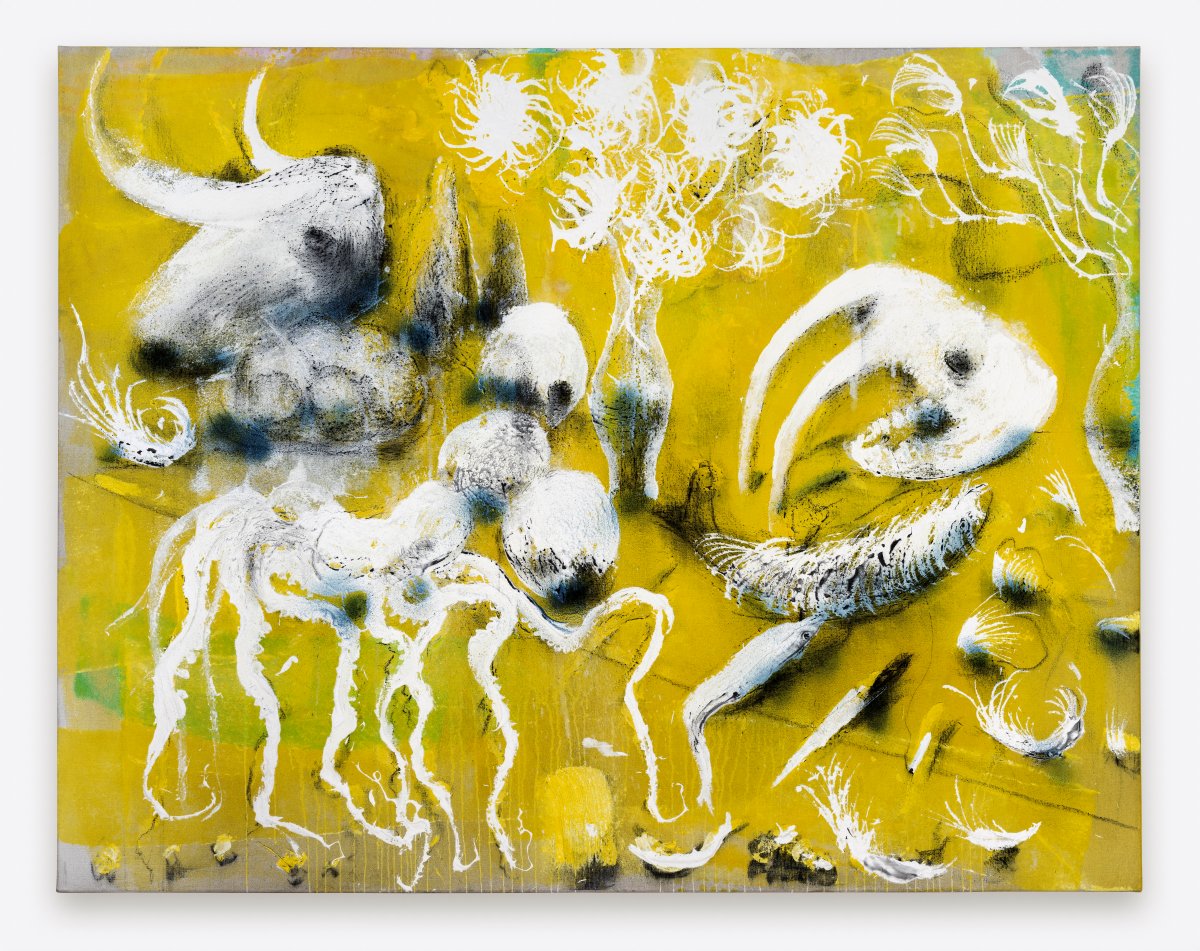 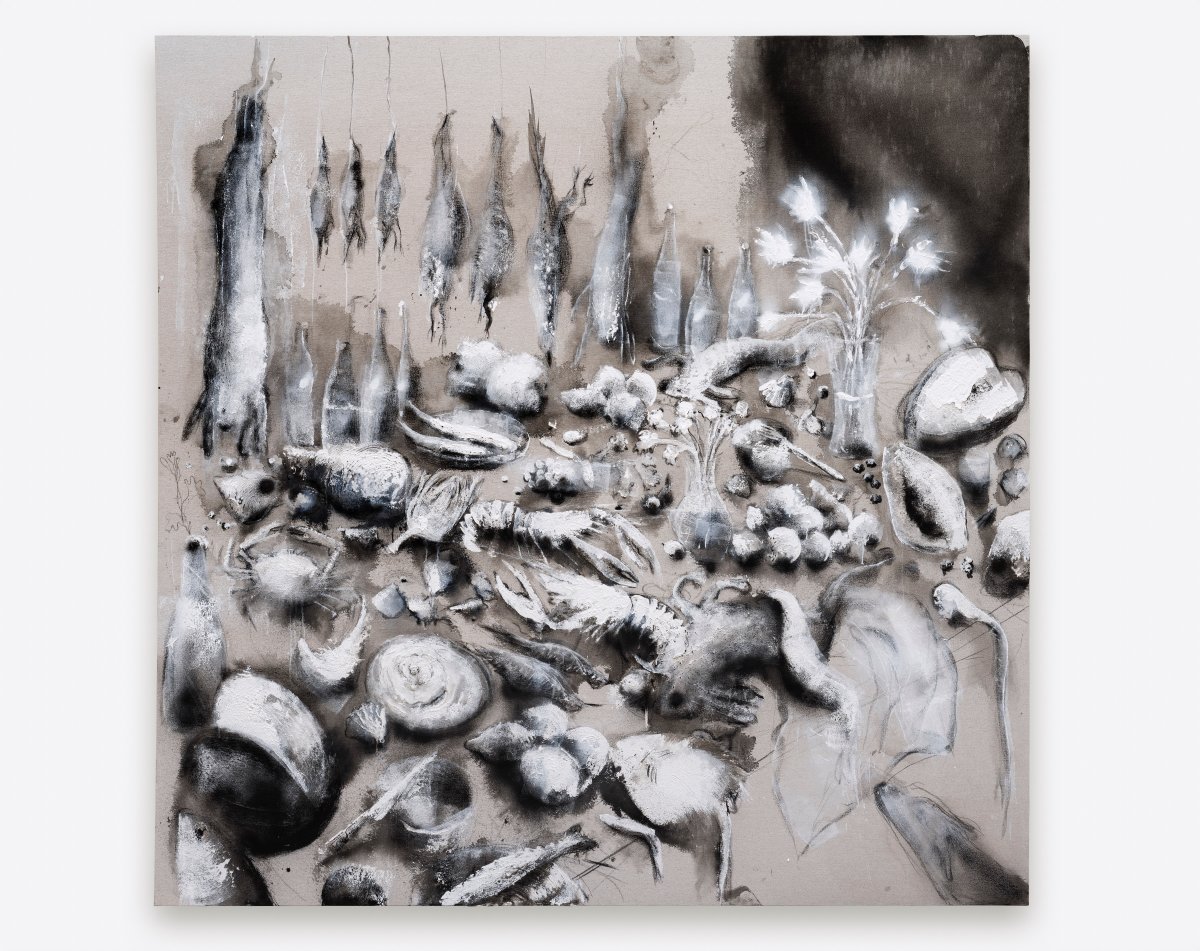 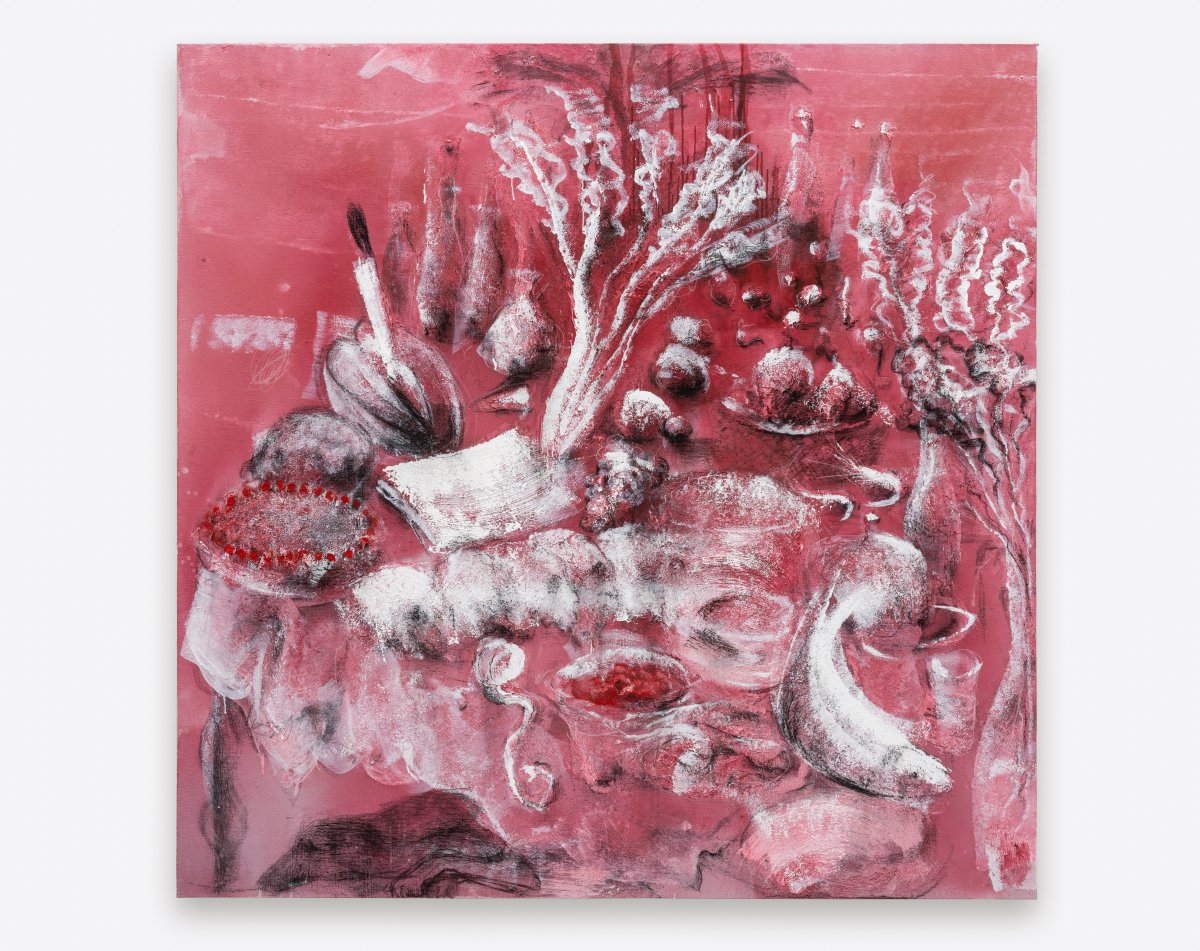 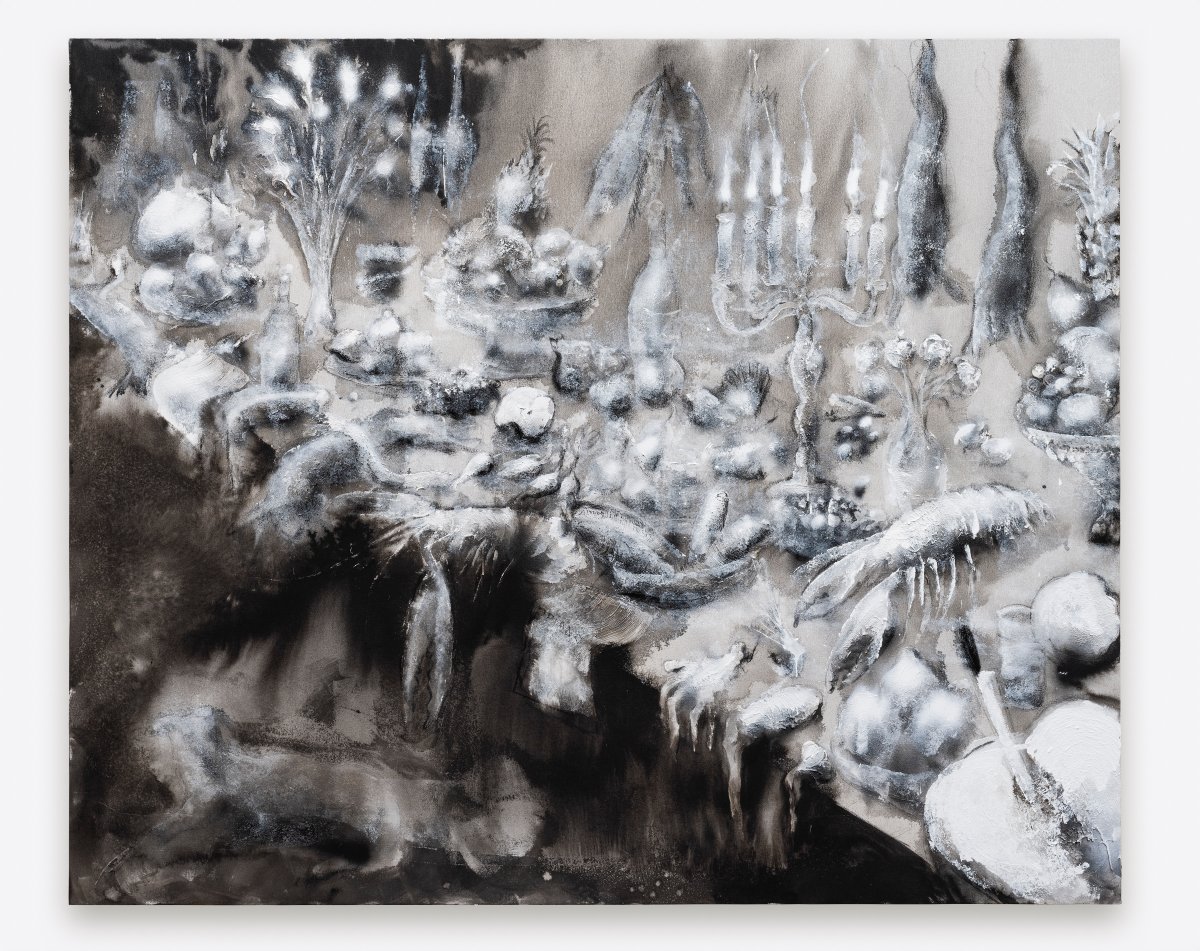 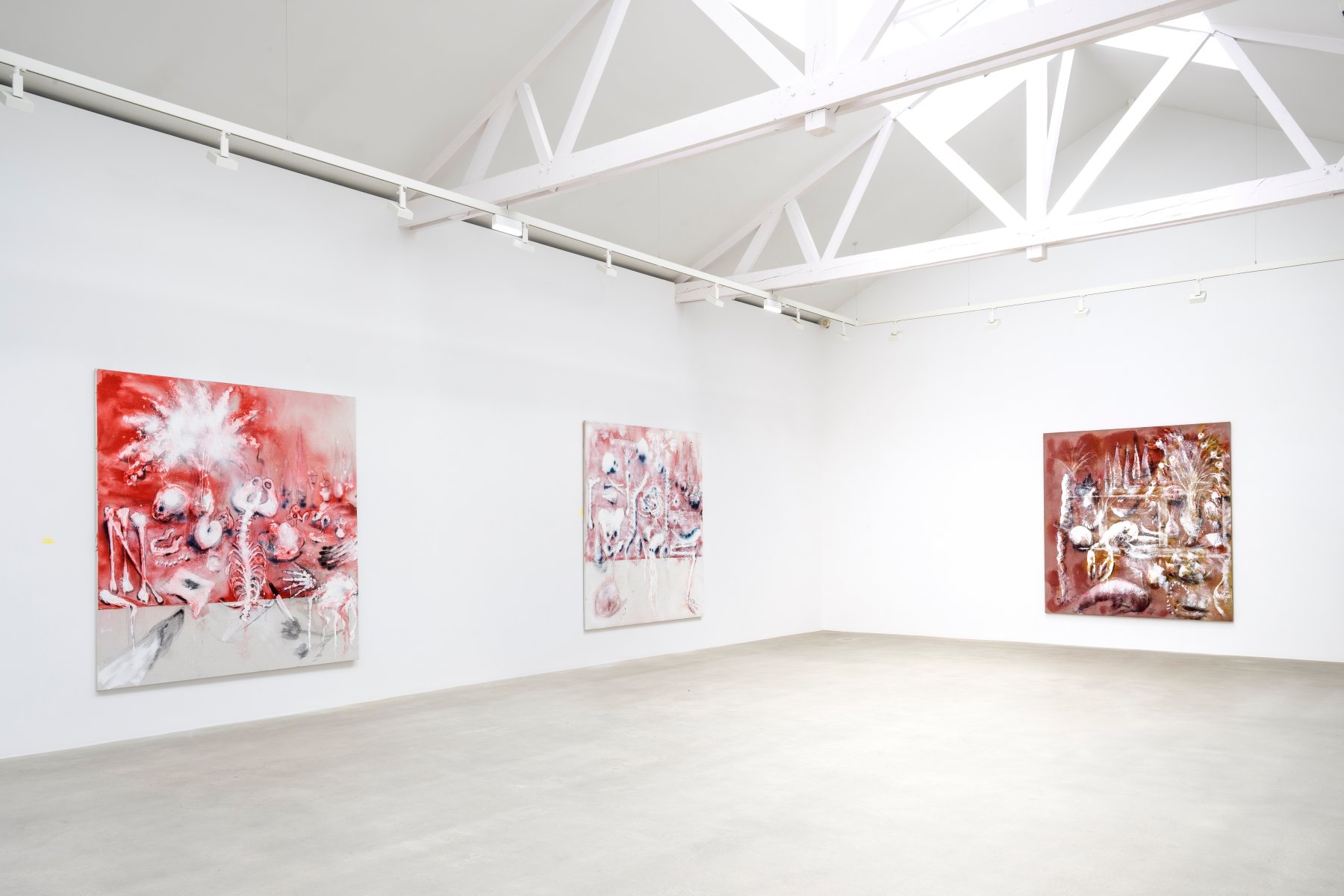 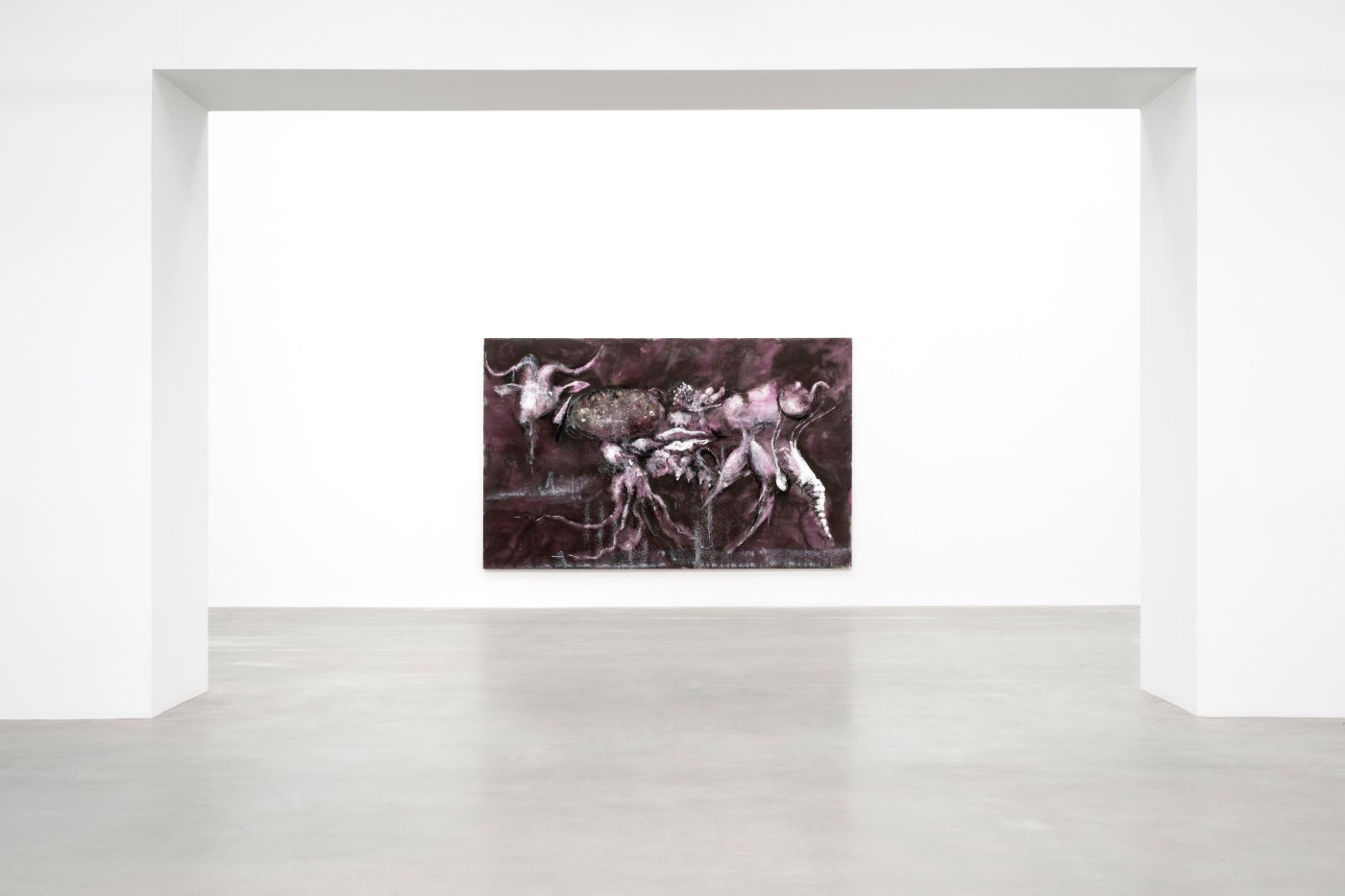 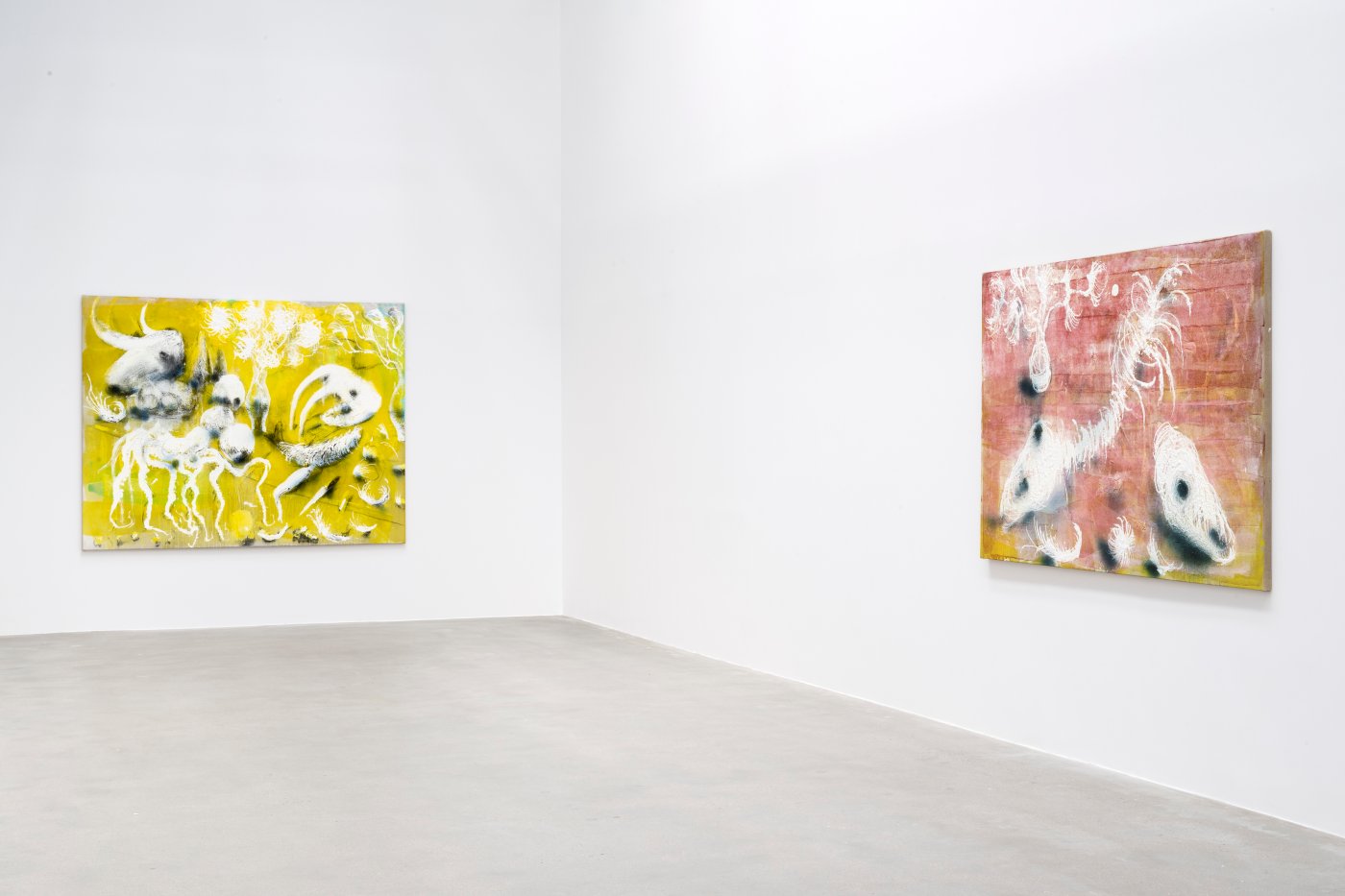 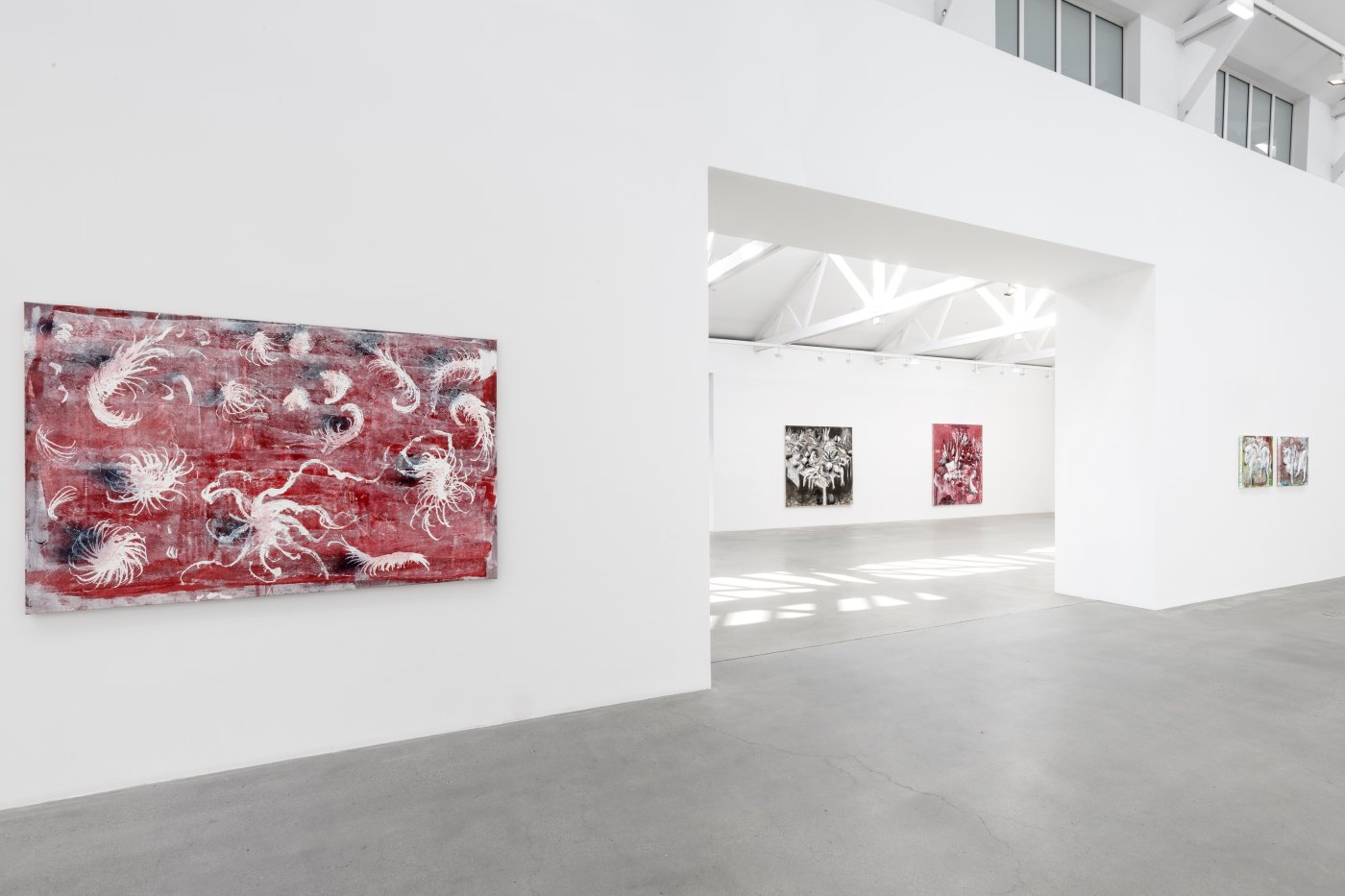 One of Spain’s most acclaimed contemporary artists, Barceló’s practice is influenced by his Mallorcan surroundings, as well as his deep knowledge of the history of art. In the series on view in the exhibition, he draws on 17th-century Dutch painting and the Spanish bodegón to offer a new interpretation of still life painting that is anchored in his own relationship to the sea, sustenance and the cycle of life. Reprising the genre’s traditional codes, he bisects his canvases with life-sized tables, inviting visitors to participate in the curious banquet before them where they might contemplate their relationship with abundance.

Known for the richly textured, sedimented surfaces of his works, Barceló takes a different approach in this exhibition, adopting a variation on the traditional grisaille technique, where translucent layers of colour are applied over a monochromatic underpainting. The result is a group of paintings that are airier and more loosely composed than the artist’s previous treatment of still lifes, allowing the grain of the canvas to show behind the thin layers of ink and acrylic red, pink, blue and yellow. The absence of relief and the blurred outlines of the objects depicted by the artist give the paintings a sense of mystery and timelessness, suspending them somewhere between a dream and reality. Like an afterimage, they might evoke, as Barceló describes it, ‘a table from Pompeii […] or the frozen ashes of things.’

Among the objects and creatures on display can be found a number of highly symbolic elements reminiscent of the vanitas genre that became popular in the Renaissance as a warning against overindulgence. Empty shells, skulls and open books act as memento mori, reminding viewers of their own mortality. They are contrasted by the vegetal elements on the tables: bouquets of flowers and dried palm leaves, which symbolise life and rebirth. Across the works on view, the feast is populated with creatures that the artist fishes himself on the island where he lives and works. Eels and octopi, shrimp and lobsters – they connect the scene to nature, suggesting a comment on the precarity of plenitude and on the value of a profound connection with the land.

At various points throughout the exhibition, improbable pairings of exotic creatures such as leopards and crocodiles, zebras and swordfish, replace the victuals on the table. ‘A combination as bizarre as the mixture of rum and coke,’ states Barceló, who has always resisted giving a definitive explanation for his use of animals as subjects throughout his work. Like fantastical heraldries carrying a multitude of mysterious associations, they complete the cornucopia, while at the same time challenging our assumption that the still life will depict inanimate objects. ‘It’s obvious that both elements are alive and well,’ says Barceló of the interlocking zebra and swordfish.

Barceló compares the act of painting to ‘breathing life’ into his canvases. Although less dense and layered than his previous work, this life infuses the delicate materiality of the grisaille paintings. As what he describes as the ‘dusty and sizzling’ charcoal mingles with vibrant pigment blown directly onto the canvas, elsewhere, gentle impasto accumulates like sea foam or lichen in the white underlay. Presence is balanced with absence, colour with monochrome, abundance with scarcity, life with death. Inviting viewers into this suspension, Barceló’s still lifes encourage us to engage with the renewal and decay at the heart of some of the most pressing questions of contemporary life.

The exhibition will be accompanied by a catalogue with an original essay by Alberto Manguel.

Grisaille à l’espadon (2022) from the artist’s new series of still lifes will be on view at the Louvre from 12 October 2022, as part of the unprecedented Les Choses exhibition dedicated to the genre.