Nicole Eisenman’s ‘Untitled (Show)’ celebrates the interplay between painting and sculpture in their restless, expansive practice. It is their first major solo exhibition at Hauser & Wirth New York, spanning two floors of the gallery’s building on West 22nd St. It is also their first show of new paintings in New York City since 2015. If ‘Untitled’ is a show about what Eisenman has been doing for two or three years, it is also a show – the clearest demonstration yet – of what they have been doing for three decades: building a world where life and form can finally have it out. 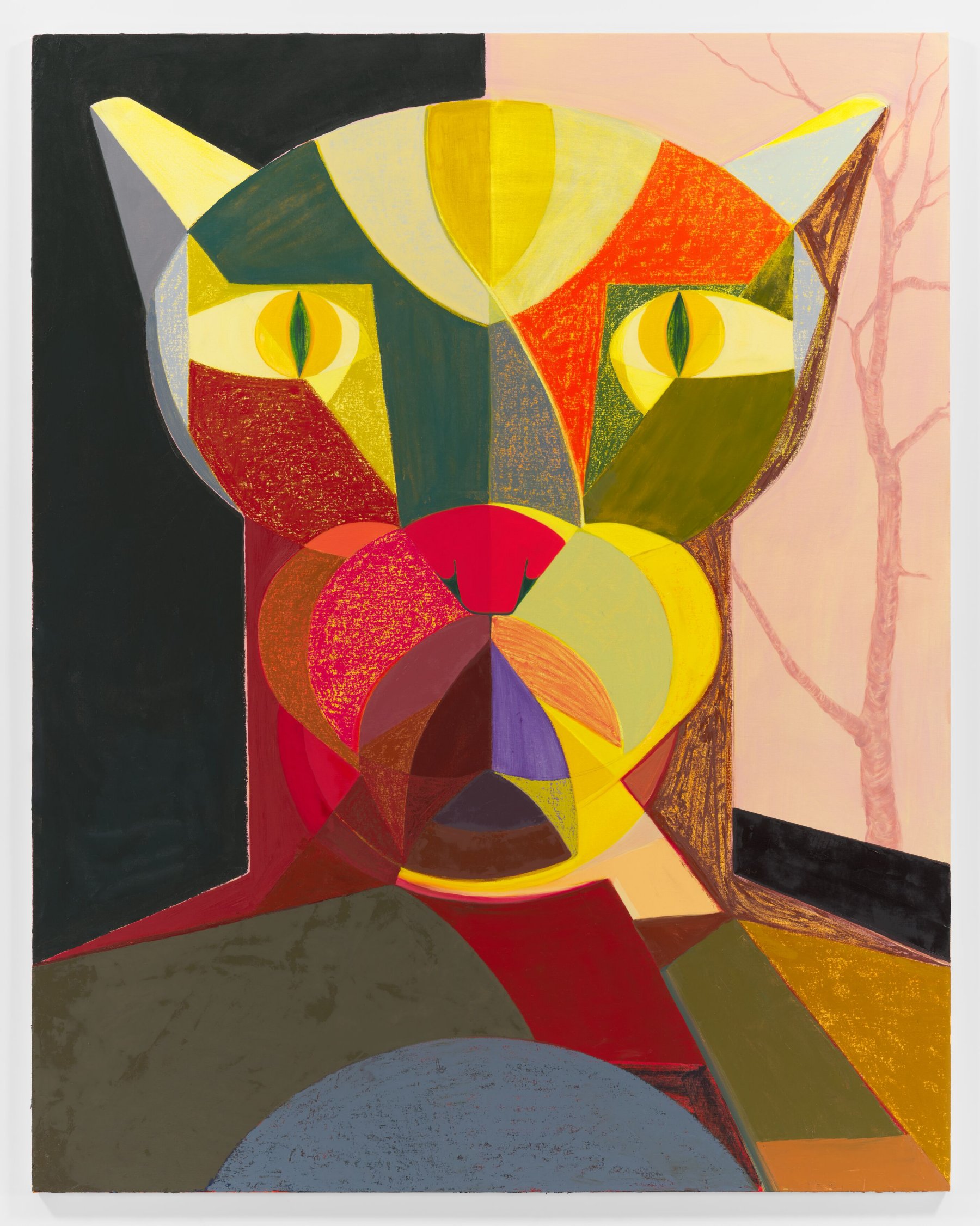 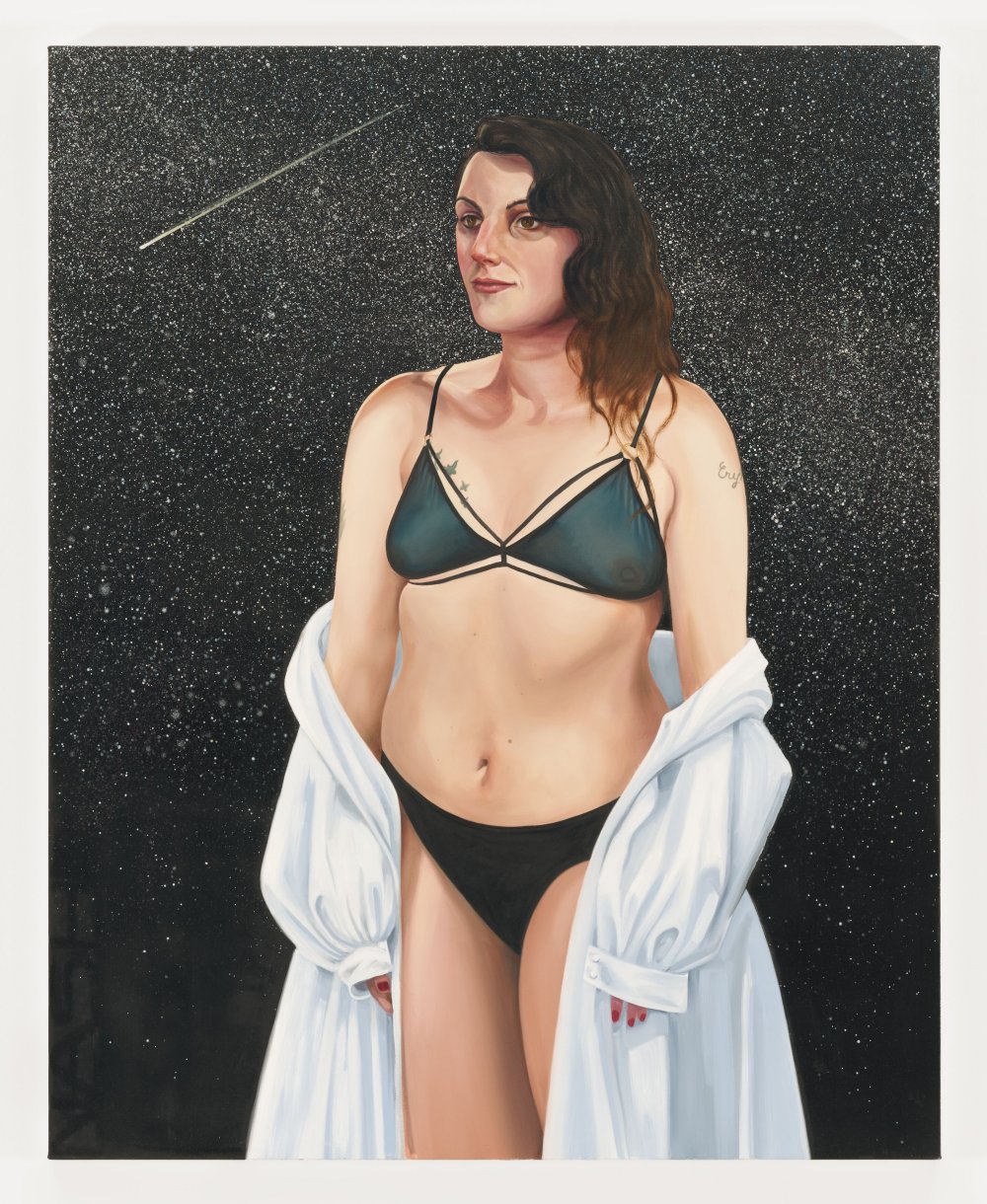 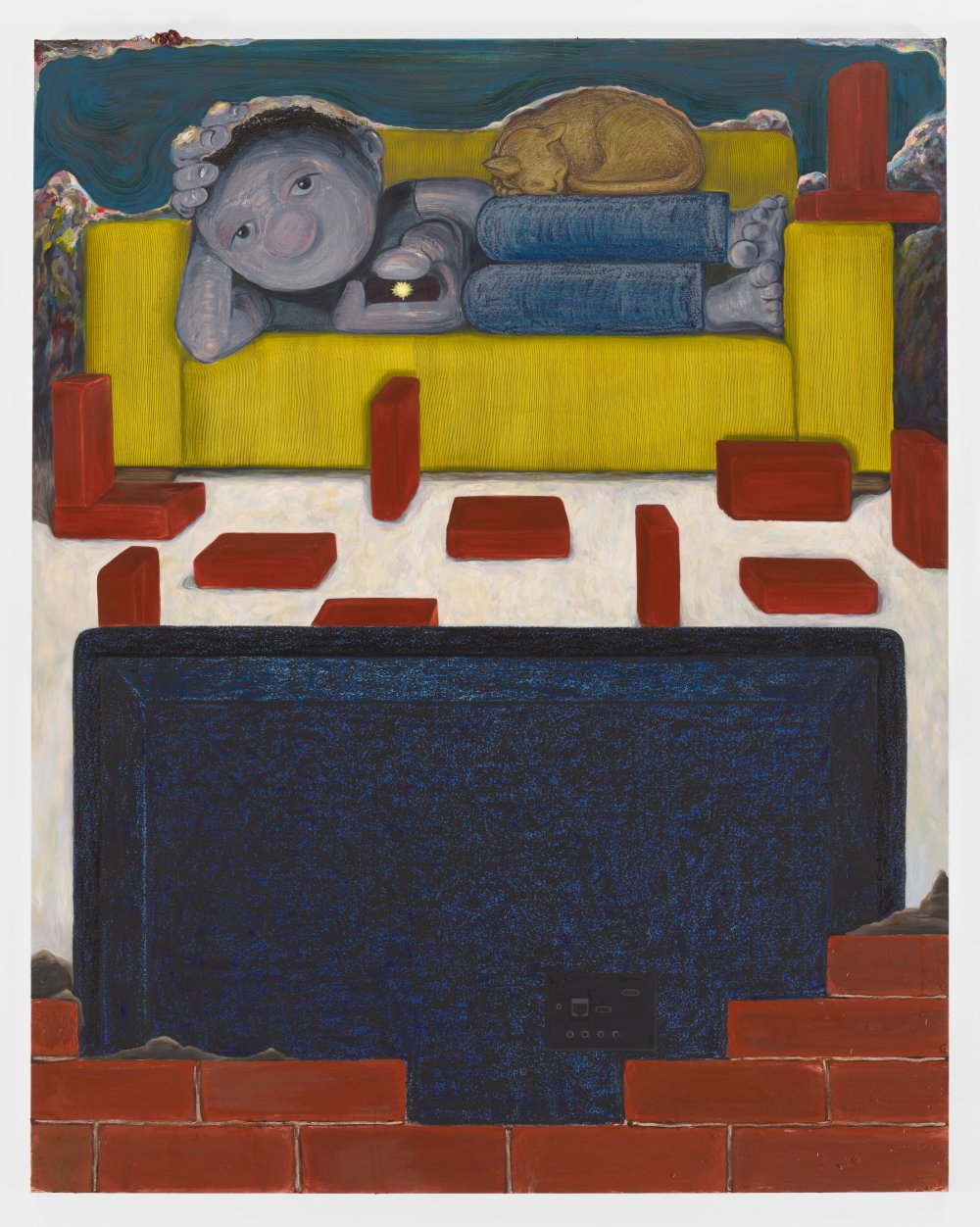 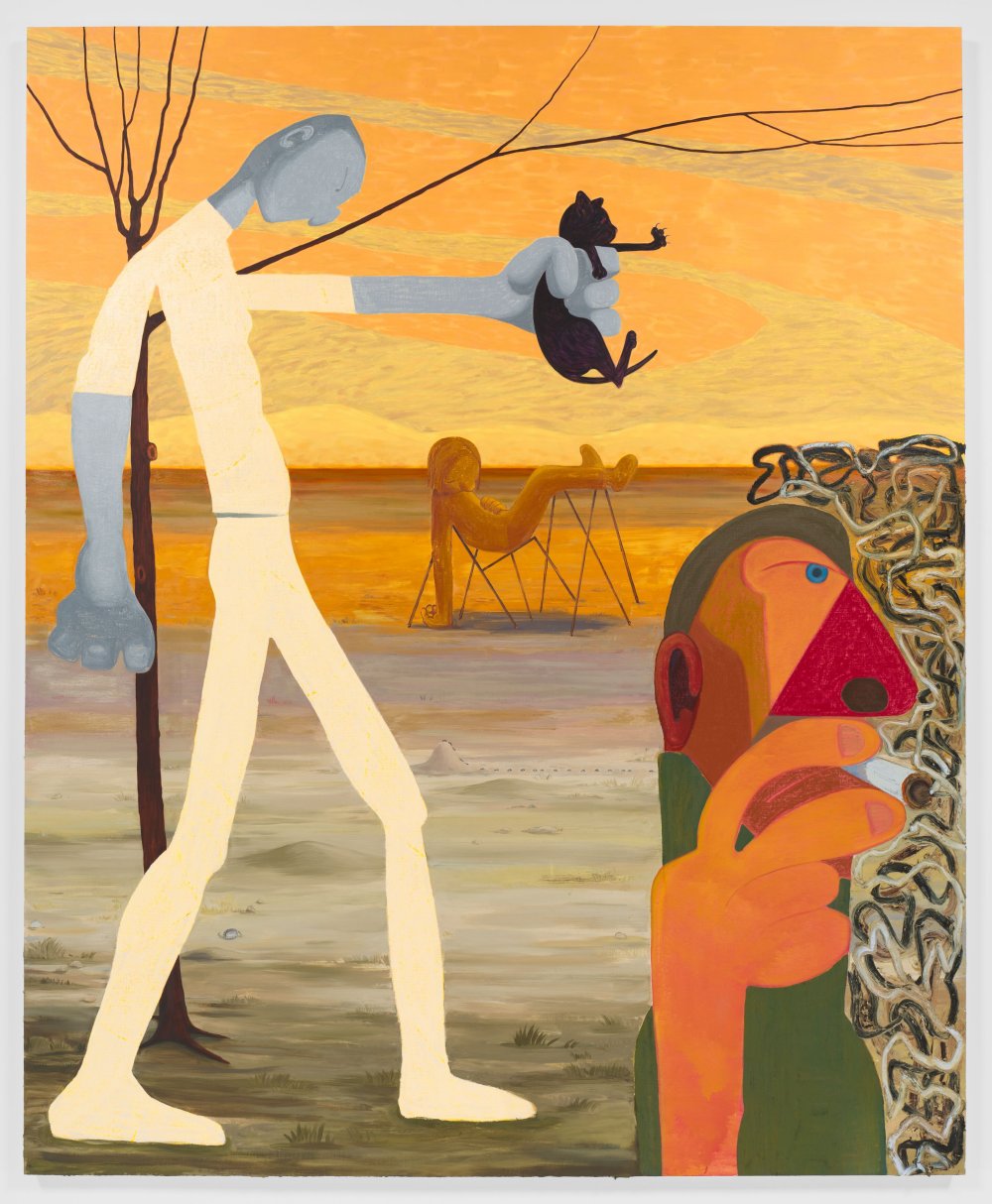 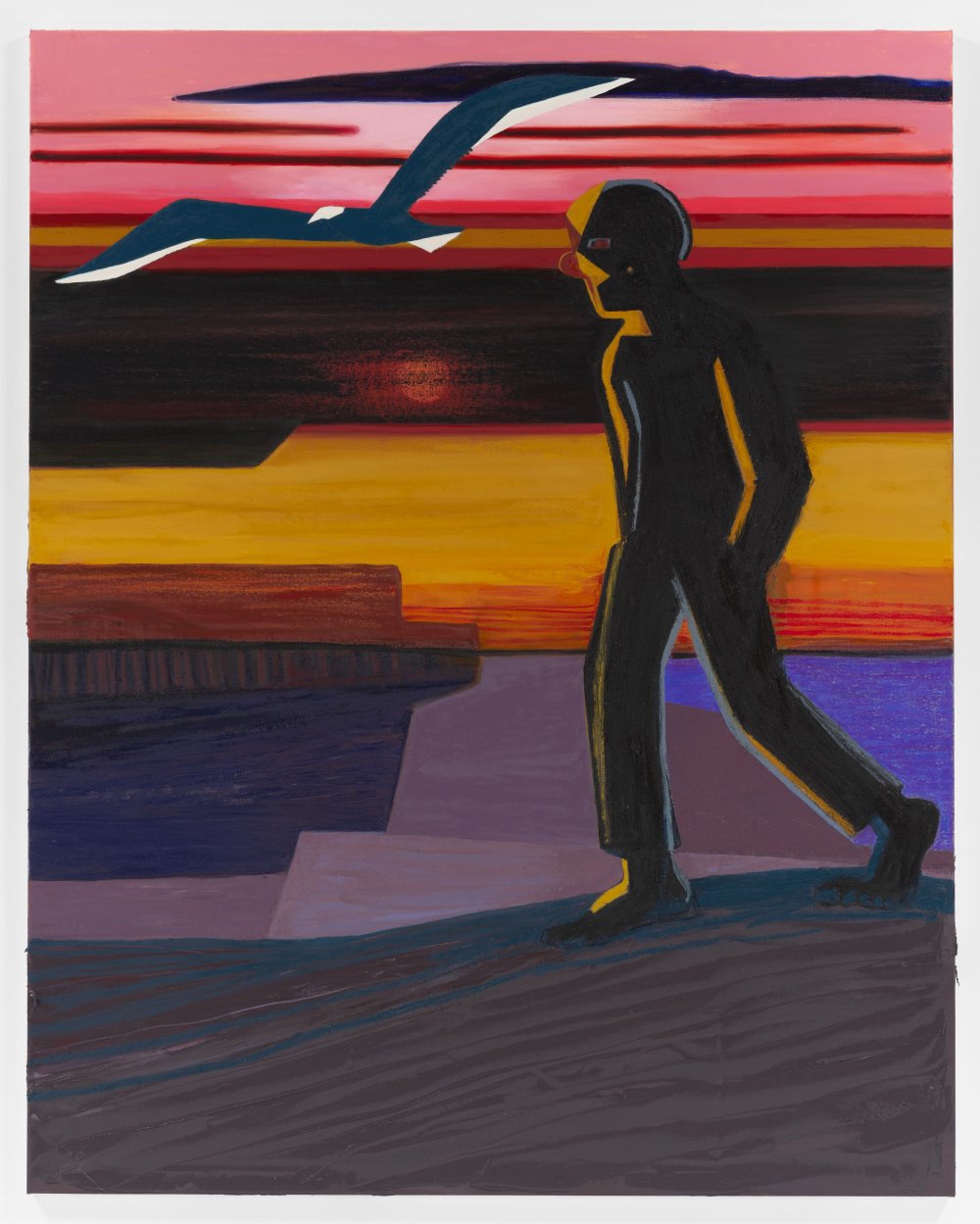 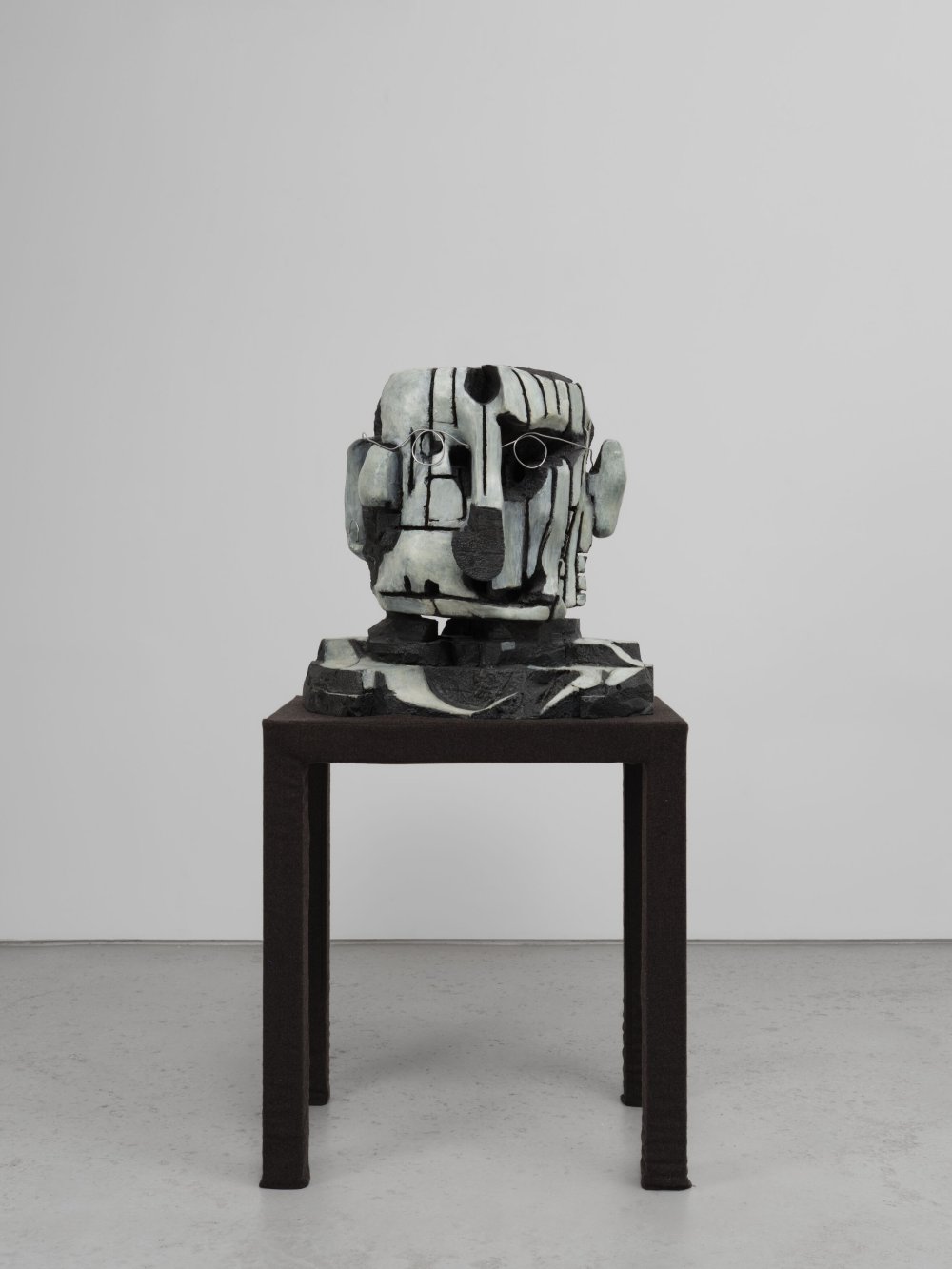 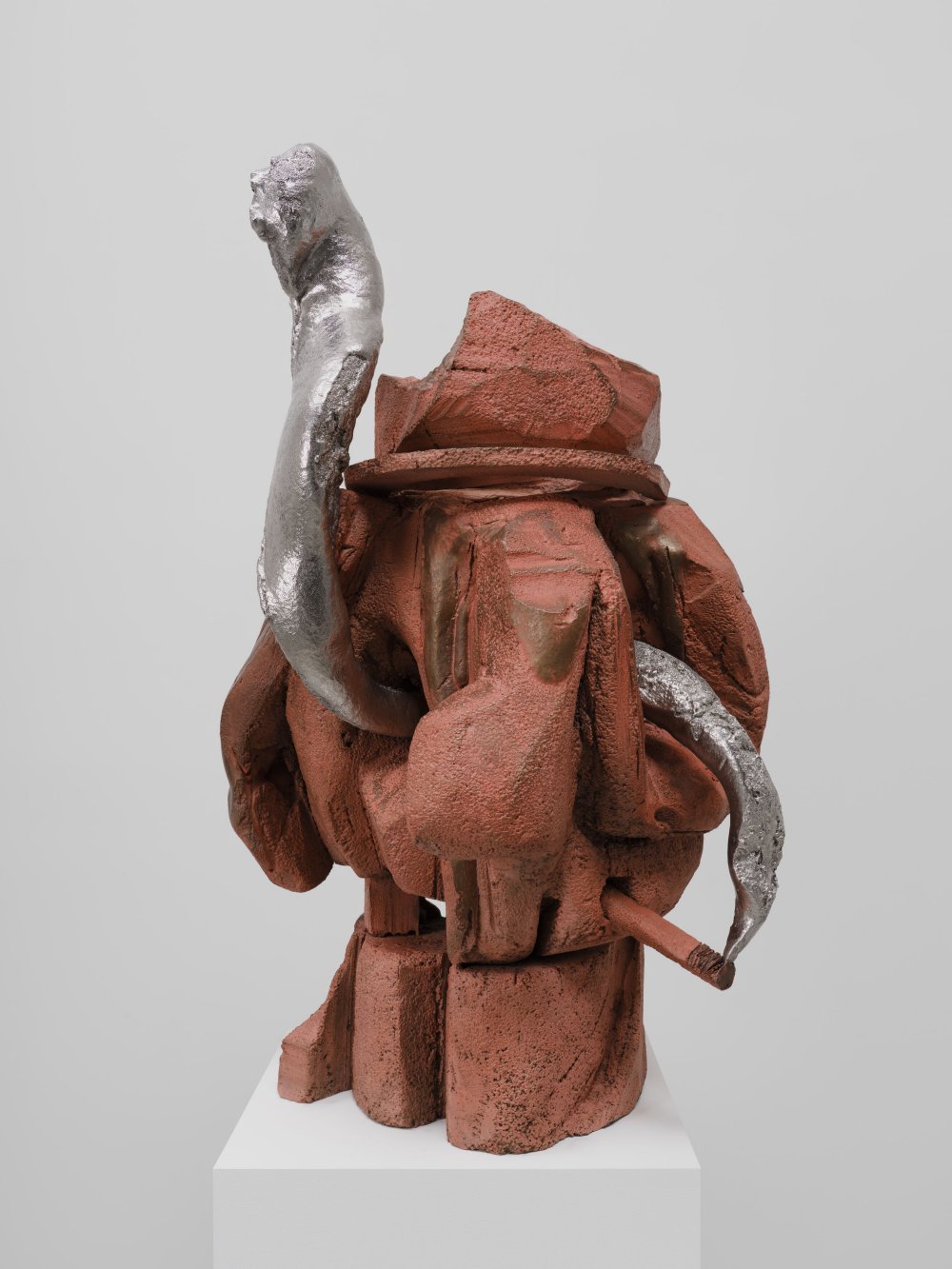 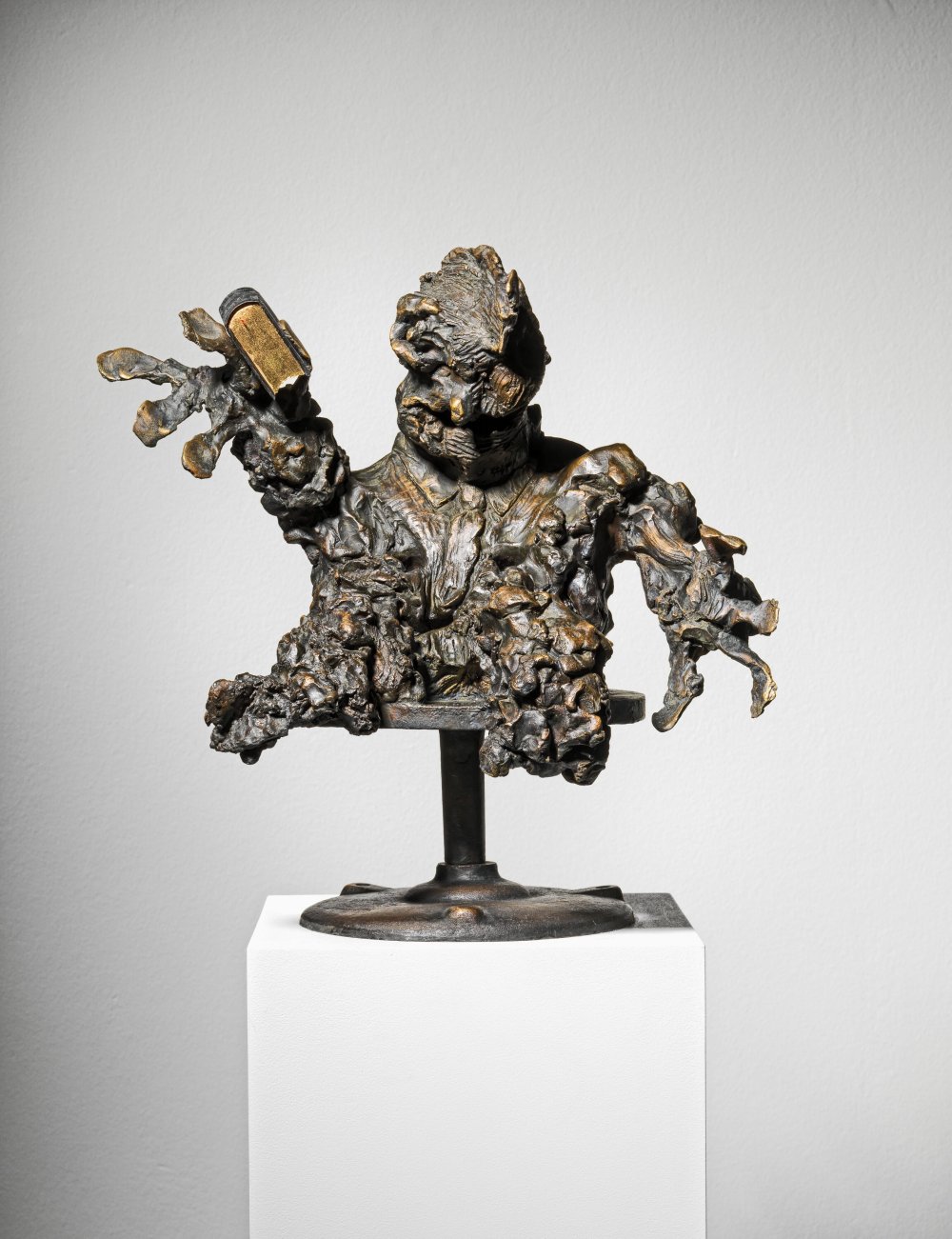 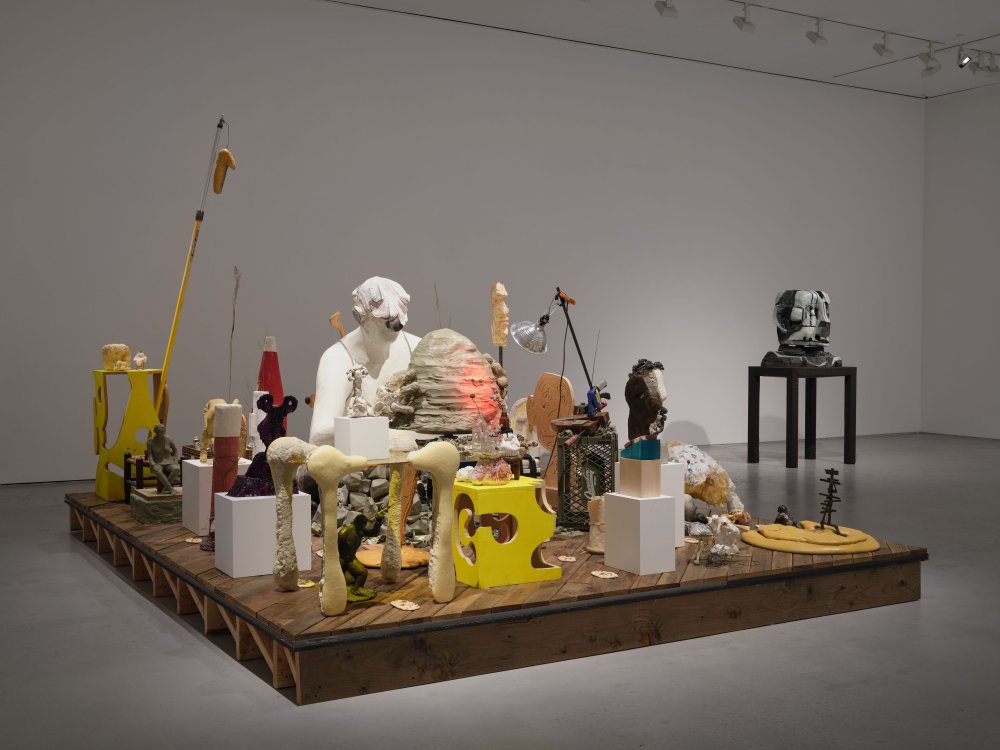 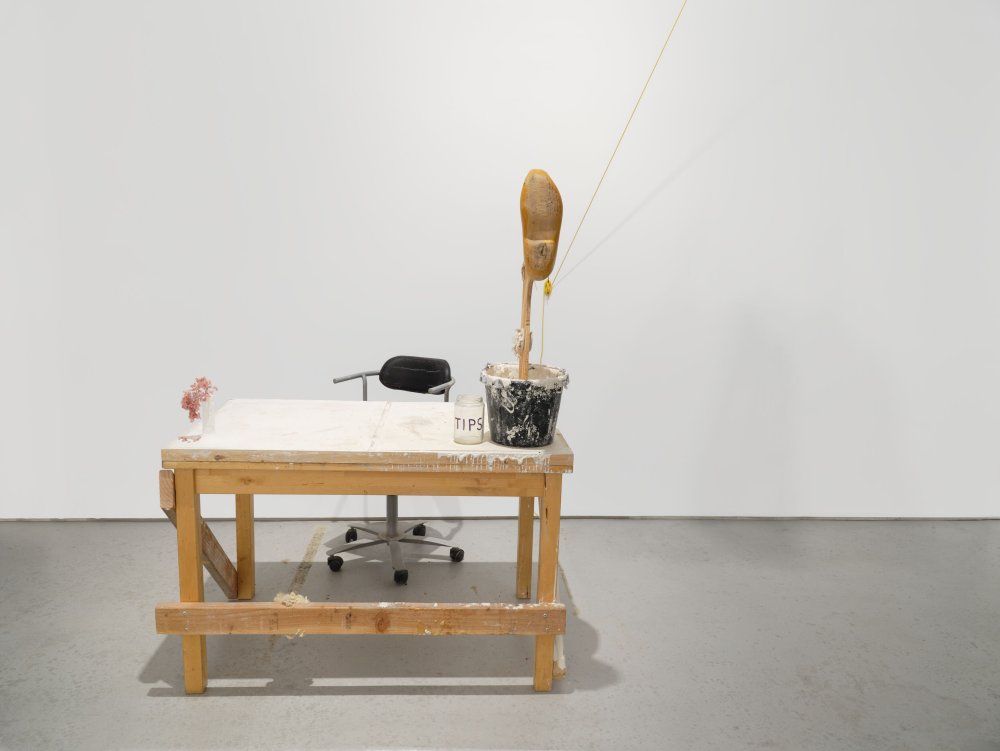 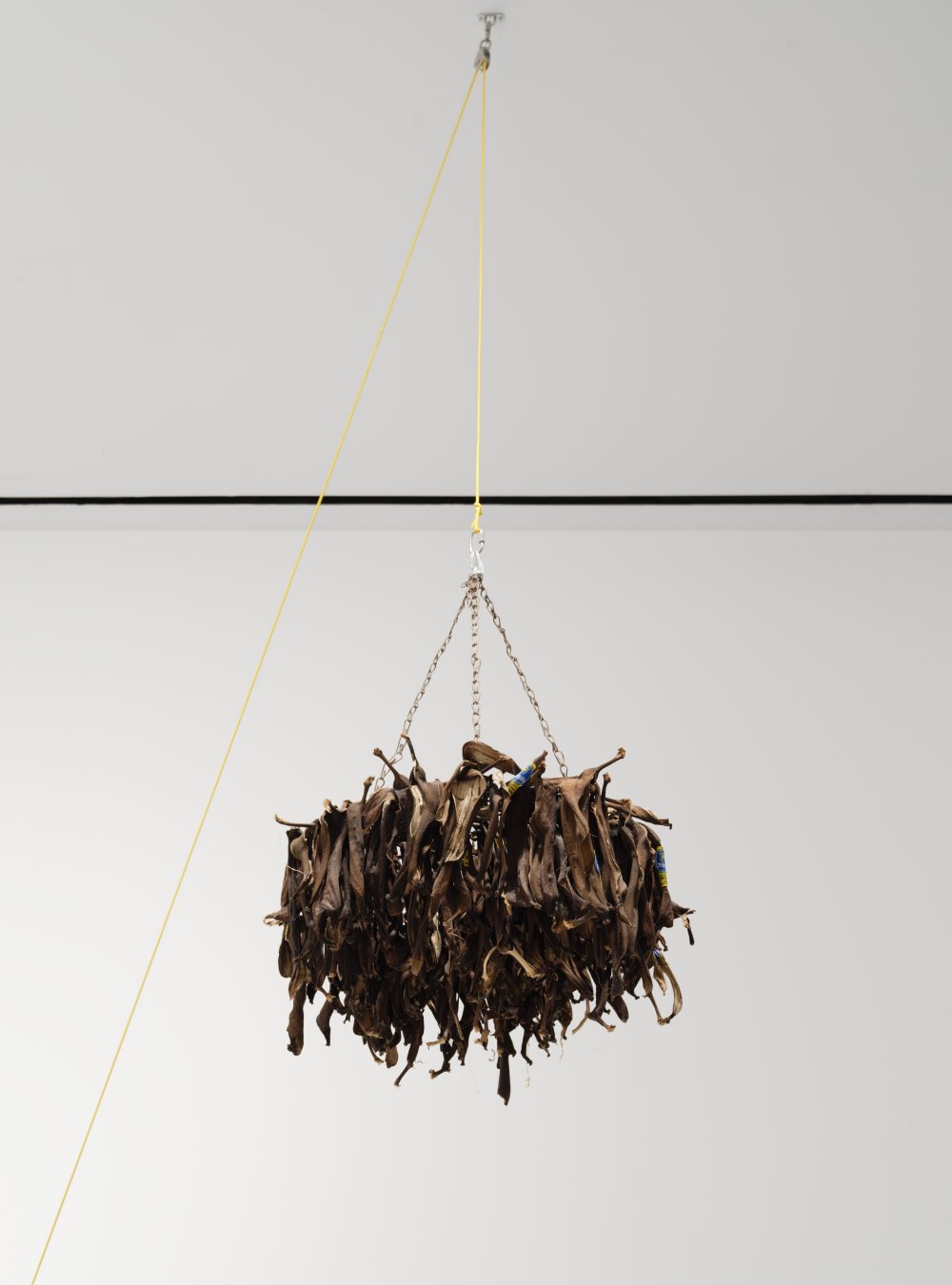 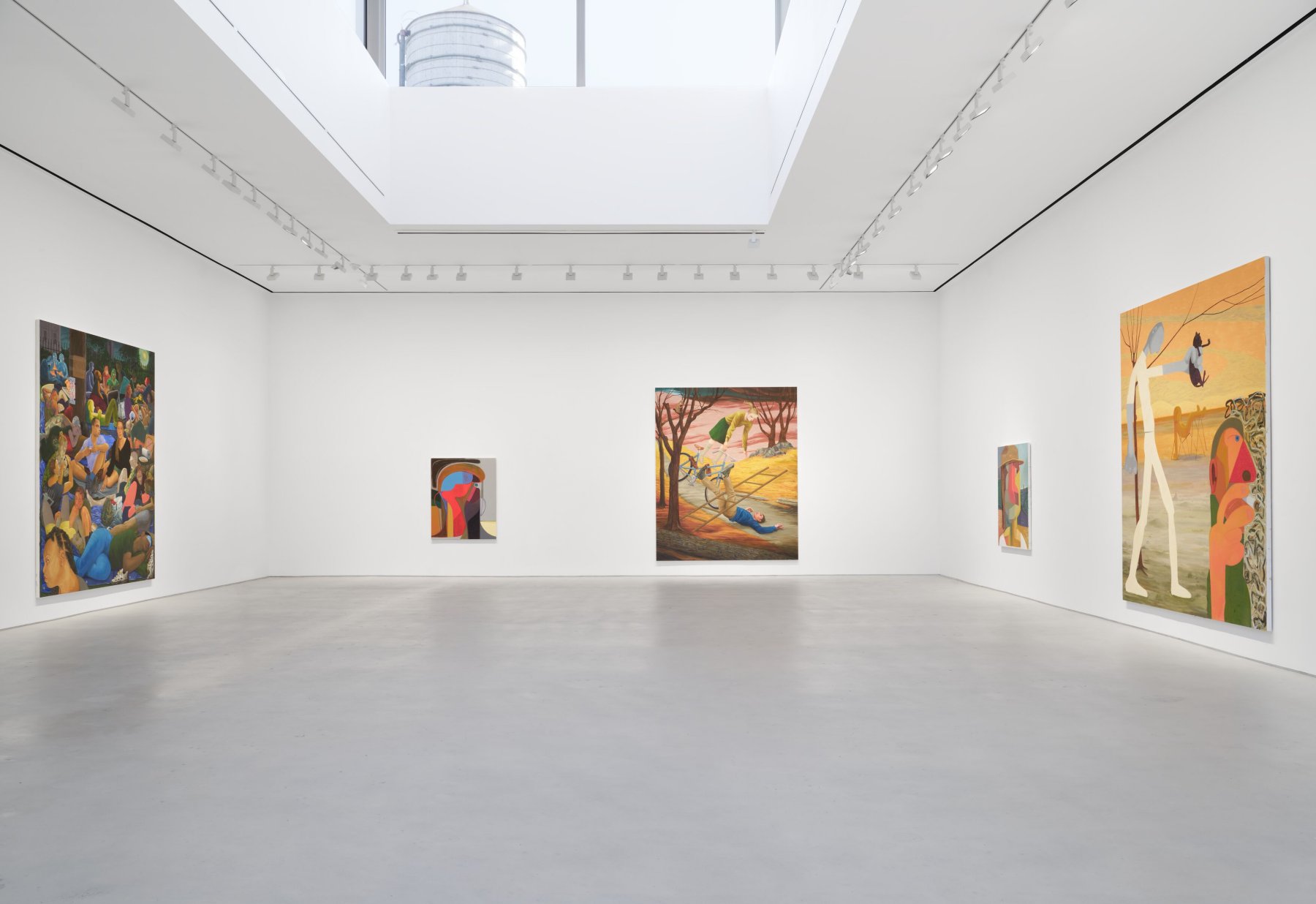 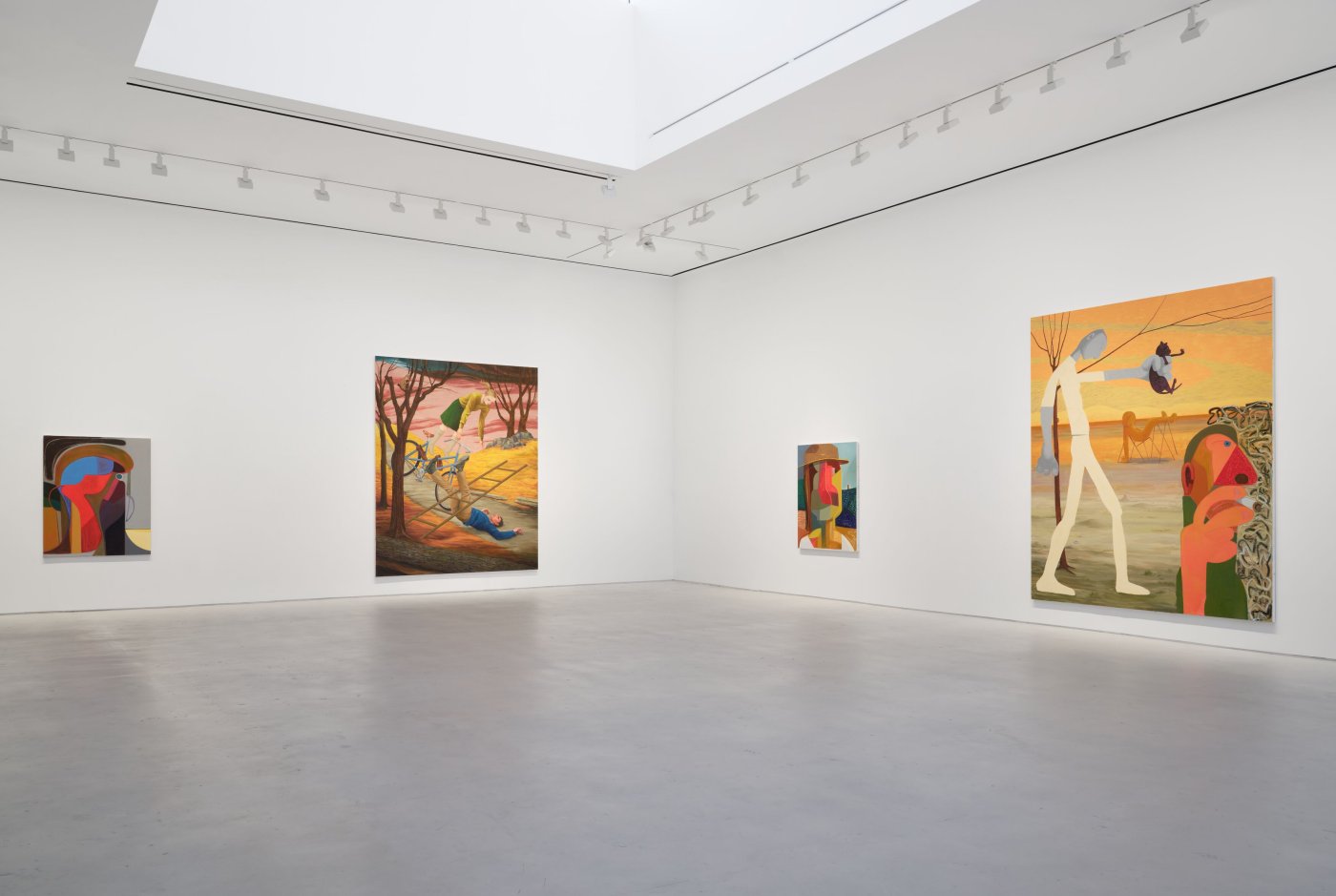 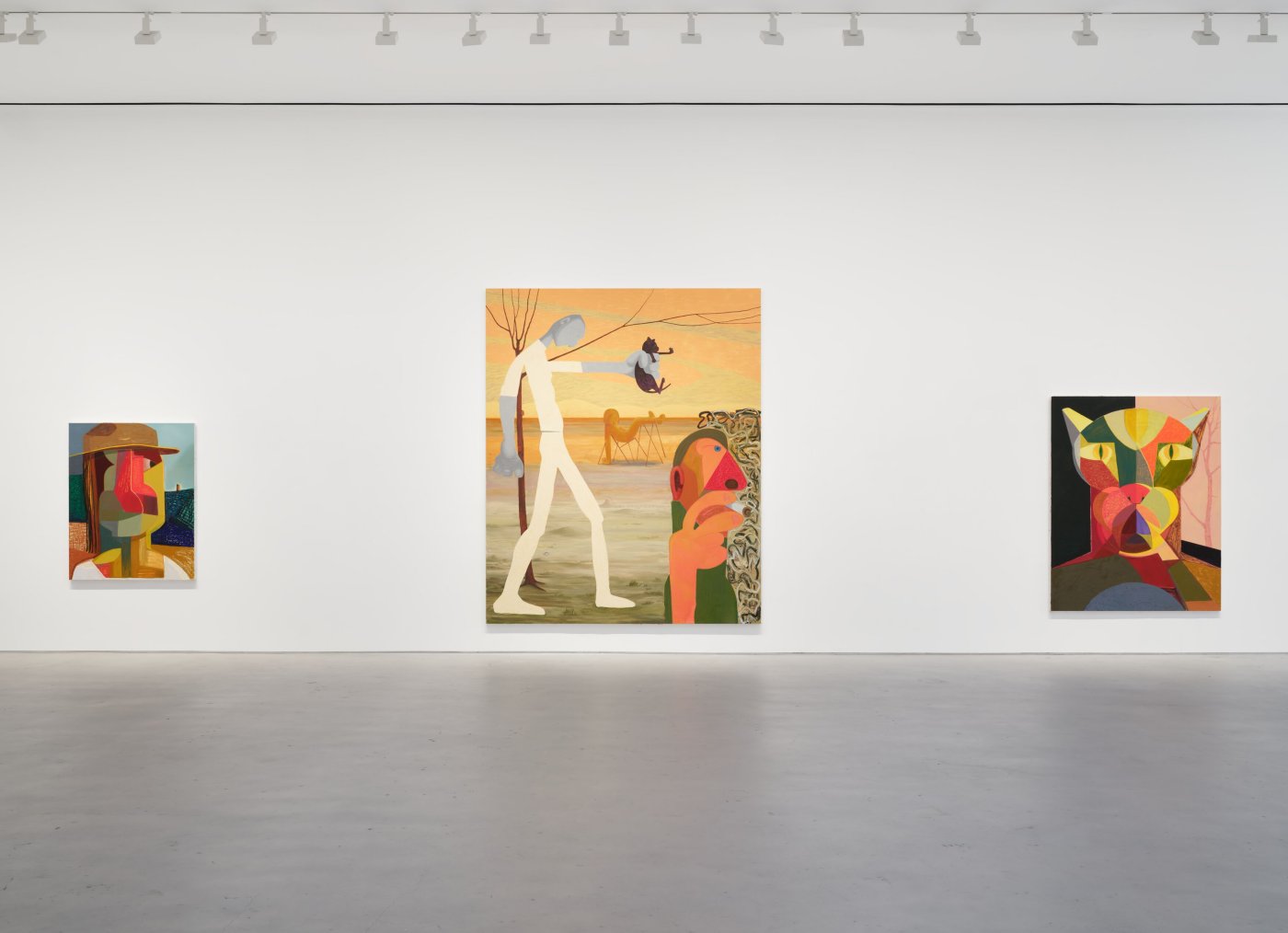 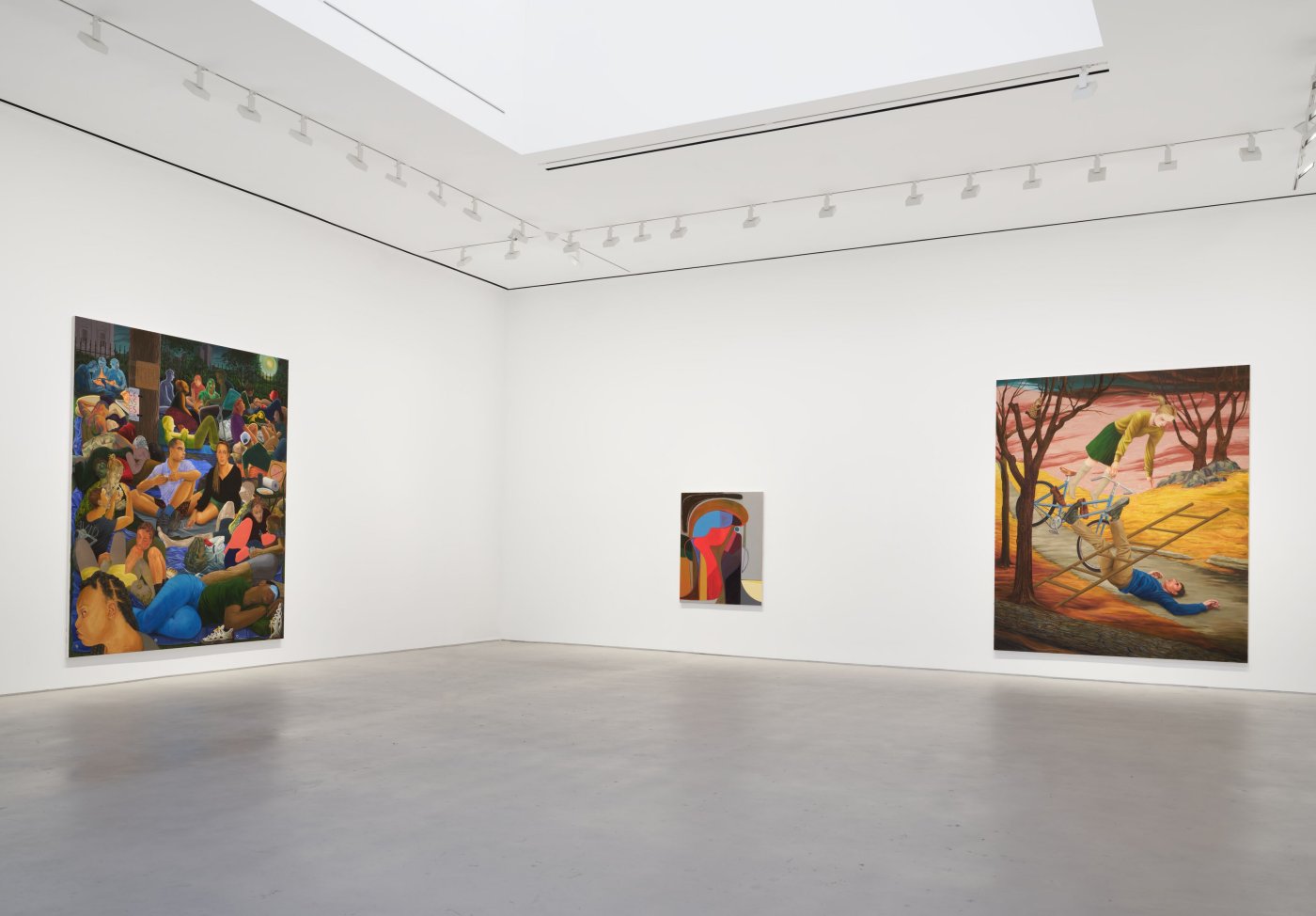 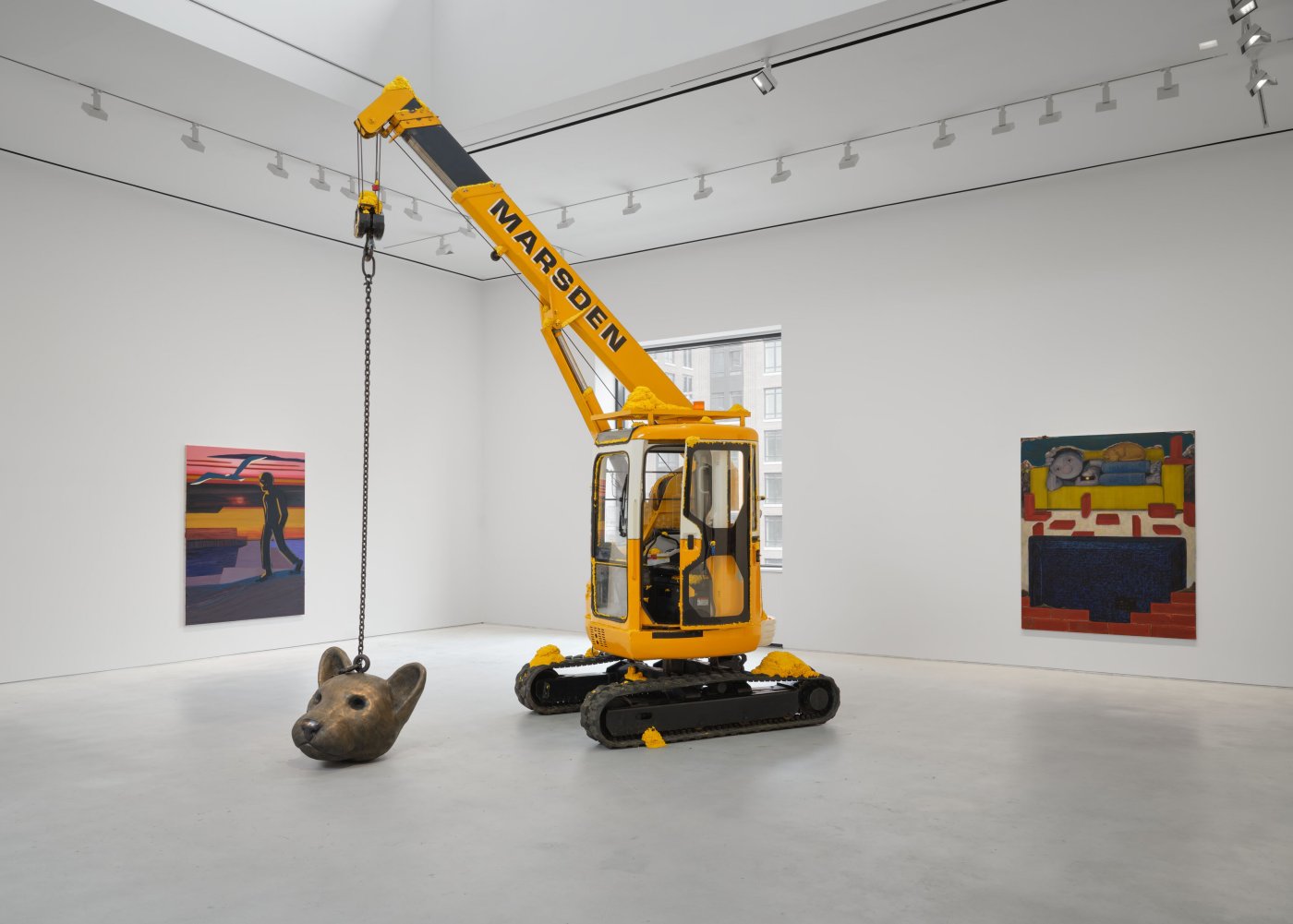 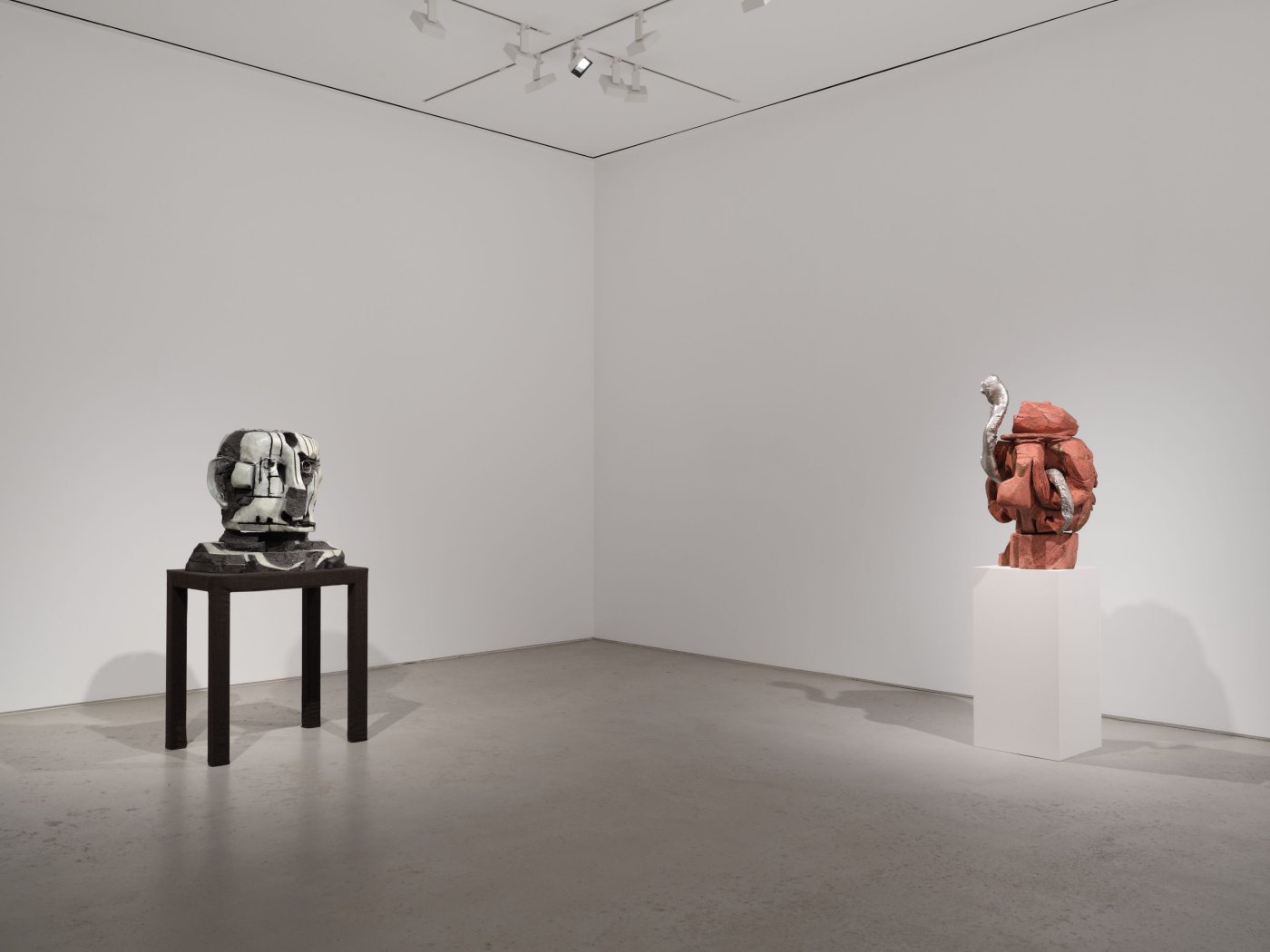 At the heart of the exhibition is ‘Maker’s Muck’ (2022), a representation of the creative process that is thoroughly evolutionary in spirit. An outsized plaster figure sits hunched over a potter’s wheel, on which a mound of ersatz clay interminably spins. The floor teems with sculptures. Some of the pieces are fully rendered and recognizable: owl, kouros, ketchup bottle. Others are either unfinished or beyond done, i.e. abstracted. A few are still little lumps. (Evolution is not in fact linear.) Superficially, the installation recalls Eisenman’s 2004 painting ‘The Work of Labor and Care,’ in which two people dressed like actuaries assiduously mold and shape what looks like a pile of shit. In Eisenman’s studio the role of these actuaries is done by Sam Roeck and Suzanne Wright. Spiritually, it’s more like the ‘drawing clinic’ Eisenman installed at the Kunsthalle Zurich in 2008. There, they devoted a room of the museum to failed, unfinished, or otherwise unframeable works on paper, some of which were reworked by local artists at Eisenman’s behest. Here too, they toy with the myth of the monomaniacal genius. The plaster figure is modelled not on Eisenman themself but on their friend and former assistant, the painter and sculptor Benny Merris.

Eisenman’s most noted collaboration is the one they have with the viewer, who is tasked with finishing their stories in her head. ‘Tail End’ (2021), a painting made as a counterpart (or prequel) to 2018’s ‘The Darkward Trail,’ stars a trio of disparate figures on a desert quest. One serves as lookout, albeit with a smoke-clouded view. Another blindly brandishes a cat as a weapon. Do they know their enemy? Maybe it’s anomie. ‘The Abolitionists in the Park’ (2020-21) limns a bigger world than the known one, with more figures engendering more, not less, space for each other; the painting seems to warp and exceed its frame. Centered in this scene of social surrealism are the writers Hannah Black and Tobi Haslett, looking like models in a poster for the Soviet Union. Black’s eyes are fixed on the horizon. What she sees, we can’t. In ‘Destiny Riding Her Bike’ (2020), a figural motif that the scholar Terry Castle calls the ‘Eisenman Weird Twosome’ – an improbable, funny-looking dyad, usually marked by one figure’s eerie indifference to the other’s difference – appears lovingly recapitulated as an embrace of fate. Yet the meet-cute doubles as a record-scratch moment, in which mutual recognition is a sign it’s too late to save yourself. More romantic by half is a portrait of the painter Nash Glynn, who commands a picture plane that is literally stratospheric – starry – and looks through it, not at the viewer but at the unseen, other painter.

Constructivist rigor marks out the newest paintings in the show. A lone figure – perhaps no figure in Eisenman’s oeuvre has been as lone – in ‘The Ledge’ (2022) looks less like a body than like a walking (not talking) stick. The black box that makes up the whole of the foreground in ‘Reality Show’ (2022) is what some people call a television; it is also what B.F. Skinner called the human mind. Synecdoche serves this artist well: ‘When you can’t think of what to draw,’ they’ve said, ‘draw a head.’ Meaning: the head stands in for the thought. Or vice versa? Eisenman’s heads are getting bigger.

Naturally, the biggest head is home to the smallest brain. Edie, who is Eisenman’s two-year-old cat, appears severally throughout the show, getting beastlier with each incarnation: first as a kitten whose curiosity causes a hero to collide with his Destiny; later as a symbol – who knows? – of figuration’s ninth life. In her final form (‘Crazy Cat’, (2022)), Edie is all head and no body, molded out of clay and cast in bronze, weighing nearly 400 pounds: a wrecking ball lying in wait. She is leashed to a real crane (brand name: MARSDEN) that becomes more figmental with the last-minute application of paper pulp, which, like clay, is a material Eisenman cherishes because it is painterly and sculptural in equal measure, and because it is wet.