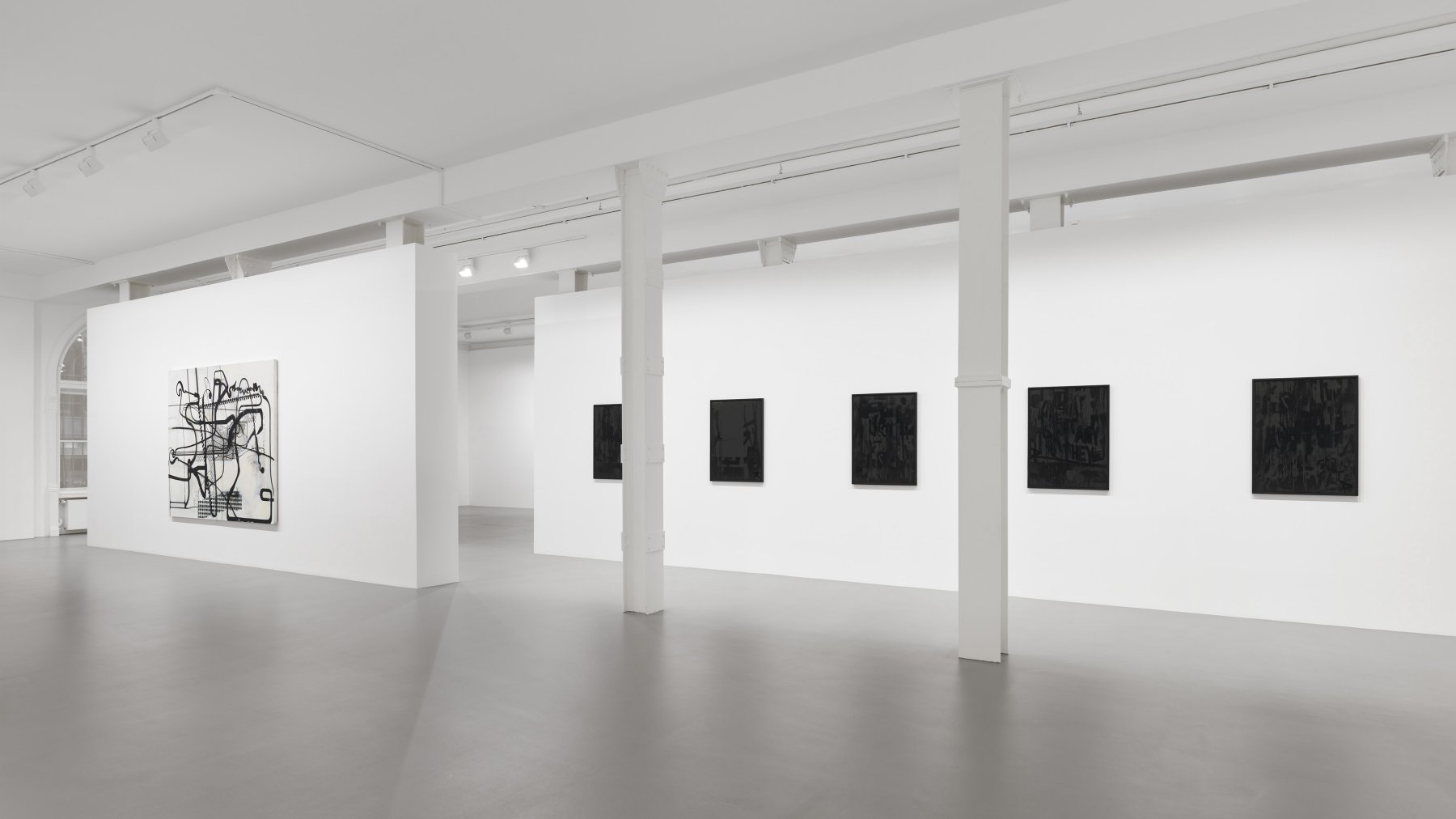 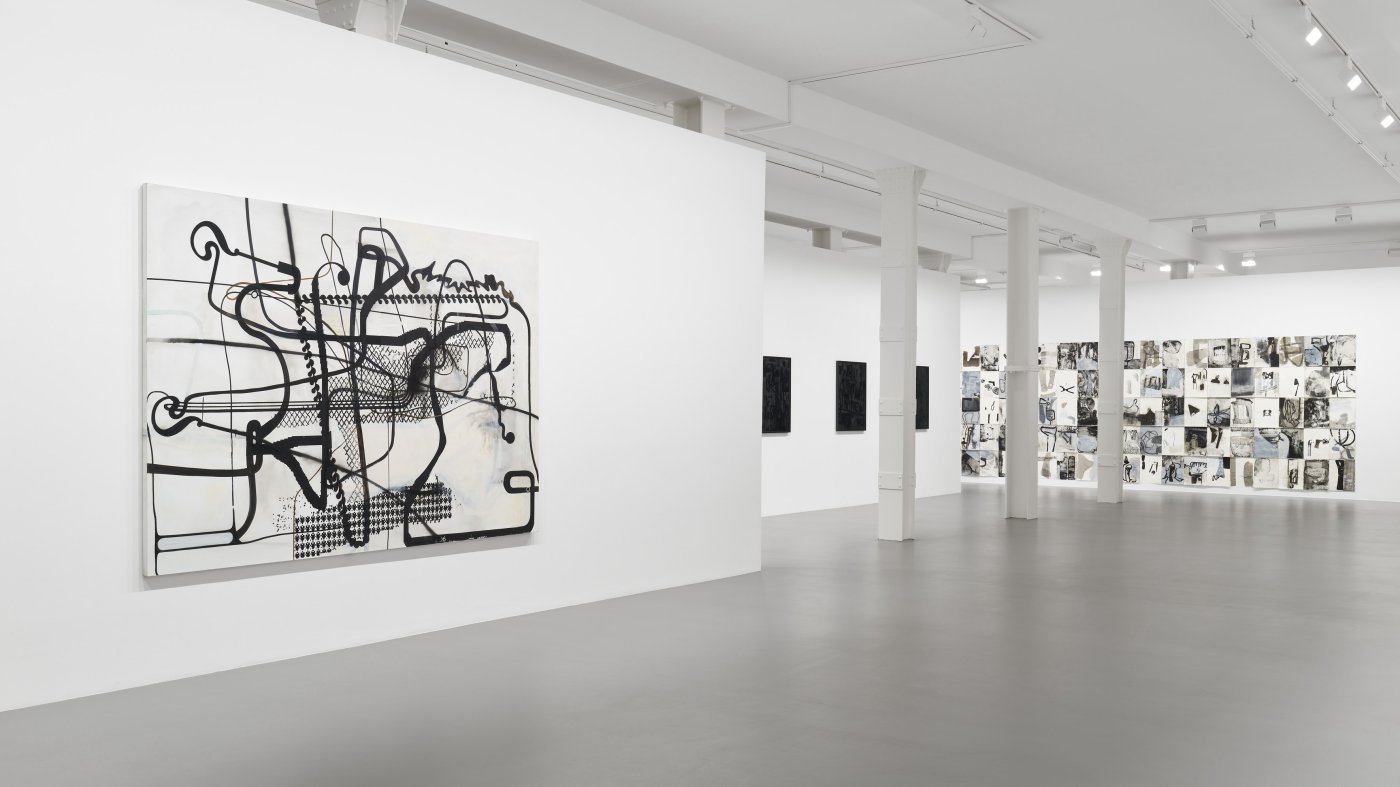 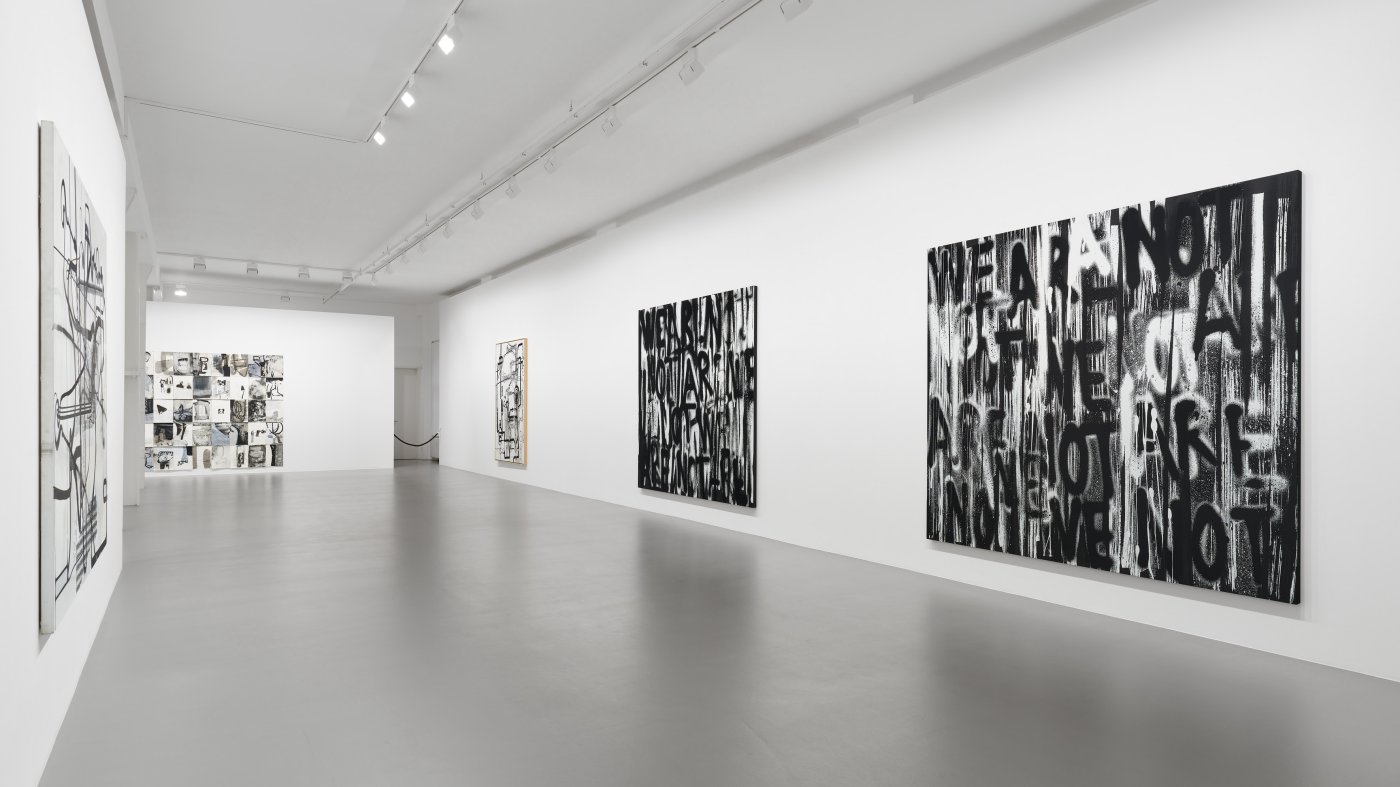 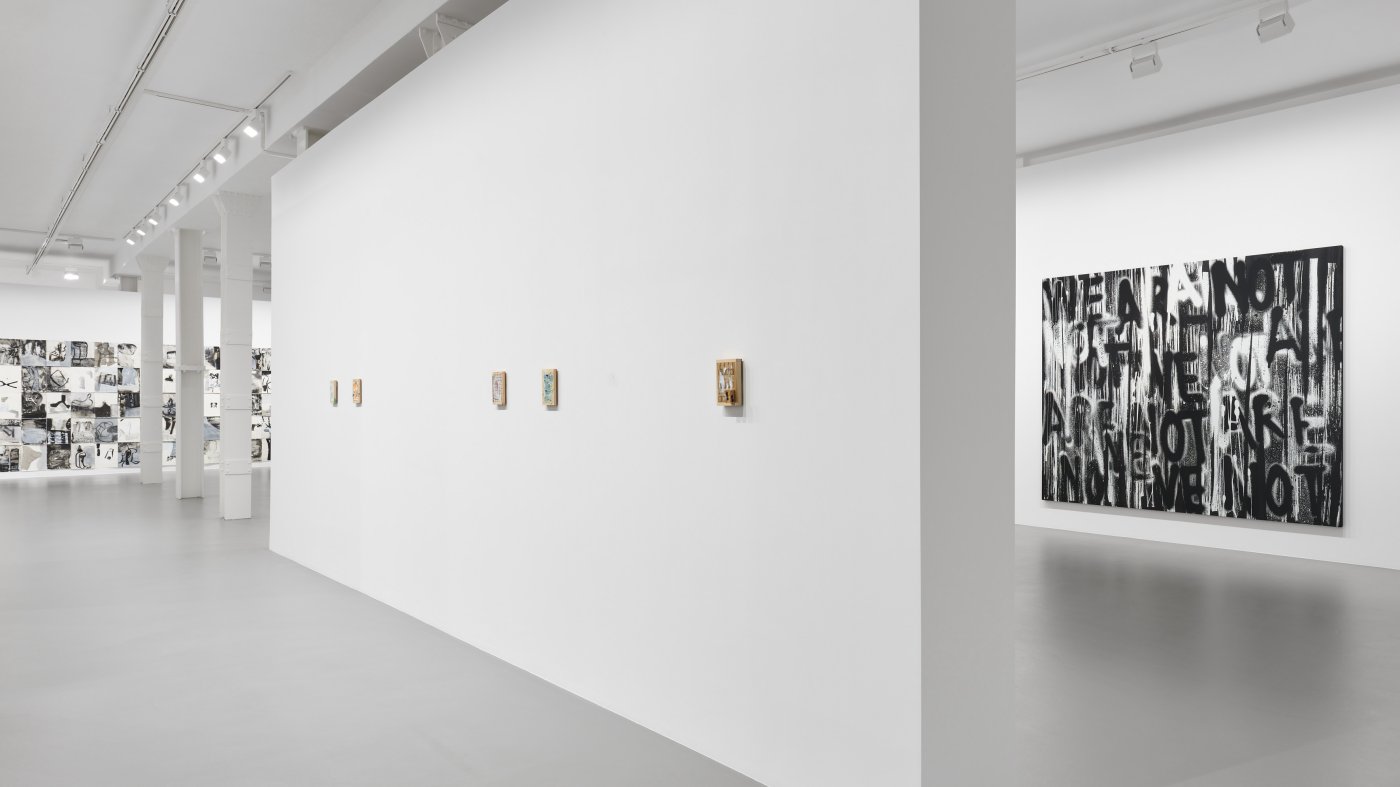 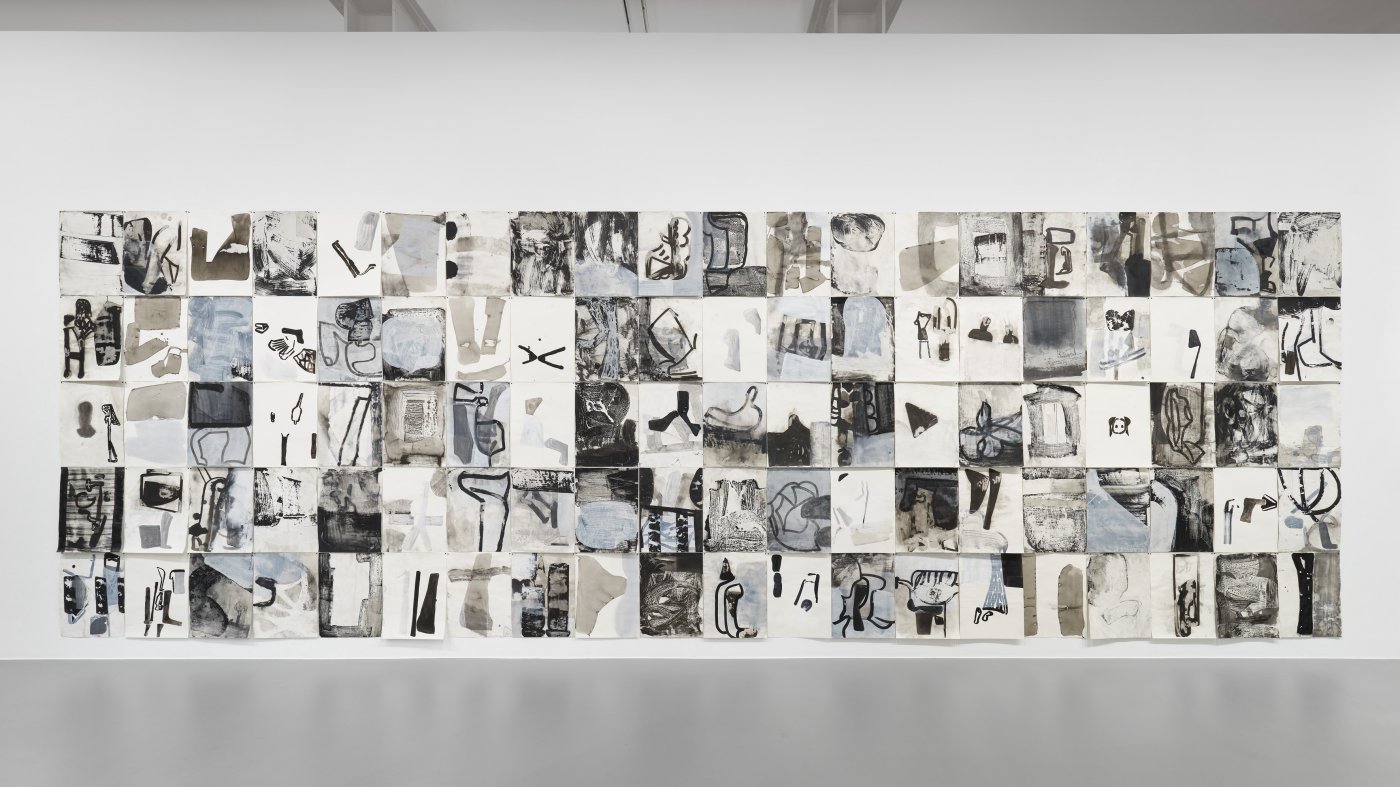 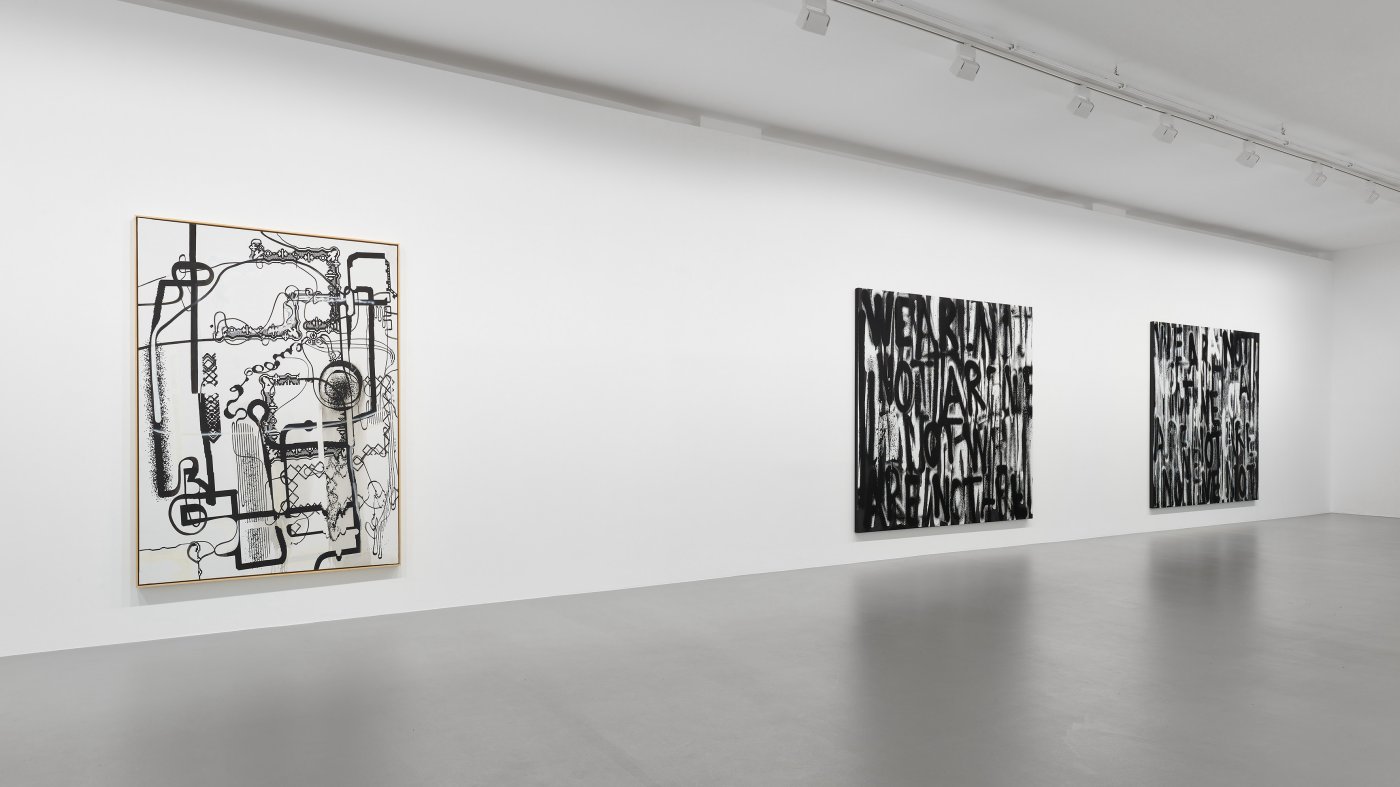 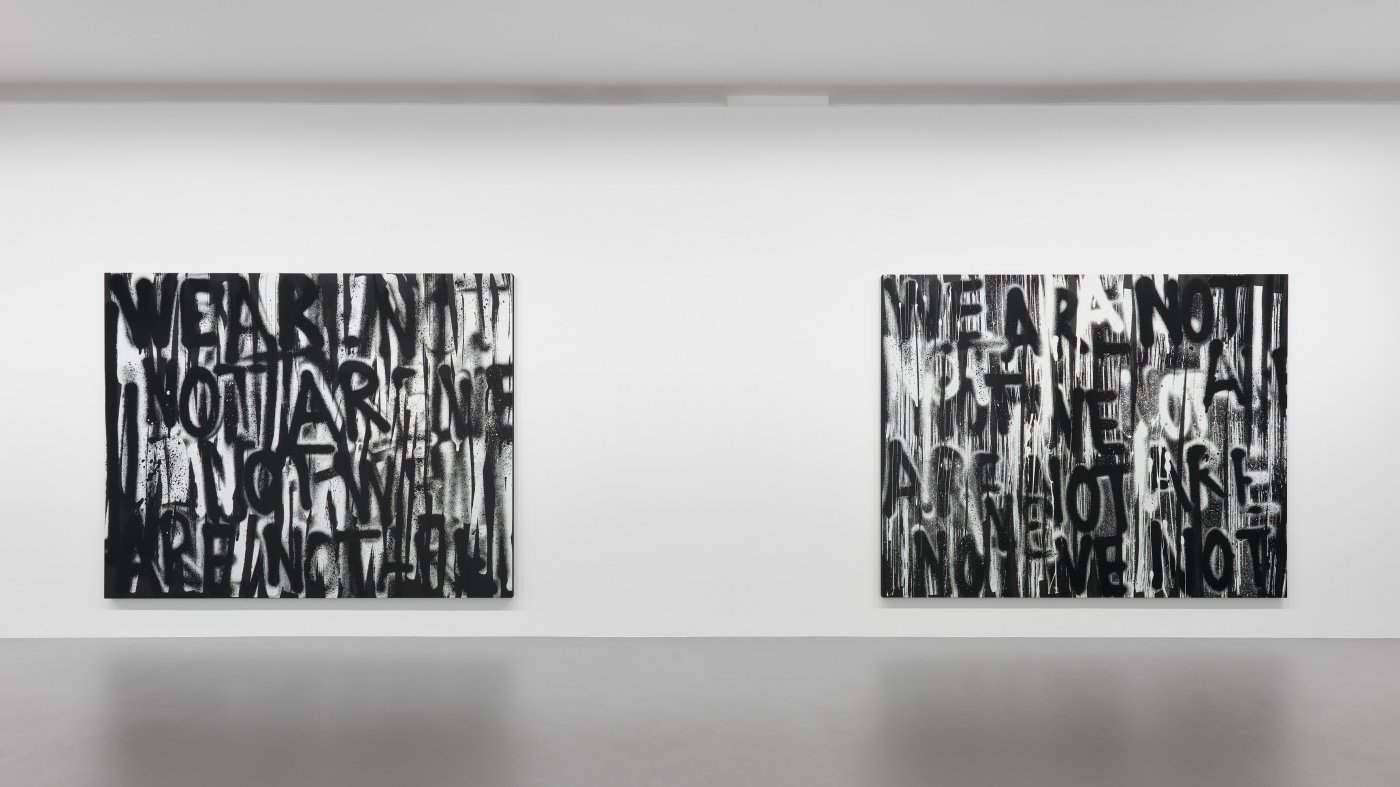 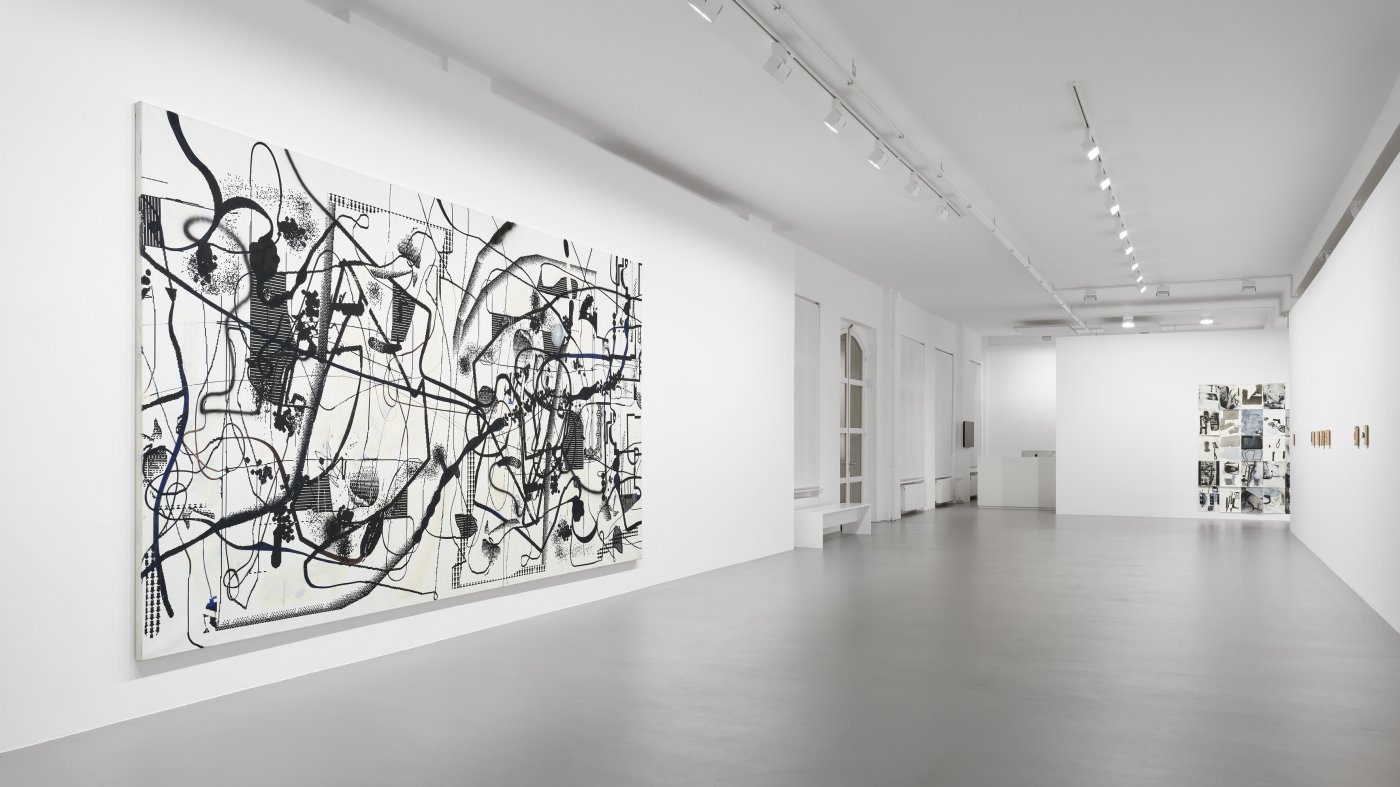 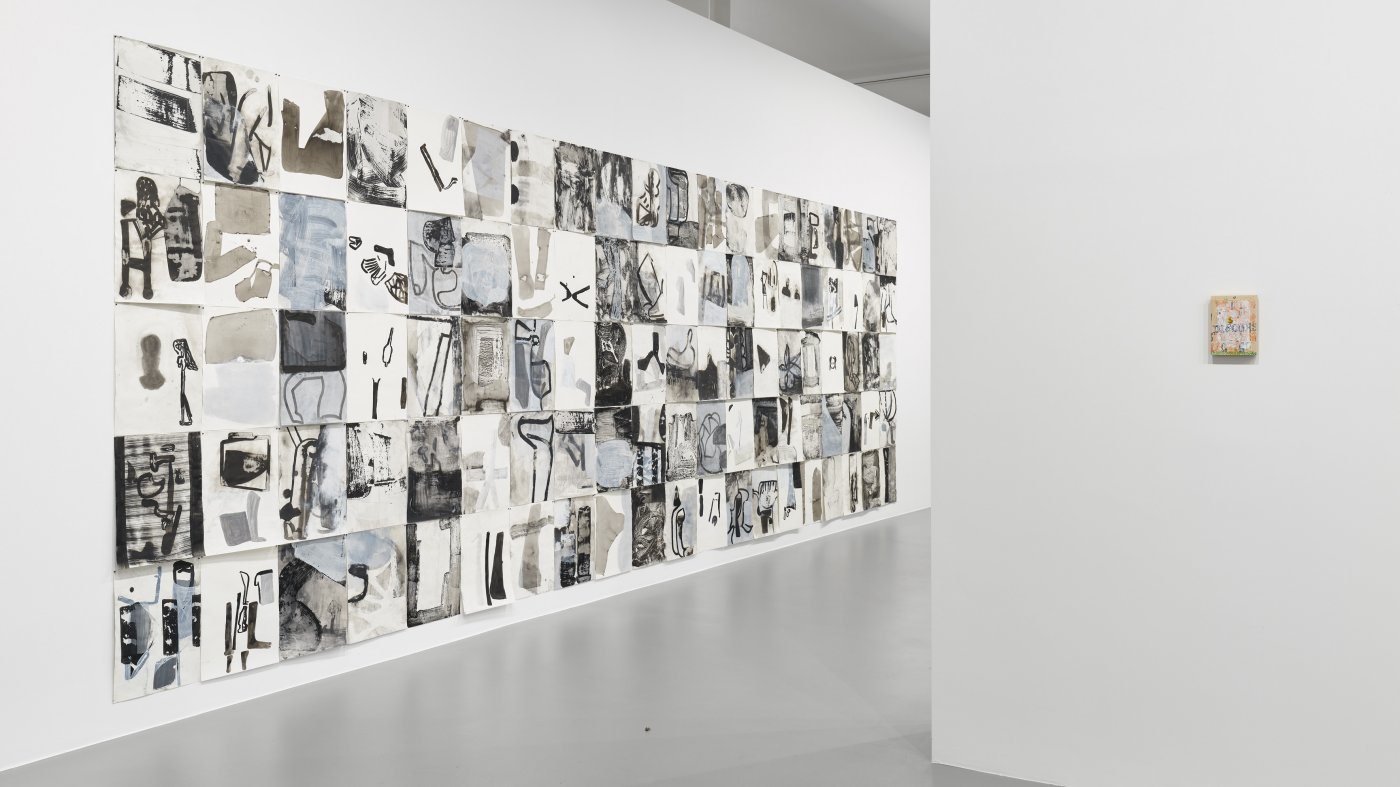 Oehlen, Pendleton, Pope.L, Sillman seeks to draw forth specificities and divergences from within a selection of paintings and drawings by four artists. These are works with an affinity for complications of painterly gesture and dynamics of generative feedback. In each case, the work is not primarily an index of the hand, but a space in which handiwork is swept up by a process, a performance, a technology, or some other unfolding that exceeds it. Albert Oehlen’s software presets and computer/paint mimesis; Adam Pendleton’s redoubled brushwork, spray-painted language, and typographic fragments; Pope.L’s intimately scaled nonrepresentational bastards on eraser; Amy Sillman’s grid of non-figurative animation components: all are works in flux, in states of continuous making and remaking.

While all announce themselves, to some extent, as paintings or drawings, all simultaneously involve themselves in the “non-painterly” by serialising the gesture, multiplying it, dispersing it, bringing it in and out of phase. But it is not a matter of similar or synchronised processes. On the contrary, the works evince disparate positions and intentions concerning the transformation and translation of sources, the functions of writing and overwriting, and the critical role of abstraction. By bringing these works together, the exhibition aims to autonomise them.

Over the course of more than four decades Albert Oehlen (*1954, Krefeld) has questioned the methods and means of painting, raising a sense of awareness of the medium which he aims to reinvent and to reshape, always in opposition to traditional hierarchies. Through his various styles, orders and mediums, Oehlen has been expanding the notion of painting to “what he wants to see”. From inkjet printers to computer-aided design programs and references to the pixelated lines of computer screens, Oehlen has incorporated new technologies into his work, all the while altering the parameters which he set for himself by imposing obstacles and challenges. In this way, he attests to the infinite combinations of form made possible through painting, and shows that these combinations can be manipulated at the artist’s will to produce novel perceptual challenges for the viewer.

Adam Pendleton (*1984, Richmond, VA) is a New York-based artist. In his paintings, drawings, and other works, Pendleton uses letters, words, drips, splatters, sprays, and collected images as primary materials. His work is a kind of continuous writing, in which language and gestural marks are incessantly recorded, transposed, and overwritten. Blurring the edges between modes of viewing and reading, between representation and abstraction, and between painting, drawing, and photography, Pendleton’s work is a visual philosophy of incomplete postulates. In 2008, he began to articulate his work through the idea of Black Dada, a visual project and ever-evolving inquiry into the relationships between blackness, abstraction, and the avant-garde.

William Pope.L (*1955, Newark, NJ) is known for his multidisciplinary practice, which encompasses performance, painting, writing, installation, video and sculpture to highlight binaries, contraries and preconceived notions embedded within contemporary culture. From the 1970s onwards, Pope.L enacted often arduous, provocative and absurdist performances and interventions in public spaces. His latest works are of intimate format and were made in response to Robert Ryman and his relationship with material, process and scale. Pope.L is interested in the tactility of material and his own interventions with it. About 12 standard sized Blick art erasers are assembled in a grid form and framed to become both the material and substrate of the work. The abstracted compositions of text, landscape and assemblage are completed by an elongated signing of Ryman’s name. Pope.L lives and works in Chicago, IL.

His first performances occurred on the street, and later at venues such as the Anthology Film Archives, Franklin Furnace, Just Above Midtown, Museum of Modern Art, New Museum, Performa, The Sculpture Center and the 2002 Whitney Biennial in New York; MIT and Mobius in Boston, MOCA Los Angeles, Shinjuku Station in Tokyo; Diverse Works in Houston; Cleveland Institute of Art in Ohio; Baltic Centre for Contemporary Art in Gateshead Quays, UK; Prospect 2 in New Orleans; Walker Art Center in Minneapolis; Museum of Contemporary Art Chicago; and CAM Houston among others.

Amy Sillman (*1955, Detroit, MI) considers drawing to be the point of departure for all her work. She does, however, explore more gestural modes of production in her inkjet-printed and silkscreened canvases, zines and also more recently in her animated iPhone videos, in which she brings her digitally drawn figures to life, as a reflection of her preferred media of painting and drawing and their respective boundaries. Her distinctive artistic practice operates at the juncture between the abstract and the figurative. Her large-scale, gestural oil paintings, as well as her finer drawings, are layered and complex reflections on themes such as physicality, language and interrelativity, often with a humorous and cartoonish effect. For the 2015 work shown here, Sillman created 100 paintings of bathtub drawings emphasising her idiosyncratic formal-pictorial approach.

Amy Sillman currently lives and works in New York. Since 2015, she has been professor of painting at the Städelschule in Frankfurt am Main. Sillman’s work has been the subject of numerous solo exhibitions at institutions including: The Arts Club of Chicago, Camden Arts Centre, London; Albright Knox Art Gallery, Buffalo, New York; Drawing Center, New York; Portikus, Frankfurt am Main, Germany; and Kunsthaus Bregenz, Austria. Beginning at the Institute of Contemporary Art, Boston in 2014, Sillman’s solo exhibition, “one lump or two,” travelled to the Aspen Art Museum in Colorado and the Center for Curatorial Studies at Bard College, New York. Her works are held in the public collections of such prominent institutions as Art Institute of Chicago; Brooklyn Museum, New York; Hirshhorn Museum and Sculpture Garden, Washington D.C.; Metropolitan Museum of Art, New York; Museum of Modern Art, New York; and the Whitney Museum of American Art, New York.