Capitain Petzel presents omelette papier, a group exhibition of works that engage with the medium of paper in a variety of modes. 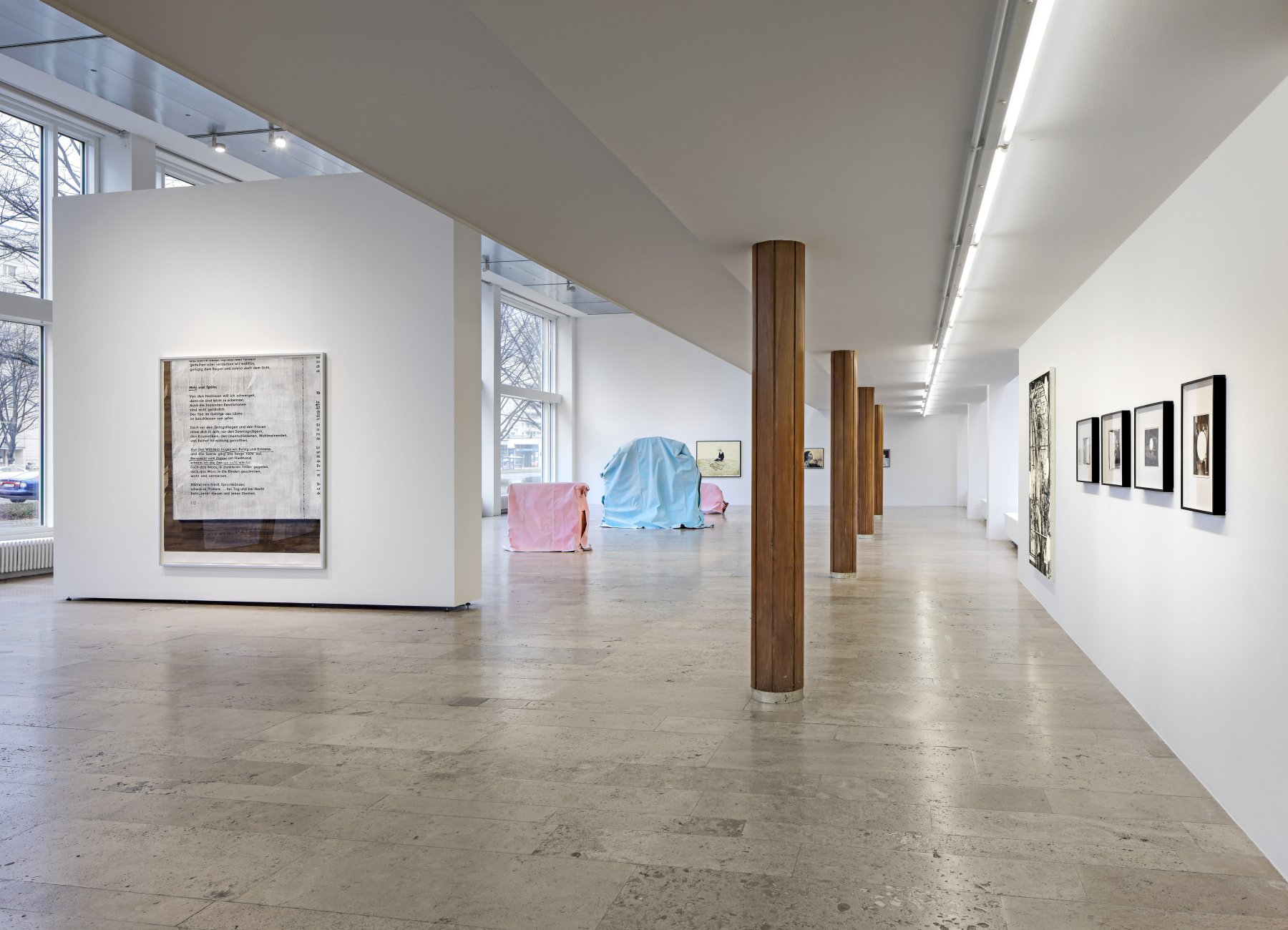 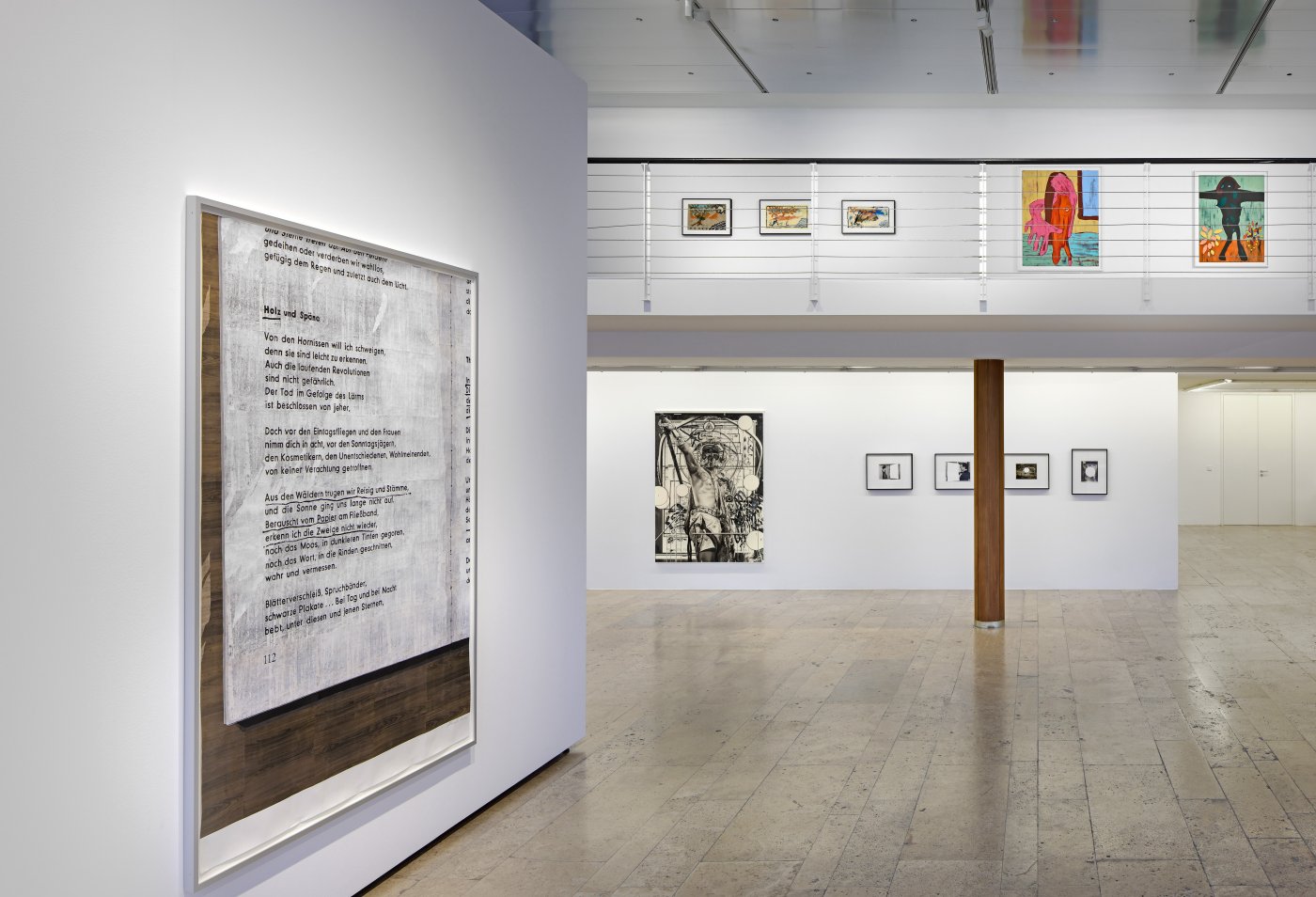 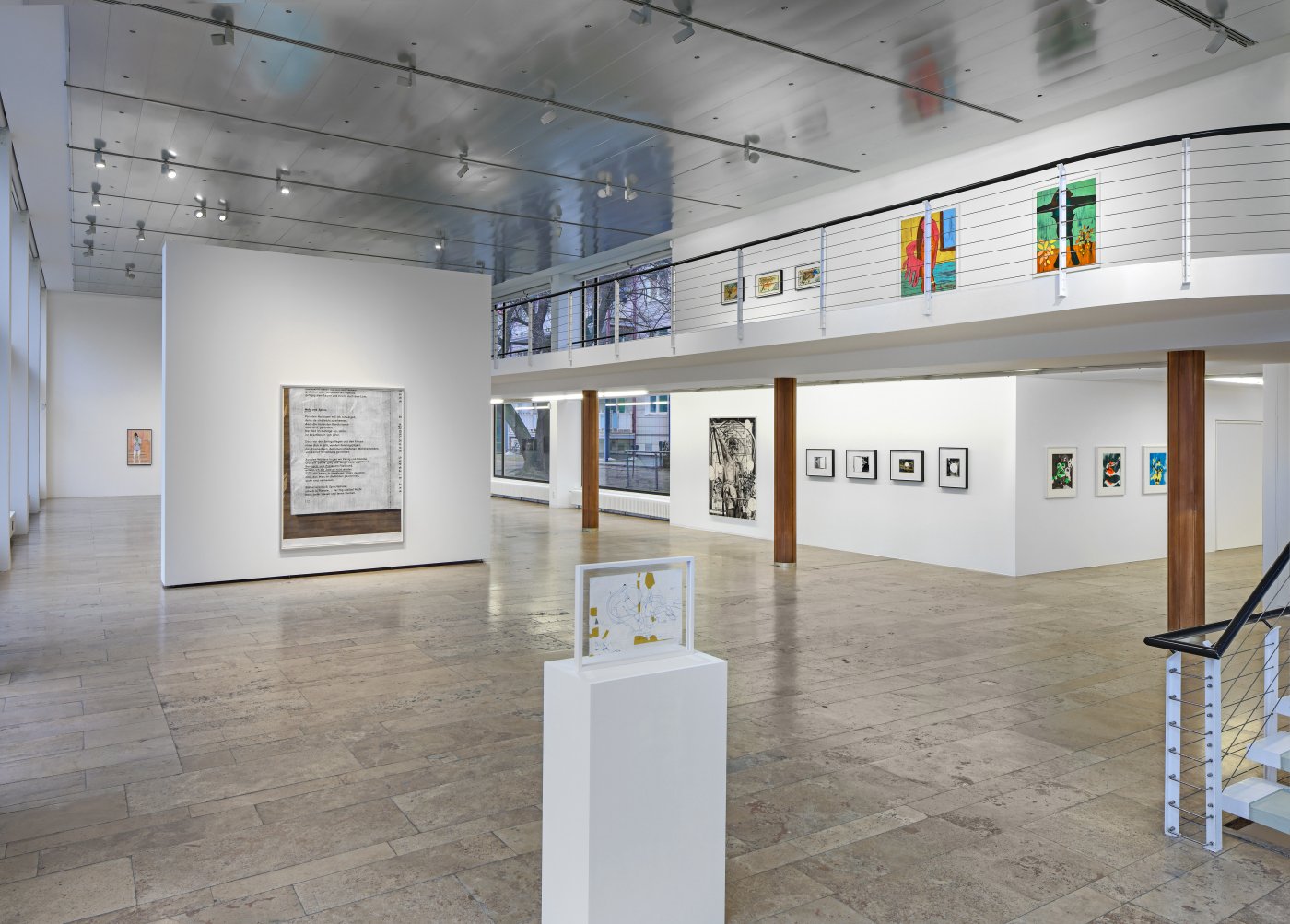 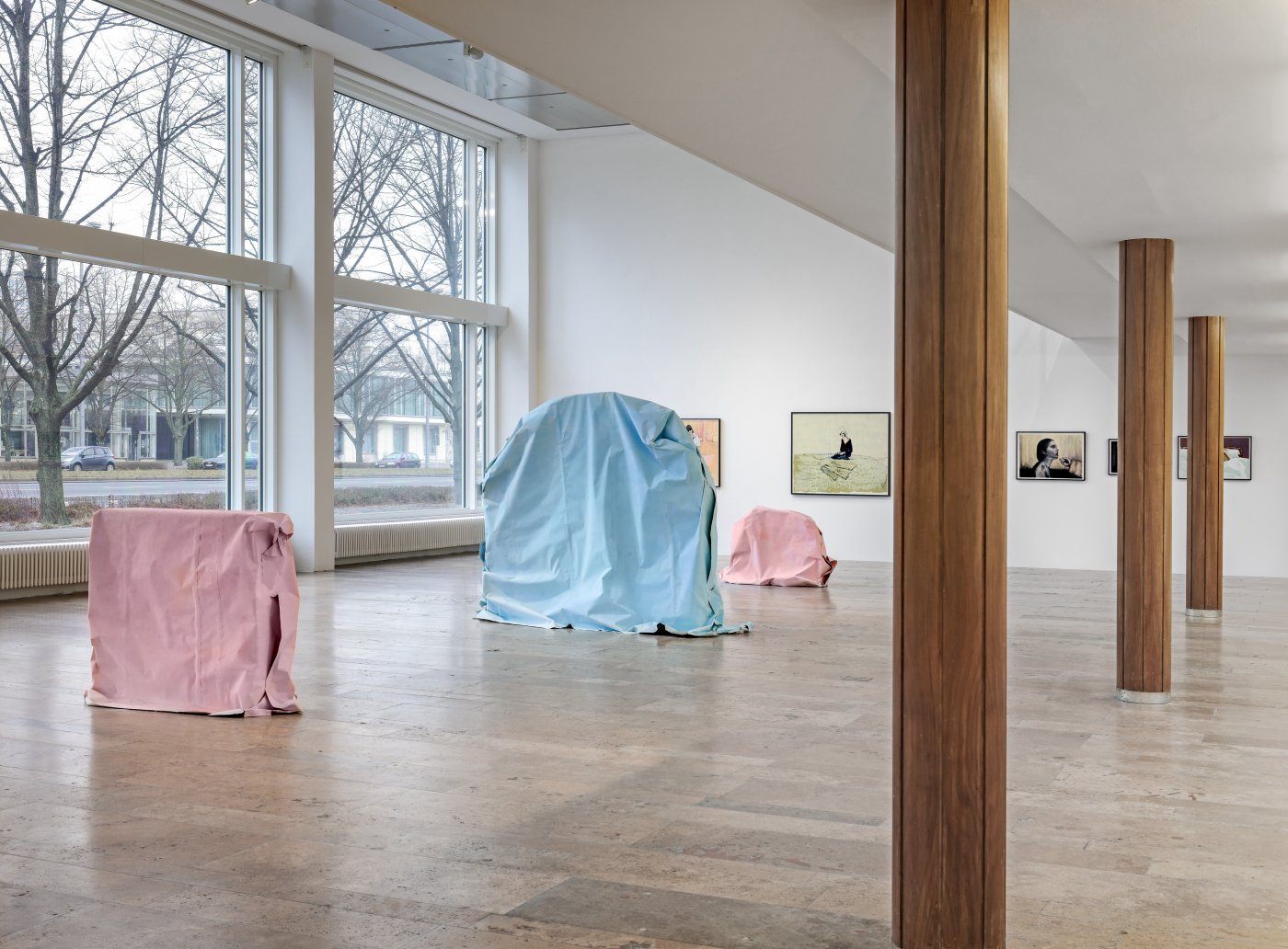 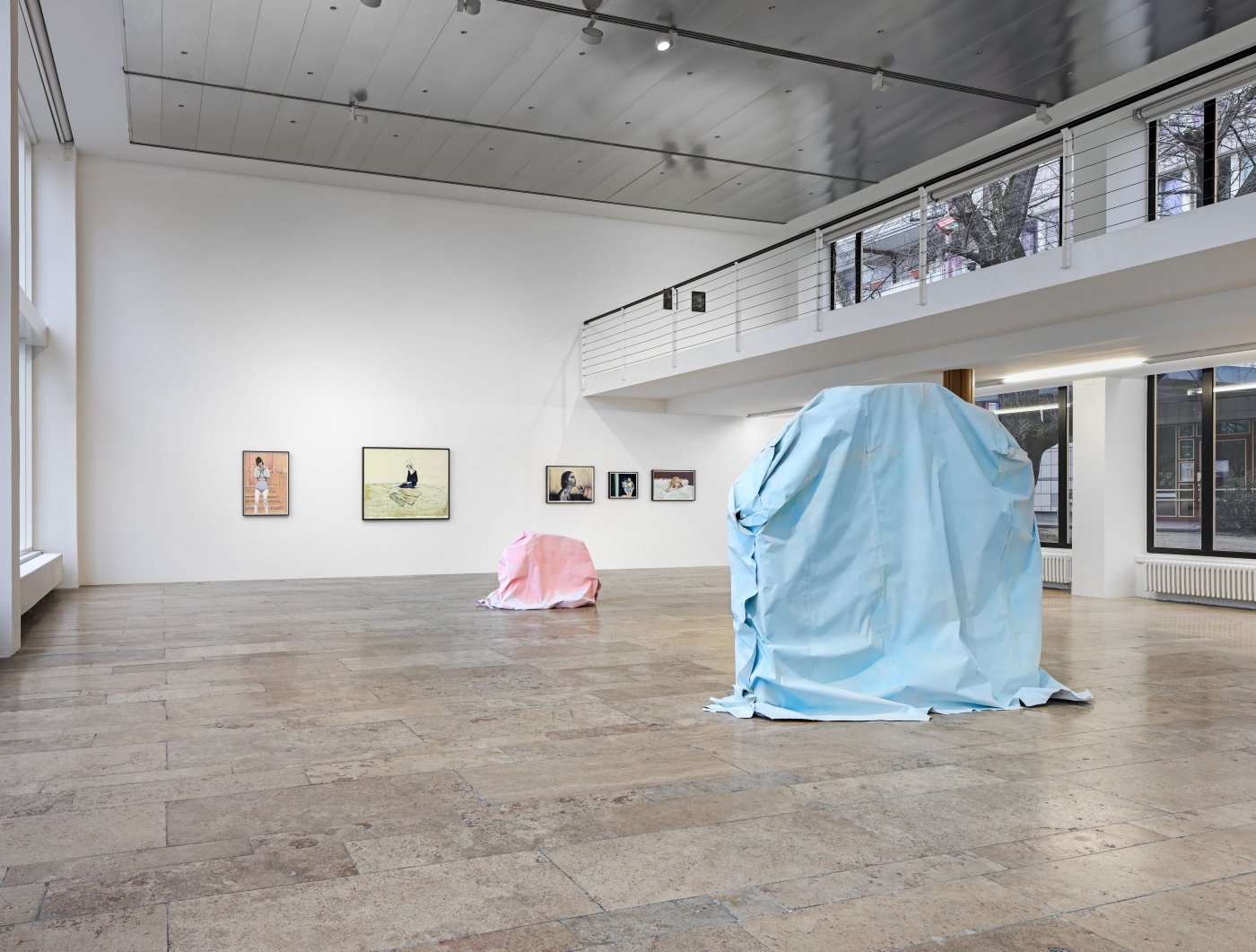 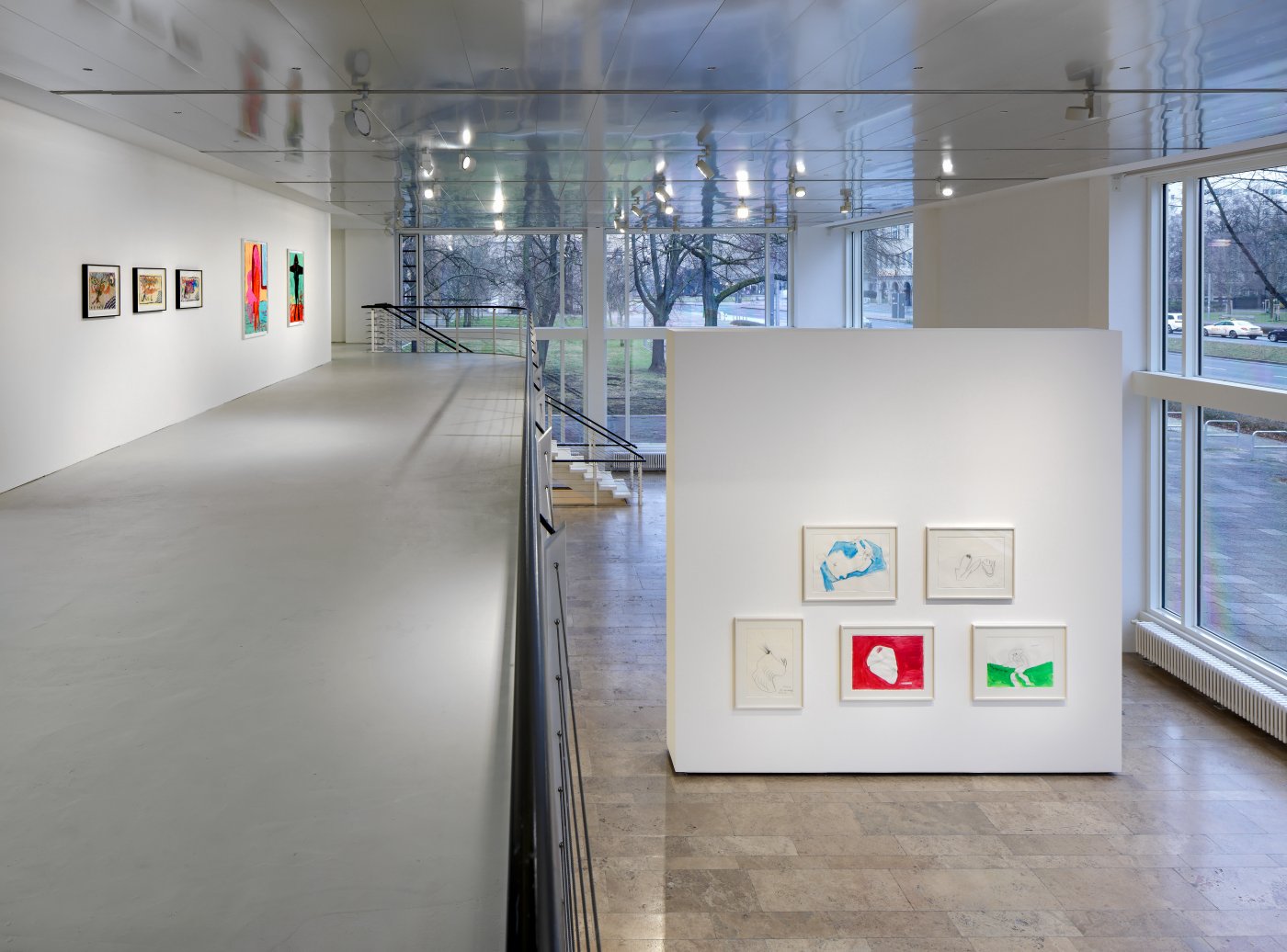 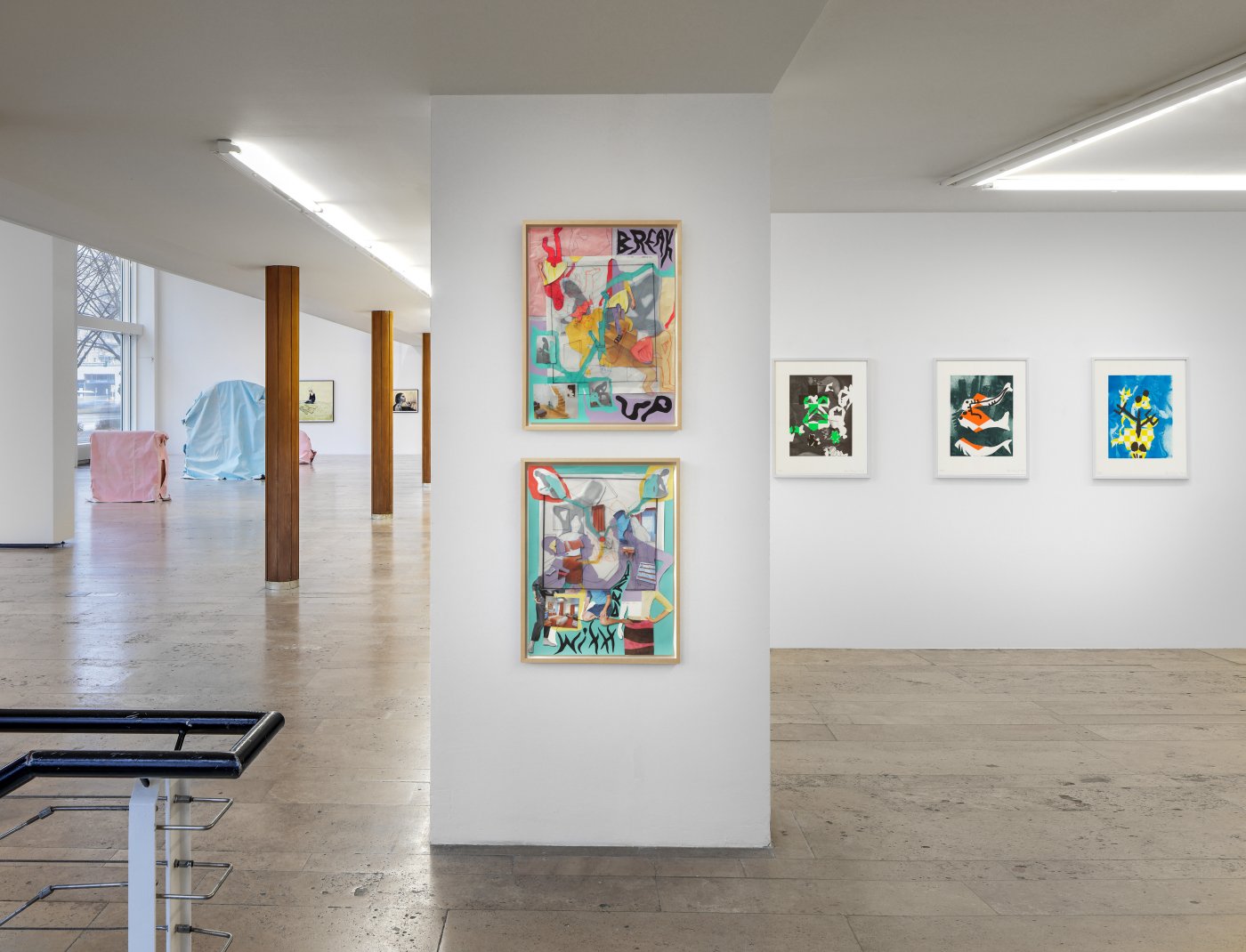 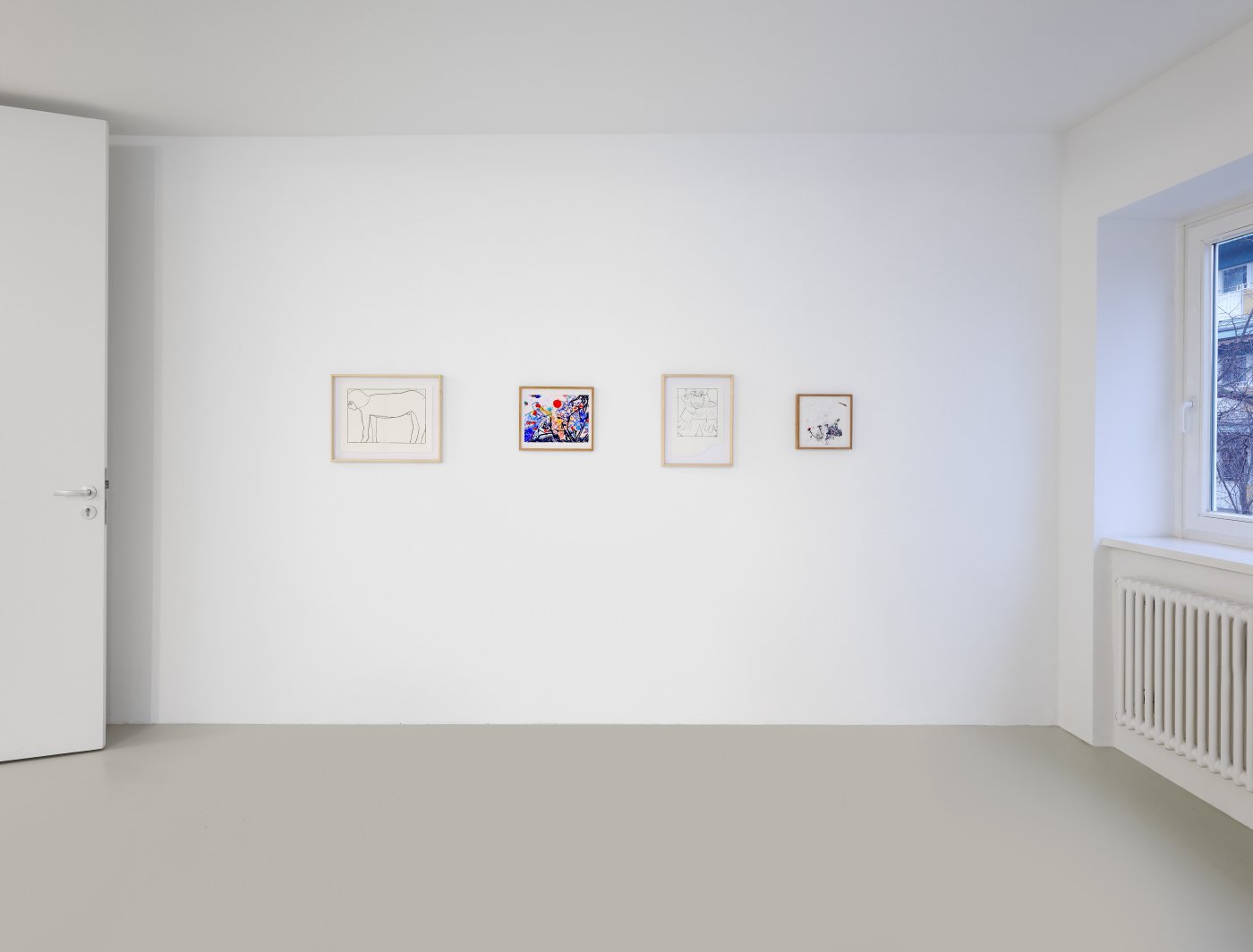 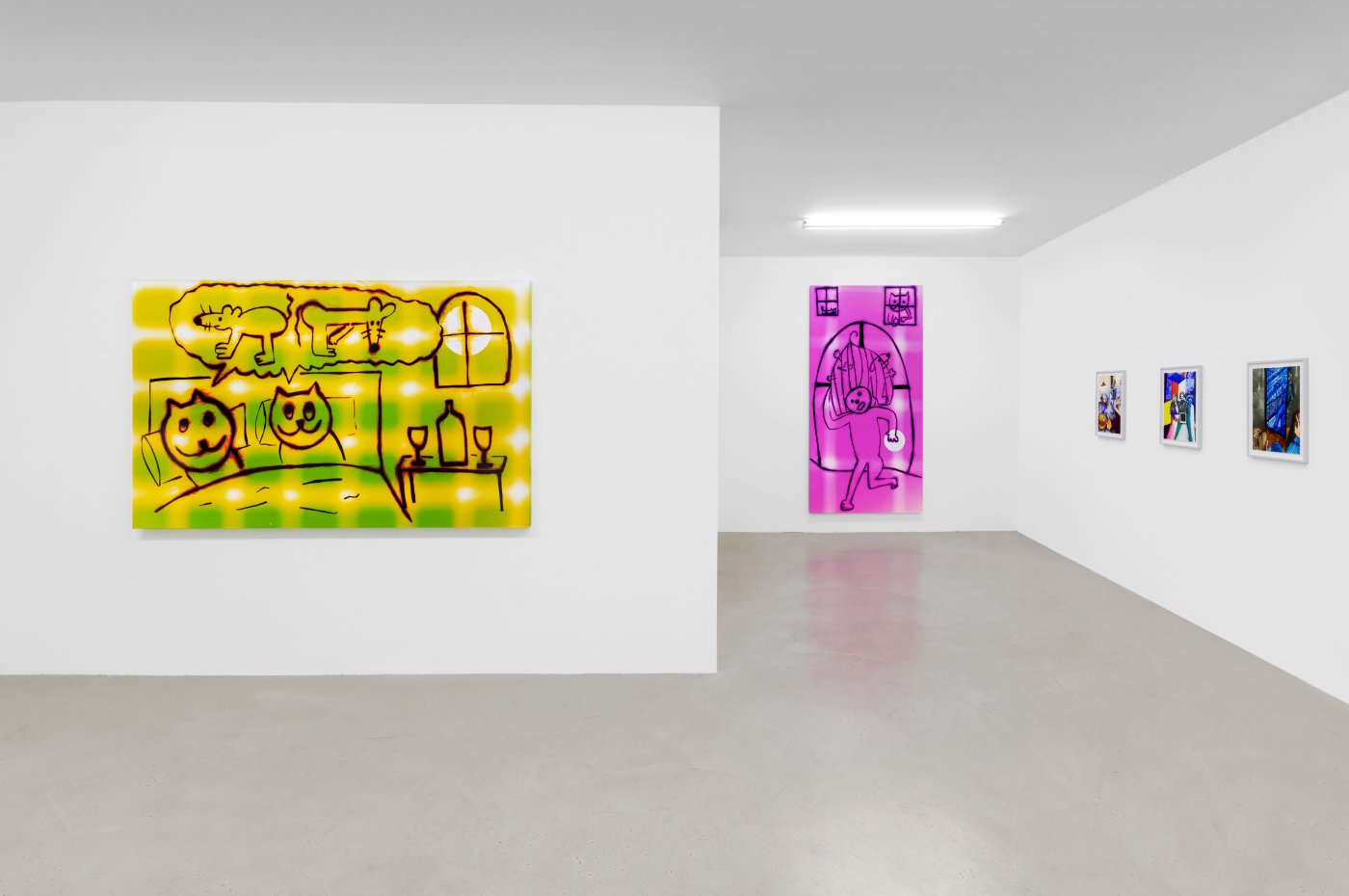 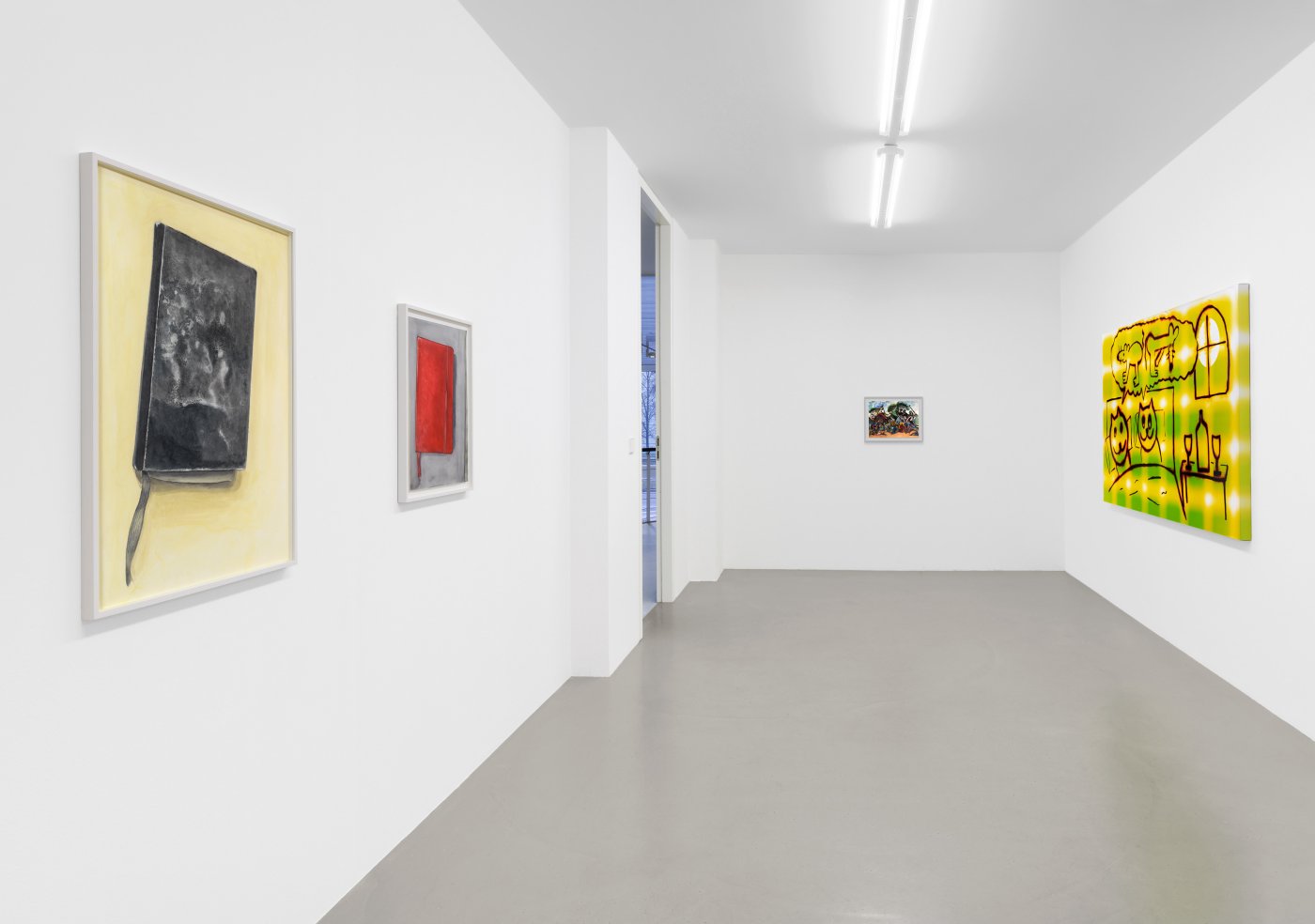 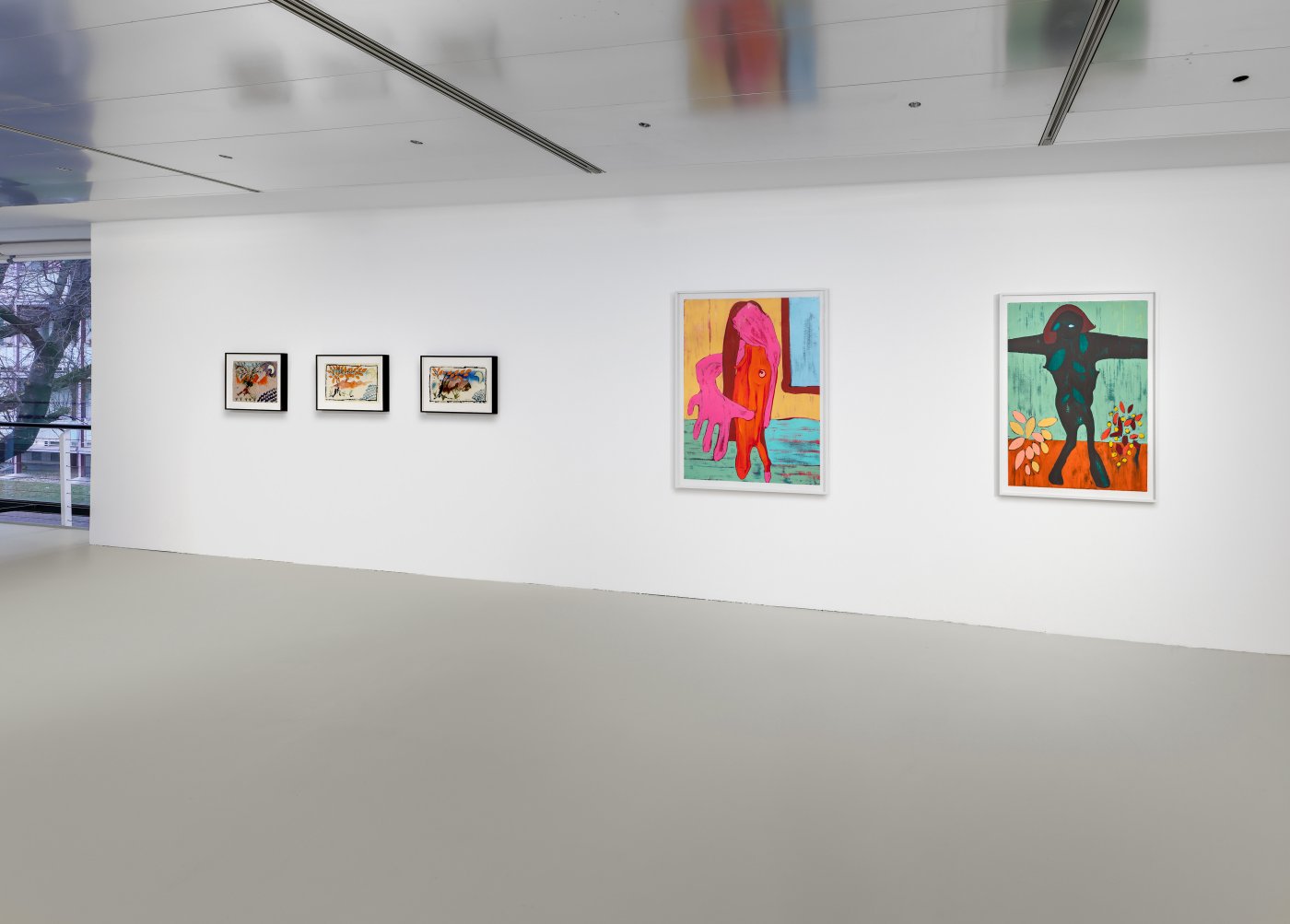 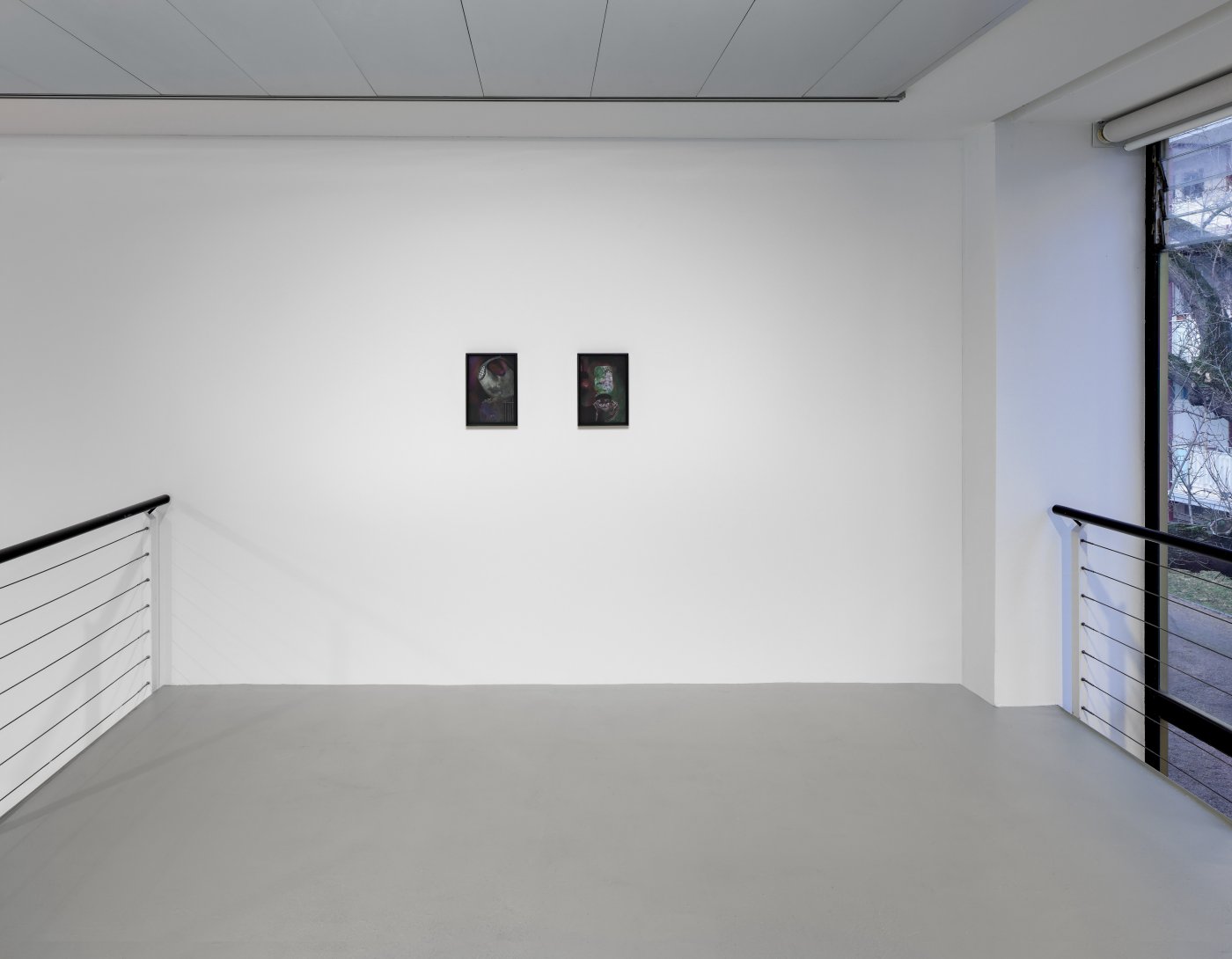 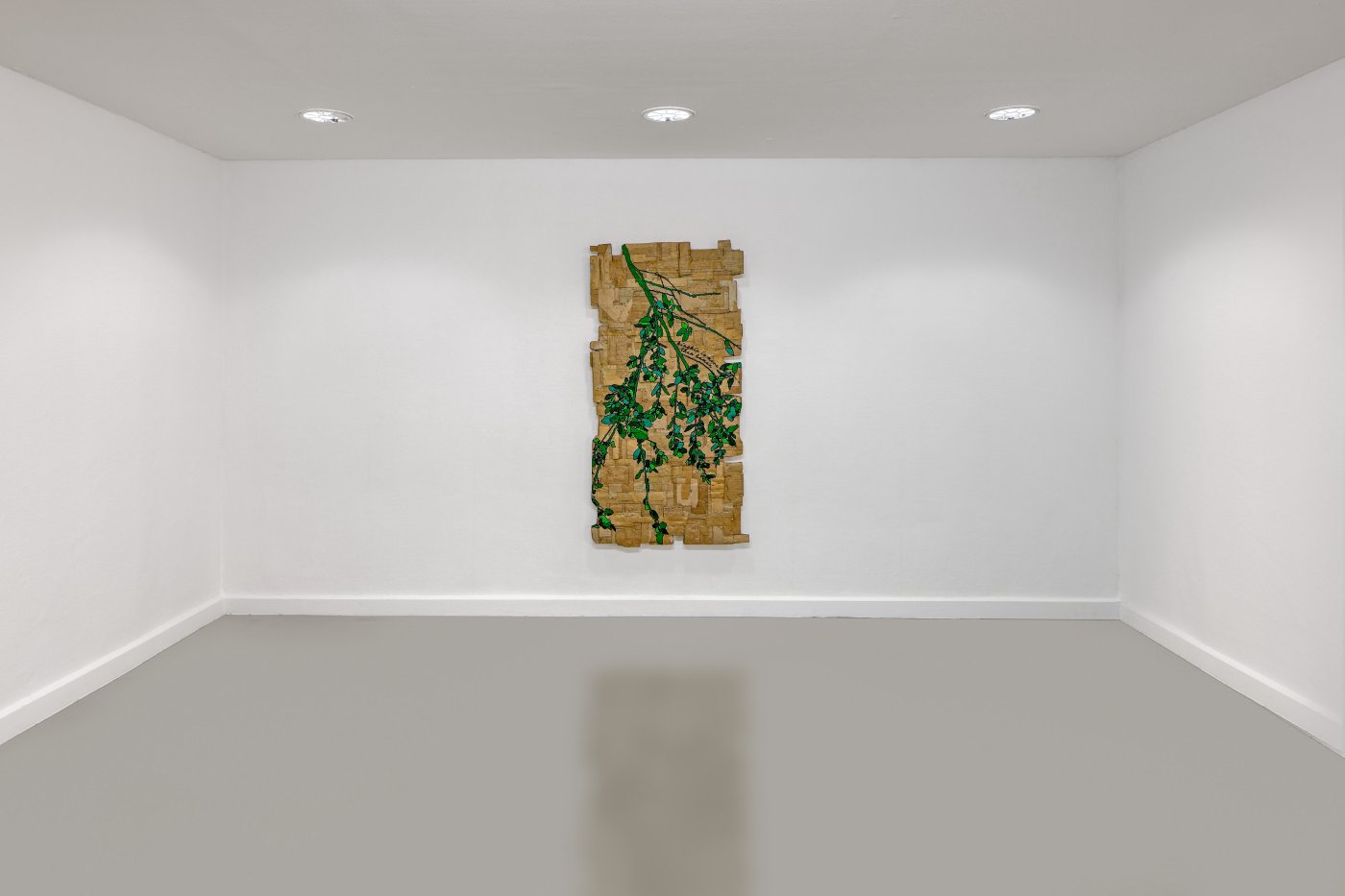 An interplay of delicate forms and pastel colors constitute Karla Black‘s (*1972) abstract and immersive sculptures. The monumental yet ephemeral chalked papers enter into a natural dialogue with the vast, airy space of the gallery while continuing Black’s investigation of materiality and texture, and the emotions they transmit.

Andrea Bowers (*1965) makes use of mostly found material for her installative works, putting into practice her environmentalist ethics by re-using instead of over-consuming. Inspired by narratives of resistance and rebellion, Bowers’ Ecofeminist Oak Branch is akin to a protest sign, featuring a quote by Indian scholar and ecofeminist activist Vandana Shiva: Kinship is More Than Human.

Joe Bradley’s (*1975) works on paper are a product of free association, a spontaneous experimentation with forms and ideas. Certain figurations may resurface years later amidst the abstraction of his paintings, as Bradley revisits the works on paper as a source of inspiration.

The papers and textiles which Isabella Ducrot (*1931) has collected throughout her extensive travels through Asia form the foundation of many of her art works. The series of dream-like landscapes Bella Terra reflect on the beauty of life and the earth’s fundamental virtues.

Jadé Fadojutimi (*1993) translates subjective lived experience into gestural and vibrant abstractions. Her works on paper function as a visual diary, allowing her to spontaneously convey emotion into explosive marks and luminous layers of color, forming a pictorial language that re-appears on a larger scale in her canvases.

Taking photographic paper as his primary material, Hadi Fallahpisheh (*1987) uses a flashlight to draw directly onto it, creating marks and gestures through the light exposure in a dark room. The constraints of darkness pose a limitation to physical perception, resulting in coincidental articulations that arise out of intuition.

Anna Gaskell (*1969) draws on film, literature and the realm of psychology for her open-ended scenes. Decidedly focused on the visual language of the late 19th and early 20th century, Gaskell’s compositions are imbued with a narrative tension which contains subtle implications and resists a straight-forward reading.

Stefanie Heinze‘s (*1987) drawings are the starting point of her artistic practice and are created in a collage process in which forms are added or continually removed, yielding her multi-layered, fantastic and unexpected painterly figurations. Through it‘s presentation on a pedestal which reveals both sides of the drawn-on paper, the work takes on the three-dimensionality of an object.

Charline von Heyl (*1960) makes use of various printmaking techniques, which she applies in layers – the works on view combine both intaglio and relief printing. Von Heyl has long been inspired by the aesthetics of the paper medium, saying: “I have always been a sucker for the look of prints and have often faked that look in my paintings, so maybe it makes sense that I am using printing techniques now in the same way that I paint, so that one cannot follow the steps.“

Sanya Kantarovsky’s (*1982) new watercolor Deep State gives insight to the artist’s upcoming solo exhibition in the gallery in April 2022, which will center around a corresponding oil painting. The title is a paradoxical word play which alludes to the idea of potential unauthorized and manipulative power structures, but also to a transcendental mental state. Both notions are reflected by the motif of the usually hidden internal organs depicted.

Paper has been a continuous complement to the vivid oil paintings of pioneering Austrian artist Maria Lassnig (*1919, † 2014), taking on the vital role of providing an immediate and impulsive method of externalizing her inner thoughts. The expression of subjective interior sensations of the body has been at the center of Lassnig’s practice since the beginning of her career, coining the notion of Körpergefühlsmalerei, a now hugely influential concept which has shaped the tradition of figuration through to our contemporary age.

Widely known as a pioneering video and multimedia artist, Marcel Odenbach’s (*1953) work kurz und bündig reproduces Bertold Brecht’s revision of the poem Holz und Späne by Ingeborg Bachmann. Brecht evidentially held the poems of his contemporary in high esteem, nevertheless felt it necessary to ‘correct’ her. Always operating in a mode of social criticism, Odenbach investigates the skewed power relation between Brecht and his younger female colleague, a privilege which he exercises by ‘improving’ her poem, in his eyes.

Pieter Schoolwerth’s (*1970) multi-layered collages present an analog representation of his complex painterly process. Incorporating imagery from photographs, sketches and art historical iconography, elements are manually arranged to produce a composite which reminds of the digitally created models of his multimedia paintings. These complex figurative scenes relate how technology, or other ‘forces of abstraction’, as he calls them, shapes our world.

Across performance, sculpture and painting, Barbara Steppe’s (*1956) works are meditations on time. Diaries are naturally important to an artist who chronicles temporality, depicting her own in the watercolors Tagebuch / Moleskine – self-portraits of sorts – visually condensing the events of a day into undisclosed entities.

The photographic collages of John Stezaker (*1949) examine the pictorial culture of mass media as it was emerging in the mid 1970s. In a contemporary context, they function as a tracing of images in a pre-digital paper world; a crossing over between temporal realities. Stezaker splices and superimposes found images into photomontages to create elegant juxtapositions and uncanny new scenes.

Mikolaj Sobczak’s (*1989) research-based practice centers around political activism, expressed through the creation of imagined, alternative histories that weave together historical and contemporary references. Focusing especially on key figures in LGBTQ resistance movements, Sobczak foregrounds the lived experiences of marginalized subjects of the past and present.

Hiroki Tsukuda (*1978) composites found and created images, coding them with computerized characters and hand-painted hieroglyphics. Inspired by the legendary Japanese actor Toshiro Mifune, the figure of Out the Gate forms a counterpart to the artist’s series of female robots, merging cyberpunk fantasy and real-life space exploration with elements of the cityscapes of the artist’s native Japan.

The subjects of Nicola Tyson’s (*1960) works in the exhibition dissolve and re-construct themselves in complicated contours, expressing the subjective feelings of embodied experience. Tyson used the term ‘psycho-figuration’ to describe her investigation in turning forms ‘inside out’, resulting in distorted figurations of mesmerizing colors, profound and humorous at once.

Capitain Petzel would like to thank Galerie Gisela Capitain, Cologne and the Maria Lassnig Foundation, Vienna for their vital support in realizing this exhibition.