The following text was written by José Carlos Diaz, Chief Curator at The Andy Warhol Museum, to accompany the exhibition

Born in Milan and based in Anchorage, Alaska, Paola Pivi materializes her artistic visions into original manifestations of whimsical and unexpected encounters. In conjunction with her current exhibition Paola Pivi: I Want It All at The Andy Warhol Museum in Pittsburgh and You know who I am at the High Line in New York, Perrotin New York presents a solo exhibition by the artist. Pivi has installed an immersive project, entitled Free Land Scape, a 100 foot-long denim tunnel that weaves across the gallery’s third floor space. 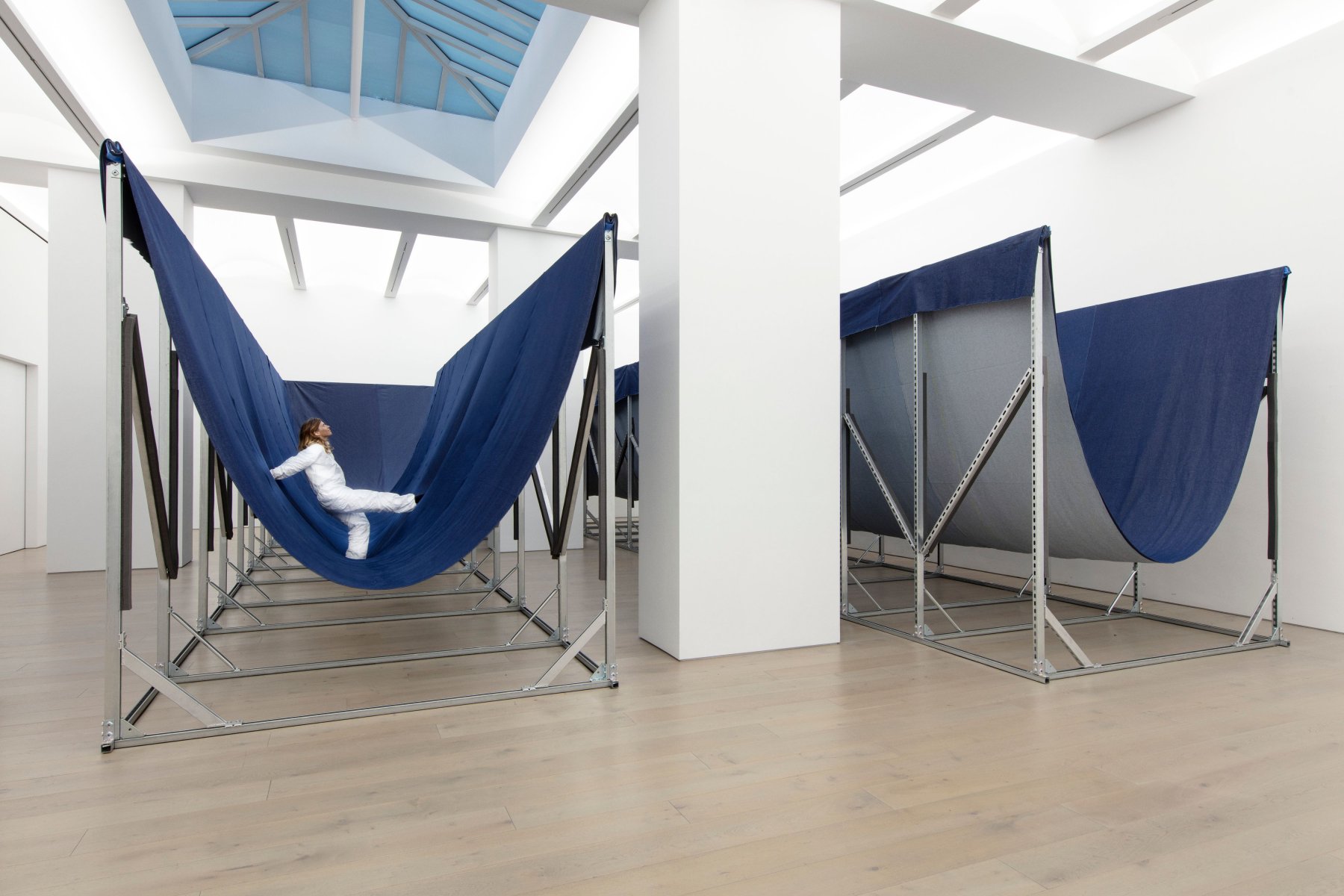 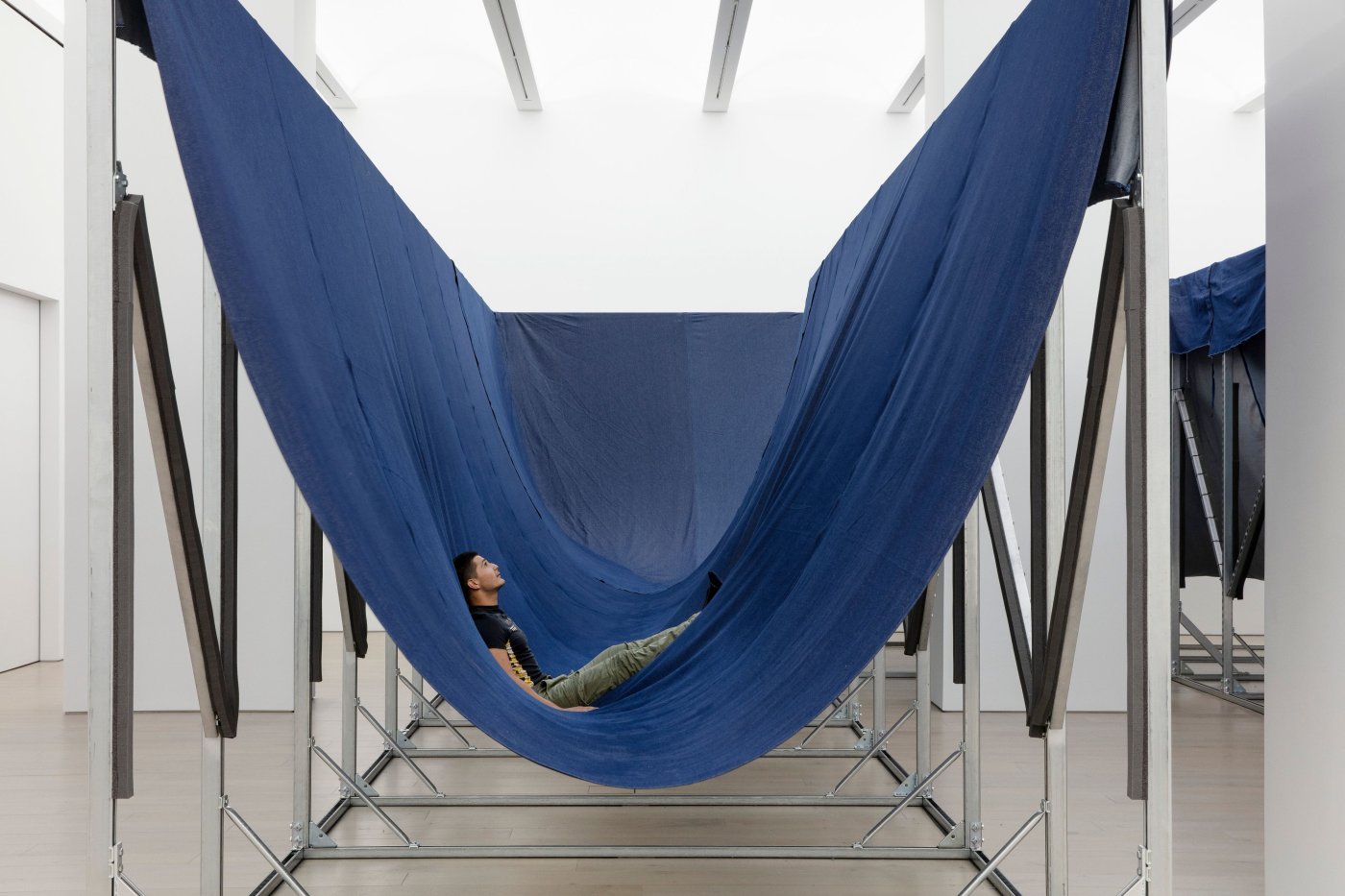 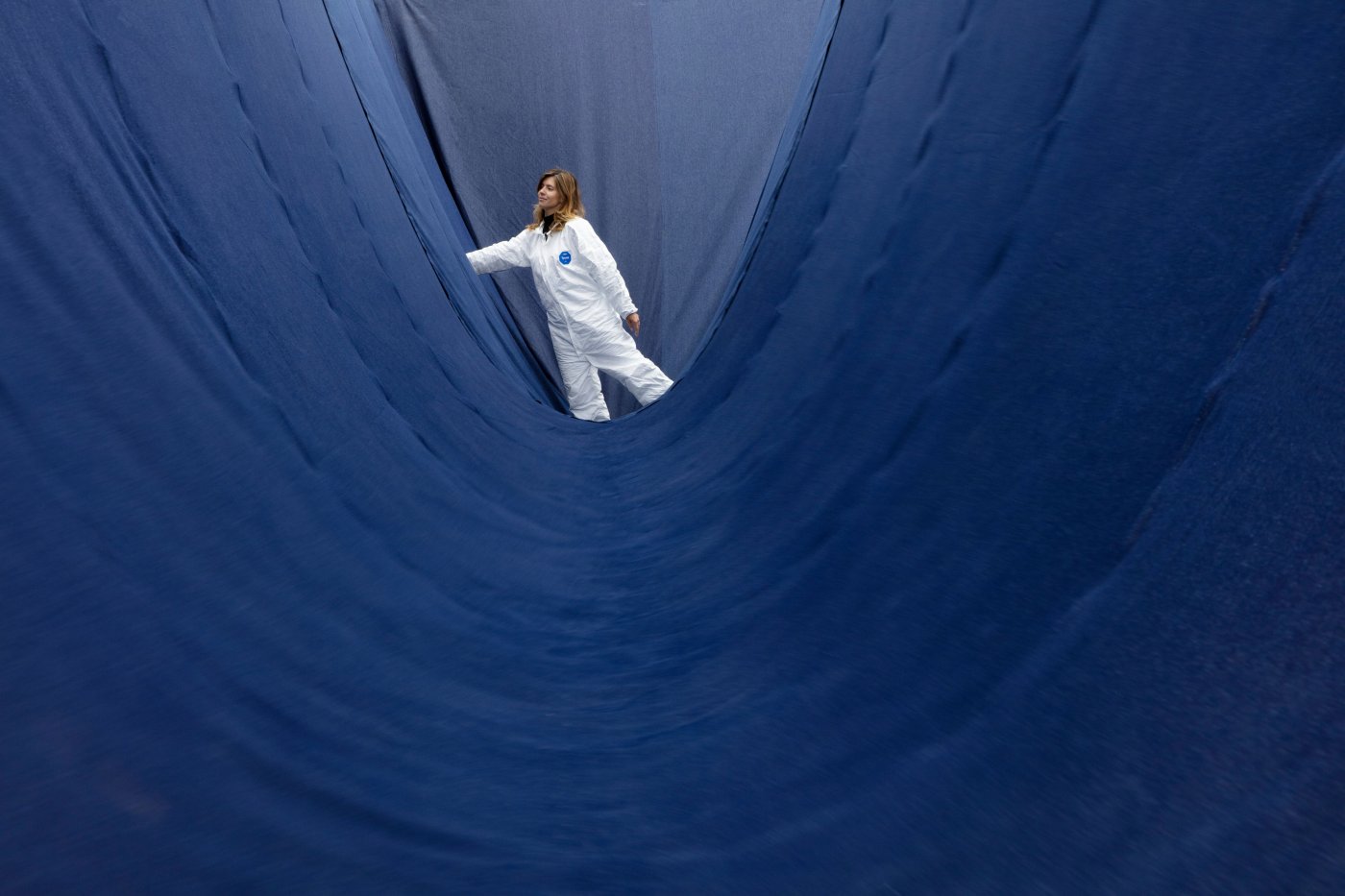 The exhibit, made of a single new artwork, considers visitors and the vacant white gallery as a crucial forum and catalyst for this work. Pivi has noted, “The white cube is actually a magic cube of protection, which allows an artist to make the best possible art and the viewer to focus in the best possible way” (1). Conceived and conceptualized since 2015, and with prototypes engineered and built in the past two years, Free Land Scape is a site-specific sculpture designed with a metal framework and fabric. Draping blue denim creates a soft cavity that can support human bodies from within. Individuals can gently insert themselves on the blue surface of the fabric and crawl, walk, swing, or tumble through a U-shaped corridor. Navigating the interior, participants are playfully forced to surrender themselves to the swaying yet stable design, resulting in joy and amusement.

“Free Land Scape creates a little magic for the adult who climbs on it: suddenly the body becomes one of a child again, fearless of falling, swimming in denim, exploring space and movement in a fluid and weightless way,” Pivi explains. The title of the exhibition and the artwork was drafted by Pivi’s partner, the songwriter and composer Karma Culture Brothers, who frequently takes on a collaborative role in her practice. Three compatible words, free/land/scape, consider the work as an independent territory made to explore as an act of temporary escapism and freedom.

Throughout Pivi’s career she has been known for selecting recognizable materials and using them to excess: pearls, feathers, ribbon, for example. Here, Pivi chooses denim as her primary medium. It is a material that Pivi has experimented with and previously used in her practice. Denim, popular for garments and eventually applied to design in the nineteenth- century, has a distinctive weaving technique made from blue and white fibers, resulting in an indigo blue surface with white backing (2). Understanding the fabric, Pivi uses the two-toned denim and a special metal framework from Italy to build a hybrid, Hard-edge styled object turned interactive artwork.

Pivi, who also has a scientific background, has researched and developed several ambitious sculptural installations made for interaction. From Money machine (true blue, baby I love you), a minimalist cash machine that spits out currency, to GRRR JAMMING SQUEAK, a public recording studio dedicated to the sounds of animals installed in the streets of Rotterdam, Pivi has carefully considered her audience and their experience. Even initial and passive observation from the general public often develops into active participation, because there are typically few rules or expectations from the artist. In particular, Untitled (slope), 2003, a site-specific mound of grass was designed and built at a precise angle to maximize the speed when rolling down it, and World record, made of 80 mattresses with a denim paneling, was installed in 2018 at The Bass in Miami Beach and then MAXXI in Rome as an architectural habitat for recreation and congregating. It is worth noting that Pivi has reinstalled such interactive artworks in New York, Pittsburgh, and London, with similar reactions of whimsy from an audiences made up of strangers.

Similar to her previous interactive installations, in Free Land Scape, voluntary fun and unexpected play complete the artwork. Famed cultural historian Johan Huizinga wrote, “Play cannot be denied. You can deny, if you like, nearly all abstractions: justice, beauty, truth, goodness, mind, God. You can deny seriousness, but not play” (3). Pivi’s own artistic practice denies you nothing!