Charlie James Gallery presents Promised Land, the gallery’s third solo show with Los Angeles-based artist Patrick Martinez. In this show, Martinez considers his life and his city at an inflection point, himself a new father looking to the future and pondering how his family will fit into the changing landscape of Los Angeles, while at the same time reflecting on the city as it was when he was a child growing up in Pasadena and the San Gabriel Valley. 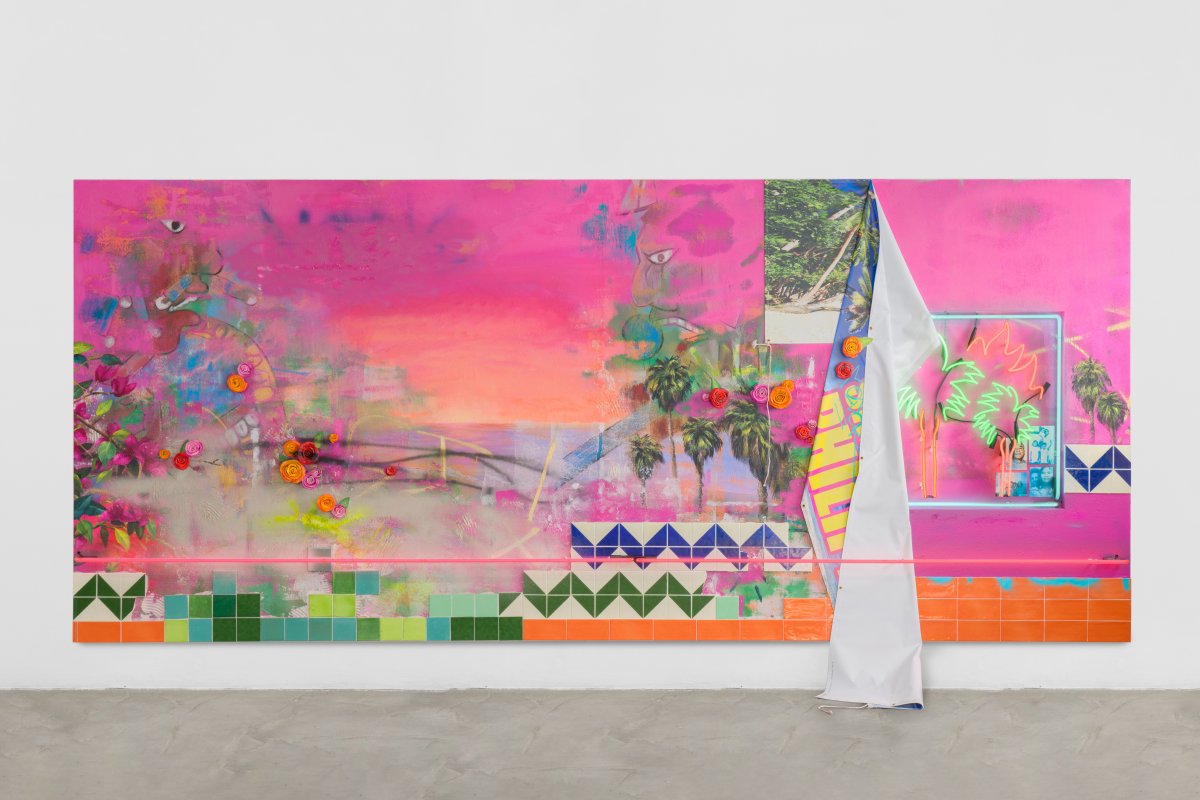 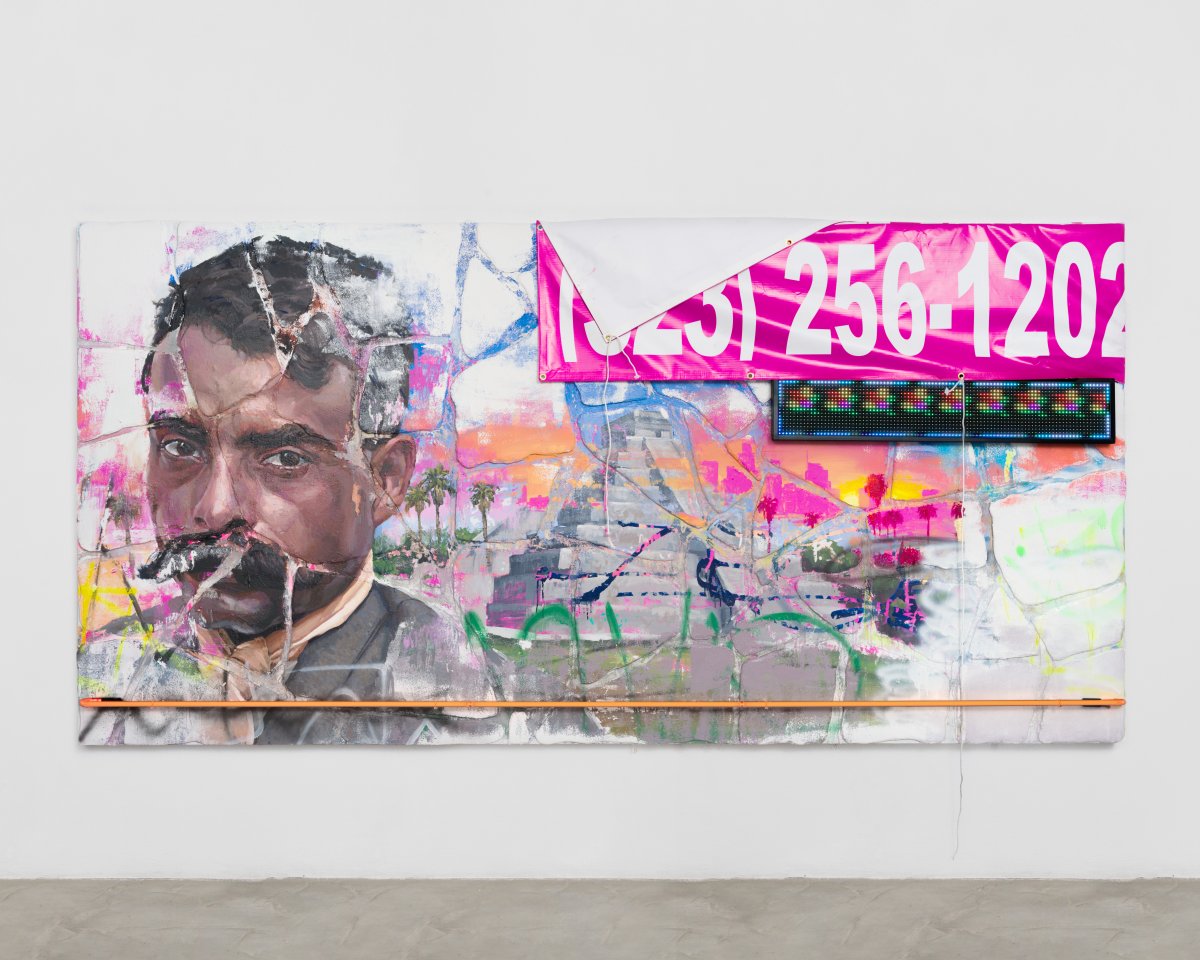 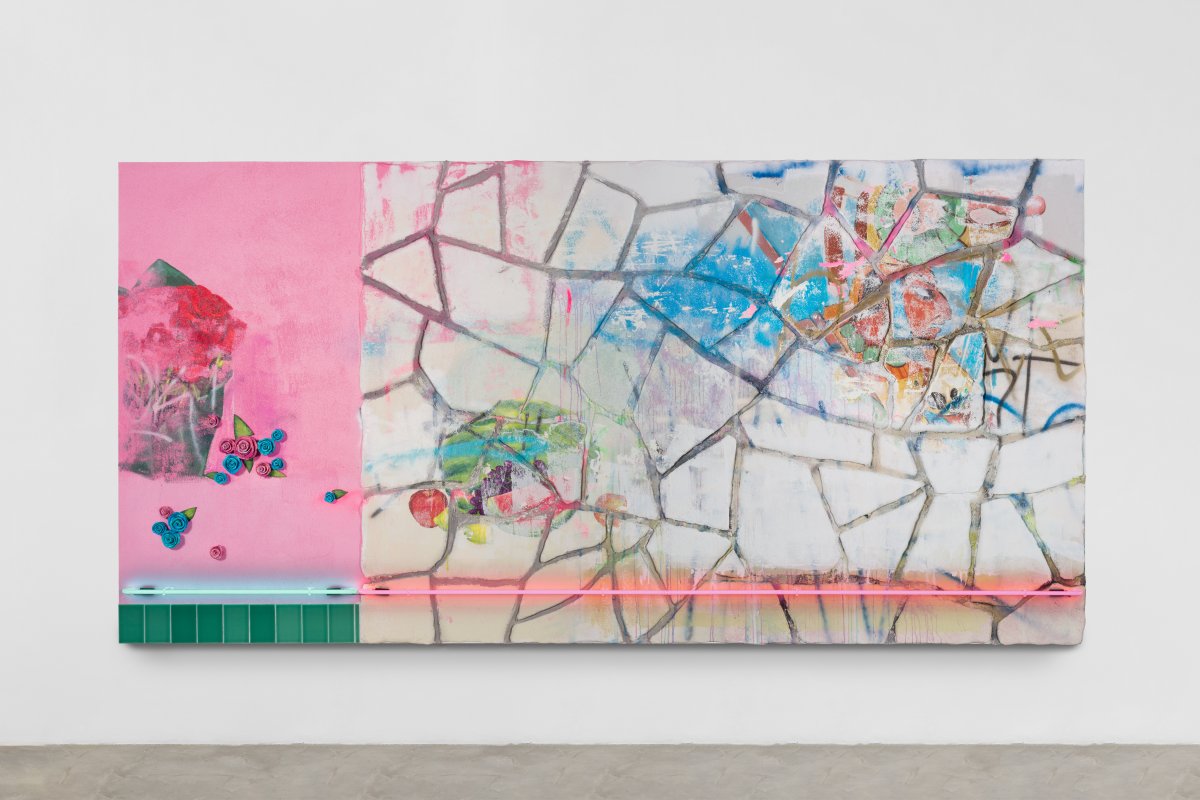 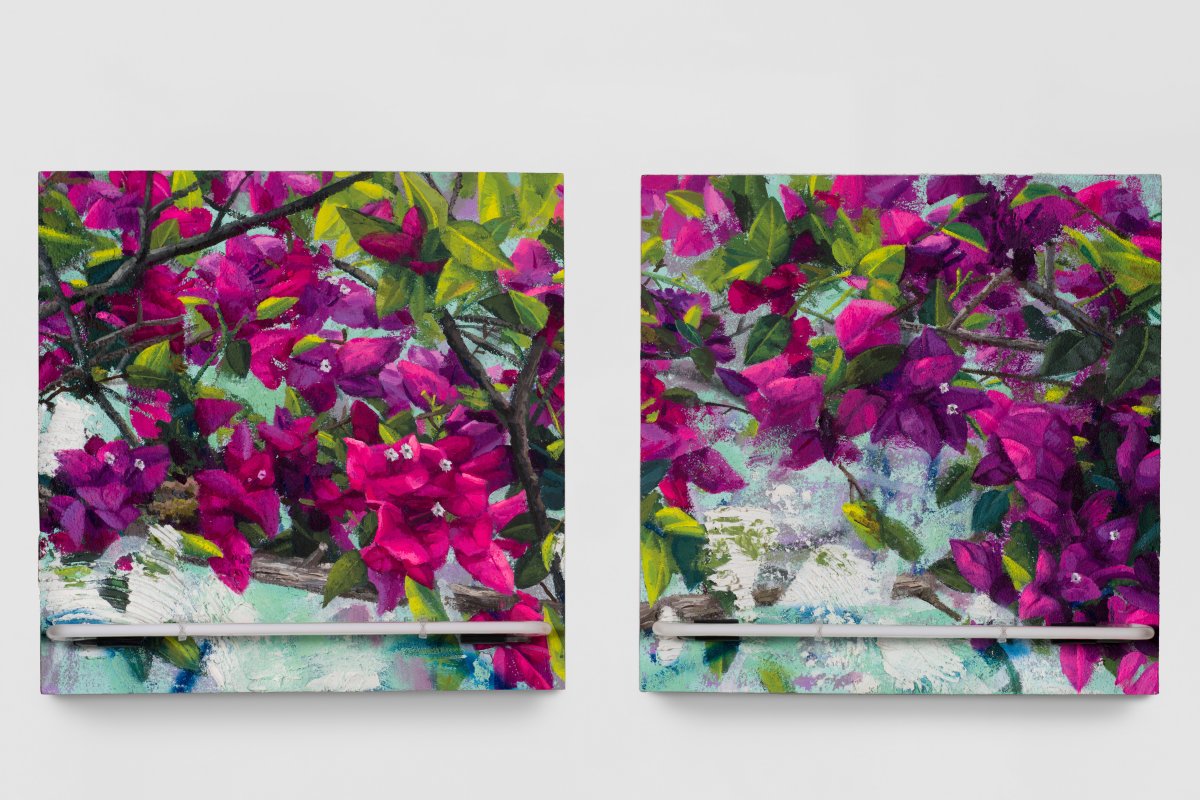 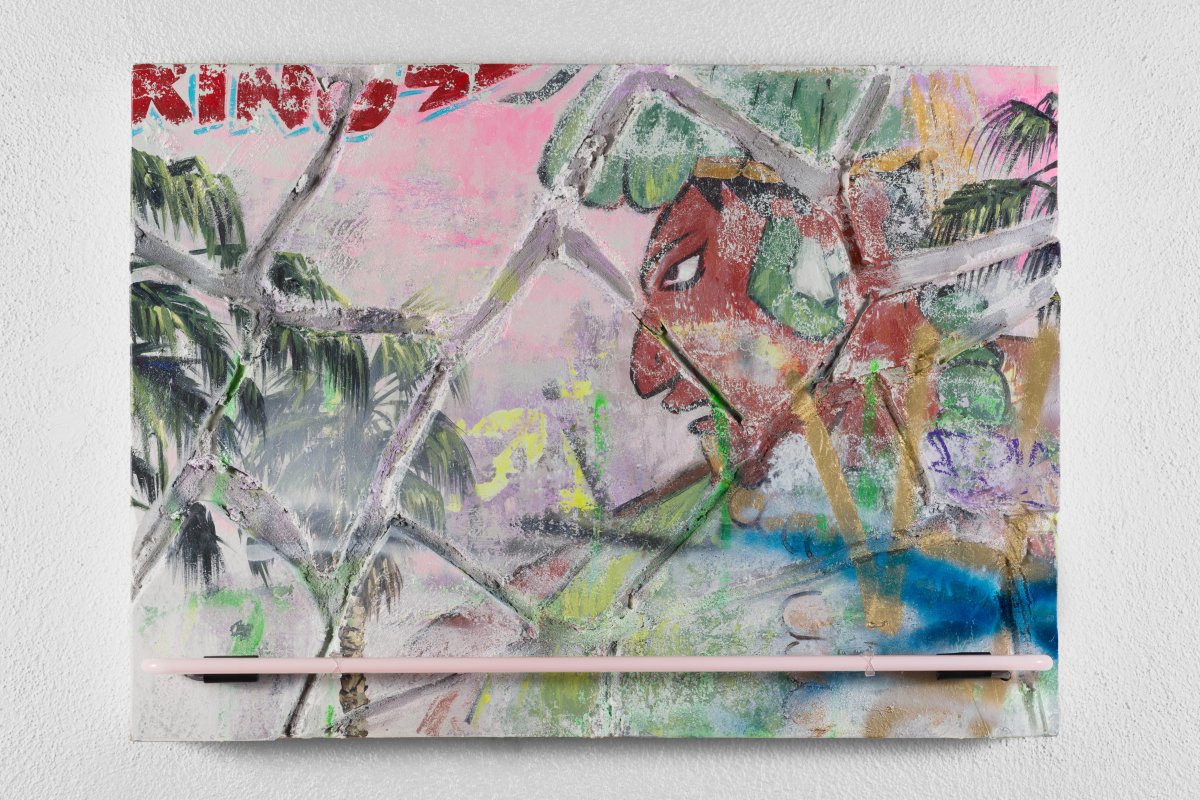 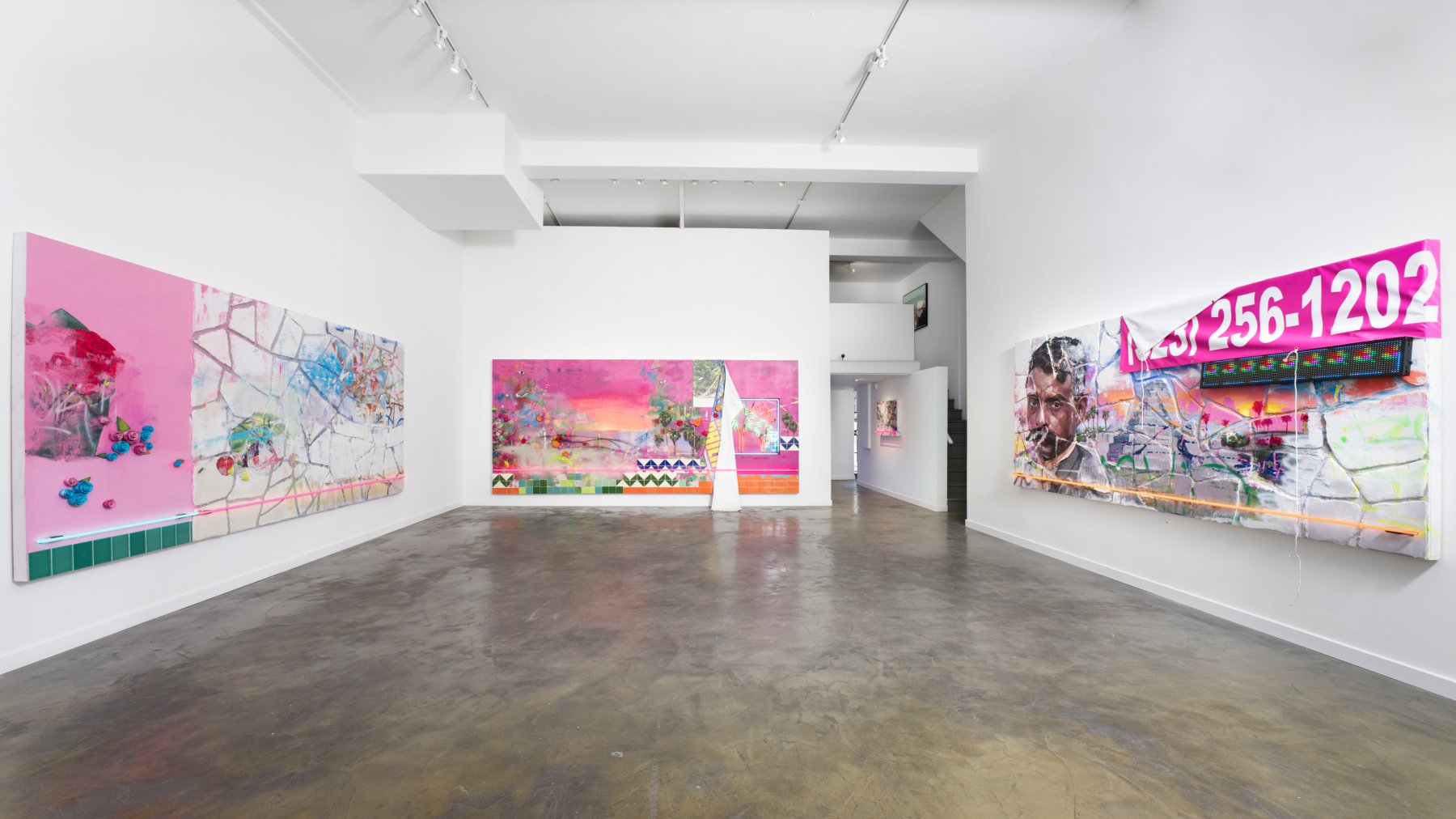 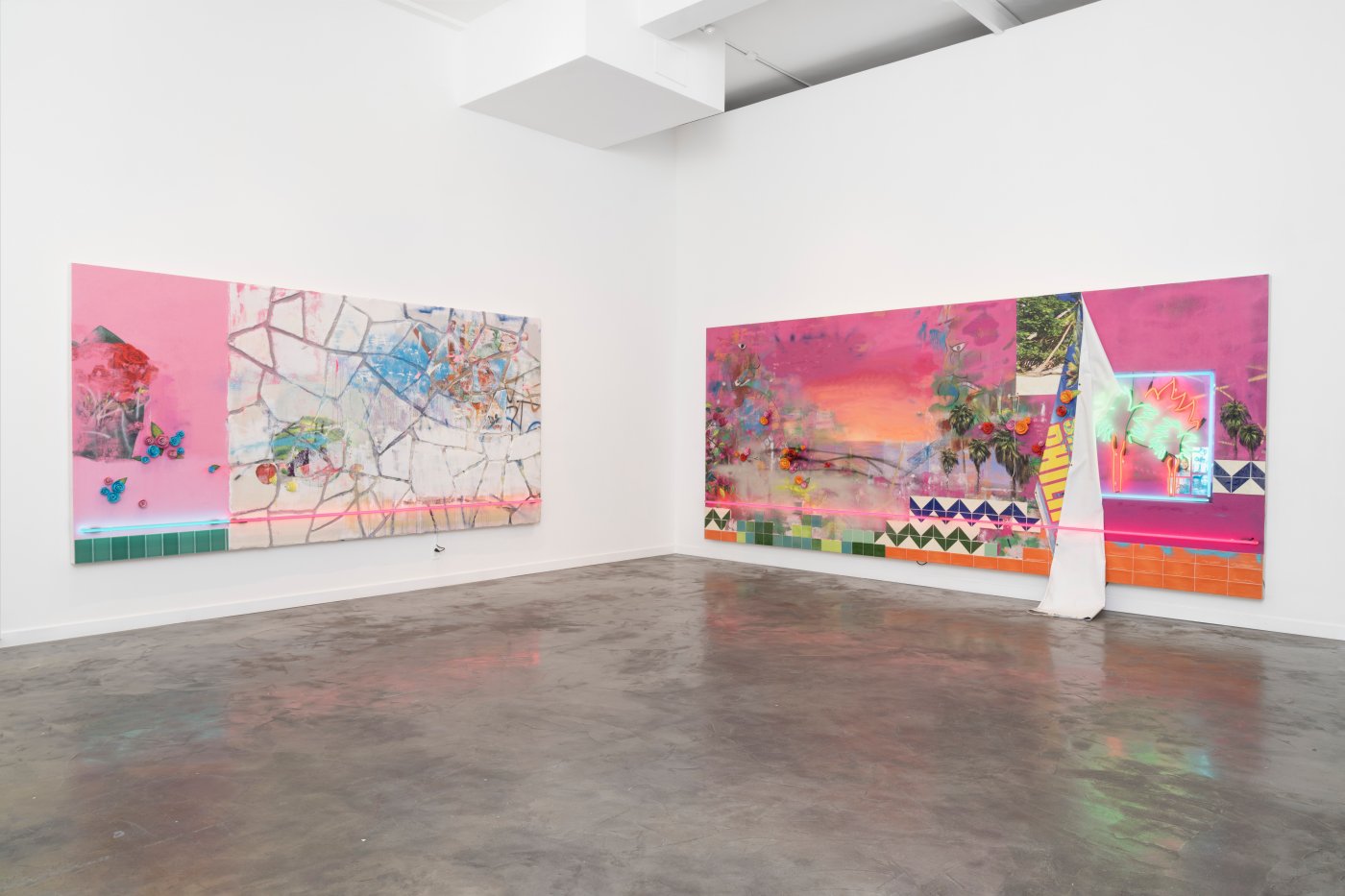 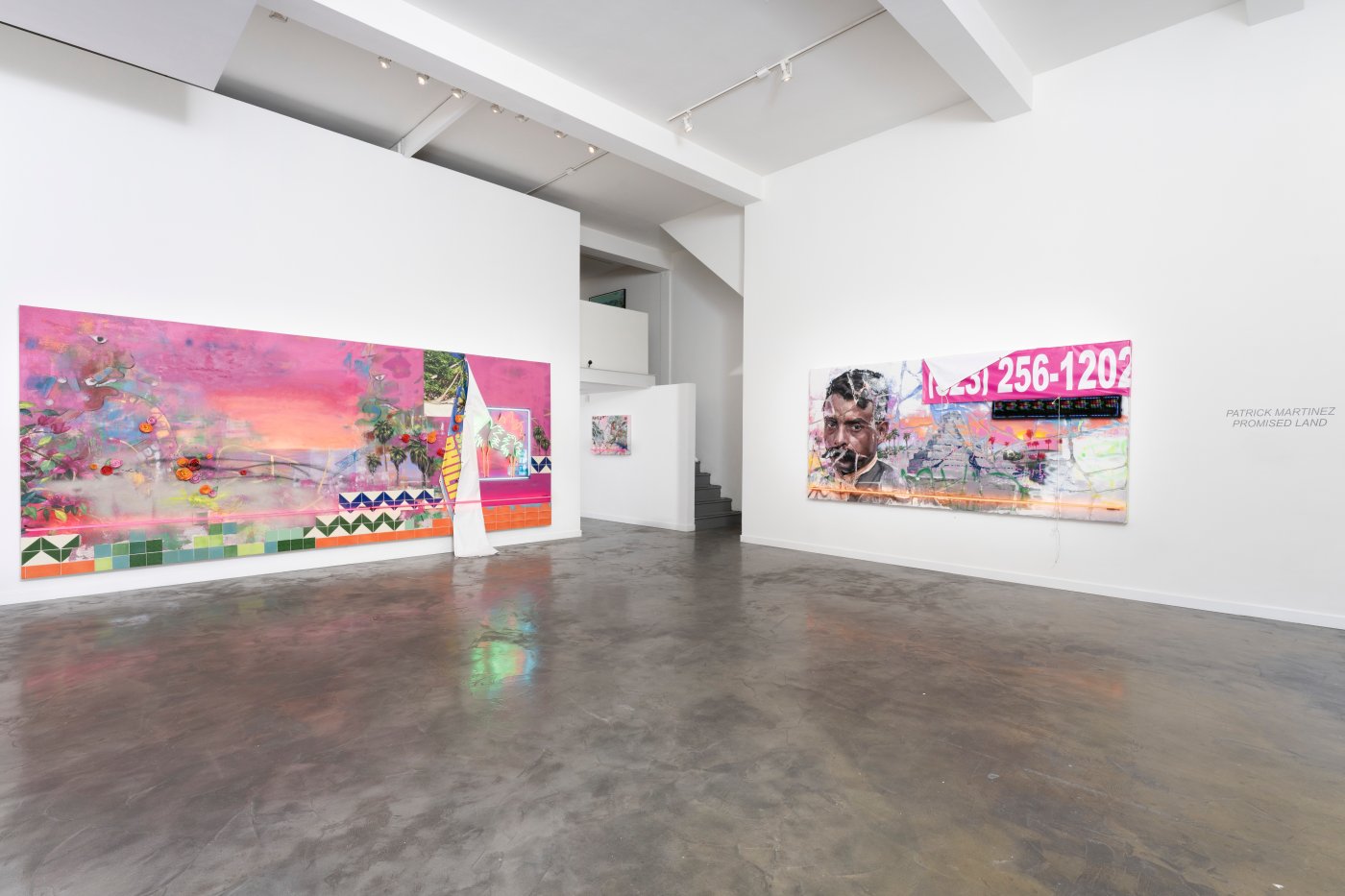 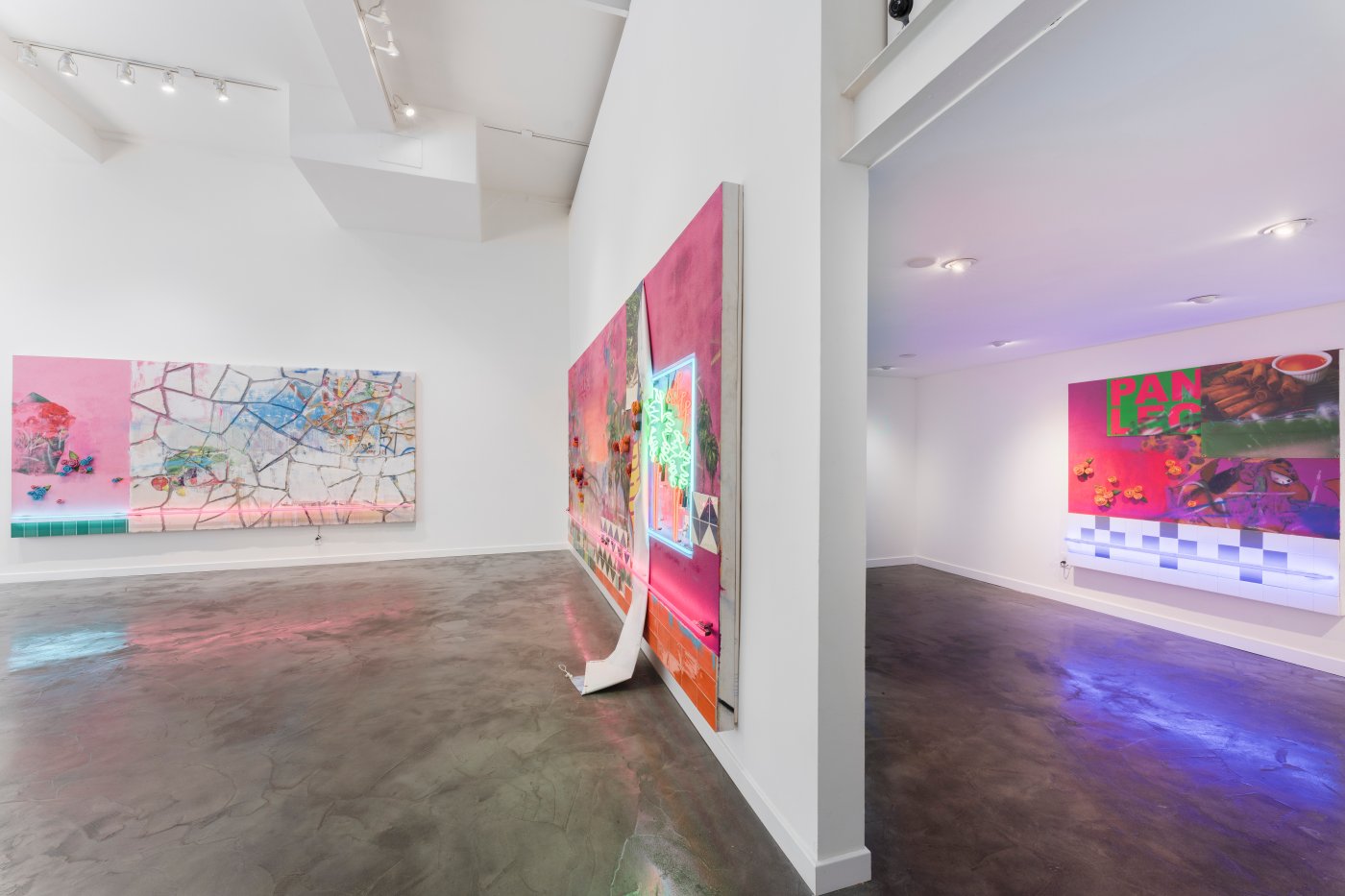 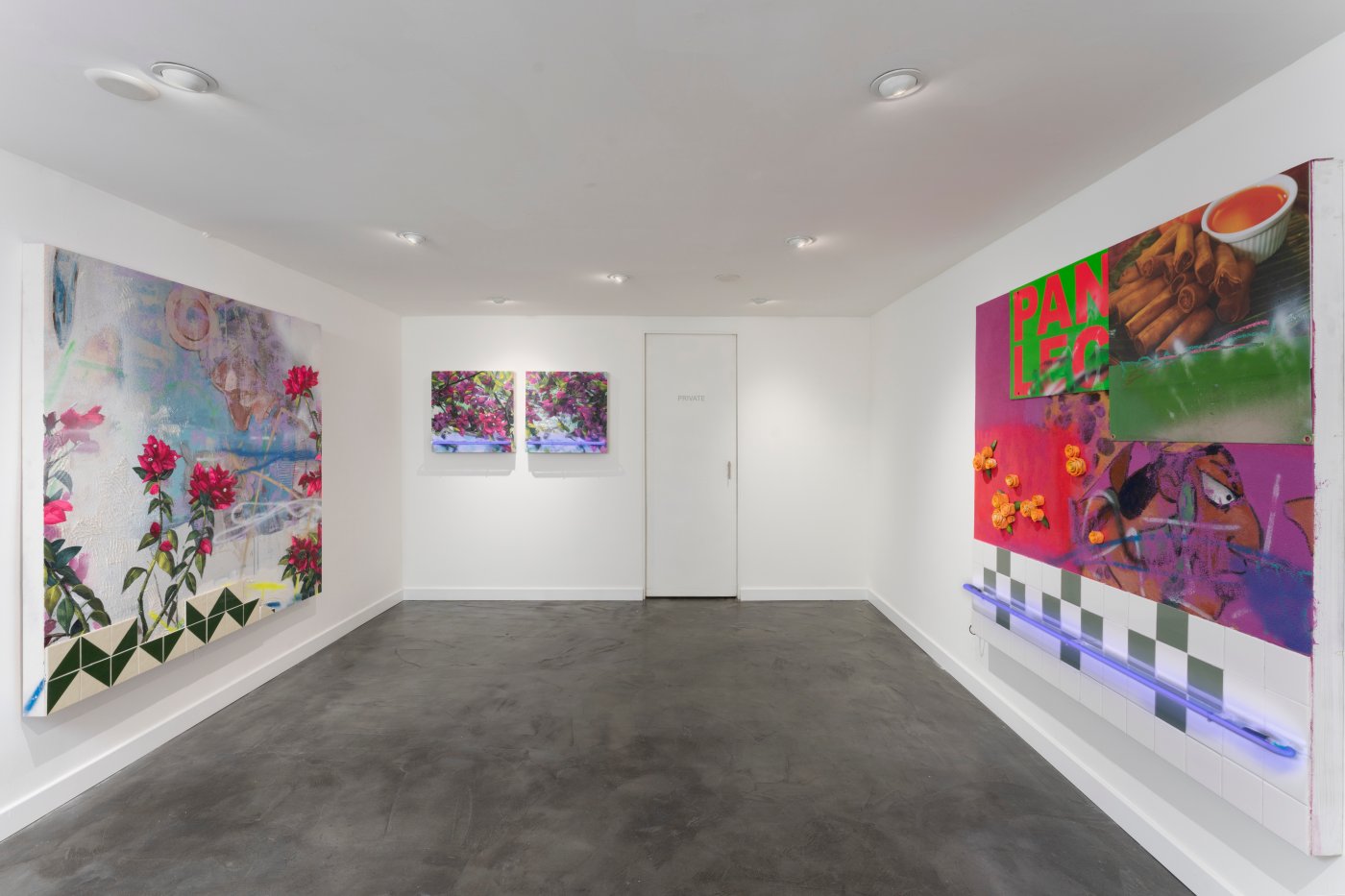 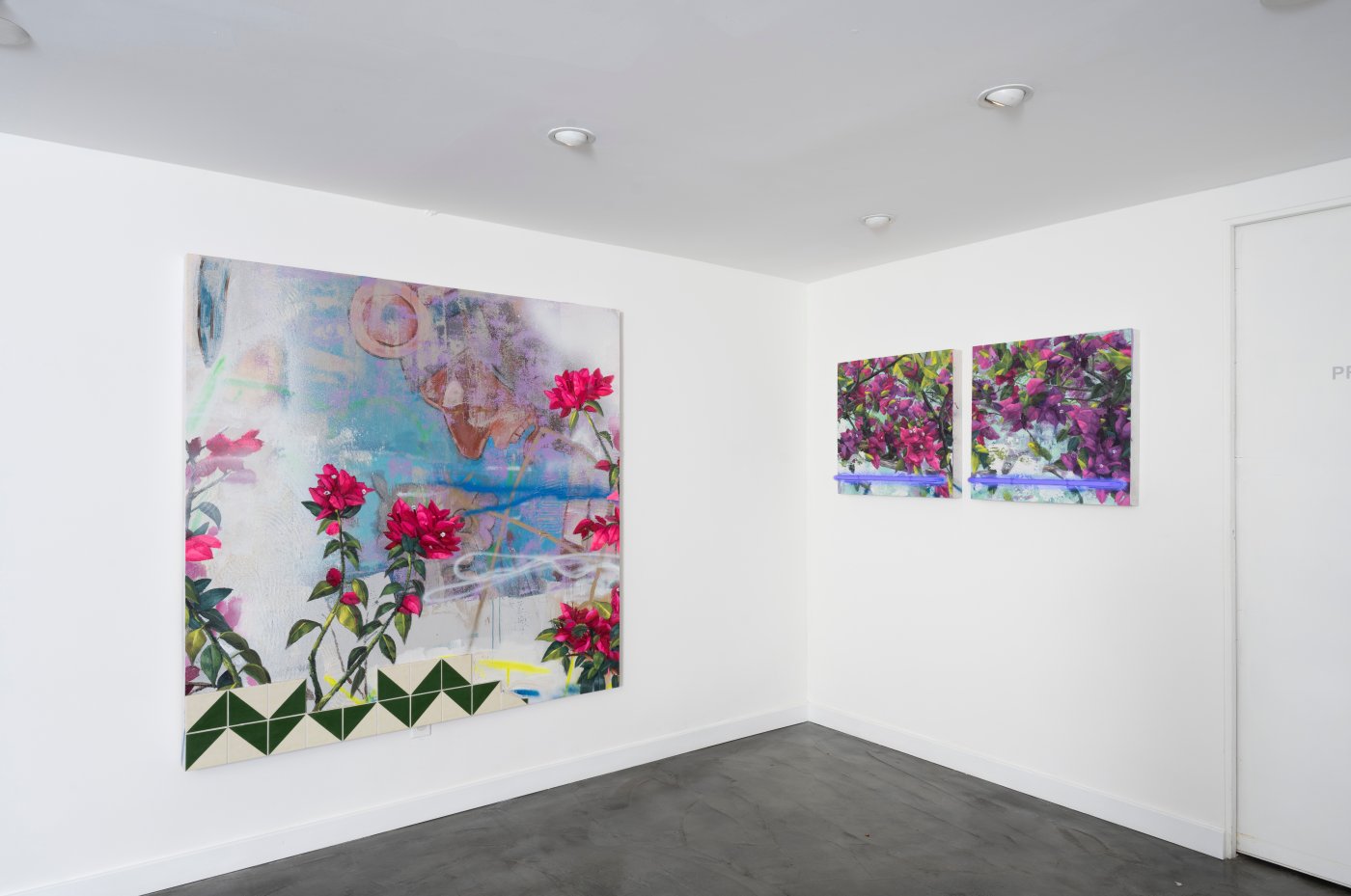 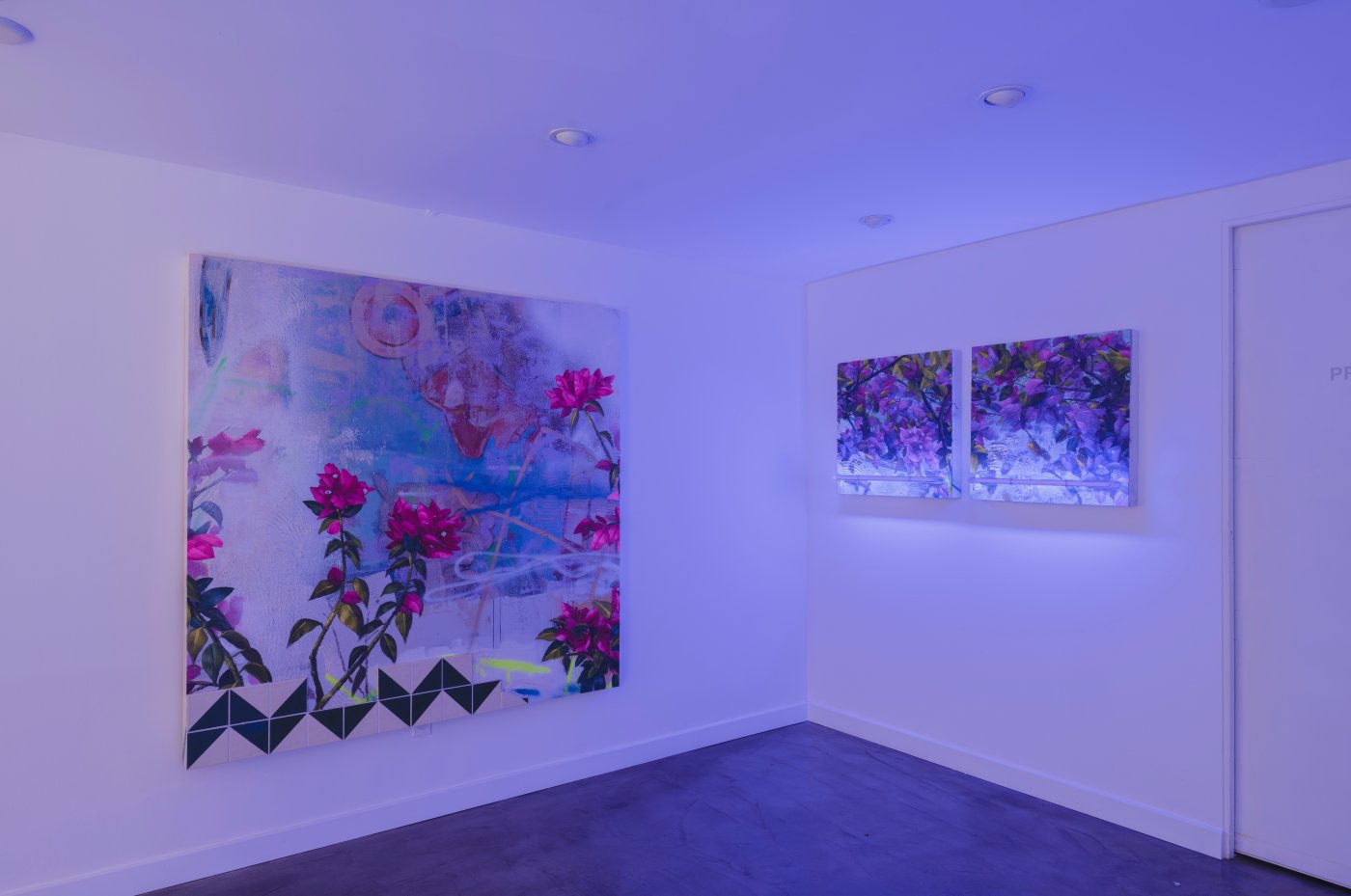 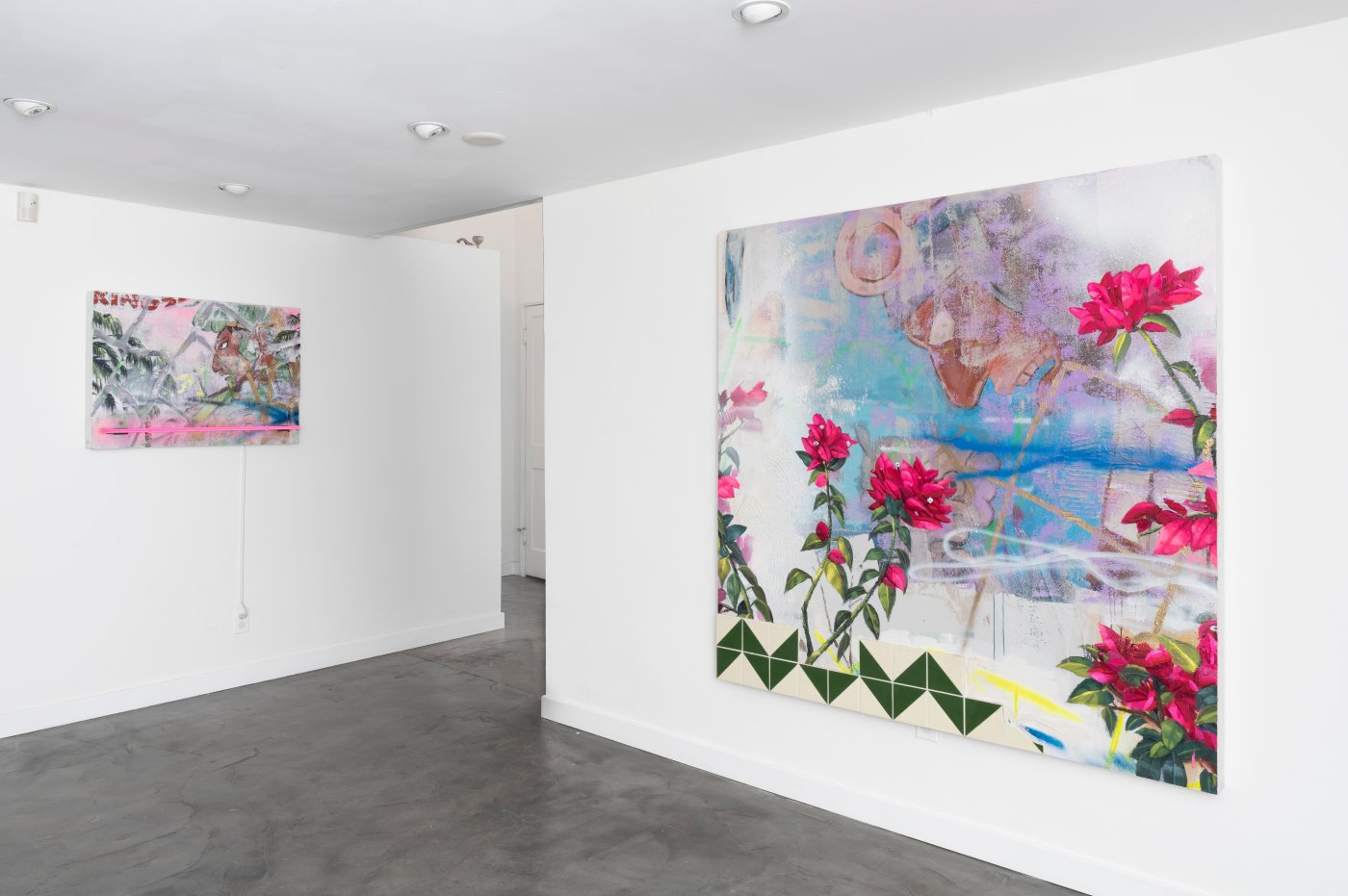 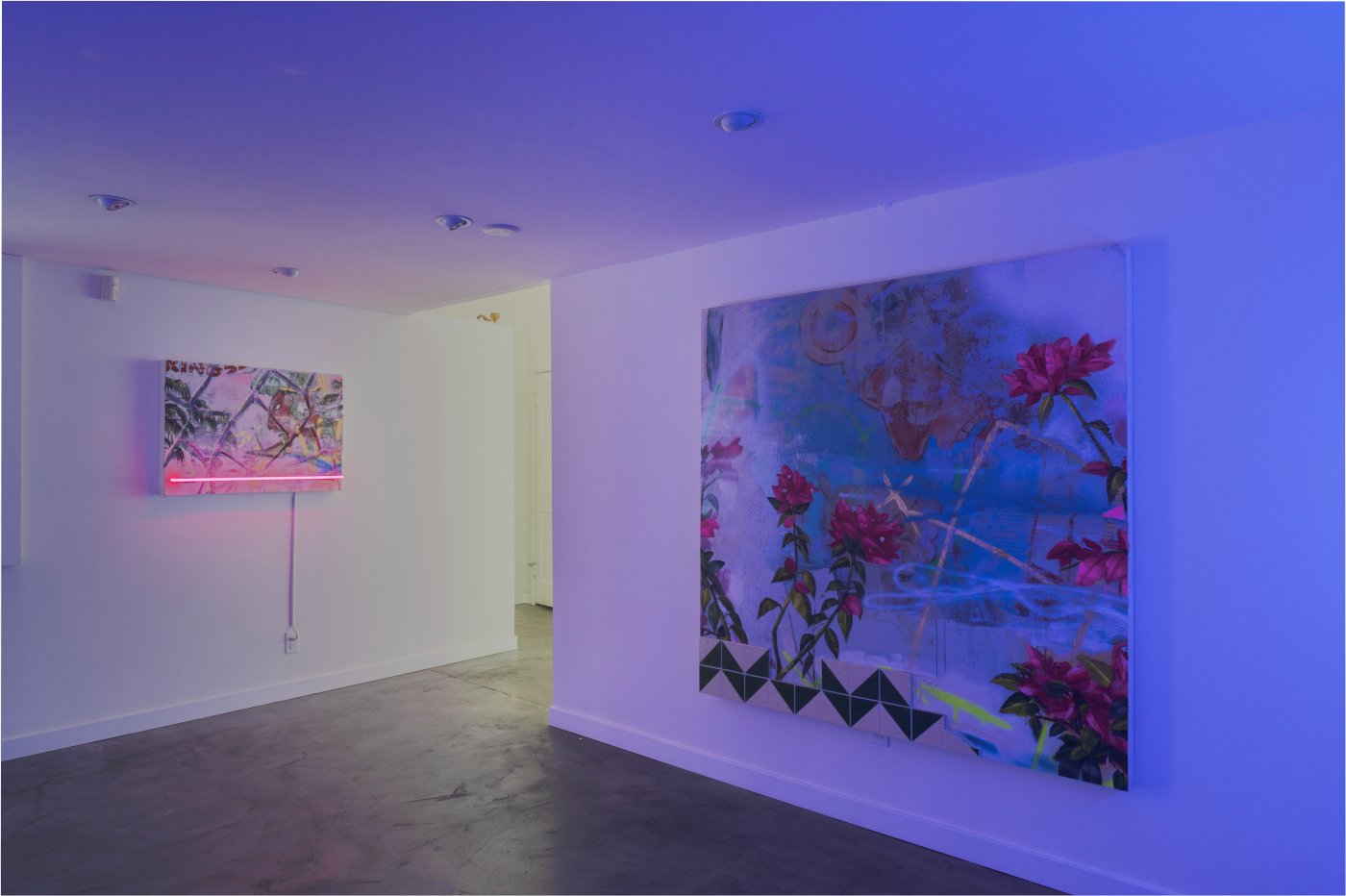 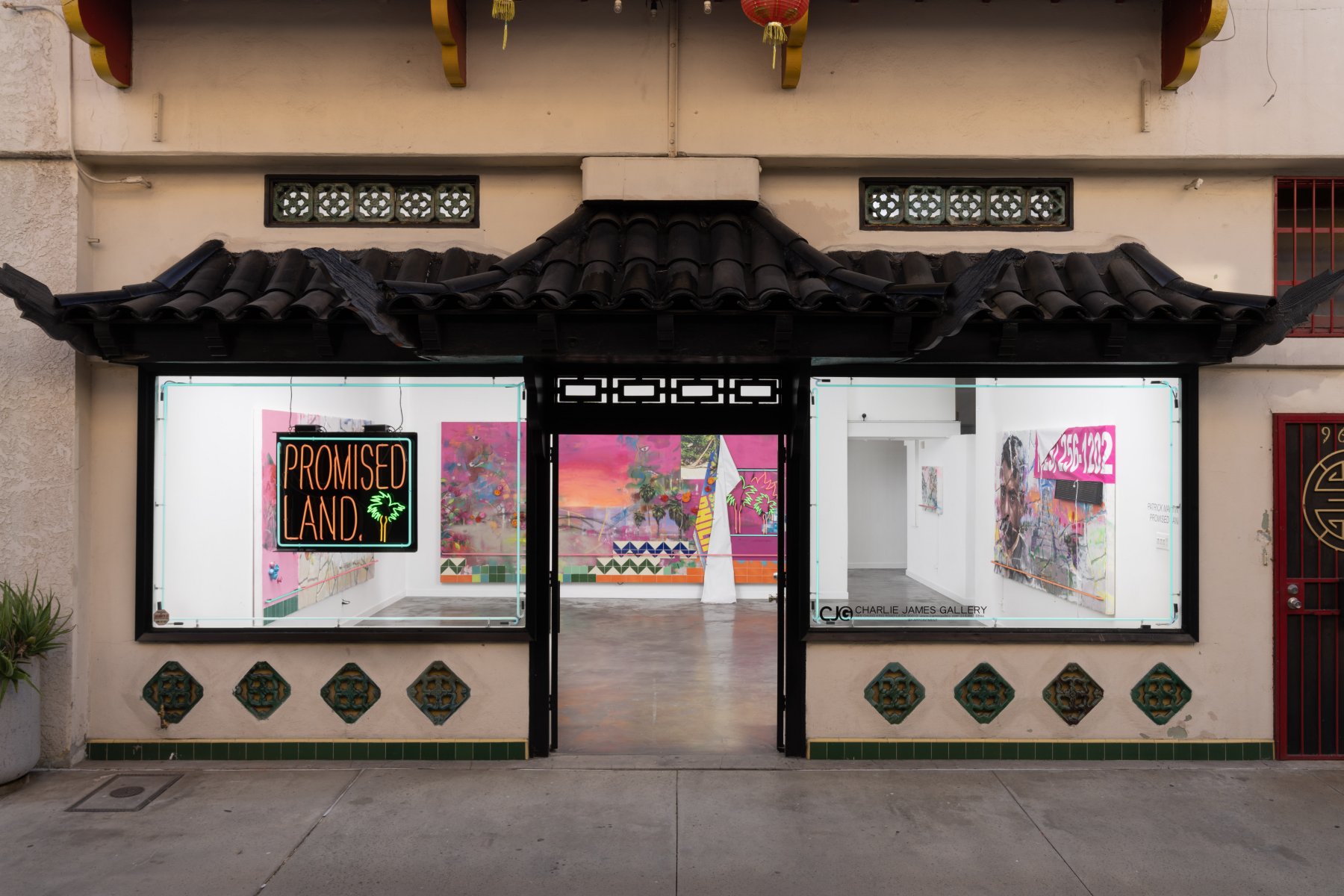 The show is populated with a prodigious array of new large-scale abstracted landscape paintings, accented by a neon on Plexiglas sign piece – the works collectively meditating on the passage of time and its impact on the lived environment, and by consequence its impact on communities of people.

This new series of paintings developed in response to the visual language of East Los Angeles, in particular the murals and surface textures adorning community centers, primary schools, and the walls of liquor stores and corner markets. Typical in Patrick’s neighborhood are murals of various kinds, many containing references to Nahua, Aztec and Maya mythological forms, and/or Mexican historical figures. Patrick has long studied and made reference to the Cacaxtla Battle Murals of central Mexico and the Bonampak Murals of Chiapas, Mexico, and references to both historical sites abound in the pieces for Promised Land. In East LA, murals are frequently executed atop building facades that utilize stone-cladding or stucco-based designs. These new paintings synthesize these East LA vernacular architectures in powerful new abstracted landscapes. Operating in a manner similar to collage, Patrick’s landscape works locate viewers in a particular geographic place, with a clear ethnic identity and suggested socio-economic position. The paintings are executed on wood panel and are painted and assembled in layers. After the application of multiple layers of paint and media, Patrick uses a pressure washer to expose the under-layer(s), resulting in the visual suggestion of aging, erosion, and the passage of time. The foundational layers of figurative paint will frequently display layers of past aerosol paint tags, buffs of those same tags which get tagged again, adding to the suggestion of surface aging and imparting a sense of narrative to the places evoked in the paintings. Atop these multi-layered surfaces Patrick adds neon forms, signature ceramic elements, and found materials such as security bars and tarp signage to complete the compositions and their sense of people and place.

The show is to be anchored by a massive 7 x 16 ft. abstracted landscape painting titled Promised Land, flanked by two large-scale paintings clad in faux stone and built up as described above, installed over the three walls in the gallery’s main chamber. The rear gallery will contain smaller works born from the same landscape series, with the addition of one new neon piece rounding out the presentation. Patrick’s neon on Plexiglas pieces are fabricated in exactly the same manner as typical street level neon signage. The neon forms are mounted to sheets of Plexiglas with transformers installed on a curved lip of Plexiglas at the top of each piece. Patrick uses words from oratorical sources, song lyrics, and of his own invention to respond to contemporary cultural and political conditions. The show, though composed of discrete paintings and neon elements, will impart the immersive experience of an installation, and will locate viewers in Patrick’s Los Angeles – in places decades old, some lost to gentrification, sites of long-standing inhabitation now fading from view.

Patrick Martinez (b. 1980, Pasadena, CA) earned his BFA with honors from Art Center College of Design in 2005. His work has been exhibited domestically and internationally in Los Angeles, Mexico City, San Francisco, Minneapolis, Miami, New York, Seoul, and the Netherlands, at venues including the Studio Museum in Harlem, the Smithsonian National Portrait Gallery, the Smithsonian NMAAHC, the Tucson Museum of Art, the Albright-Knox Art Gallery, the Columbus Museum of Art, the Vincent Price Art Museum, the Museum of Latin American Art, the Crocker Art Museum, the Rollins Art Museum, the California African American Museum, the Nerman Museum of Contemporary Art, and El Museo del Barrio, among others.

Patrick was awarded a 2020 Rauschenberg Residency on Captiva Island, FL. In the fall of 2021 Patrick was the subject of a solo museum exhibition at the Tucson Museum of Art titled Look What You Created. In 2022 Patrick was awarded a residency at the Atlantic Center for the Arts. Patrick is currently exhibiting in We The People: The Radical Notion of Democracy at the Crystal Bridges Museum of American Art thru January of 2023. In the spring of 2023 Patrick will have a solo exhibition at the Institute of Contemporary Art San Francisco. Patrick lives and works in Los Angeles, CA and is represented by Charlie James Gallery, Los Angeles.

Courtesy of the artist and Charlie James Gallery, Los Angeles