Hauser & Wirth presents an exhibition by celebrated American artist Paul McCarthy that confronts the complex mechanisms of power, politics, desire, and history. The exhibition focuses on the Los Angeles debut of new and recent large-scale ‘A&E’ drawings, an offshoot of McCarthy’s ongoing video series with German actor Lilith Stangenberg. An initialism for Adolf & Eva, Adam & Eve, and Arts & Entertainment, ‘A&E’ is a multi-disciplinary project that evolved out of the artist’s film project ‘NV Night Vater’ (2019 – ). 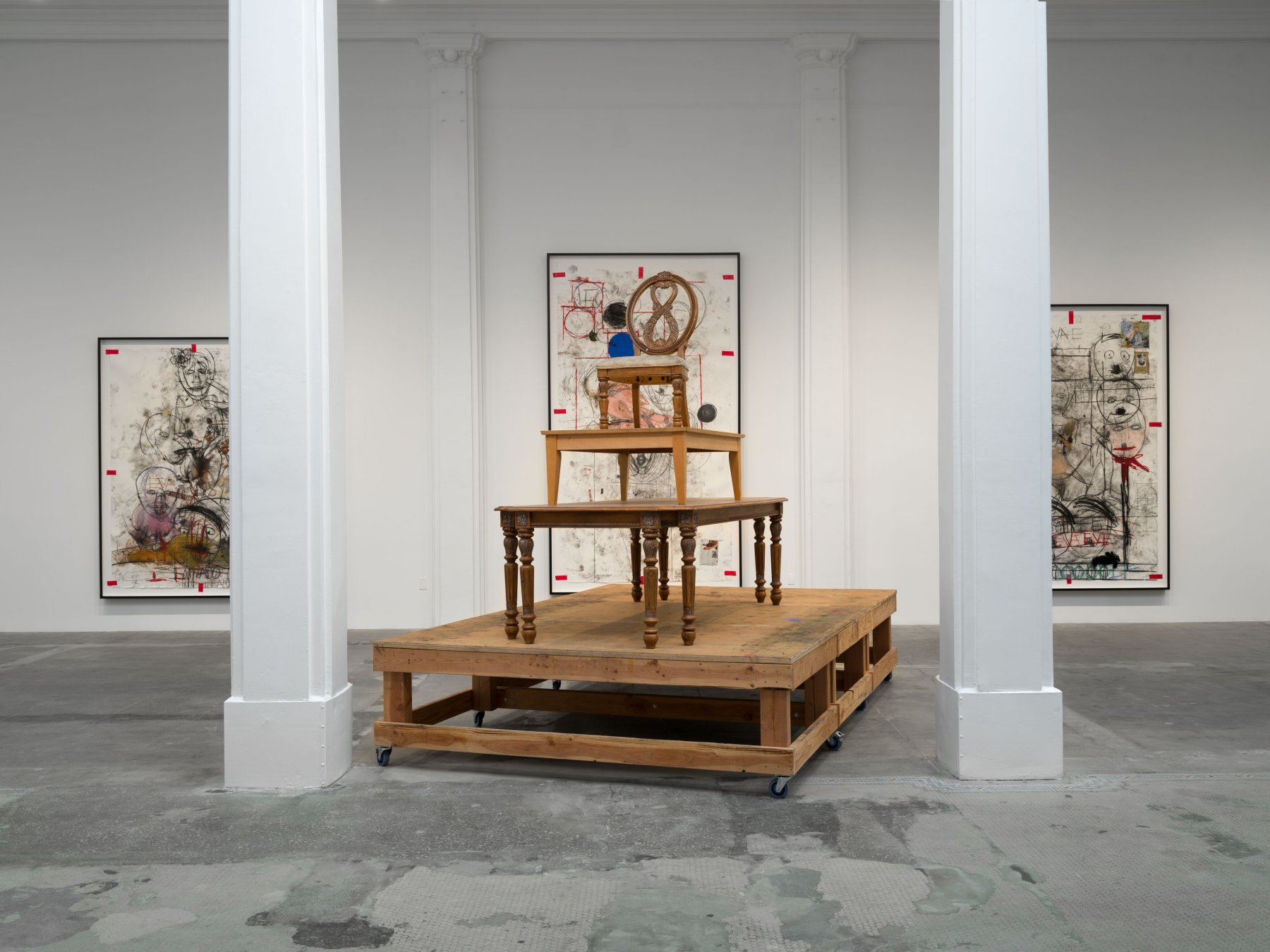 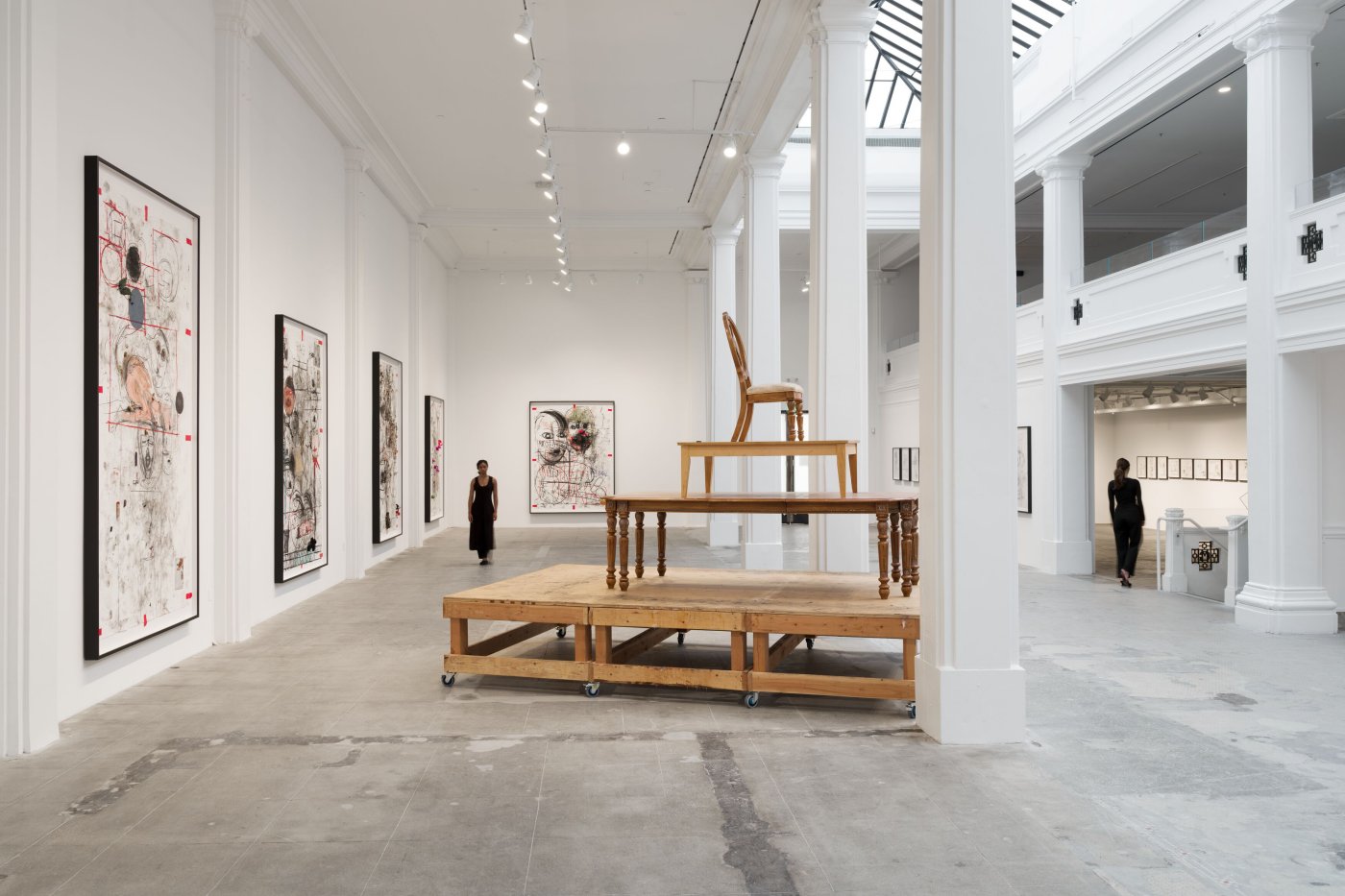 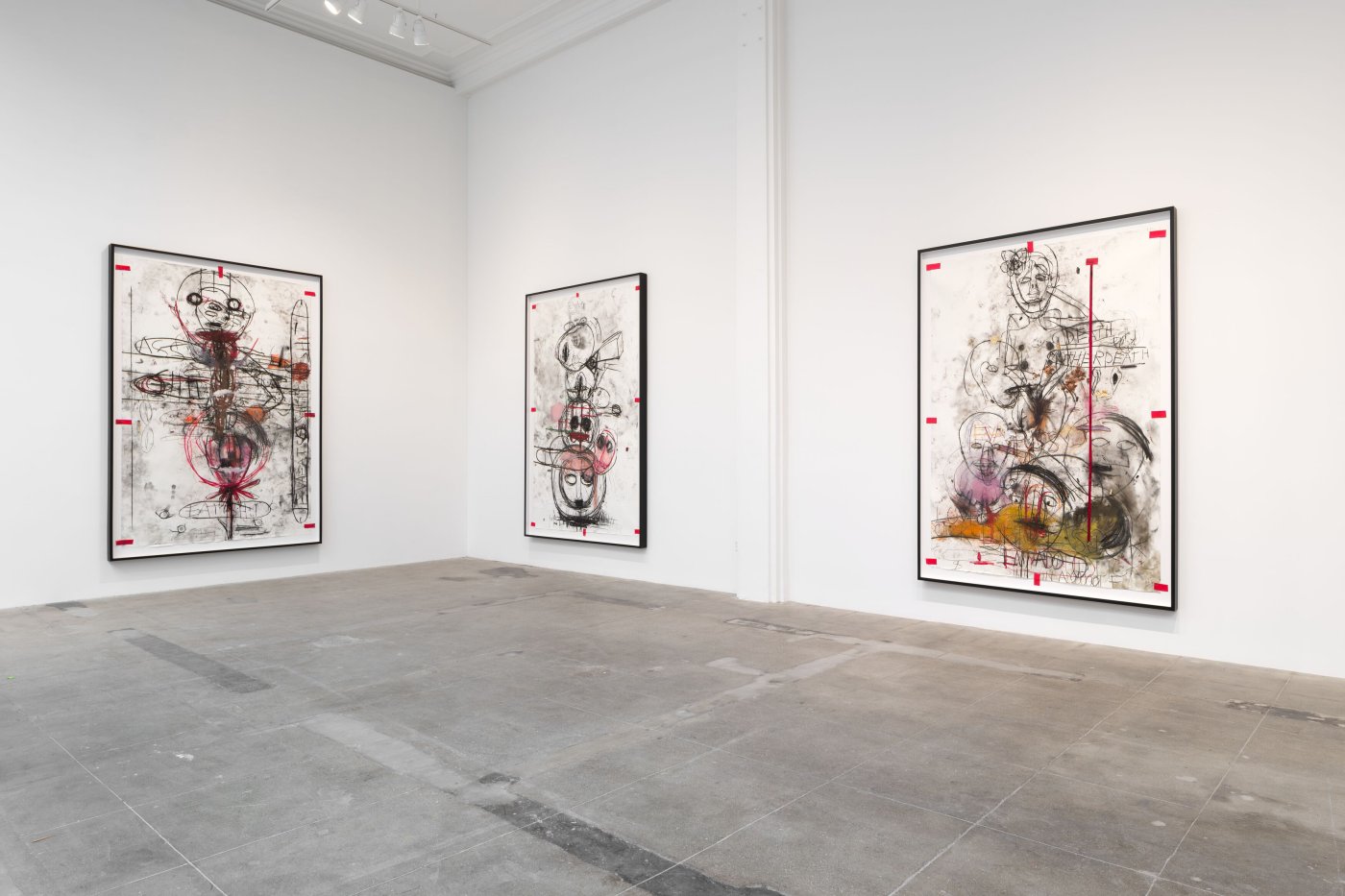 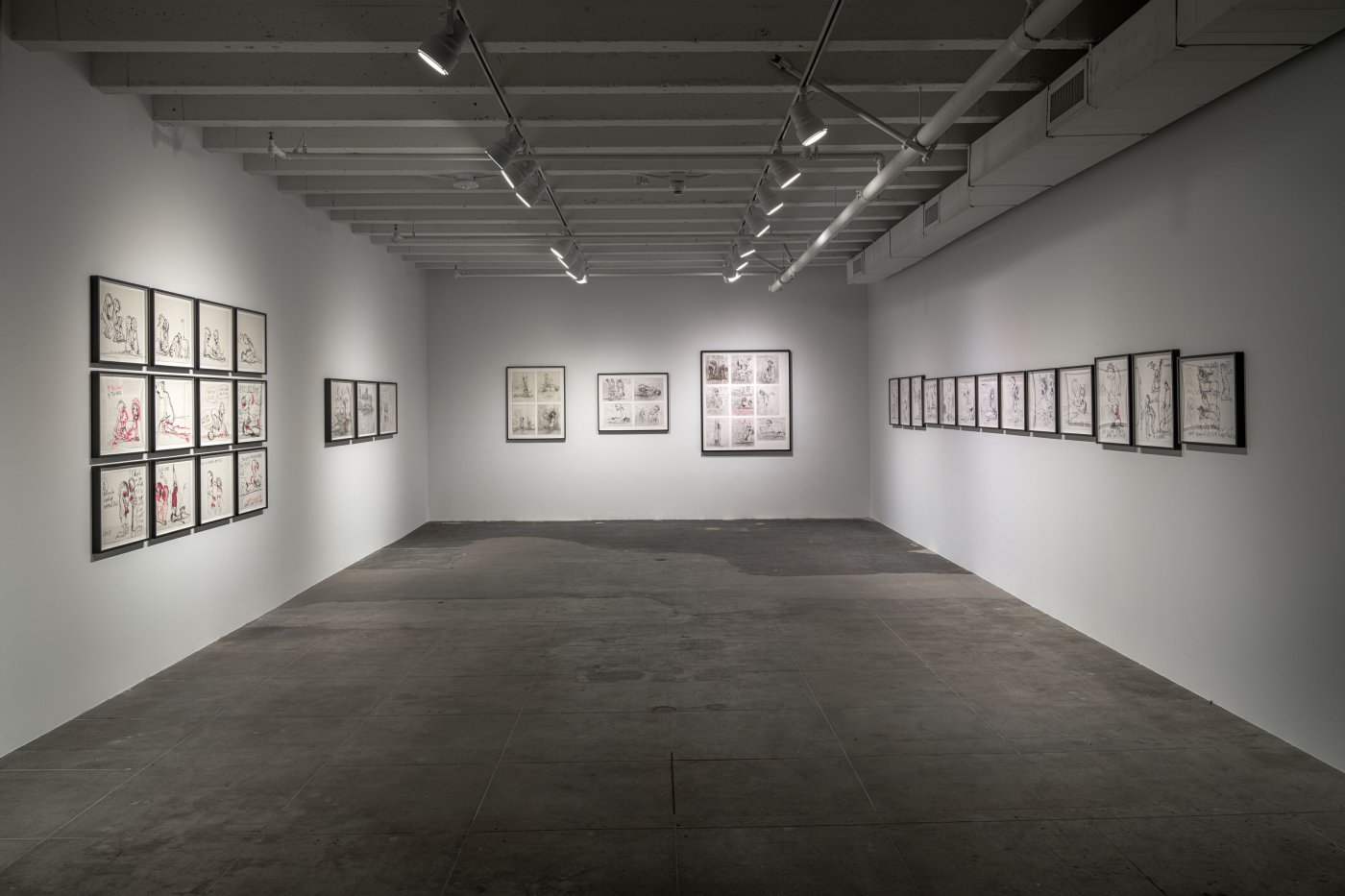 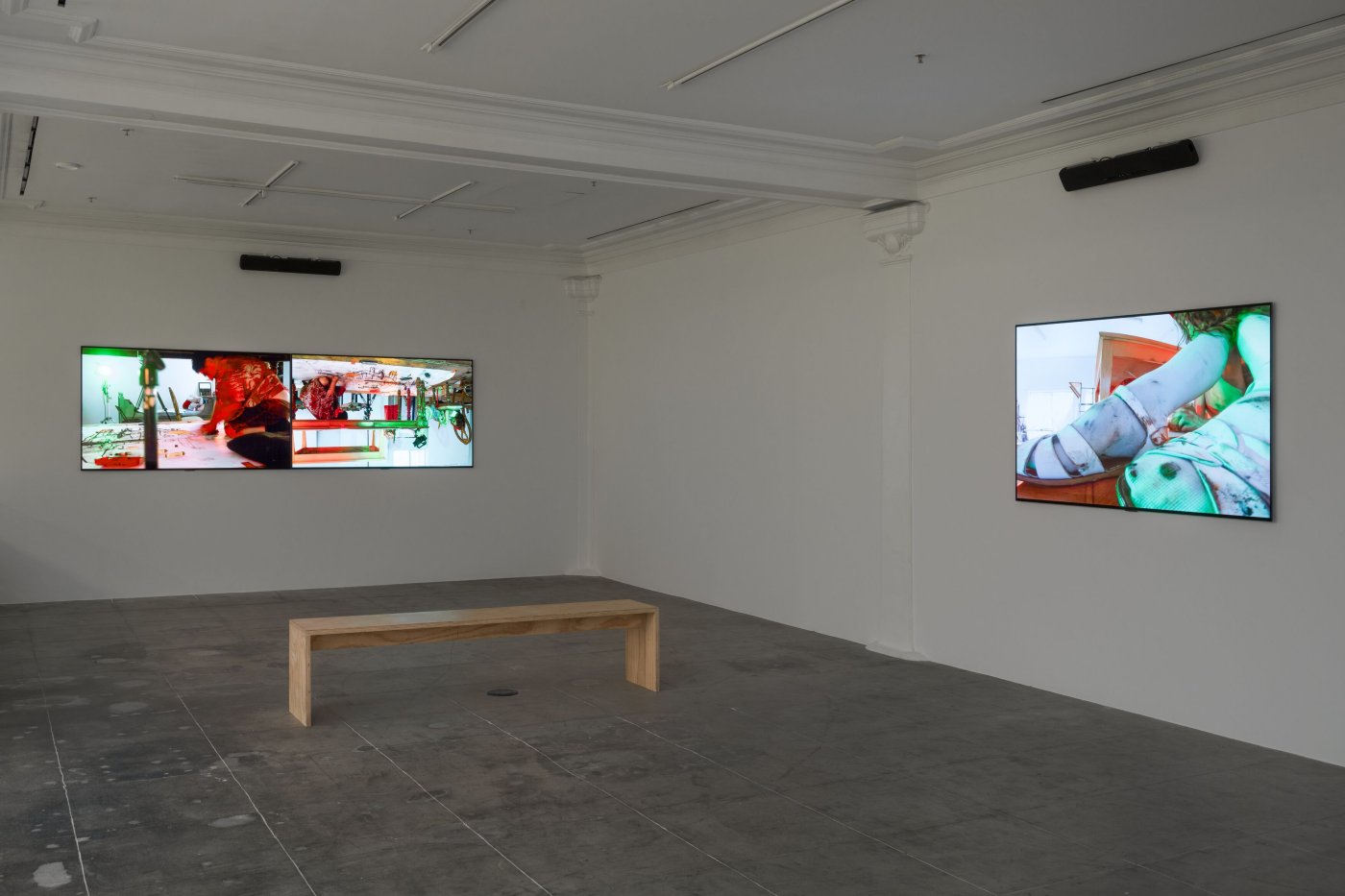 These drawings, created by McCarthy during improvised performances between himself and Stangenberg while in character as forms of Adolf and Eva, serve as documentation of both McCarthy’s incisive critical lens and his career-spanning omnivorous practice including performance, video, and drawing. The ‘A&E’ drawings will be accompanied by a video work from the drawing sessions along with the platform sculpture the drawing performances were enacted upon.

This summer, McCarthy will stage a series of performances with Stangenberg. The performances are curated by Henning Nass and include ‘A&E / ADOLF & EVA / ADAM & EVE / HAMBURG’ at Deutsches Schauspielhaus in Hamburg, Germany from 24 – 29 August 2022 and ‘NV / NIGHT VATER / VIENNA’ Volkstheater Wien in Vienna, Austria from 3 – 7 September 2022. A solo exhibition of McCarthy’s work, ‘Dead End Hole,’ was recently on view at KODE Museum in Bergen, Norway. In 2019 his works on paper were the subject of a major survey entitled ‘Head Space: Drawings 1963 – 2019’ at the Hammer Museum in Los Angeles.

i. On Paul McCarthy’s ‘A&E’ Series

‘Anyone who wants to hang a picture on the wall must first pound in a nail. To this end, one must knock.’ — Robert Walser, ‘Knocking’ (1923)

In 1966 and 1967 while still a student at the University of Utah in Salt Lake City, the city of his birth, Paul McCarthy began making large paintings on wooden panels. He painted them flat on the ground and would climb on top of them. He drew on the panels and painted them not with a brush but with a rag, using black paint. He then pounded on them, beating them with a hammer or a board, effacing the surface. In the end, he poured gasoline on the paintings and threw a match on them, burning the panels black, making flayed wreckage that looked as if it had been transposed from the war then raging in Vietnam. In 1969, all but three of these works, which came to be known as McCarthy’s ‘black paintings,’ were fully burned and buried.

These black paintings united, from the very beginning of his life as an artist, two of McCarthy’s interdependent and inextricable interests: performance and object making – action painting in a sense, but action much more like performance than Jackson Pollock or Franz Kline would have conceived. The works were instead closer to the Anthropométrie paintings that Yves Kline had begun in France at the beginning of the decade and to the earlier paintings of the Gutai group in Japan, with which McCarthy had become acquainted through Allan Kaprow’s 1966 seminal book Assemblage, Environments and Happenings. ‘At that time,’ McCarthy says, ‘I was aware of the Gutai artists, but I thought of what I was doing as making a painting as a doorway.’

In the five-plus decades since his black paintings, McCarthy has continued to combine performance and markmaking with an additional complementary element – documentation of the performances and the pieces derived from them, a process that has become more obsessive and more extensive with each production, yielding a massive accumulation of video recordings, audio recordings, and still photographs.

In 1970, McCarthy began performing as a character, a persona, a practice that continues to this day. Dressing as ‘the other’ – George Bush, an animal, a sea captain, a grandfather, a pirate, Walt Disney, Ronald Reagan, Donald Trump, Adolf Hitler. In 1991, the performances began to take place within constructed architecture, specifically theatrical sets, and would use multiple video cameras. These works became closer in production to television and feature films, combining, feeding on, and fusing the three other pursuits into a kind of obverse-perverse Hollywood gesamtkunstwerk.

Three years ago McCarthy, in collaboration with his son, Damon, shot NV Night Vater, a project reminiscent of Night Porter, the 1974 Liliana Cavani film about a sadomasochistic relationship between a former Nazi concentration camp guard and his victim. In Night Vater, shot over a 30-day period, McCarthy plays a character named Max, an aging Hollywood producer obsessed with fascism and control. Lilith Stangenberg plays Lucia, a young actress from Berlin who comes to Los Angeles to audition for a film being made by Max. The plot provided a skeletal structure for McCarthy and Stangenberg to enter through performance into a realm of psychological exclusion and masochism. At the conclusion of shooting, McCarthy and Stangenberg made a decision to go further into the subject and to film in nature, in a forest.

In outlining the meticulous approach to realizing the A&E sessions, McCarthy explains ‘At the end of Lilliana Cavani’s film Night Porter, Max and Lucia go onto a bridge knowing they will be killed, shot. A form of suicide. In Night Vater, the final scene is where Max and Lucia would also commit suicide. During the discussion of what we would do, there was the idea to commit suicide outside in the woods, in nature. That brought up Adam and Eve and the garden of Eden and from there the idea migrated to Adolf and Eva, the quintessential couple of fascism. A&E – Adolf as Adam, Eva as Eve – became the new direction, the new project. I began working on a script in 2019. Adolf & Eva and Adam & Eve, two apparent cultural contradictions you could say. In 2019 Lilith and I had done a drawing session as the characters of Max and Lucia. I made 5 large drawings on a platform pushed into the set we used for the Night Vater performance. As part of A&E, we thought we would do drawing sessions in addition to the feature or series of episodes. The first drawing session of A&E was in 2019 outside in nature, the next one was in 2020 and the last one was in 2021. Also in August 2021, we worked on the feature series of A&E for 10 days. And in November of 2021, we did another 3 days of A&E performances in Bergen, Norway. The plan is to go back into the feature in early fall of 2022 and film for 20 days. There are videos and still photographs of all of the large drawings and paintings made during these sessions. There were 30 large drawings, 7 paintings, and numerous small ones, along with what are called the script drawings, which exist in several different formats, and were done during the writing of the possible actions.’

‘I think of the A&E sessions as spinoffs looking toward the future, toward an A&E video series,’ McCarthy says. ‘The drawing and painting sessions are part of a trajectory in my work going back to the 60s, of drawing and painting as action or performance. In the drawing/painting sessions of A&E, we were ‘going into’ a realm, a world as both ourselves and as characters. The drawings were made on a big platform, a table that acted as a stage and or pedestal. Our actions were mashed together, entangled. Lilith was free to do as she wanted. I went in and out of drawing. The drawings came out of the arena we entered, ‘the other world.’

McCarthy’s recursive performance-in-character-drawing as an intentional method dates back as far as 1981, when he performed as a sea captain in Death Ship at the Artemisia Gallery in Chicago and again in 1982, when he created five large-scale drawings at the Exile Gallery in Los Angeles based on small drawings from a 1975 performance and video, Sailor’s Meat, Sailor’s Delight. During the 1982 re-drawing sessions on the gallery floor, McCarthy recalls, ‘I was talking constantly as I was drawing – it was an action. I was by myself. The drawing action went on for several days.’

Two years later, in the character of a shambolic procreating infant, he continued the process with Baby World, creating a massively scaled drawing, again on the floor, at the Edge Gallery in Fullerton, California, a progression of meshing genres that continued and broadened for many years, through the major multidisciplinary works The Pirate Project in 2001 and White Snow in 2013. ‘I did drawings for those two projects in the studio on a big table, getting on the table on top of the drawings and drawing, constantly talking and gesturing,’ McCarthy says. ‘During the making of the series of drawings for Caribbean Pirates, I’m in the form of an imaginary pirate, Paul the pirate. In the series of drawings for White Snow I’m Walt Disney, or Walt Paul. But it is tricky to talk about. I’m not interested in trying to be an accurate representation of Walt Disney or a pirate. I’m adopting some form of the character. It is a process, a way of canceling out aspects of myself and finding new ones while drawing. Possibly at the core of it is the processing of images within sub-desire. You could say it’s a way of blocking out ‘Paul’s’ rational critical thought.” [As the philosopher Gilles Deleuze, whose thinking has been pivotal in McCarthy’s work, wrote: ‘It is not the slumber of reason that engenders monsters but vigilant and insomniac rationality.’]

The often-collaborative nature of such works can be traced back even earlier in McCarthy’s development, to his time at the San Francisco Art Institute, where he earned a bachelor’s degree in painting in 1969 after leaving Utah. ‘San Francisco was a political environment – the forming of collectives, groups, communes, the questioning of hierarchy and patriarchy and the belief in art as life were all part of the time; it was part of my foundation.’

‘There always seems to be a looping, a circling back into the subject again and again,’ McCarthy says of all the work he has done since those days. ‘There are drawings I’ve made now from the photographs and video recordings of the A&E drawing sessions that Lilith and I did.’ Performance intertwined with drawing and painting, then further intertwined with documentation and filmmaking that leads back to drawing and painting, forms an obsessive mis-en-abyme layering of work that becomes performative in itself. ‘In the 70s there might have been a few dozen images and one or two half-hour or hour-long videos of a performance. Now there can be more than 150,000 images of one project and terabytes of video recordings. It’s like I’m piling imagery on top of imagery. It’s accumulation on top of accumulation. Most of it will never be seen. It’s a wormhole. A pleasure tunnel with no light at the end.’