Flowers Gallery is pleased to present new works by Scottish artist Peter Howson. The exhibition of apocalyptic paintings and drawings takes its title from the mythical river Phlegethon, also known as the ‘river of fire’, which featured notably as a site of punishment in Dante’s Divine Comedy. 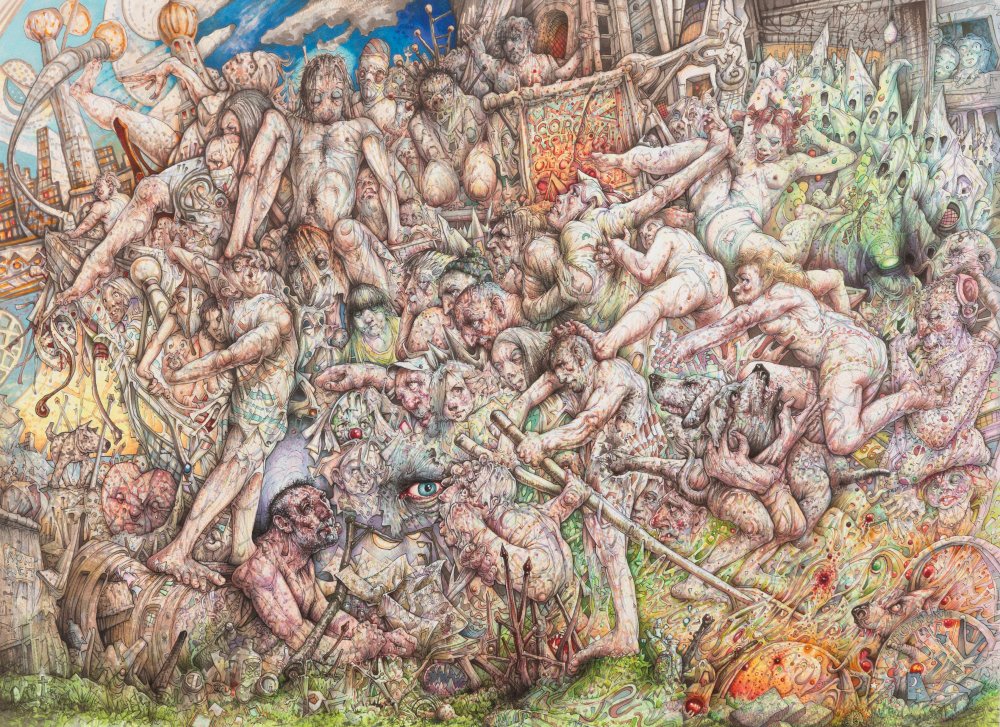 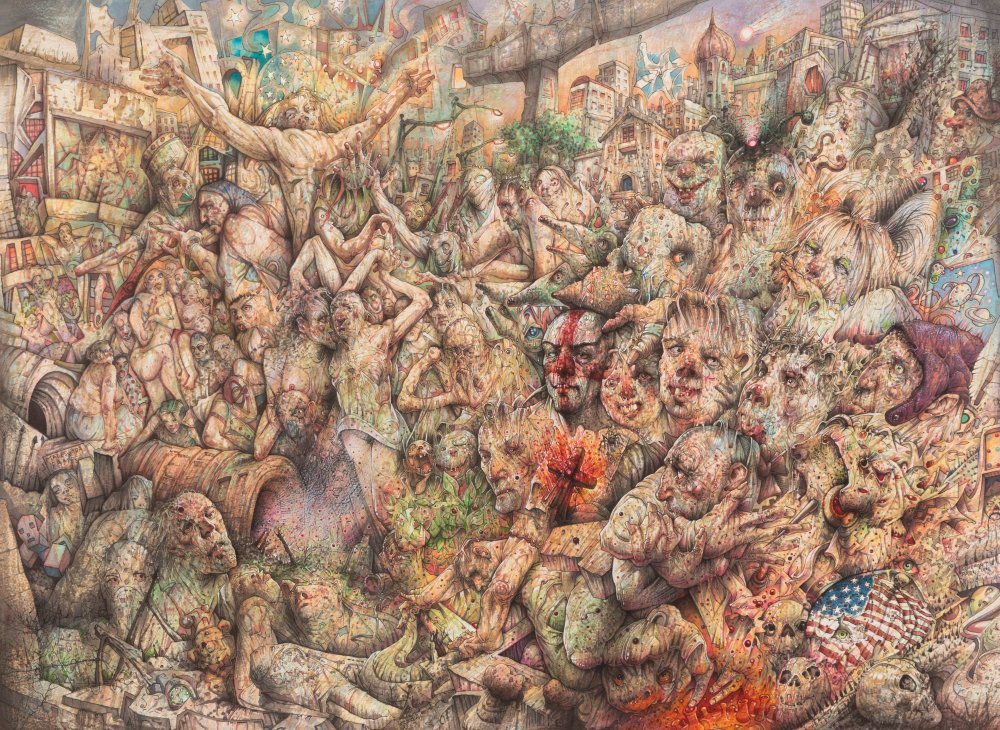 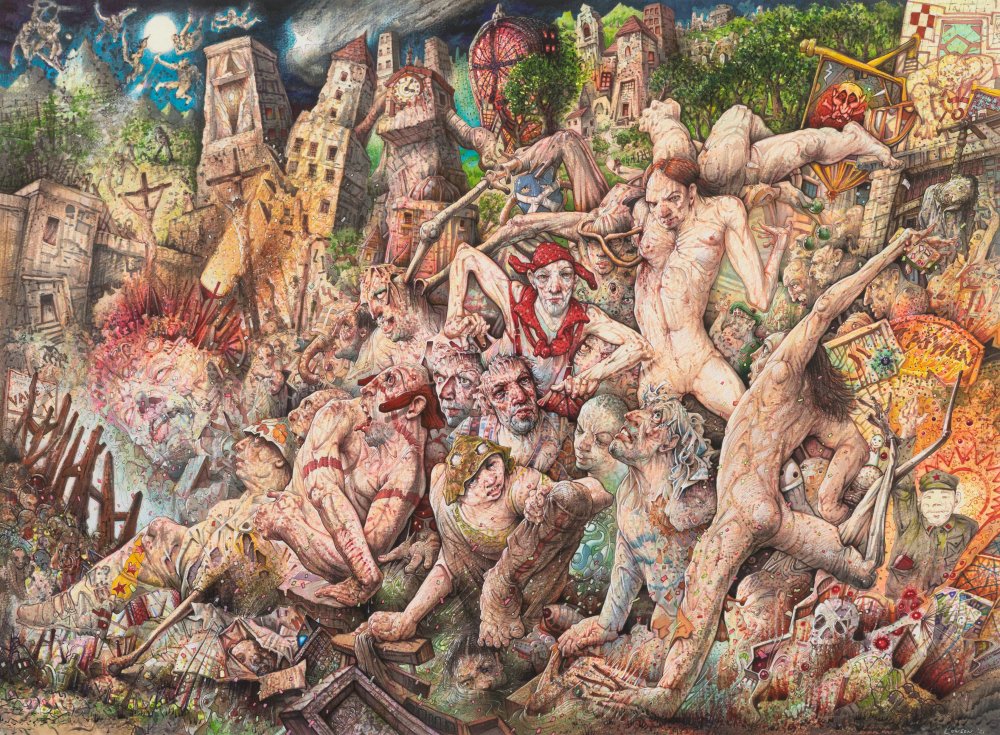 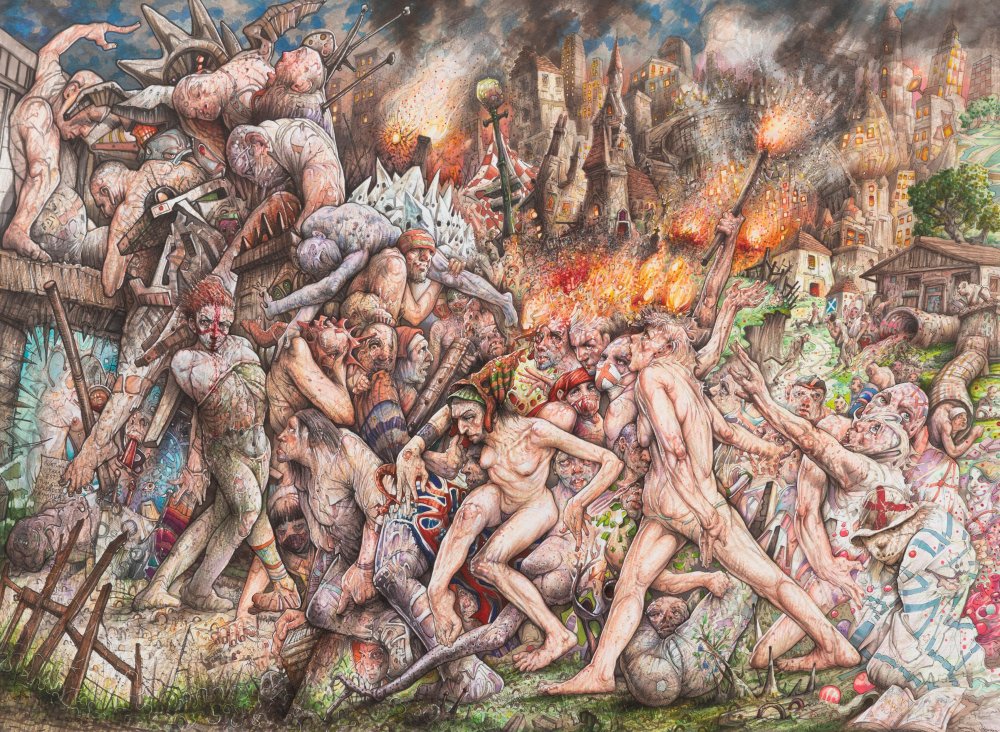 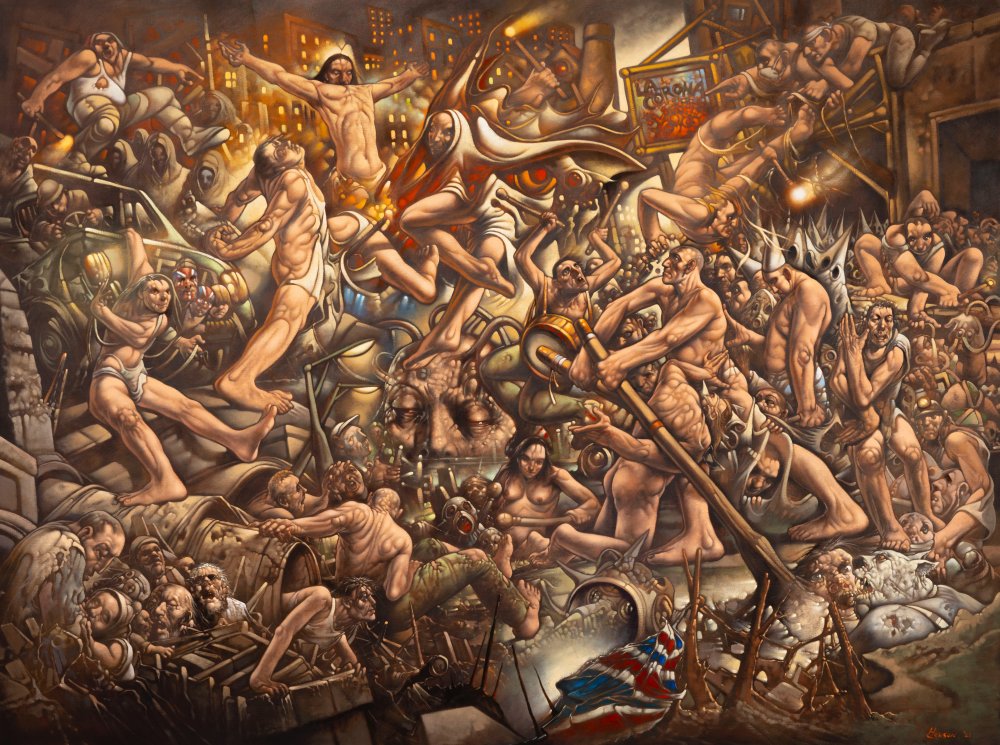 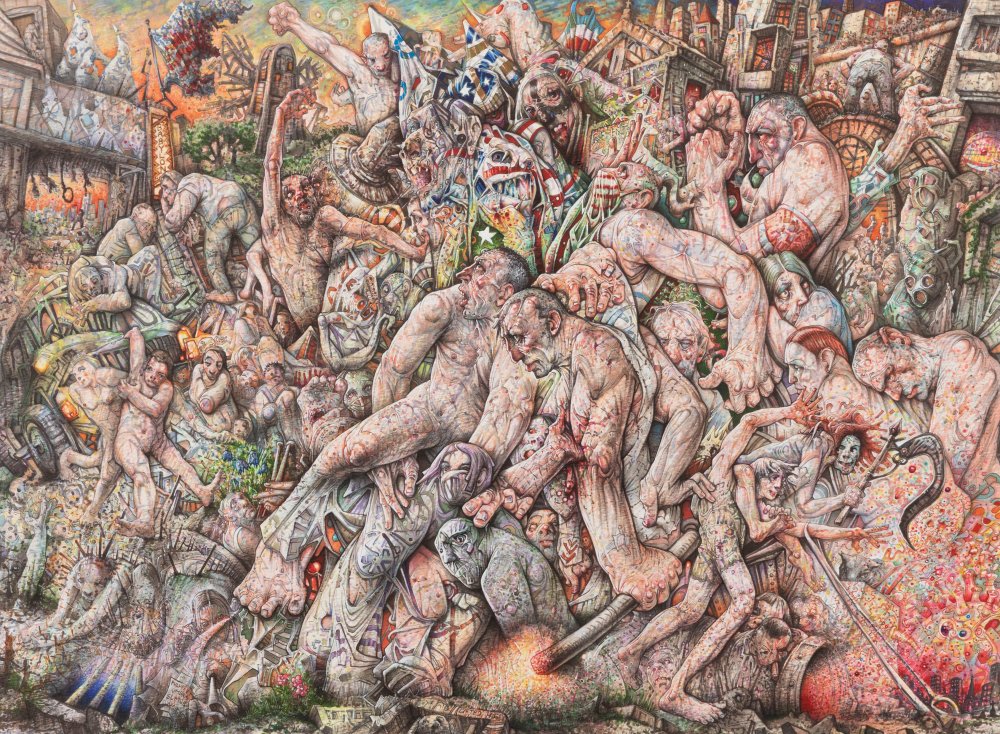 Peter Howson
Pulvis et Umbra Sumus (We are Ashes and a Shadow), 2021 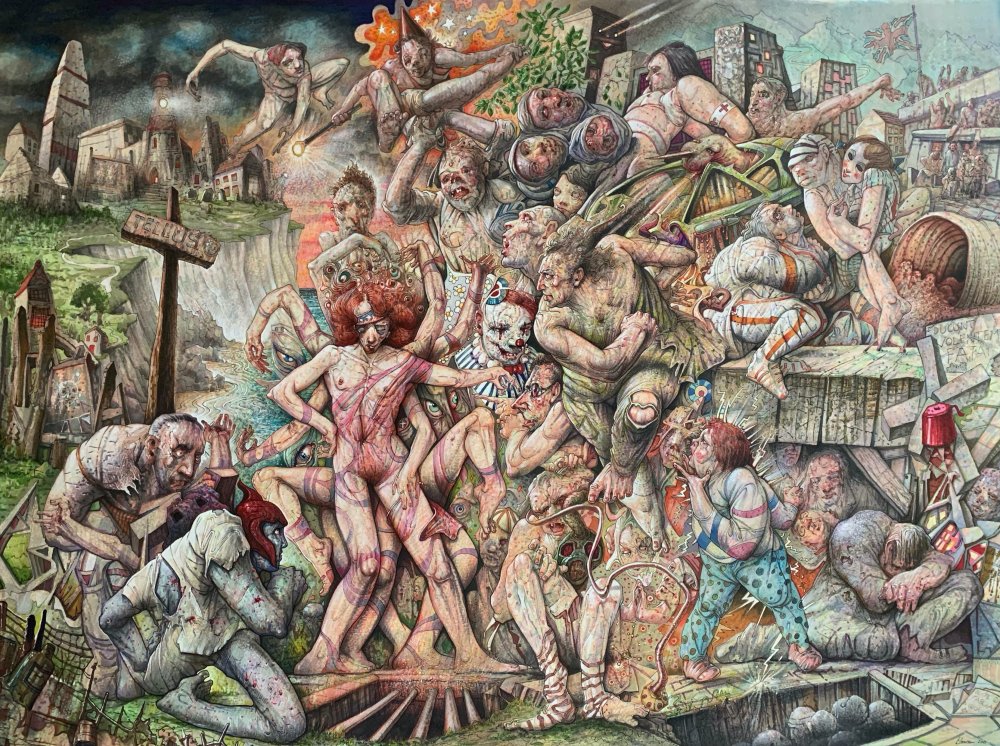 Peter Howson
Ride Si Sapais (Laugh If You Are Wise), 2021 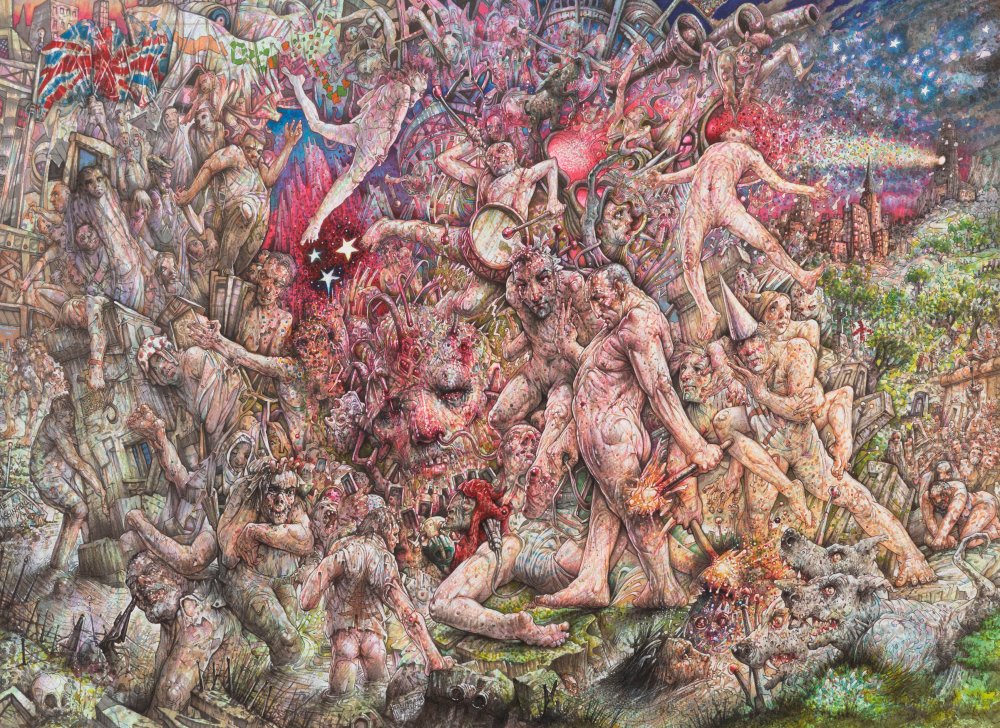 Peter Howson
Vox Et Praeterea Nihil (A Voice and Nothing Besides), 2021 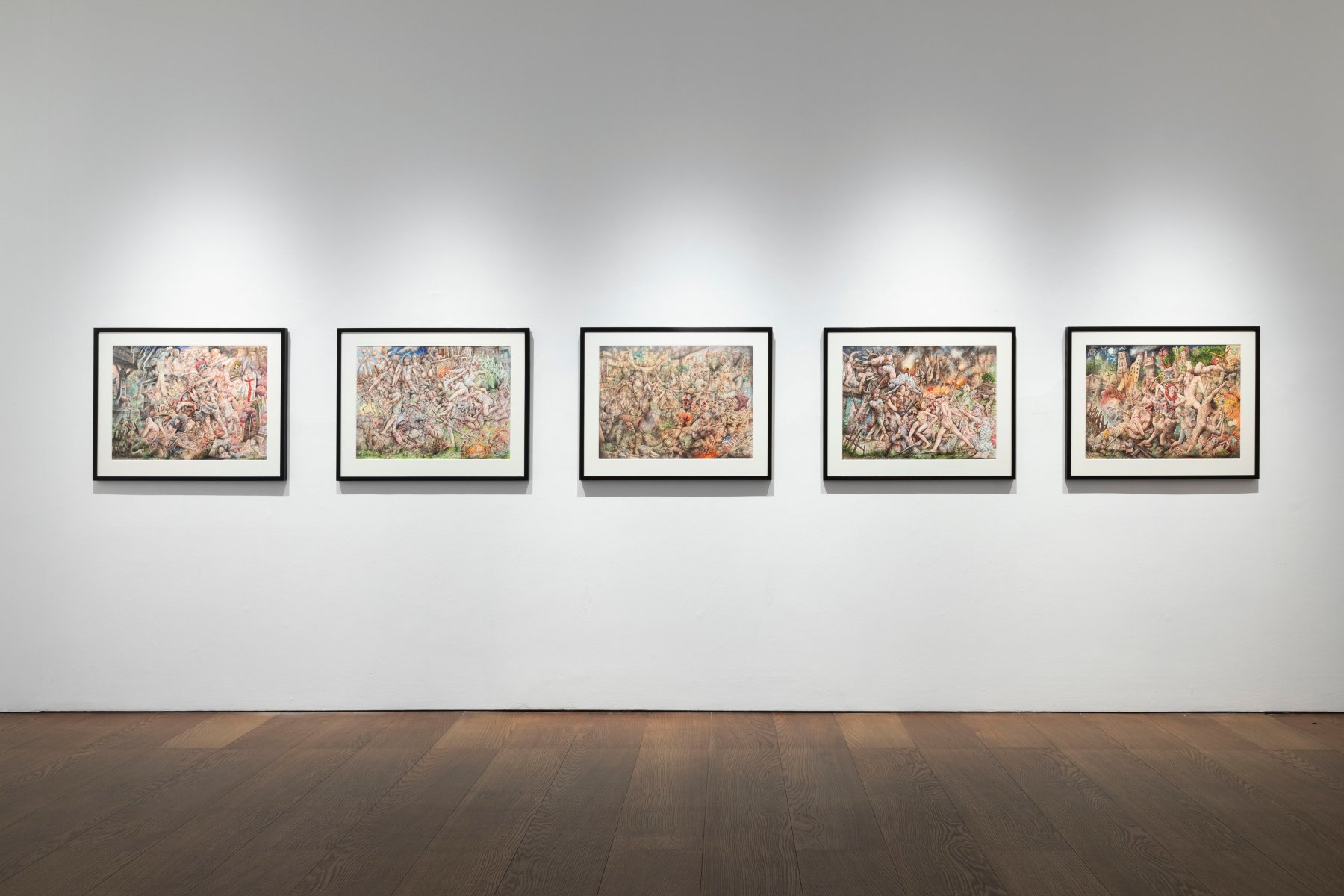 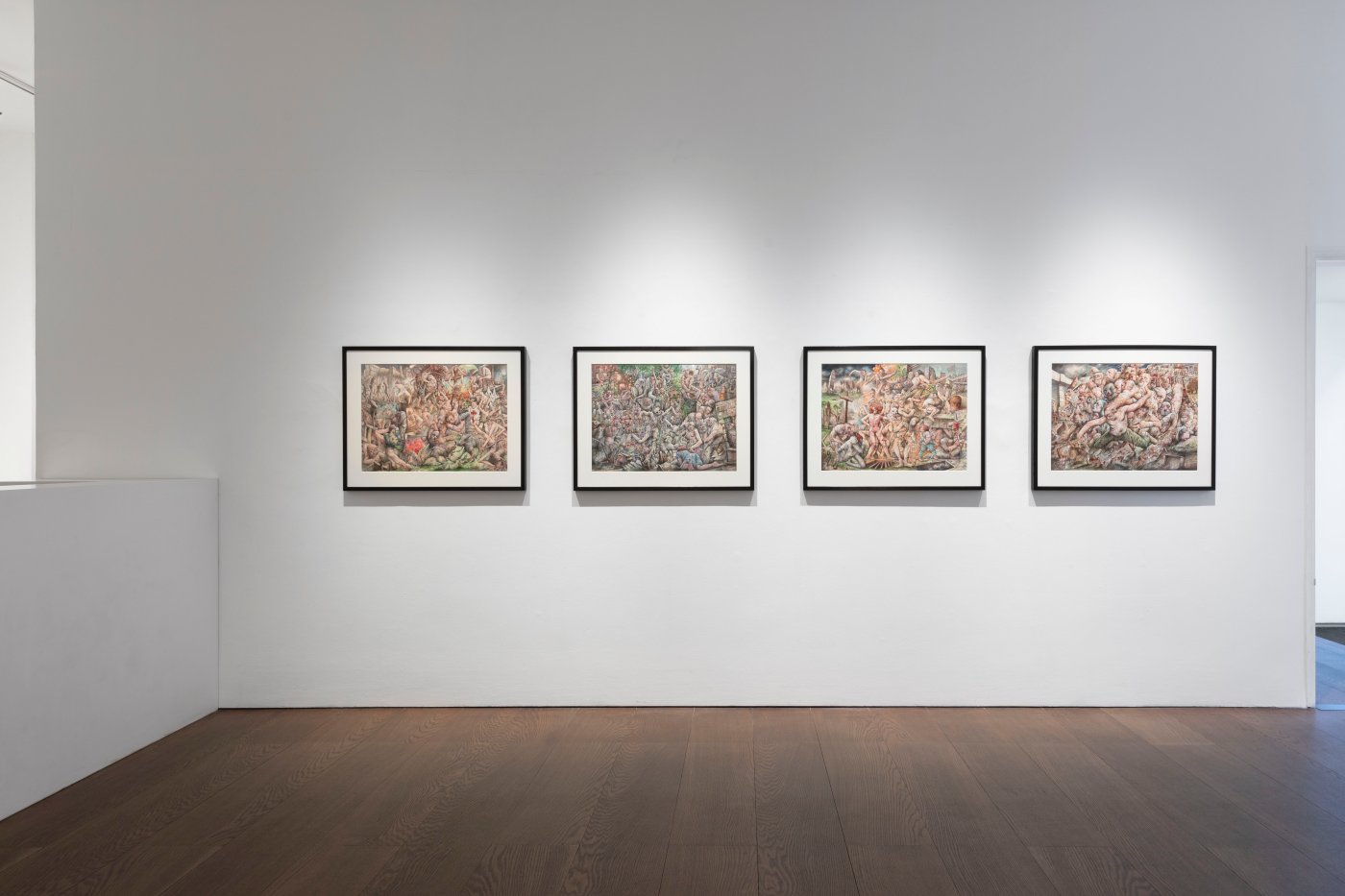 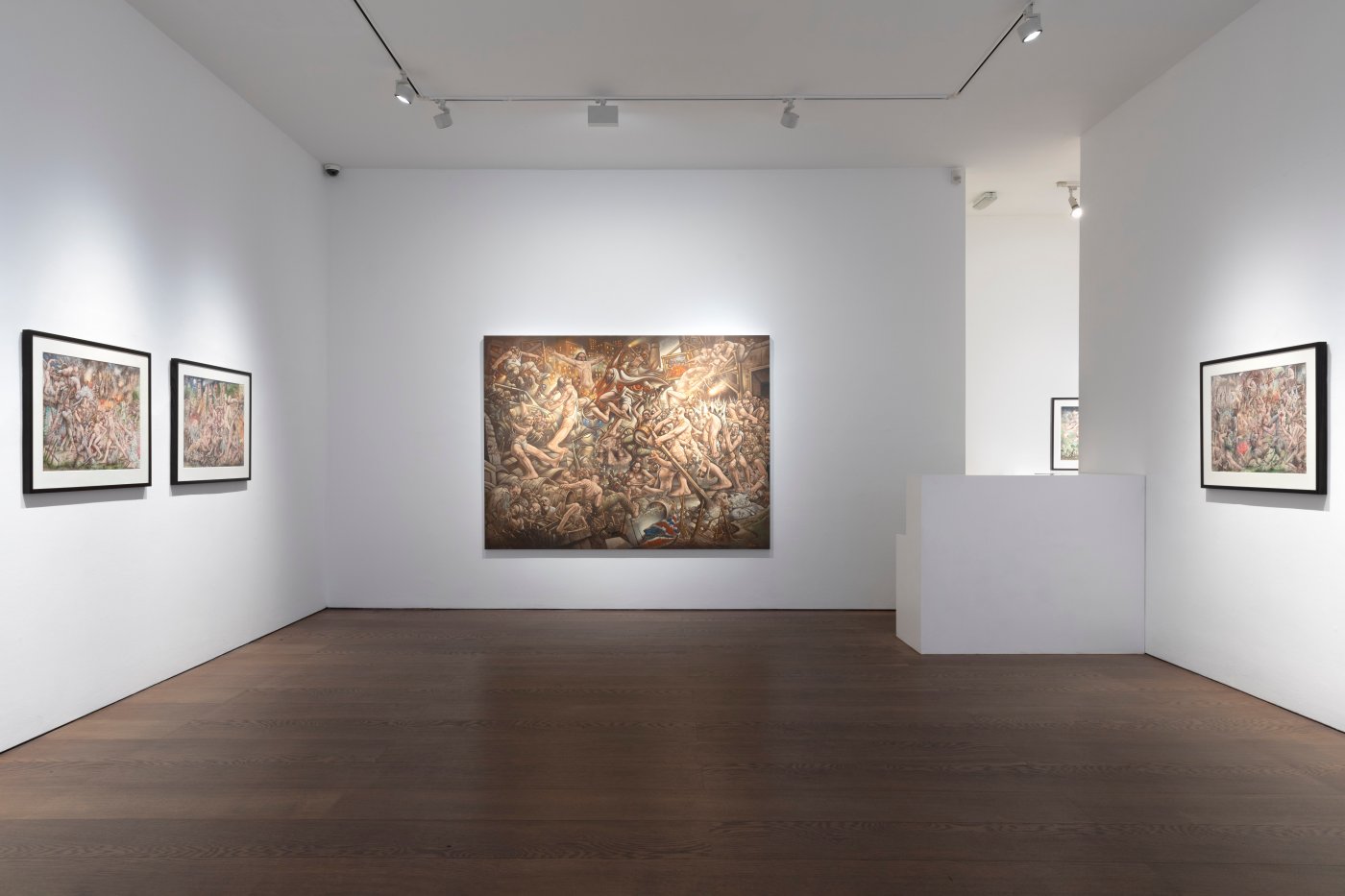 Throughout his career, Howson has tackled the subject of human conflict and destruction, both in his role as a former official war artist, and in his observations of everyday struggles.

In this exhibition, Howson explores themes of prophecy, suffering and redemption, aligning his harrowing vision of contemporary crisis with a collision of references stemming from medieval literature, Renaissance poetry and 20th century science fiction.

Howson’s epic scenes seethe with figures, often linked together by wire-like tendrils entangling the turbulent mass of limbs. Amongst narrative allusions to political events of our times, suggested by images of national flags, angry mobs, war and technology, Howson introduces symbolic motifs to address enduring questions of faith and spirituality. Texts engraved in pub signs and placards often provide wayfinders to navigate the images, such as the reference to John Donne’s Holy Sonnets embedded in the sign ‘La Corona’ or the memento mori message of ‘The Passing Bell’, suggesting a meditation on mortality and impermanence.

Peter Howson was born in London in 1958. Howson was a focal member of the group of young artists to emerge from the Glasgow School of Art during the 1980s dubbed the New Glasgow Boys, and one of his generation’s leading figurative painters. He studied at Glasgow School of Art from 1975 – 1977, and returned in 1979 to complete a Masters degree. In 1985 he was the Artist in Residence at the University of St Andrews and also a part-time tutor at Glasgow School of Art. Howson witnessed the harrowing realities of combat as an official war artist appointed by the Imperial War Museum during the Bosnian War from 1993-4, culminating in a solo exhibition at IWM London in 1994. In 1996 he was awarded Doctor of Letters Honoras Causa, University of Strathclyde. Howson has exhibited extensively in the United States and Europe. His work is represented in public collections including the Metropolitan Museum of Art, NY; Museum of Modern Art, NewYork;Tate, London; theVictoria & Albert Museum, London; the British Museum, London; Gallery of Modern Art, Glasgow; LYC Collection, Guangzhao, China; and the Scottish National Gallery of Modern Art, Edinburgh. His work was the subject of a feature documentary film Prophecy by director Charlie Paul in 2019.