Phoebe Collings-James’ (b. 1987, London, UK) wide-ranging practice encompasses sculpture, video, sound and performance. For her first solo exhibition in a UK institution, she has created a sensual environment combining sound and sculpture that unfolds from undercurrents of grief, heartbreak and desire. 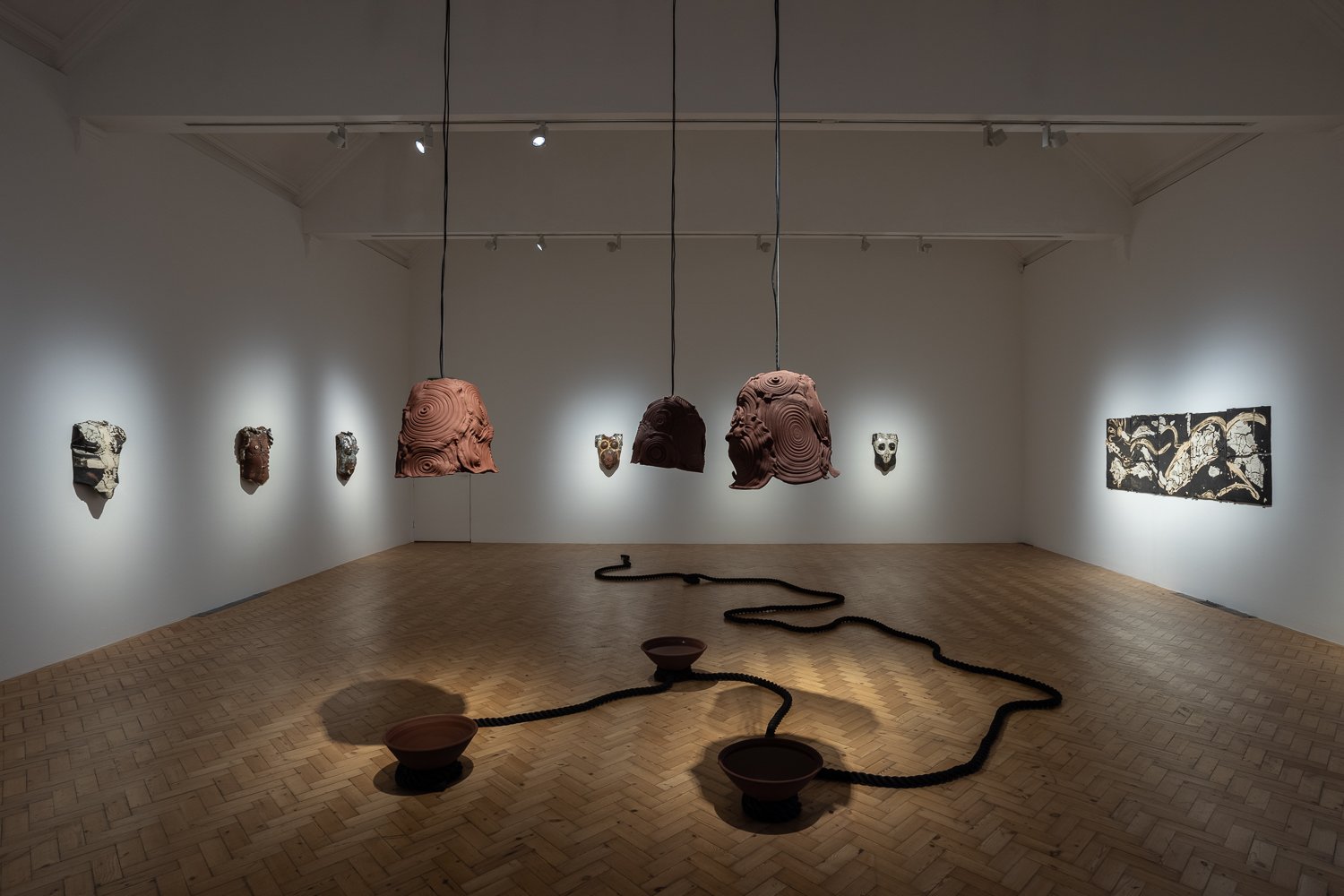 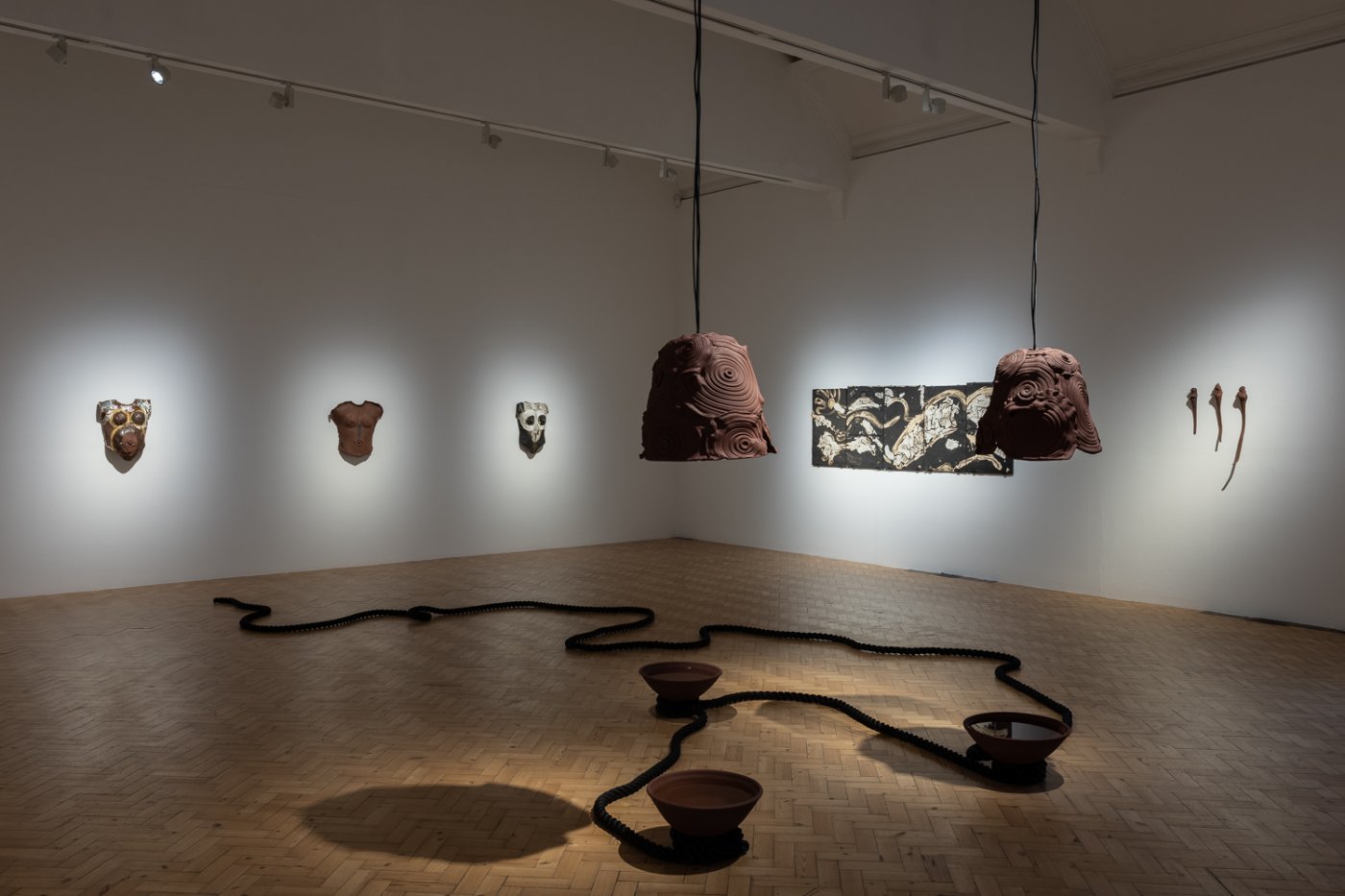 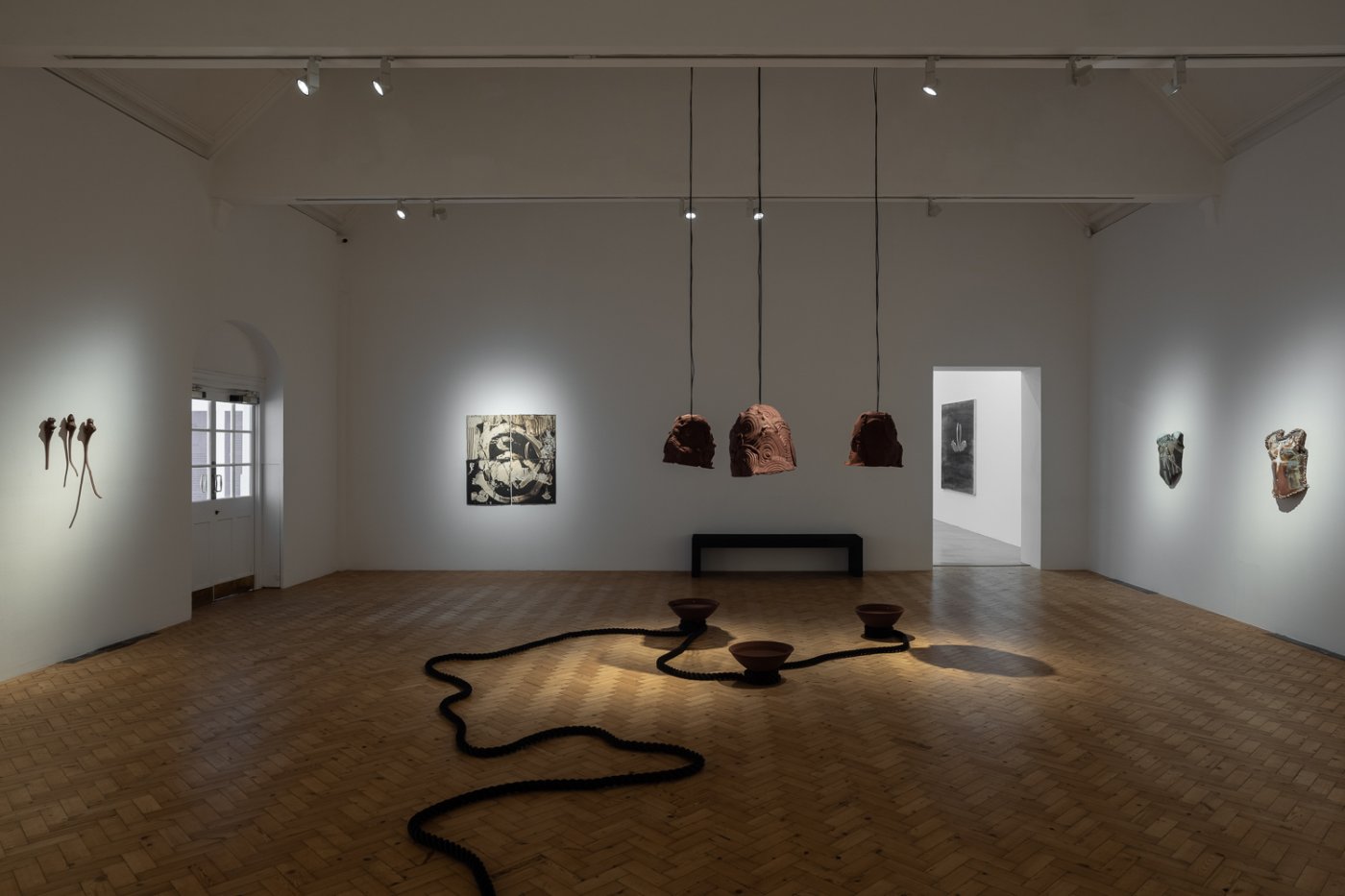 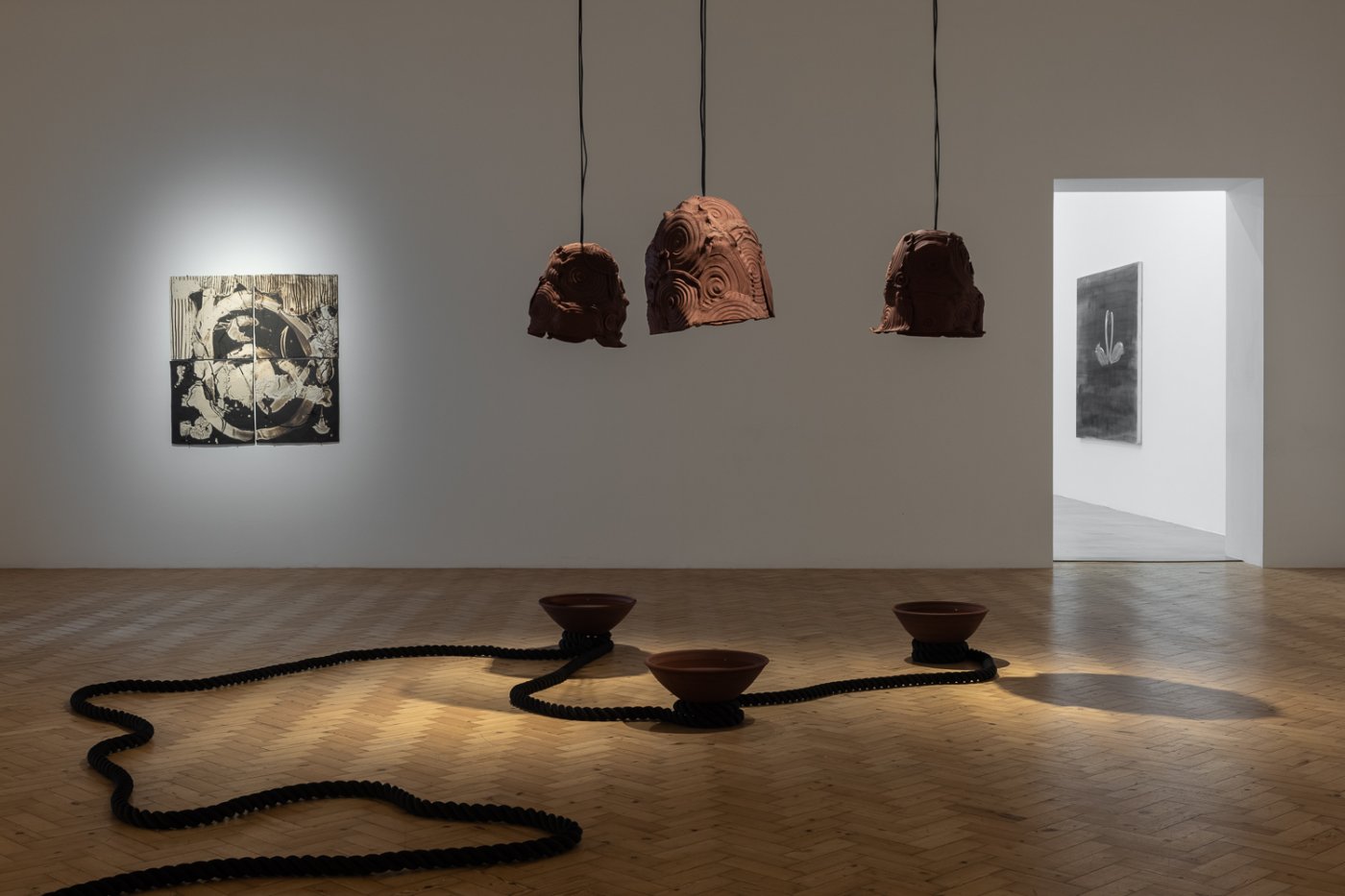 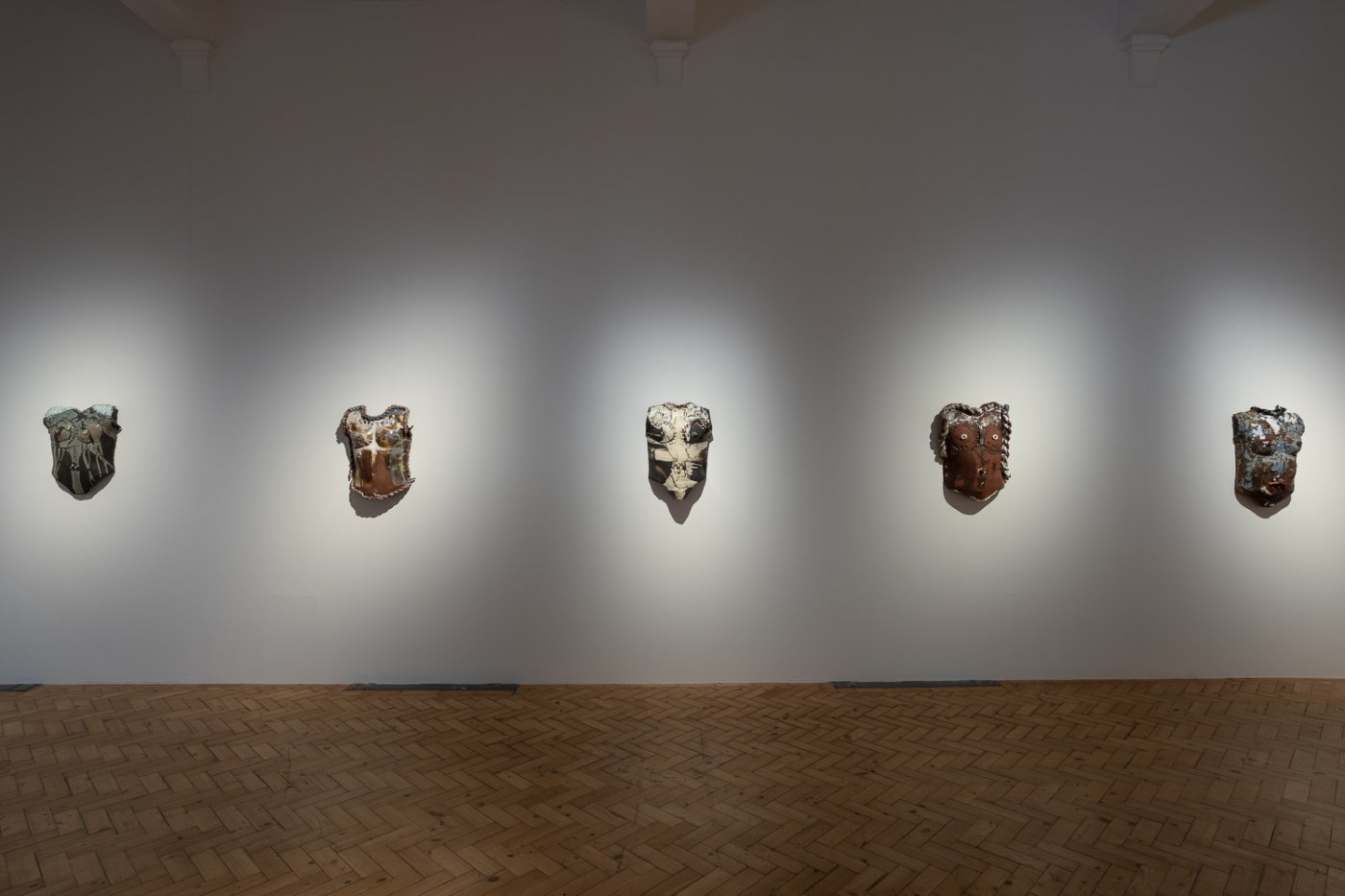 As the third recipient of the Freelands Lomax Ceramics Fellowship, Collings-James has spent the last six months working onsite developing several new bodies of work presented here. The subtle rules the dense (2021) is a group of torso casings that resemble Roman armour plates, relics of the reckless pursuit of conflict. A series of multi-panel clay paintings continues the artist’s work with sgraffito – a process that inscribes the surfaces with images, words and phrases. Many of these are recurring motifs and emerge from the artist’s interest in non-linear storytelling and symbolic language. They include imagery from mythological and religious traditions, such as the form of the spider which appears in Ashanti folktale as the trickster Anansi, the god of stories.

The sculptures continue the artist’s study of ceramic form through an engagement with tenderness, eroticism and the haptic qualities of clay, working with the malleability of the medium as it transforms, receives impressions, yields to wheel-thrown and hand-built techniques, and layers of slips and oxides. Works in unglazed red stoneware embody the transformation of earth to stone through the elemental force of fire, while the surfaces of other works bear delicate traces of plants foraged from Camden Art Centre’s garden. The many vessels speak to the artist’s interest in how these forms relate to the body as a container that holds precarious states of being – the site of physical as well as emotional processes.

The ceramic elements of the exhibition are held within a sonic landscape, composed and recorded by the artist in collaboration with sound designer, composer and artist, Mwen. An audio work combines free-standing, water-filled ceramic vessels that act as sounding stones or wells, receiving a rich tapestry of acoustic fragments, woven together from daily journeys through the streets of London and new recordings of poetry generated in tarot circles, led by artist Daniella Valz Gen over the course of the last year. Recordings of the watery movements of the sea resound with horns and samples from the coming-of-age, brass band film Our Song (Jim McKay, 2000), that tells the story of three young girls in Brooklyn, New York, who find expression playing musical instruments in a community marching band.

The title of the exhibition is borrowed from William Shakespeare’s Romeo and Juliet in which Romeo’s loyal friend Mercutio is slain with Tybalt’s sword, and more specifically from Harold Perrinau’s dexterous portrayal of Mercutio in Baz Lurhman’s 1996 film adaptation of the play. Infused with the lust and machismo of friendship, the visceral phrasing in this scene is flooded with metaphor as Mercutio is caught in the crossfire of a conflict without resolution, alienation and the chaos of love. The abundant metaphors in A Scratch! A Scratch! move through both the tenderness and tenderising of the body in poetry, language, object and mark-making. Moving through sensual, emotional and psychic registers, the exhibition is a litany for the broken-hearted, the bodies known and slain, the pierced, the spared, the loved, the lovers and always, the fools.

Collings-James has been developing two public programme events through her residency – the first is a conversation on poetry and symbolism with artist, poet and dancer Serafine1369; poet, artist and tarot practitioner Daniella Valz Gen; and musician and artist Kelman Duran. The second, an exploration of the legacies of the British studio pottery movement with ceramicist Grace McCarthy, looking at the specific legacy and labour history of studio potteries in Stoke-on-Trent.

The Freelands Lomax Ceramics Fellowship supports emerging artists working with clay. Between 2017-21, the Fellowship offers artists part-time six-month residencies at Camden Art Centre with an exhibition in the following year and also supports artists in spending a short period of her residency off-site, to develop aspects of her practices in a different context. In 2021 Camden Art Centre partnered with the Leach Pottery in St Ives, where Collings-James spent time working with ceramicists and gaining knowledge from the unique expertise offered at the historic home of Bernard Leach.