Curated by Peruke Projects in collaboration with A.I.

Rituals and Rebirths is a group exhibition curated by Peruke Projects in collaboration with A.I.. The exhibition examines the performances of three diasporic Southeast Asian multi-disciplinary artists, constructed around the rituals concerning the rebirths of their oeuvres and the marking of time. 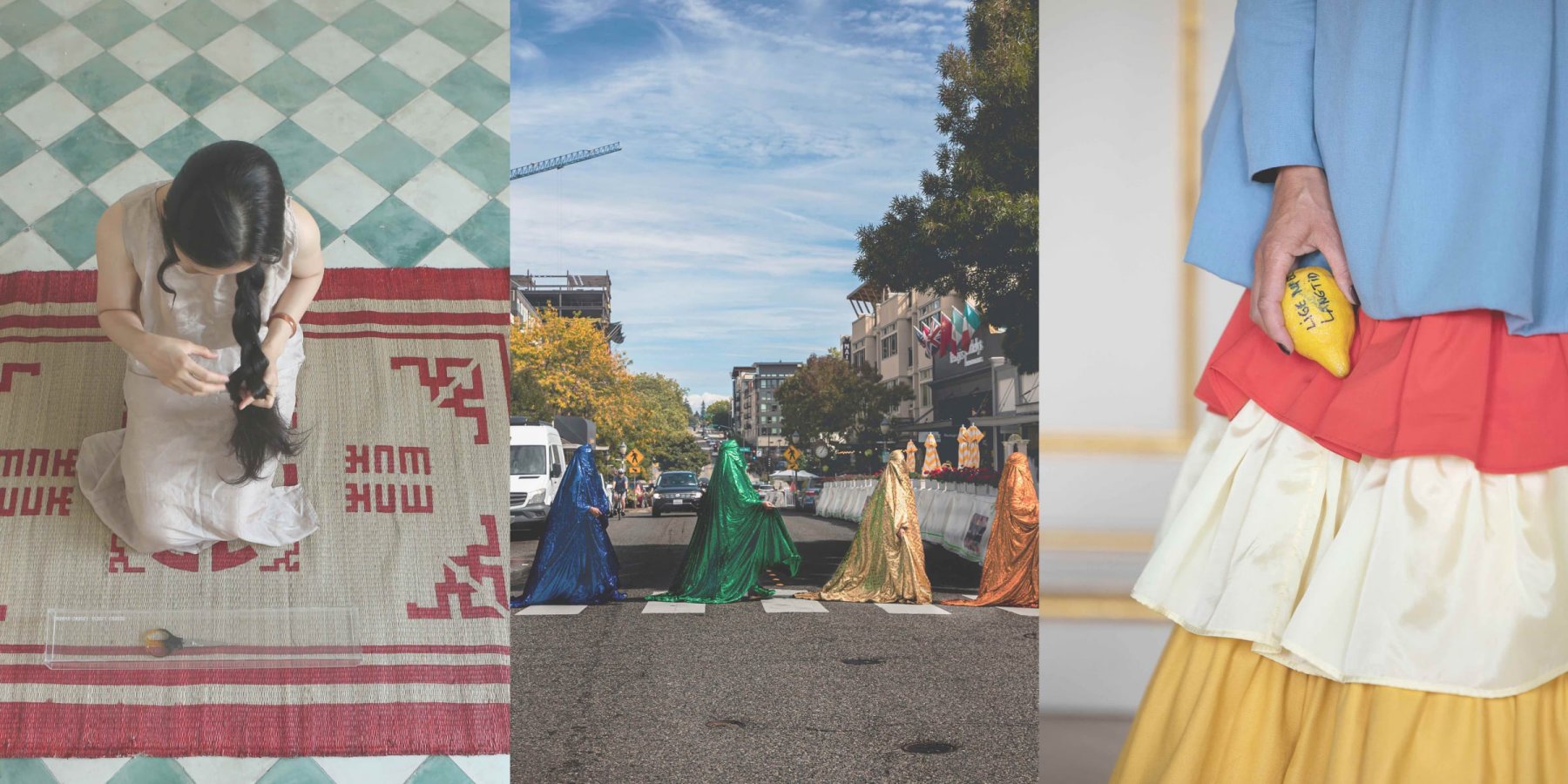 These three artists living between cultures, with transnational hybrid identities, are brought together for the first time alongside one another. This formidable trio – Anida Yoeu Ali (b.1974, Cambodia), Lilibeth Cuenca Rasmussen (b.1970, Denmark/Philippines), and Quỳnh Lâm (b.1988, Vietnam) – brings to a new audience an opportunity to reflect upon their experiences of crisis, displacement, and otherness, through their rituals, renewals, responses and provocations.

Presented as an installation of videos, photographs, symbolic objects and artefacts, and two participatory performances by Cuenca Rasmussen and Lâm, the artists document the passing of time in each of their ceremonies. Ali’s The Red Chador installation illustrates the death and rebirth of a provocative and politicized alter ego. Cuenca Rasmussen’s Today is your performance demonstrates the cyclical nature of life, while Lâm’s The Price of Humanity performance illuminates the tumultuous journey of a nomadic outcast.

Rituals and Rebirths explores the intersections of the three artists’ responses to the personal narratives that have shaped their identities.

This exhibition is supported by Outset Contemporary Art Fund and Embassy of Denmark, London.

Utilising an interdisciplinary approach to artmaking, Anida Yoeu Ali’s installation and performance work investigates the artistic, spiritual and political collisions of a hybrid transnational identity. The Red Chador series directly confronts the misrepresentation of Muslim women in an era of heightened Islamophobia and continues the artist’s thematic use of religious aesthetics and rituals to provoke ideas of otherness.

Cloaked in a red sequin chador, or “Muslim” headdress, Ali enters public places in cities around the world to challenge the public’s perception and fears of the “other”. Her interventions take the form of durational performances, where she walks silently for hours along main streets, alleyways, beach fronts, and historic sites, and stopping at everyday locales such as train stations and bus stops.

The artist counters public complicity to “othering” through performances that are hyper visible and public. This exhibition illustrates the Chador’s intimate performances, and the journey of the character’s birth, death, and rebirth, calling on those she encounters to ask themselves a few simple questions: “If you encounter The Red Chador, would you fear her or walk with her? Would you help her across the terrain, or would you block her path? Would you take a moment to notice her? Would you care at all?”

Since 2013, Lilibeth Cuenca Rasmussen has been contextualising and actualising rituals, starting with the site specific ‘Gaia’ series that illustrates belonging and connecting geographically to a certain place. Today is your engages directly with the viewer, whether in the exhibition space, outside the gallery or on the streets of London.

A new iteration of Cuenca Rasmussen’s 2020 performance 23.5°, which took place in Copenhagen during the summer solstice and focused on the positive aspects of life in the midst of the global pandemic, Today is your is the extension and rebirth of an established ritual that celebrates light and health.

An embodiment of well-being and symbolising vitamins, the lemons, with phrases written on them, are an integral part of the performance as the artist distributes them to everyone and anyone who wishes to receive them. The words are open-ended fragments of sentences with affirming output, written by the artist, each individual text contributing towards a more extended sentence. Although the lemon, as a fruit, has various connotations and symbolic meanings in different cultures and religions, the artist wishes to keep the story in flux.

By accepting a lemon, the spectator interacts with the performance, moving it forward, as the fruit becomes a personal object with an unfolding narrative.

Quỳnh Lâm’s latest series evolved over the last four years while living a nomadic existence, researching and working in the United States, Europe, and eventually Thailand where she completed her research during her artist residency with Peruke Projects. Her full objective is to document and present her research, as well as illustrate her emotional and creative responses to her time living in the diaspora, during the Covid-19 pandemic, surviving the traumas of being a target of racism, and the challenges of being unable to return to her home country.

Separated from her homeland, Lâm’s performance is both a tribute and a documentation of, in, and among the diaspora and her personal experiences as a “refugee”. Having let her hair grow out during the four-year passage of time, she now cuts it for the audience to confront toxic stereotypes and hate crimes towards Asian women.

As the artist enacts the ritual of cutting and collecting the hair in a box, by using a pair of scissors that denote a personal history for her, she yearns to elicit emotive responses from the audience as she invites them to participate through the abstract form of language, history, and memory. More specifically, with her use of paper notes highlighting traumatic experiences, the presentation of some of her possessions, and fragments of a body that moves endlessly through space and time, Lâm shares a spiritual and highly charged, ephemeral instance with the viewer.