Robert Longo: The New Beyond

Robert Longo: The New Beyond

In The New Beyond, American artist Robert Longo presents his most recent series of monumental charcoal drawings paying homage to the European pioneers of post-war art. 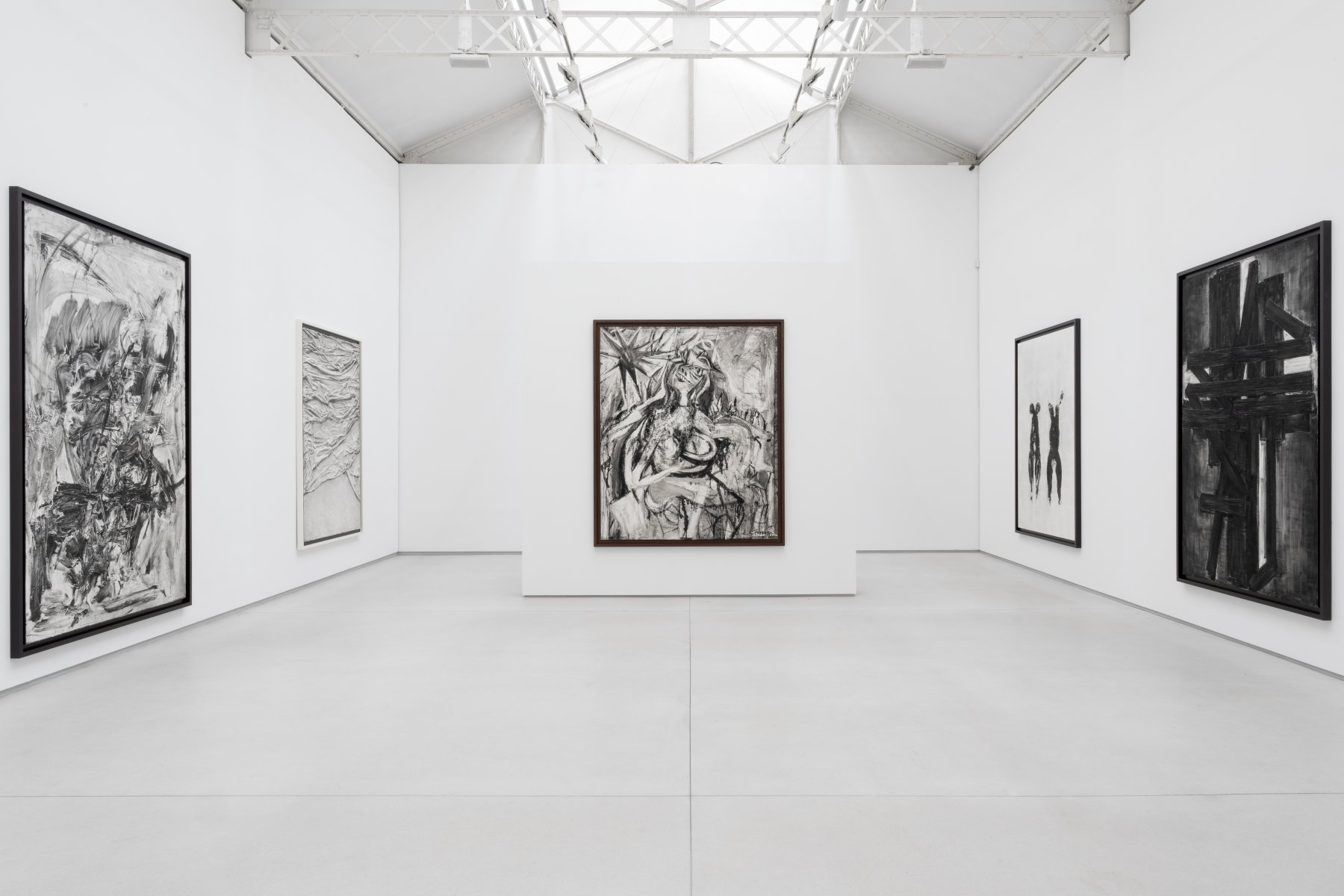 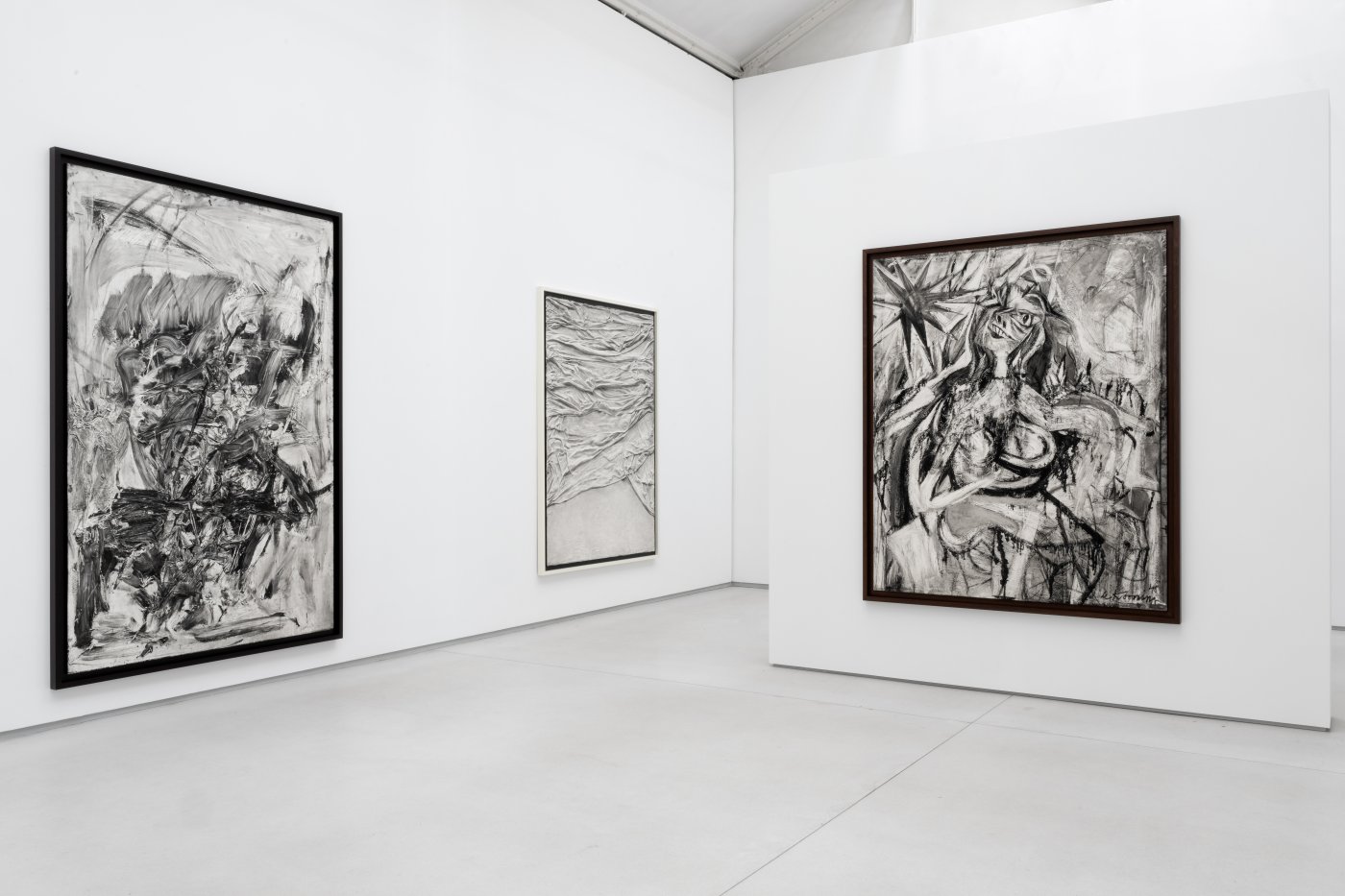 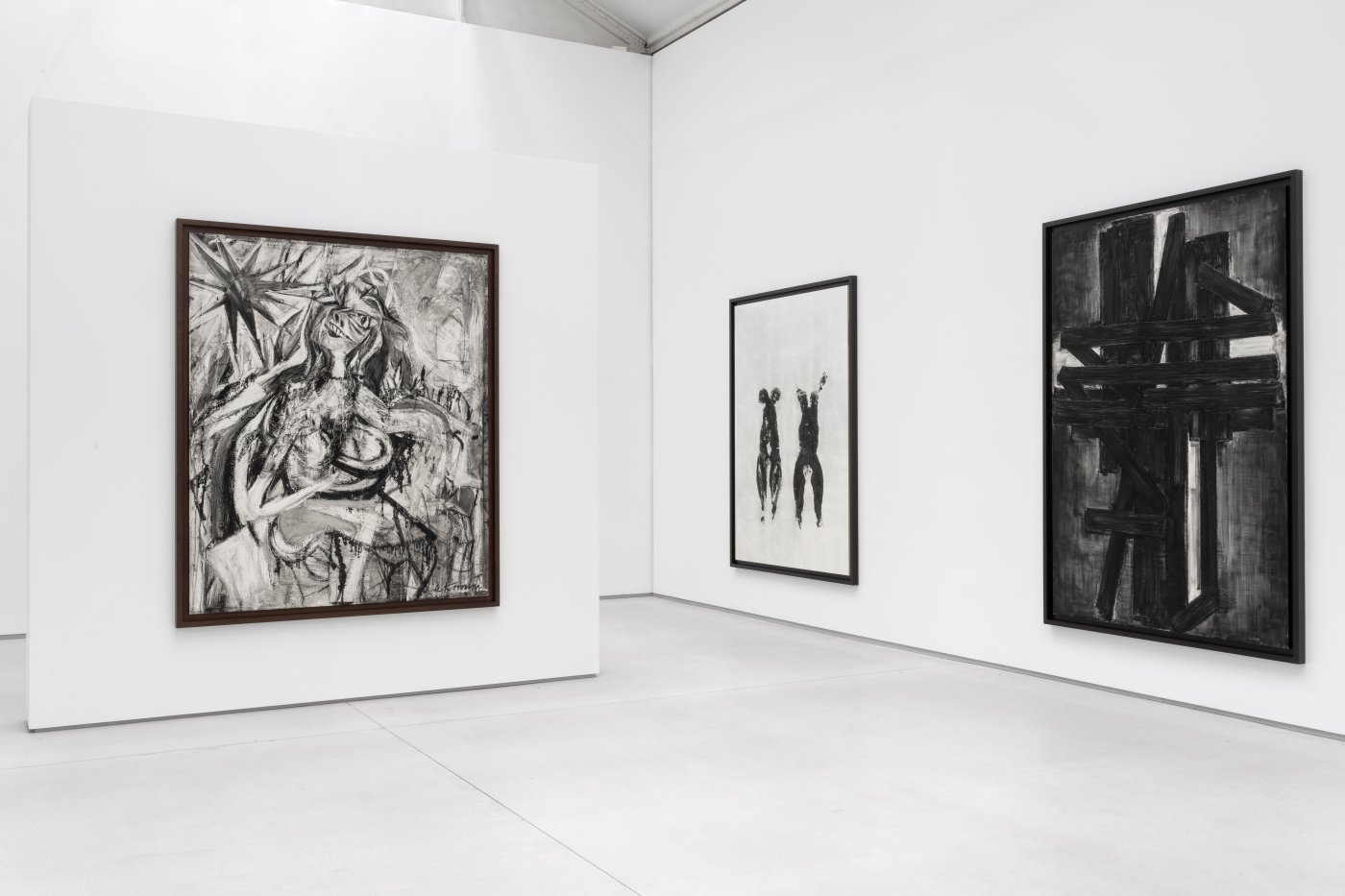 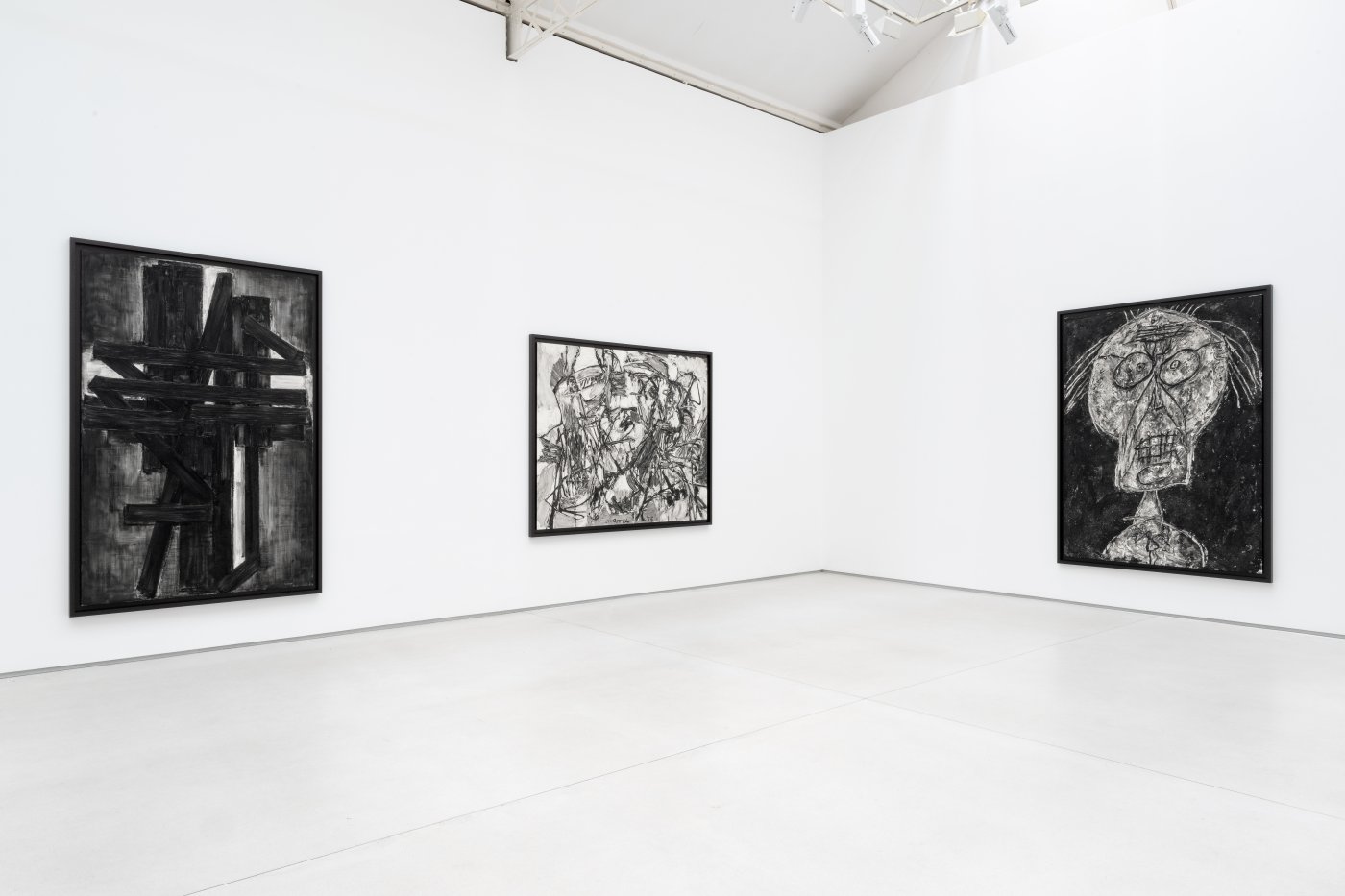 Following his 2014 series of drawings based on American Abstract Expressionism, in this exhibition, Longo explores the work of Karel Appel, Jean Dubuffet, Arshile Gorky, Asger Jorn, Yves Klein, Willem de Kooning, Maria Lassnig, Piero Manzoni, Joan Mitchell, Pierre Soulages, Wols and Zao Wou-Ki. As many of these artists worked in Europe – several of them in Paris – in the years following the Second World War, their experimental and multifarious practices revolutionised art after the trauma of the devastation of war. By revisiting their work in a contemporary context, Longo offers this exhibition as a ‘historical construction’, highlighting the continued influence of these artists, finding a present-day resonance in their ability to transcend through their work the fraught circumstances of a radically changing world.

The exhibition takes its title from a 1952 essay by French art critic Michel Tapié, which identifies a new horizon for European Art, heralded by painters such as Jean Fautrier and Jean Dubuffet. Breaking with the traditional codes of painting, these artists produced, in Tapié’s words, ‘something so extraordinary, endowed with a magic so stupefying, so useless in the dreary framework of the everyday, and at the same time so irreducibly necessary to those who, from day to day, seek to live the parabola of our age.’ For Longo, who was born in 1953, this period of artistic revolution is of particular interest, having laid the groundwork for abstraction, as well as new multimedia forms of artistic expression. Transposing such iconic paintings into charcoal drawings requires him, as art historian Dominique de Font-Réaulx writes in the exhibition catalogue, to ‘get to the heart of the work’. Together with the artist, viewers are invited to engage with the way these artworks were made and embark on a journey to the time of their making.

The process of creating a charcoal drawing is almost entirely opposite to the process of creating a traditional painting. Starting with a white page, Longo gradually and meticulously darkens certain areas to create shadow, ending with the points of deepest black, whereas, in a traditional painting, highlights are applied at the end, over the darker tones. In contrast to the exuberance of a painting such as Bleu, bleu, le ciel bleu (1961) by Joan Mitchell, Longo’s approach is measured, even ‘forensic’. But as he studies every brushstroke, carefully recreating their material modulations and nuances of colour out of dry, black charcoal, he celebrates the materiality of paint that is, according to Font-Réaulx, ‘the sensitive and intimate meaning of these works.’ Longo’s drawings are saturated with the time of their making.

‘Barnett Newman said that the Abstract Expressionists were representational artists working abstractly,’ reflects Longo, ‘I think I’m an abstract artist working representationally.’ Almost all of Longo’s drawings of paintings in the exhibition are larger than the originals, reversing the traditional hierarchy between the mediums. ‘The Manzoni reminded me of Rauschenberg’s bed Combine,’ recalls the artist, ‘but in fact, Manzoni’s piece is only around 20 inches wide. So I made my Manzoni drawing the size of a bed. It looks like you could climb into it.’ Shown without glass, the works reveal their haptic qualities to viewers in an unprecedented way, both in terms of Longo’s larger-than-life rendering of the original paint application and the proximity to the texture of the charcoal on paper. While paying homage to these painters Longo not only establishes a dialogue between drawing and painting, but also calls into question the value systems of the art world, prompting us to revisit our relationship to images.

‘All art is a form of political expression,’ believes Longo, who describes himself and all other artists as ‘the reporters of the time that we live in.’ Alongside the drawings of paintings, four smaller charcoal and graphite drawings based on photographs spanning the end of the war to the cultural revolution of 1968 illustrate the context in which the original paintings were produced. They depict the city of Dresden in ruins in 1945 and the mushroom cloud exploding over Nagasaki that same year, as well as Elvis Presley in concert in 1956 and a Soviet tank in Prague in the spring of 1968. ‘When I made drawings based on the American Abstract Expressionists,’ recalls Longo, ‘I focused on the fact that a lot of younger American artists were starting to work very abstractly, very anti-political, anti-intellectual, very process-oriented.’ This jarred with the fraught political context of the USA at the time, prompting Longo to look to the origins of contemporary abstraction.

It is now widely known that the work of the Abstract Expressionists was appropriated by the American government for its apparent lack of political message and used as propaganda in the form of a travelling exhibition in Europe, whereas the European avant-garde was seen as radical and many of its proponents were rejected by the establishment. As Tapié wrote, ‘art, at that point, can be only a kind of sorcery, of the greatest consequence, inducing us to accept, with full knowledge of what we are doing, the dizzying grandeur of a test of violence beyond considerations of “art criticism”.’ With uncertainty dominating the current political climate in Europe, Longo’s most recent series of drawings encourages us to look to the work of artists whose art helped heal the wounds of war and imagine a different future. As they laid the foundations on which artists still build today, their example might guide a younger generation.

The New Beyond will be accompanied by a newly-published catalogue, with an original essay by Dominique de Font-Réaulx, director of mediation and cultural programming at the Musée du Louvre.