Goodman Gallery presents Jazz and Blues at Night, a new series of prints, tapestries and mixed media collage works by Sam Nhlengethwa, paying homage to the musicians that have inspired him throughout his five decades-long artistic career. This marks Nhlengethwa’s first solo exhibition in London, following a smaller presentation of his work in London last year as well as a recent solo exhibition at the Rupert Museum in Stellenbosch, South Africa. 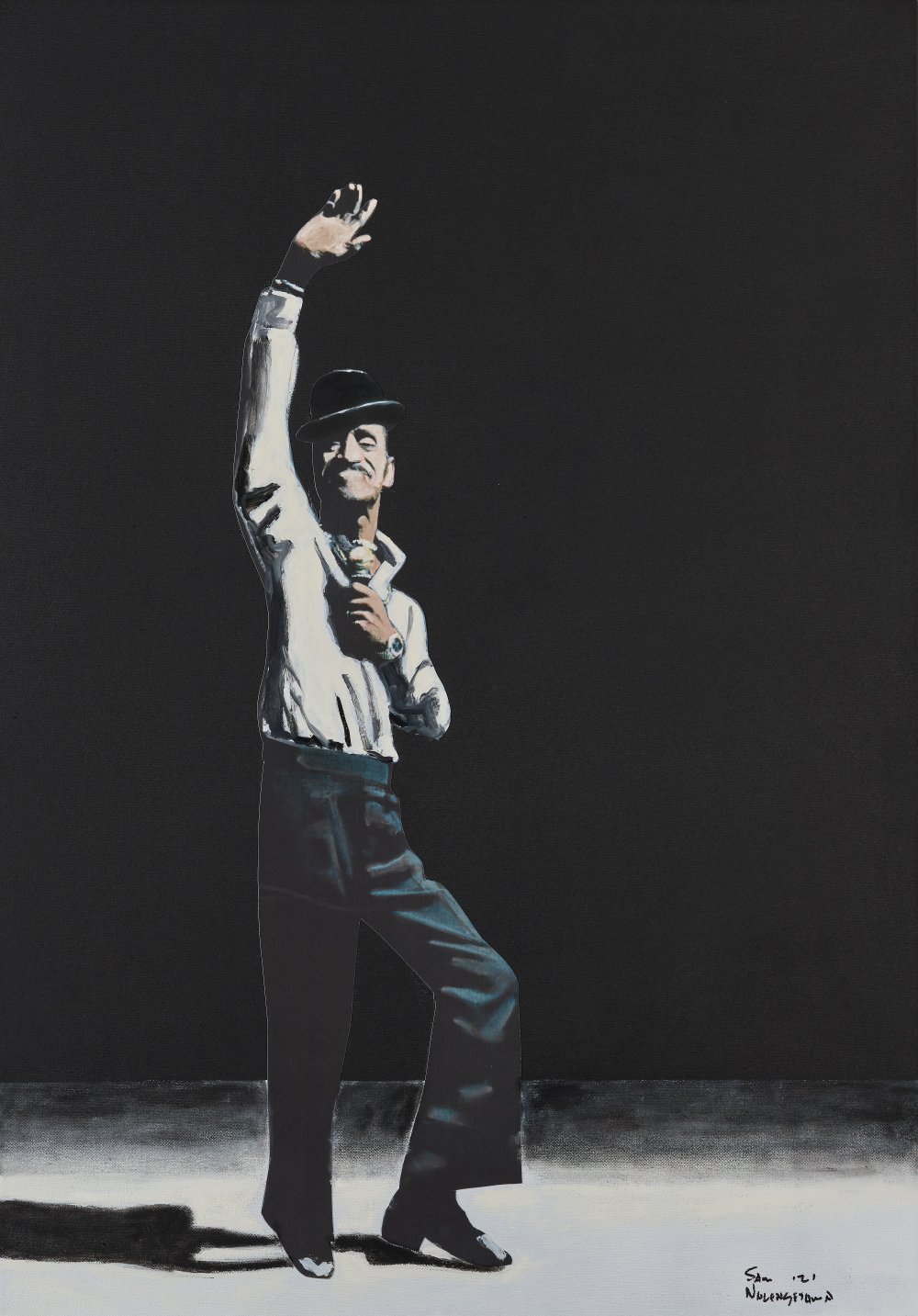 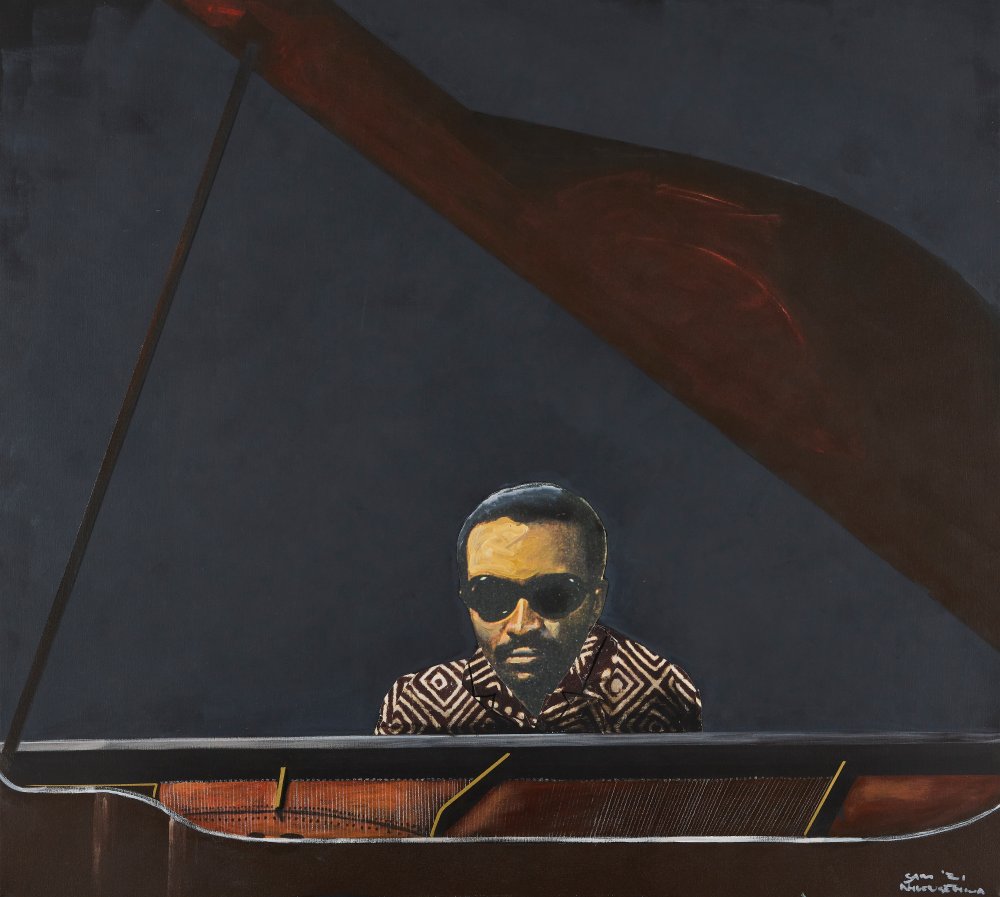 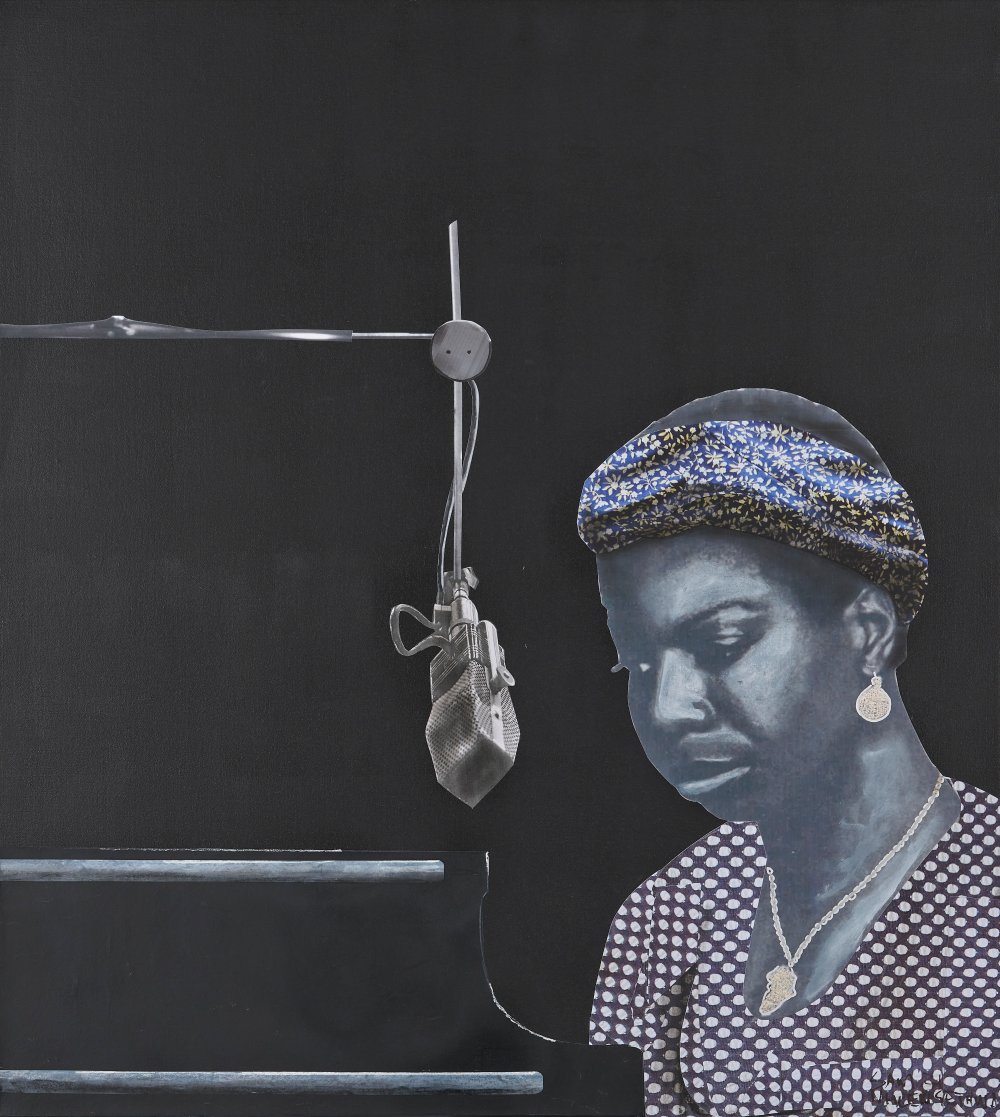 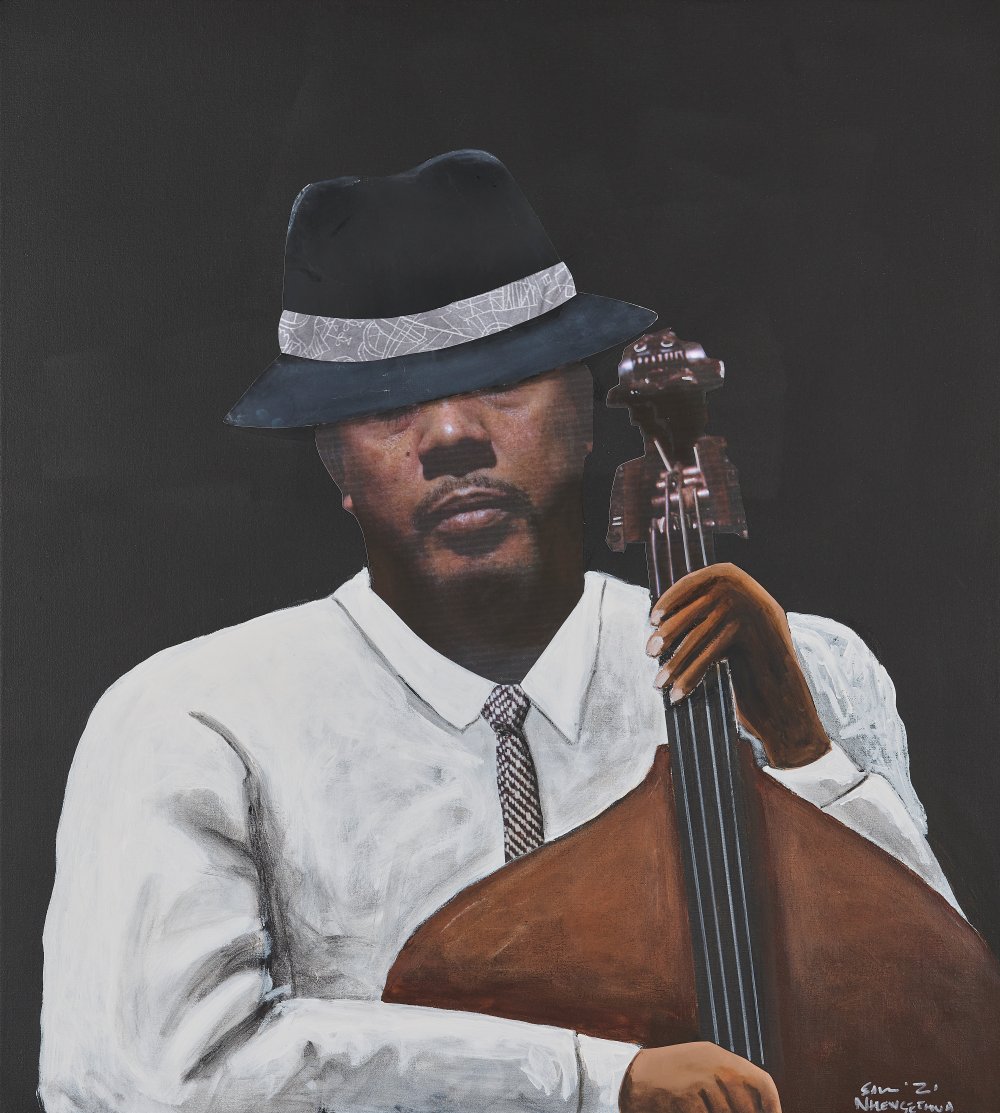 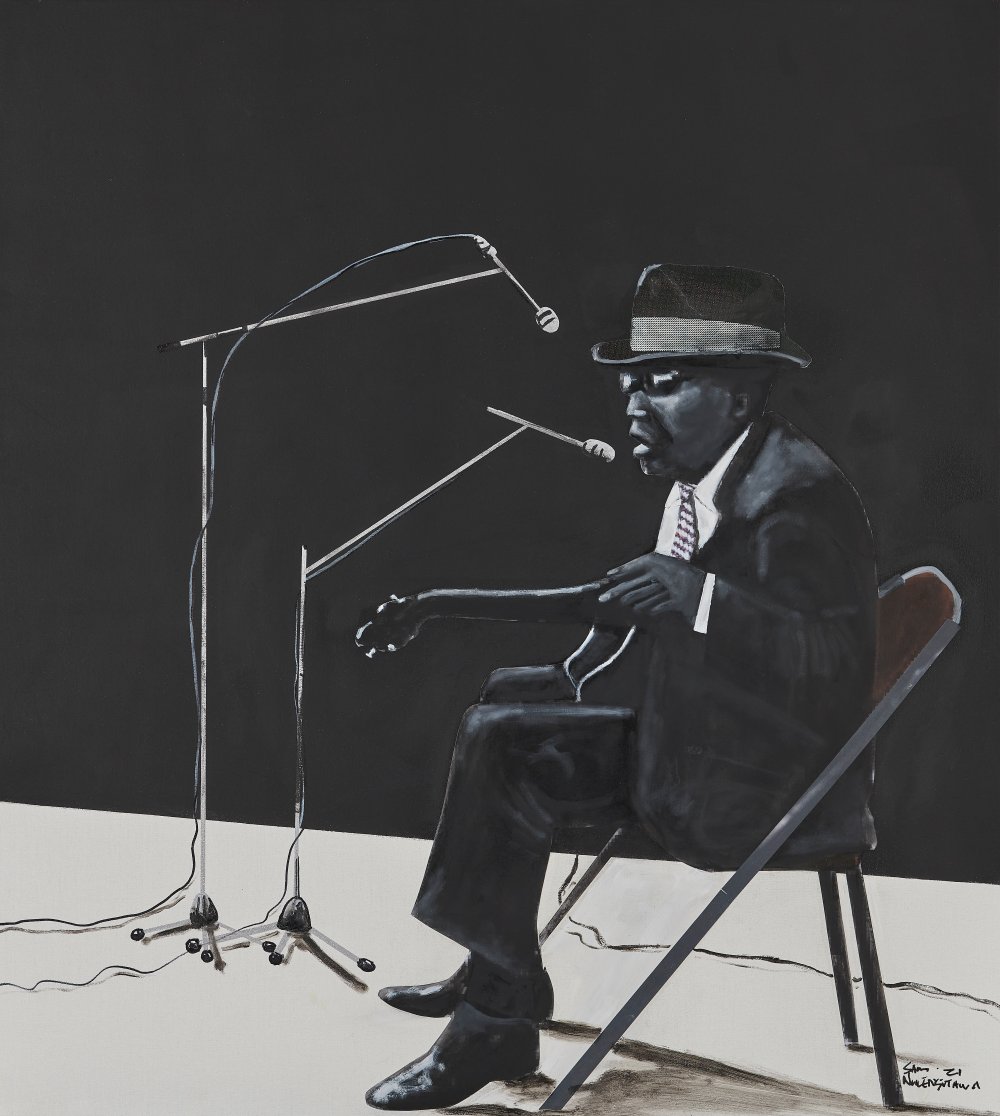 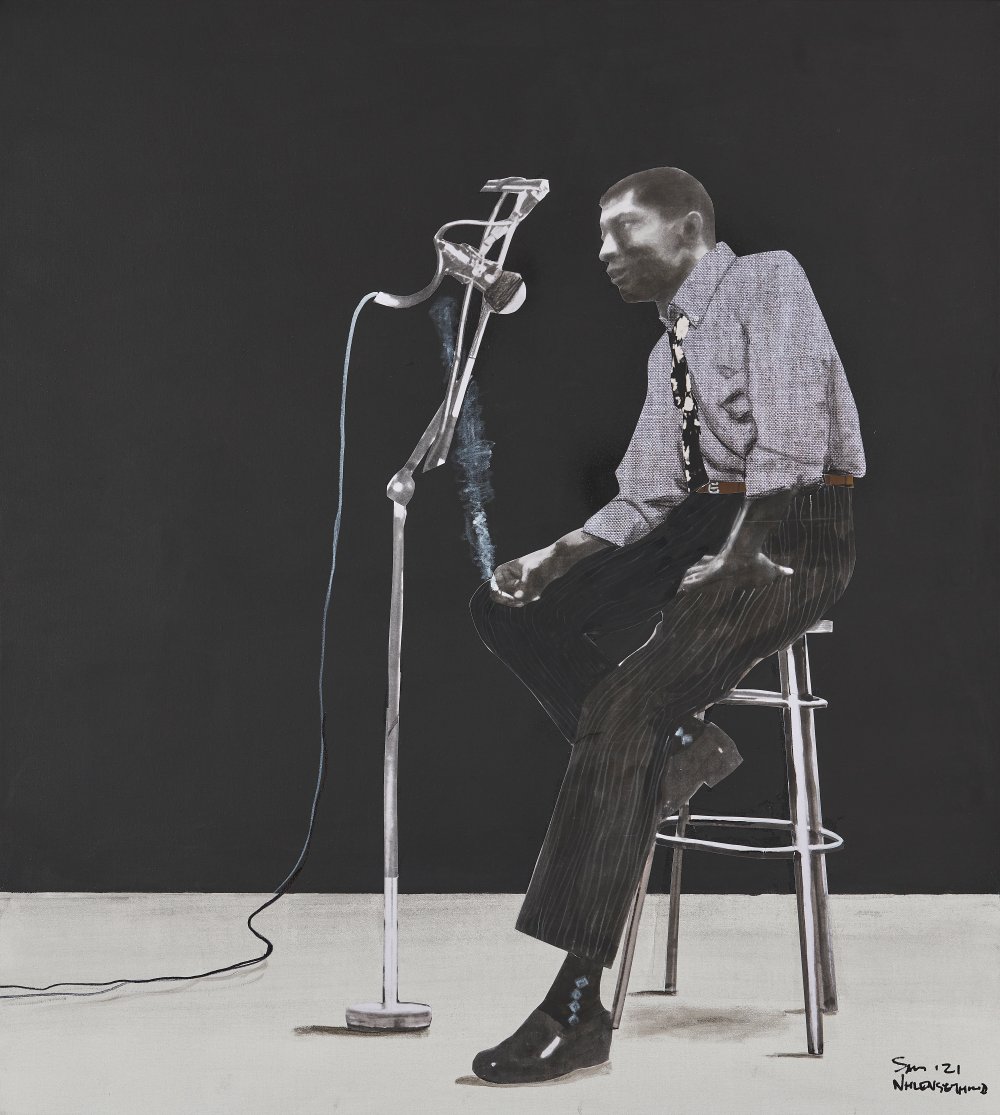 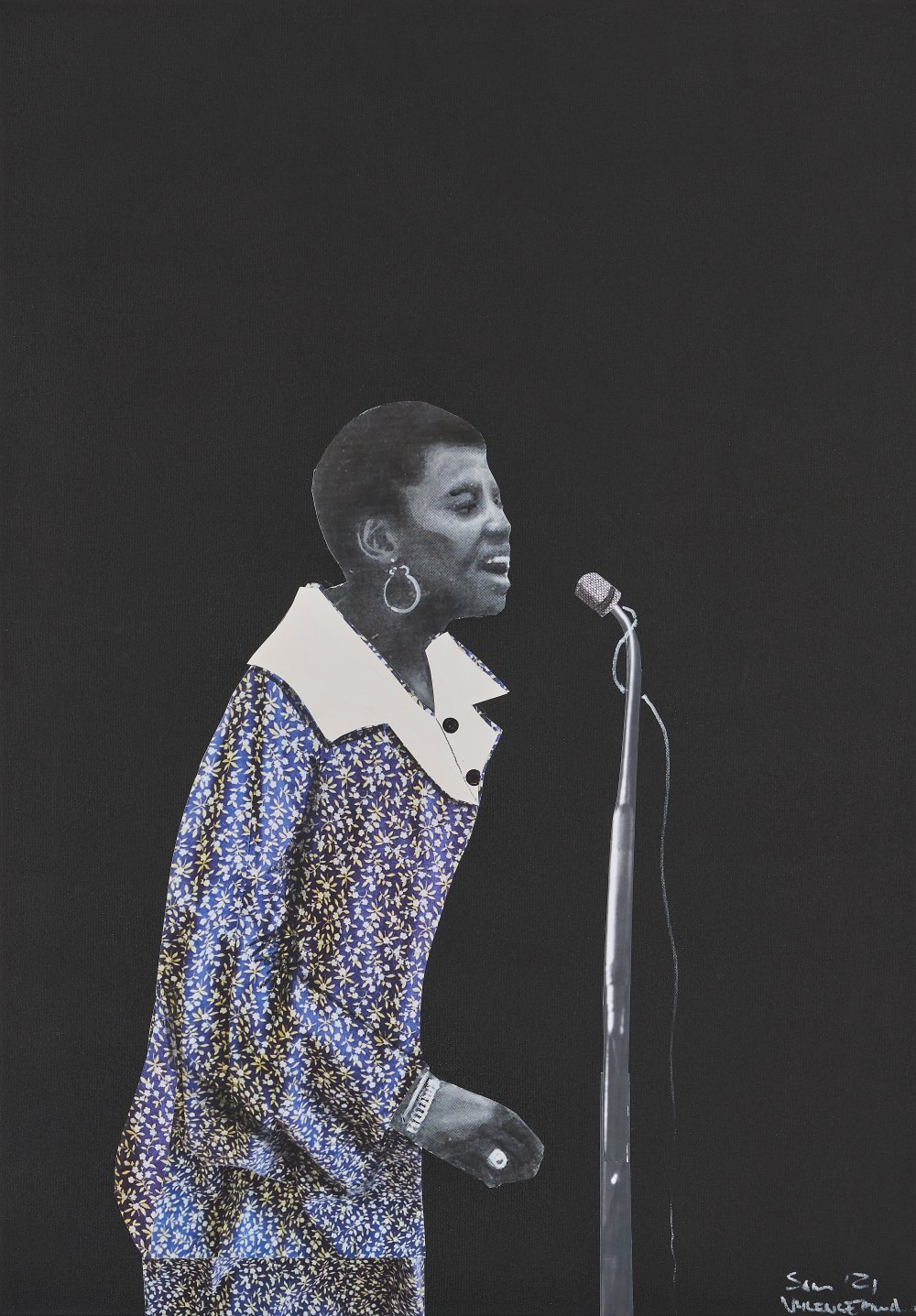 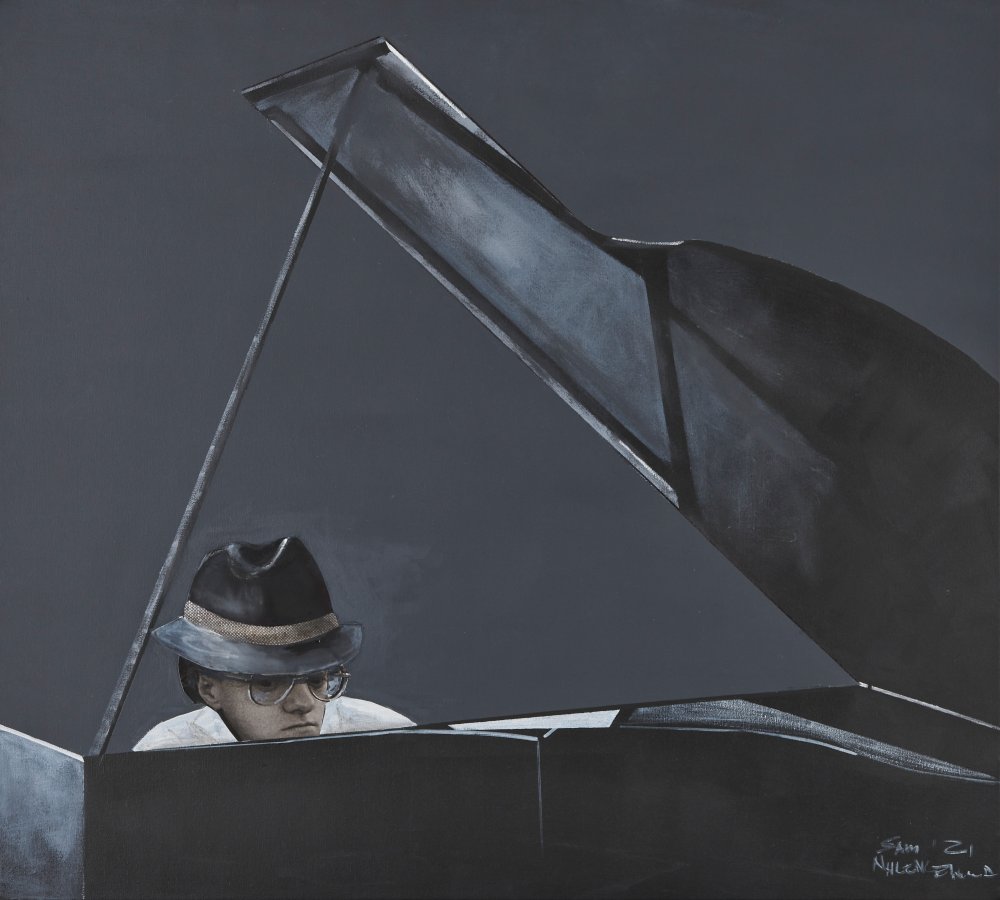 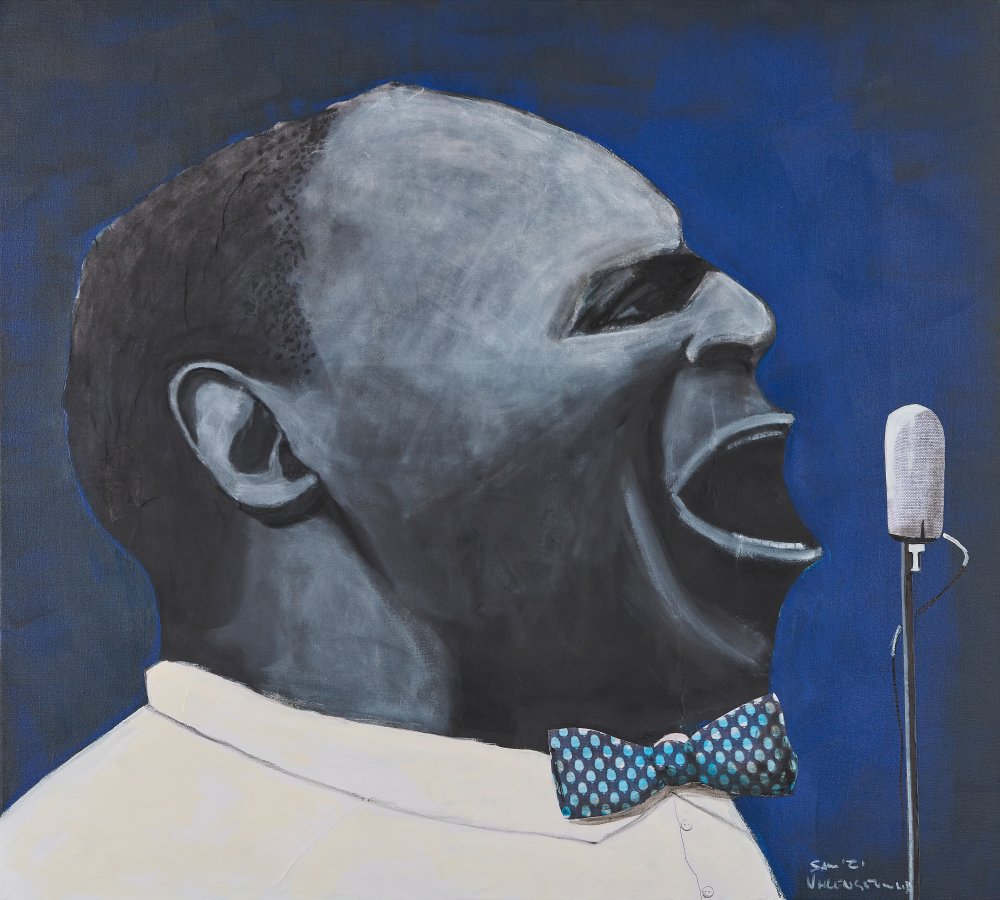 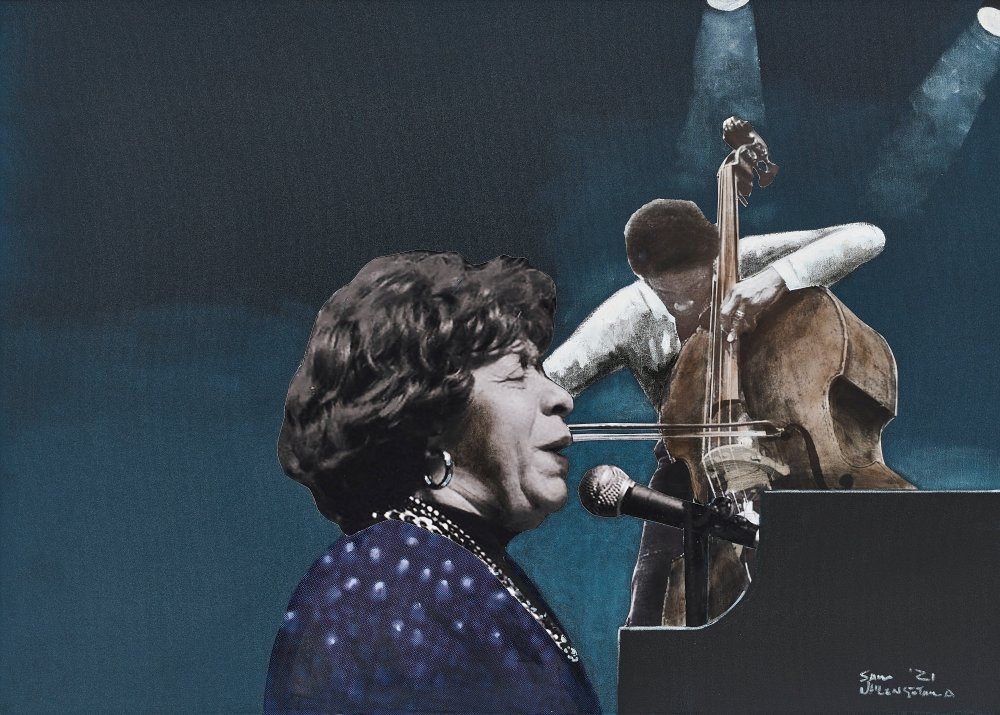 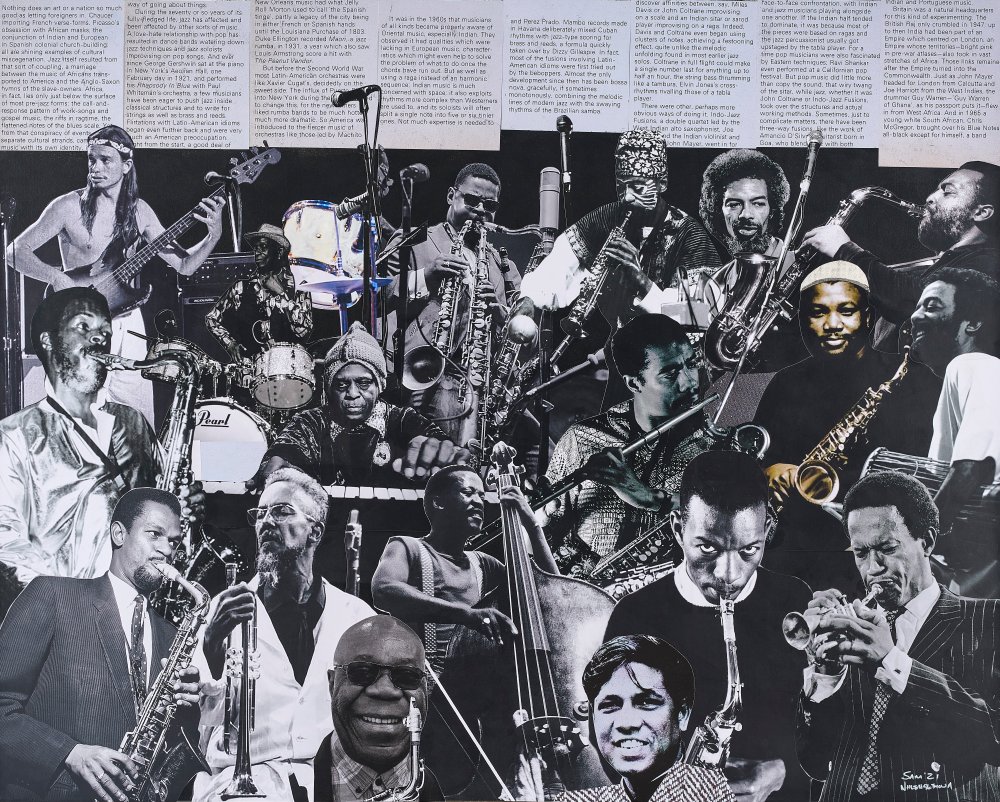 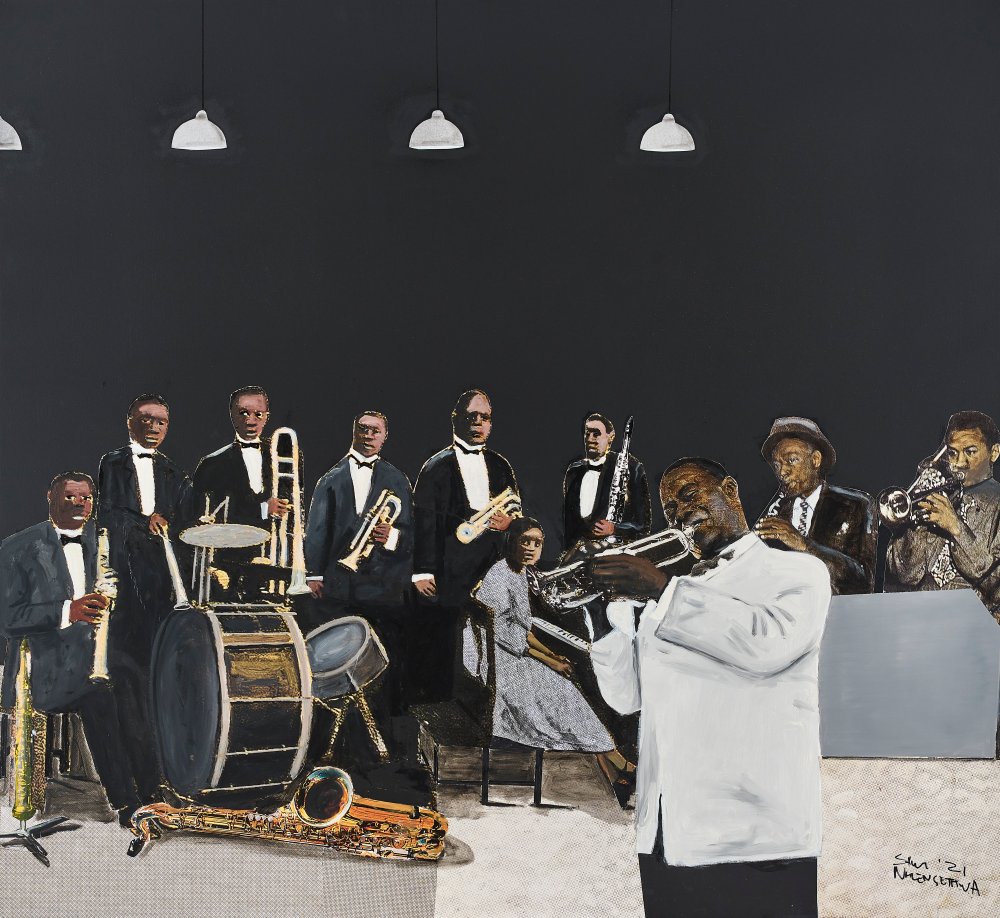 Sam Nhlengethwa
Satchmo and his band, 2021 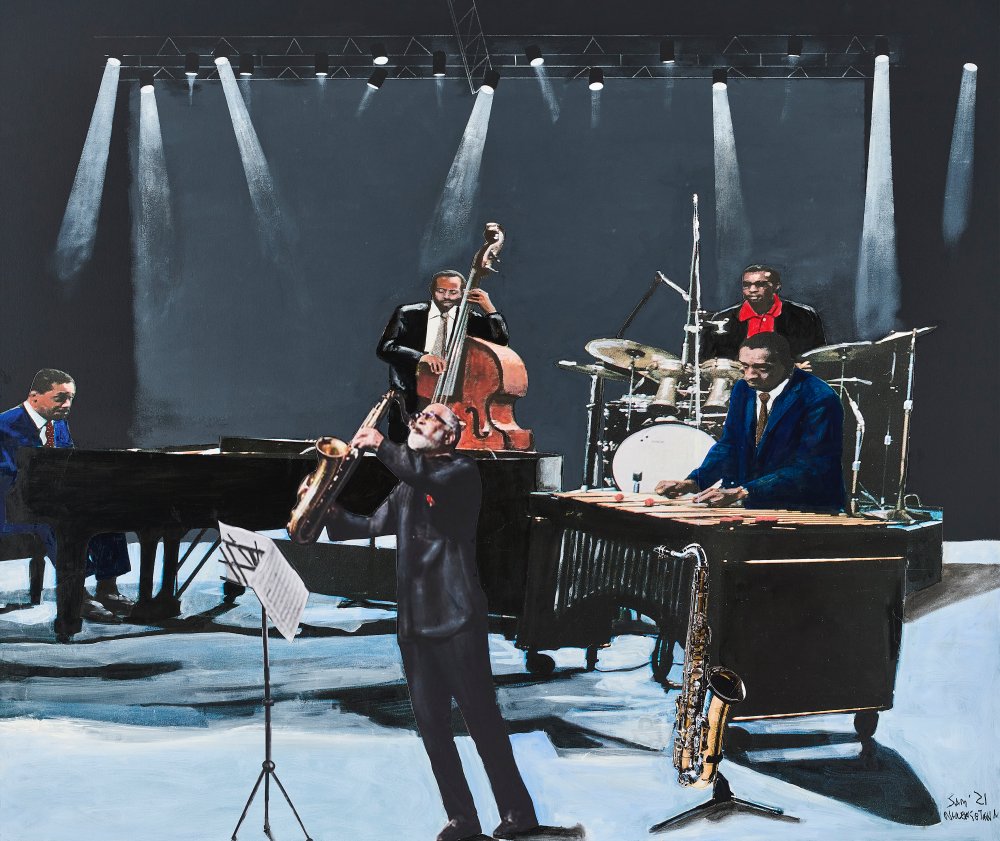 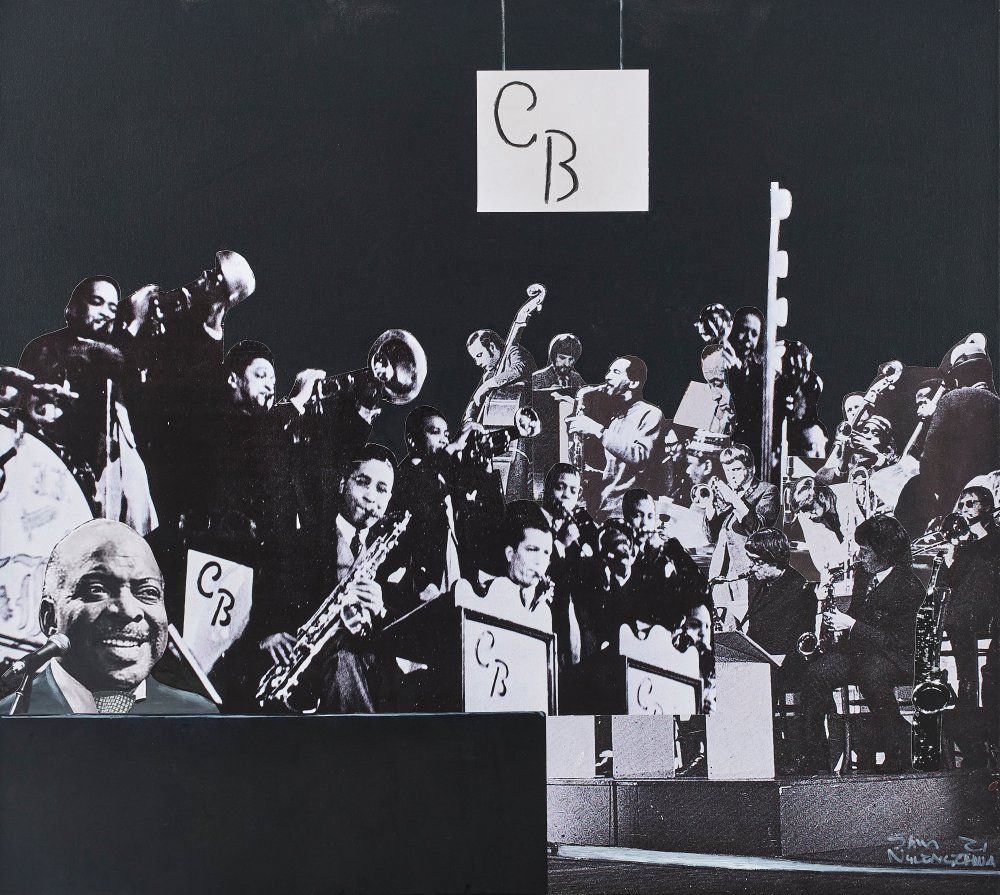 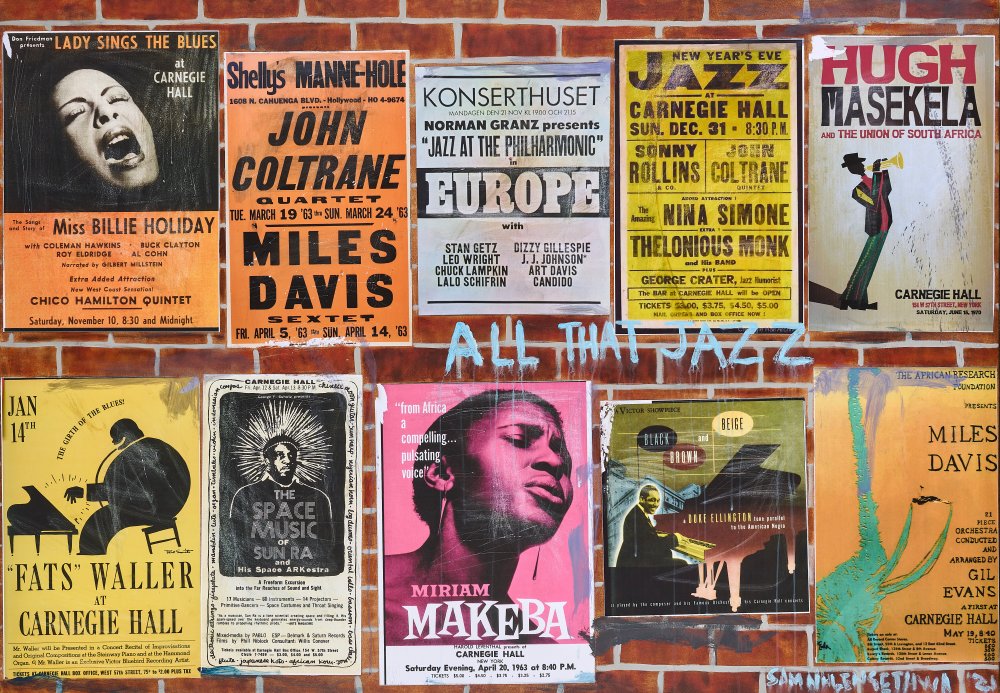 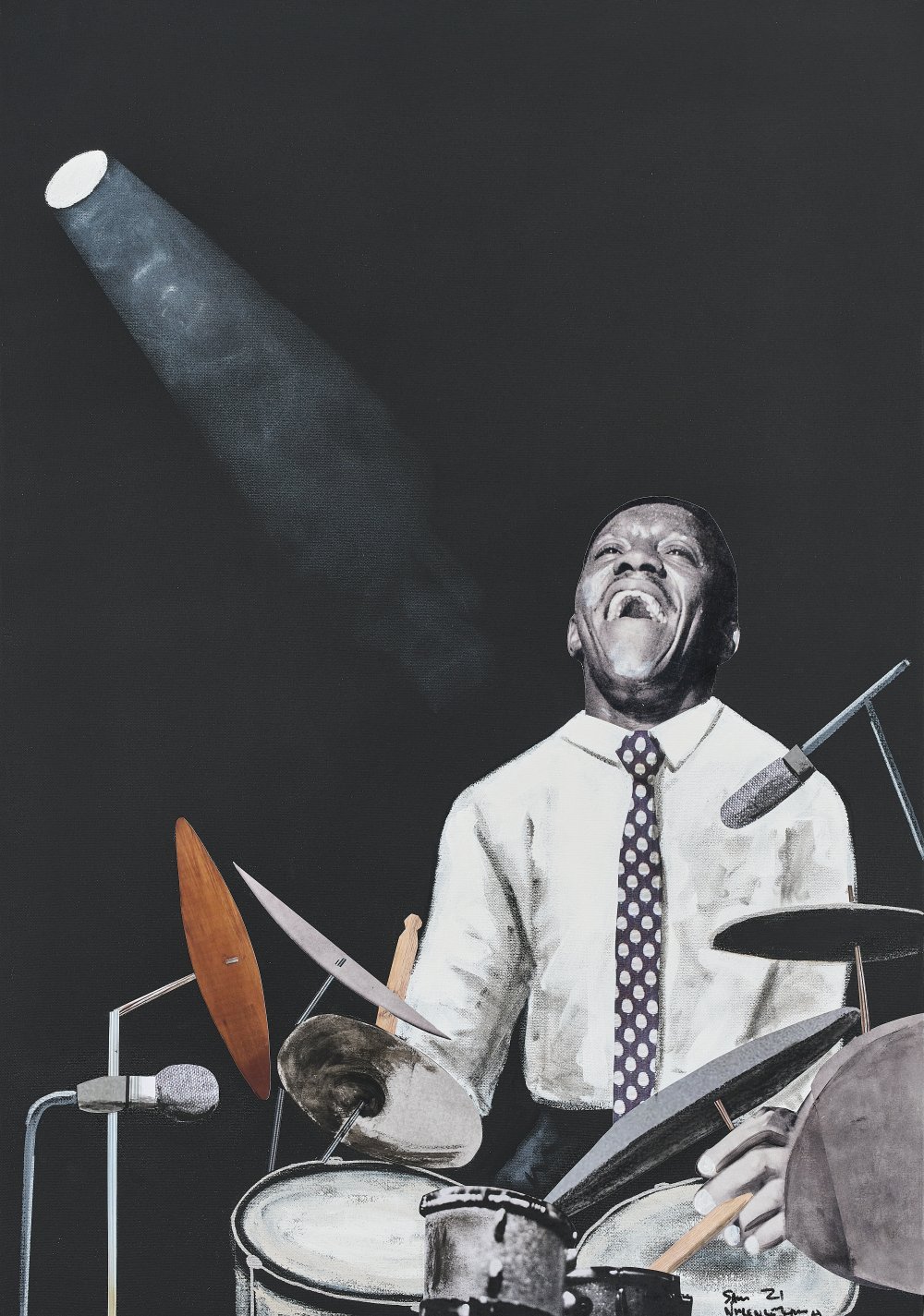 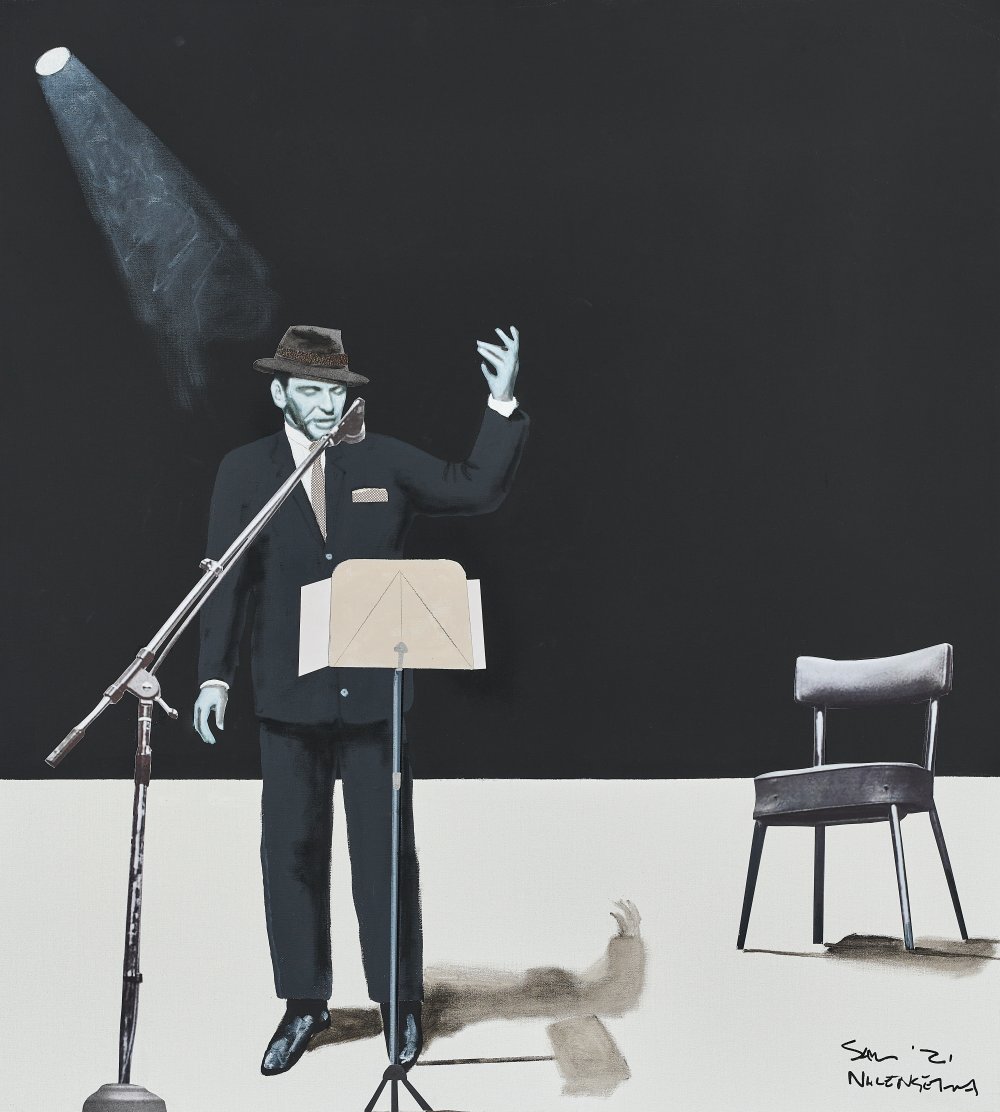 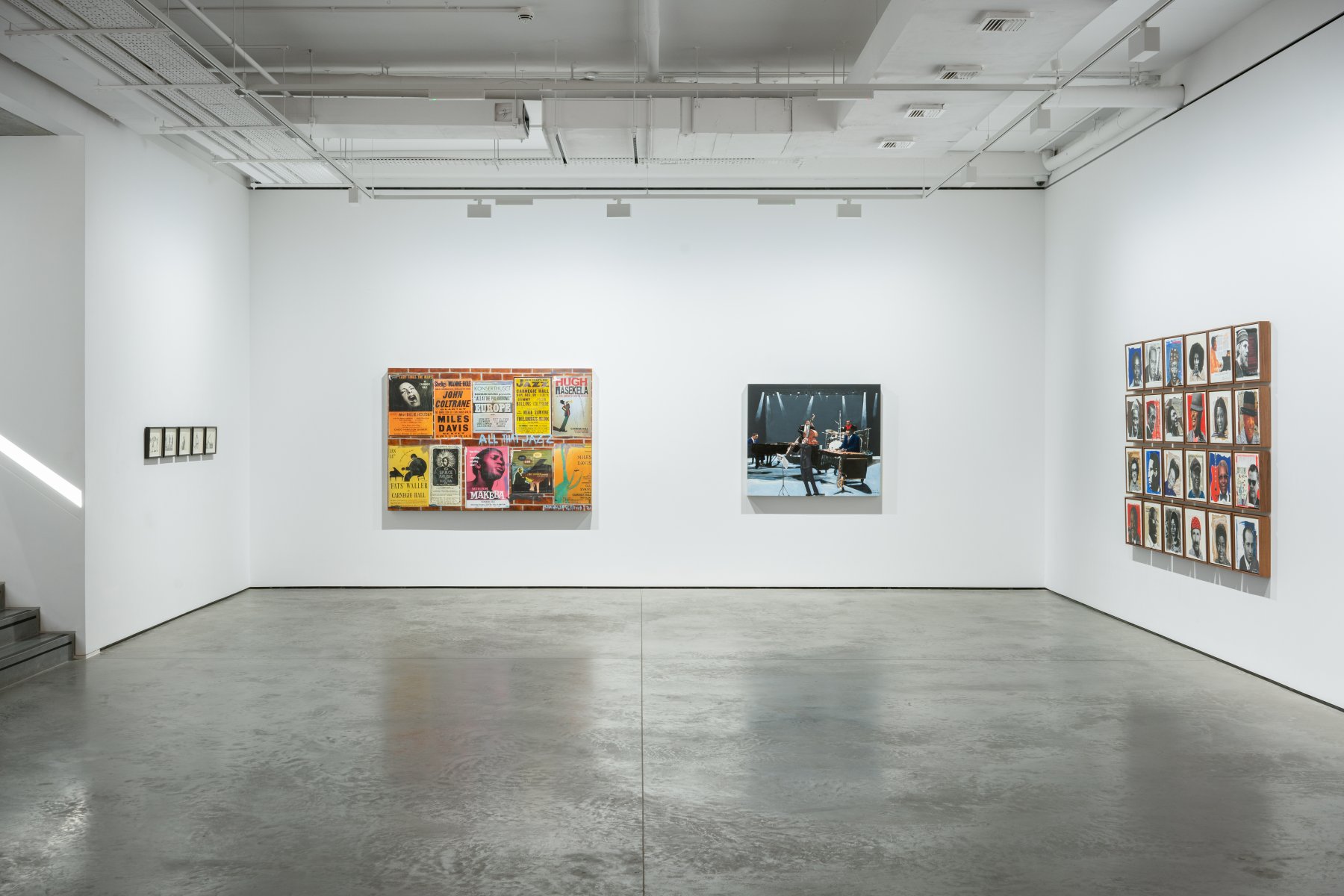 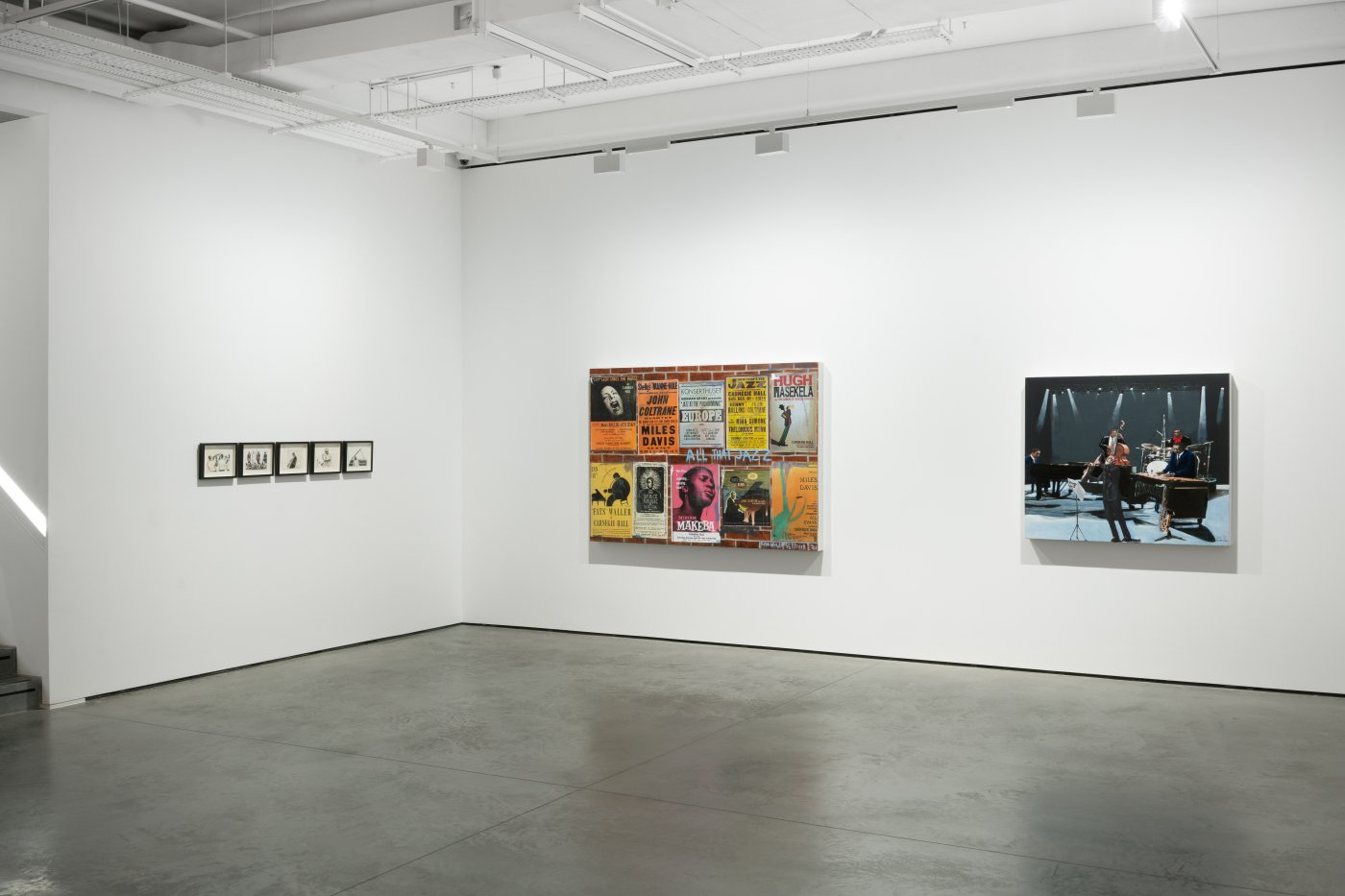 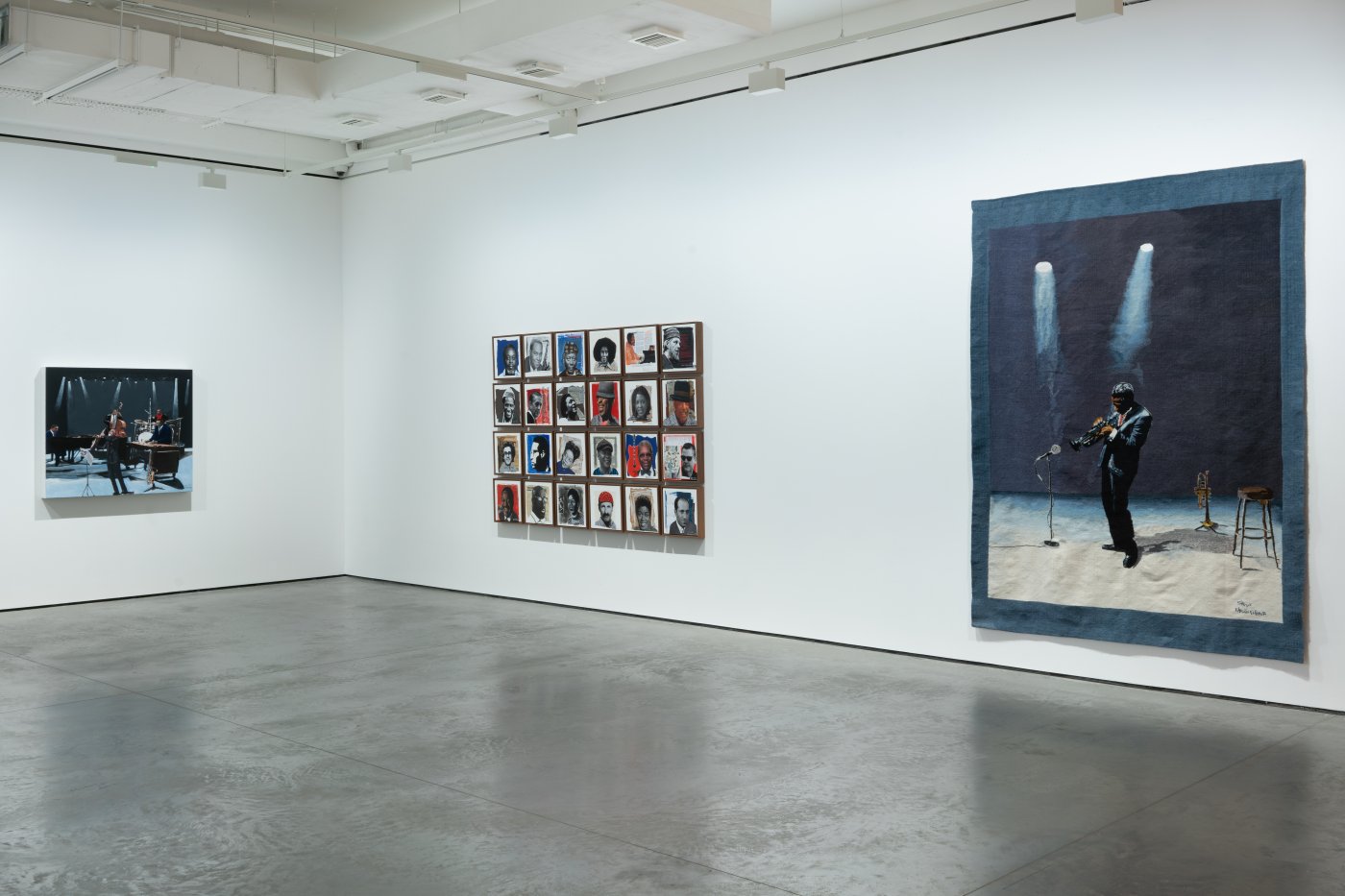 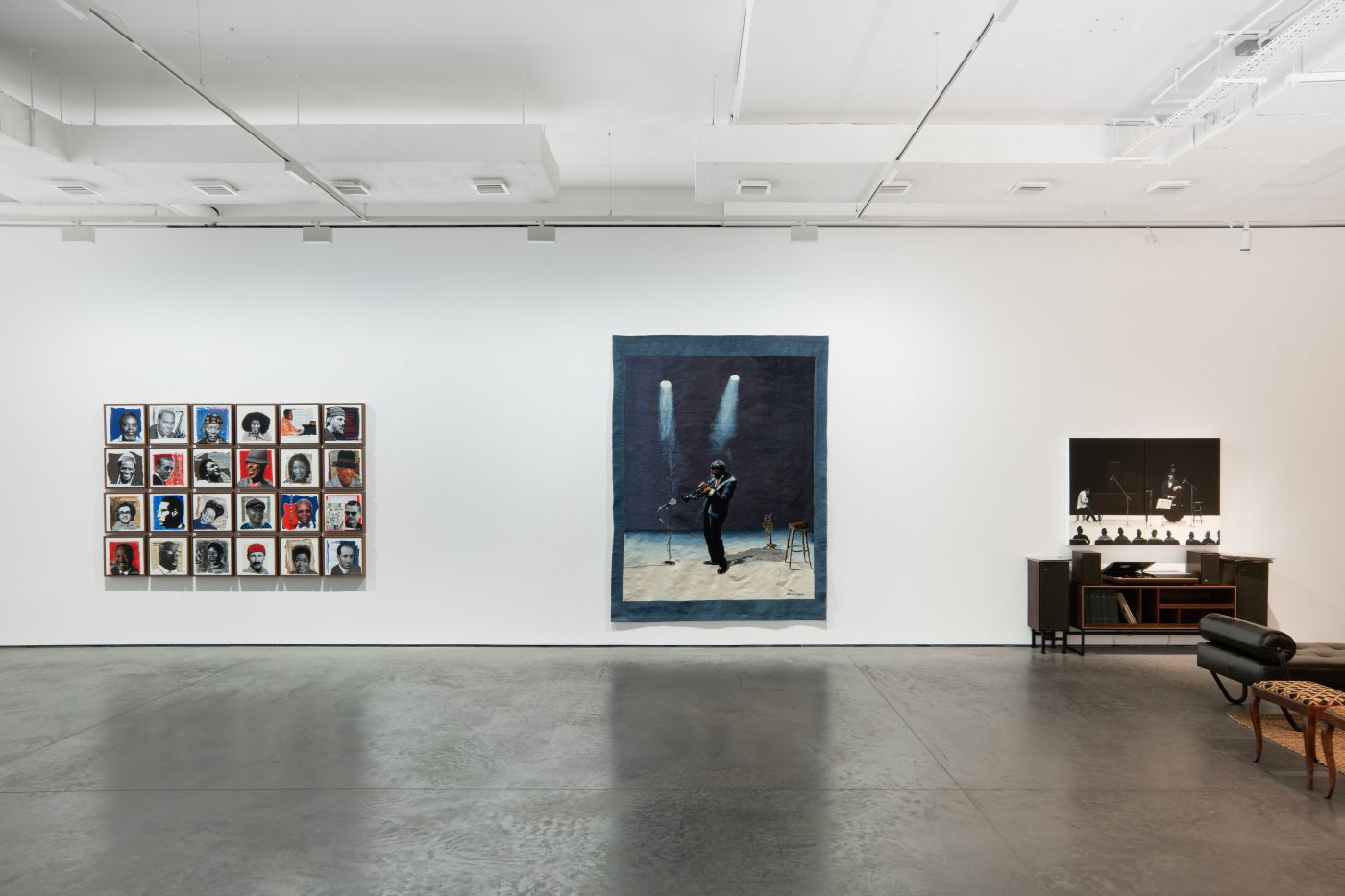 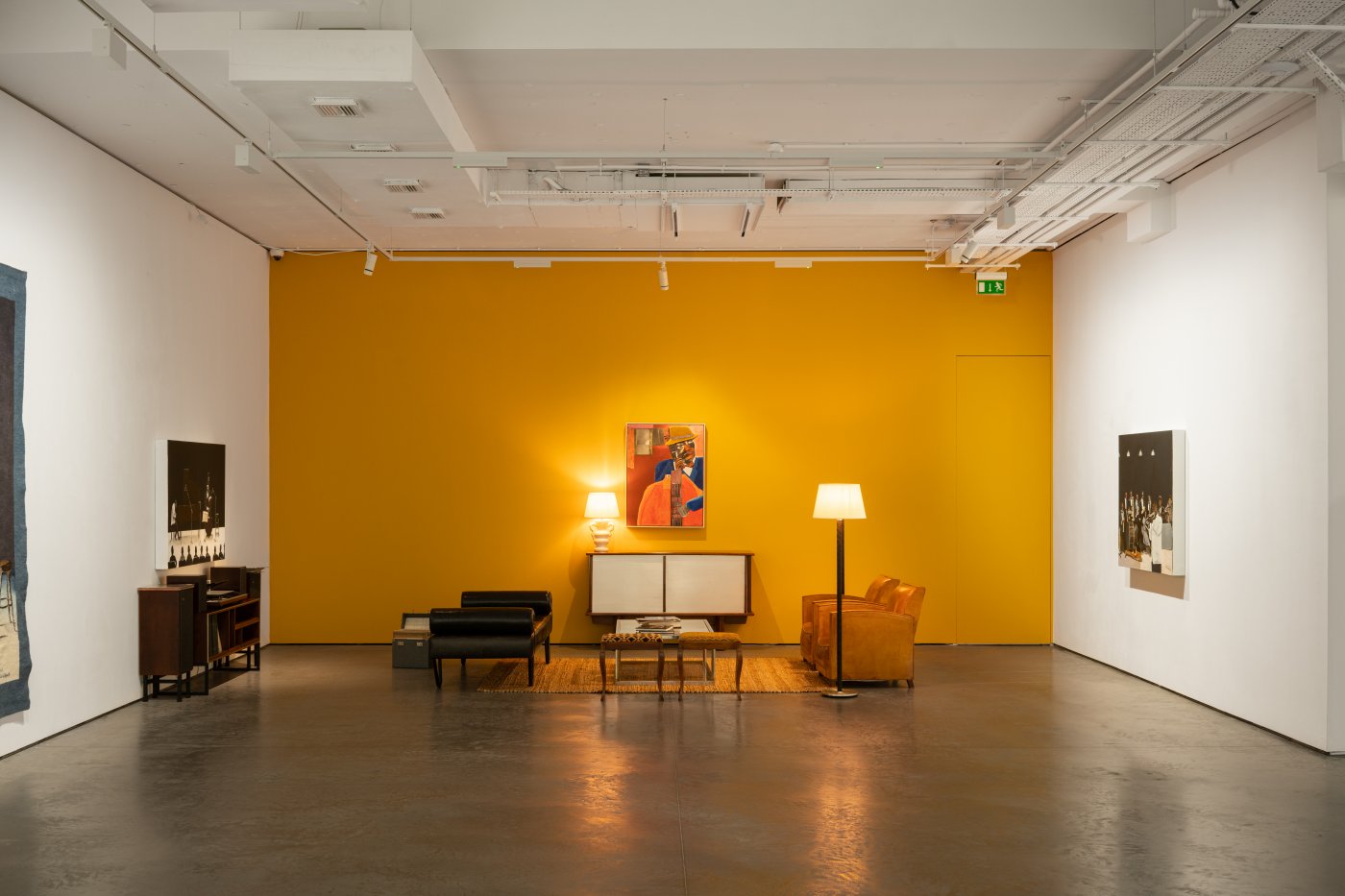 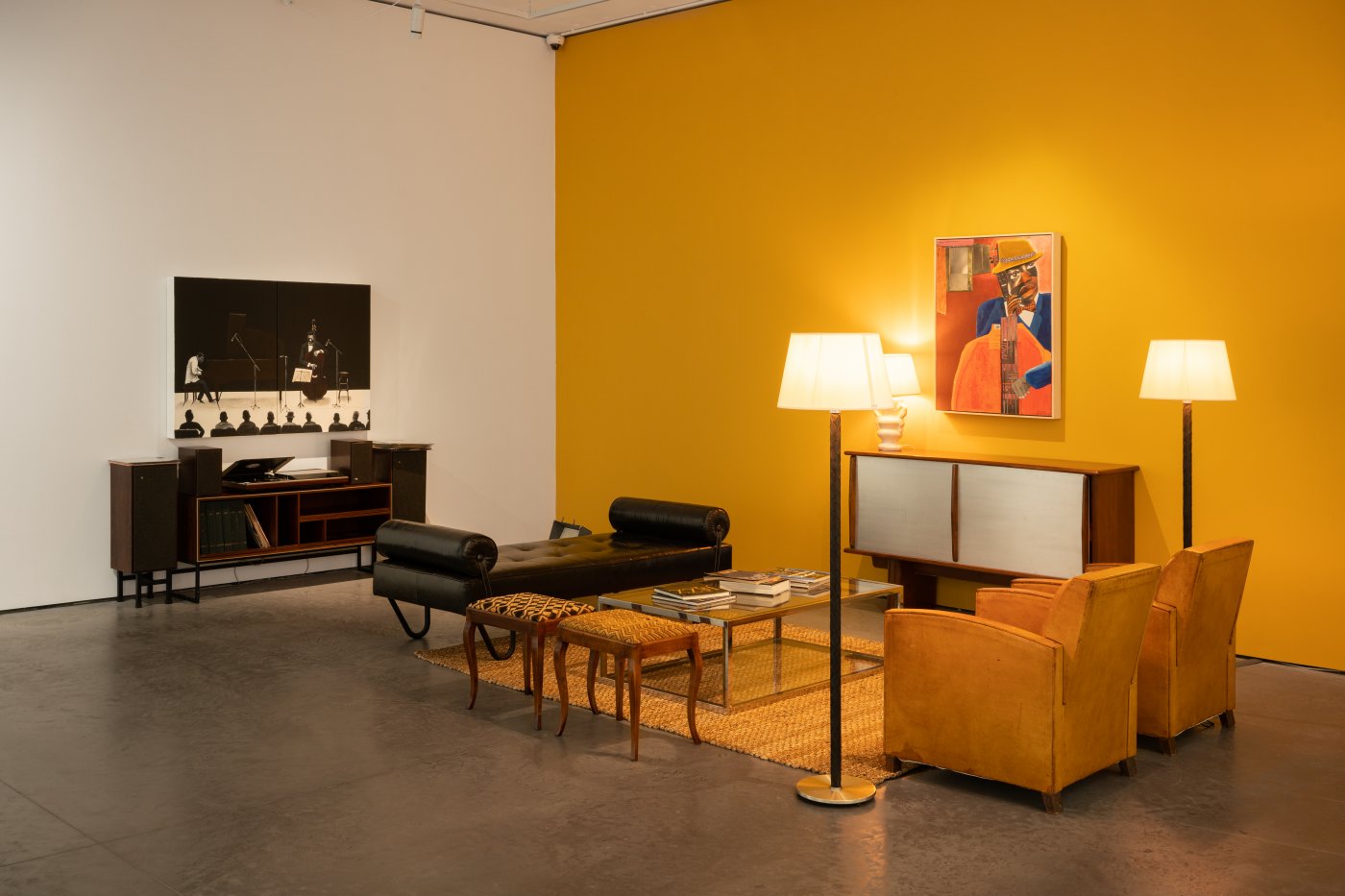 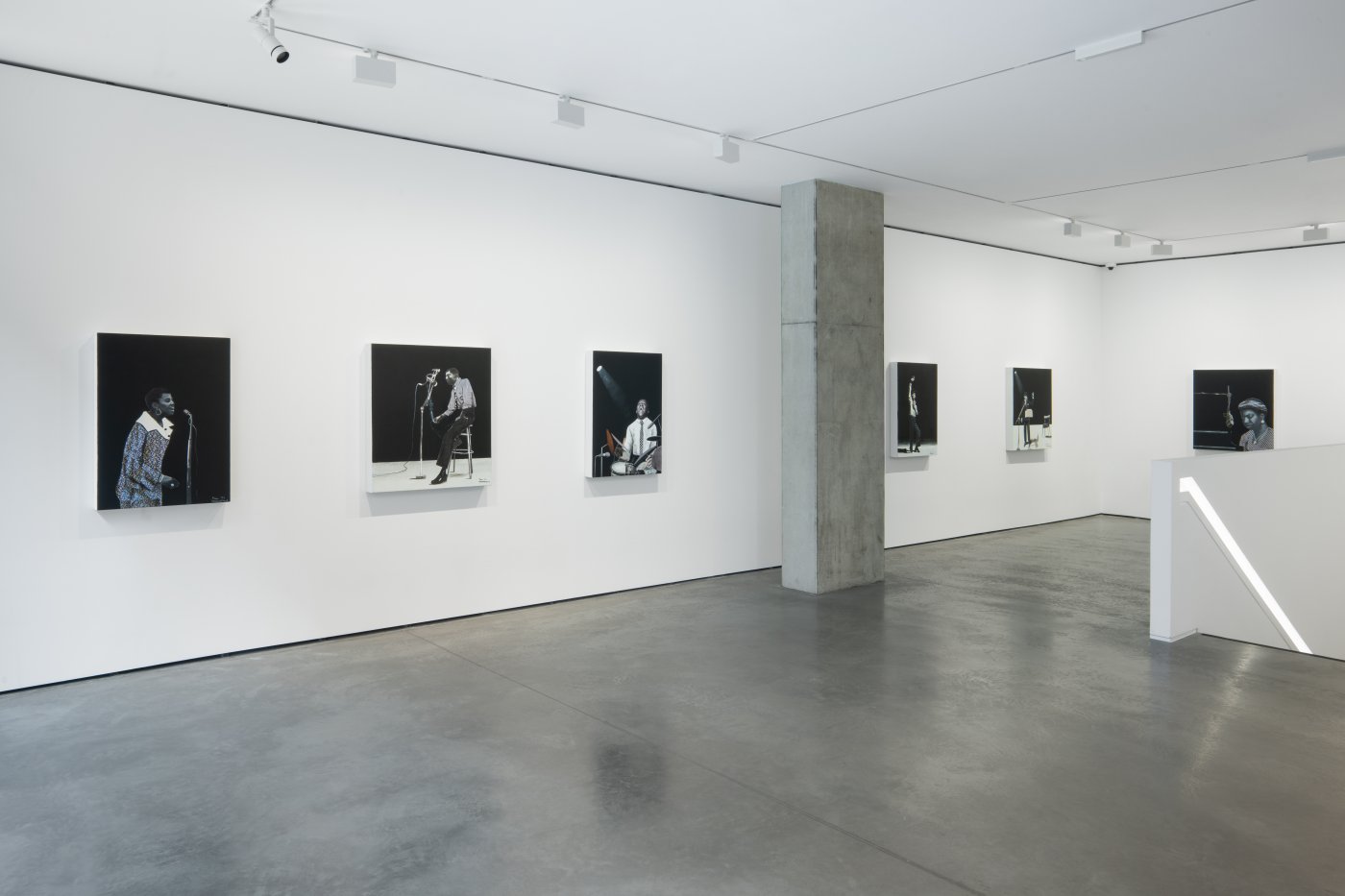 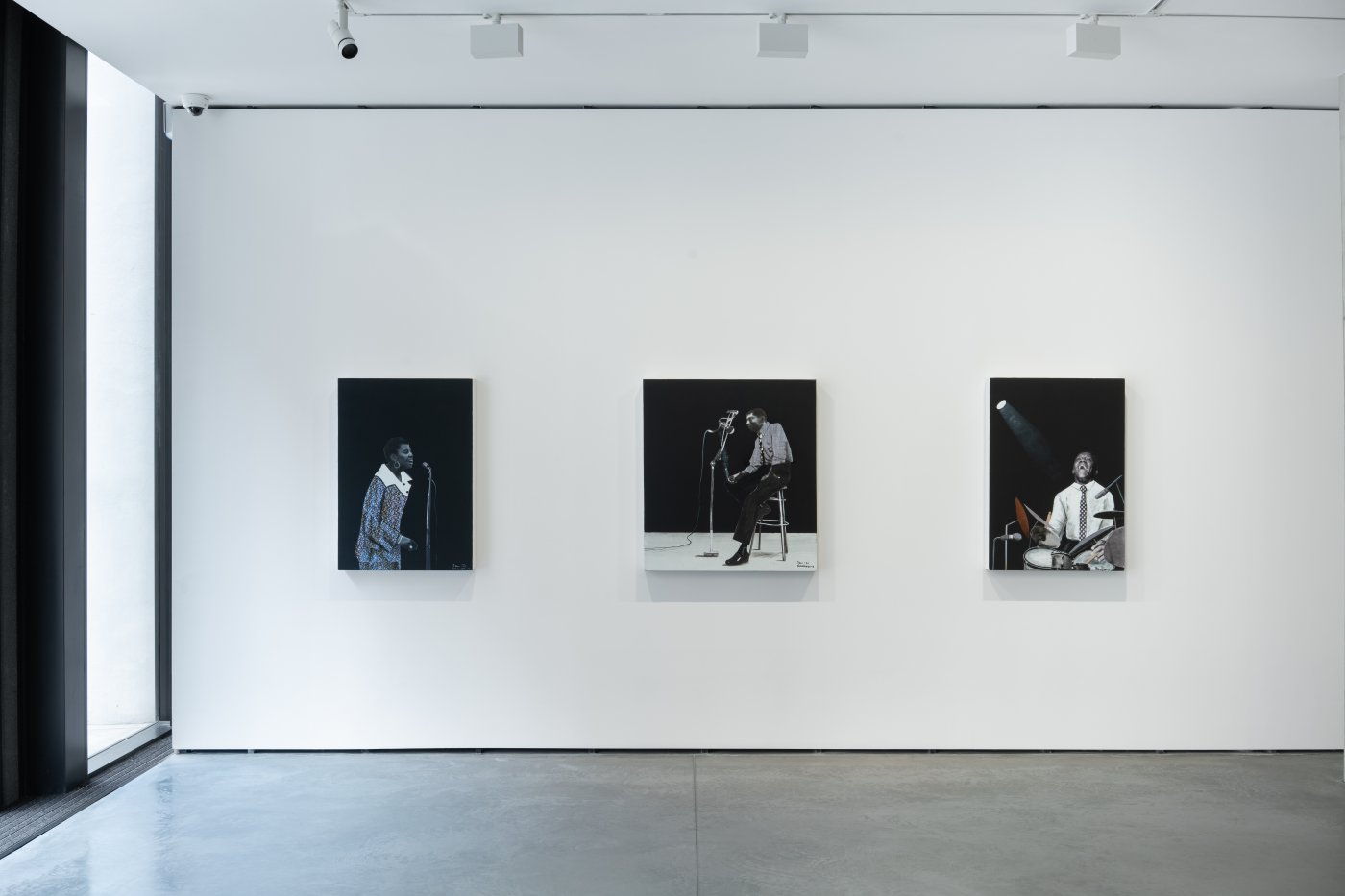 Over the course of his career, Nhlengethwa – dubbed by critics “one of the country’s most celebrated living artists” – has developed a distinctive collage and painting practice while exploring themes common to everyday life in South Africa, the street life, domestic interiors to the influence of mining. Intrinsic to this practice is Nhlengethwa’s love of jazz.

From the age of 15, Nhlengethwa was exposed to the genre through his two older brothers who listened to everything from the classic standards of artists such as Miles Davis and Dave Brubek to the more experimental sounds of Sun Ra, Eric Dolphy and Charles Mingus, to name a few.

“My life belongs to the jazz world because I don’t spend a day in my studio without listening to jazz in the background,” says Nhlengethwa. With a collection of over 4000 vinyls, Nhlengethwa views his records as “art material”, likening the experience of listening while working to a dialogue. “I don’t think I could be who I am, what I’m doing in the art world, if there was no jazz. It is my daily inspiration.”

Prominent jazz musicians have regularly featured in Nhlengethwa’s work over the years. This time around, the artist has widened his scope to incorporate both jazz and blues artists, bringing to the fore previously overlooked historical figures such as Johnny Lee Hooker and BB King.

For Nhlengethwa, this decision reflects his desire to display the full extent of his inspirations. In keeping with this, Jazz and Blues at Night features the first ever public display of pages from Nhlengethwa’s sketchbooks dating back to the 1980s. These drawings form a sort of note taking for Nhlengethwa who would carry along his sketchbooks wherever he went, finding inspiration in jazz clubs, restaurants and buskers on the street. The selected sketches represent over a decade’s worth of these drawings, which themselves served more as ideas for Nhlengethwa than actual blueprints for his work.

Presented alongside these sketches, Nhlegethwa has scanned and reproduced 30 of his favourite vinyl covers. Presented as an installation, the album display highlights the longstanding association between jazz and visual art. Here Nhlengethwa further contextualises his own entrypoint into this storied tradition, which includes among others a Wynton Marsalis cover created by one of Nhlengethwa’s artistic forebears, Romare Bearden, as well as a watercolour by Walter Williams for a Cannonball Adderley album.

The sketches and vinyl installation provide context for Nhlengetha’s accompanying lithographs, mixed-media collages and tapestry works. In Kind of Blue, Nhlengethwa celebrates the best selling jazz record of all time through a series of lithographic portraits of the musicians on the album against a blue backdrop. Miles Davis also appears on a pair of tapestries, made together with illustrious South African weaver Marguerite Stephens. Elsewhere Nlengethwa recreates scenes of other iconic groups including among others the Count Basie Orchestra and Louis Armstrong’s band.

Accompanying the works in the exhibition, Nhlengethwa has included the names of the jazz photographers whose images have helped inform many of the works on show. “Without those photographers I wouldn’t be doing what I’m doing,” says Nlengethwa, who credits artistic practice. “My goal is to hold onto that same baton they passed on without dropping it.”

In addition, Jazz and Blues at Night features a listening lounge, conceived in collaboration with Dorian Caffot de Fawes – a specialist dealer in 20th Century Design and Furniture. The room set, styled with key examples of furniture and lighting blending Art Deco and Mid-Century styles, will provide a comfortable setting in which the viewers can be immersed in Sam Nhlengethwa’s renowned jazz vinyl record collection.

More about the artist and exhibition
Sam Nhlengethwa was born in the black township community of Payneville near Springs (a satellite mining town east of Johannesburg) in 1955 and grew up in Ratanda location in Heidelberg. In the 1980s he moved to Johannesburg and honed his practice at the Johannesburg Art Foundation under Bill Ainslie. Nhlengethwa is one of the founders of the legendary Bag Factory, Newtown in the heart of the City, where he used to share studio space with the great artists of this pioneering generation of South African artists, such as David Koloane and Pat Mautloa.

South Africa’s jazz scene flourished in the 50s, 60s and 1970s in the urban spaces of the townships, shaped and created from black suffering and struggle. South African poet Don Mattera described jazz as bringing back “[a] history that was both painful and beautiful, bringing us face to face with giants who came in all shapes and sizes, the ‘dwarfs’ and the ‘walk talls’ blowing mean melodies and drumming up storms … Yes it all happened in ‘Toeka’ – city slickers (klevas and moegoes) doing jazz like it was some kind of escape from the harsh cold-face realities.”

Despite Nhlengethwa’s pioneering role in South African art, his work has received rare visibility in London. A major survey titled Life, Jazz and Lots of Other Things was hosted by SCAD Museum of Art, Savannah, Georgia 2014, touring to SCAD and the Carter Center, Atlanta. Alongside his work has been seen in numerous Biennials from 8th Havana Biennial to 2013 Venice Biennale and more recently at the 2015 Beijing Biennial. The exhibition creates the opportunity for London audiences to discover the work of this influential artist.

Courtesy of the artist and Goodman Gallery