Sarah Entwistle: The knots of tender love are firmly tied

Sarah Entwistle: The knots of tender love are firmly tied 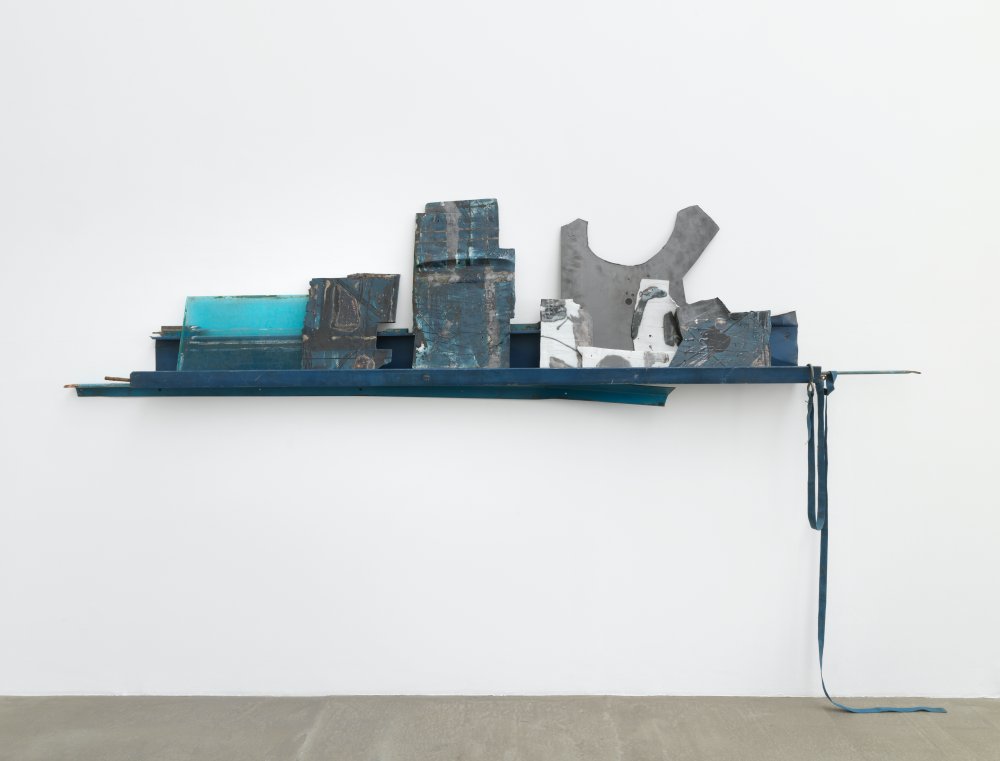 Sarah Entwistle
He lived alone with his books., 2021 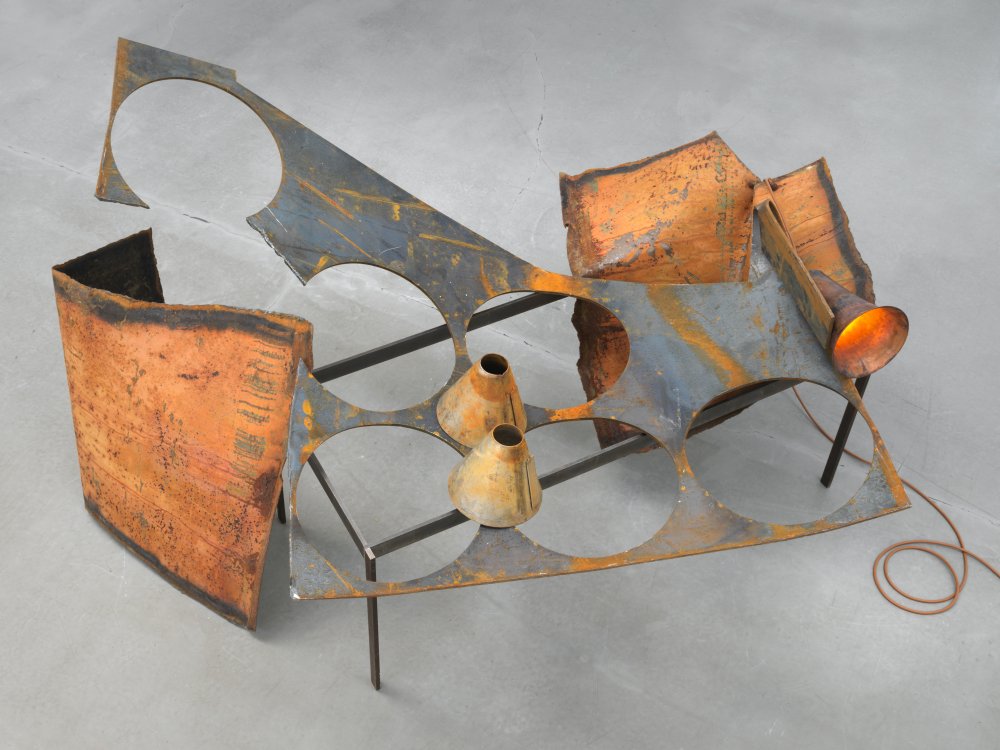 Sarah Entwistle
It is important to know our next move., 2021 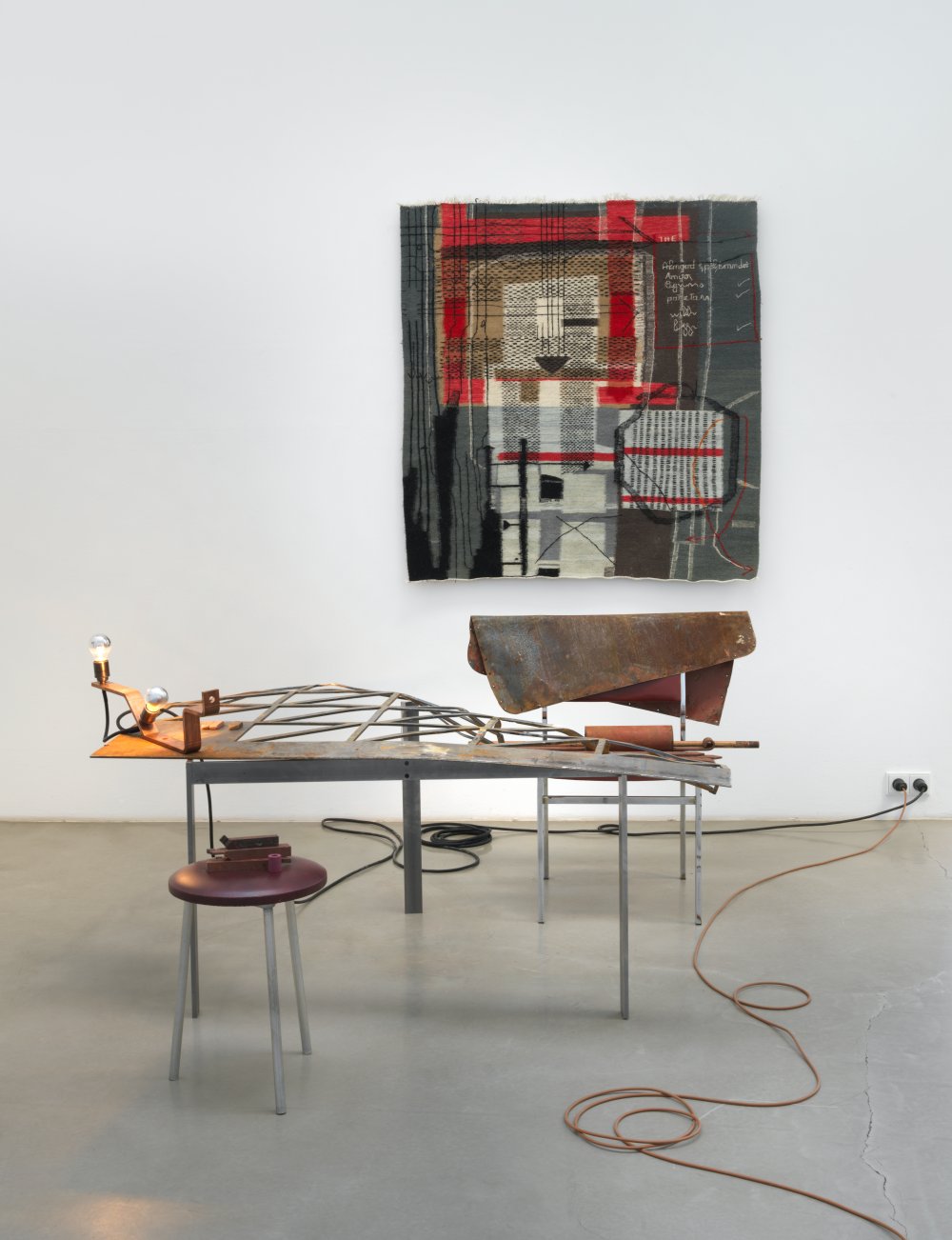 Sarah Entwistle
Actually, I did not intend to take you seriously., 2021 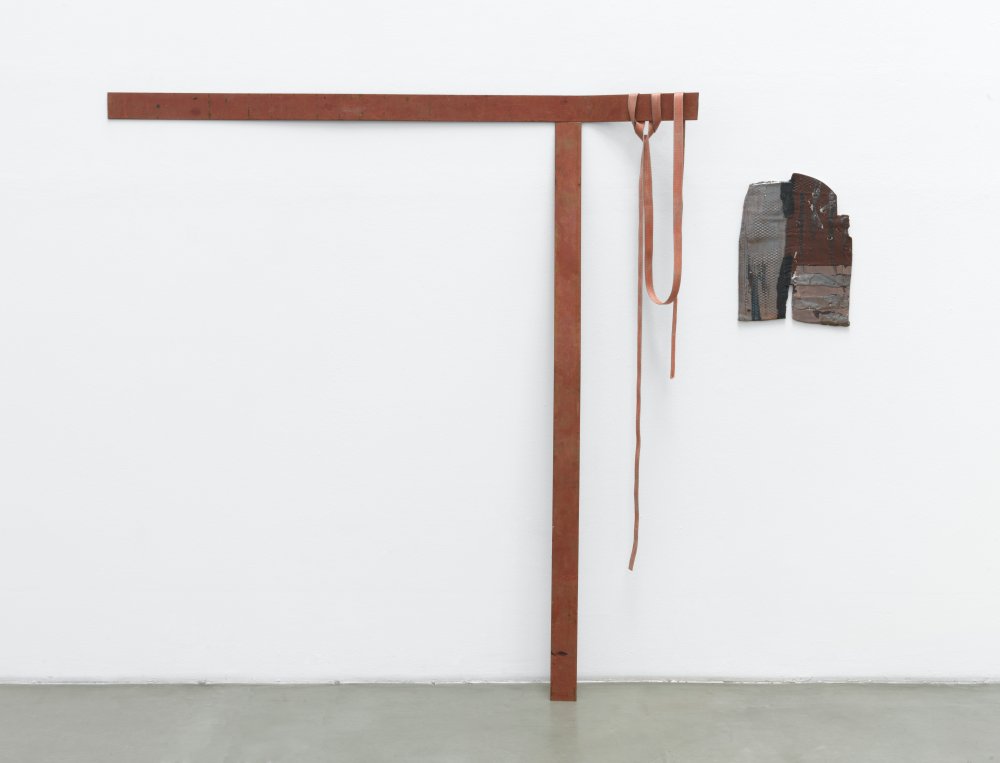 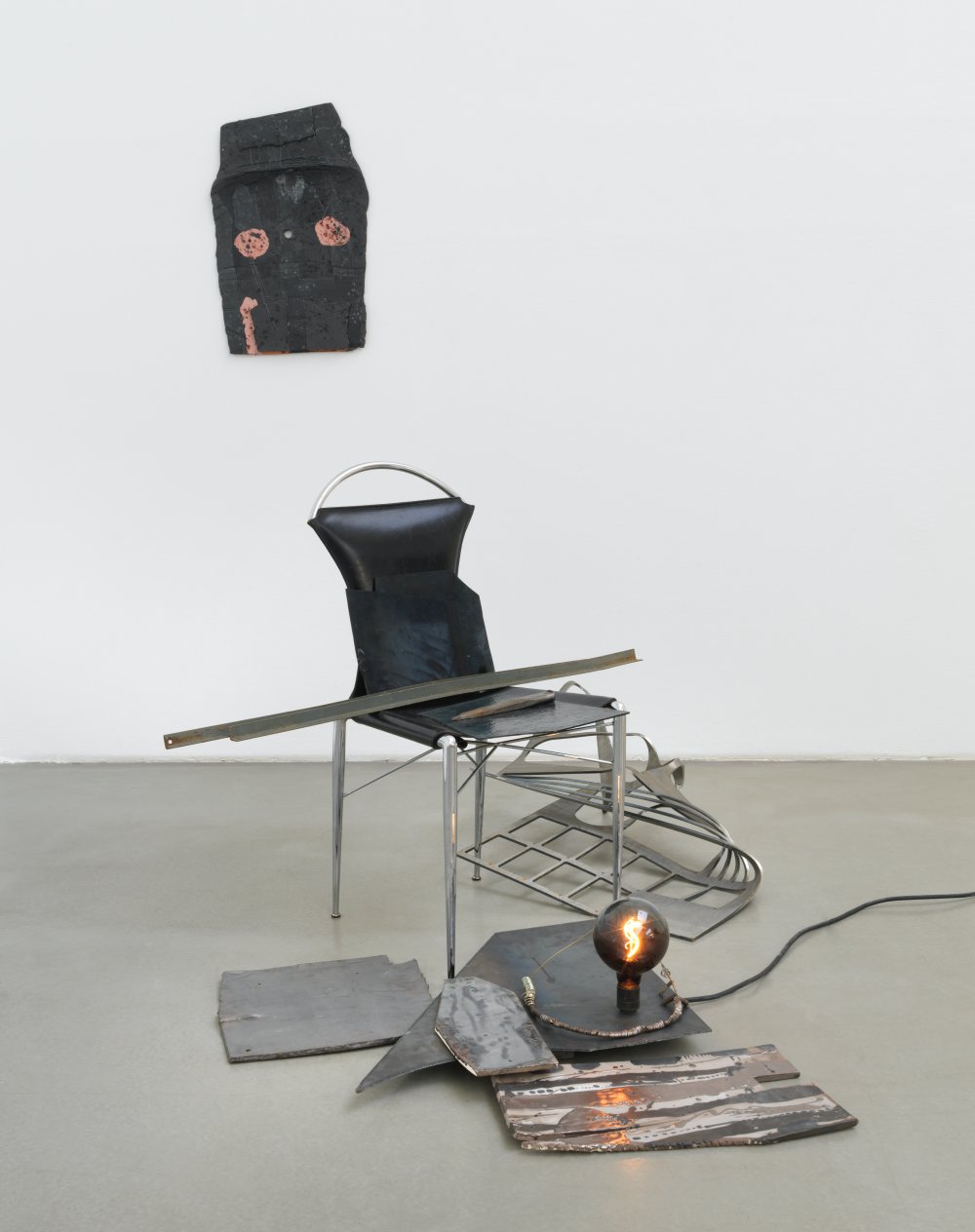 Sarah Entwistle
When I decide that you are lying., 2021 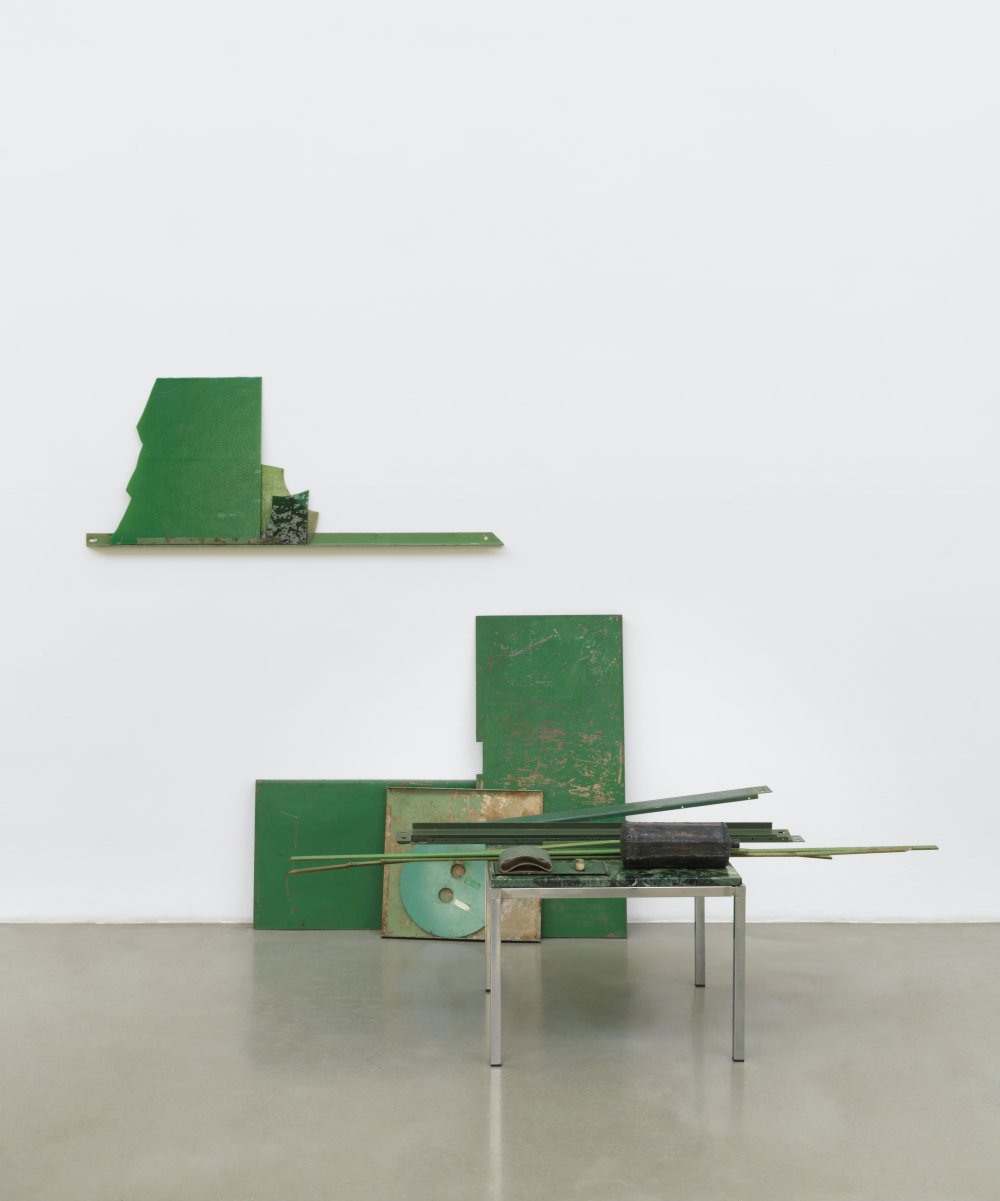 Sarah Entwistle
Her picture of me bares absolutely no resemblance to reality., 2021 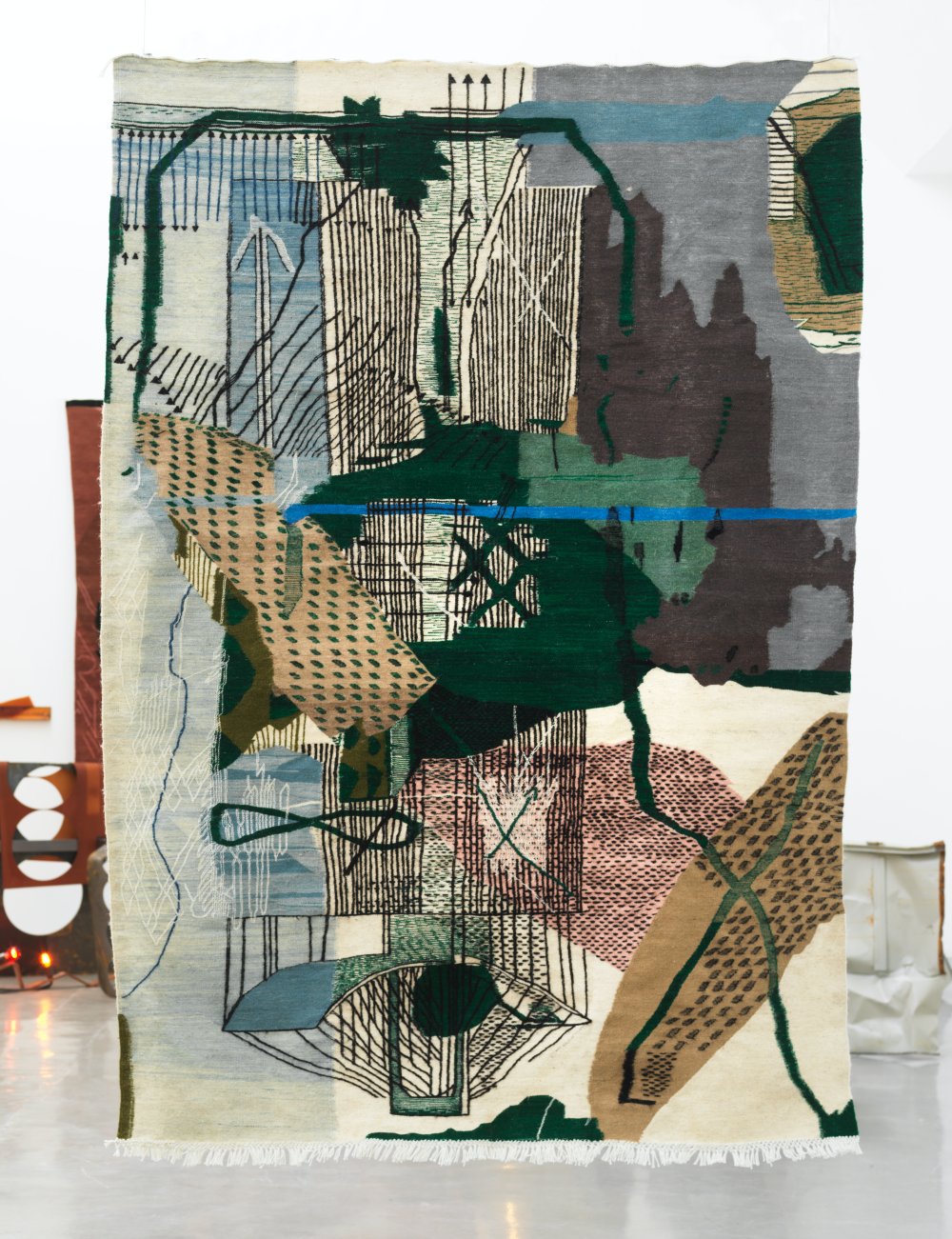 Sarah Entwistle
An architect an his wife arriving in his own rather large airplane., 2021 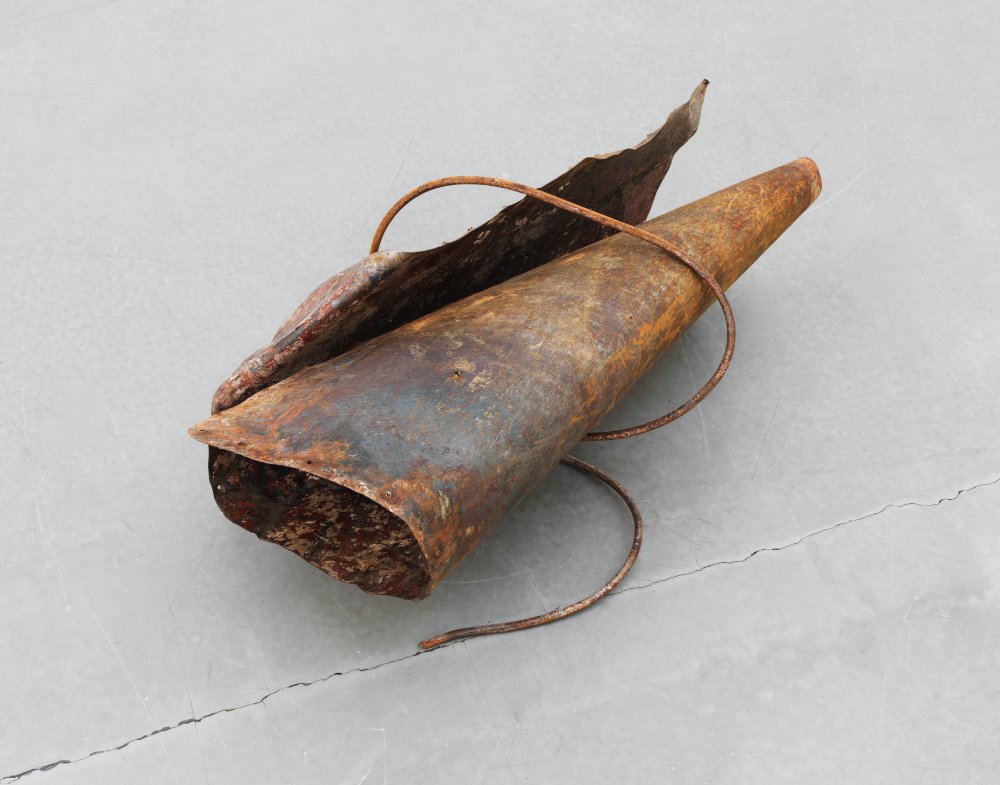 Sarah Entwistle
He picks her up and runs., 2021 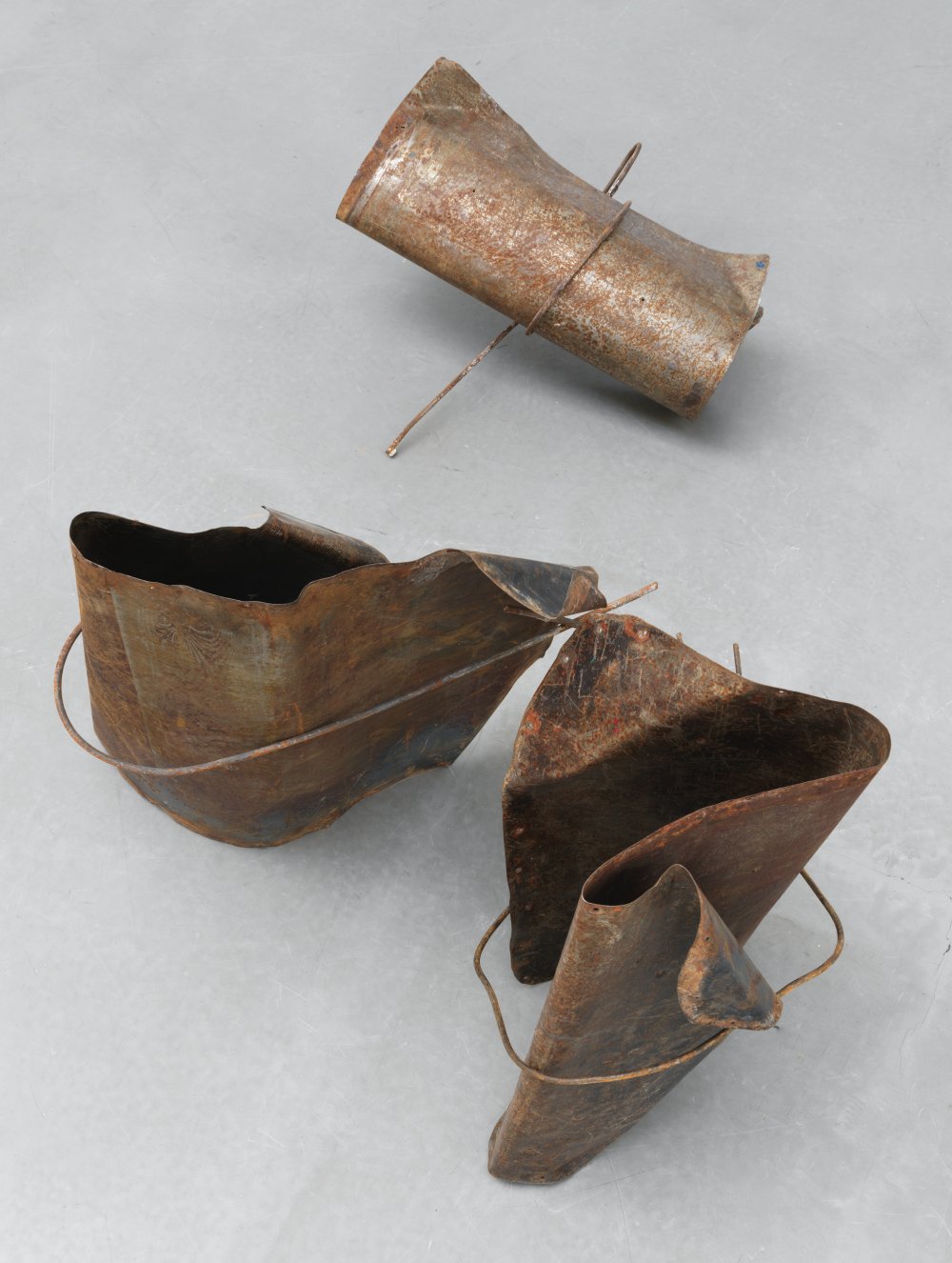 Sarah Entwistle
I just cannot bring myself to work., 2021 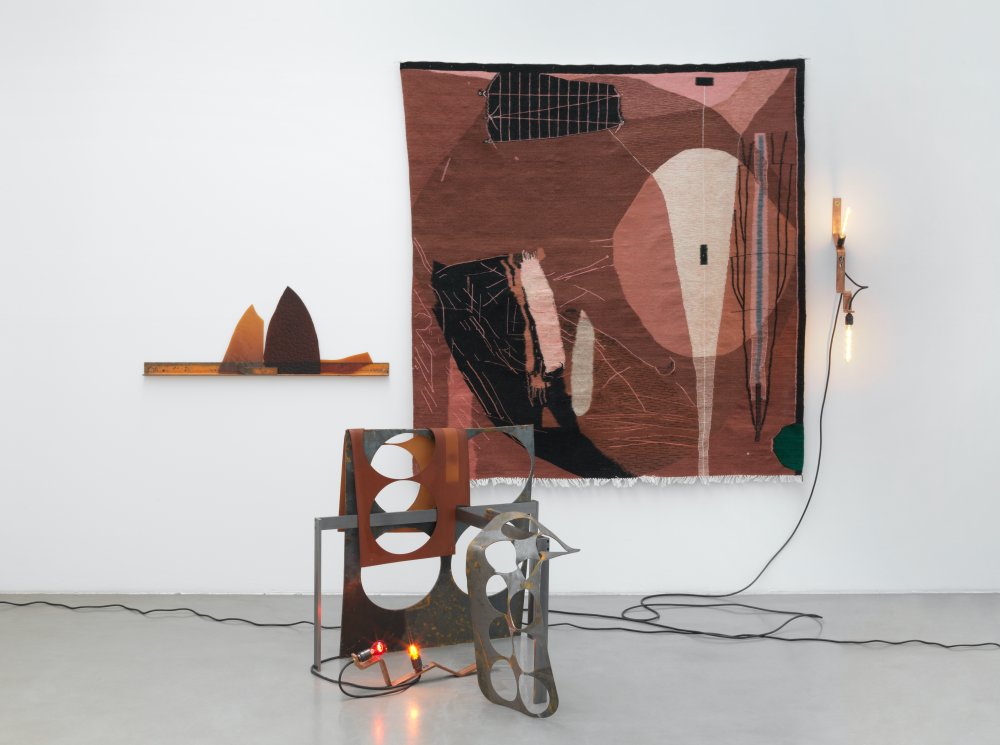 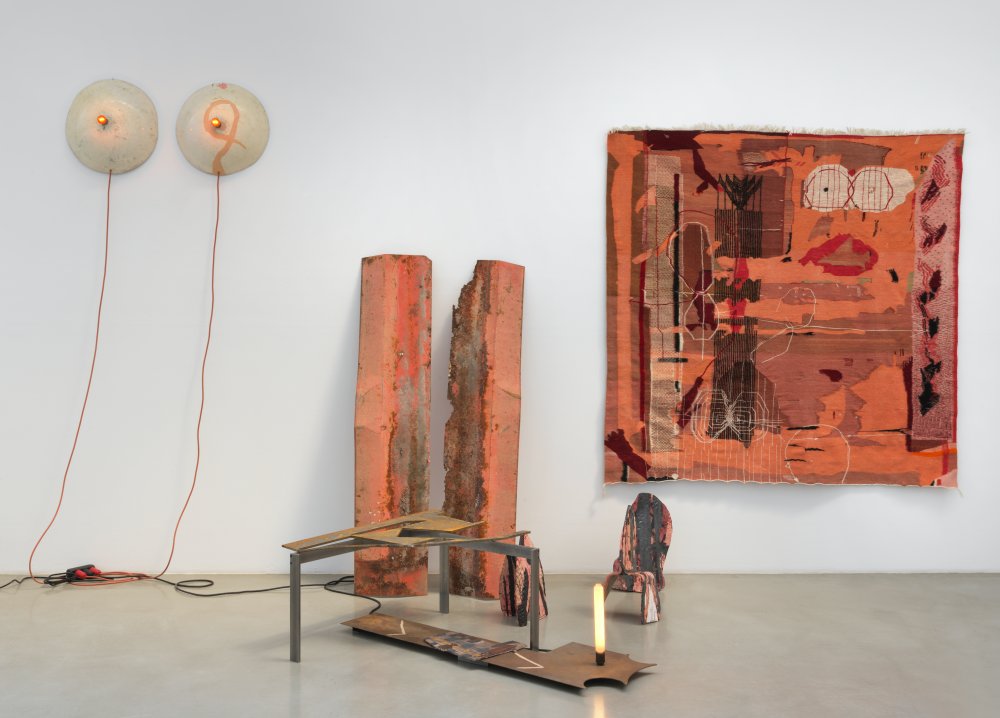 Sarah Entwistle
The tantalizing and ruinous link of the telephone., 2021 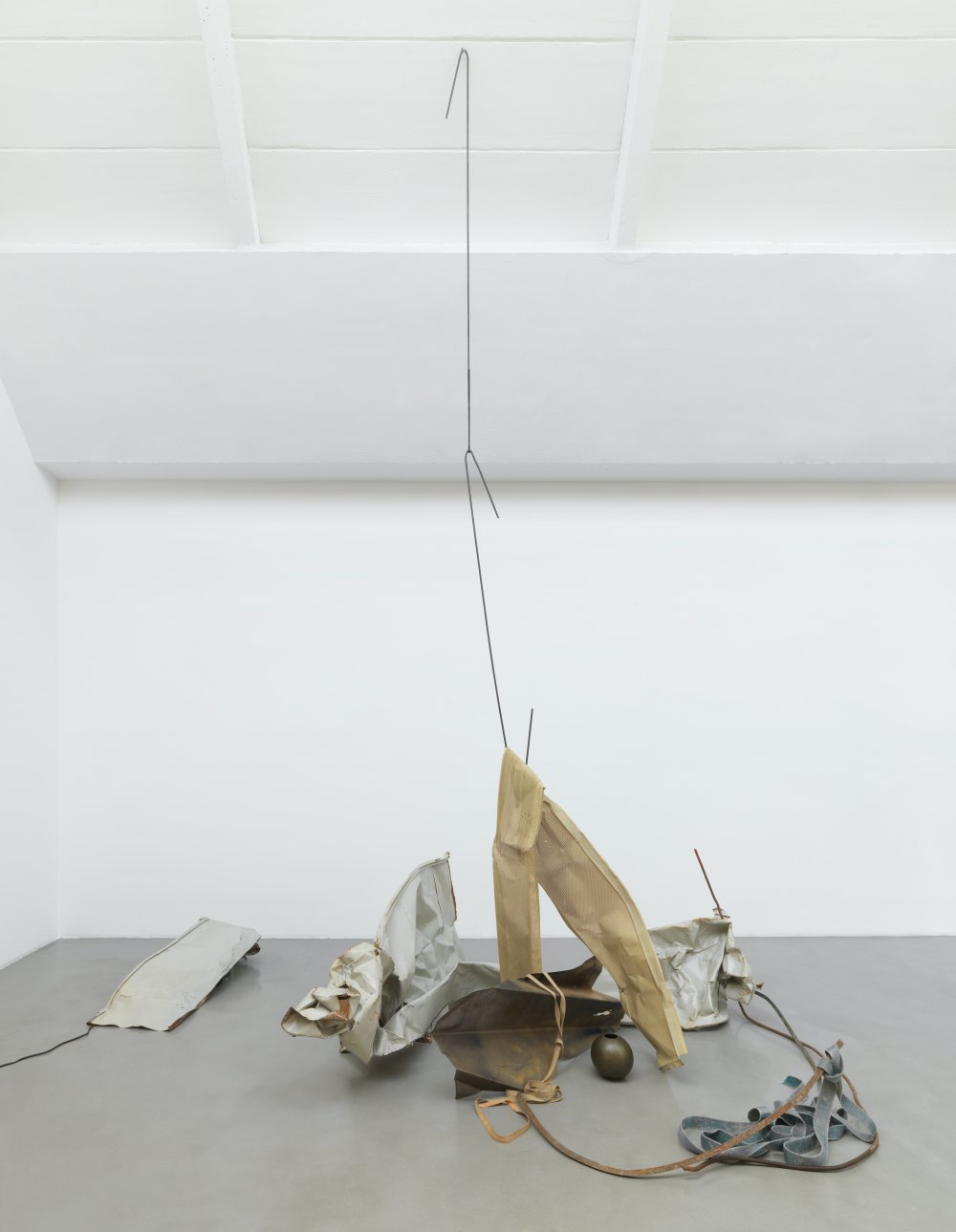 Sarah Entwistle
When I stay at the studio, they look after the cat., 2021 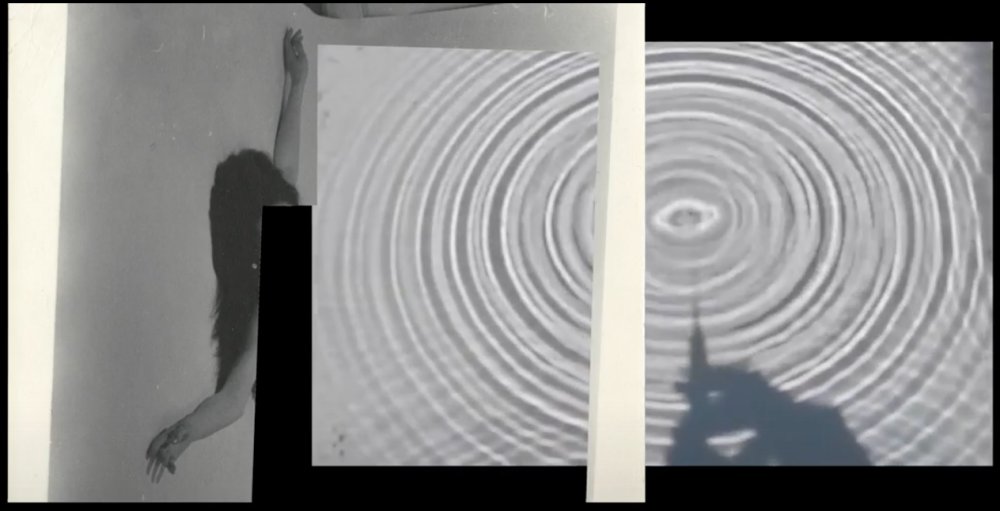 Sarah Entwistle
The dupe of another, 2021 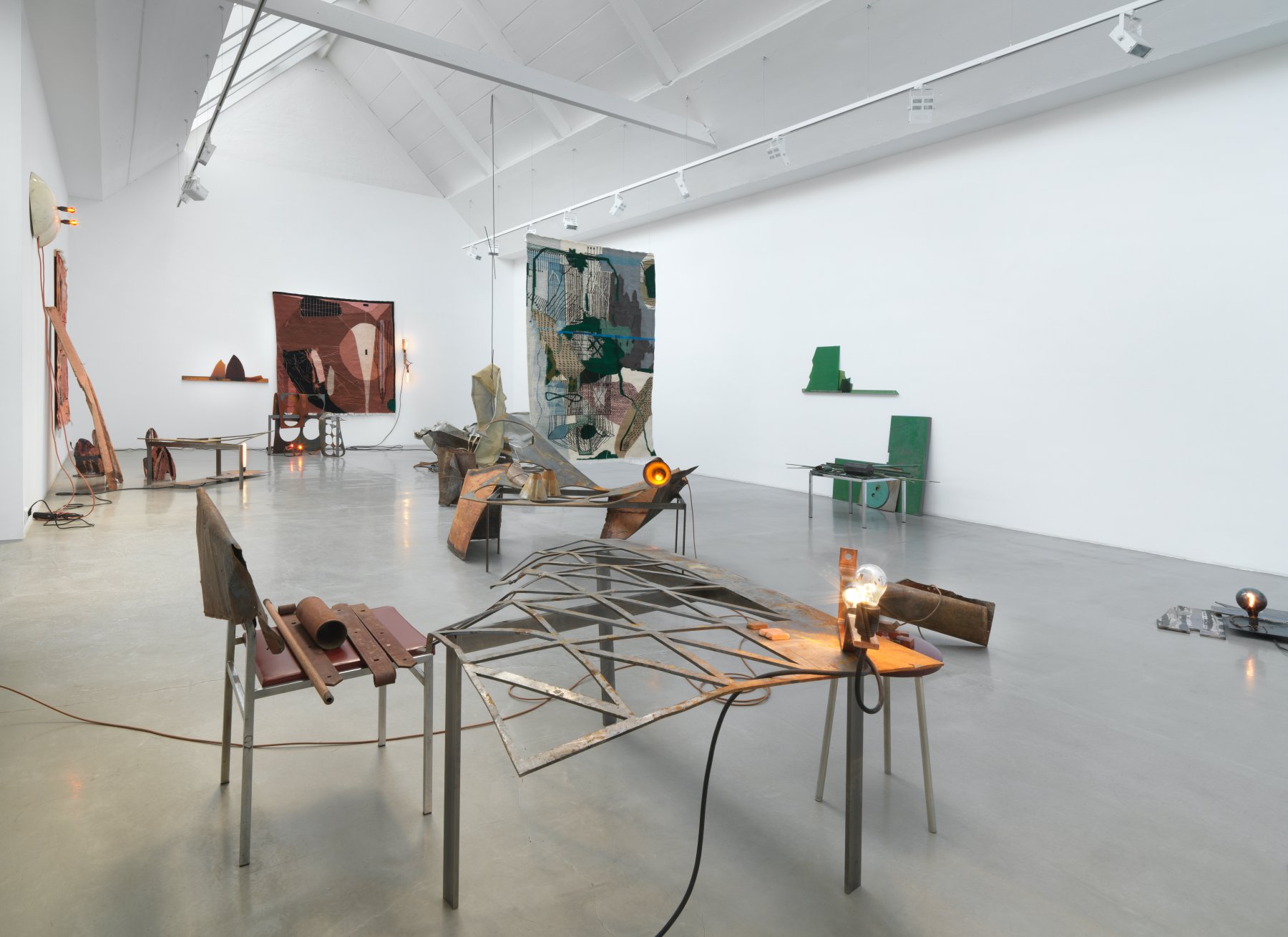 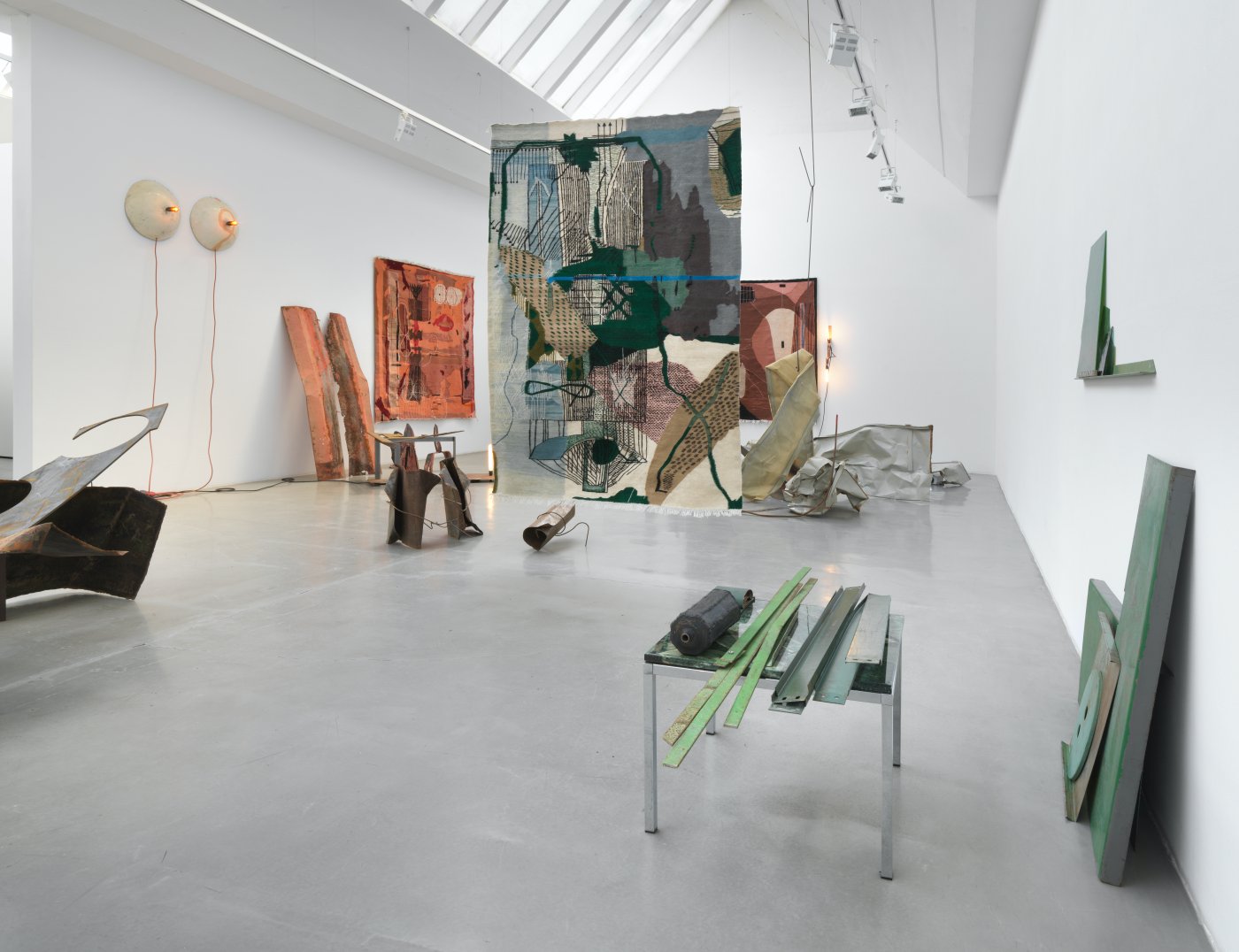 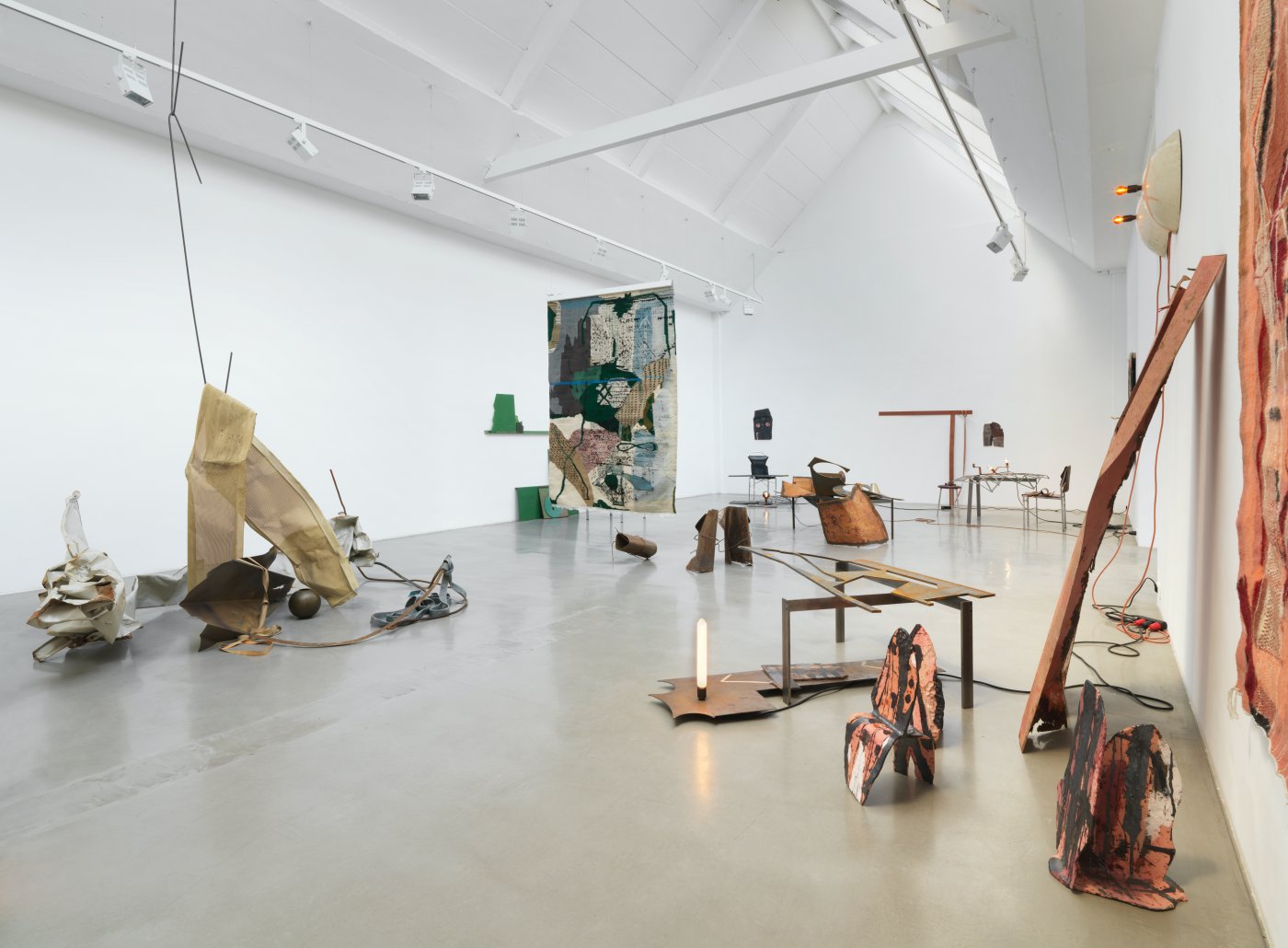 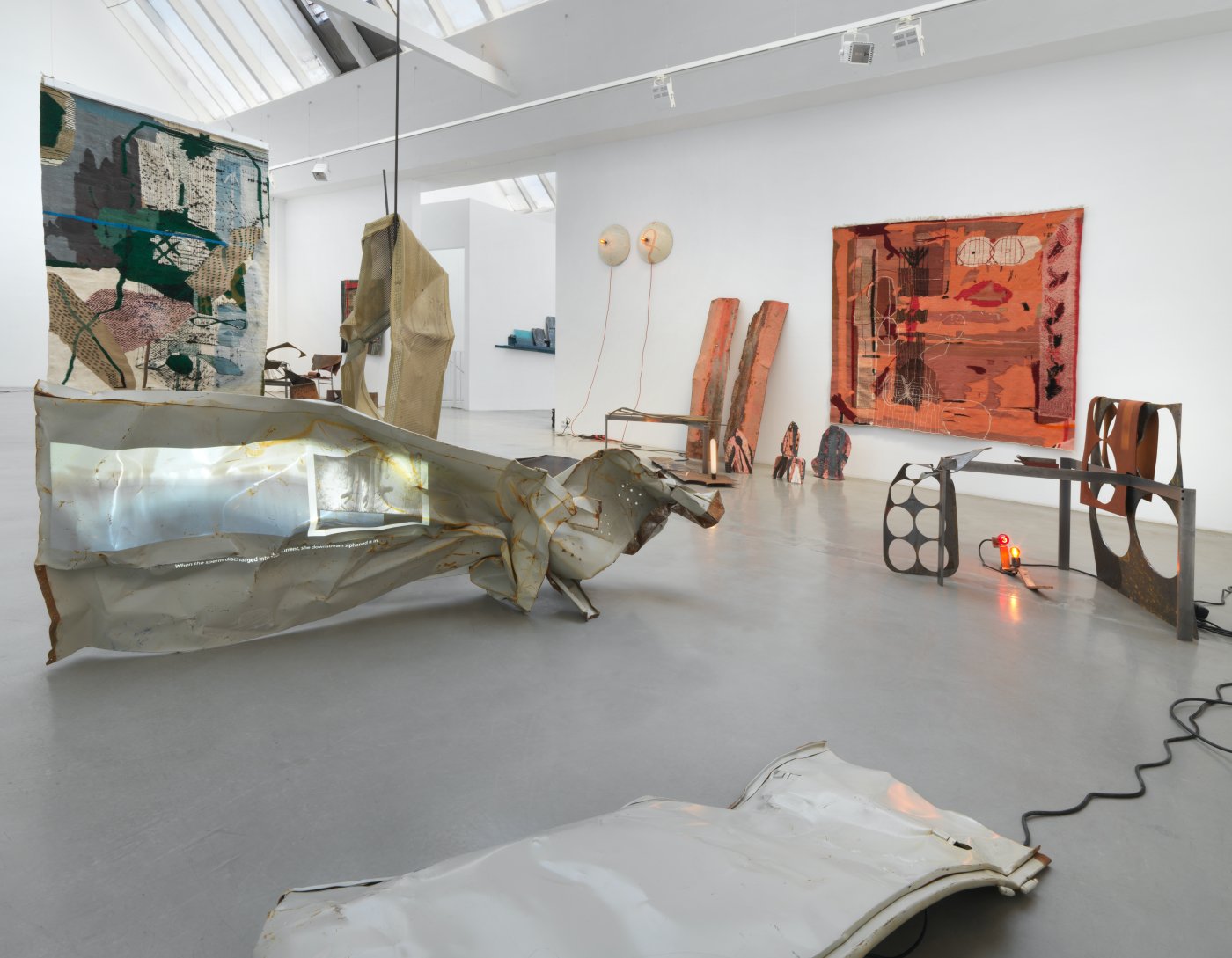 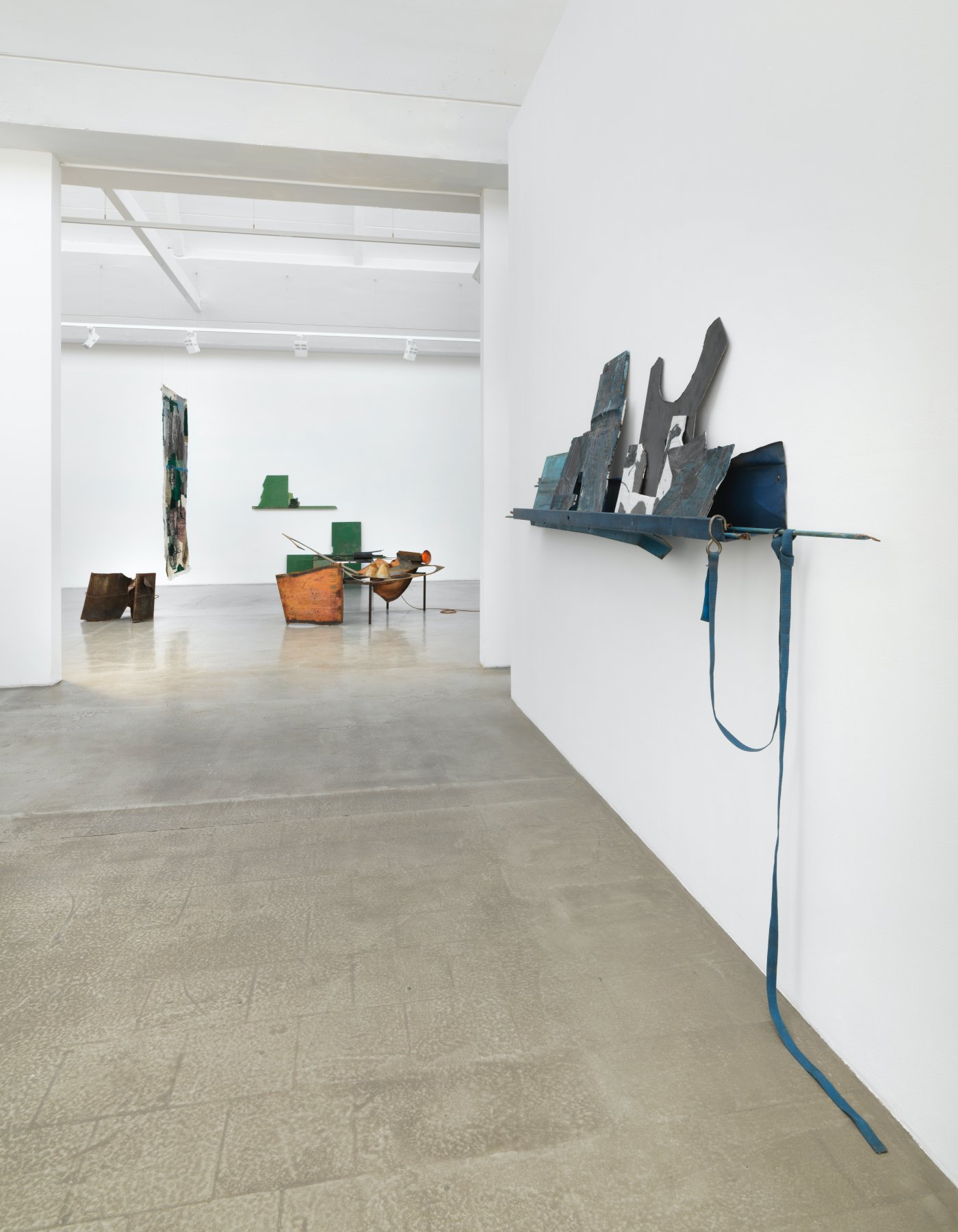 Sarah Entwistle (b. 1979) works across multiple forms and often with found ready-mades to develop sculptural arrangements that recall interior still-lives. These assemblages take their visual and conceptual cues from the informal archive of her late grandfather, architect Clive Entwistle (1916-1976) a manipulative figure whose numerous female lovers were drawn into often masochistic dynamics. In her first solo exhibition in Berlin Entwistle continues with the practice of spoliation in its expanded form, of borrowing and adaptive re-use of material from earlier constructs. Her extended practice, a form of inter-generational processing both literal and metaphysical, is presented here through the accumulation and assembly of sculptural elements, video, figurative sketches, and woven tapestries. A collection of metal offcuts, industrial scrap, and crushed steel shelving units sit in still-life together with hand woven tapestries, ceramics and lighting elements that allude in scale, form, and composition to a domestic interior arrangement. A recurring motif of hands, seen as the conduits for caring and the cat’s paw knot as the allegorical structure of inter-generational exchange are explored in the video work, The dupe of another, and in figurative studies on paper.

Deeply interested in family systems theory and trans-generational transmission, the artist, who trained as an architect, has committed to an artistic/life practice that will stay bound, however tangentially, in a provocation with the archive material and legacy. In doing so she uses this posthumous dialogue to confront familial narratives that intersect with her own identity as a woman, an artist, and a mother. Entwistle’s studio inhabits the central room of the apartment she shares with her two children in which work and life often collapse into each other. She identifies this experience as a ‘positive fragmentation’ as defined by feminist theorist Lucy Lippard in the 1970’s, in which collage is a lived practice through which the ‘mixing and matching of fragments comes to provide a new whole’. Born through a process of adaptation, resourcefulness and opportunism necessitated in managing this spliced dynamic, now heightened, between domestic labour maternal caregiving, and creative work. The exhibition title, adapted from an erotic poem written by her late grandfather, further articulates her experience of the tethered partnership between mother and child.

Often critically appropriating formal and compositional fragments such as colour palette, graphic motifs and fabrication details from the archive, she continues to develop an intellectual strategy and an embodied practice. Entwistle creates objects and ‘settings’ which are hybrid in nature and materiality, from metal hangings to steel lamps, large-scale hand-woven tapestries – often through a long-term collaboration with weaver, Kebira Aglaou. Conceptually, the work builds on her interest in “side-materials”, of architectural and design practice (remnants, debris, leftovers). Visually, she brings to surface the strong connection between the works’ textures and the environment they are shown in – their materiality emphasized by being unframed and unmounted. And just as the vast majority of her grandfather’s designs remained unrealized, so too her tableaux play with the realm of architectural function, where what has been consigned to ‘failure’ is reimagined and re-embodied.

In Entwistle’s conversation with the ephemera of the archive, there is a continued reflection on the uneven relationships between architecture, design and the body through the artworks and the environments she produces. With this core impulse of reconfiguration of the archive and the inherited burden contained in the material, she revisits an ancient architectural practice of ‘spolia’ or ‘rediviva saxa’ (reborn stones), as she elucidates in this passage:

I am fascinated with the malleability of materials, and the architectural historical practice of spolia – the appropriation of materials into new forms. My broader project is a continued dialogue and dismantling of the archive of my late grandfather and fellow architect, Clive Entwistle. The contents of his papers reveal a particular, sexually charged dynamic with his favourite subjects – the female presence and the design/architectural body. In many of his photographs, women are presented as ‘soft furnishing’, in compliant, ornamental and suggestive poses in proximity to Clive’s furniture designs. The subplots and habits of his life are woven into my own identity as an architect and woman and the impulse with this on-going project centers on a practice of self-exorcism, channelled through a deconstruction and transformation of this archive.

What Entwistle has embarked on, in other words, is a gradual re-centering and re-claiming of the female muse as an erotic force, explored in both process and content through weavings, ceramics, and objects that are developed from a conceptual tussle with this phallocentric architectural and personal archive. The act of making works with these remnants offers her opportunities to challenge and invert multifaceted, if not accepted, power dynamics. In due course, the handmade singularity of each element renders them counter to purposefulness, function and the standardised and reproducible prototype of high design. Hence, this process of transmutation attempts a form of creative and cultural exorcism: a reckoning with a highly personal history, and a powerful transformation of its legacy.