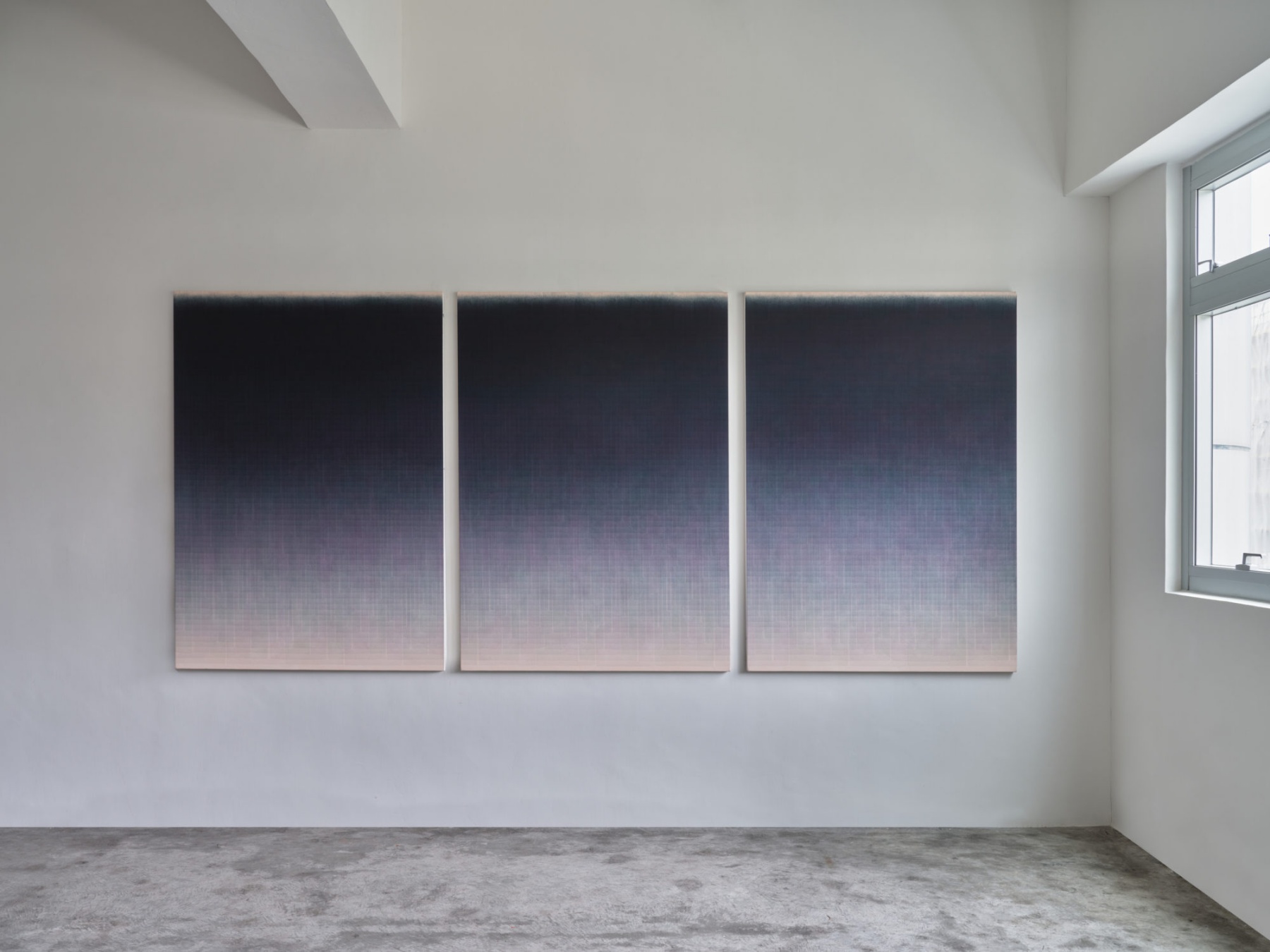 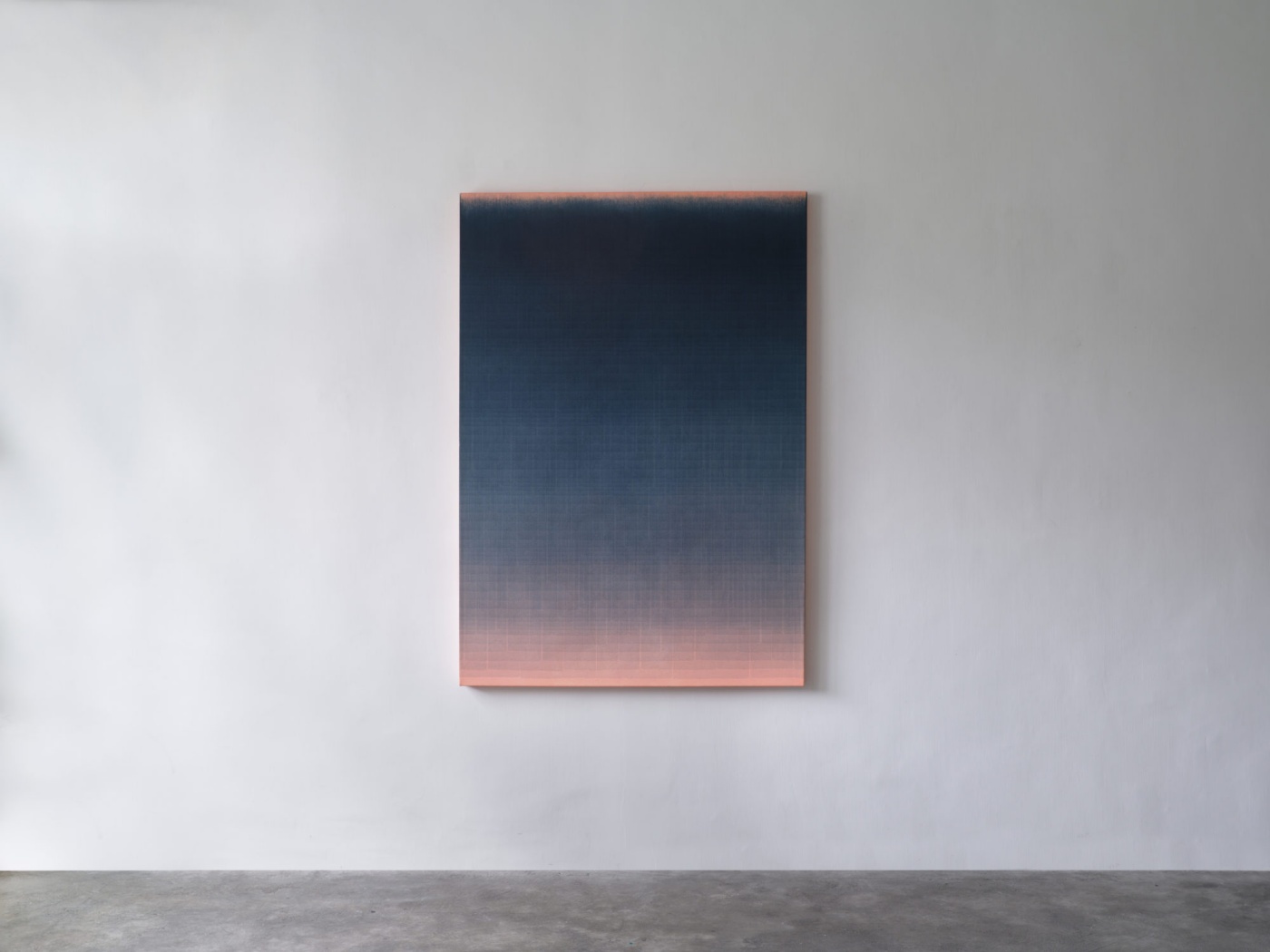 Shen Chen said that the first time he saw a Jackson Pollock painting (Number 10, 1949) was in 1981 in Shanghai, when the Boston Museum of Fine Arts brought a survey of 200 years of American art to China, first to Beijing, then to Shanghai. A groundbreaking exhibition that included twelve abstract paintings, it was only the second presentation of Western painting in the country after the end of the Cultural Revolution and the first to show contemporary American abstraction. Its impact was life-changing for countless Chinese artists who saw it, among them Shen Chen. He said that he was stunned, the connection instantaneous. Very few artists in China were making abstract paintings then and Pollock, Franz Kline, and the Colour Field artists threw open a door for him. “I wanted to make something different from what we were taught to do, something more original, but I didn’t know what, I didn’t know how,” he said, until then. The American abstractionists offered answers to many of the questions he had asked himself, their paintings a revelation, and his face still lights up with excitement as he recalls that indelible moment, four decades ago. But for all their radicality to him as a young Chinese artist, they were also familiar. Pollock’s painting had “a very Chinese feel to it”, and the American’s drip technique, with its rhythmic fluidity and linearity, reminded him of Chinese ink painting and calligraphy while showing a way forward. This particular Pollock painting was subdued in colouration, the roiling black gestures foregrounded, with dimensions that measured roughly 18 x 107 inches, suggesting a kind of ink scroll painting. The combination of the familiar and the unfamiliar, often a catalyst, proved to be such for Shen Chen who, sometime later, began to make his abstract paintings.

When Shen Chen (who is now based in New York and Shanghai) first came to the United States, to Skowhegan, Maine in 1988, he was “culturally shocked”, he said, his rudimentary English at the time also a stumbling block. The artists he met didn’t understand ink painting and he had never seen conceptual art, installation art, video art, or performance before. It was a difficult period but also an invaluable one. He had to rethink what he was going to do, surrounded by so much that was confusing, but he dove in, intrigued, absorbing what was foreign to him, assessing, experimenting, accepting, and refusing, in search of his voice, his resolutions.

Grey has been Shen Chen’s primary colour since he started to make ink paintings while a student in China. But grey for him constitutes two very distinct mediums. One is ink and the infinite gradations of greys that can be achieved by diluting black ink. The other refers to the Western conception of grey as the mix of complementary hues. But Shen Chen never mixes his colours. He wants to make the constituents of his greys clearly visible to his viewers, a visibility that is essential to his process and integral to the meaning of his paintings. With that in mind, he layers his medium — whether ink, gouache, watercolour, oil, or acrylic — in the sheerest of washes over each other, again and again. As the colours physically interact, and as the eye optically blends them, they form a grey without mixing on the part of the artist. While the paintings on view in this exhibition are seemingly more overtly colourful, more intentionally ravishing in their formulation than the austere palettes of other bodies of work, to the artist they are all expressions of grey.

When Shen Chen paints, it might be viewed as performative, meditative. He selects a brush — its width varies as well as the length of the handle — and sweeps it across the canvas, repeating the gesture, rhythmically, deftly, as if he is marking time. His concentration is preternaturally focused, mesmerising to observe. It might be considered his version of action painting, although less exuberantly athletic, inspired by Pollock but also Chinese master calligraphers and ink painters. Shen Chen, in another nod to Pollock and others, prefers to paint on the floor, circling the support. Dipping his brush into his medium, the impress of the stroke depends upon how he loads the brush and wields it. He doesn’t draw his lines but paints them, the fine lines that appear are created by the brush and its edges, as are the patterns and textures. They evoke the delicacy of Agnes Martin’s lines, although, of course, she drew hers. He also applies his brush from all four sides, resulting in a grid, but it is a grid of his devising. It functions, perhaps, more as a net, to capture colour, light, space, and time: his interpretation of an infinity net, perhaps. They might be thought of as a state of mind, a state of being and not primarily based on the formalist aspects of modern reductivism, rational systems, and the renouncing of narrative and figuration. He frequently states that less is more — that, too, not in the canonical modernist sense — and even as he layers his colours, an addition, he is also erasing what is underneath. At the end of the painting, there are only traces, the process.

The process used to make Chinese paintings is far different from that used to make Western paintings, as is the way the painting is parsed, appreciated, Shen Chen said. For instance, he doesn’t look at a painting directly, at its surface. He looks at the painting to comprehend it from inside, from its inner space. It is a more experiential undertaking, and not limited to the retinal. Instead, it is somatic, cognitive, as well as spiritual, subliminal. He is not painting landscapes, although they might summon the sensation of Chinese landscapes, especially in his immersive, horizontally stretched polyptychs. He is searching for something not only beyond landscape but “beyond even abstraction”, something he has not experienced before. “It’s as if you see through your eyes into your innermost thoughts and emotions.” He referred to the concept in Chinese painting that leaves areas blank in a composition, called liu bai (literally leave white 留白). “It might be white in the painting but to me, it is a space and not white at all. And that space, empty and full, can be whatever you imagine.”

These new paintings are resplendent, luminous, often lighter in tone as if composed of air, the ineffable, their advancement and recession equivalent to breathing, adding to their sense of animation, movement. Shen Chen finds it ironic that when he first brought his paintings to China, his work was considered too Westernized while in Europe and the United States, they were considered too Asian. But the times have caught up with him. Surely that kind of categorisation is outmoded by now, emptied of significance in a world that, despite preventative attempts by conservative or authoritarian forces, is more tightly, inextricably linked than ever. What he claimed then, as artists everywhere have always done, was freedom of artistic expression, in his case to explore aesthetic vocabularies that suited and inspired him, to use as he wished. What he wanted to do was to create something of his own. It is based on a life and point of view lived in two cultures, yes, but one that is particularised, nuanced, and not to be defined generically, as evidenced by these quietly dazzling paintings that continue to make clear his uniqueness of vision.