Simone Leigh’s practice incorporates sculpture, video, and installation, all informed by her ongoing exploration of black female-identified subjectivity. Through her investigations of visual overlaps between cultures, time periods, and geographies, she confronts and examines assumptions about the female body, race, beauty, and community. For the artist’s first exhibition with Hauser & Wirth, coinciding with Zurich Art Weekend, Leigh will present all new sculptures, including ceramic busts, raffia skirted figures, and new bronze works. 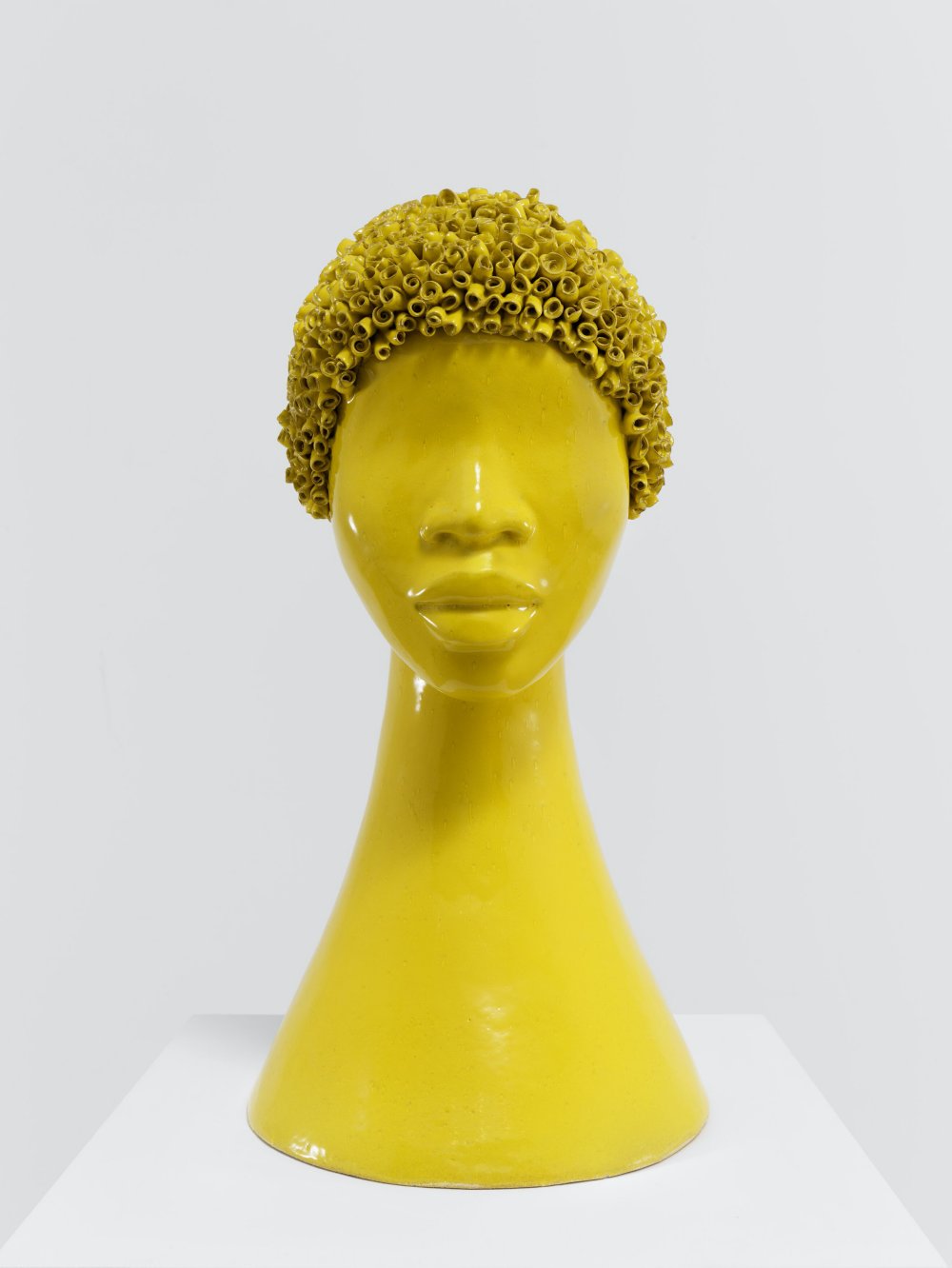 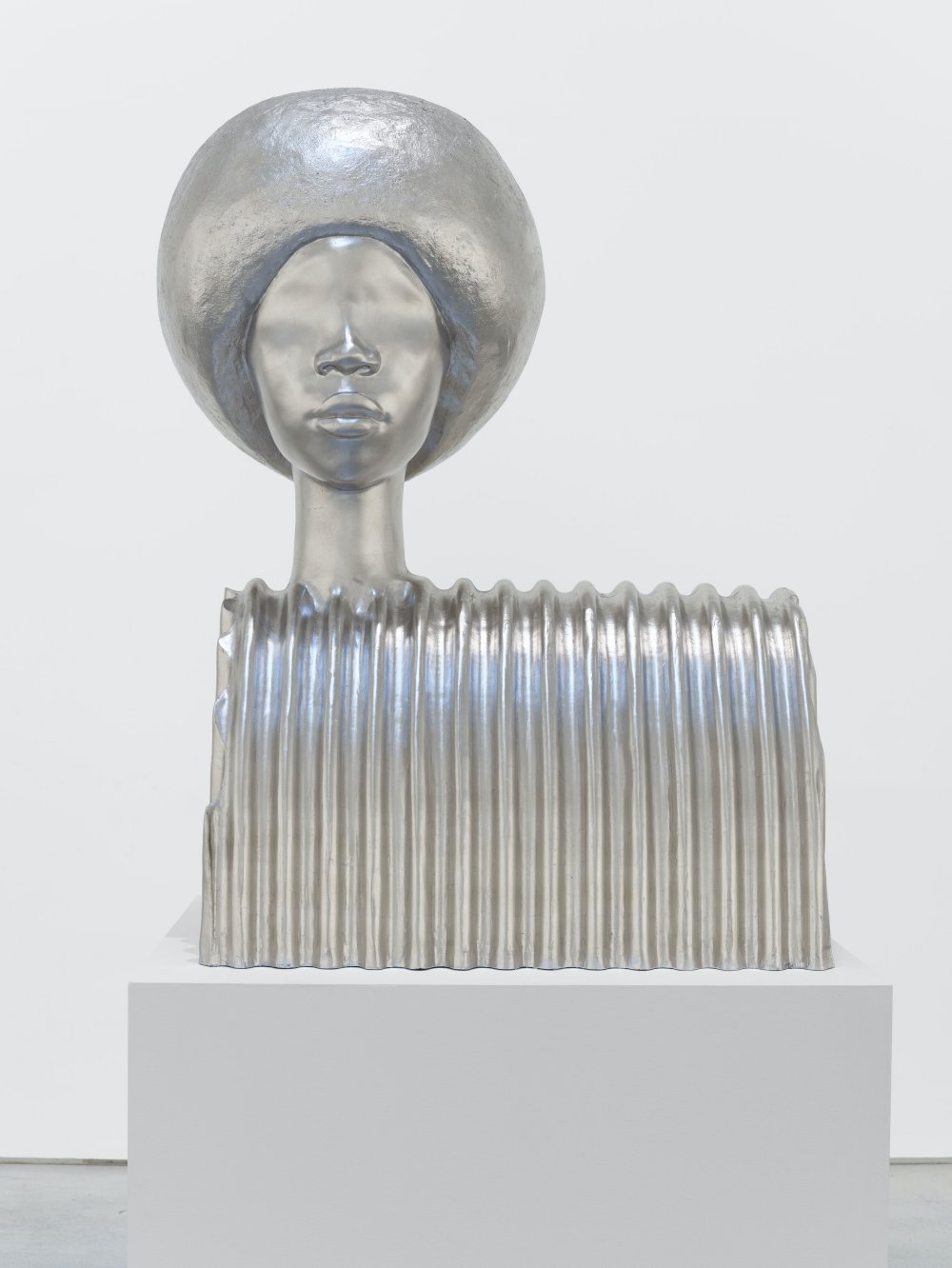 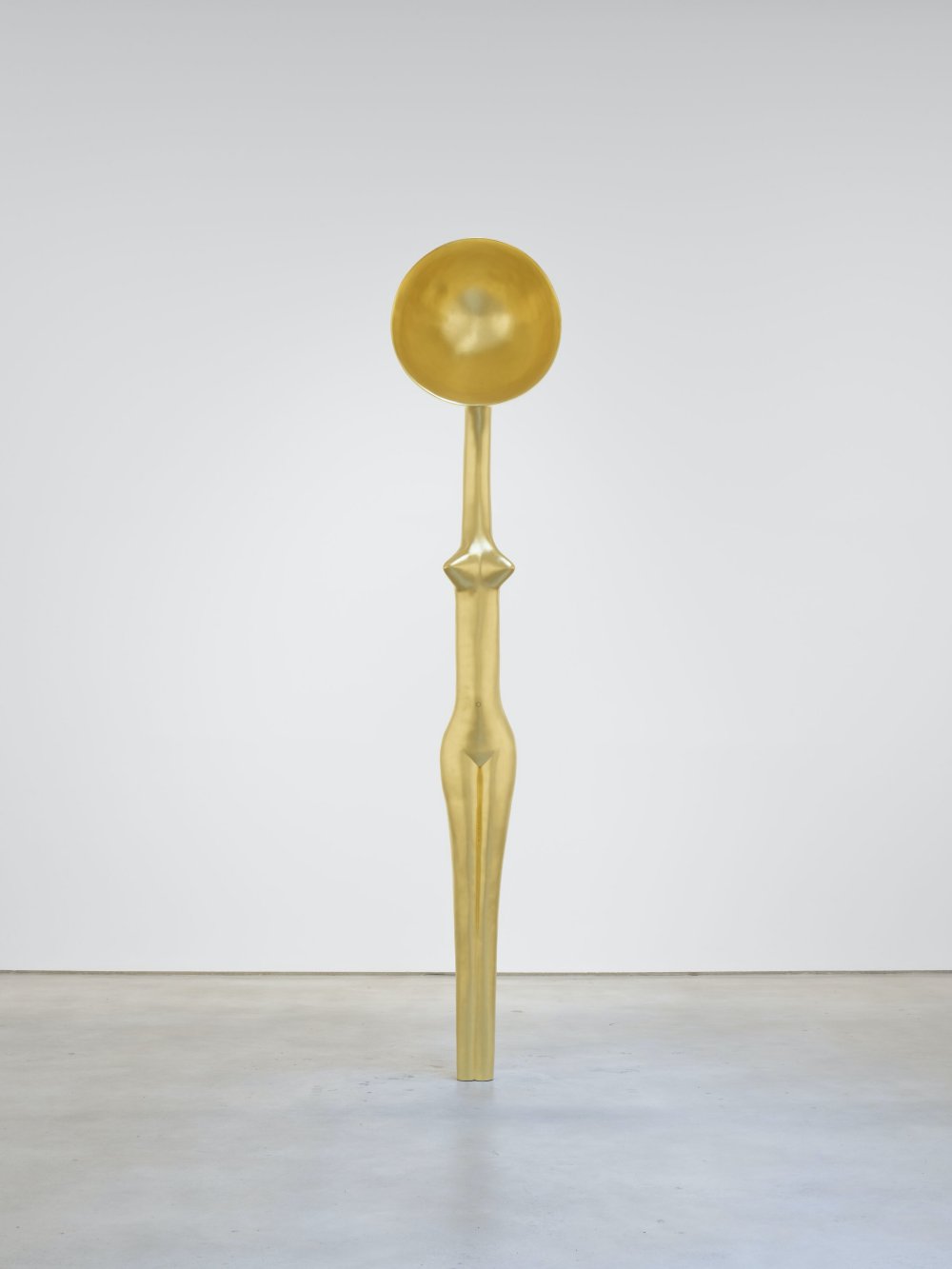 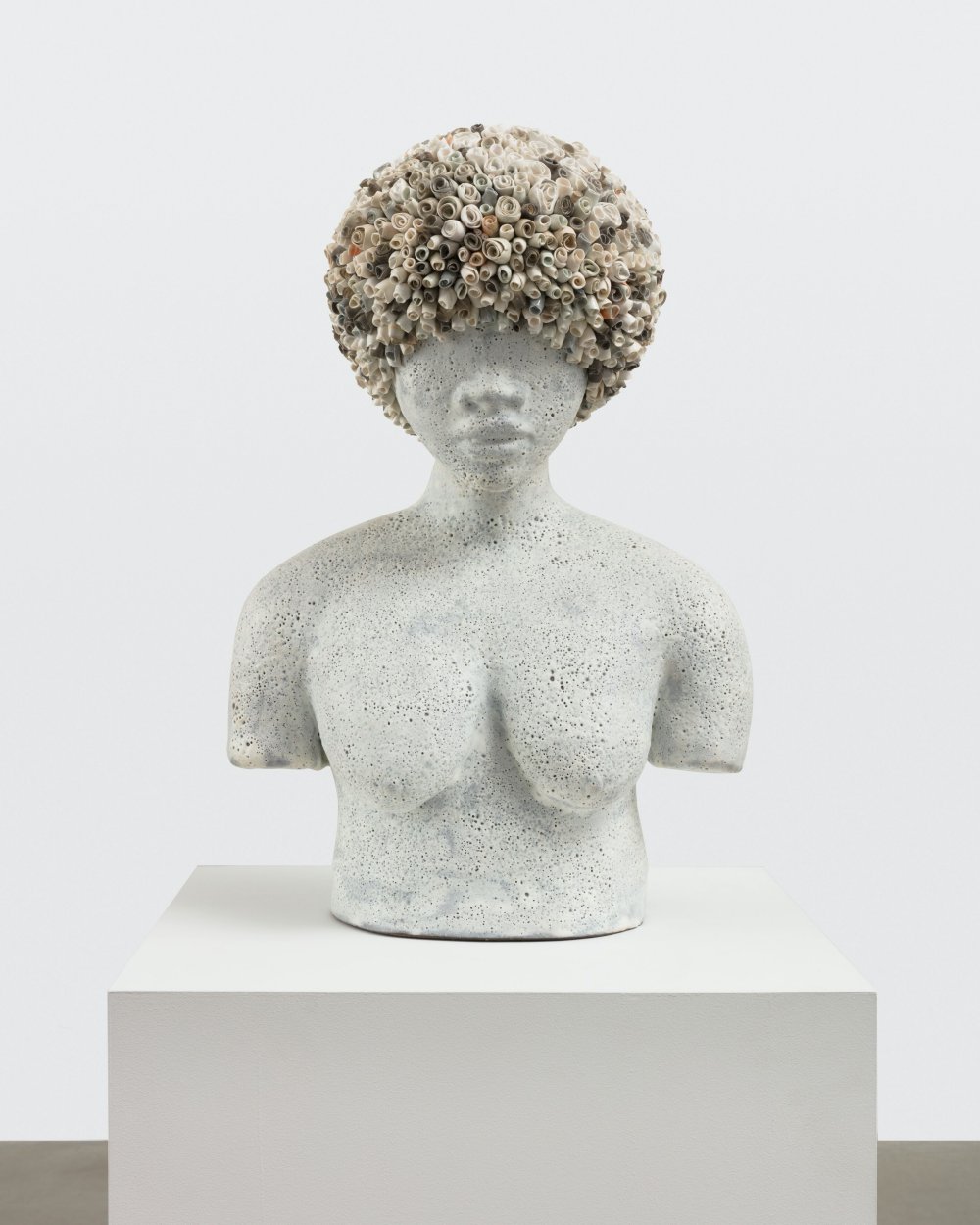 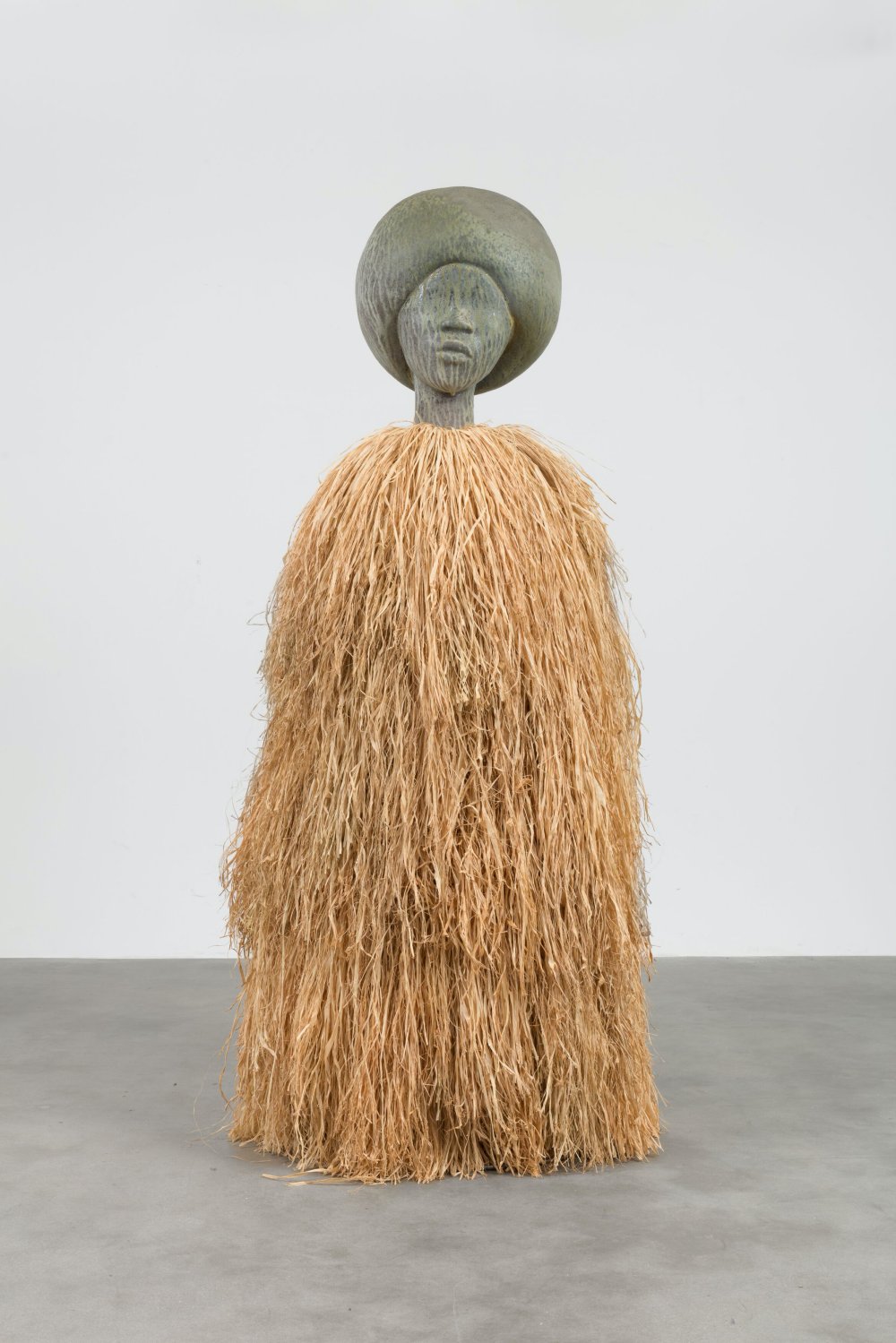 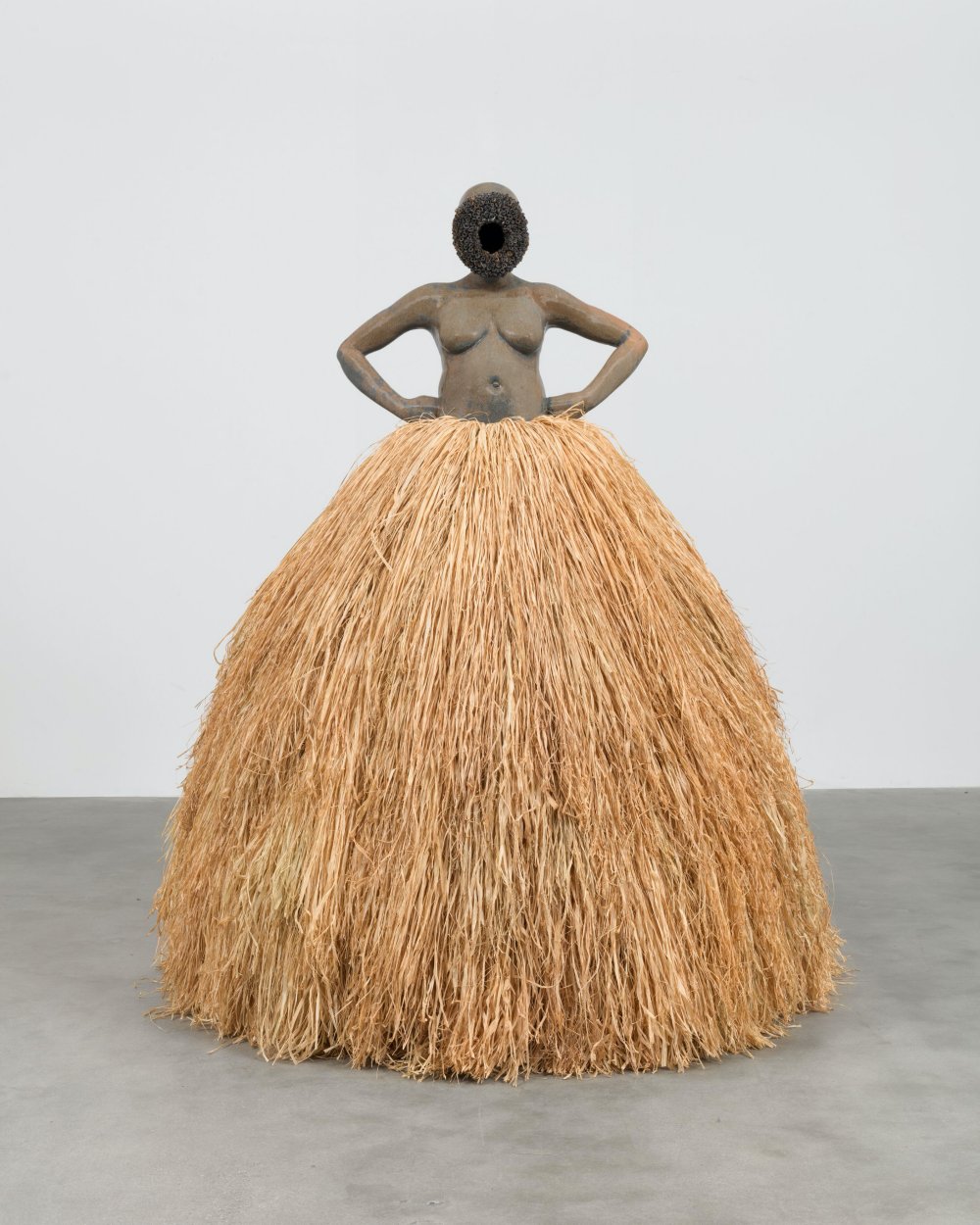 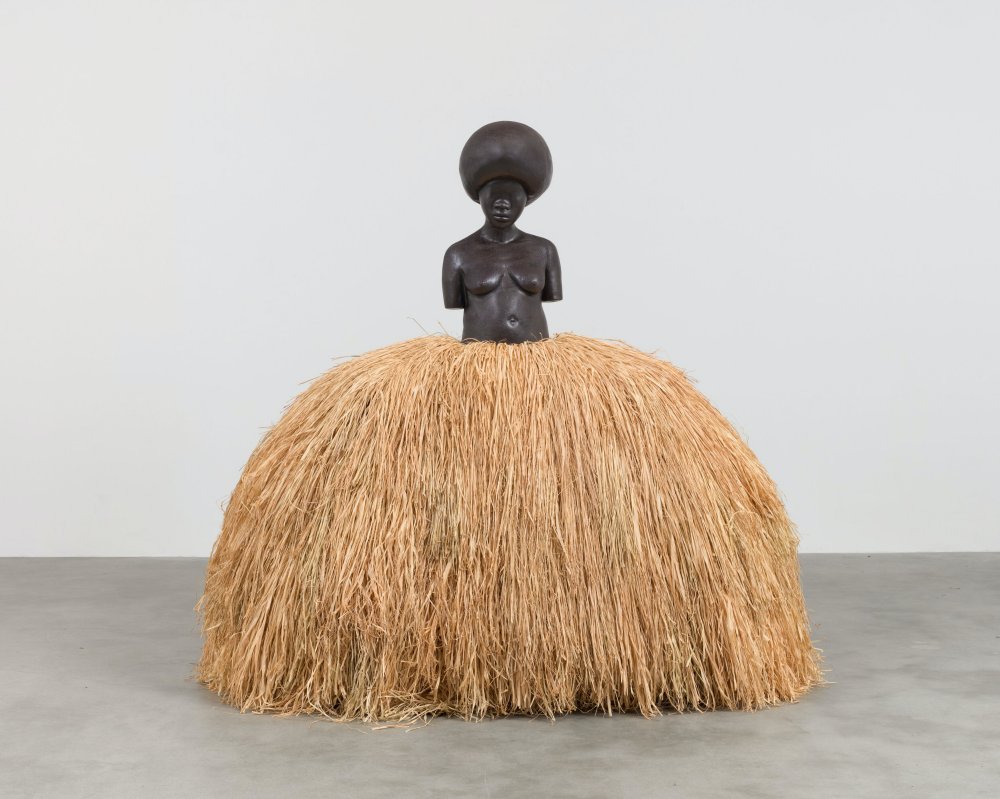 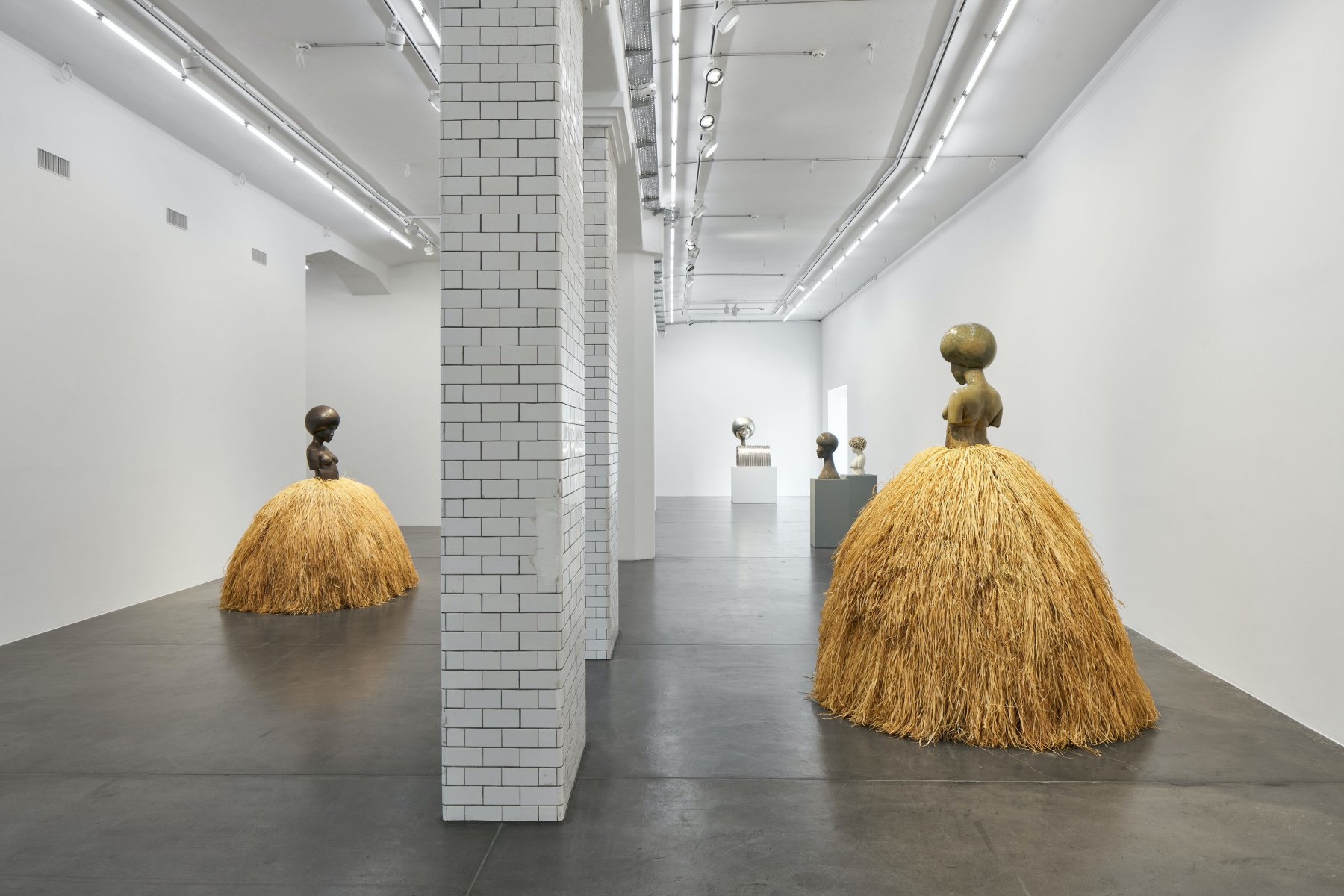 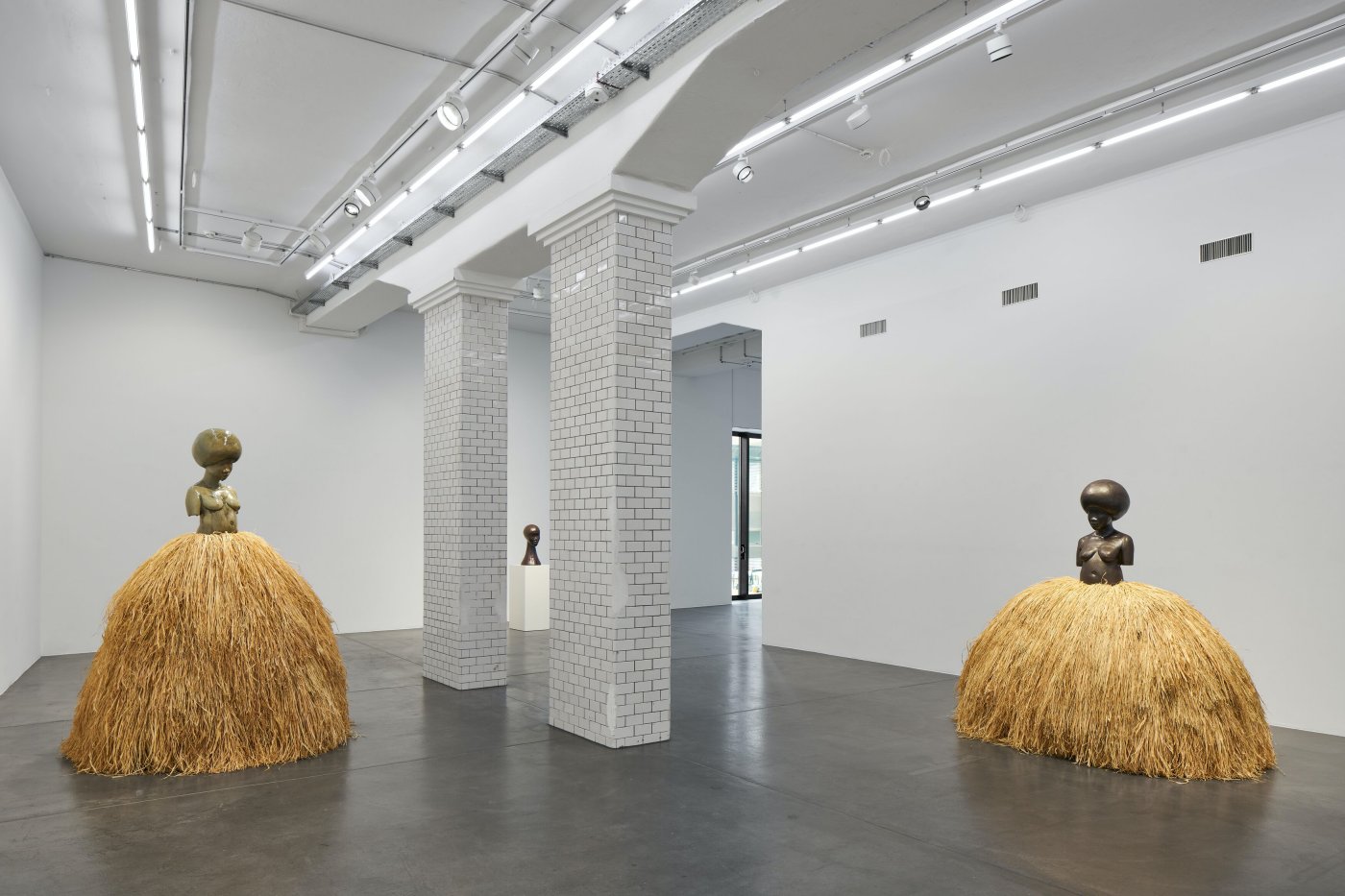 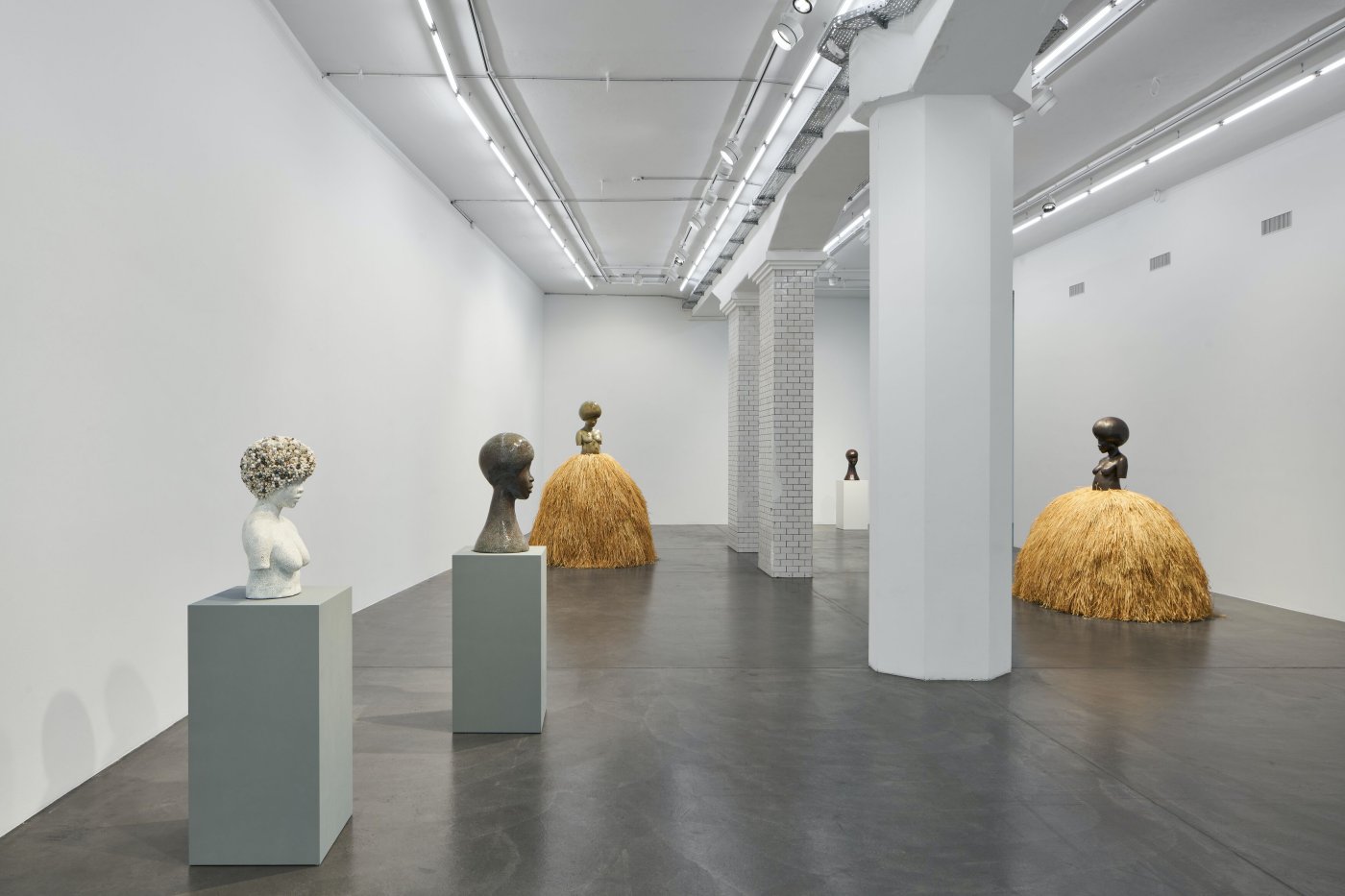 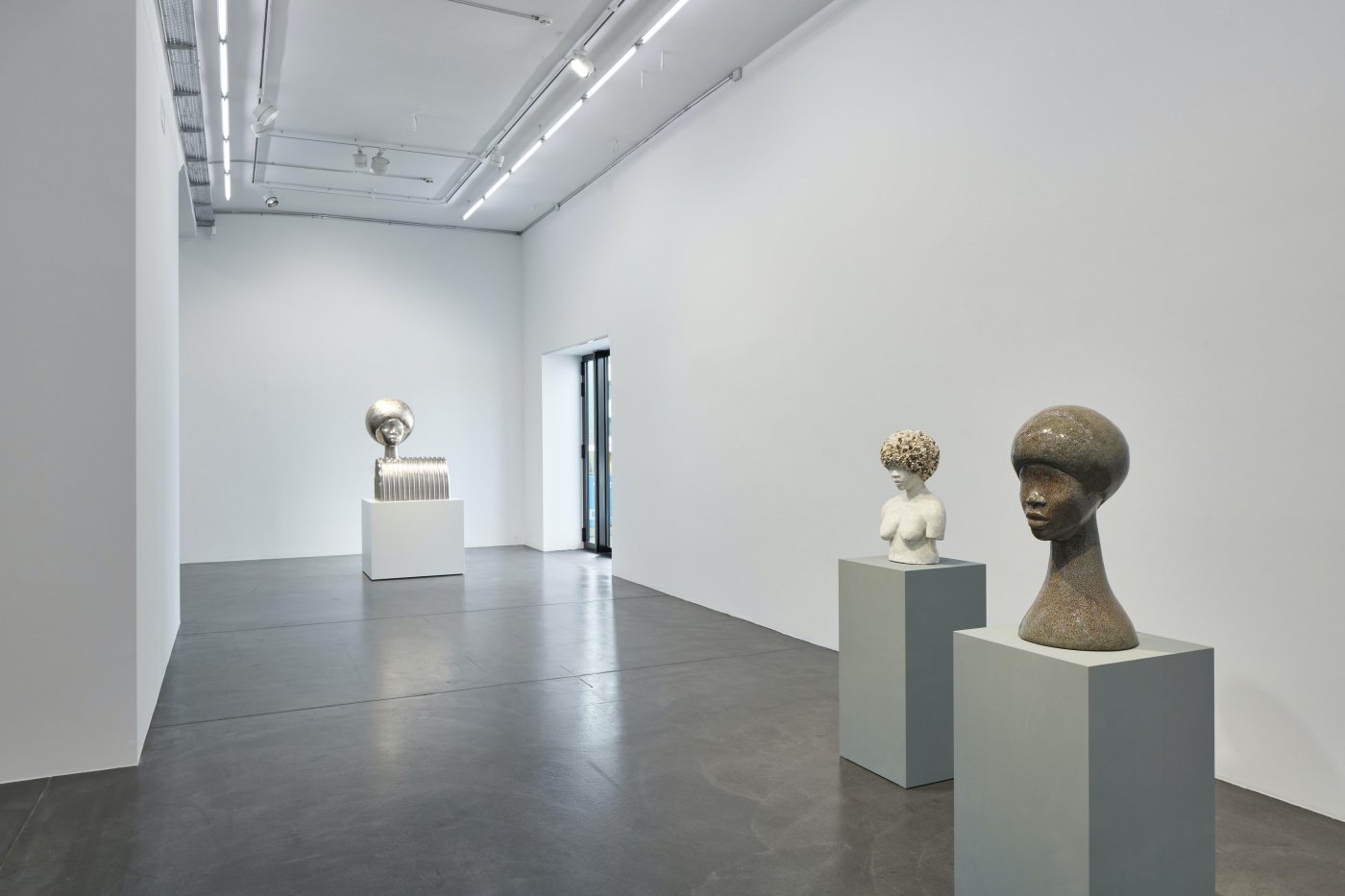 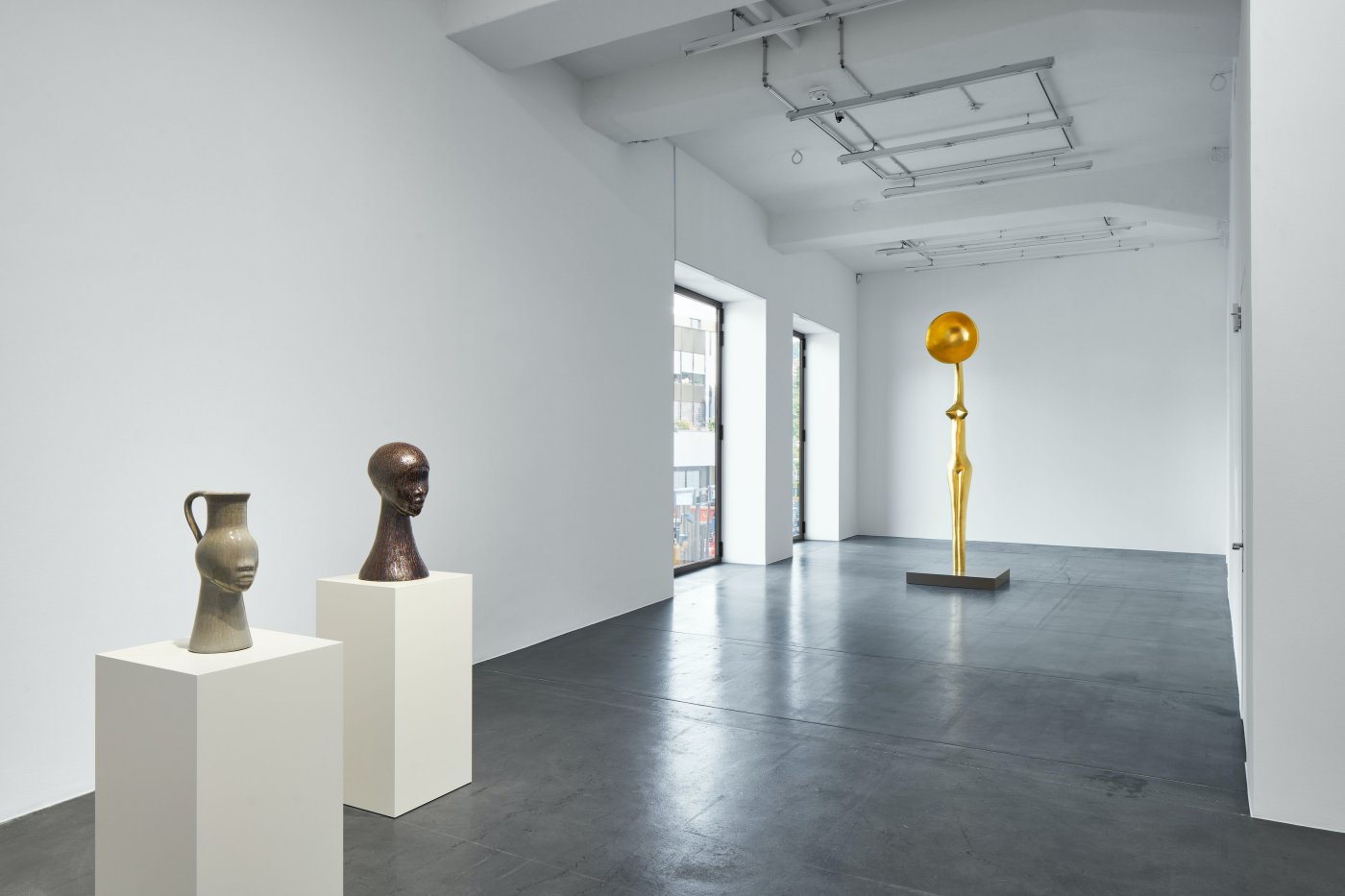 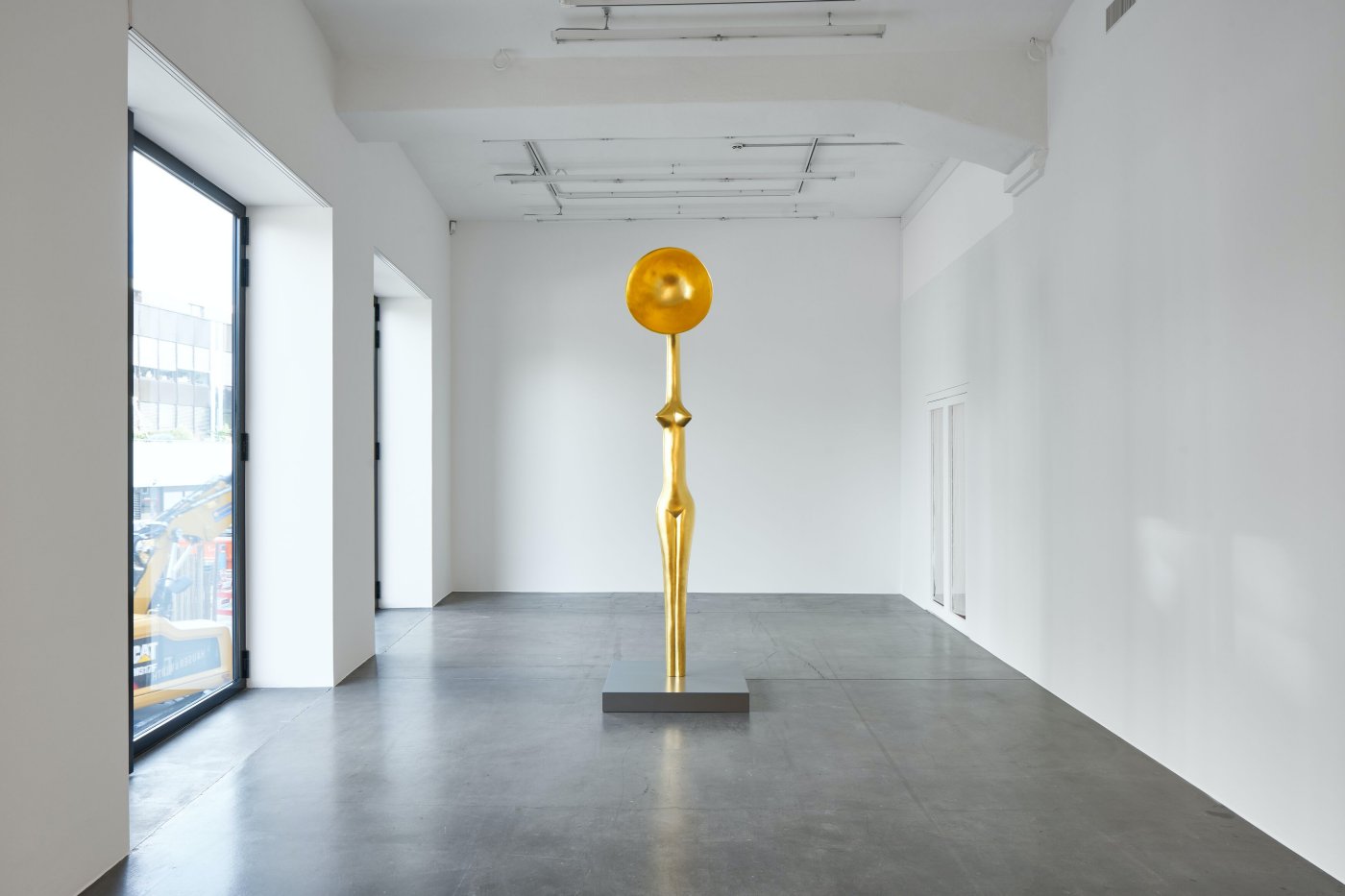 Simone Leigh works in a mode she describes as auto-ethnographic, employing materials, forms and sculptural traditions of West and South African provenance. Additionally recognisable within Leigh’s sculptural language are references to early African American forms, such as the face jugs of the American South, as well as Americana used to essentialise the black body, production of which spiked in the USA in the 1890s. These objects, such as the ‘Mammy’s cupboard’, were later popularised during the Jim Crow era, as the exaggerated creolisation of facial features in urns, jars, and bowls came to signify the representation of Blackness in America.

For this exhibition, the artist’s first major show in Switzerland, Leigh will present the monumental bronze sculpture ‘Sentinel (Gold)’ (2021), a material the artist began using in 2018. Standing at 10 feet (3 metres) tall and encased in gold leaf, this large-scale sculpture continues the artist’s ongoing exploration of the social reality that arises from the use, consumption, and creation of objects, and the communities that they serve. Atop an abstract but recognisably female body sits the face of a spoon in place of the figure’s head. The work takes inspiration from an object used in fertility rituals and a category described in West African Art as a power object, something that acts either through formal significance or ritual use. The elongated form inverts the idea that Black women are innately strong and invulnerable and, by rendering the work at an architectural scale, Leigh elevates the object’s traditional functionality. Moreover, by encasing the object in gold leaf, Leigh evokes the history and politics of goldmining on the African continent. She comments, ‘As an artist, African art and vernacular objects are a means of exploring a multitude of themes, particularly the notion of women’s work, authorship, anonymity, and other ways in which we perceive culture and value.’

A key part of the exhibition will be several new raffia skirted figures with ceramic torsos. Referencing dwellings and cultures across continents, these new works speak to ideas of habitat, architecture, and material culture. Leigh says: ‘Since my early 20s I have been interested in architecture as the ultimate material culture. Speaking to form, history, use and labour – carrying information from one generation to the next.’ The artist’s use of architectural structures and materials found in African cultures including raffia and ceramic, a natural yet challenging material to work with, continues her exploration into production and in particular the dichotomy of women’s labour. Looking to artists such as Beverly Buchanan and Noah Purefoy who reference the dwellings of the Global South in their practice, Leigh is currently developing her use of raffia as an exploration of marronage, a term which refers to a strategy of resistance by those who removed themselves from the plantations and created hidden, independent settlements and communities in swamps of the Southern states. For Leigh, the concept of hiding in plain sight could be considered a state of being that has subsequently informed African American artists and the diaspora.

Leigh’s investigation of make-shift dwellings is continued in a new Sphinx work, made from bronze and platinum. The form imitates the structure of a quonset, a basic corrugated building mass produced during World War II for the war effort in Europe and the South Pacific. As with her raffia skirted figures, the artist combines this architectural structure with the abstracted female form, exploring the relationship between the Black female body and the historical and social contexts that it appears in. However, the work does not prioritize the physical form as its subject matter – the facial features are simplified and rendered anonymous. Rather than seeking to represent a singular person or figure, Leigh depicts many things simultaneously: a state of mind, an interior or external experience, an invisible history.