Spirits in the Material World

Spirits in the Material World 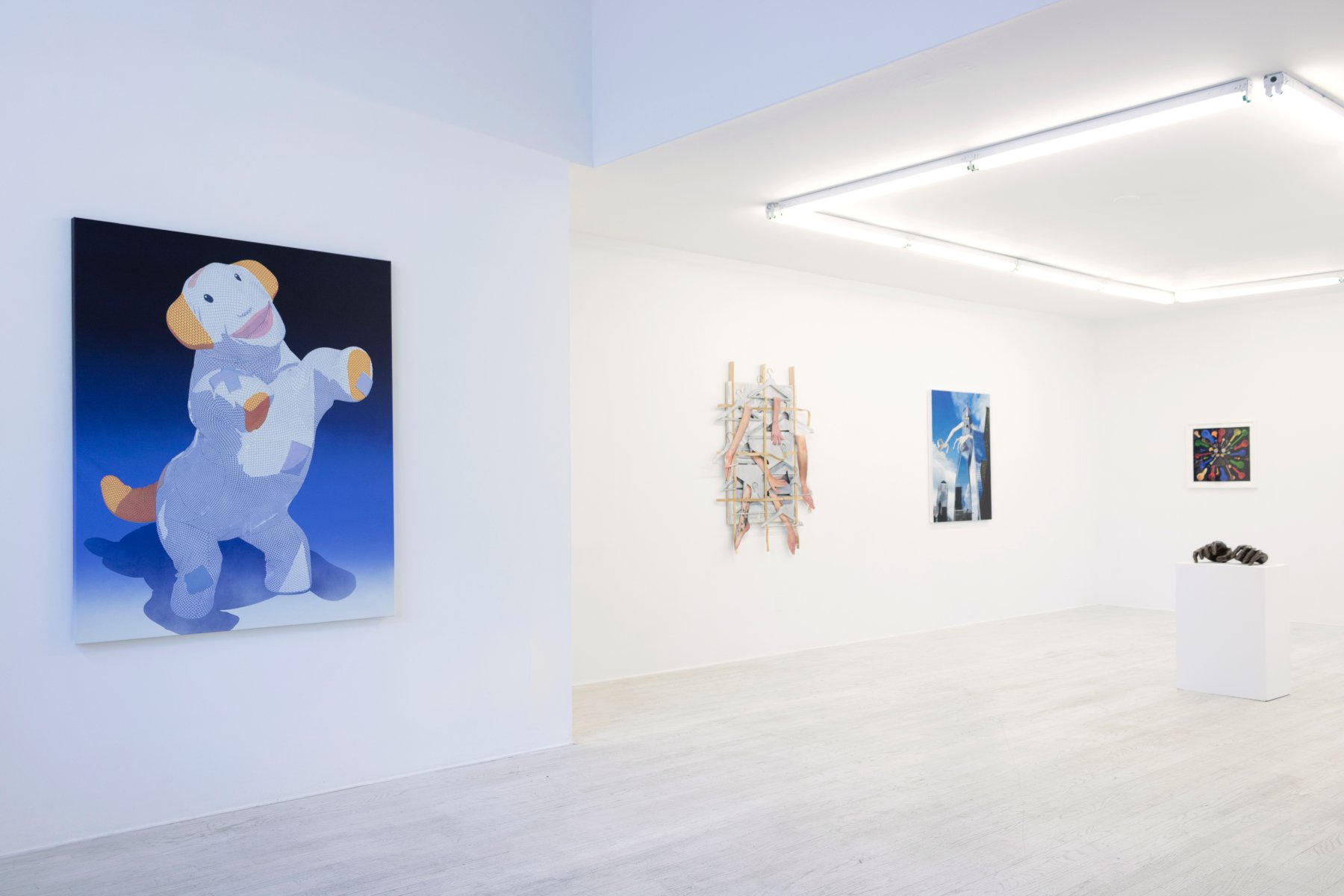 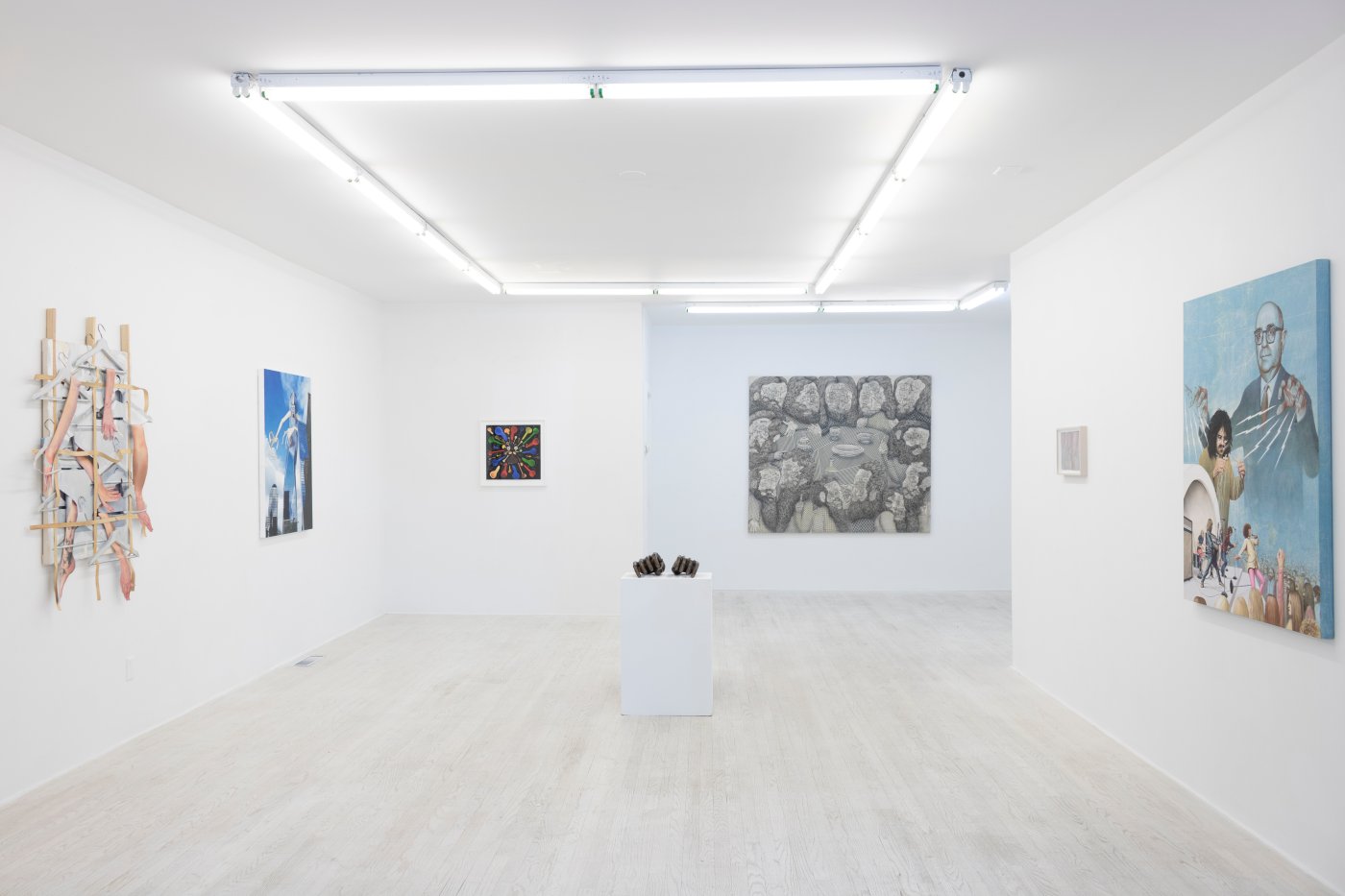 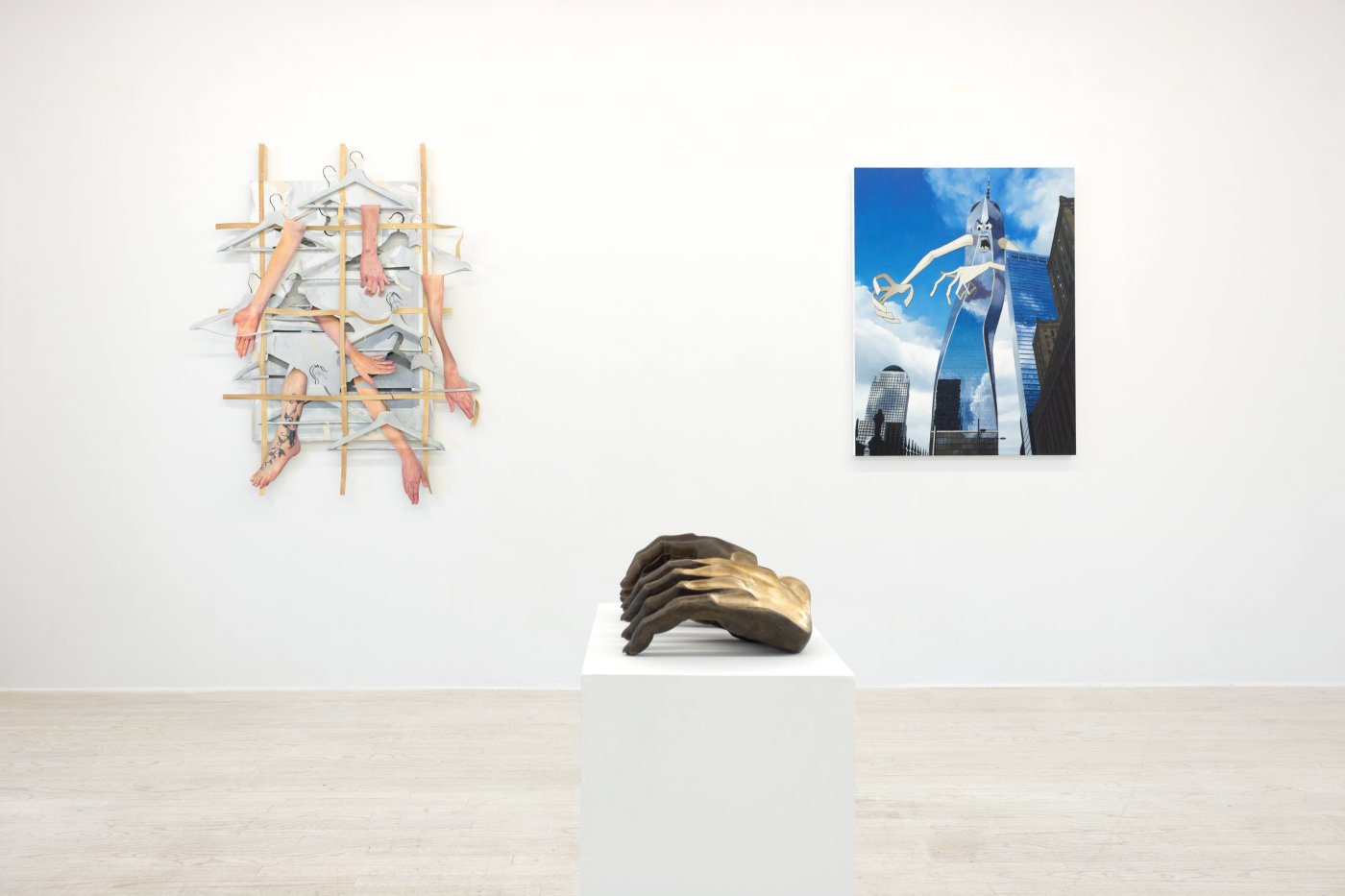 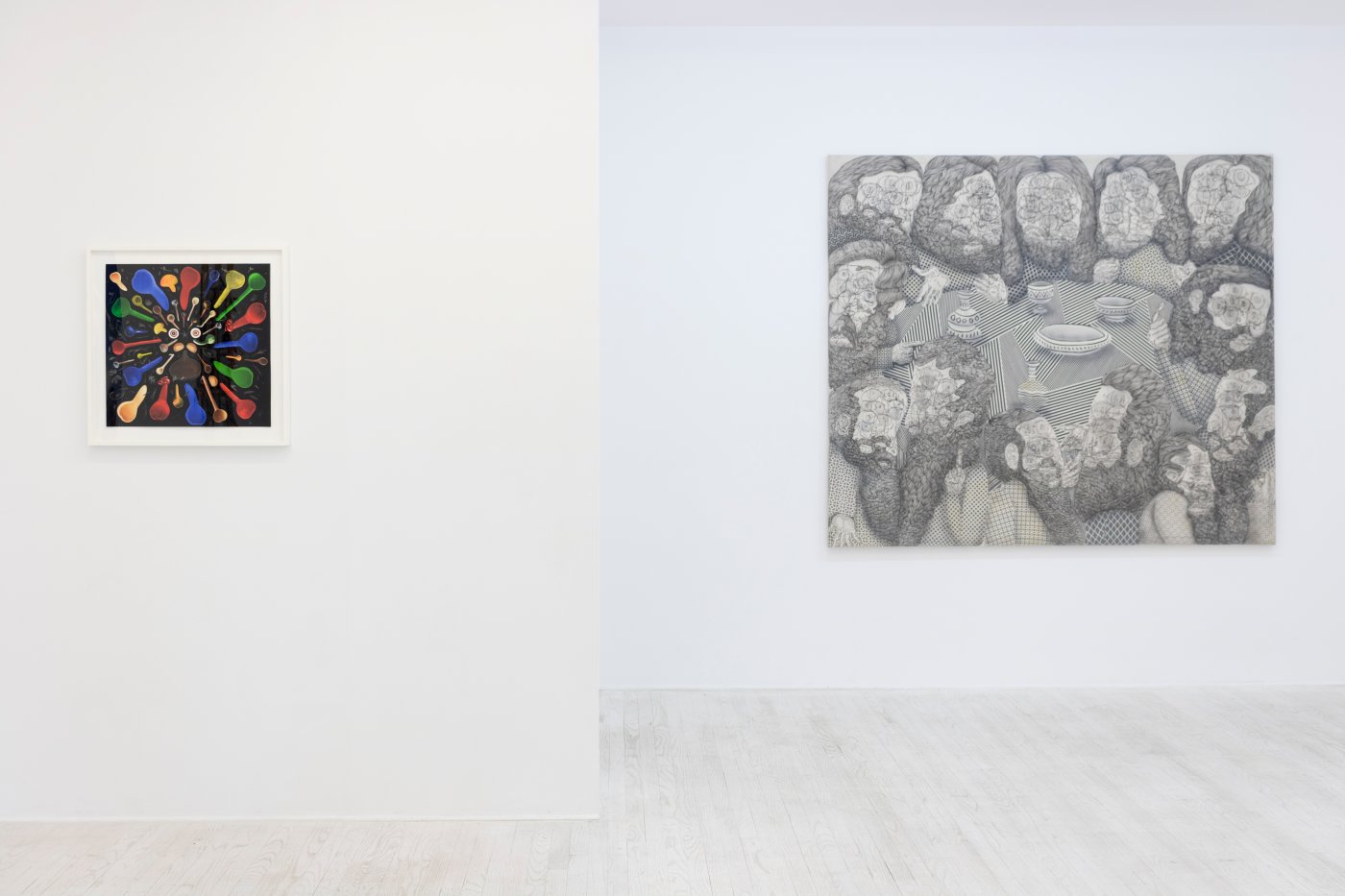 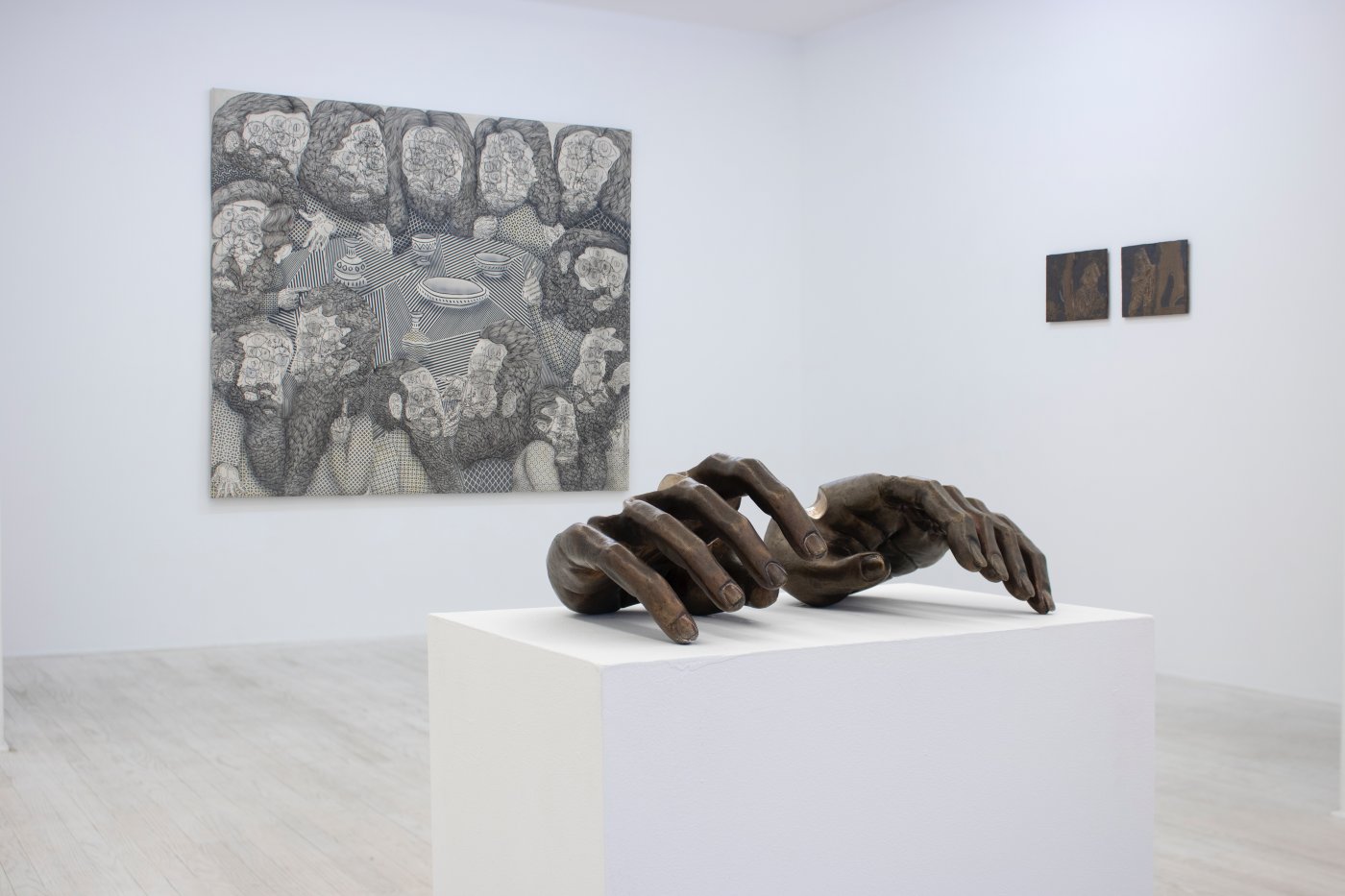 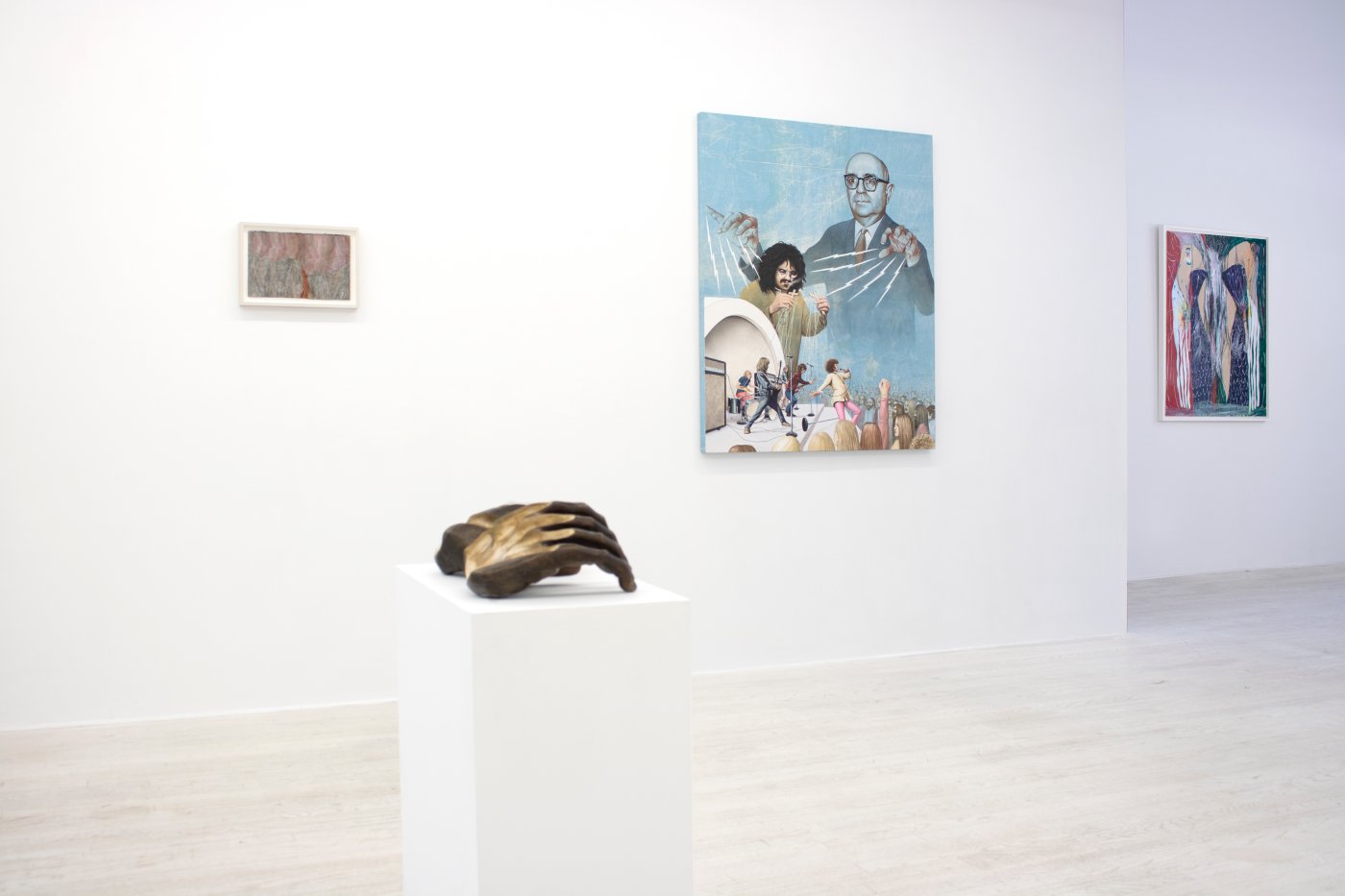 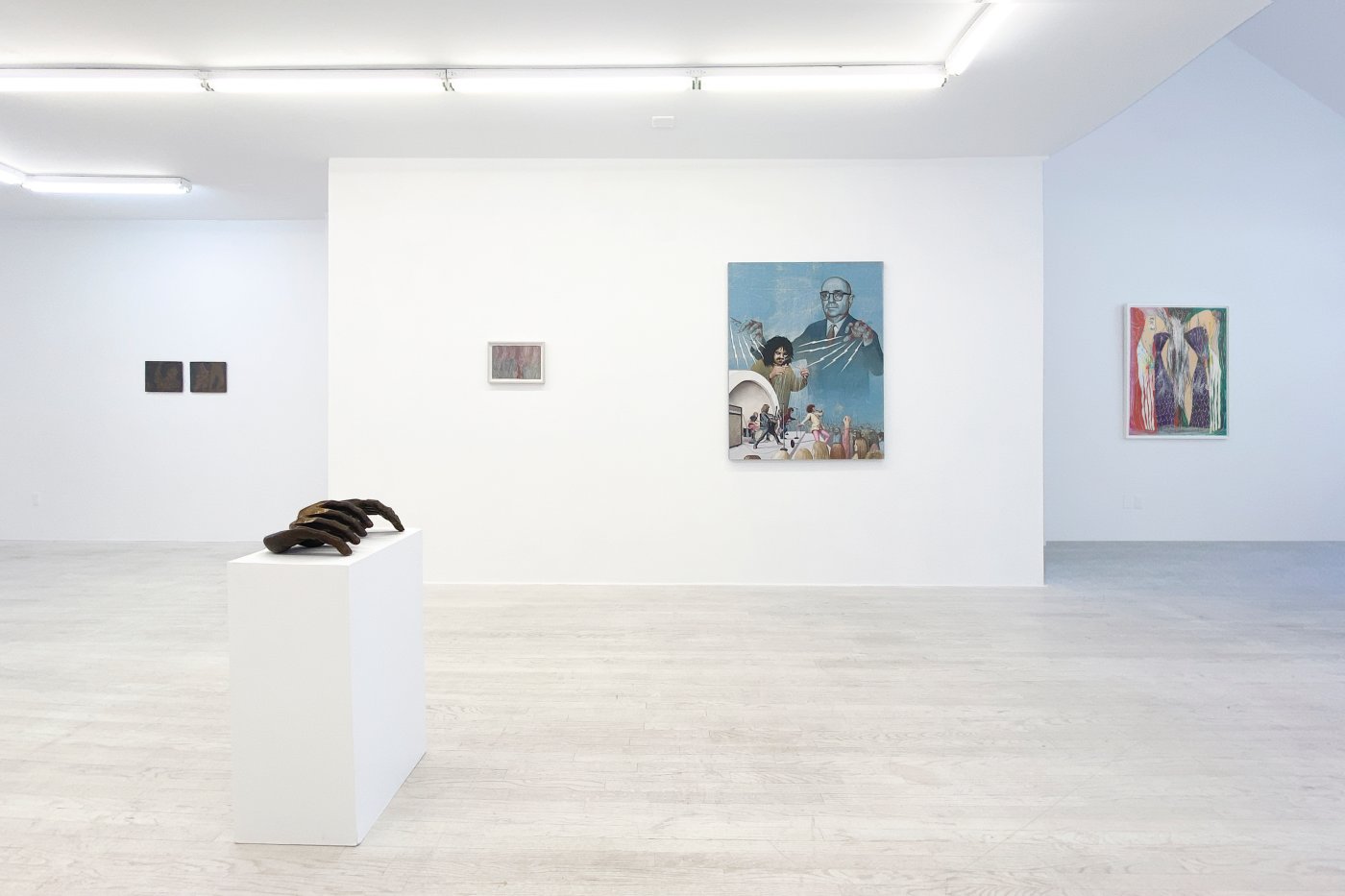 While the lyrical choices of the song and record hint at poltergeists, the supernatural and magic, an undercurrent of psychological and political unrest is the real driving theme. The same can be said of the works in the show with references that slyly needle classicism, history, social media, imperialism and consumerism. The gallery is filled with images and objects that could be interpreted as literal possessions, each crafted with a possessed attention to detail. In paintings, collages, drawings and sculptures, inanimate objects take human form or are overcome by outside forces. Figures emerge in part from the atmosphere or stone, float suspended in ether, or manifest from digital space. They’re here…..

In David Kennedy Cutler’s work the most basic inevitabilities of existence—dressing, eating, touching, sharing, working, growing, deteriorating—are turned into artifice. In a culture saturated in images, in a climate where we are expected to proliferate our physical selves endlessly, our consciousness experiences a scattering, or stuttering. By projecting the self in perpetuity, we become dissociated from ourselves. Made using inkjet transfer on canvas, plaster, and Aqua-resin, his compositions are reconfigured until they feel as if they had accumulated into being without coercion. They exist in a material reality that is unburdened by truth, and yet their motifs are derived from the most basic and immediately tactile space.

Alex Dodge’s paintings consistently explore the promise of technology as it interacts with and redefines the human body. His painted images are generated using a range of virtual systems and traditional tools, but ultimately rendered in thick layers of oil paint using laser-cut stencils. Working across mediums and often with imagery laden with textile patterns, his work implies that technology transcends cultural contexts.
Corey Escoto’s practice is born from an almost Structuralist engagement with analog photography, as the artist delves into the decay of analog film and the rise of digital imagery. In his technically rigorous photo process, Escoto maintains an indexical relationship to the natural world, despite having no optical resemblance to it. His multi exposure polaroid photographs act as the structural blueprint for sculptural forms rich in tactile surfaces and material. This reversal of hierarchy in the traditional relationship between image and subject expands his engagement with form and image.

Naotaka Hiro’s daily drawing practice has formed the basis from which his exploration of the body has generated an expansive set of ideas and images. His signature visual lexicon of contorted, self-examining forms and distended body parts, rib cages, hair, legs, genitals, are viscerally rendered at a scale approximately one half of the artist’s body. Within this methodology, Hiro’s reconstruction of his own form and image becomes defined by the limitations of his sight and reach wherein his body’s position and movements within, around and upon materials drives his mark making. The results are recognizably corporeal yet conspicuously other.
Matt Kenny’s varied practice spans photo-realist landscape, indexical mono-printing, quasi-abstract shaped panels, Google Earth manipulations, fakes, Venn diagram drawing and poetry. Through renderings of One World Trade Center, in the style of sidewalk artist caricature, Kenny anthropomorphizes the building into a menacing creature looming over downtown Manhattan. Kenny uses the monster’s appearance in various emotional states, vantage points, times of day, and seasons to reflect the urban psyche, particularly that the greater New York area.

José Lerma collapses the historical with the autobiographical, making works that are part art history and part personal mythology. Several of Lerma’s recurring themes deal with the tension between the heroic and the pathetic, as well as the rise and fall of great figures. His research examines the vast network of sociological, political, and economic forces that have shaped, and continue to shape, contemporary culture. Lerma portrays his subjects in ways that elevate the mundane and trivialize the grand. He connects influential figures from history through trivial absurdities, crafting a visual world that is both celebratory and absurd. Simultaneously rooted in classical European painting and lowbrow pop art, his works express the tragic comedy of global colonial and post-colonial cultural relations in eye-popping and instantly relatable ways.

Sarah Peters works show the psychic geography of people, through playfully narrative critiques of cultural authority, identity, and gendered power dynamics. There is an element of irony in her dismembered sculptures that is transgressive, transforming a variety of social, historical, and cultural symbols into an open-ended game. This visual language of play allows a freedom of expression that can exist in two states at once: figurative but abstracted, familiar though strange, contemporary yet historical. Peters’ process becomes not unlike an anthropological dig, you may not know what mysterious object you’ll find underneath the many layers, and yet, once found and recognized, the objects are material evidence of the most ordinary human activity: the expression of power through objects.

Jim Shaw’s work draws from an expansive breadth of references and idiosyncratic associations to present a surrealistic take on American consumer culture. The pastiche of vintage film, advertising, and television imagery that Shaw poignantly combines in these works engenders them with a pervasive sense of nostalgia and critique for a mythologized, bygone era of American history.

Materializing from William Villalongo’s black velvet cut-outs, Black and Brown skin, eyes, and appendages intermittently appear, swirling alongside turbulent incisions and collaged elements to form the disembodied figure. The texture of the artist’s characteristic velvet reinforces the experience and sensation of spirits rising from extreme darkness, confronting conditions of their visibility. The resulting scene interrogates the tentative space held by the Black body in contemporary society and throughout history and art, balancing loss and agency over the Black self-image. Keenly aware of the limitations of skin color as a progenitor of meaning around the Black subject, the artist engages with strategic use of imagery and activity to create a context for seeing and understanding. Combining these dynamic components—both corporeal and from another world—Villalongo powerfully conveys the experience of the Black diaspora in the past and present while celebrating Black identity.