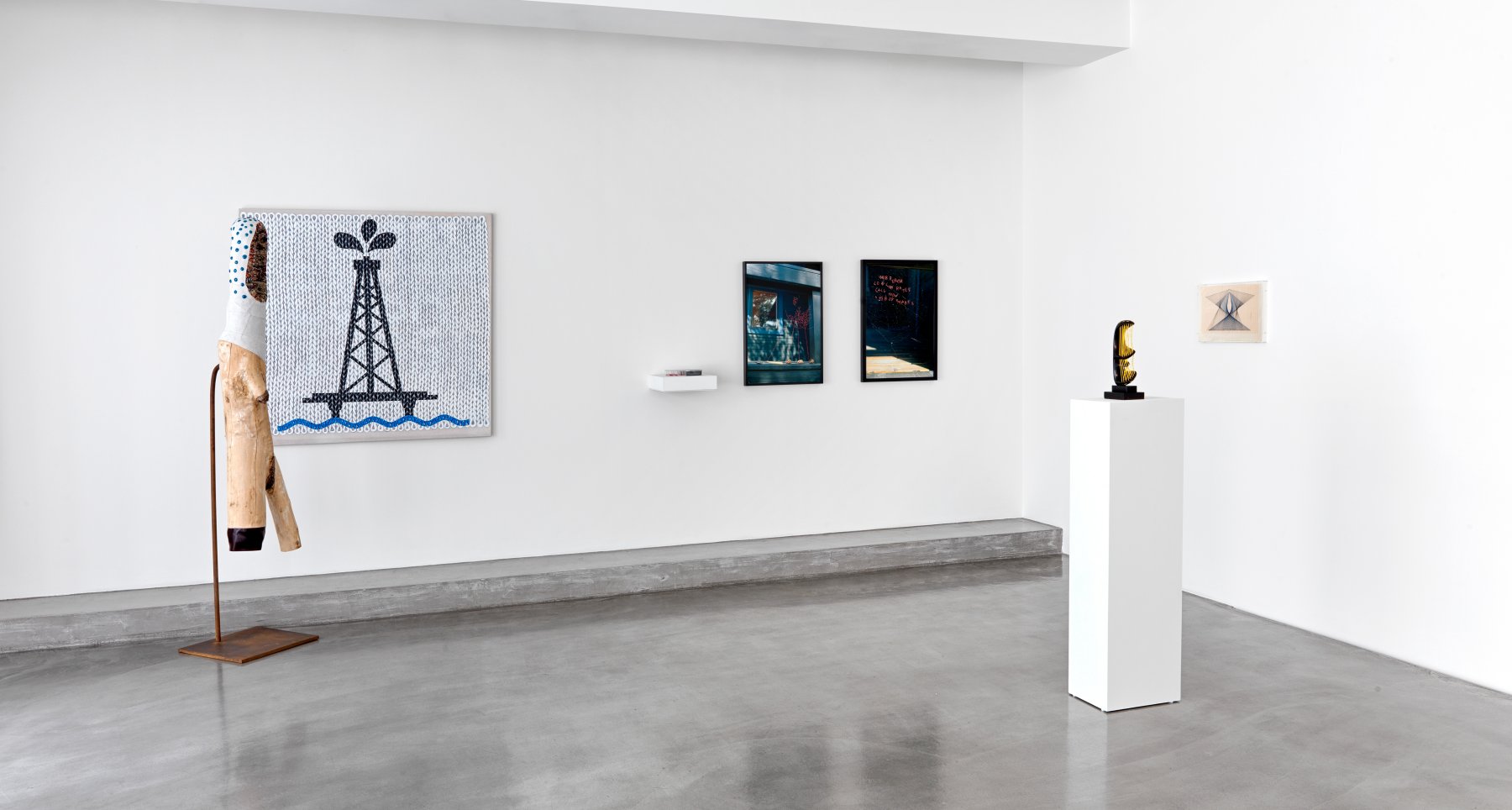 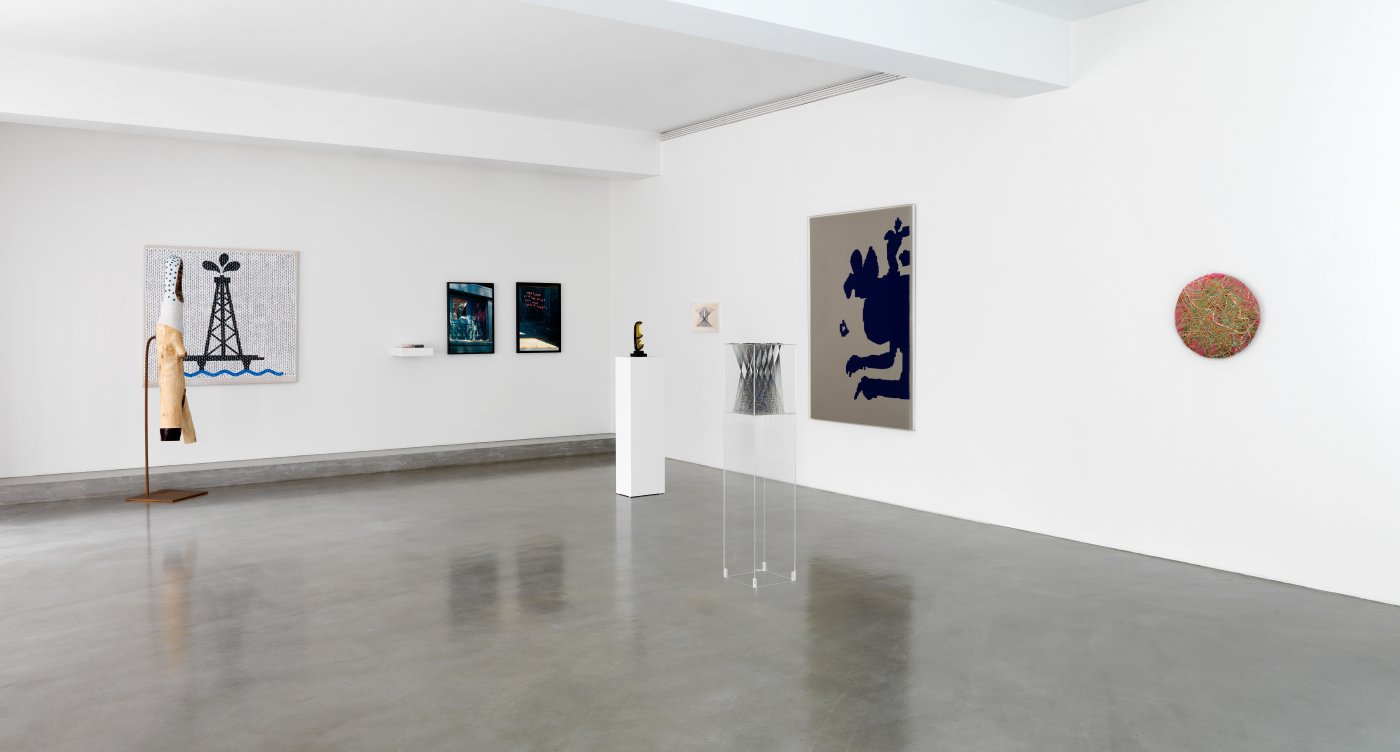 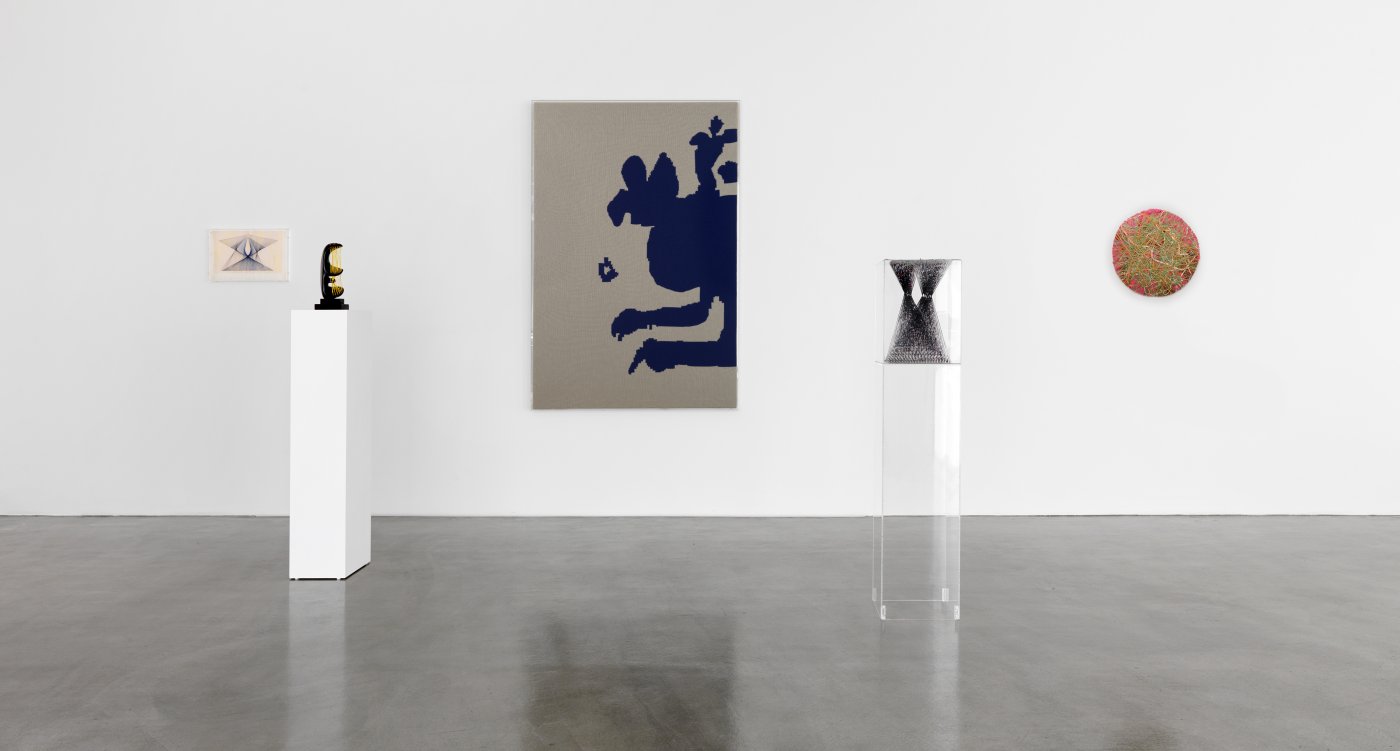 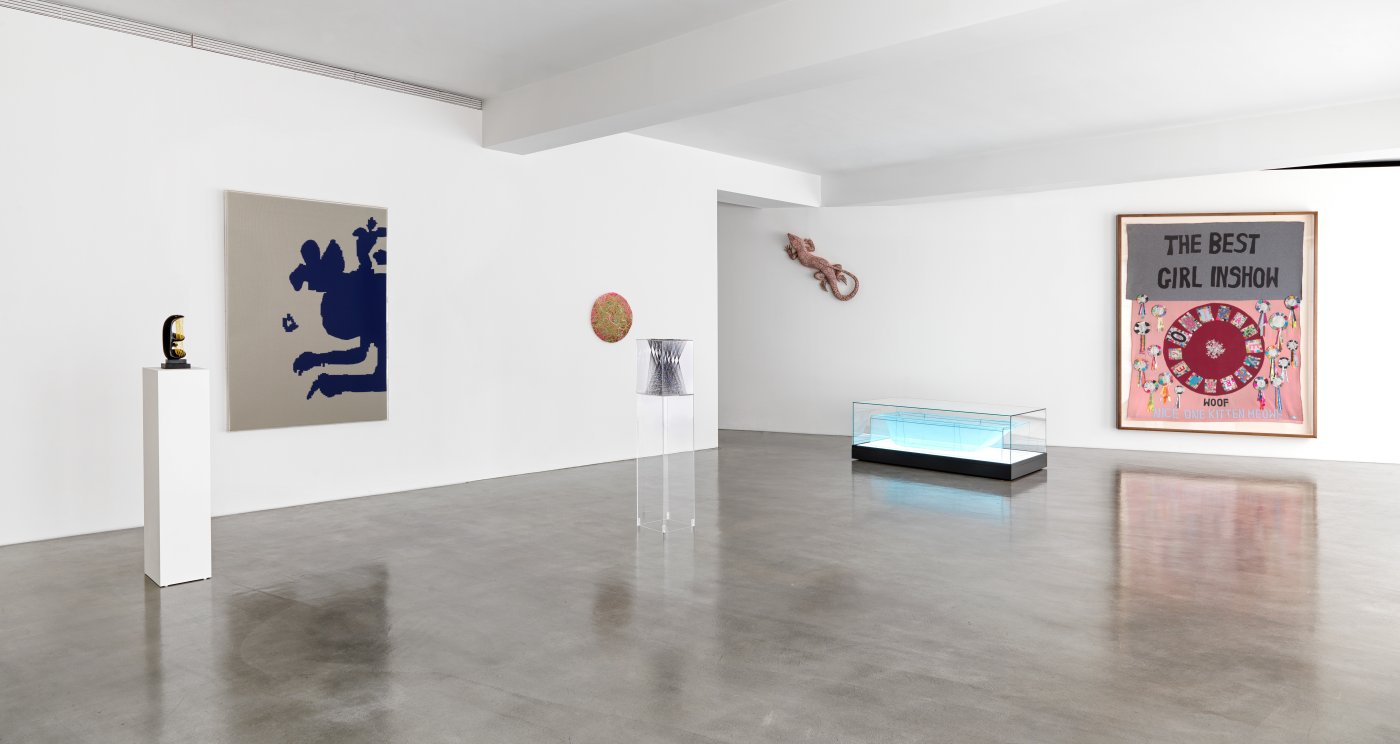 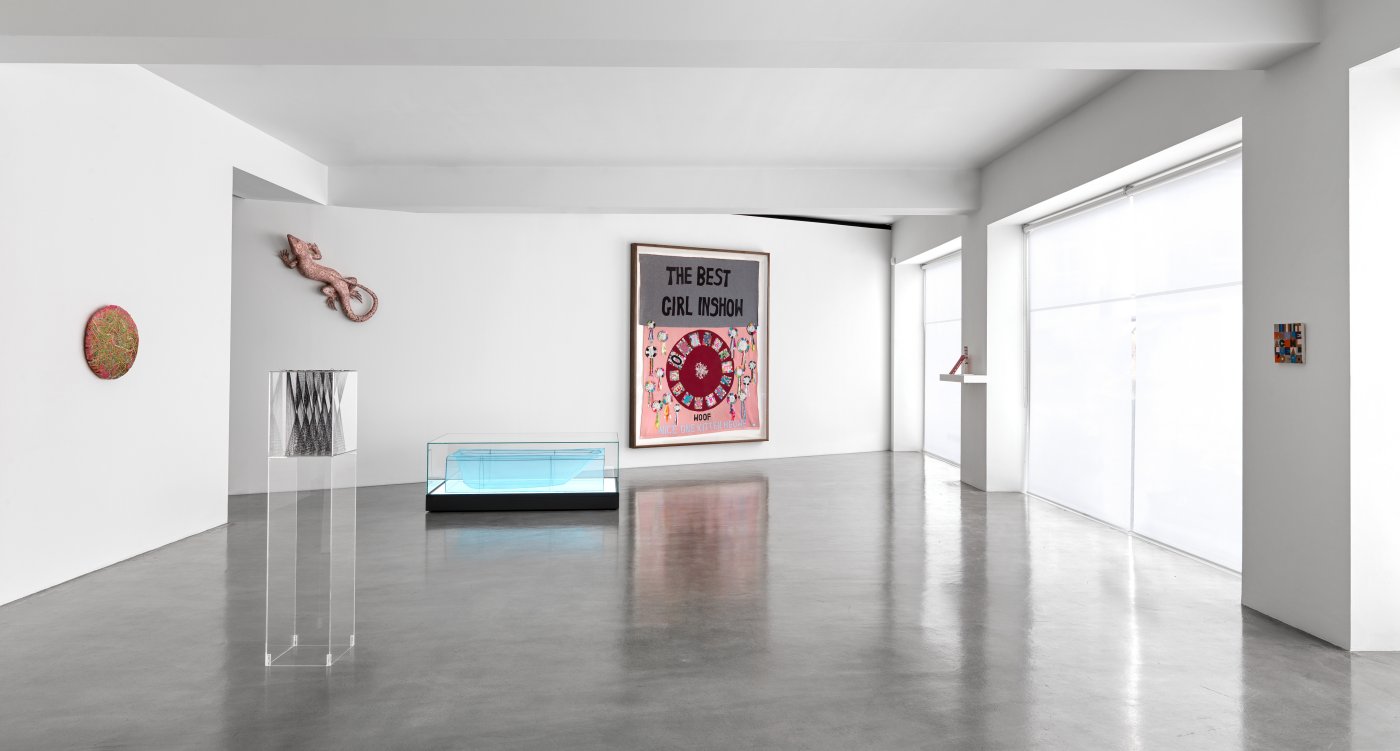 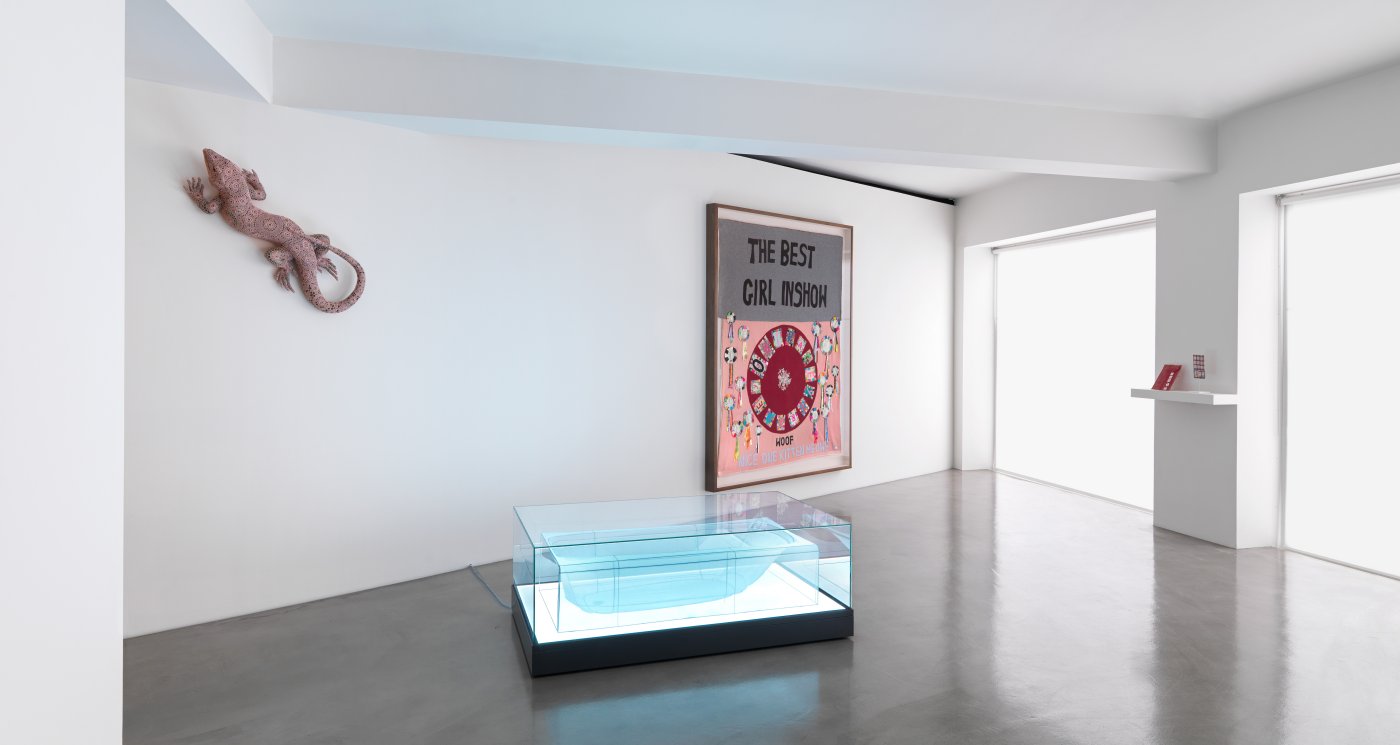 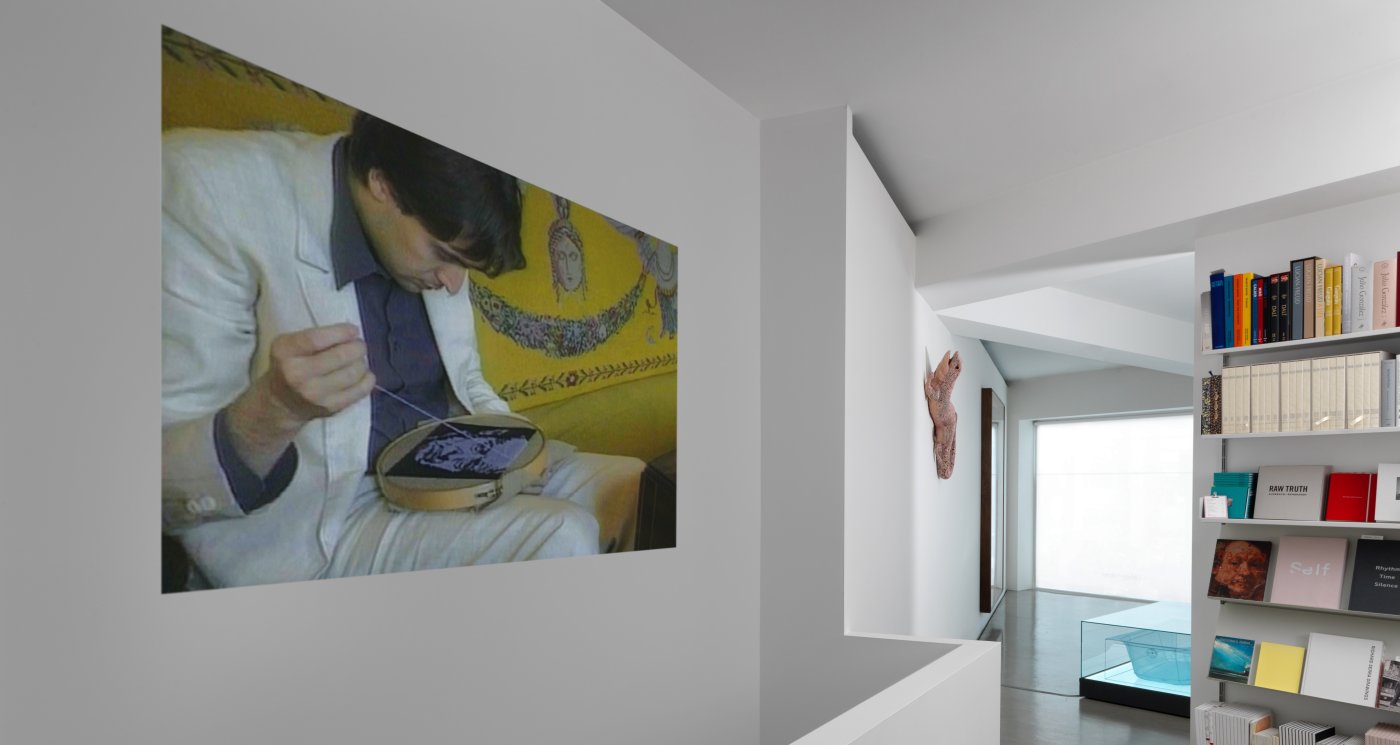 The exhibition presents sixteen artworks executed in a range of mediums and with a variety of
techniques, from modernist practices that challenge hierarchies of high and low, to fibre art that
transforms weaving into a sculptural endeavour, to feminist works that challenge stereotypes around craft and domesticity.

The exhibition is accompanied by a fully illustrated catalogue with an essay by art historian Maddy
Henkin. Stitched is the first in a series of exhibitions to be held at Ordovas that explores different techniques in twentieth-century and contemporary art, often used in unexpected ways.

The two earliest works in the show were both inspired by applications of thread to new technologies. In Henry Moore’s Stringed Figure, conceived in 1939, yellow threads weave through a biomorphic object creating complex shapes that twist and bend. The artist began creating stringed sculptures in 1937 after seeing mathematical models at the Science Museum in London. These provided a new way of seeing for Moore, who had long been exploring abstract forms with careful manipulation of intersections, abutments, and negative spaces between figures. In the 1960s, Moore recalled ‘[…] it wasn’t the scientific study of these models but the ability to look through the strings as with a bird cage and see one form within the other which excited me.’

Lenore Tawney’s Untitled, 1965, focuses specifically on textile technology while also exploring the connection between weaving and computers. In 1964, Tawney visited a textile factory where she first encountered and was enchanted by a Jacquard loom, a nineteenth-century invention which used punch cards to mechanise the weaving process, and which was critical in the development of computer programming. Her meticulous ink drawings capture the exploded three-dimensional threads of the industrial loom. Tawney translated these drawings into threaded sculptural works some forty years later with the ‘Drawings in Air’ series, including Drawing in Air VIII, which is featured in the exhibition.

Tracey Emin knowingly embraces the personal, domestic, and feminine hobbyist practices of needlepoint and appliqué in the creation of her textile works. Sewing and quilt-making have been integral to the artist’s practice since her first solo show at White Cube in 1993.

This exhibition includes Woof, the Best Girl Inshow, executed in 2005, which is a striking example of these deeply personal creations. As the artist said in an interview with Charlotte Cripps of The Independent in 2010: ‘I have always treated my blanket-making more like a painting in terms of building up layers and textures. Quilt-making involves a lot of thought and love. Just the time involved in the process means many things are discussed and considered concerning life.’

Sheila Hicks is one of the most innovative and accomplished artists in the medium; her first major
UK retrospective is currently on view at the Hepworth Wakefield (until 25 September 2022). Having
originally begun her career as a painter, she started to explore textiles in the 1950s and has since become renowned for her sculptural works which display her fascination with colour, form and texture. The exhibition includes Treasured Moments which was executed in linen, cotton and synthetic fibres in 2021.

The exhibition includes works by Alighiero Boetti and Joana Vasconcelos, both of which display
meticulous needlework and refined craftsmanship that has been outsourced to skilled artisans. Boetti employed Afghan embroiderers to produce works such as Tra l’Incudine e il Martello, developing the concept of a work and entrusting its execution to others, continuing the legacy of 1960s conceptualism that is the foundation of his career. In Haendel, Vasconcelos used famed crochet rosettes made by Azores lacemakers to cover a ceramic lizard by Rafael Bordallo Pinheiro. Each represents a high point of national artistic pride, and together they are transformed into resplendent sculpture. While both Boetti and Vasconcelos effectively celebrate the handmade, it is in the context of economic value, labour costs and internationally circulating goods that these fineries take on their full symbolic meaning beyond a celebration of the artisanal.

The American critic Arthur Danto argued that weaving is a foundational metaphor in Western philosophy dating to the classical Greek tradition. Nina Katchadourian’s ‘Mended Spiderwebs’ series echoes Ovid’s tale of Arachne, the proud mortal who challenges the goddess Athena at her own art of weaving; jealous of Arachne’s superior product, Athena transforms her into spider. In 1998, Katchadourian searched for damaged spiders’ webs in the forest around her house and repaired them with red sewing thread and glue. Within hours, the threads could be found left lying on the ground as the spiders rejected her efforts and made their own repairs. Katchadourian’s photographs document the ephemeral installations, while the exhibition also includes a Do-It-Yourself Spiderweb Repair Kit.

Francesco Vezzoli’s An Embroidered Trilogy is from a celebrated series of short films that connect the history of cinema and embroidery. Layered with in-jokes for the Hollywood-obsessed, the artist makes a cameo appearance in each video, stitching a portrait of the film’s subjects (Mario Praz, Silvana Mangano, and Douglas Sirk, respectively). Placed within his own scenes, Vezzoli undermines his authority as an auteur, becoming a hobbyist. Vezzoli developed each film around an avid embroiderer, using needlework as a structuring device.

The exhibition also includes Untitled, 1992, one of the celebrated series of knitted wool paintings by Rosemarie Trockel; Myrrha, 2022, by Koushna Navabi, the Iranian-born artist whose work includes a strong emphasis on textile, embroidery and knitting; and Untitled (red coat, construction) and Untitled (plaid pattern, construction) by James Castle, the self-taught American artist who was born deaf and used art as a key medium of expression, creating artworks from found materials.