Galerie Max Hetzler presents a double exhibition of new and recent works by Tursic & Mille, on view at two of the gallery’s locations in Berlin: Bleibtreustraße 45 and 15/16. It is the artist duo’s fourth solo exhibition with the gallery. 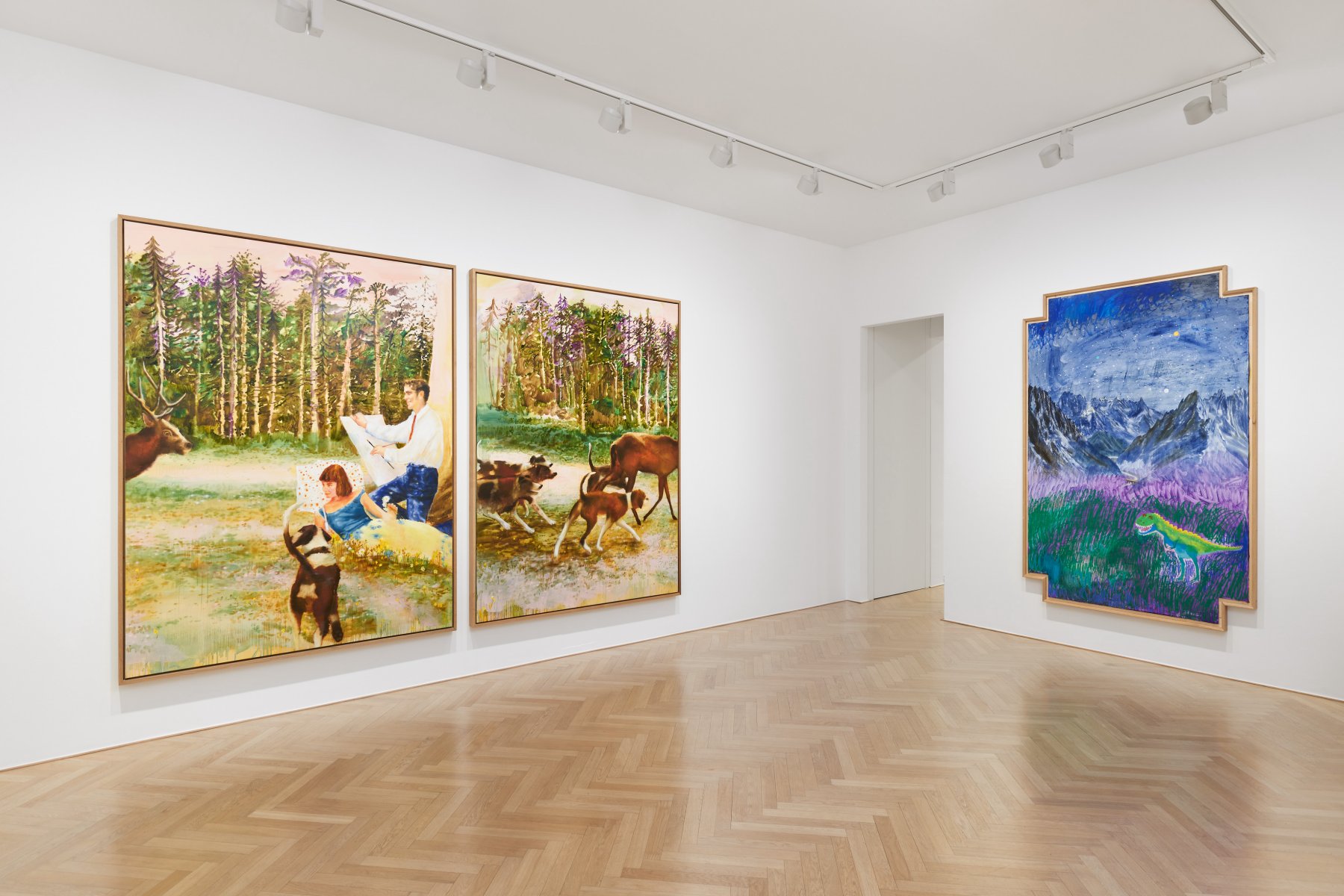 Ida Tursic and Wilfried Mille have been working together since 2000, delving into the contemporary world’s overload of images to approach the question of how to paint in the present age. Known for their joyfully eccentric paintings and sculptures which combine an awareness of art history with a wide spectrum of motifs, Tursic & Mille simultaneously act within and challenge the tradition of the medium, with a playful mixture of ‘high’ and ‘low’ references. Instinctively culled from different media, especially the Internet, the elements within their work alternate as a language in themselves, or guide the viewer through scenes, reflecting on the practice of painting.

At Bleibtreustraße 45, the artists present the latest examples from their series Peindre la peinture (Paint the paint), begun in 2021. Executed on wood, in intimate formats, the works depict genre scenes with Beckettian characters wrestling with coloured stains, subjected to strange and archaic rituals. Reflecting on the first work in the series, curator and critic Judicaël Lavrador discerns, ‘The young woman observes, half disgusted and half perplexed, the thick layer of blue paint that stains her fingers. She has dirtied them on purpose, dipping them in the thick puddle of the same colour that lies on the table in front of her. The painting could serve as a portrait of any painter at work, faced with their demon, these pigments diluted in oil, uncontrollable, sticking to their fingers, body and soul, heady and rebellious to the brushstrokes that claim to have all the power over them. And yet. The paint does what it wants: it comes out of nowhere, spoiling the image as much as it traces it’. (1)

In dialogue with this series is a large portrait of Walter Benjamin over a screen-printed frame: based on his identity card, the image has been partially abstracted with colourful daubs and strokes of paint. Also on view are a series of expressive, wooden cutouts, created using a chainsaw and painted in hues of blue, magenta, yellow and black. Abstract at first glance, they refer back to specific spots of colour on paper. Substituting the blue, red and yellow of Modernism, their colours form the basis for all image production in offset printing (CMYK), thereby evoking one of the first tools used to proliferate images, long before the Internet.

In the last room of the gallery, a painting relating to Gustave Courbet’s L’Hallali du cerf (Killing a Deer), 1866–1867, can be found. The hunters have been replaced by a painter and companion, reclining in the grass. In an iconoclastic gesture, the painting has been cut vertically in two, and the panels exchanged, disturbing the narrative imparted by the scene. The ‘story’ now unfolds in reverse: the characters look out of the field, while the pack of dogs and the deer flee to the right. Only the stag’s head remains in front of the couple, like a hunting trophy with frightened eyes. The work is surrounded by three large-scale, anachronistic landscapes, populated by dinosaurs, UFOs and comets, repurposing wooden panels which originally made up the walls of the artists’ studio. On the floor, and spreading across the other rooms, an installation comprising cigarette butts, painkillers and anti-depressants is on view, a development from the installation at their recent exhibition at the Consortium Museum in Dijon. Cast in bronze and painted, these objects are agents of relief in fraught times, which manifest the passing of time.

The space at Bleibtreustraße 15/16 is dedicated to four paintings and a floor installation of bronze and painted apples – some rotten, others crushed or chewed – all visible from the street through the large ground-level display windows. The paintings are based on Antoine Vollon’s La motte de beurre (Mound of Butter), 1875/1885, in the collection of the National Gallery of Art in Washington. For Tursic & Mille, the attraction of this work is its essentially abstract aspect and the negation of the distinction between the figurative and the abstract that it unknowingly carries. From the original, the artists have kept only the idea of a dark background and the sculptural aspect of the represented object – a coloured mass. The repetition, simplification and enlargement, combined with the use of primary colours, abstracts the image and blurs its meaning. While very present, the butter starts to speak of something other than itself; at first familiar and reassuring, it becomes almost disturbing by its excessive size and instability. What is presented here refers to an object in the process of being made (or unmade), referring in turn, to the painting itself.