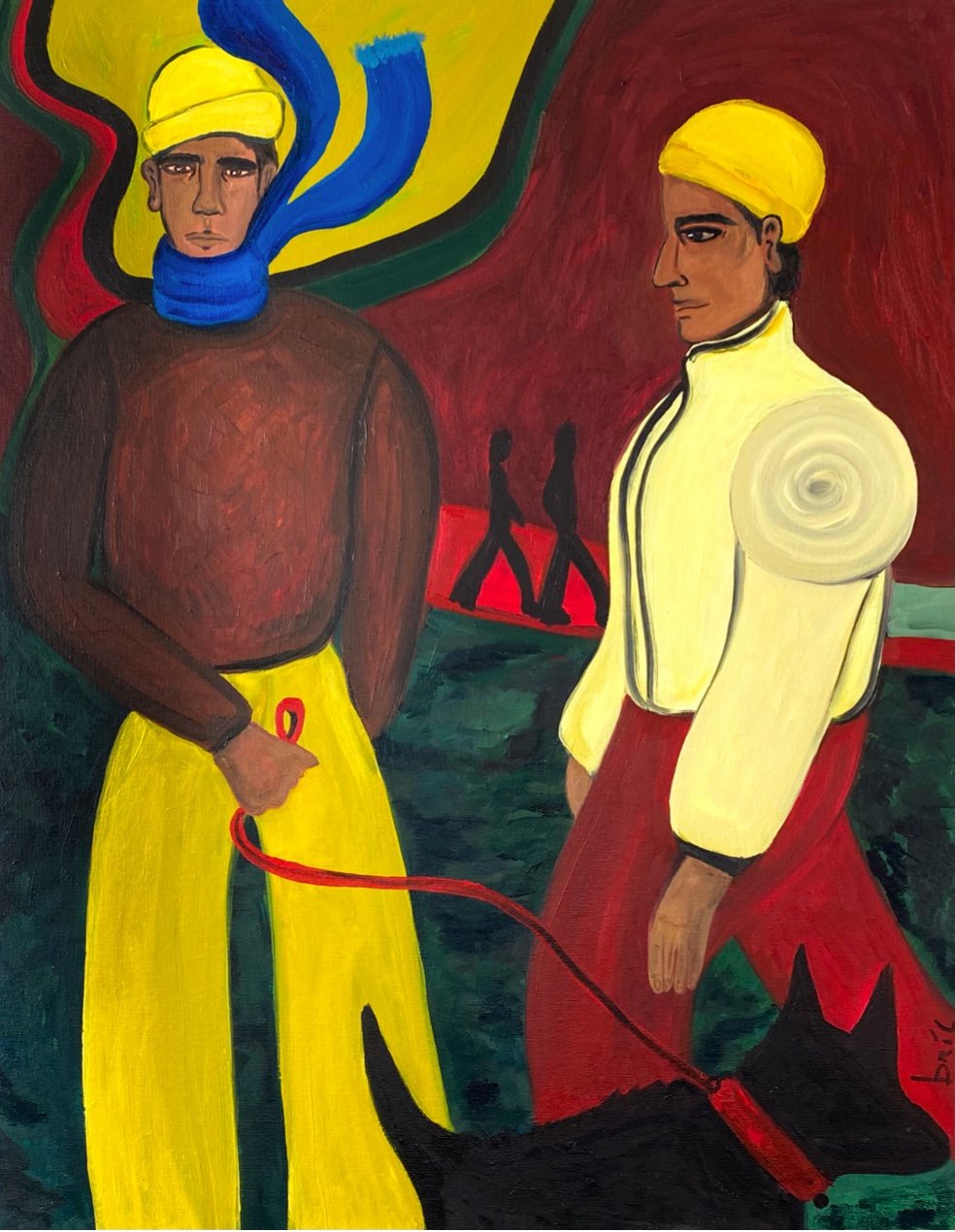 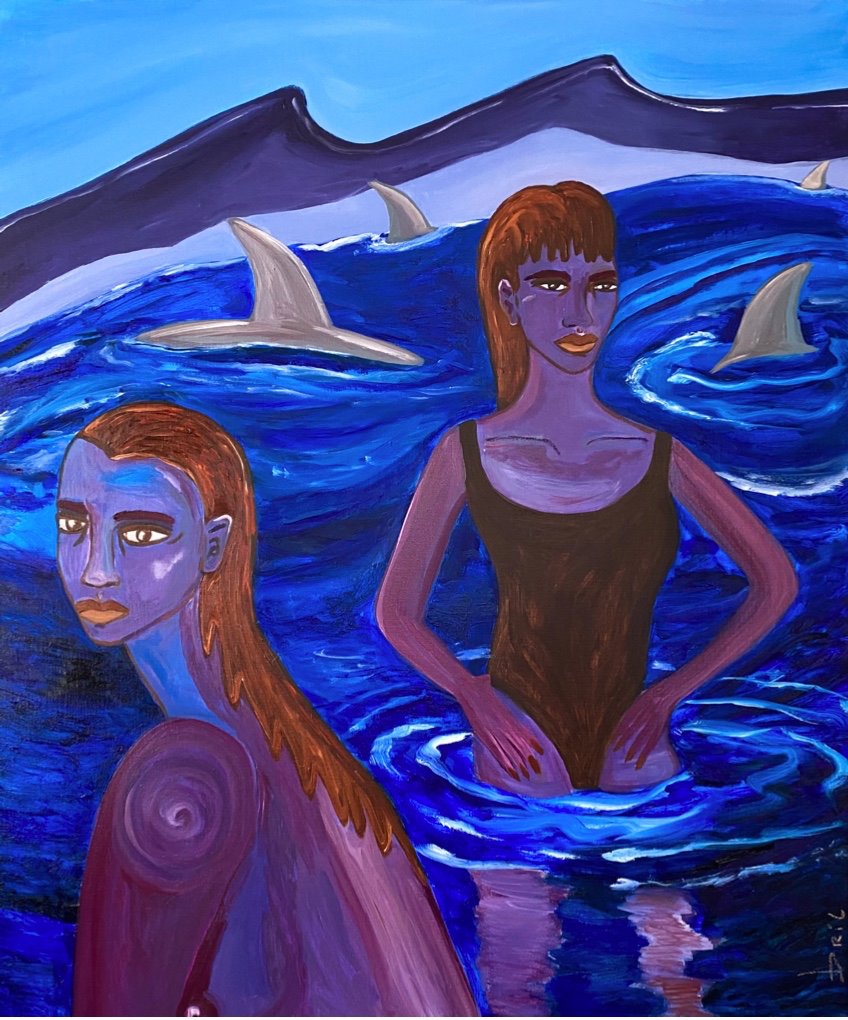 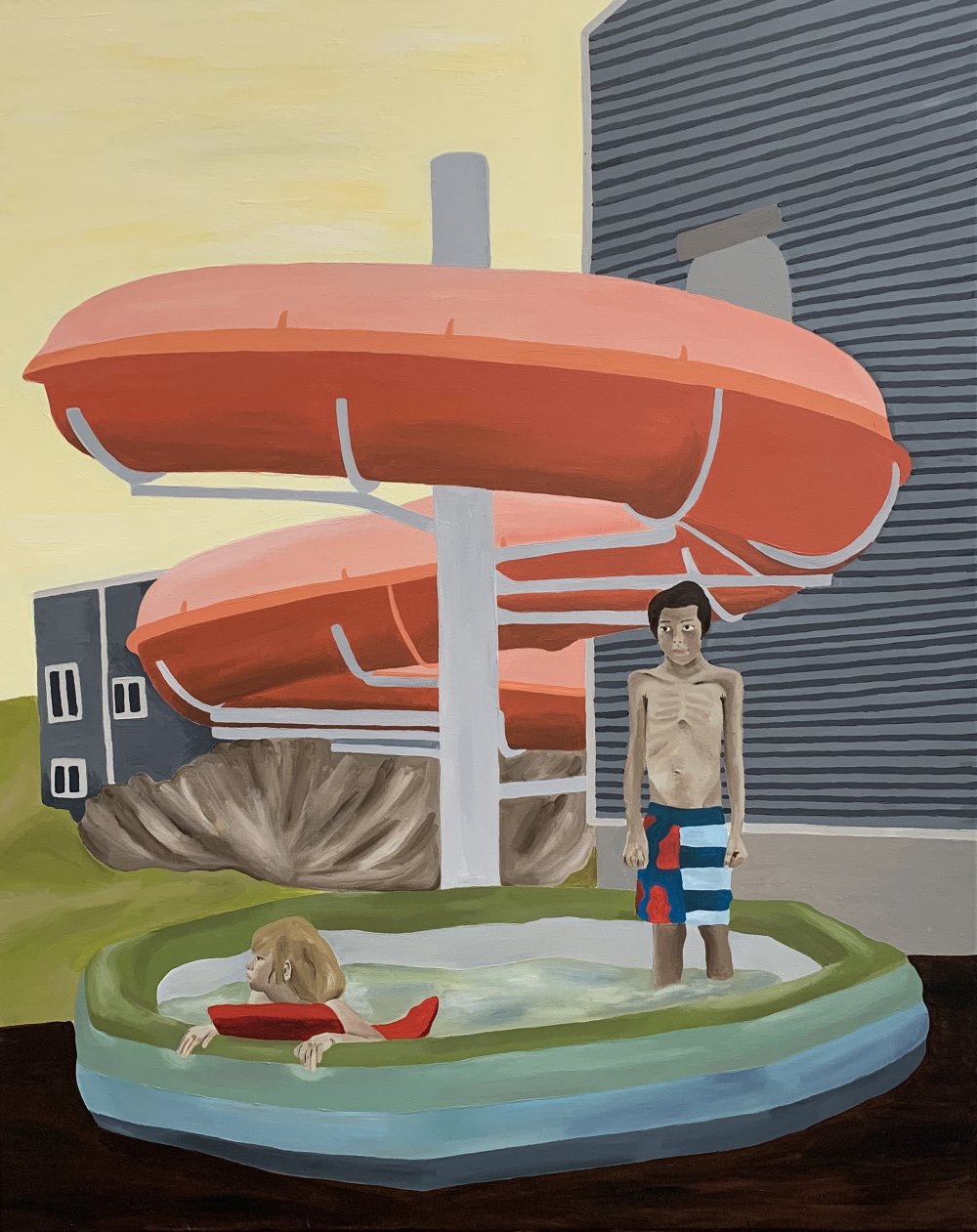 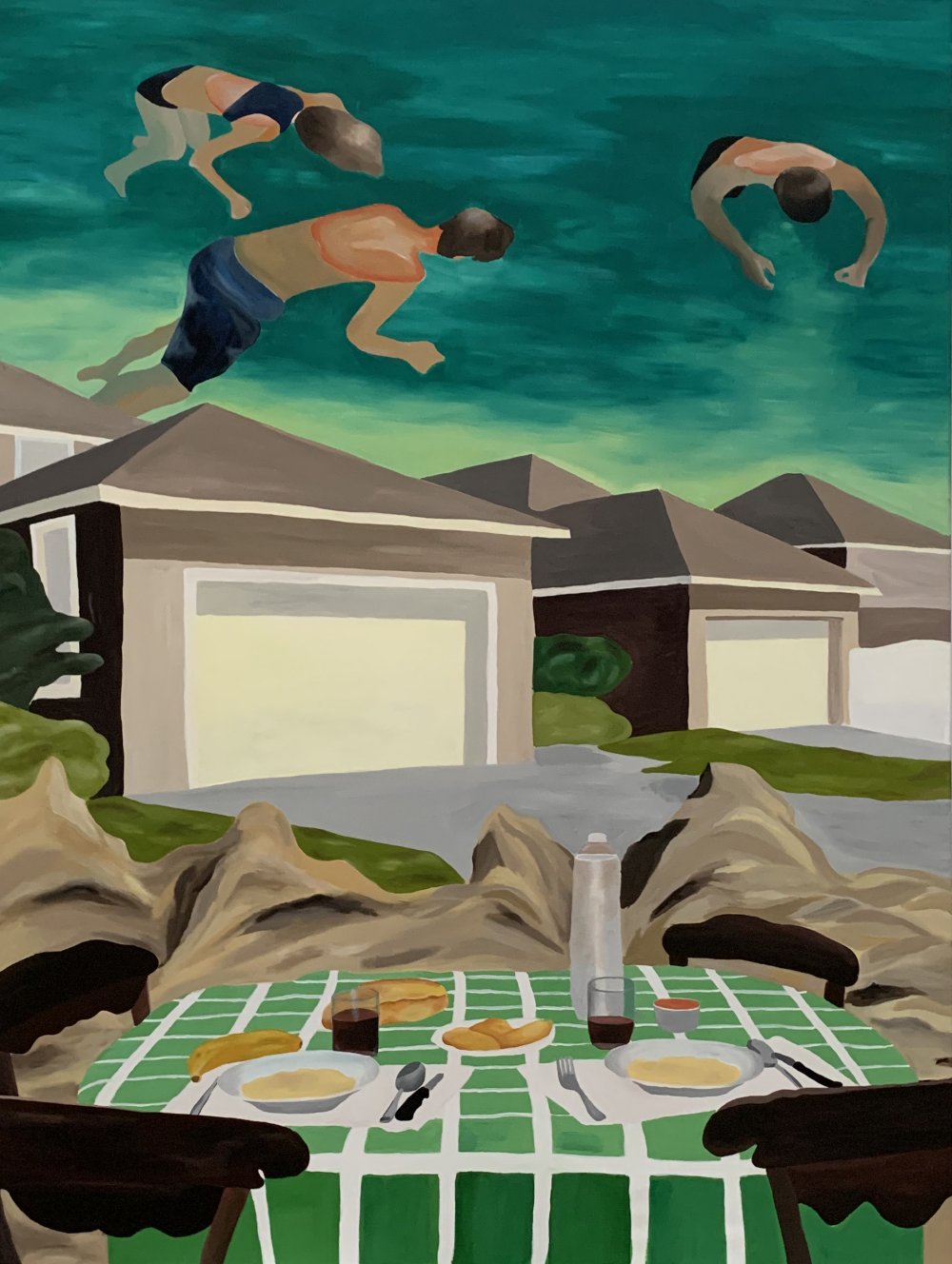 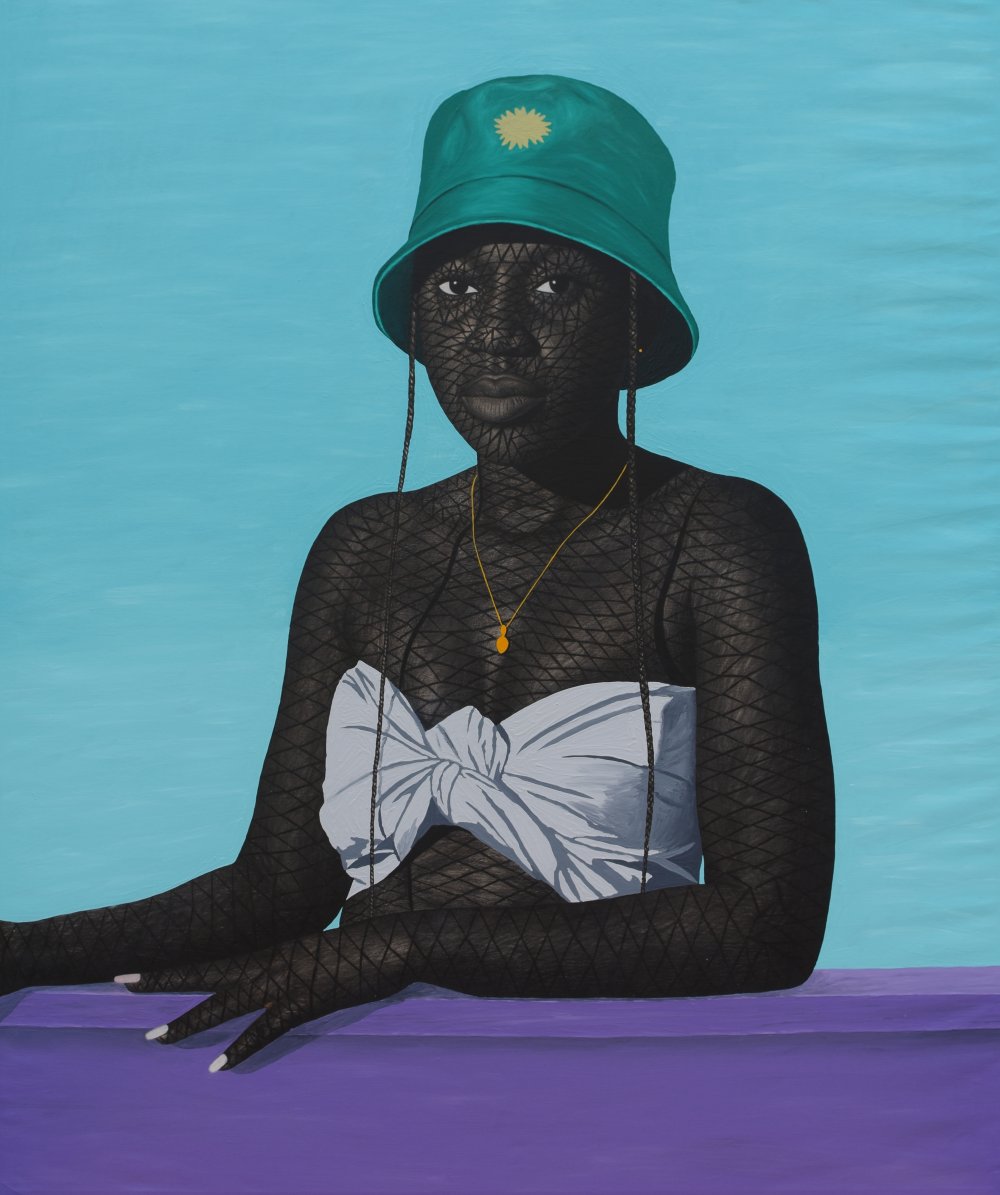 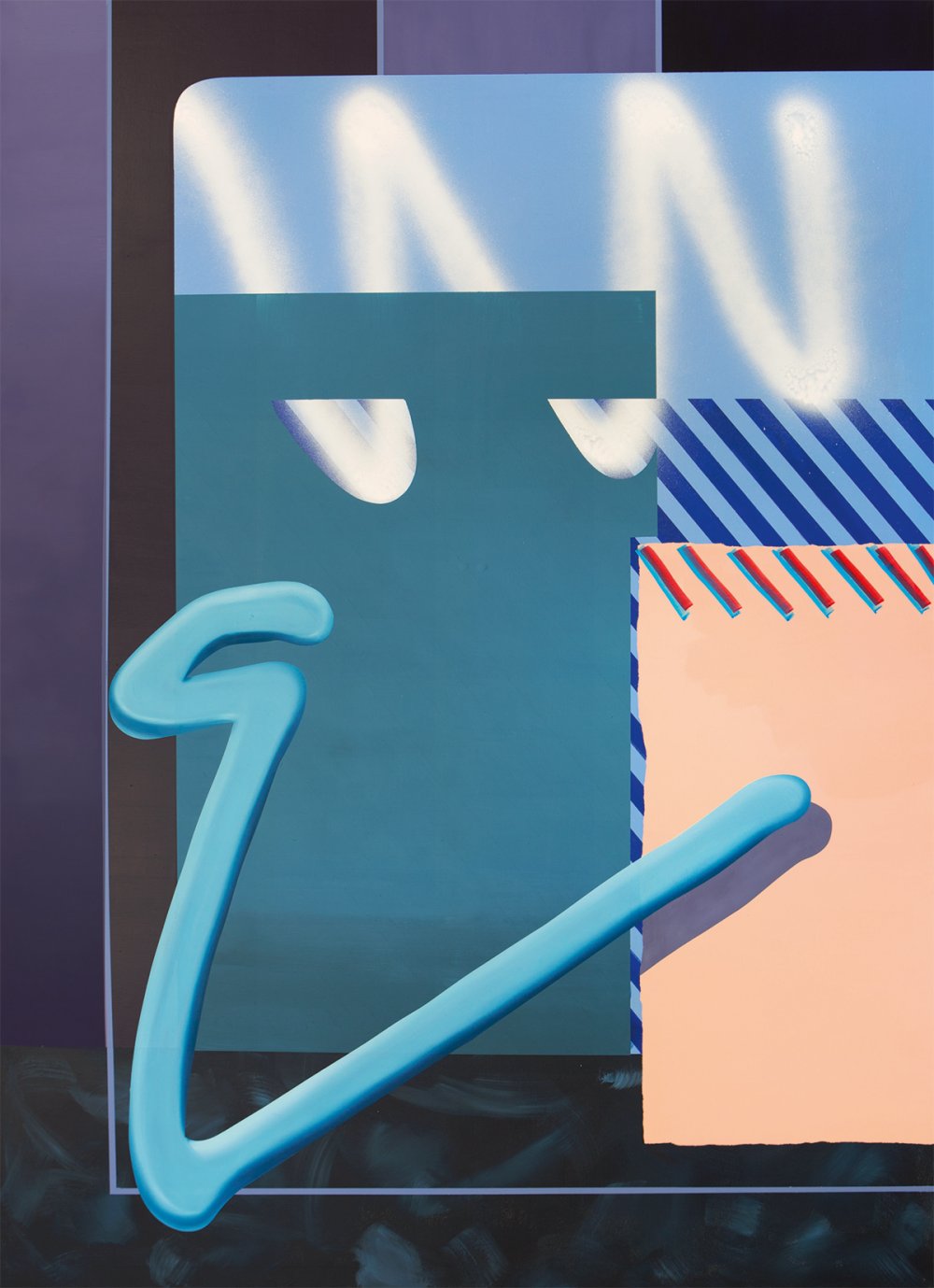 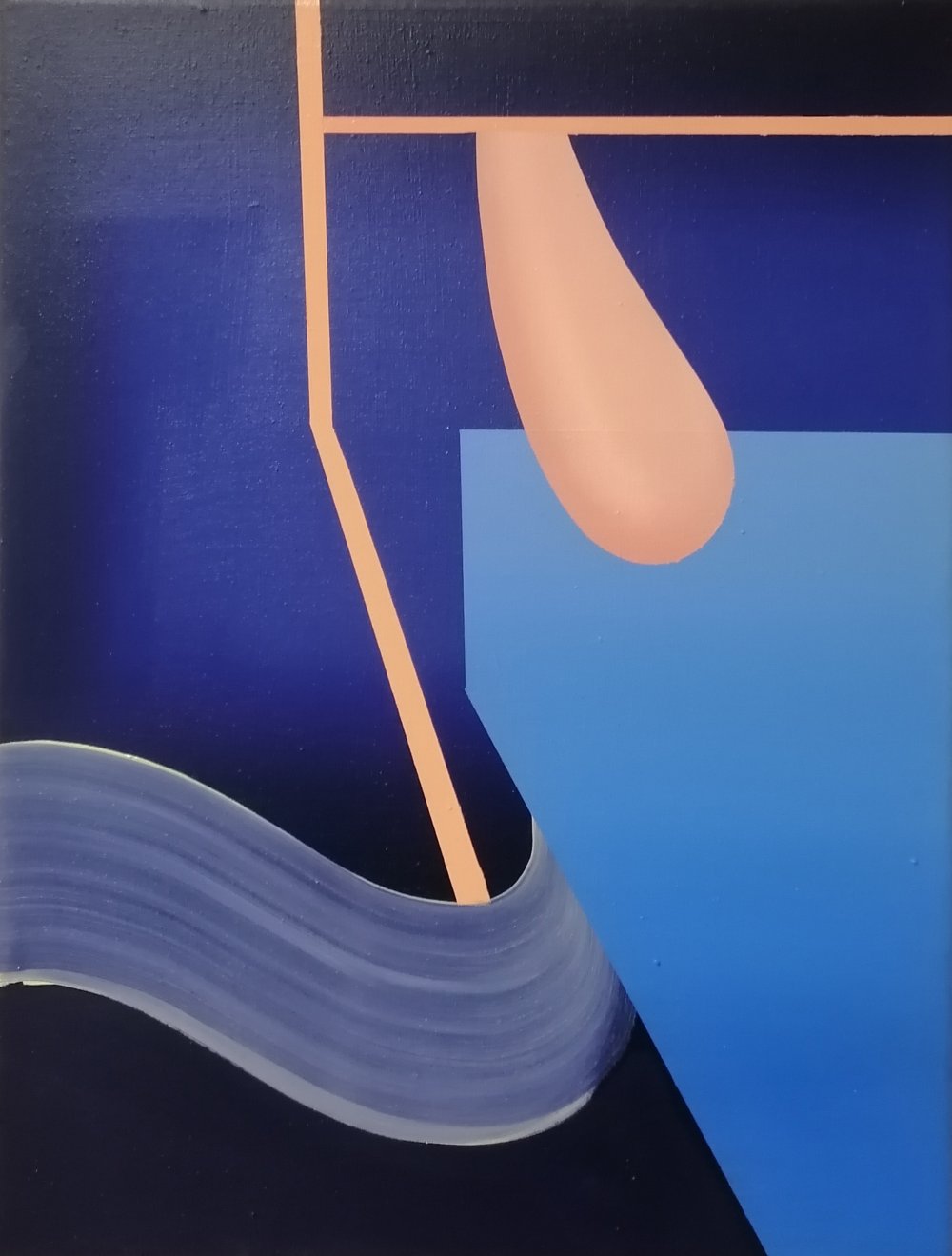 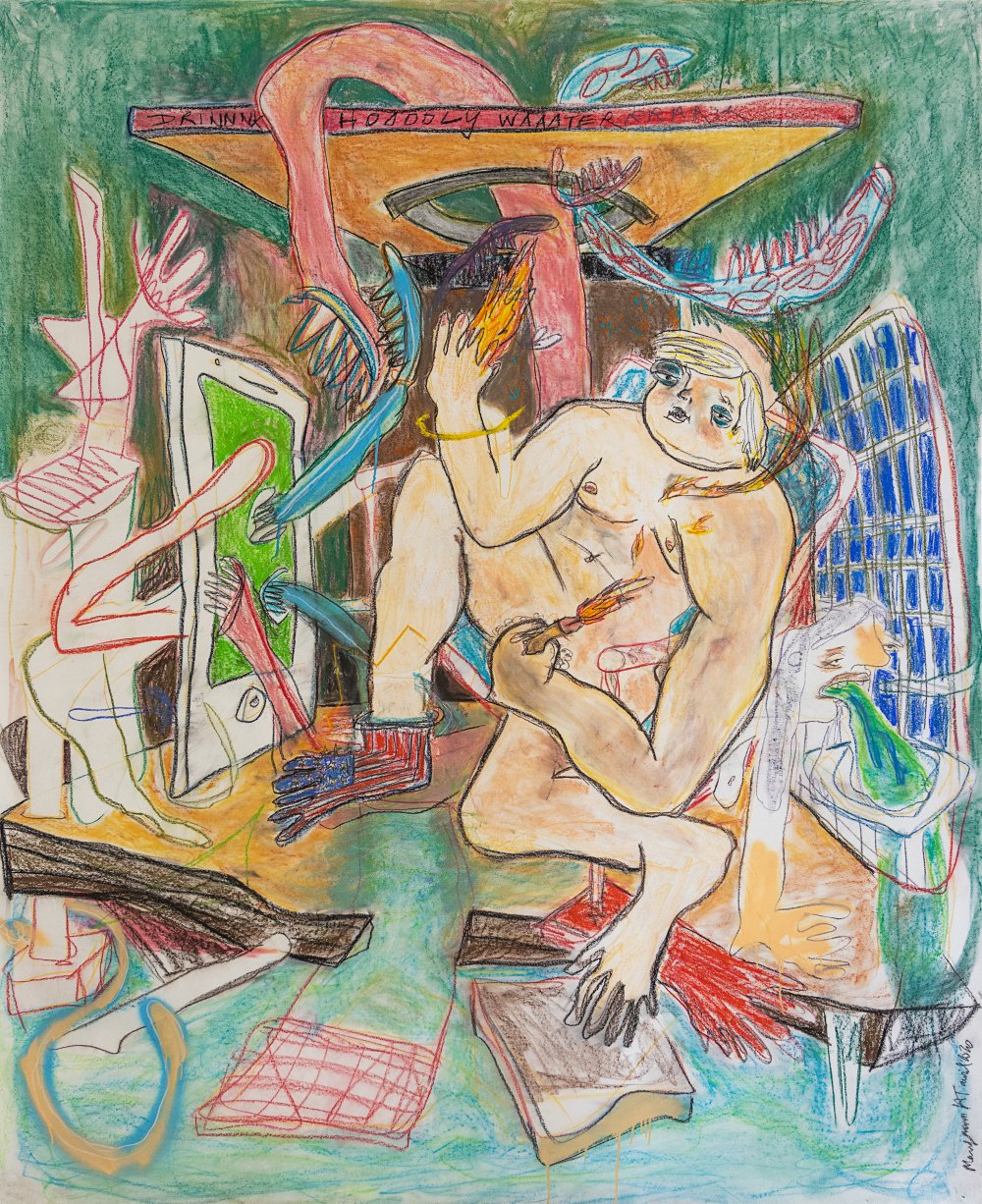 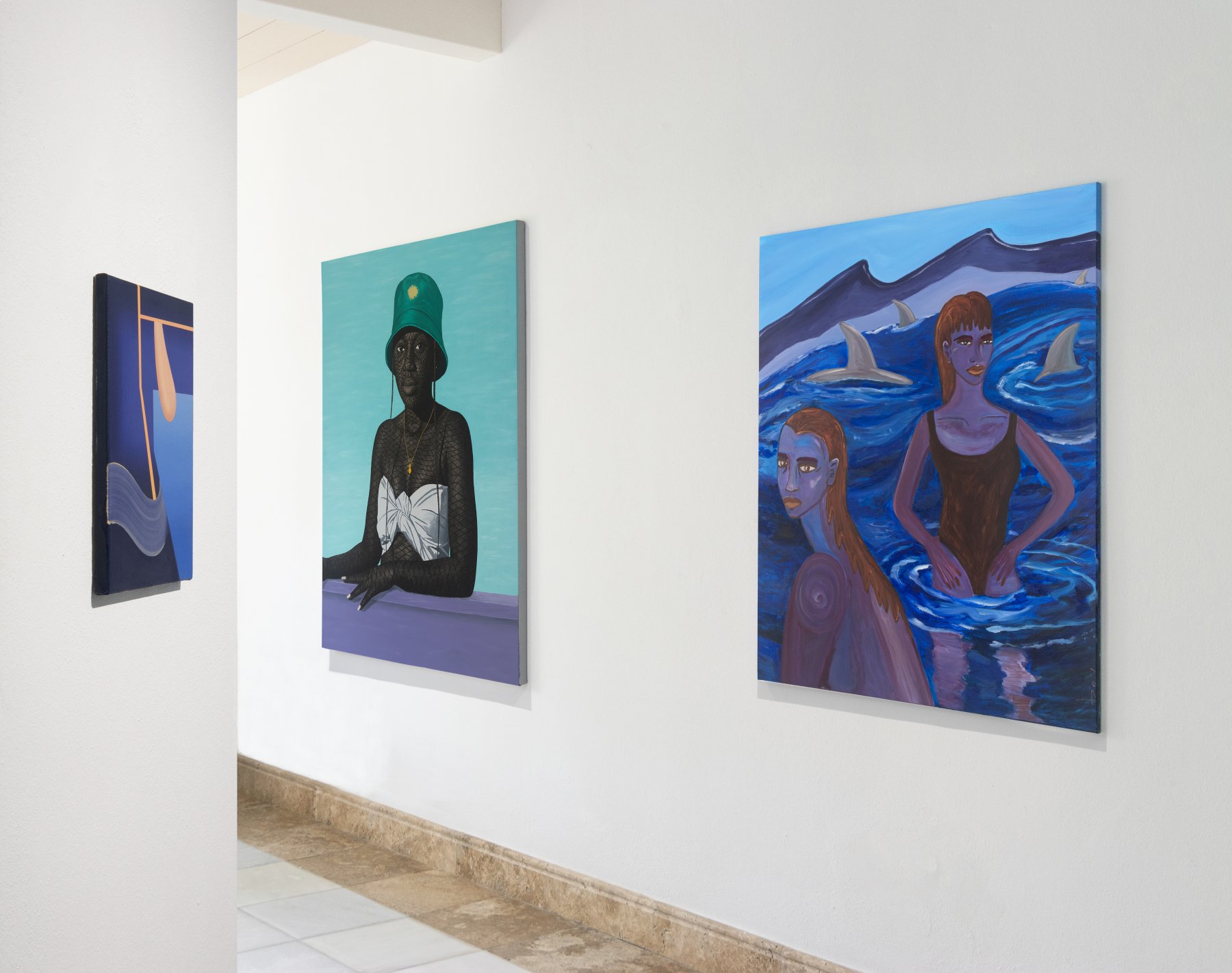 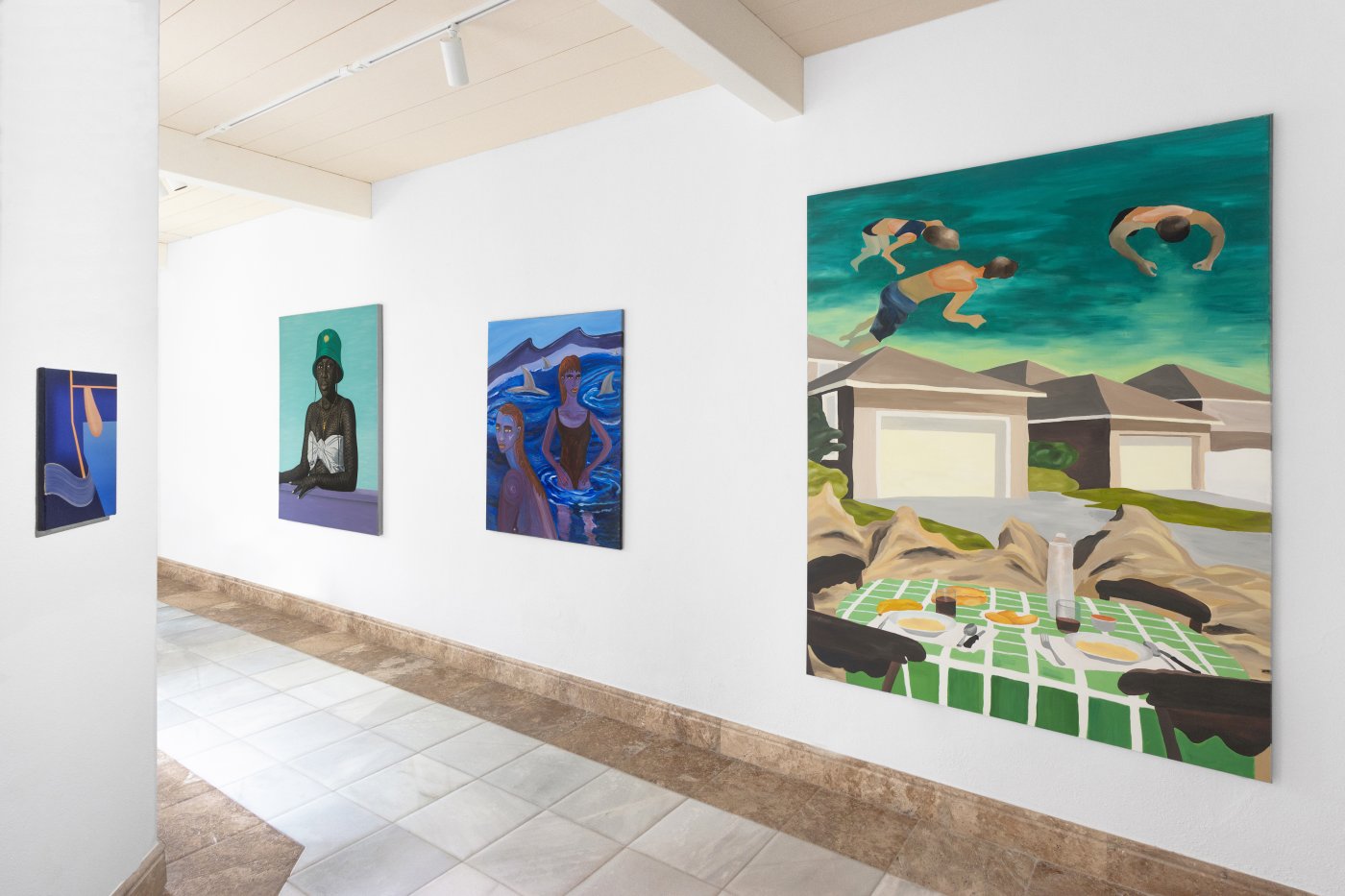 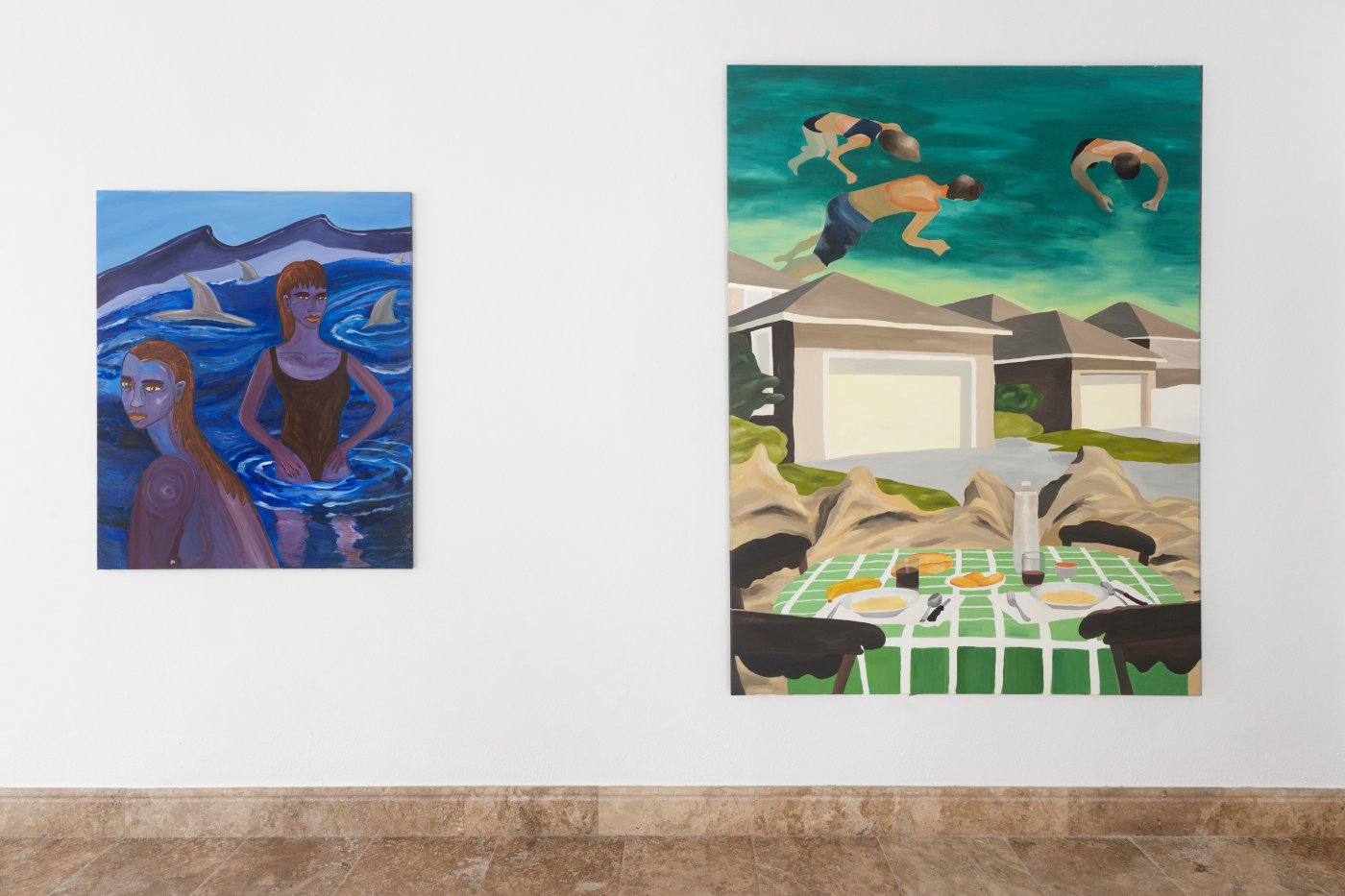 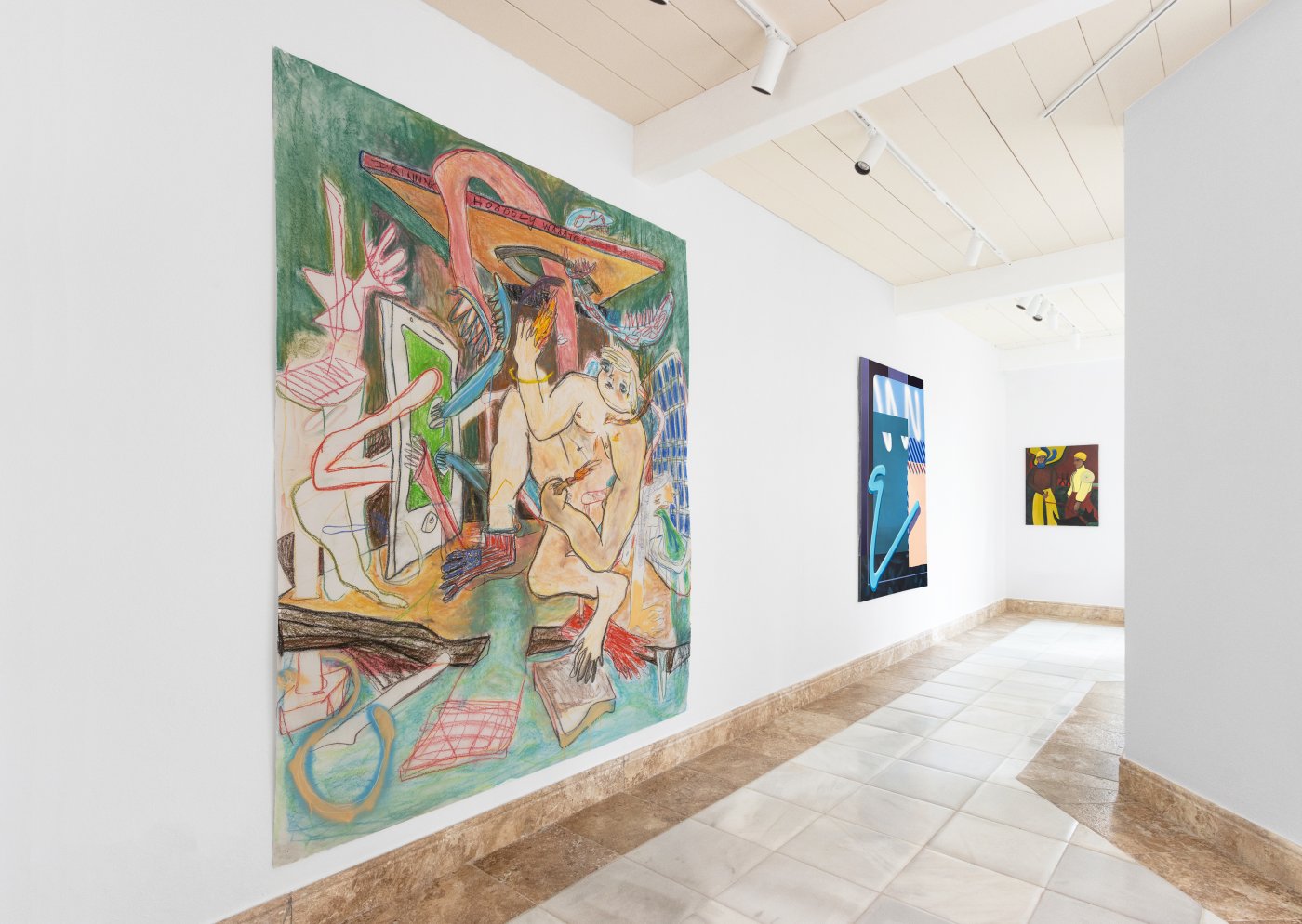 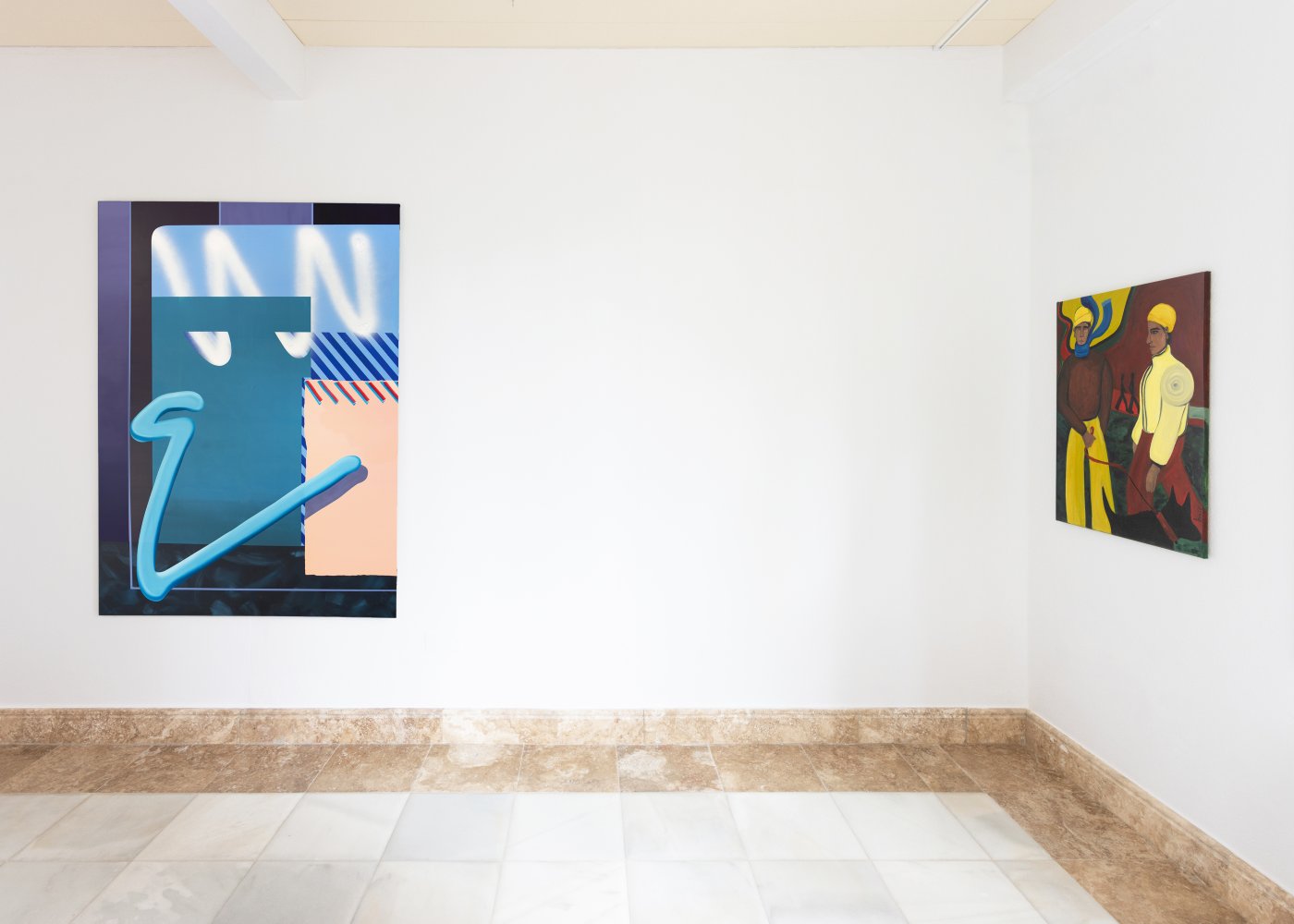 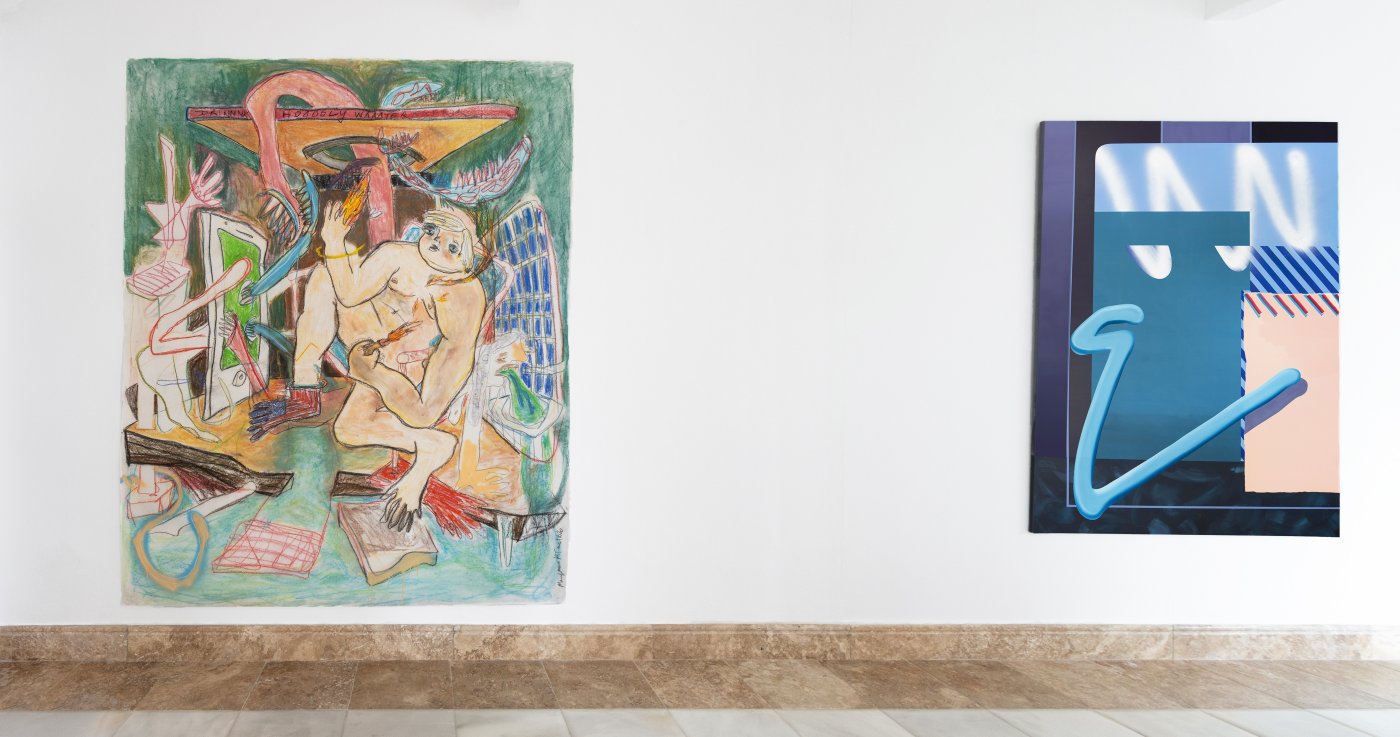 Tosin Kalejaye develops portraits with a particular personal approach to color in his paintings. The artist often plays with the contrast of his naturalistic figure over flat backgrounds where the figures look at the viewer while positioned in unusual spaces. In the painting Aduke’s Summer Vibe the composition is clear and captivates the viewer with the bright colors. The lady’s skin is covered with a net, which irritates by contrasting with the naturalistic representation of the figure. Her grey bikini, gold necklace, green cap, and white fingernails shine in contrast to the woman’s incarnate. The background consists of two plain layers, the light blue and the purple foreground. Tosin Kalejaye deliberately works with the contrast of the beauty of the bodies he portrays and the abstract, colorful surroundings where we found them. The viewer is fixated by the beauty of the figure, but its surroundings are irritated by colorful abstractions in detail. Tosin Kalejaye (1992) is a self-taught contemporary visual artist from Abuja, Nigeria. He focuses his art on the figure, modern society, and the everyday Black experience.

Similar bright colors in the background are taken up by the painter Juliet Casella. Unlike Tosin Kalejaye, links several people in unusual scenes. Coldwater visualizes two figures in a small round pool of water. The two figures are both in the small water area and at the same time seem strongly distanced from each other. A man with a scrawny body is depicted frontally, looking toward the lady in the pool. She is lying on a red air mattress and looks with a cool gaze to the left side. Her face stands out aesthetically in the side profile. Both people are separated and framed by the large orange water slide. Juliet Casella also creates the background with flat colors, but with the depiction of framing architecture. The presumed grey architecture divides the orange slide and flows into the yellow background.

Mortal Dinner is characterized by the combination of three spatial levels like painted collages. In the upper part of the painting three swimmers appear, looking into the water. In the center below them, grey houses are painted, consisting of plain surfaces. The viewer is introduced to the painting by a table with four chairs set for two people. Around this table appears a brown area that looks like mountains. Juliet Casella develops mystical, surreal imagery that conveys an eerie mood. The artist emphasizes this through a lack of shadows and a colorfulness reminiscent of metaphysical painting. Juliet Casella (1993) graduated from the Paris-Cergy National School of Arts in 2017.

Ella Bril’s paintings focus on depictions of large, colorful figures in strange narration and emotionless facial expressions. Crossroads shows two large men in the foreground. The figure on the left looks out of the painting and is anchored within the composition by a particular variety of colors. The bodies are worked out in a shadowy way and captivate much more by the combination of color contrasts. The left figure is walking with a dog, which seeks dialogue with the right figure. This man is painted from the side and seems to walk through the picture without expression. Between the two figures, two other small people appear as black silhouettes in the background.

Feeling Surrounded shows two ladies in the sea surrounded by a group of four sharks. The picture captivates by the different blue tones of the water surface in contrast to the violet incarnate of the two women. They look strikingly, statically out of the picture and seemingly suspect nothing of the looming danger in the background. Ella Bril (1996) is a Dutch contemporary artist who composes figurative scenes with bright color contrasting, reminiscent of the painting palette of the Fauves. The faces of the characters are worked out emotionless and unreal, creating a mystical atmosphere of distance within the composition.

Derrière la Grille l’eau sainte te lave les pieds (Behind the grate the holy water washes your feet) by artist Margaux Henry-Thieullent visualizes in a similar way to Ella Bril the body within a surface and a hard black contour line. The painting shows a chaotic, living state in the interior. The large nude figure in the center of the painting seems to be squeezed into the small space. Around this figure, hints of other figurations appear. The artist shows in gestural, drawing manner body fragments, which make the image structure difficult to read. Next to the central person in the middle of the picture, a lady is vomiting to the side. The central figure touches with his left penis spitting fire, which is represented in the dialogue of his right hand with fire. Margaux Henry-Thieullent creates wild figure paintings whose narration is not directly legible. Her art is close to the expressionists Max Beckmann, who, similar to her, positioned shadowy figures in oppressive tight spaces. The graphic contouring of the bodies underscores the lively mood in the painting. Margaux Henry-Thieullent is a French multidisciplinary artist. Her hybrid practice is a permanent dialogue between videos, painting, digital drawing and installation.

Anna Nero’s paintings are different from the previous positions due to the concentration on small details and abstract composition. The artist does not develop individual portraits of figures in the works Reocurring Annoyance and Ripened Fruit. She paints spatially appearing surfaces, which are interrupted by abstract forms. Nero starts her paintings with a geometrical structure in various colors. She breaks the strict composition with gestural lines. Her body seems to be part of this movement and creates an aesthetic contrast to the background. To emphasis the different dynamic layers she is using acrylic, oil, spray cans and markers. Special in her art is the colored plastic elaboration of the elements in the picture. She also thematizes the application of color in her painting. Both works play with the perception of the viewer. With a closer look the artist is offering us spaces that lead us into the work. We can follow the shapes in the structures, without telling us where they are coming from.
Anna Nero simulates spatiality through different levels of color within a digital aesthetic, which she visualizes analog. The artist Anna Nero (1988) lives and works in Frankfurt am Main and Leipzig. She studied painting at Art Academy Mainz, and Art Academy Leipzig, where she earned her MFA in 2015.