Omer Tiroche Gallery presents Wangechi Mutu: Drawing Poems, an exhibition that brings together key pieces from the artist’s early collages, a medium which continues to be at the forefront of her work. Though initially trained as a sculptor and multimedia artist, Mutu found public acclaim in the early 2000s for these collages, which centred on the female body and on perceptions of femininity. Originally, she referred to these as ‘drawing poems’. 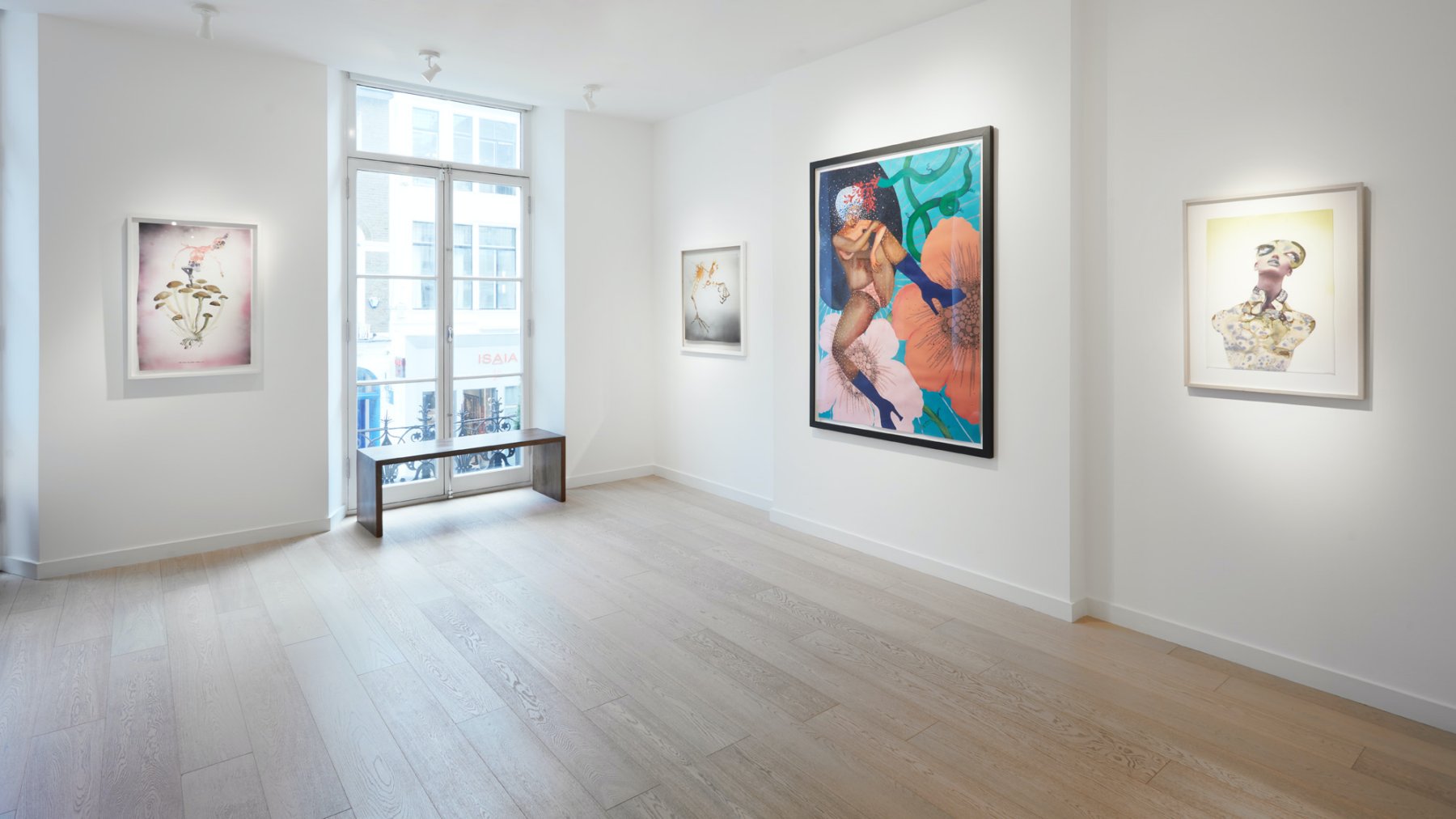 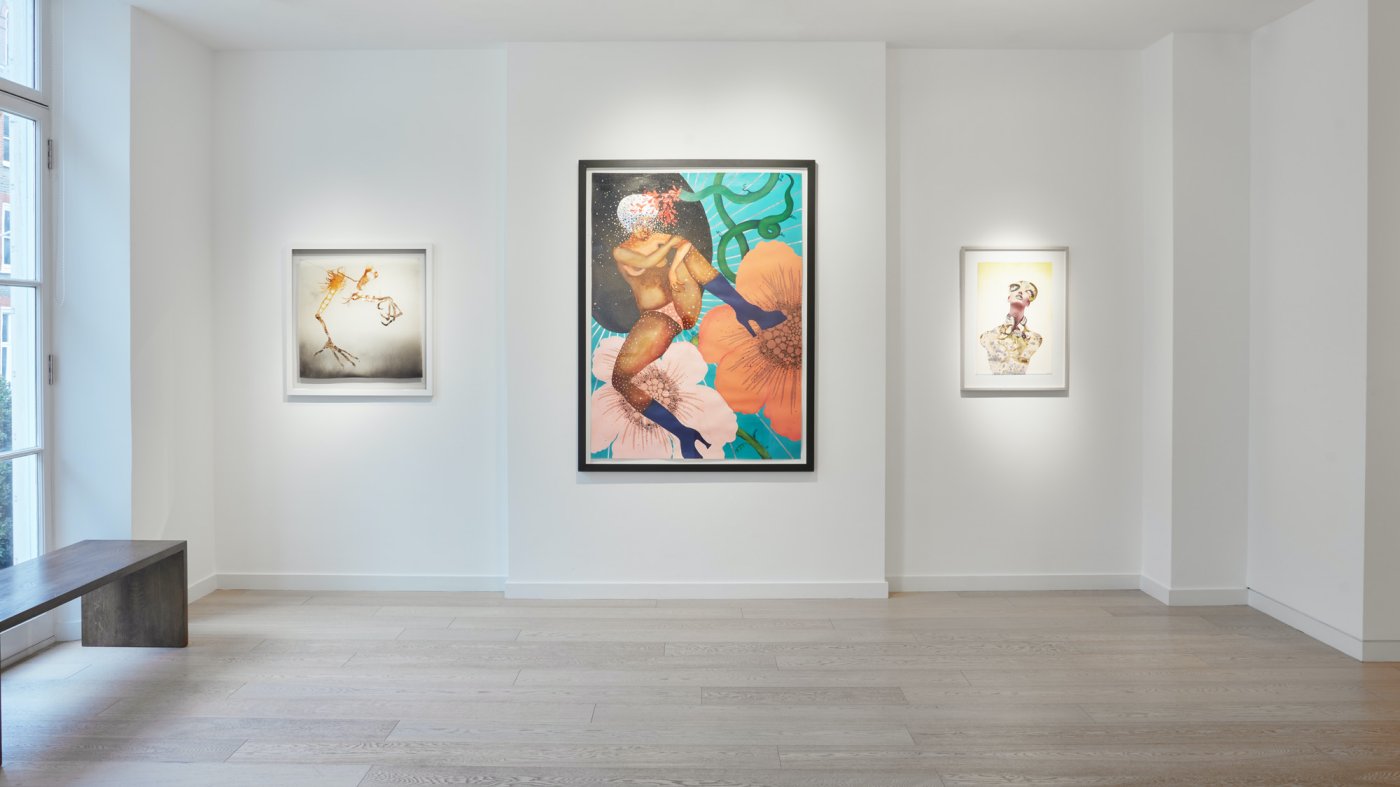 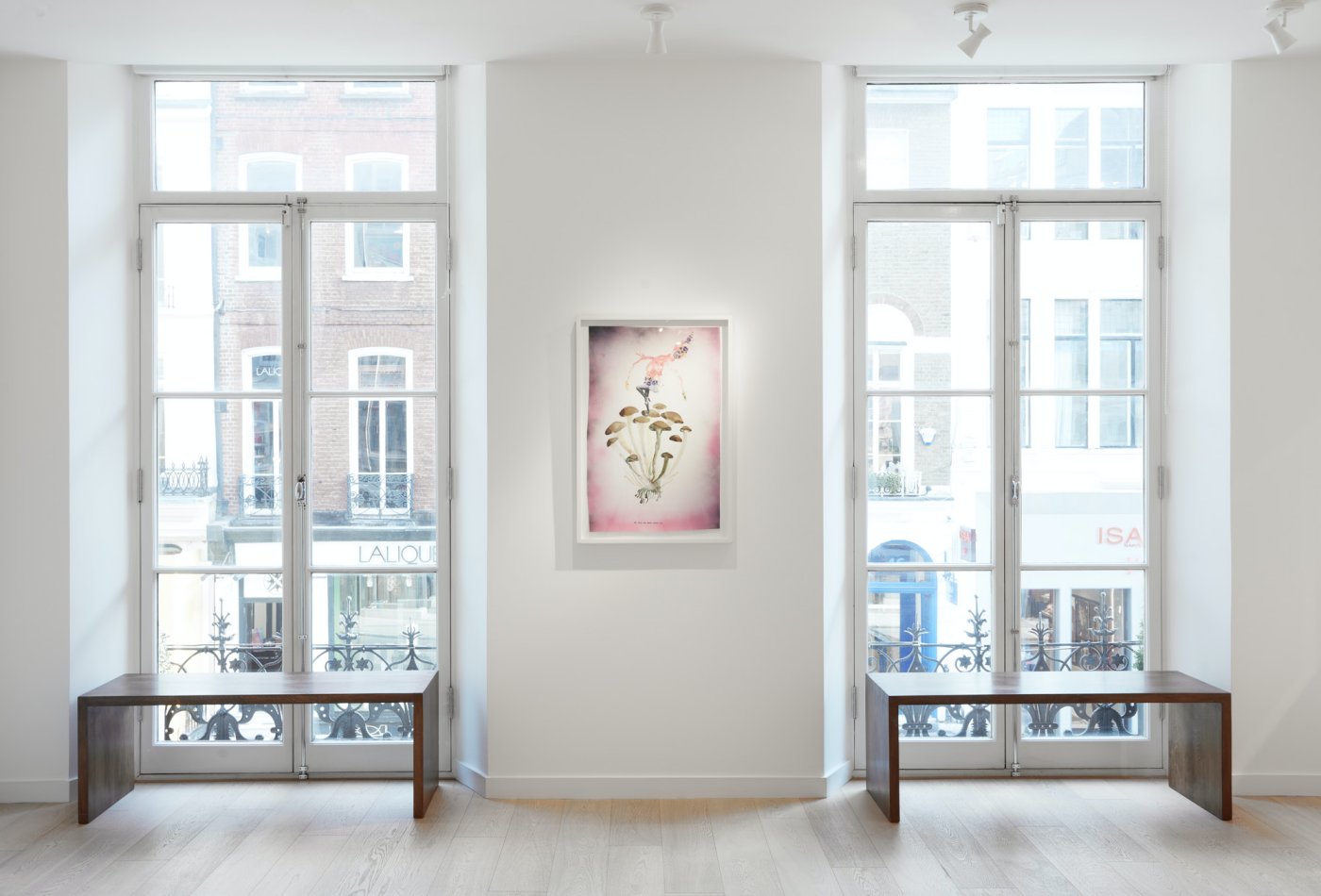 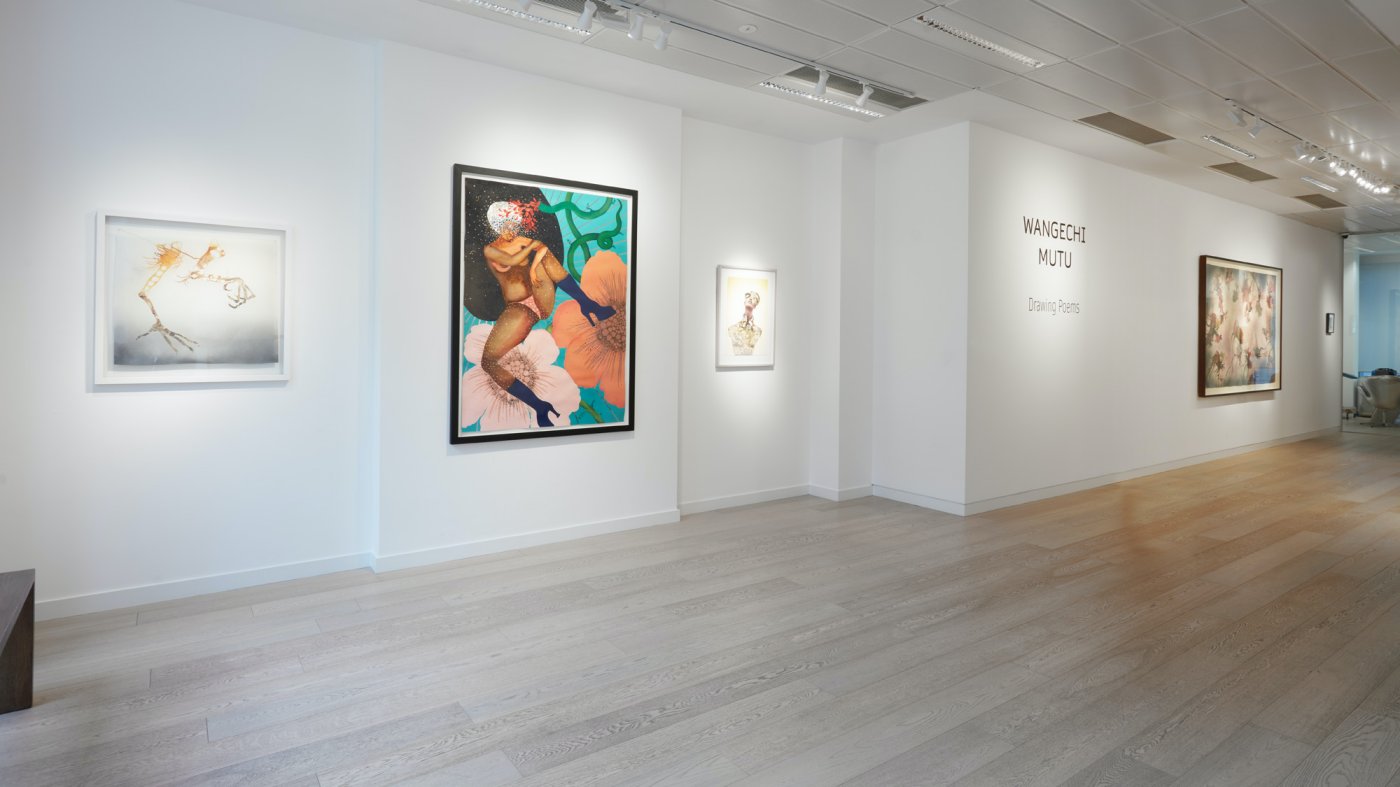 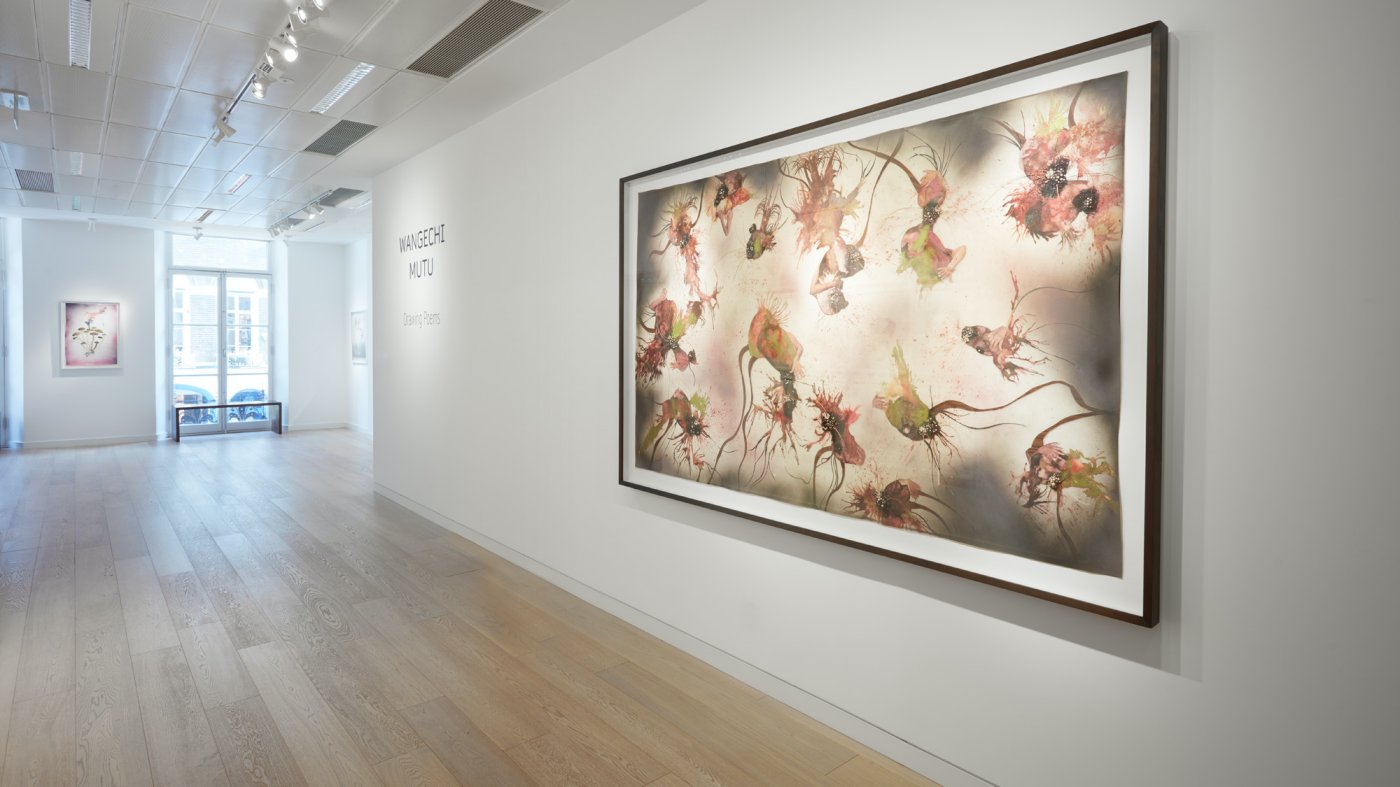 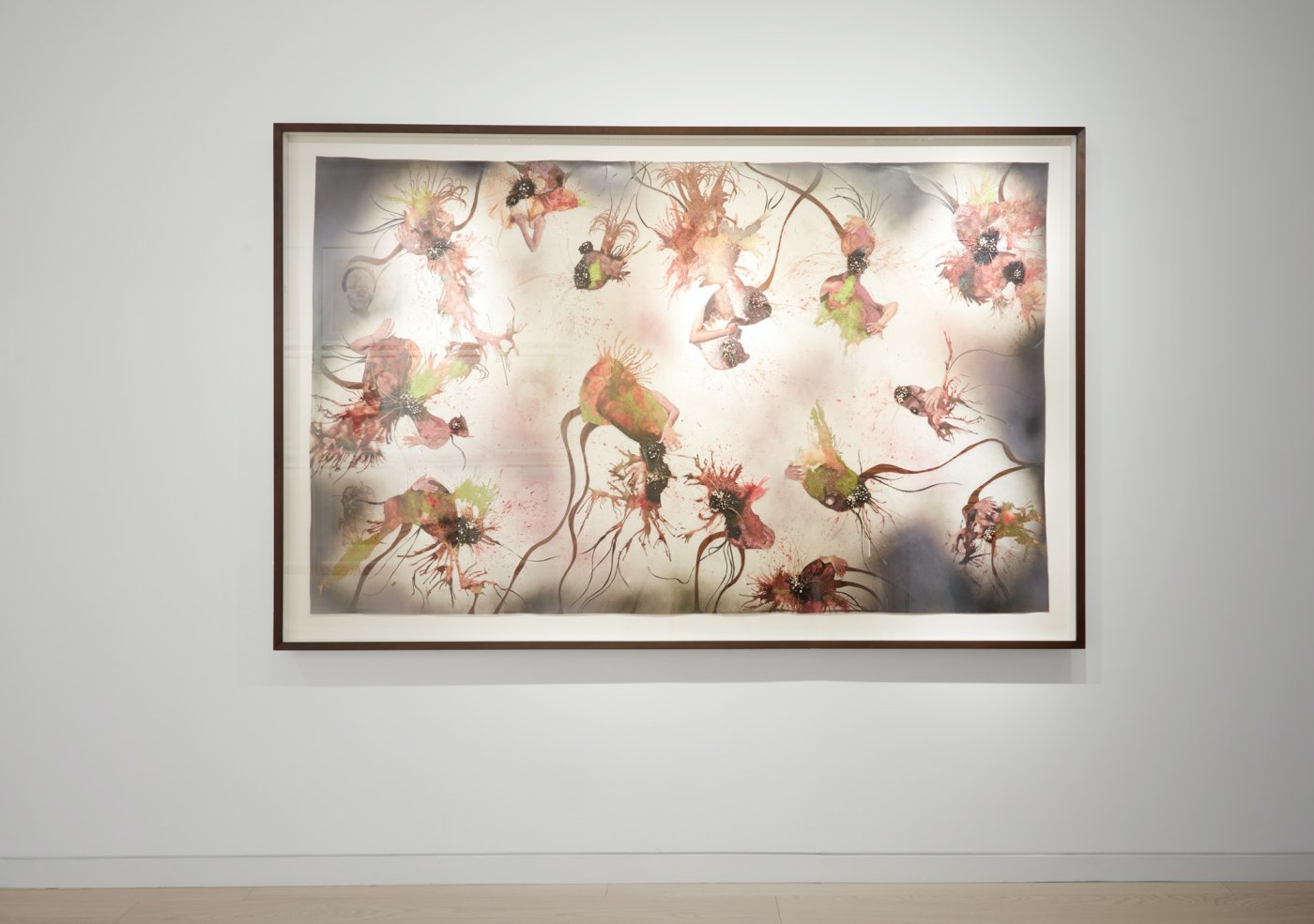 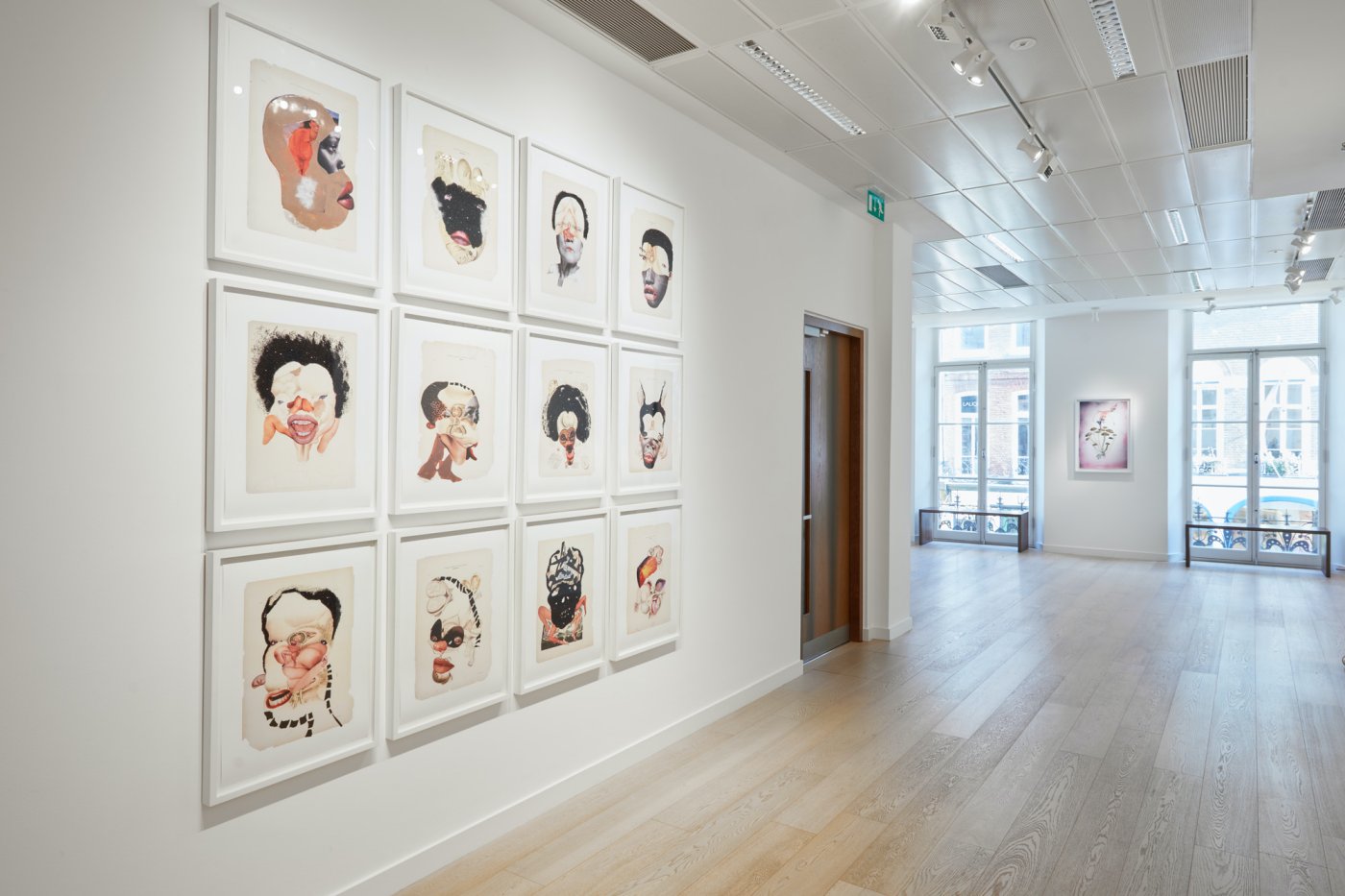 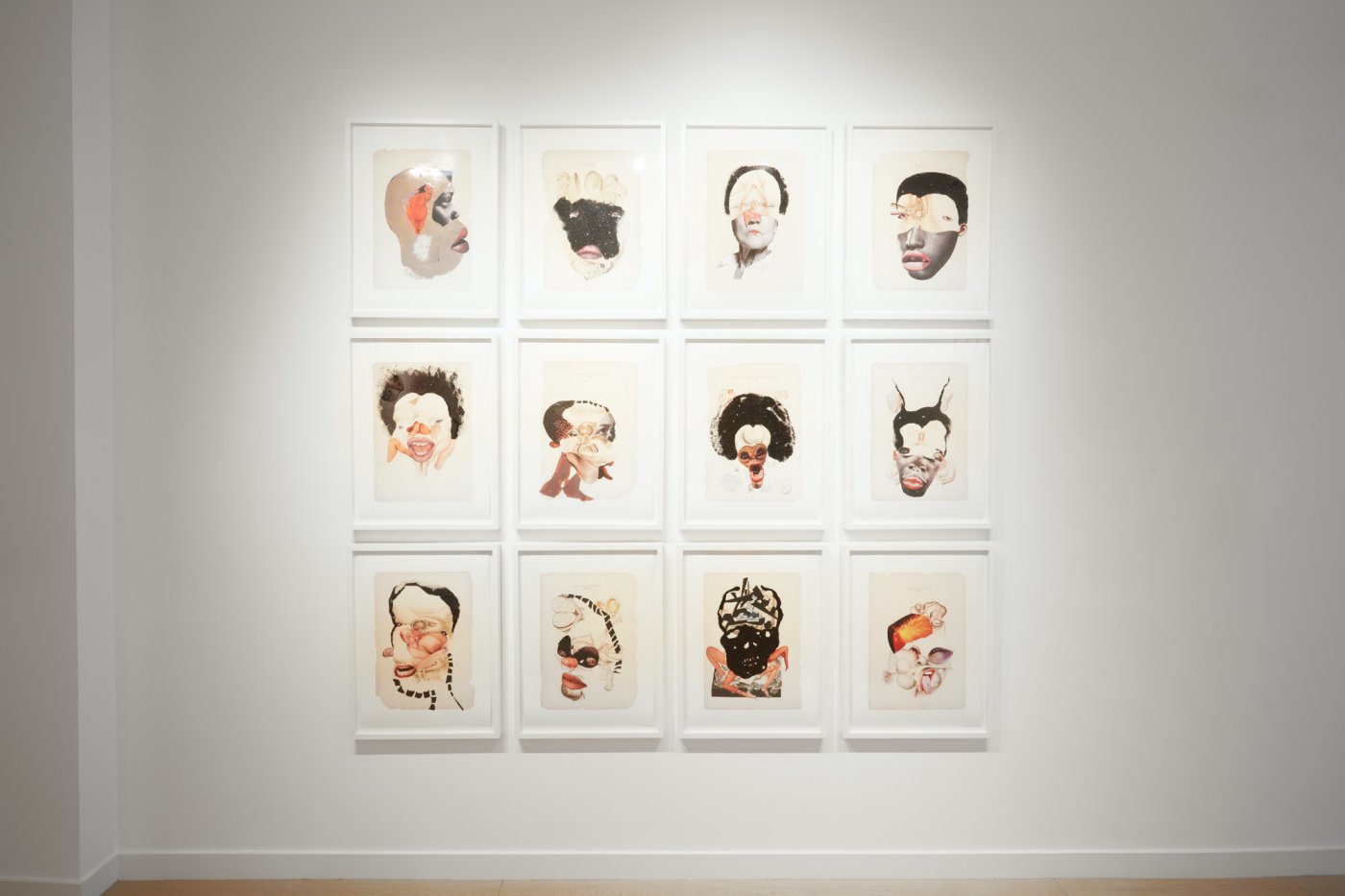 Mutu moved to New York from Nairobi in the early 1990s to study Fine Art. In 1996 she received her bachelor’s degree from Cooper Union and later went on to obtain her master’s at Yale University in 2000. During this time, Mutu began to move towards collage, creating her first series, Pin-Up, in 2001. Influenced by the violence in Sierra Leone, these works centre on elegant, ethereal women with injured or traumatised bodies who directly engage with the viewer. Though inspired by a specific event, Mutu uses the female body as a reflection of cultural aggressions, like obsession with beauty and physical mutilation. In Annabelle, 2001, Mutu presents a woman posed against a bright, floral background. From the waist down, she exists within an alluring, glittering world; her head, however, is situated in a dark void where a severed vine gushes blood.

Mutu has connected her collages to an expression of post-9/11 fears in New York. Cutting and distorting her figures was a way of expressing the trauma and anxiety of the moment, especially as a recent ‘immigrant’ in the city. She would continue to experiment with these themes throughout the 2000s, creating collages that utilise science-fiction-like imagery in order to subversively inscribe meaning onto the female form. Through her figures, she offers a critique of issues of race, politics, gender, identity and environmentalism.

Through these works, Mutu proposes a different version of the world and how humans can exist within it. In this sense, she has frequently been connected to the Afrofuturist movement, a multi- disciplinary aesthetic that theorist Alondra Nelson describes as a way of exploring the intersection of technology and Black culture in order to challenge mainstream assumptions of a raceless future.

Several of the works in the exhibition are executed on Mylar, a type of polyester film that is an important medium for Mutu and has become an iconic feature in her work. She values it for its synthetic quality and objectivity, commenting that with Mylar, she has less control over the final appearance of the work. Mylar is used in Cassandra, 2007, where Mutu represents a group of alluring and alien organisms with feminine arms. Reminiscent of phytoplankton viewed through a microscope, the creatures float against a marbled background that allows the viewer to draw connections to both the past and the future.

The elements for these collages are taken from diverse media, including fashion magazines, traditional African arts and medical diagrams, but Mutu doesn’t restrain herself to printed material. She embellishes the surfaces with additional elements including synthetic hair, plastic pearls, plant material and sand before adding her arresting ink drawings. These disparate elements come together to create images with multiple, mutable meanings.

Mutu lives and works between New York and Kenya and enjoys international success, with recent exhibitions at the Institute of Contemporary Art, Boston; the Metropolitan Museum of Art, New York and the Staatliche Kunstahalle Baden-Baden, among others. This year, her work was featured in a solo exhibition at San Francisco’s Legion of Honor.

Courtesy of the artist and Omer Tiroche Gallery